The land of Rajasthan is known for its rich cultural heritage. A favorite among tourists, the folk culture of the land including but not limited to dance, music, food, and literature is very popular. The centuries-old folk dances of Rajasthan are a class apart. They are full of energy, grace, spectacle, and above all a sense of celebration.

Rajasthan is also known for its royal history; it has been home to some of the most powerful warriors and rulers. These rulers patronized the art and culture of the state and this led to the growth of the folk culture. Folk dances of Rajasthan are usually performed during festivals, cultural gatherings, and functions. When it comes to celebrations, I doubt if any other culture is more vibrant and livelier than the culturally rich state of Rajasthan. Accompanied by an equally rich folk music culture, the folk dances of Rajasthan have gained international recognition.

Here is a list of some of the most mesmerizing folk dances of Rajasthan that will make you fall in love with the state’s cultural treasure.

This form of dance is performed by the nomadic tribe of the same name. It is one of the most celebrated folk dances of Rajasthan. It is also known as the ‘Sapera’ dance, owing to the sensuous serpentine movements of the dancers. This breath-taking form of dance is performed by women who wear a traditional jacket called angrakhi, an odhni, and a ghagra. Several local musical instruments such as dholak, dufli, pungi, morchang, khanjari, etc., are used for the music to this dance form. 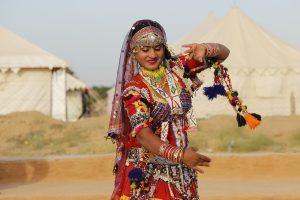 The famous puppet dance of Rajasthan was bound to be on this list. The Bhat community of Rajasthan started performing this art form some 1000 years ago and it still hasn’t lost its charm. Kathputli comes from kath meaning wood and putli meaning doll. The puppeteers not only control these puppets with strings but also sing tales of Indian mythology and various folk tales. Nowadays the subject material has transgressed the ancient usual and various social issues are being dealt with through the Kathputli dance. The size of these puppets goes up to half a foot and they are heavily decorated thus adding to the beauty of the show. 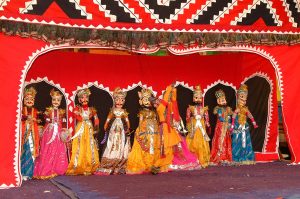 This unreal-looking form of dance takes a lot of skill and practice to master. It involves women carrying several earthen or brass pitchers on their heads and twirling around. Sometimes they do this while balancing on iron nails, metal plates, broken glass, and literally the edge of a sword! Superhumans, or what? These performers are accompanied by male musicians who play instruments like dholak, jhanjhar, and sarangi. Interestingly, it is said that this form of dance was inspired by the women who used to carry several pots of water on their heads and walk miles across the desert. 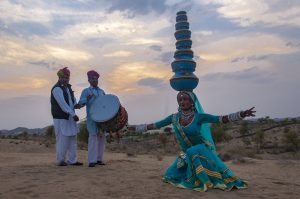 Gair Ghumna is one of the most popular folk dances of Rajasthan. Mostly performed by the Bhil community, this is prominently found in the Mewar region of Rajasthan. It is performed during the festivals of Holi and Janmashtami. Men wearing long pleated tunics and women in ghagra choli move around in circles, clockwise then anti-clockwise. They form intricate patterns and formations. They carry sticks called ‘khanda’ which are cut out from the Gundi tree; they may also carry arrows and swords. This form of dance is a major crowd-pleaser. 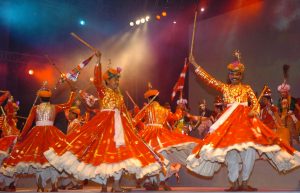 The men of the Shekhawati region of Rajasthan perform this highly entertaining folk dance. A dummy horse made out of bamboo and paper is tied around the waist of these dancers. They dance around and have mock fights that depict folk tales about the local bandits. The tune of a flute and a dhol is usually used during this performance. It is basically performed as a form of entertainment at social gatherings such as weddings. 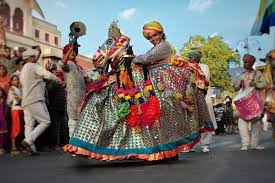 Chang is actually the name of the instrument that is used to create music for this dance form, hence the name. This fascinating dance form sometimes involves men dressed as women as they perform a highly upbeat performance that is exciting to watch. It is usually performed from the start of Maha Shivaratri to the festival of Holi. It is one of the best folk dances of Rajasthan that is specific to the Shekhawati region that is in the towns of Bikaner, Churu, Sikar, and Jhunjhunu. 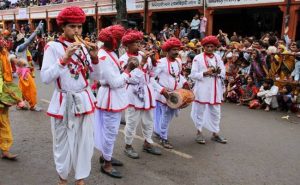 Undoubtedly one of the most popular folk dances of Rajasthan, Ghoomar is simply spectacular to watch. Just picture Deepika Padukone dancing to the song ‘Ghoomar’ in the movie Padmaavat. It is characterized by the graceful swaying of the hands and elegant spinning while adorned with a heavily embellished ghagra (long skirt). The skirt whirls around presenting a beautiful canvas of colorful embroidery and mirror work. The name itself suggests a spinning or circular movement. This form of dance takes place during auspicious occasions and festivals, specifically at the arrival of a new bride to a household.  It was introduced by the Bhil tribe of Rajasthan and was hugely popular among royalty. 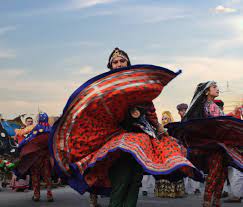 This form of dance is quite interesting as it involves 13 brass discs tied to different body parts of the dancers. Their movements allow the discs to collide with each other and the sound produced is the rhythm that helps them dance. The dancers may also hold swords in their mouths and balance pots on their heads which makes this dance even more engaging to watch. This is mainly performed by the Kamada tribe of Rajasthan, while some other tribes such as Mirasi and Bhat may also perform. The Pokhran and Deedwana perform this folk dance in order to honor Baba Ramadeo, their folk hero.

Looking at a Rajasthani folk dance performance is similar to looking into a kaleidoscope! So many vibrant colors, moving around in patterns, enthralling our very souls. The overall culture and traditions of Rajasthan have an everlasting impact on anyone who visits the place. The richness of the art of this land is unfathomable. One lifetime is not enough to explore it all. Better start now! Hope you liked this list of some of the most famous folk dances of Rajasthan. Which of these folk dances are you most excited to witness? Do let me know in the comments section.