No other person has influenced the world politics, maps and dynamics in the 20th century than one man – Adolf Hitler. His actions and policies were largely responsible for the outbreak of the Second World War that changed international boundaries, power balances and the outlook of the whole world in in the 1900s.

A man who has often been portrayed as the symbol of evil and cruelty of the worst kind, Adolf Hitler was also known to be a very interesting character who had a fascinating story as he rose from an aspiring artist to the Chancellor of Germany.

We bring you 13 little known interesting facts about Adolf Hitler.

1. In 1939, E.G.C. Brandt from the Swedish parliament nominated Adolf Hitler for the Nobel Peace Prize as a satirical move. However, the nomination wasn’t received well and was withdrawn quickly 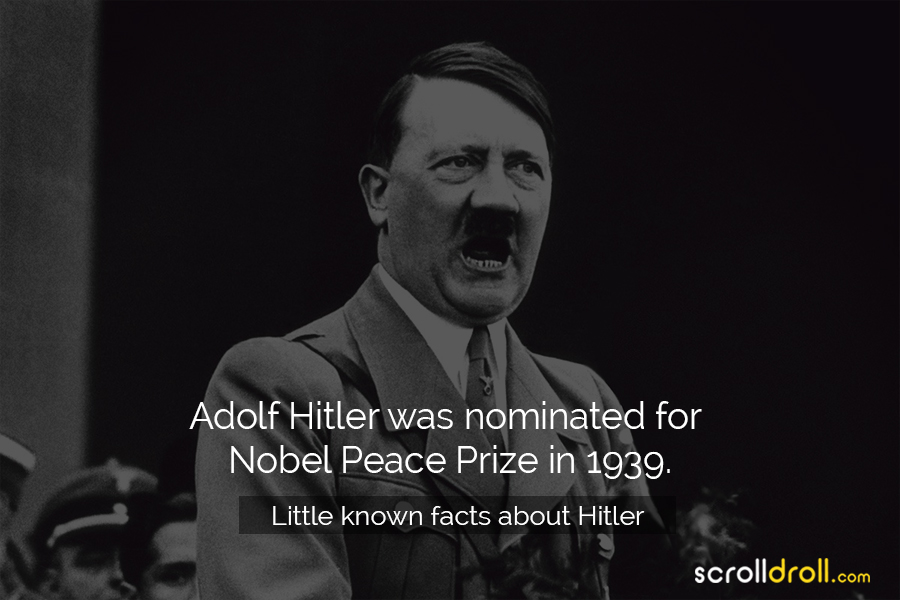 2. On September 28, 1918, Henry Tandey, a British soldier encountered a wounded German soldier near the French village of Marcoing and refused to shoot him. The German soldier happened to be – Adolf Hitler. 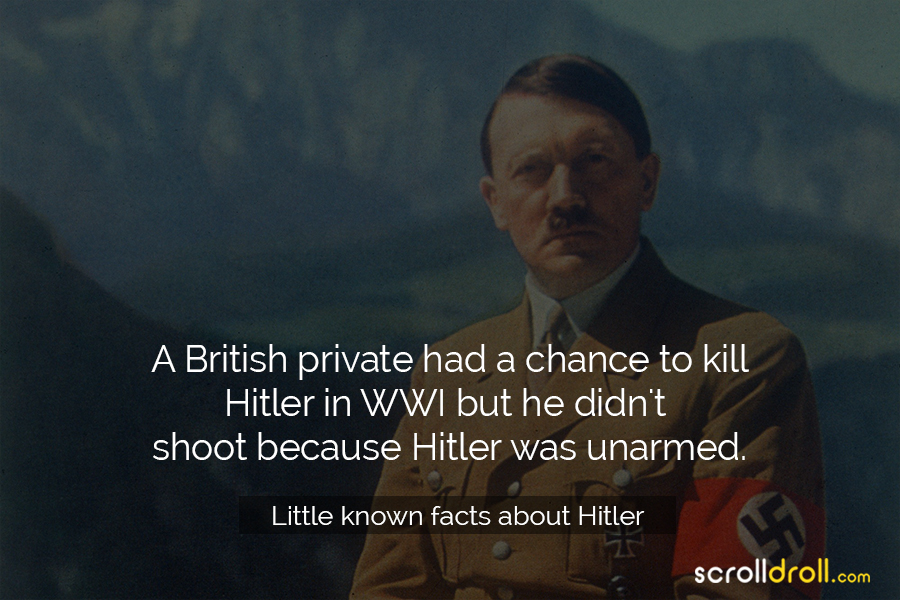 3. Adolf Hitler was born in Braunau am Inn, a town in present-day Austria. This town was close to the border with the German Empire. 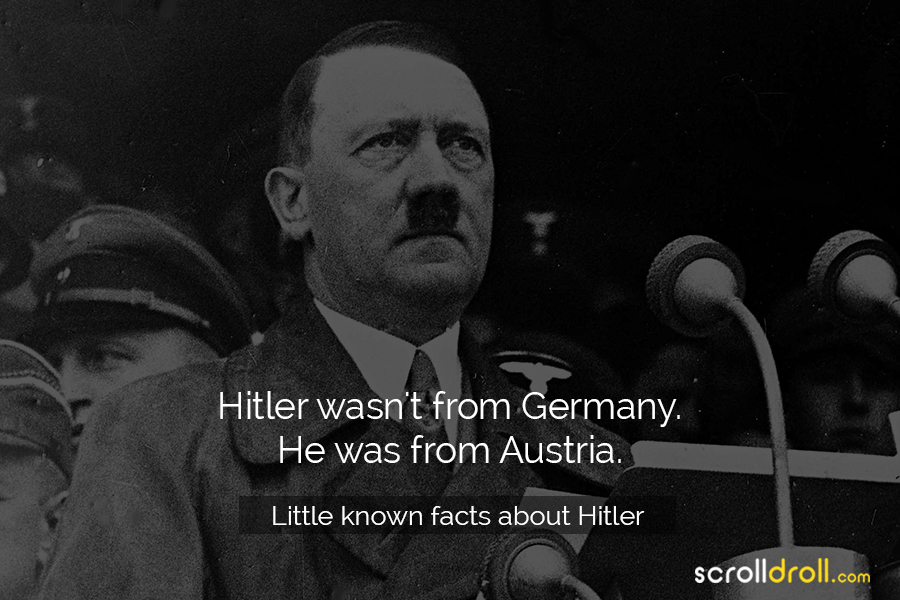 4. Hitler became a vegetarian towards the end of his life. Several Nazi leaders including Hitler supported animal rights and conservation. Under Hitler, Germany became the first country to ban vivisection – performing operations on live animals for experimentation. Commercial animal trapping, boiling crabs and lobsters were banned in Nazi Germany and several restrictions on hunting were imposed. 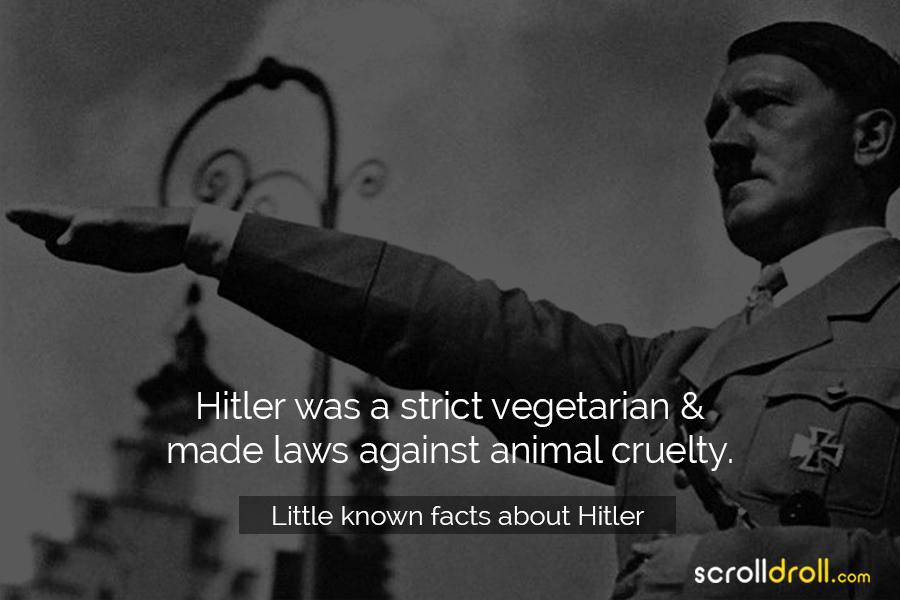 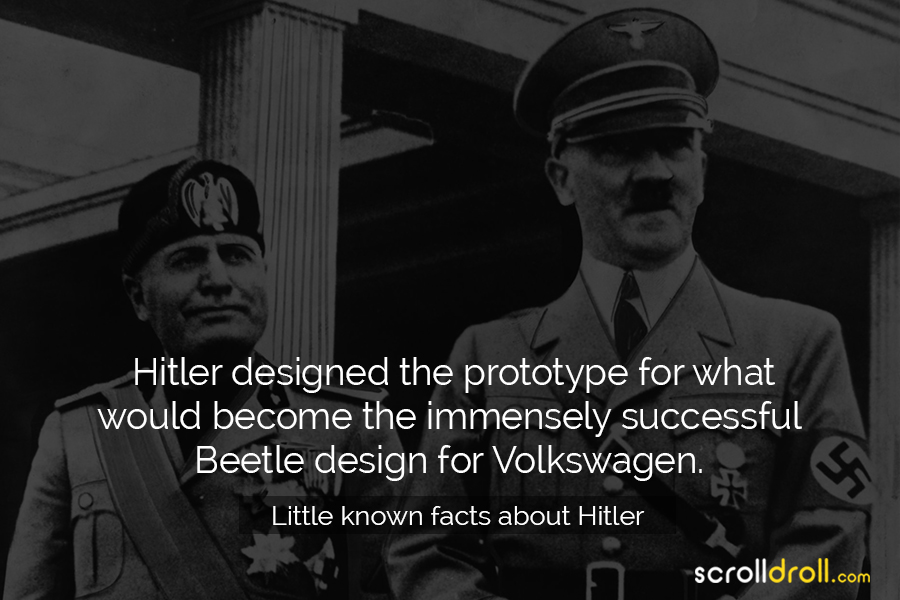 6. Hitler wore the toothbrush after he was ordered to trim his moustache so that he could easily wear a gas mask in the trenches during World War I. 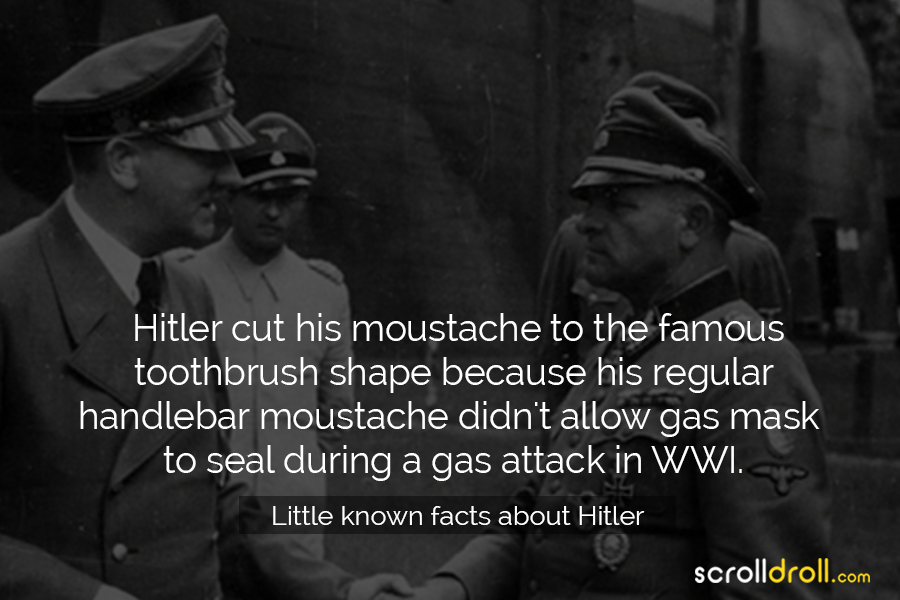 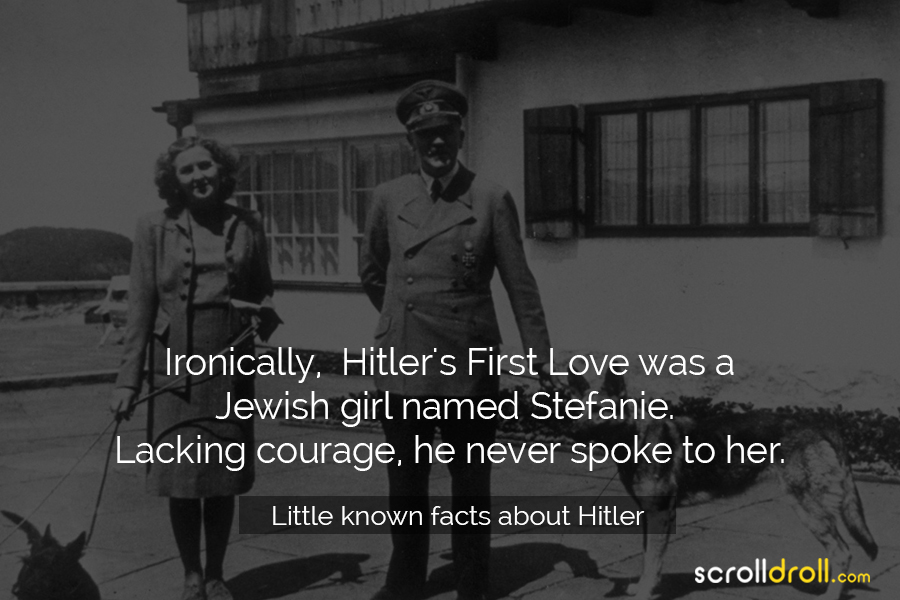 8. A German historian has claimed to have discovered Hitler’s medical examination report after his arrest in 1923 which confirmed that he suffered from right-side cryptorchidism – a medical condition in which his right testicle failed to descend from his abdomen to the scrotum. 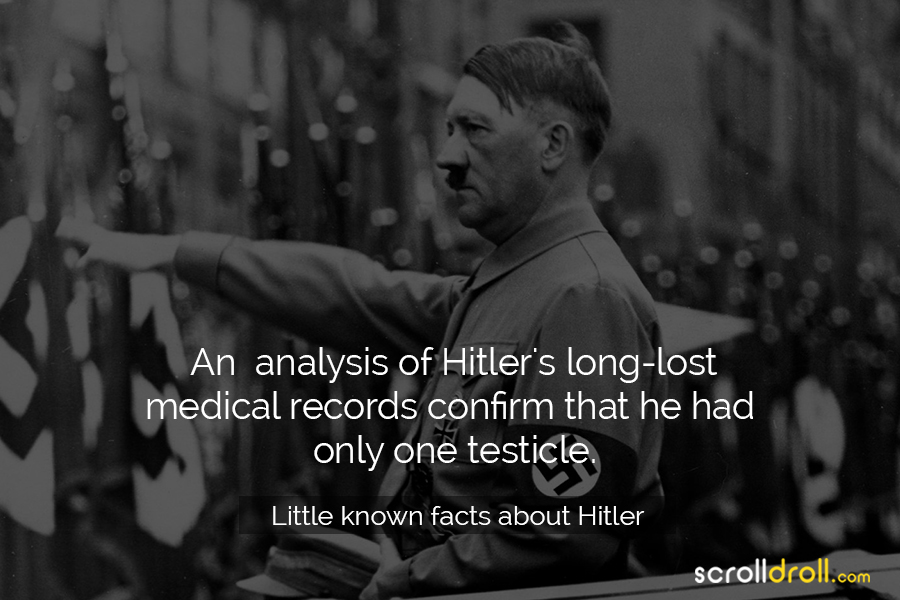 9. Several historians claim that Hitler nearly drowned in the icy waters of the River Inn in Passau, Germany, in January 1894 but was saved by a priest. 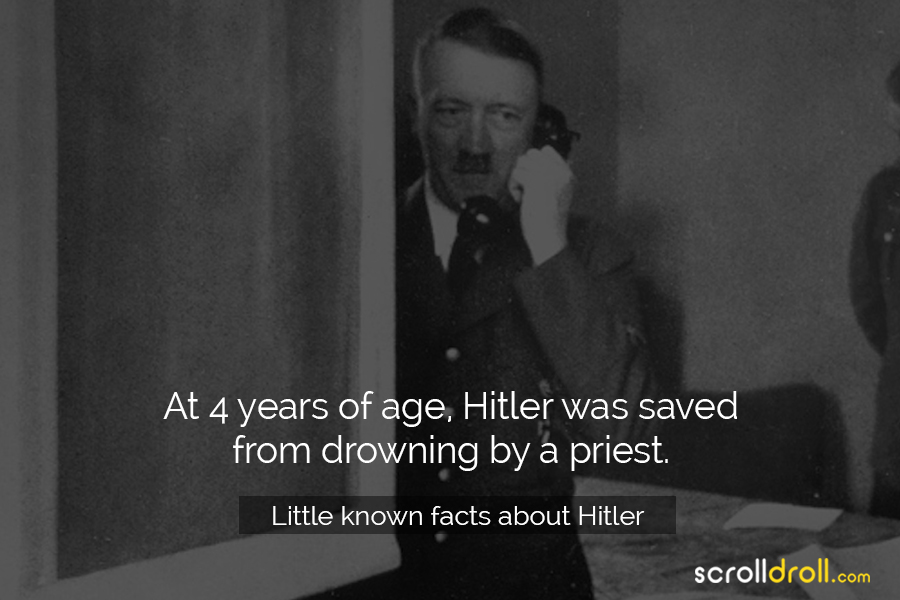 10. Between 1939 and 1945, there were several attempts to assasinate Hitler but each one of them failed. 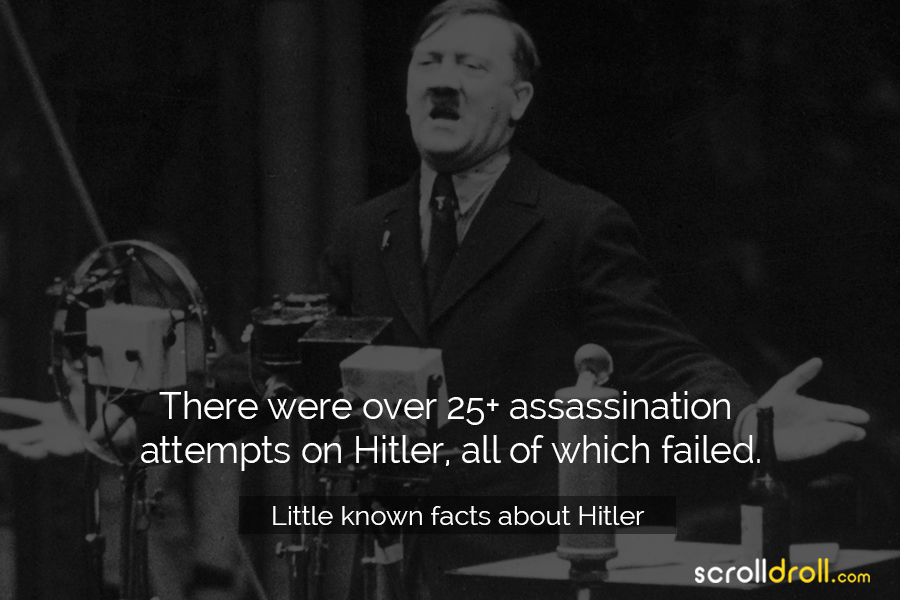 11. Hitler had applied for admission in the Academy of Fine Arts Vienna twice as a teenager but was rejected both the times. 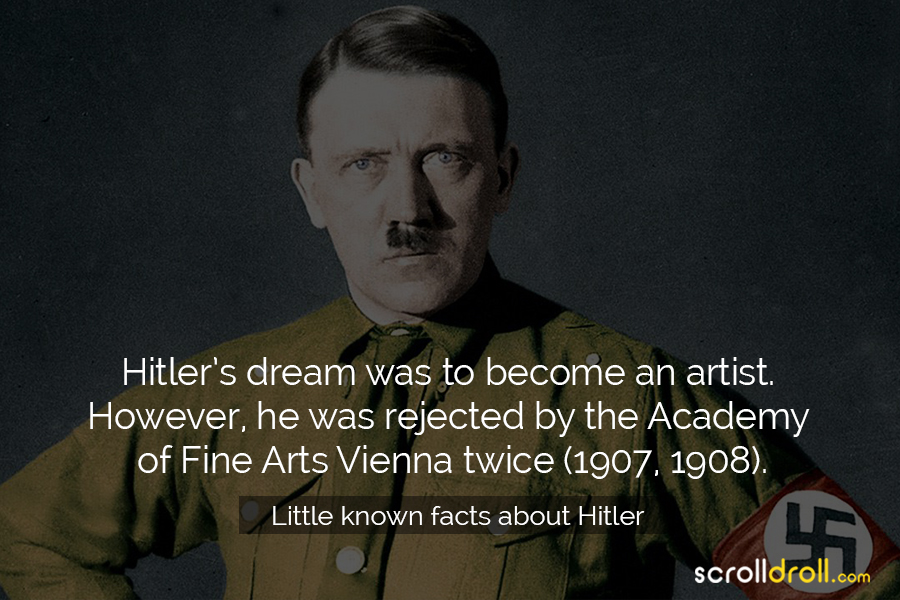 12. The Anti-tobacco and anti-smoking movement in Nazi Germany was one of the most powerful in the world. There was significant research on the ill effects of smoking during Hitler’s regime. Adolf Hitler personally had distaste for tobacco. 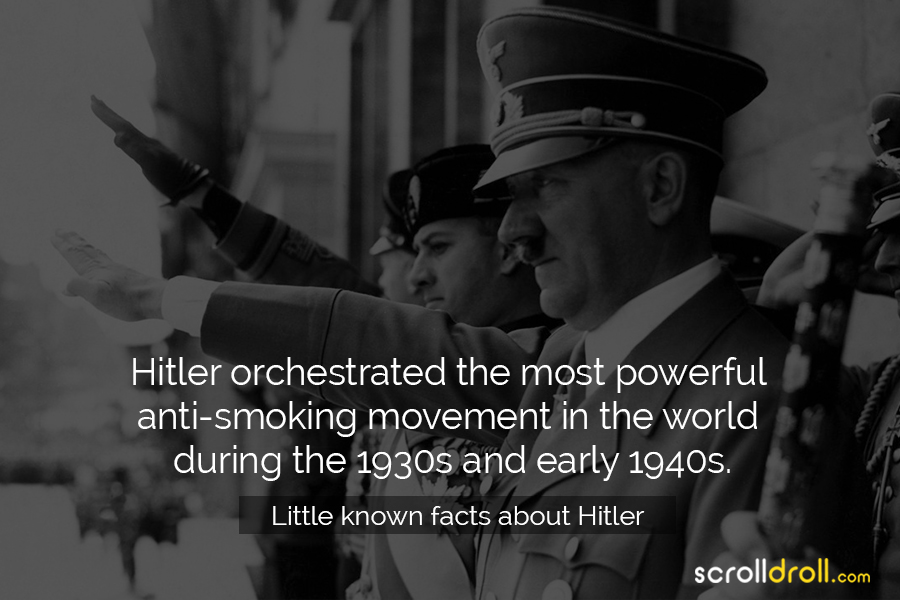 13. According to the Magazine, Hitler was chosen for becoming “the greatest threatening force that the democratic, freedom-loving world faces today.” 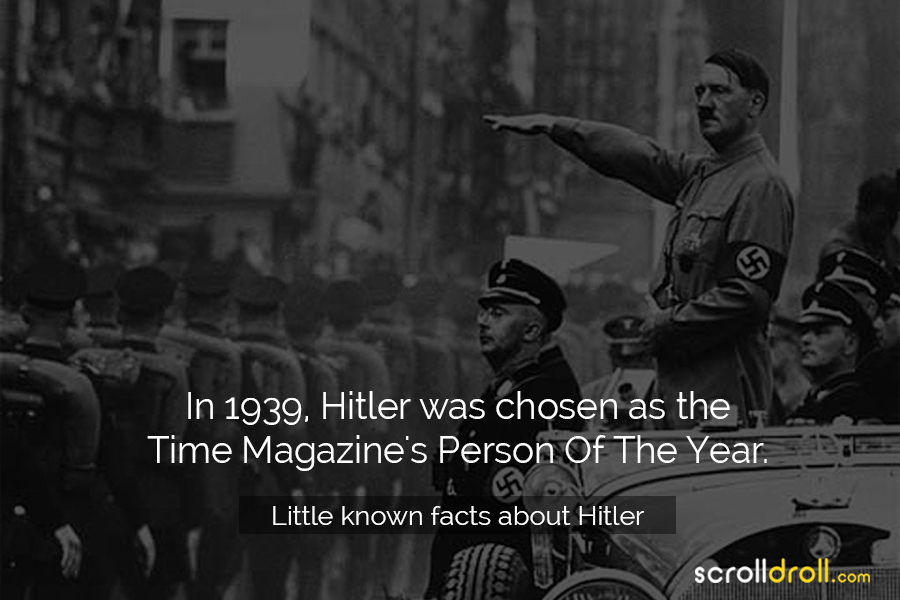 Some of these little know interesting facts about Hitler are too astonishing to believe. We only hope that while we go through details of his life like this, we also remember how the Nazi ideology caused destruction and deaths of thousands all across the globe and such an ideology should always be discouraged.