It took immense trust and freedom given to Sylvester daCunha and Eustace Fernandes by Verghese Kurien to create the Amul baby and the proceeding ads. The advertising department which is now headed by daCunha’s son Rahul daCunha has won many hearts. This witty, unapologetic and brash mascot has an opinion about anything and everything, be it a political situation, a victory in the sports field or a path-breaking movie. Being important in our everyday lives, here are some of the very best Amul ads through the years!

Now let’s get back to our list of the best Amul ads!

1. Chandrayaan I was a lunar probe launched in 2008, and happened to be India’s maiden lunar mission. The mission provide a major and much needed boost to India’s space program, ISRO. 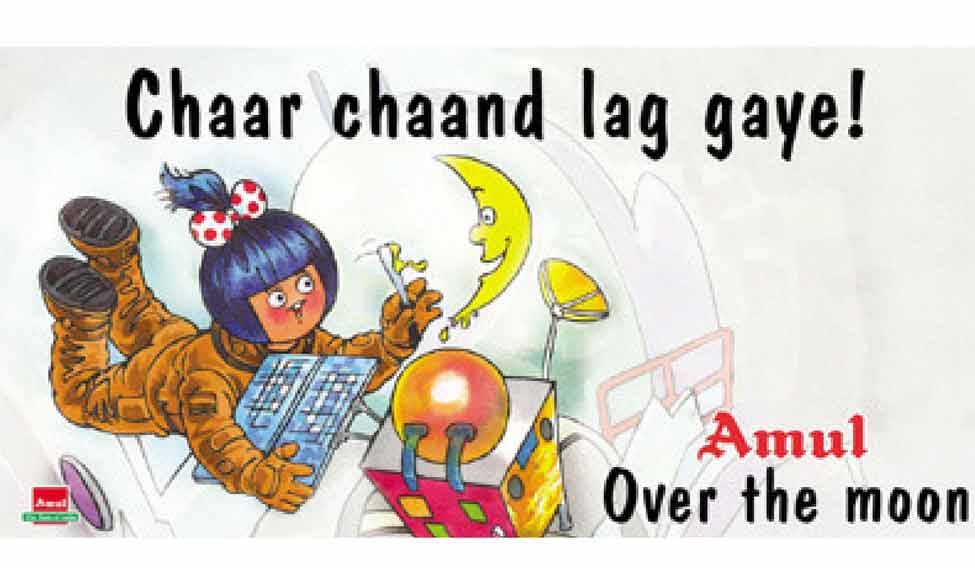 2. In a historic verdict, in 2017, the SC deemed the practice of Triple Talaaq unconstitutional.

3. In April 2018, the SC ordered the revocation of special status to the state of Jammu and Kashmir.

4. In March 1966, Amul came up with an ad that had its mascot riding a horse to commemorate the horse racing season in Mumbai. The ad uses the pun, “Thoroughbread” as a pun on the horse breed named Thoroughbred. This was Amul’s first topical ad. 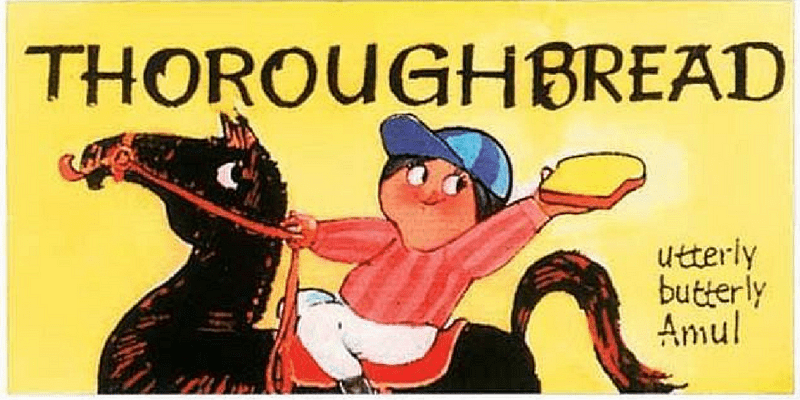 5. During a standoff with Pakistan, Indian wing commander Abhinandan Varthamaan was held captive in Pakistan for 60 hours. Amul celelbrated his homecoming with an ad. 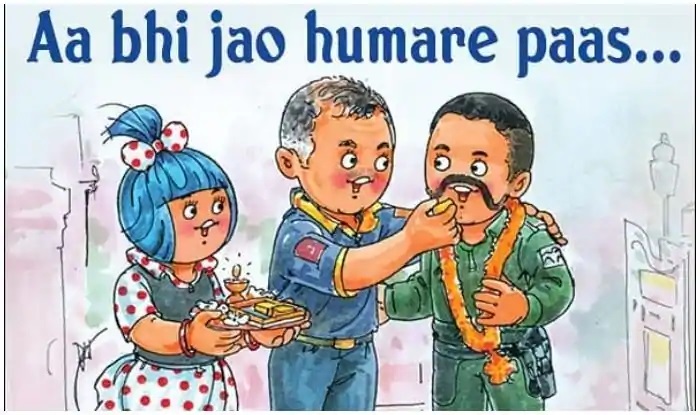 6. In 2014, India successfully launched its Mars orbiter, also known as Mangalyaan. MOM is a nod to the name of the mission – Mars Orbiter Mission. 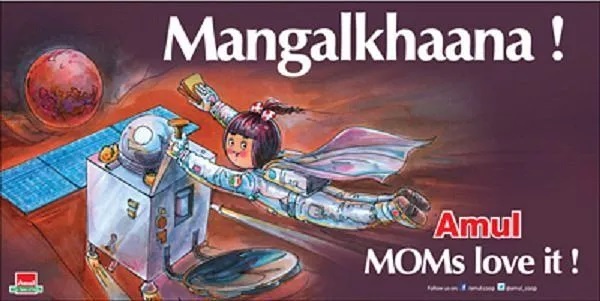 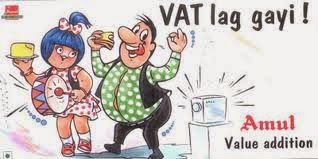 13. In 1992, riots broke out in Bombay after the demolition of Babri Masjid. This ad by Amul asks people to spread goodness instead of rumors. 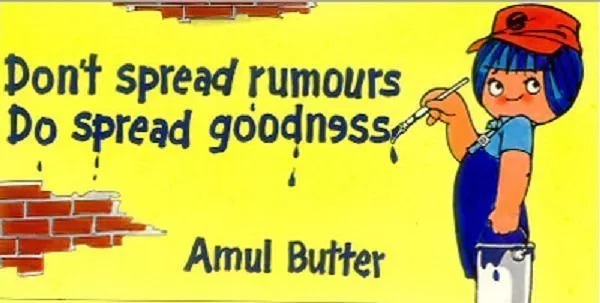 14. This ad commemorates the box office success of the movie Baahubali which came out in 2015.

15. As a retaliation to the Uri attacks the previous month, in September 2016, the Indian forces conducted a surgical strike against militant launch pad. 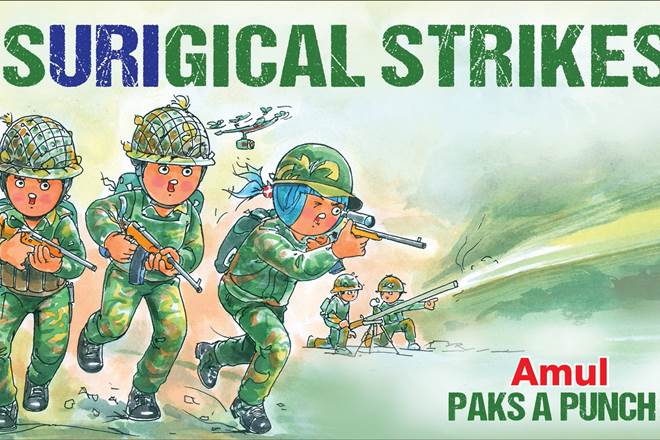 16. This ad commemorates the death of CEO of Apple Inc, Steve Jobs, who died from cancer in 2011. 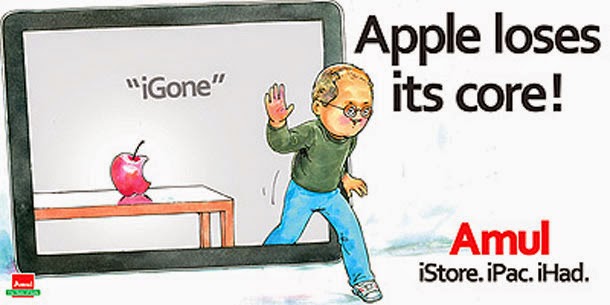 17. In 2019, after the terror attack in Pulwama, IAF conducted what was dubbed as “Surgical Strike 2.0” and dropped bombs on LeT, JeM and Hizbul Mujahideen training camps in Pakistan.

18. With the three major Khans of Bollywood endorsing three different brands of colas in 1999, Amul put up this ad. 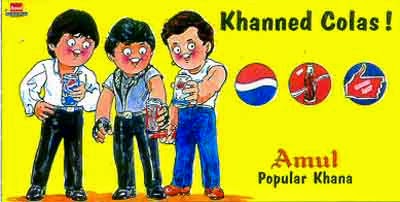 19. This ad commemorates the first anniversary of the 26/11 Mumbai terrror attacks. 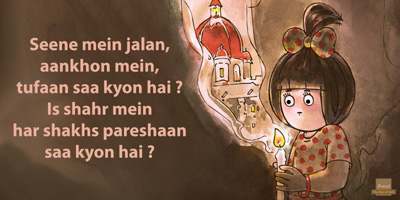 20. This ad references to the famous dialogue by Joker in The Dark Knight: “Why so serious?” 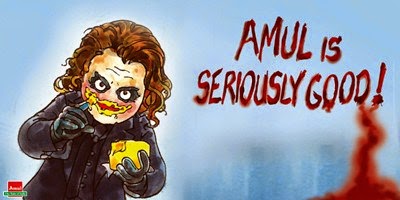 22. The much loved former president of India, APJ Abdul Kalam, sadly passed away in the year 2015. 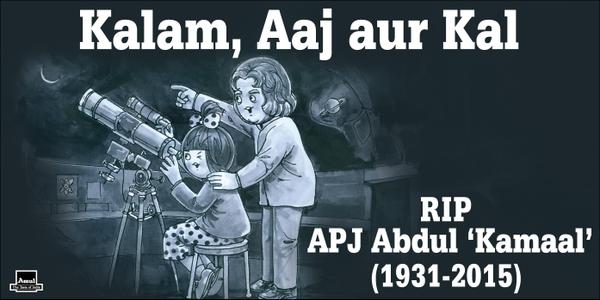 23. In the last years of governance by INC, corruption allegations were rife. The 2010 Commonwealth Games was held in Delhi, and many accused the government of poor organization and accused them of corrupt practices. This negative attention, however, was dispelled after a successful opening ceremony.

24. Bill Clinton was accused of sexual assault by multiple women, and was found to be having a sexual relationship with an intern at the White House, Monica Lewinsky, while he was president.

25. “Ravanously” puns on the word ravenous, which means famished, and “Ravan”, the asura antagonist of the Indian epic Ramayana. 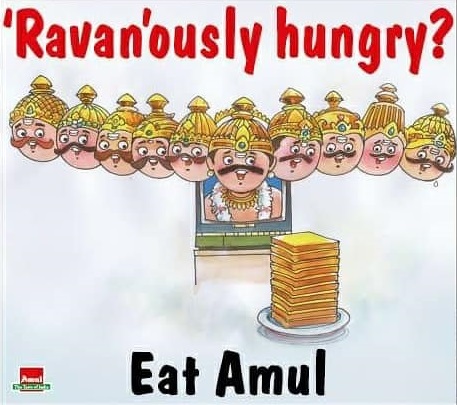 26. This ad celebrates 60 years of Doordarshan, which was founded in the year 1959. The first picture shows a child having breakfast while Doordarshan plays in the background, while the second one is a reference to popular cultural show, Surabhi. 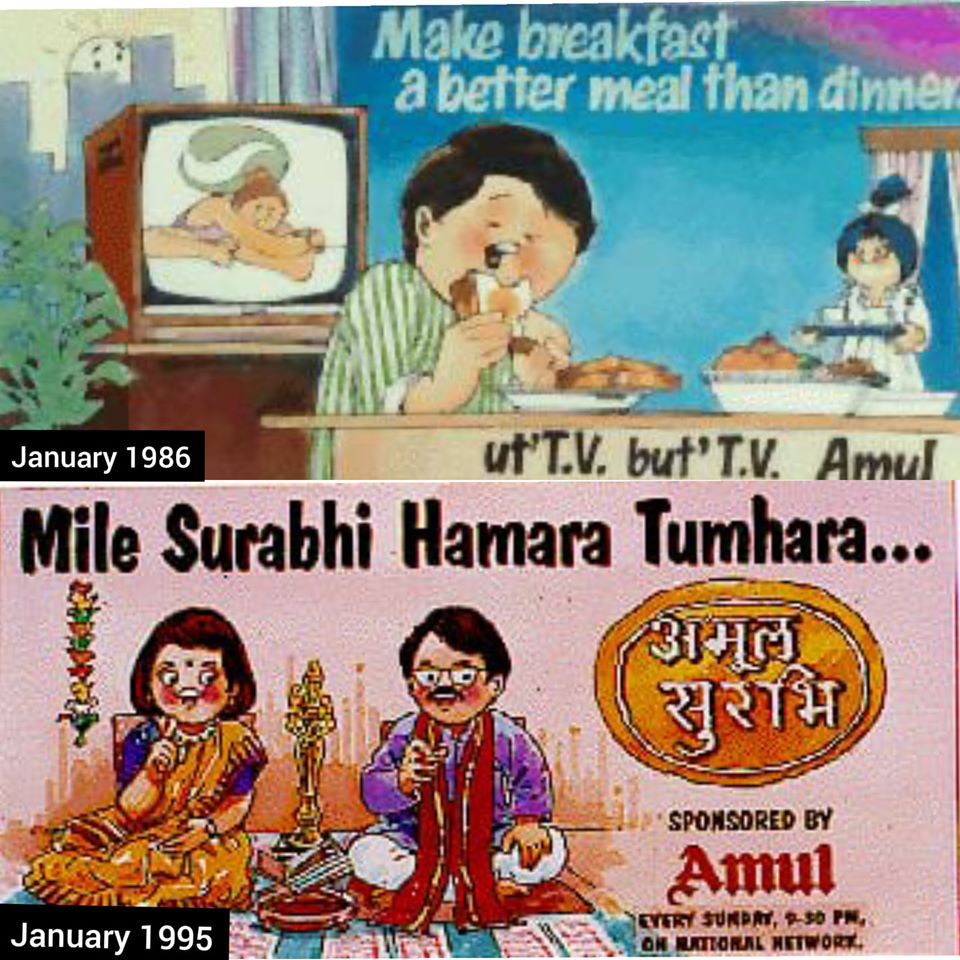 27. In the 2019 world cup, New Zealand and England contested for the coveted cup. However, the final match ended in a tie, resulting in a super-over – which also ended up being a tie! England was announced winner because of the boundary-back rule, having scored 26 boundaries against NZ’s 17.

28. The statue of unity was opened to visitors in 2018. The Sardar Vallabhbhai Patel statue is the tallest in the world.

29. In 2009, Indian National Congress won the general elections in India and was chosen to form the central government. The party’s symbol is a hand. 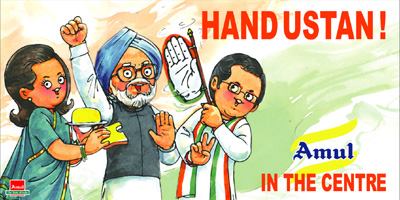 30. This ad commemorates the debuts of several second (or in some cases, 4th) generation politicians into parliamentary elections in 2004.

31. This ad pays tribute to the world famous physicist, Stephen Hawking, who passed away in the year 2018.

32. This ad features the Aamir Khan starrer blockbuster from 2008, Ghajini, where the protagonist famously tattoos himself with important information because he has short term amnesia. 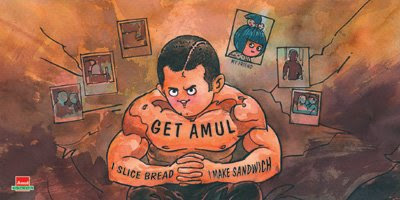 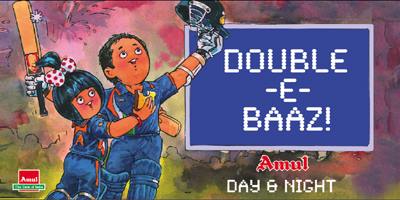 34. This ad commemorates former captain of the Indian national cricket team, MS Dhoni, passing on the captaincy to Virat Kohli.

35. In 1989, Richard Hadlee broke Kapil Dev’s record after being the first person to take 400 wickets in Test cricket.

36. The much beloved chief minister of Tamil Nadu, Jayalalithaa, finally breathed her last in December 2016 after a long fight with a severe pulmonary infection. 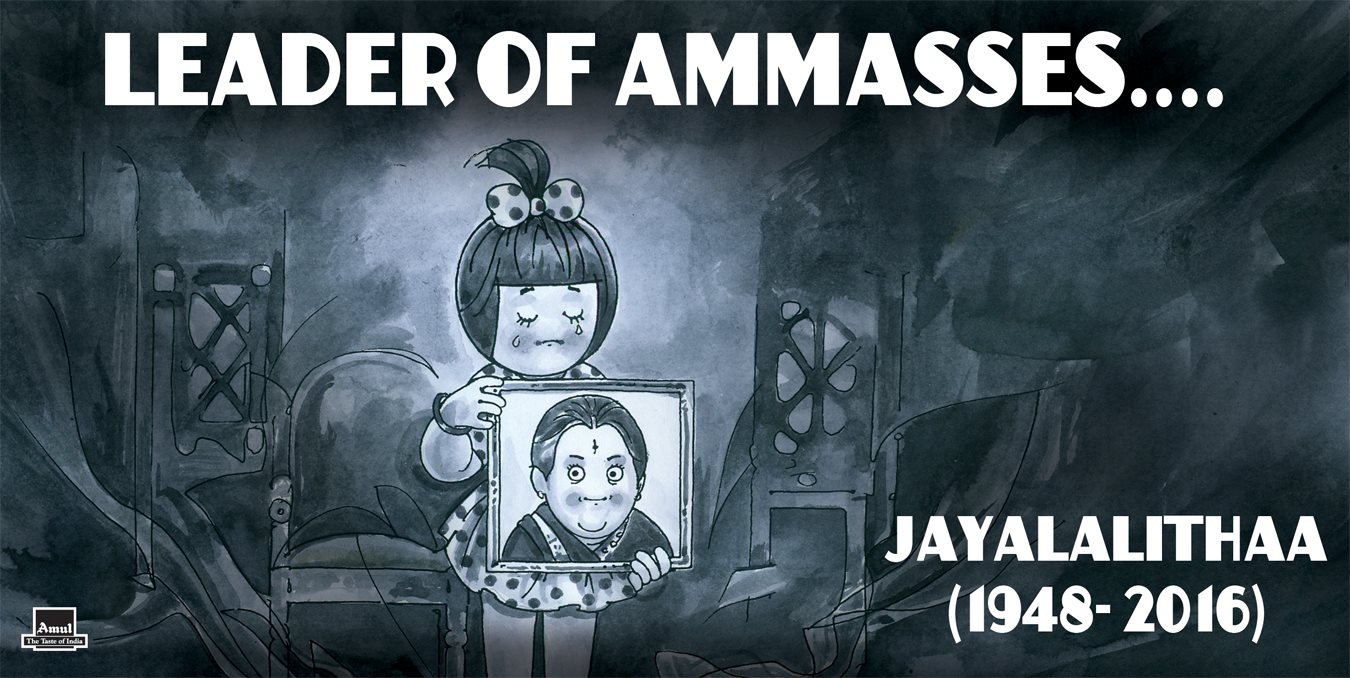 37. In 2016, the world was in for a surprise after Donald Trump won the US elections despite having no experience in politics.

40. in 1987, Amul came up with this ad to celebrate the sucess of Amitabh Bachchan starrer Shehenshah. 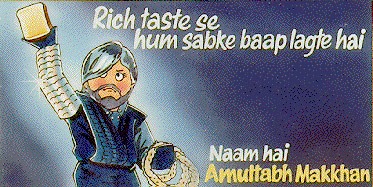 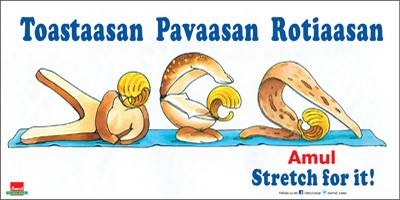 42. Mohammad Ali was a world renowned professional boxer who was a towering figure in 20th century sports. Sadly, the legend passed away in 2016.

43. In 2008, Tata launched Nano: the cheapest car in the world which cost just over 1 lakh rupees. 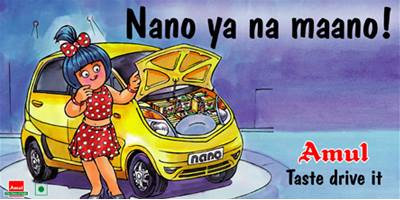 44. In the December of 2012, a woman was raped on a movin bus in the national capital. With this ad, Amul reminds the nation that India after all, is also a woman and a “mother.” 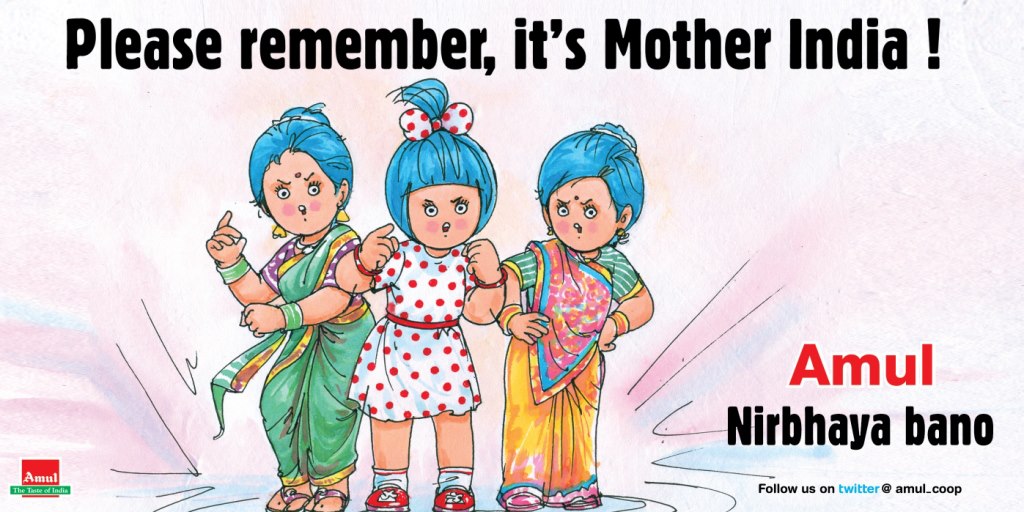 45. BJP contested the 2014 elections with the tag line, “Abki baar, Modi Sarkaar.” This ad was put up after BJP won the elections.

46. In 2011, activist Anna Hazare began his hunger strike to pressurize the Indian government to enact an anti-corruption law, the Lokpal Bill. 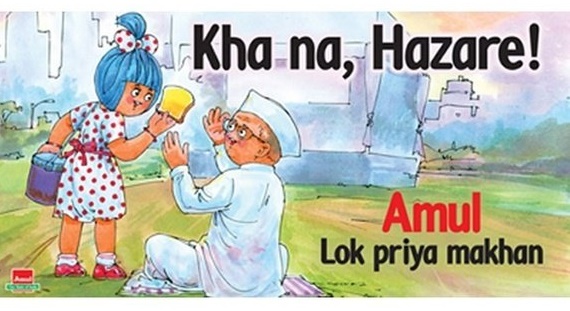 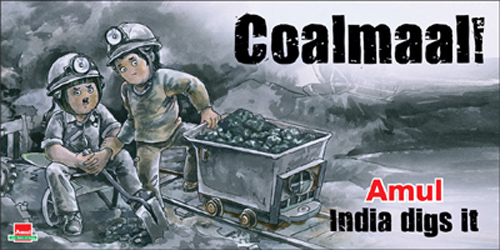 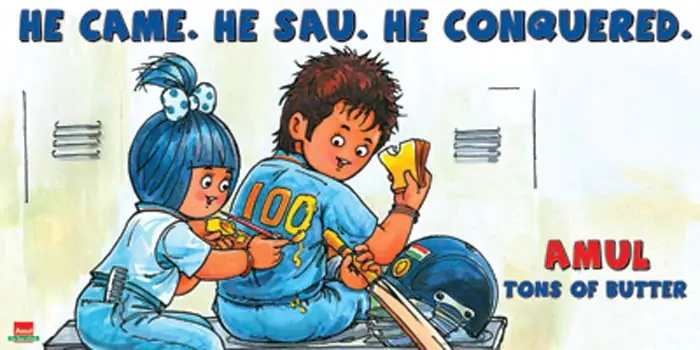 49. This ad celebrates the division of Andhra Pradesh into 2 states, and the making of a new state: Telangana. 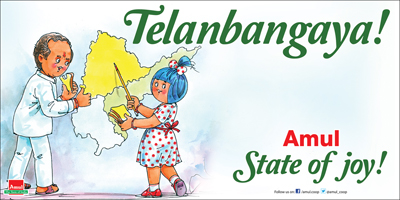 50. In 2009, the chairman of Satyam Computers admitted to falsifying company accounts. 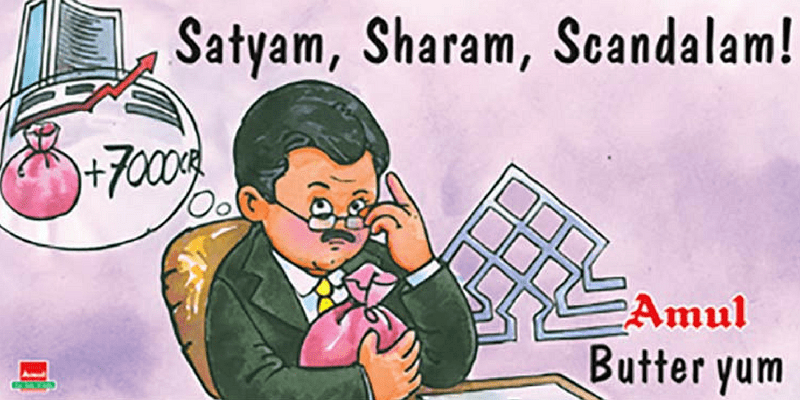 She has an opinion about everything and we love it! Did you like our compilation of the best Amul ads? Which one’s your favourite?