Cricket found a home in various countries over the last few centuries. Every new country gave the game a new place of growth – stadiums. Big, small, round, oval, grassy, dry – they were homes of different kinds, but they nurtured the game all the same. Stadiums in India are especially important because of the sheer number of fans that flock to them for every match the country hosts. So here’s looking at the 10 best cricket stadiums in India:

This one’s an obvious choice. Eden Gardens is the gem of Indian cricket that’s absolutely beloved by devout fans. The stadium bears the long story of cricket and its growth in India since the very first test match it witnessed in 1934. Eden Gardens is almost sacred to cricket fans globally. It hasn’t been quite the luckiest for team India in the past until the likes of Harbhajan Singh and Anil Kumble carved out the wins against Australia and Pakistan. The ground has seen more than a fair share of scandal and conflict. Various instances of crowd violence and upheaval mark the history of the ground. It has seen everything from violence to celebration in its lifetime and the stories it holds are considered sacred for fans – stories that will undoubtedly be passed down by fans to create a new generation of admirers. 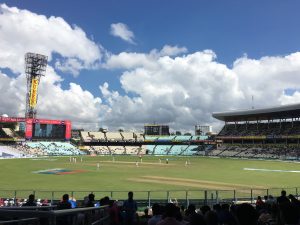 Formerly known as Feroz Shah Kotla Stadium, this central point of Delhi cricket has seen the evolution of many great additions to the Indian team. It’s undoubtedly one of the best stadiums in India with its diligent ground staff taking great care of the pitch and grounds, and the history it has had with the game. It also happens to be one of the oldest cricket grounds in the subcontinent, having been established in 1883. Many a great feat has been achieved in these beloved grounds, most notably the 10-wicket sweep by Anil Kumble. Stalwarts such as S. Venkataraghavan made their test debuts on these grounds and racked up numbers as formidable as 8-72 and 4-80. The likes of Bedi and Prasanna also created milestone innings at the Kotla, with their historic win against Australia owing to their combined efforts to pick up 18 wickets between them. The future of this stadium, however, hangs in the balance after a 2019 ODI between India and Sri Lanka was canceled due to a dangerous pitch. But that in no way diminishes the significance or importance of these grounds that have seen Indian cricket grow so consistently for almost a century and a half. 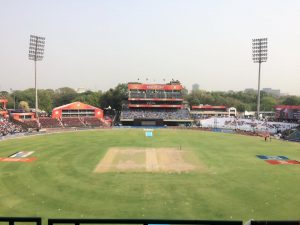 This one holds a special place in every Indian cricket fan’s heart. The Wankhede Stadium was built after the Bombay Cricket Association (BCA) and the Cricket Council of Indian (CCI) had a dispute and thus the Brabourne Stadium was off-limits to the former. The new stadium, with a capacity of 45000, was the third built in the cricket capital of the country. These grounds have seen some phenomenal records and feats being set, including Ravi Shastri’s six 6s and Vinod Kambli’s 224 against England, which is the highest individual score by an Indian at Wankhede. The most memorable, however, had to be the much-awaited reclaiming of the ODI World Cup after 28 long years in 2011 under the captaincy of MS Dhoni. Ravi Shastri’s commentary describing the last ball of the finals still seems to loom over the stadium. The ground’s seaside location has been known to be helpful to spinners, as has the red soil. It is a particular favourite spot for fans of the game worldwide due to the vivacious energy Mumbai fans bring to it and the unpredictable nature of the pitch and the winds.

Formerly known as Sardar Patel Stadium or Motera Stadium, the recently reconstructed and renamed Narendra Modi Stadium is the largest cricket ground in the world, dethroning the MCG from its long-held spot. It holds 132,000 fans at a time and has quite a history of budding talent and great records. Established in 1982, the stadium was meant to boost the cricketing standard of the province. These grounds have seen everything from Sunil Gavaskar’s 10,000th test runs and Kapil Dev’s 432nd test wicket, passing Richard Hadlee’s long held record. These grounds have been renovated and made better periodically, the most recent being the 5 year renovation period from 2015 to 2020. Fans worldwide are eager to witness more matches in one of the best cricket stadiums in India very soon. 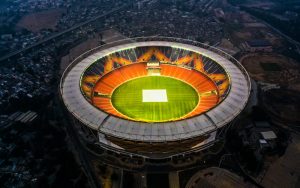 Home ground to one of the most beloved IPL teams, the M. Chinnaswamy Stadium in Bangalore has been instrumental in the growth of Indian players. Originally named the Karnataka State Cricket Association Stadium, the grounds have been in use since 1969. It gained test status in 1974-75 and saw the debut of one of the greatest batsmen of all time, Viv Richards. It holds about 40,000 fans and has hosted some unforgettable games in its 50+ years. The BCCI has come under fire for the ill-maintained stands in the stadium very recently after the final India v. South Africa match was washed out there and leaky roofs over the stands were spotted and broadcast via fans. 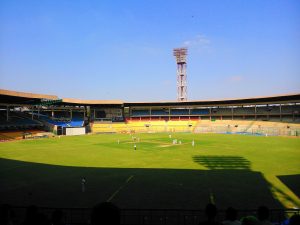 Madras Presidency’s spiritual center of cricket, the MA Chidambaram Stadium has been in use for over a century. Established in 1916, Chepauk saw its first test match in 1933-34. The grounds have also seen India’s first test win in 1951-52 when they beat England by 8 runs and an innings to spare. Sunil Gavaskar’s 30th test century also came on these very grounds. Chepauk holds a capacity of 38,000 fans who have, over the years, witnessed some of the greatest cricket played by the country and its regional teams.

The Rajiv Gandhi Cricket Stadium was set up to ensure the Hyderabad players have a big enough ground to play and practice in. It was born out of sheer necessity since the Lal Bahadur Shastri Stadium was rather small. It has had more than a fair amount of scandal associated with it and has been caught up in the politics of the state government and the cricket association. It is yet to see a big match played there, but it is fully equipped with state-of-the-art equipment and facilities to ensure a smooth sailing international match. 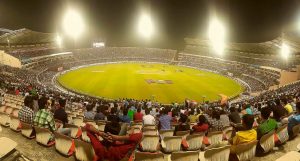 Nestled between the snow-capped peaks of Dharamshala is the picturesque HPCA Stadium with its capacity of 23,000. It is one of the most serene environments to host a match in, with open stands and an uninhibited view of the hills from all sides of the grounds. It is situated at 1317m above sea level, making it one of the highest stadiums in India. The stadium under the HPCA is also home to one of the only residential facilities for female cricketers in the country. With the coming of the IPL, the stadium in Dharamshala received greater appreciation and it was brought into the limelight. It has the potential of becoming a favourite for fans and players globally with its location, maintenance, and facilities and most definitely is one of the best cricket stadiums in India.

The Punjab Cricket Association Stadium in Mohali is a world-class ground with its practice facilities and pitch. What had once been swampy land in 1992 was soon transformed into one of the most beloved and memorable stadiums in the country. The IS Bindra Stadium was fitted with low floodlights to prevent accidents with aircraft flying in or out of the nearby airport. With its capacity of 26,000, the stadium is home to numerous beloved players who went on to play for the country. It was one of the prominent grounds that assisted pace beautifully but that has changed in the past, especially after renovations and changes. These grounds are remembered for several high-stakes games, including the 2011 World Cup semi-final game between India and Pakistan that was attended by the Prime Ministers of both nations. The IS Bindra Stadium is undoubtedly one of the best cricket stadiums in India and it will surely see more matches being hosted there soon.

The Shaheed Veer Narayan Singh International Cricket Stadium located in Naya Raipur is one of the newer, more modern stadiums in the country. Inaugurated in the early 2000s it is yet to hold a major international game of cricket. In 2011, it was chosen as the second home ground for the Delhi Daredevils and thus hosted two of Delhi’s IPL matches that year. With its capacity of 49,000, the stadium promises to be a delightful venue to experience international games. 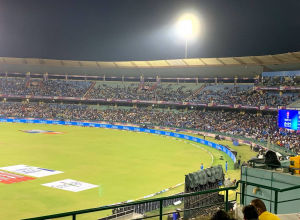 India is the second home of cricket and its encouragement of the game, be it with support or facilities surpasses everything. The best cricket stadiums in India may or may not have hosted memorable matches, but they honour the game and provide enough infrastructure for the game and its players to flourish wonderfully.

10 Most Beautiful And Hottest Bhojpuri Actresses in 2022