Some of the best and most memorable songs in the history of Bollywood- Aye Meri Zohra Jabeen and Kabhi Kabhi Mere Dil Mein, were penned by this brilliant wordsmith. Born in the humble land of Ludhiana (hence the name) as Abdul Hayee Fazl Mohammad, he is better known by his pen name Sahir Ludhianvi. Sahir means the one who charms and enchants. What an apt name he chose for himself! As a kid, he became proficient in Urdu and Persian and showed a keen inclination towards writing verses. As a student, he was deeply interested in the socio-political scenario of the nation, and his communist ideals were well reflected in his words. Post-Independence, he settled in India and started his career as a lyricist. The lyrics and shayaris by Sahir Ludhianvi were not only accepted by the Indian audience but also deeply loved.

The depth in his verses comes from his turbulent life, which involved a fatherless childhood, unrequited love, and the traumas of Partition. 8th March 2021 was observed as his 100th birth anniversary. His contribution to the world of literature and the Indian entertainment industry is priceless and unmatched. Let’s have a look at some of the best verses and shayaris by Sahir Ludhianvi- The OG Bollywood lyricist.

1. This should be the ultimate philosophy of life! It’s a waste of time to dwell in sadness, better celebrate it; that’s what life is all about! 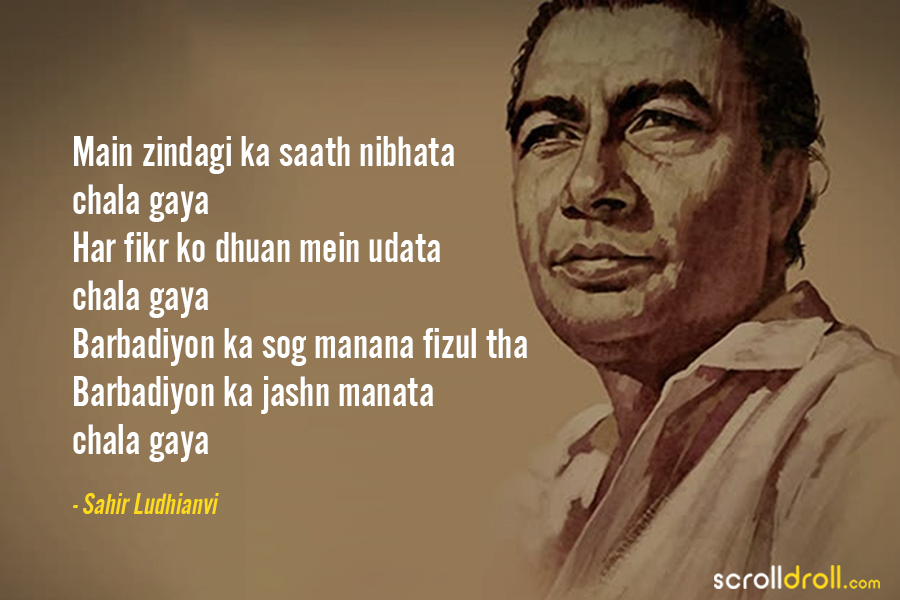 2. The sheer pride and happiness that arises from a sense of belongingness. 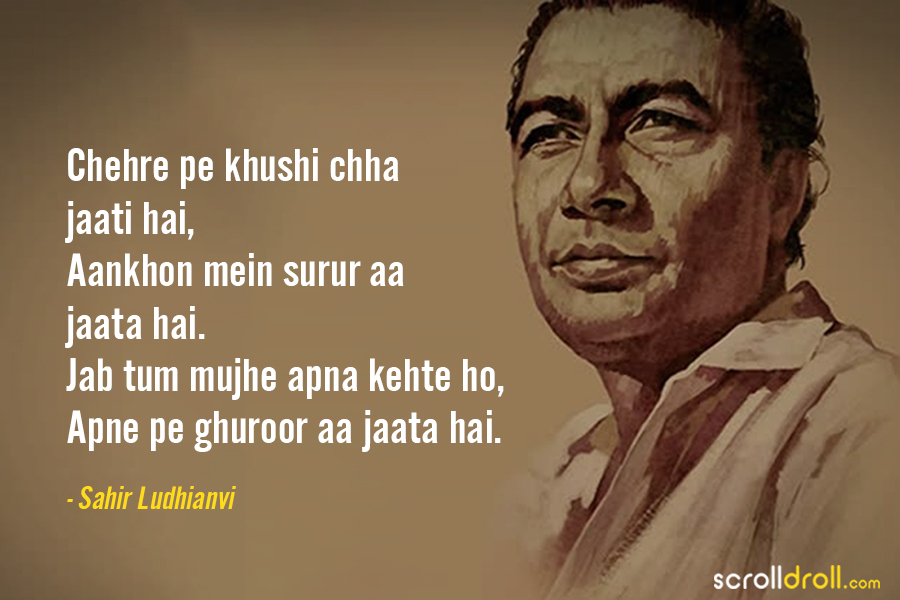 3. You can leave whenever you want, you are just bound by my love, not chains! 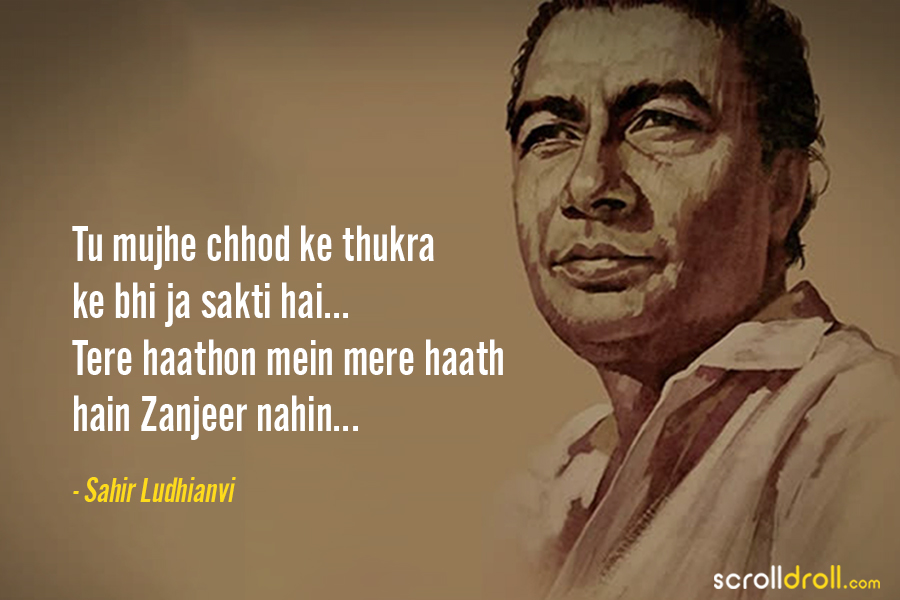 4. These lines were written in the context of the poetic persona meeting his beloved near the Taj Mahal. He says that they shouldn’t meet near the monument as it is built by the rich monarch who mocks the love of the poor. 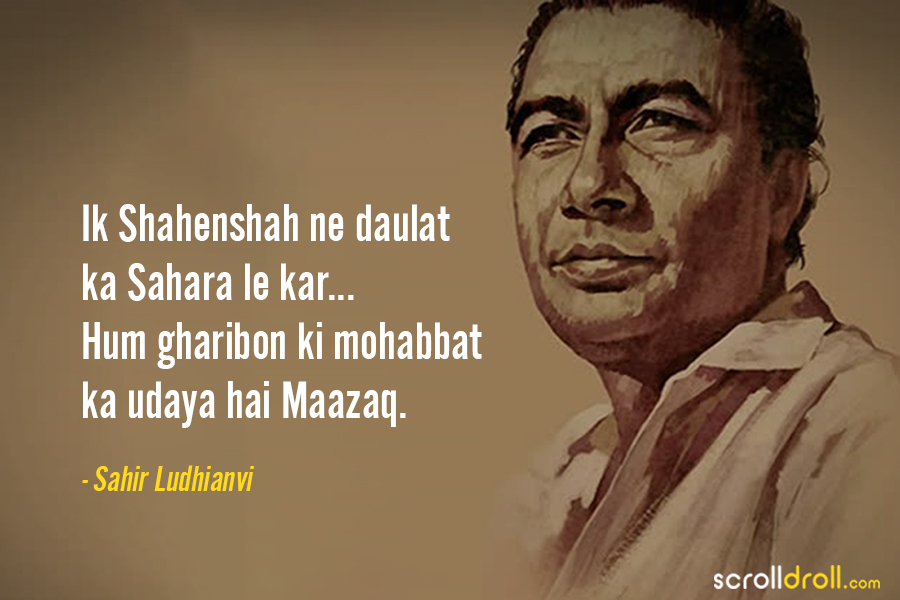 5. We are all humans who have been separated by words such as religion. 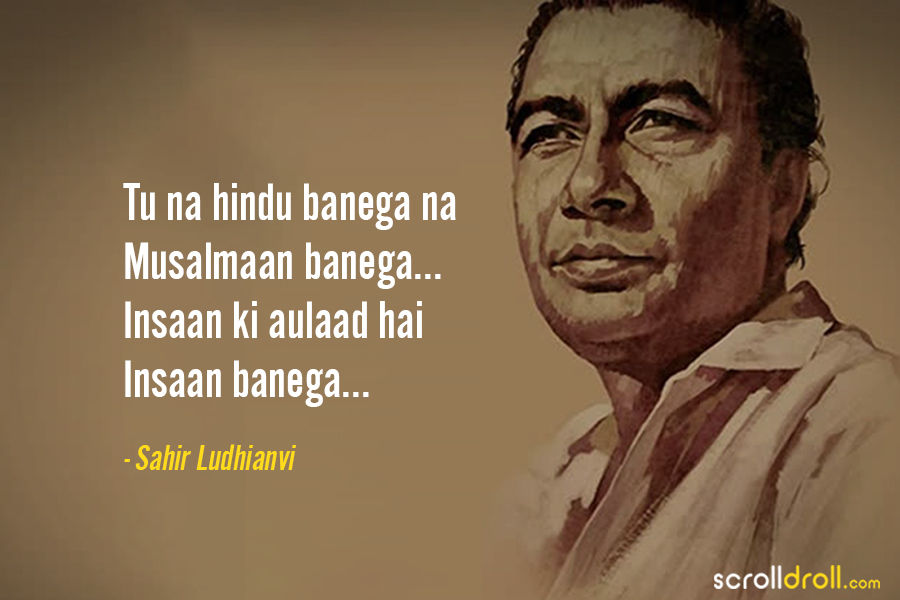 6. The same woman who is a mother is treated as an object of lust and greed by the men of this world. 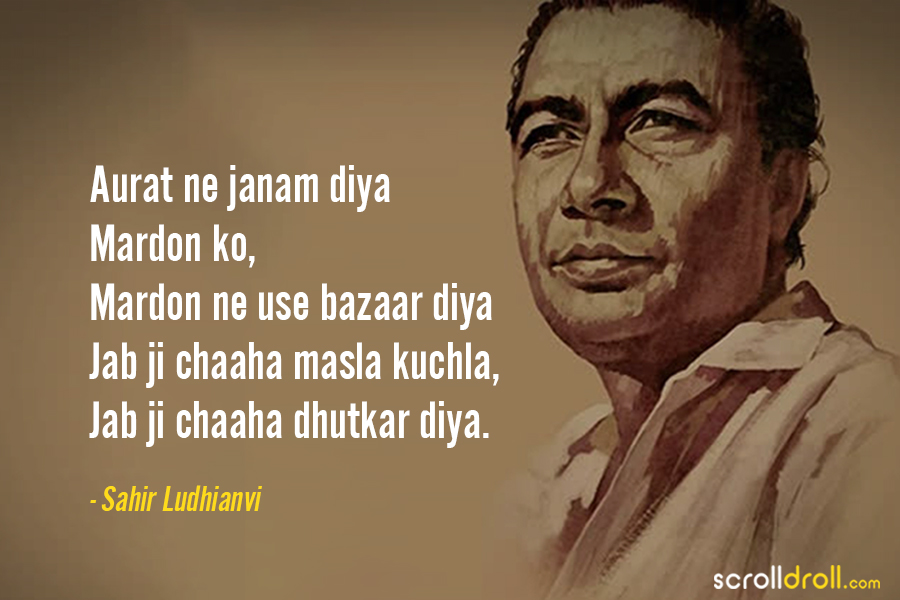 7. The world is such that the more you see it, the stranger it appears to be. 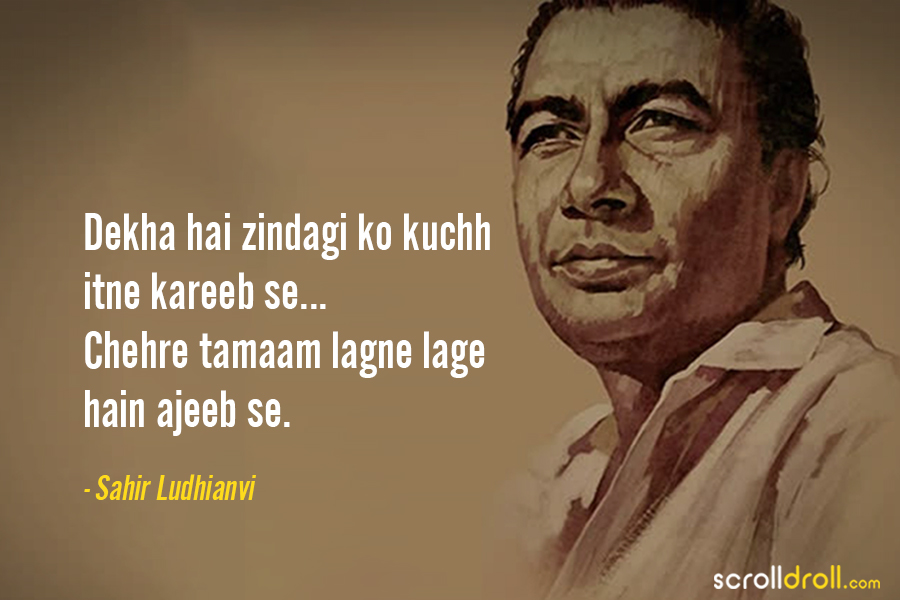 8. Nothing can stop you from blossoming! 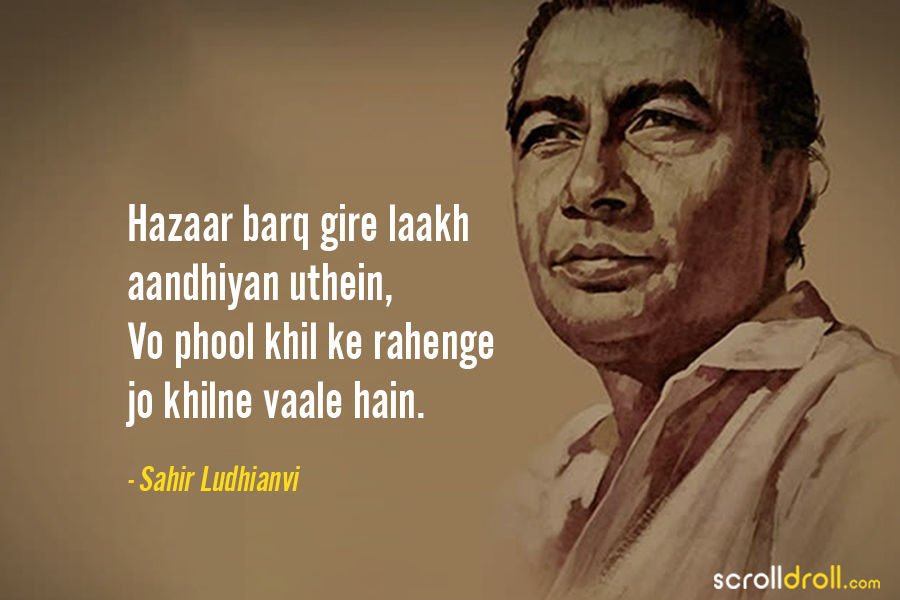 9. The iconic lines from the song Allah Tero Naam from the film Hum Dono. 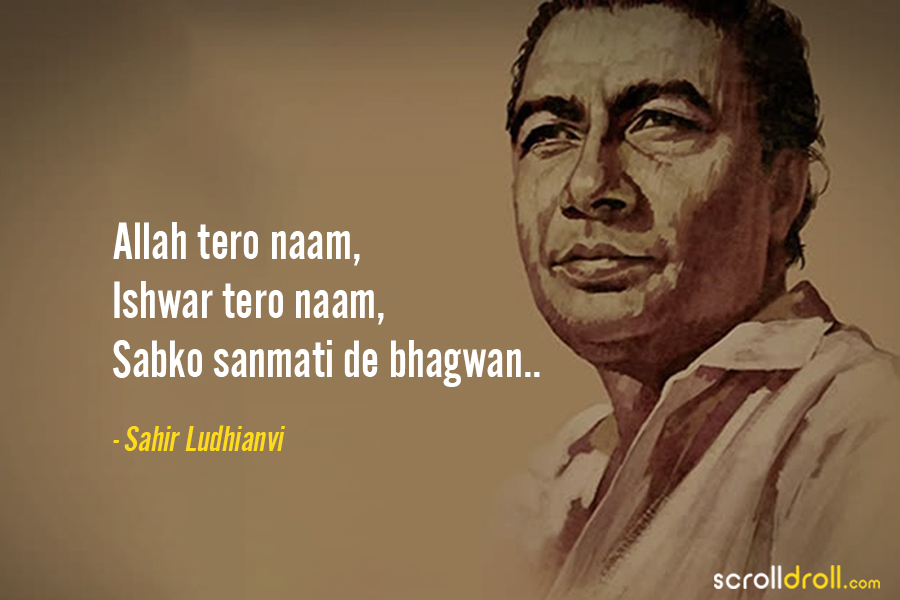 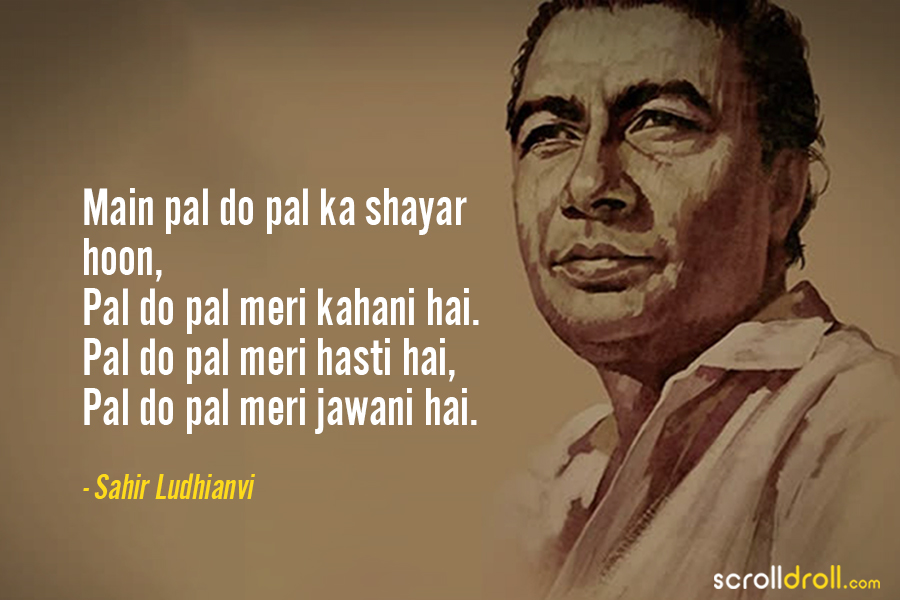 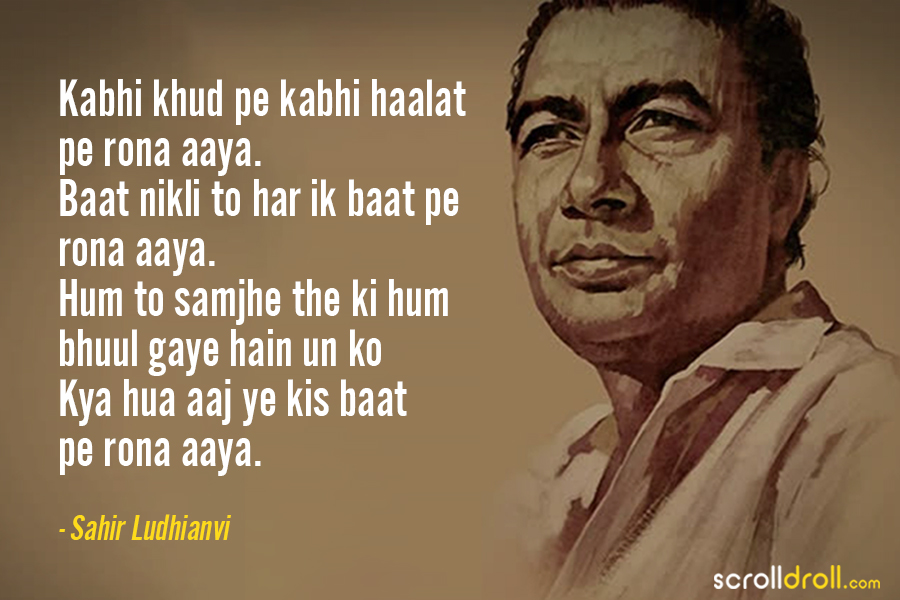 12. When memories are the only thing that is keeping you alive. 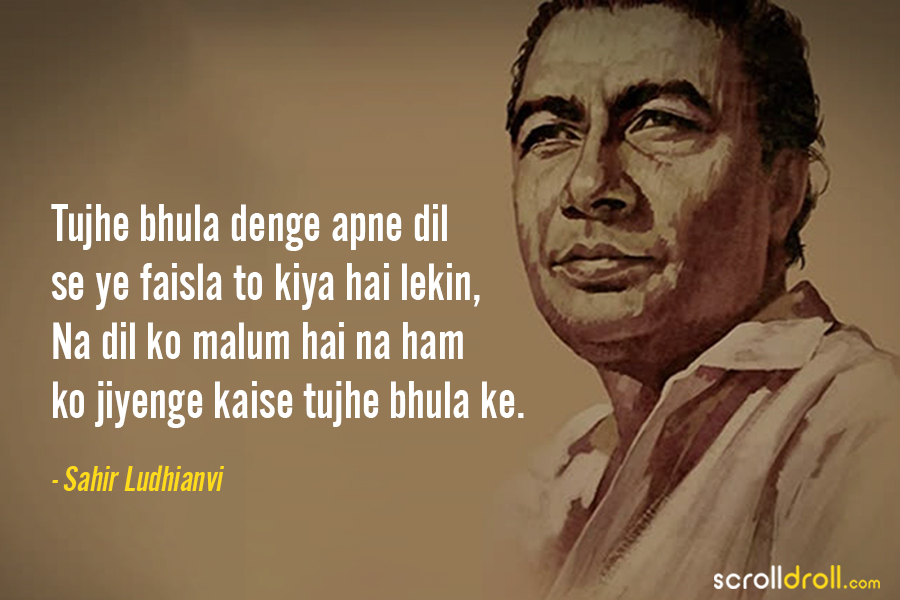 13. On a measure of hearts, I will put every penny of love. 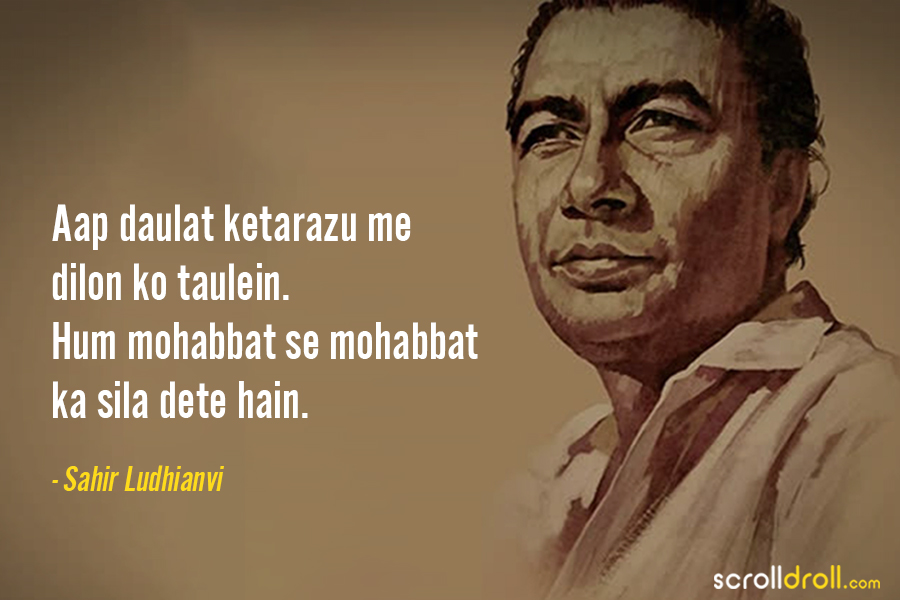 14. Every era has seen the rise of a new religion and a new God. Whom to worship, whom to follow? 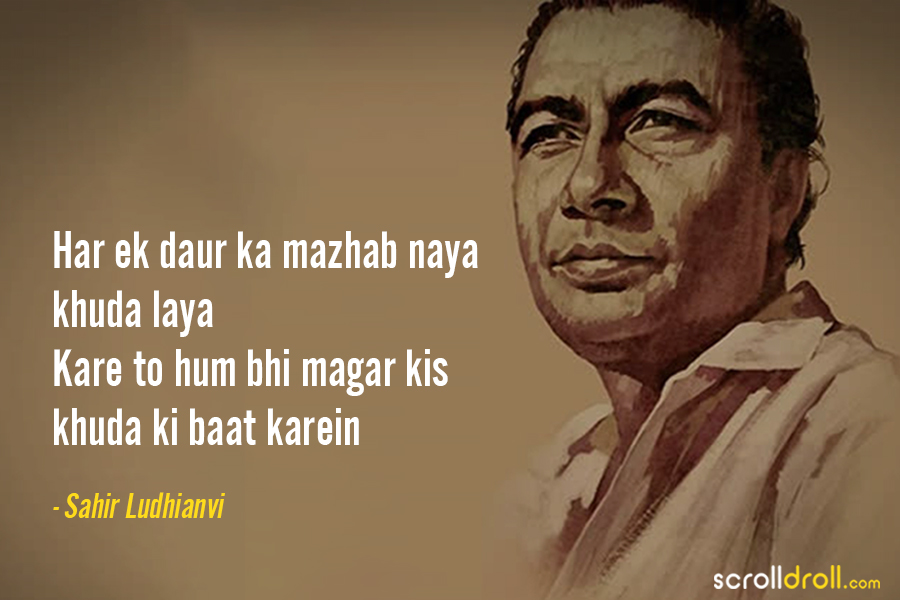 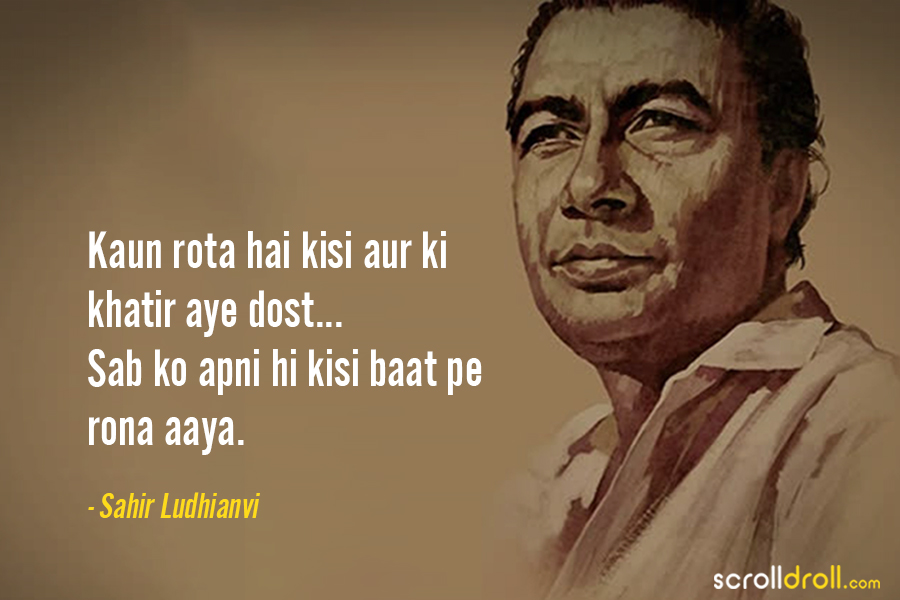 16. The light that you had lit somewhere inside me with just a smile of yours, is still burning bright. 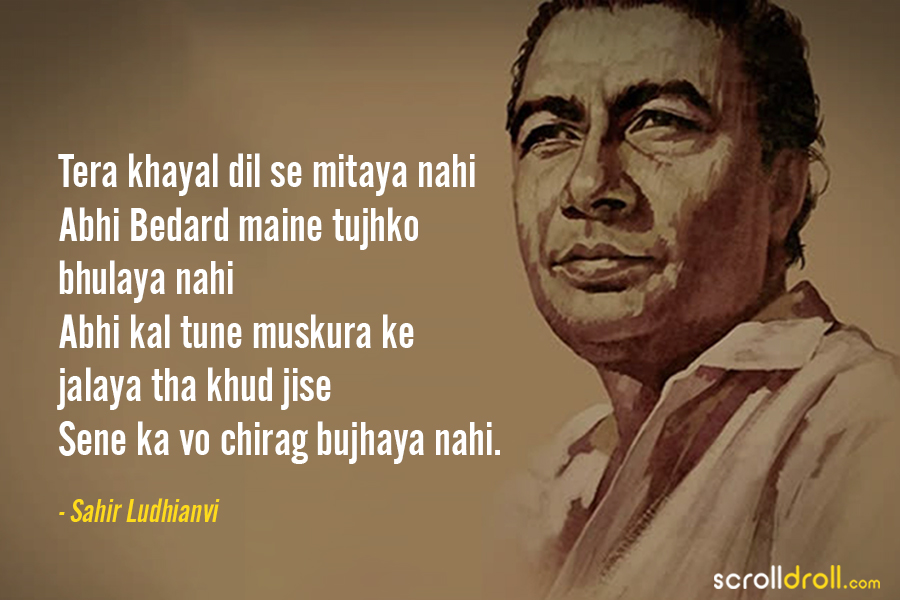 17. You are just an excuse for my catharsis. 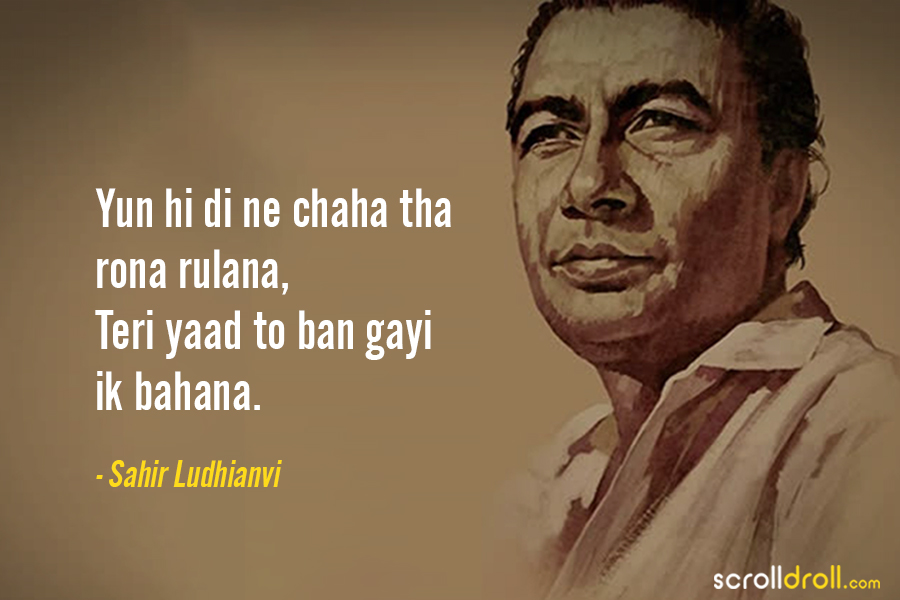 18. This is hands down one of the best shayaris by Sahir Ludhianvi. 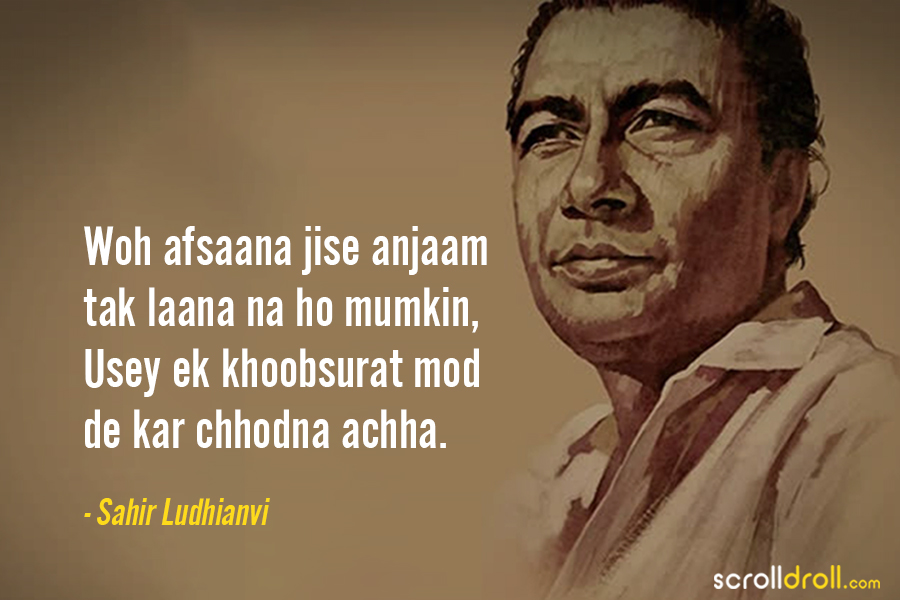 19. Everything is still there, you alone are missing. 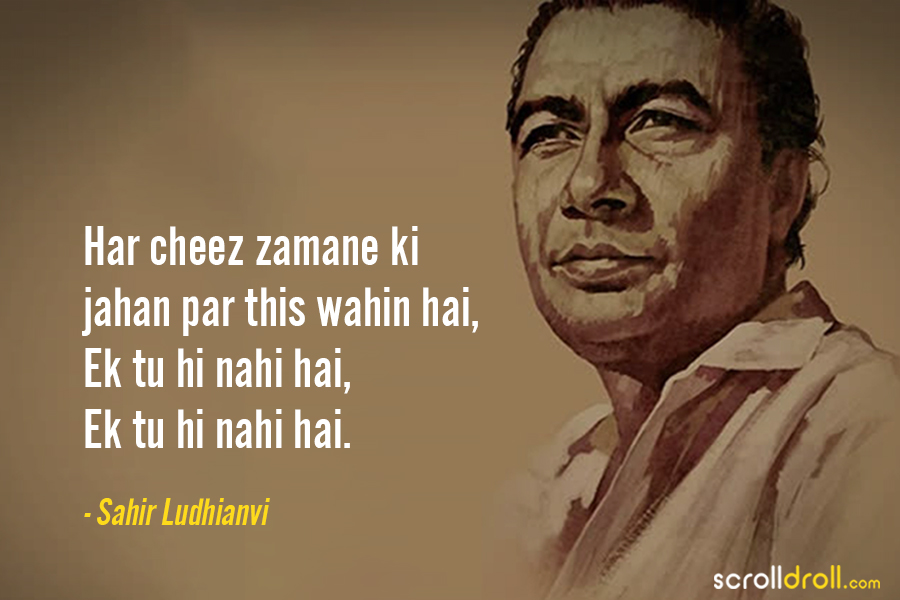 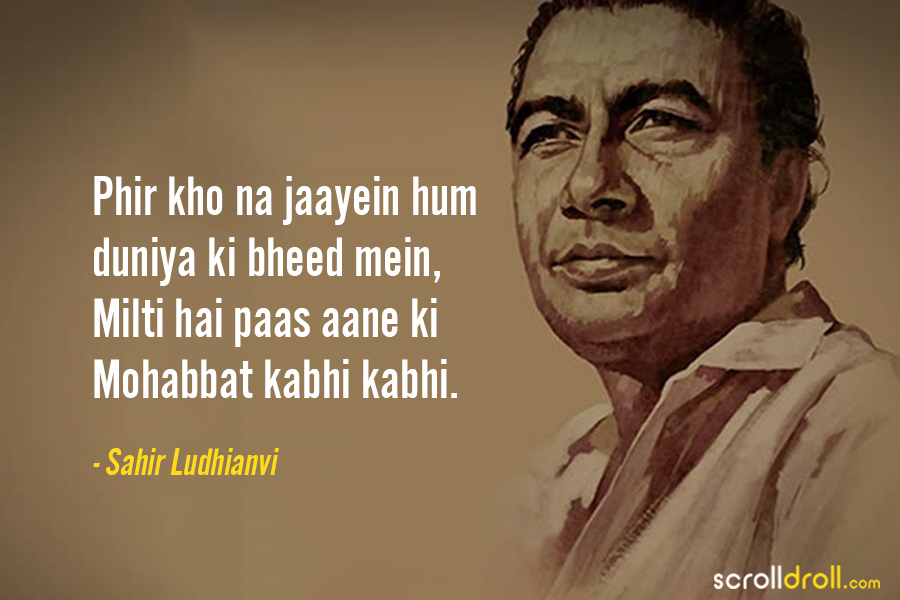 21. Hope is the best weapon against time! 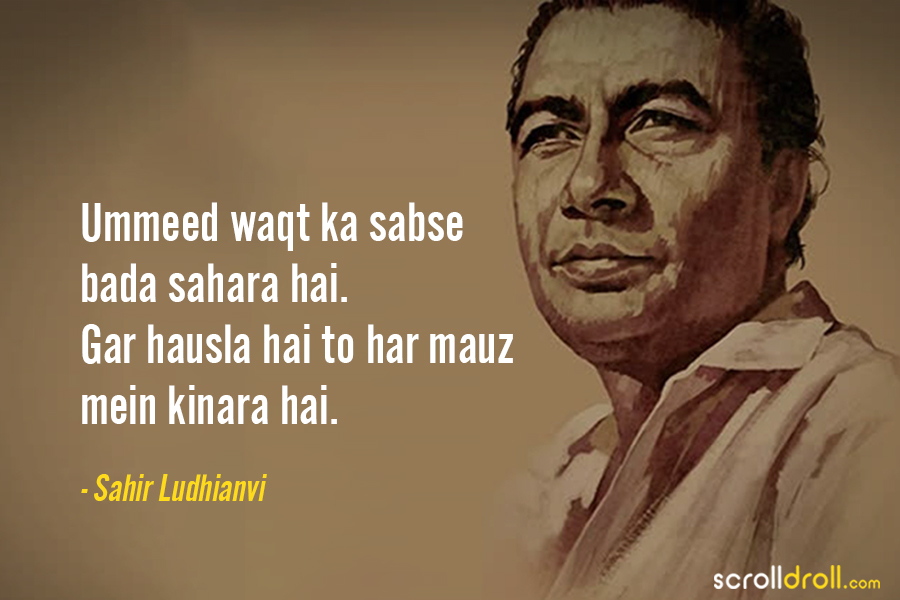 22. The language of love is spoken through the eyes. 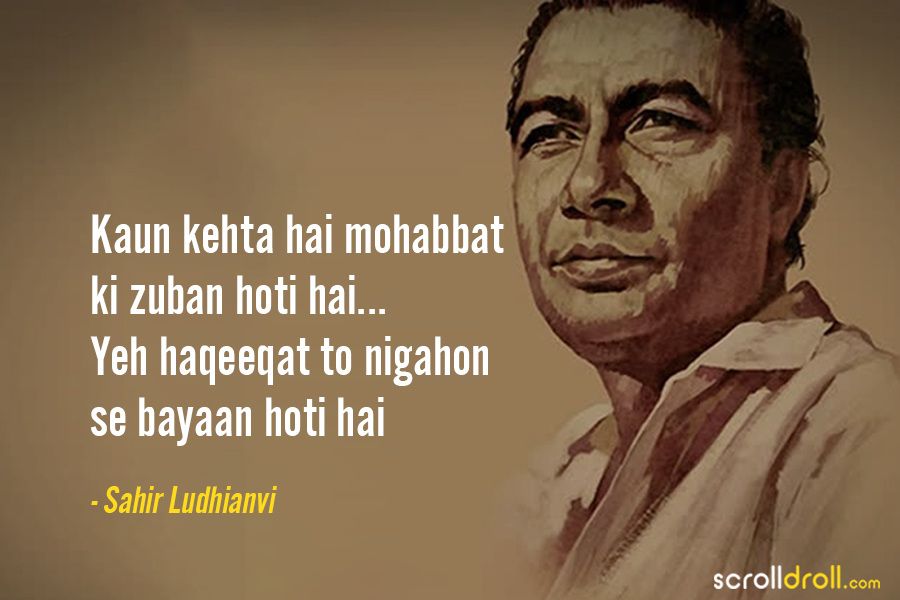 These were some of the best verses and shayaris by Sahir Ludhianvi, one of the best wordsmiths that ever breathed in this world. His timeless lyrics still pull the strings of our hearts. His words on the themes of love and hope act as the medicine to an ailing heart. Which of these shayaris by Sahir Ludhianvi did you like the best? Do let us know in the comments section.