When Volkswagen was launched in the 1930s, most Germans couldn’t afford cars. The state was already struggling with sanctions from the first world war, and on top of it, the 1920s were an especially distressing time for global economy. So when Volkswagen first came to market, cars were a novelty – most people could only afford motorbikes, and cars were typically too expensive. However, Volkswagen changed that. The name itself translates to “people’s car” (volk means folk in German), after all. To this day, Volkswagen continues to be one of the largest car manufacturers in the world. And a lot of it is owed to its marketing: beginnin from print and radio ads that ran before TVs were a thing, Volkswagen has always been known for its ability to connect with consumers with its ads. With that, we bring you 10 best Volkswagen ads that prove that they have always had great marketing.

Also read:  15 Best Anti-Smoking Ads That Might Help Someone Quit 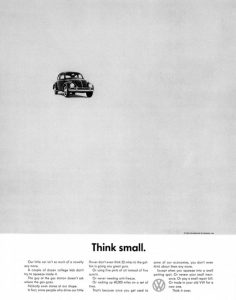 Nothing really matches the self-deprecating wit of Volkswagen’s early print campaigns, starting with its “Think Small” campaign, which was considered legendary for its time – the ad details every important aspect of the vehicle it’s trying to sell, taking up a large space and filling it with useful information.

In the 1960s, Volkswagen hired a few names that were stupdendously famous in the sporting world. One such name was Wilt Chamberlain, who at one point was considered one of the greatest basketball players in the history of the game.

Before Dustin Hoffman became an Academy award winner, he was hired by Volkswagen in a TV commercial. In this TV ad, Dustin tries to sell the viewer a Volvo just like any sales person would. 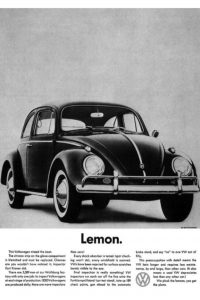 In this now iconic Volvo ad, “Lemon” refers to a car that is faulty and needs repair. This ad was, in fact, so popular that led to the making of “lemon laws” which protect a consumer’s right against products that repeatedly fail to meet standards of quality.

It is a known statistical fact that women are the ones deciding the most major financial purchases in any household. However, other than beauty products, barely anything is targeted towards women. This Volvo ad, however, appeals to the modern woman, who, even in a moment of duress, still loves her sweet ride!

6. Buying a car for someone you love

A stereotype often associated with women is that of being a bad driver – and while data points to the opposite (men are more likely to cause accidents than women, according to this report), the stereotype is here to stay for a while. This Volkswagen ad plays at the same. 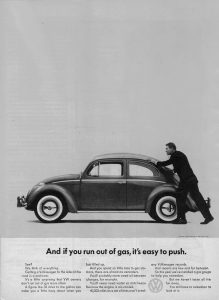 This ad proudly boasts of the fantastic mileage of 32 miles that its car offers, but just in case gas runs out, it’s easy to push!

In the popular MTV show from the 2000s, Pimp My Ride, each episode picks a young car owner who drives a car in need of some rejuvenation, and the show customizes the car for the owner. Often, these customizations were rather gaudy and in-your-face. In this Volvo ad, the host “un-pimps” the car for the owner. 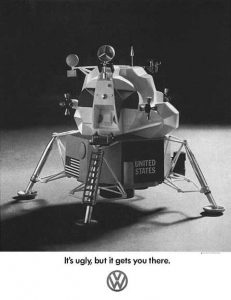 Playing again at the self-deprecating humor used in Volvo ads, this ad reads,”it’s ugly, but it gets you there.”

10. Buying a Volkswagen from an old lady

A stereotype related with Old ladies is that they are gentle drivers. Volkswagen would have you think twice before making that assumption. 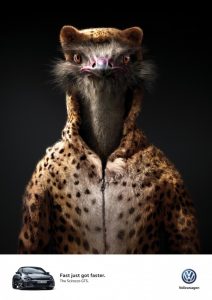 This ad showing an ostrich wearing Cheetah skin for a jacket is pretty unforgettable.

12. Planning for the future

When is the right age to buy a car? Probably after 18. But there’s no right age for planning, right? 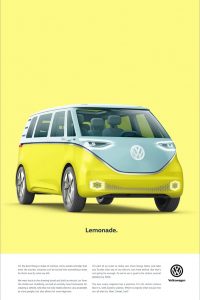 The lemon has turned into lemonade.

Can you drive a car nice enough to be a cool dad? Even to your own child?

15. This car will help you up the corporate ladder. 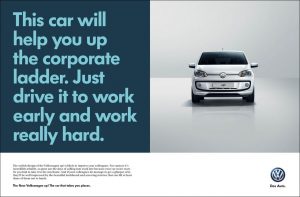 Cars can only help you so much!

16. Connect to a higher power

If you have been finding it difficult to establish a connection with the one on the roof, this Volkswagen ad  has some suggestions for you.

Everything feels slightly better when we’re cruising, doesn’t it?