India is a fascinating place which never ceases to amuse. From villages to urban cities, our country is rich in culture and has deep rooted traditions. Amidst colourful festivals and lively celebrations, there are a few practices in India that are exceptionally strange but followed with absolute devotion. So, we list down 14 such bizarre traditions of India that will shock you. 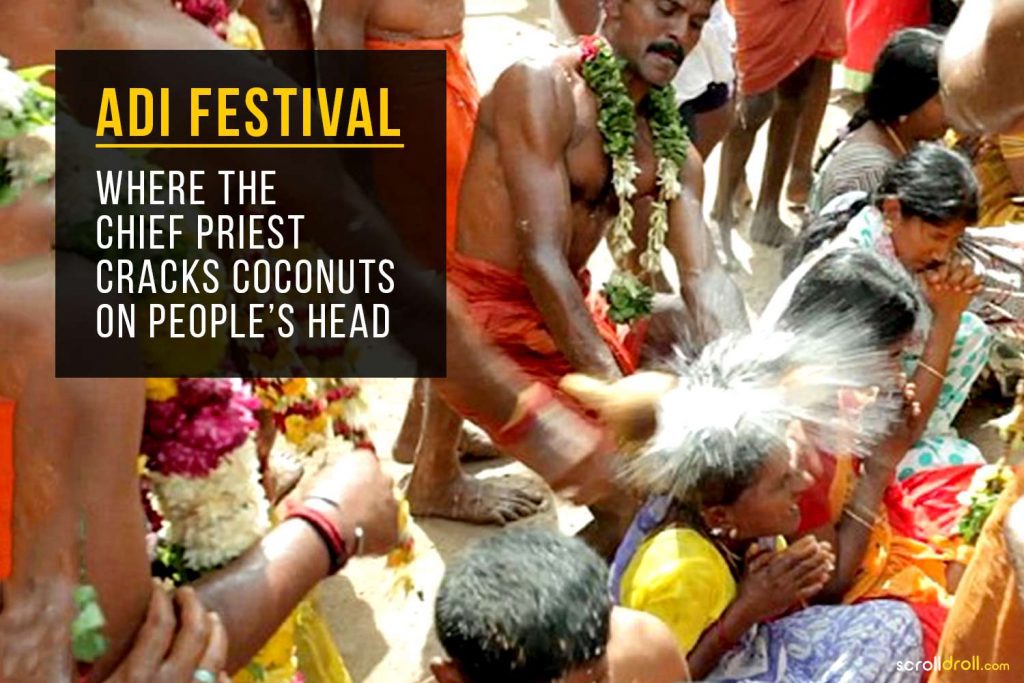 What will you do for good health and success? Will you let a priest smash a coconut on your head? Probably not! But surprisingly in a remote village of Tamil Nadu, it’s believed that cracking coconuts on one’s head will please the deity and lead the townsfolk to prosperity and well-being. Despite warnings from medical practitioners, this tradition is followed with much allegiance by locals. 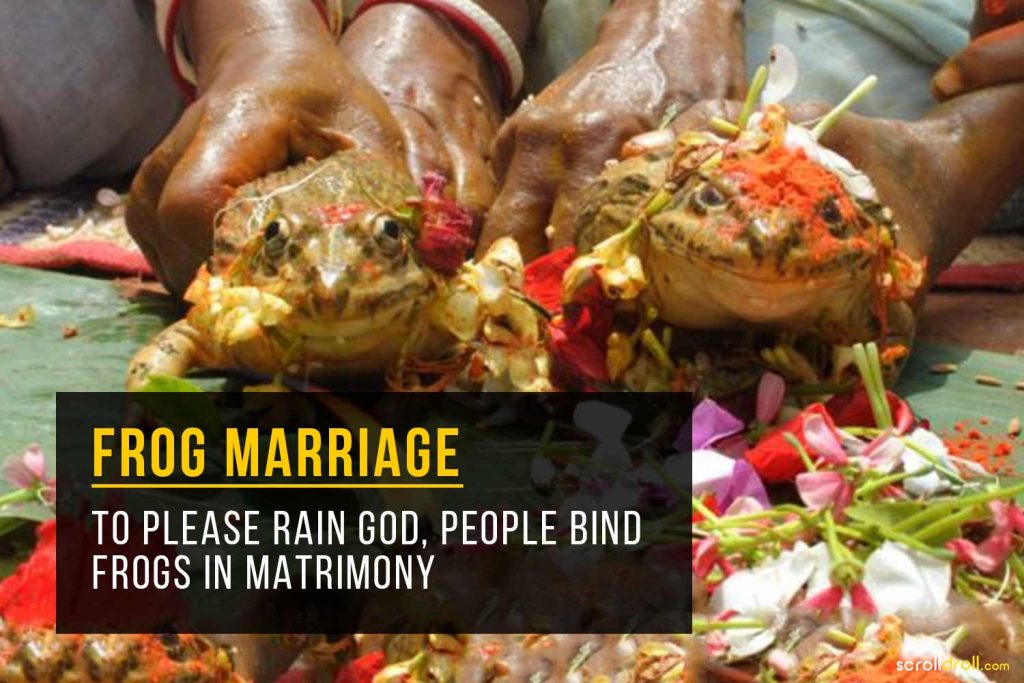 You may have heard of people marrying trees in India but ever heard of frog marriages? Apparently, Barun Devta, the rain God is pleased by frog matrimony. As believed by the village people of the Jorhat district of Assam, if wild frogs are married in a traditional Hindu wedding, it will bring an end to a prolonged dry spell and rain will pour heavily within days. It’s crucial that the wedding follows all the Hindu marriage traditions and is conducted in the presence of a priest. 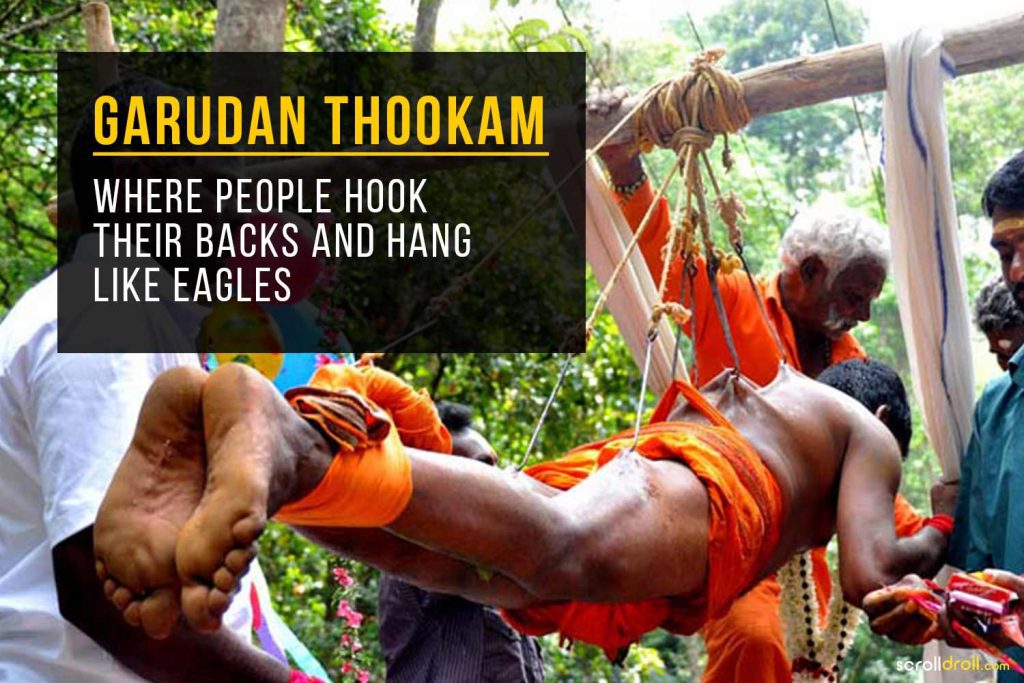 People can go to any lengths to please their much-revered deities and sometimes these rituals can take a bizarre turn. One such tradition is Garuudan Thookam in Kali temples of Kerela. Legend goes that Garuda(an eagle) was brought to Kali to satiate her thirst for blood. To represent the legend people perform a ritual dance and then hook their backs and suspend themselves in air like eagles, to please Kali! Yikes! 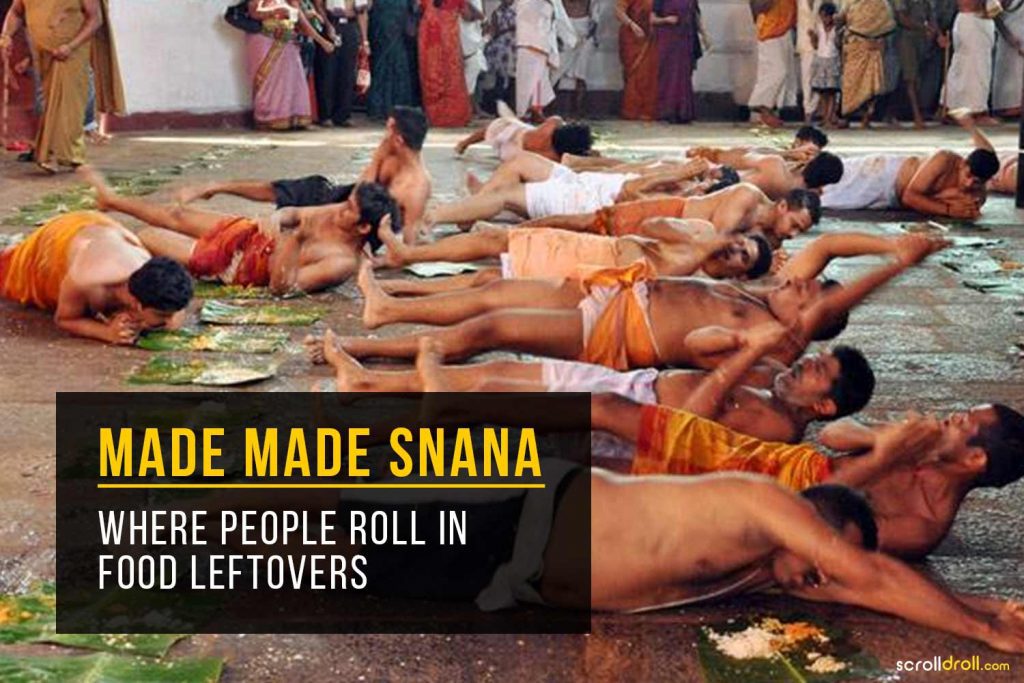 While casteism is long gone in India on paper, it sadly still prevails to date. Related to this social evil is a tradition called Made Made Snana. It is carried out in some temples of Karnataka. Devotees–people belonging to lower castes–of this festival roll over the floor in the food leftovers of people of upper caste. Despite receiving heavy criticism, the practice is still active and attracts hundreds of devotees. 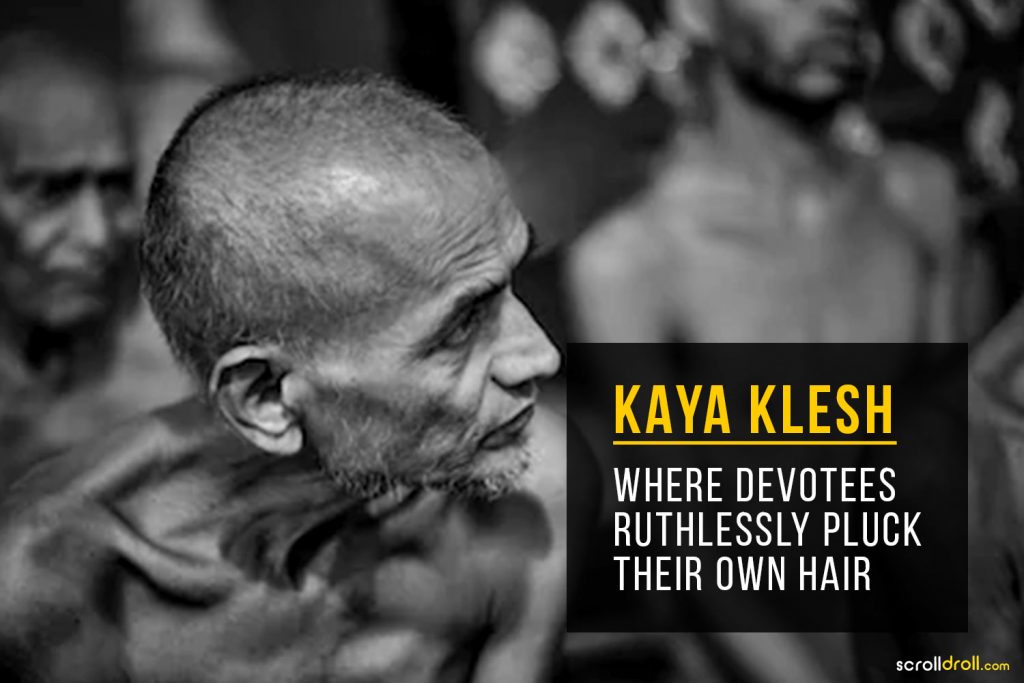 Religious practices can often take a painful turn. Jainism, a popular and widely followed ancient Indian religion, encourages one to get rid of worldly pleasures and lead an ordinary life. Staunch believers of Jainism practice a rather painful tradition where they pluck out every single strand of their hair until completely bald. The wounds are later healed from a special remedy made out of cow dung. 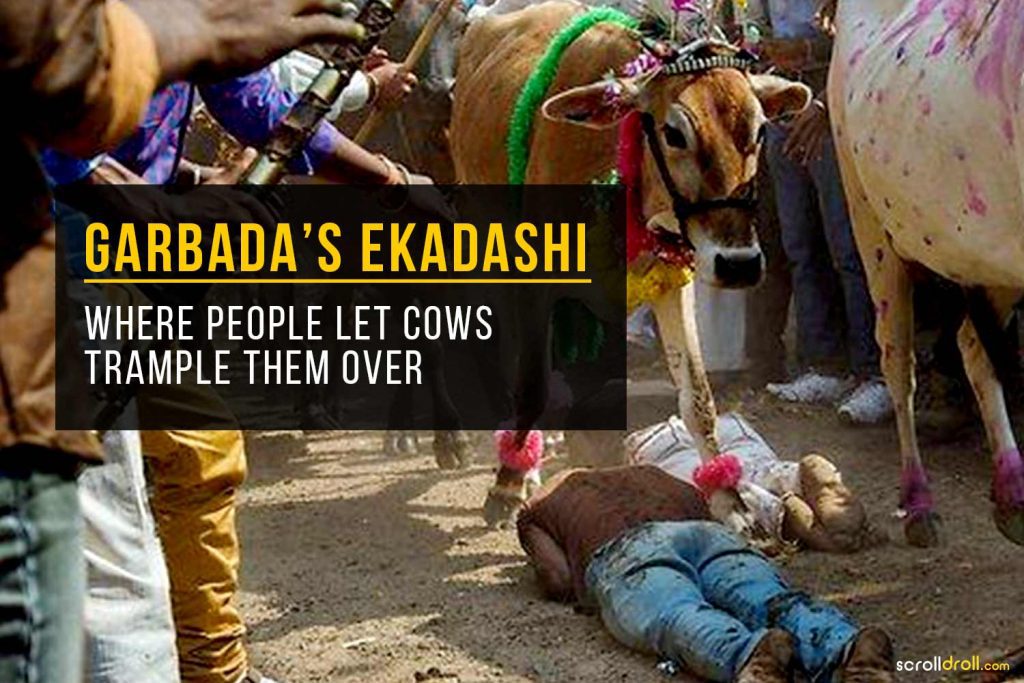 Garbada is a town in Gujarat which is home to a bizarre tradition of letting cows walk over the backs of people. Painful as it may sound, cows are considered holy in Hinduism. Hence, it’s believed that letting them trample you over will reduce your problems. Unless you have a problem with your back. Then this one may not work for you. Get it?

7. Superstition at its best 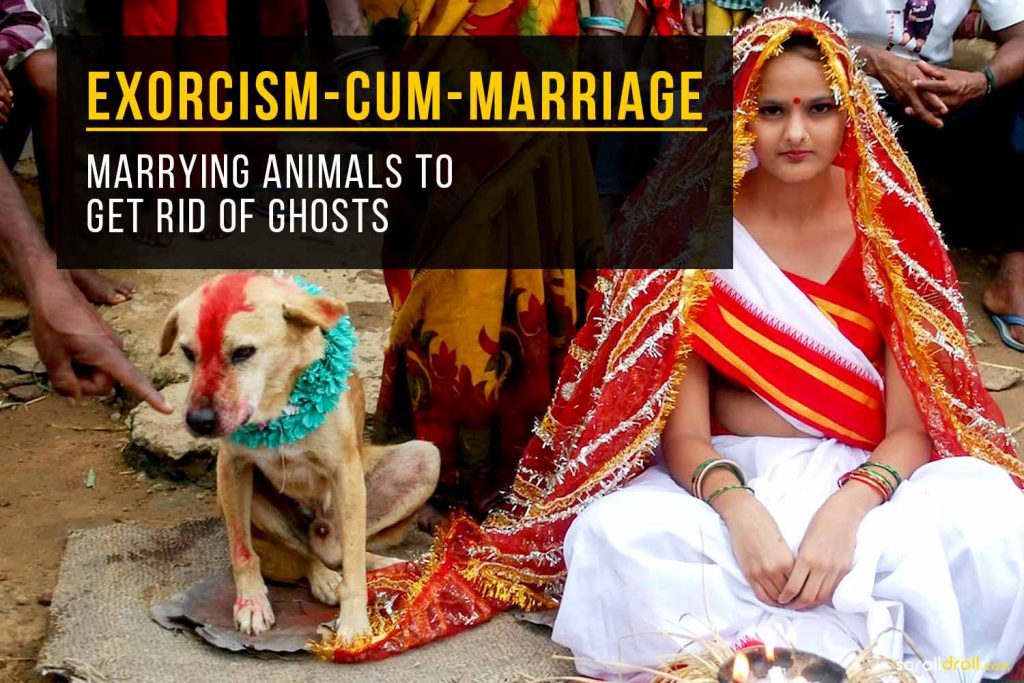 Marriage to odd objects and creatures seems to be the solution to most problems it seems. People in some remote Indian villages believe that if a girl is born with a facial deformity then she is possessed with ghosts and will have an ill-fate. As an antidote to this problem, the girl must marry an animal to exorcise herself off demons. Once that’s been done, she’s free to marry a boy. No divorce from the animal required.

8. You wouldn’t want to mess with them 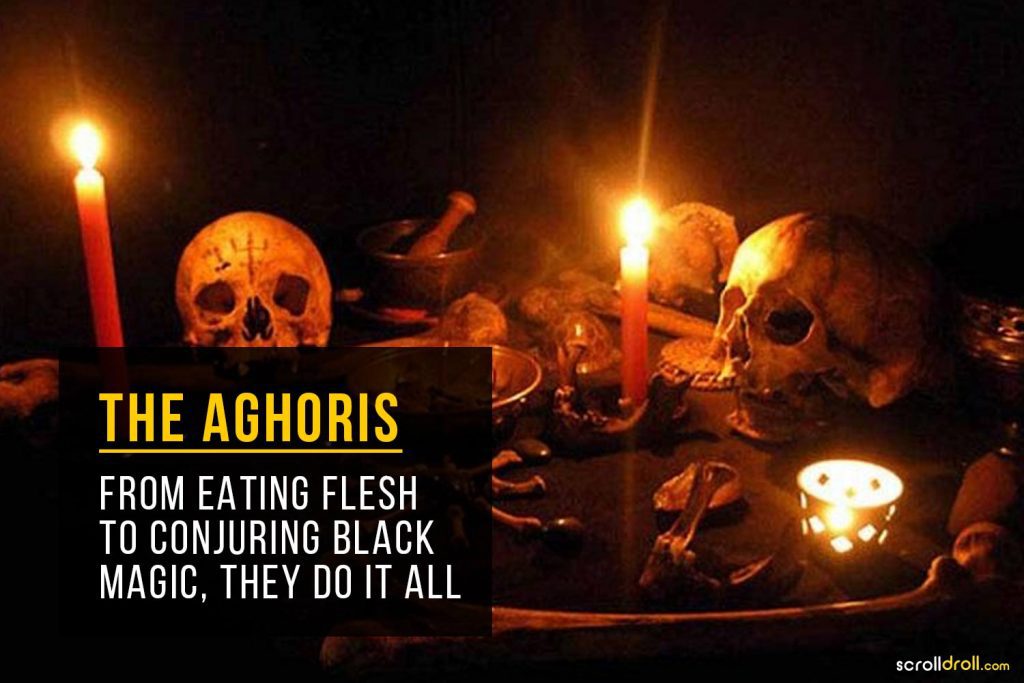 Forget Hannibal Lecter, this one is the real deal! Aghoris are followers of Lord Shiva, often referred to as the God of death and destruction. Aghoris live in seclusion and engage in a variety of gruesome activities. They are known to feast on human flesh, drink from skulls and live among the dead.

9. Babies in the air 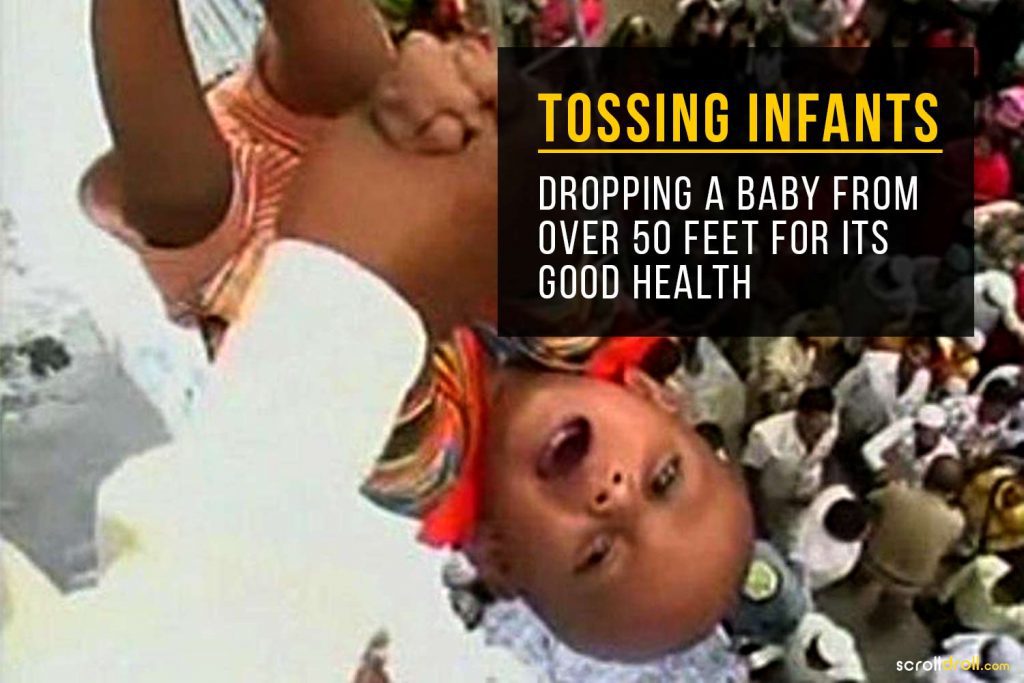 You may have seen parents playfully tossing infants in the air to make them laugh, but what happens if you add 50 feet to the toss. Just the idea of it can send shudders down your spine. However, in different parts of India, it is believed that dropping a baby from the roof of Baba Umer Dargah and Sri Santswar temple into a sheet held by the men at the ground will bring health, prosperity and good luck to it. This tradition is criticized stiffly yet practised heavily. 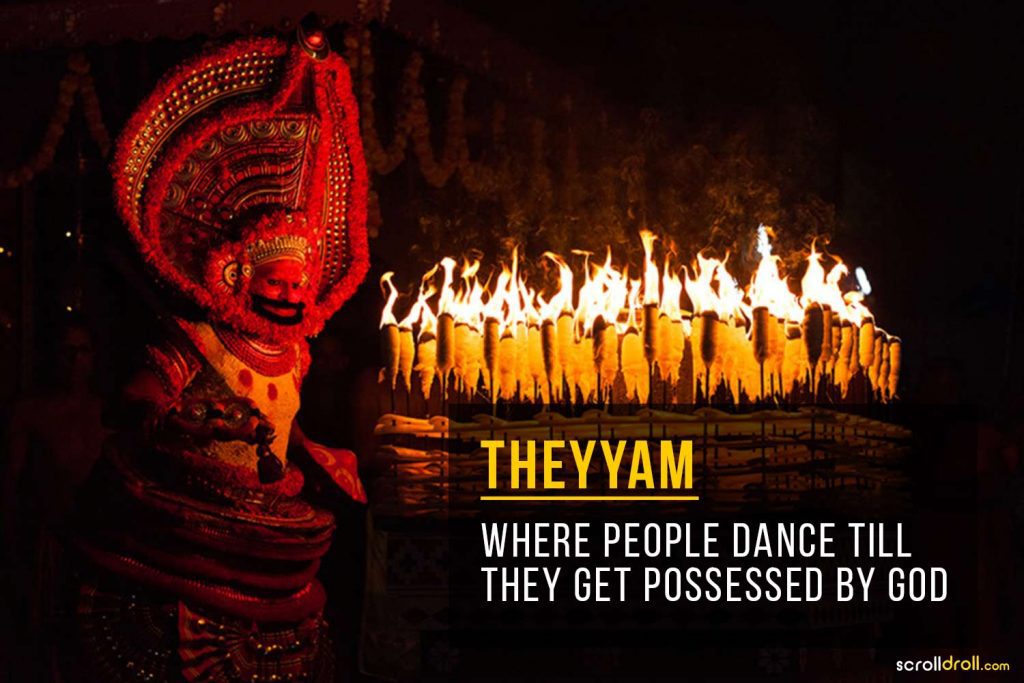 Will you believe if we told you that God can possess a human? Scientifically, maybe not. But spiritually, maybe yes. The people of Kerela practice a deep rooted ritual (dressed in heavy makeup and decorated uniforms), dancing to heavy drum beats while citing mythsand legends. As the fest grows, the dancer is believed to get possessed by a divine being or Theyyam. When possessed, the Theyyam blesses the devotees, walks on fire and performs astonishing acts. It’s one spectacular sight! 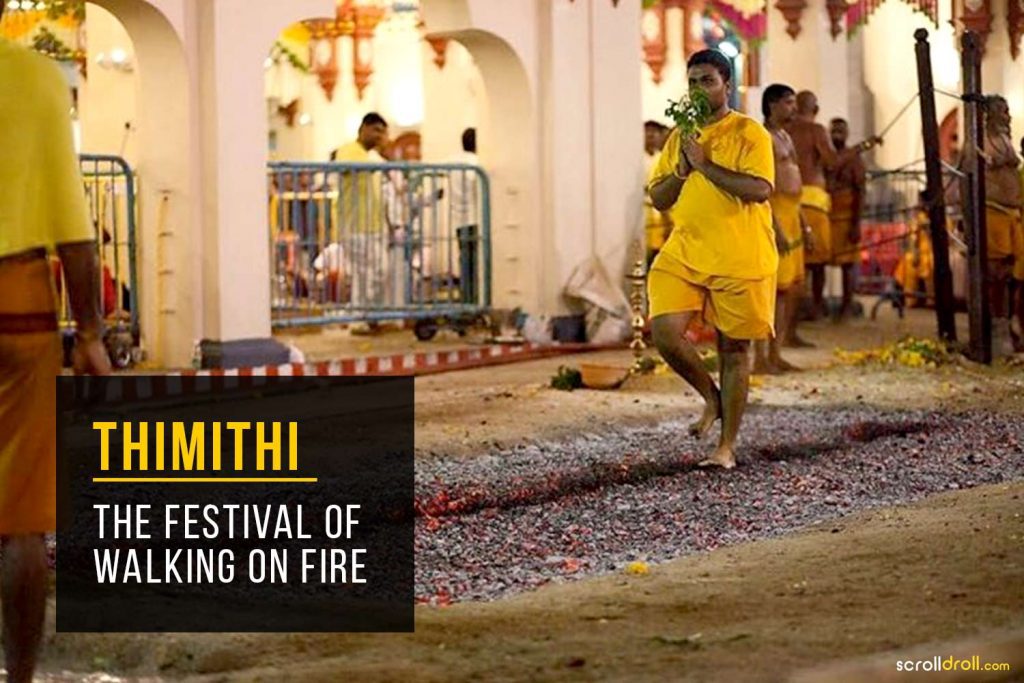 If you thought walking on fire was only Bollywood actor Jeentendra’s forte in his movie Haatim Tai, you need to watch people celebrating the festival popularly called Thimithi in Tamil Nadu. People celebrate the festival by walking barefoot on hot firewood or charcoal to honour Hindu goddess Draupati Amman. And, if you thought devotees could just run or walk swiftly through the pit filled with hot wood, you were wrong again! In order to make the goddess happy, the devotees have to walk through the pit really, really SLOW!

12. So much pain in the name of belief 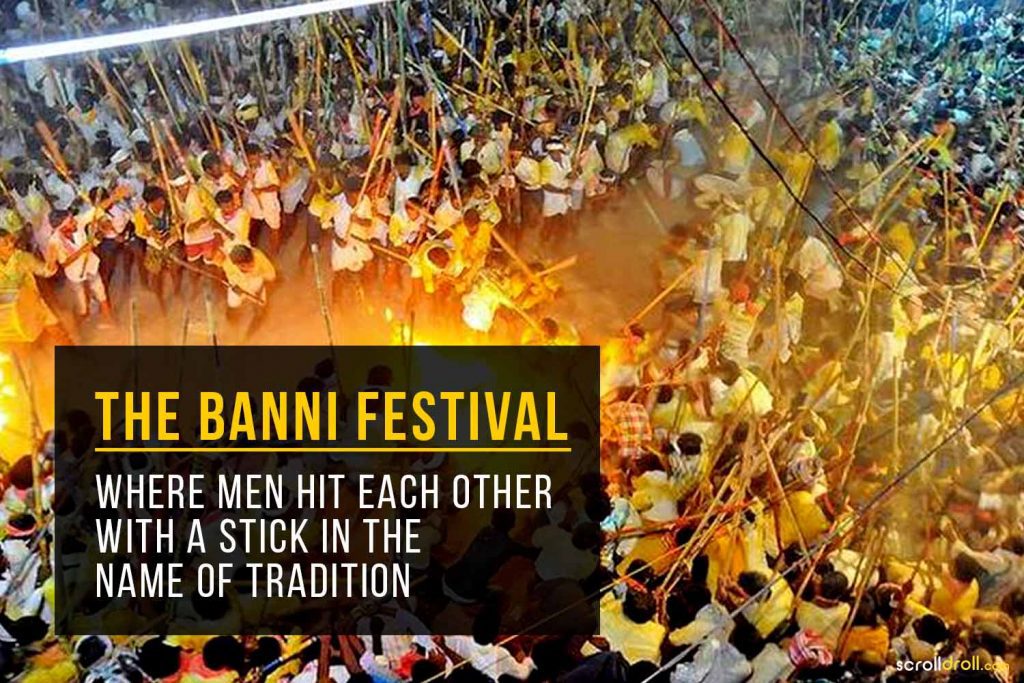 Yes, you read that right! Every year, during Dusshera the Devaragattu Temple in Kurnool district of Andhra Pradesh witnesses hordes of men hitting each other on the head with long sticks. The festival begins at midnight and continues till the break of dawn, this is done to pay respect to Lord Mala-Malleshwara. 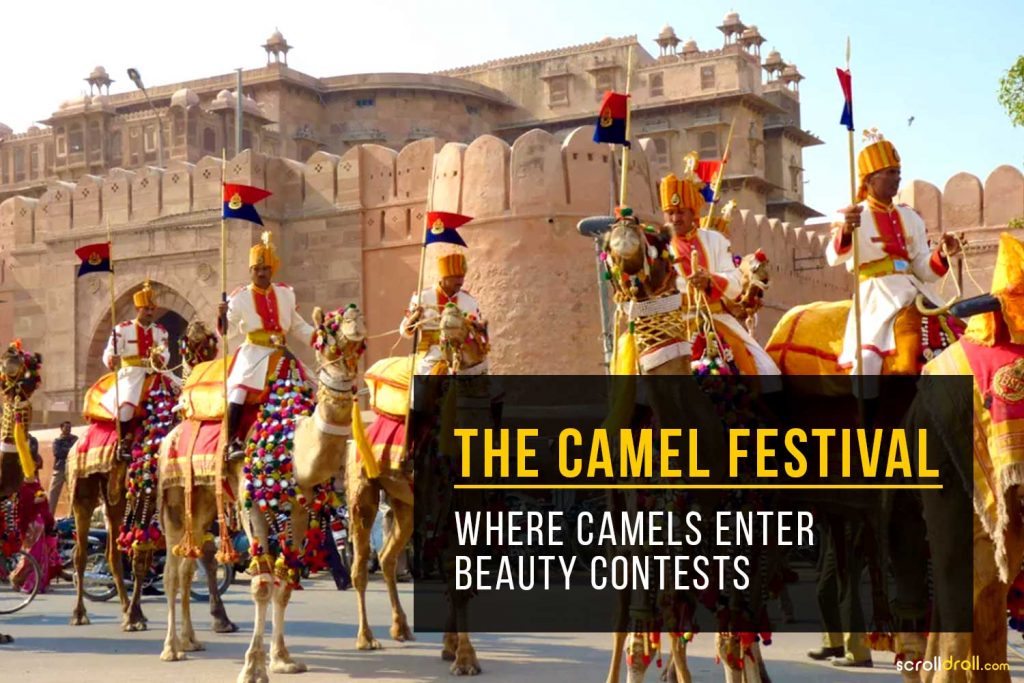 The festival is celebrated in the month of November in Rajasthan’s Pushkar city and it lasts for 5 days. During these 5 days, more than 50,000 dressed up Camels parade and compete in beauty and racing contests.

14. Let your inner animal out 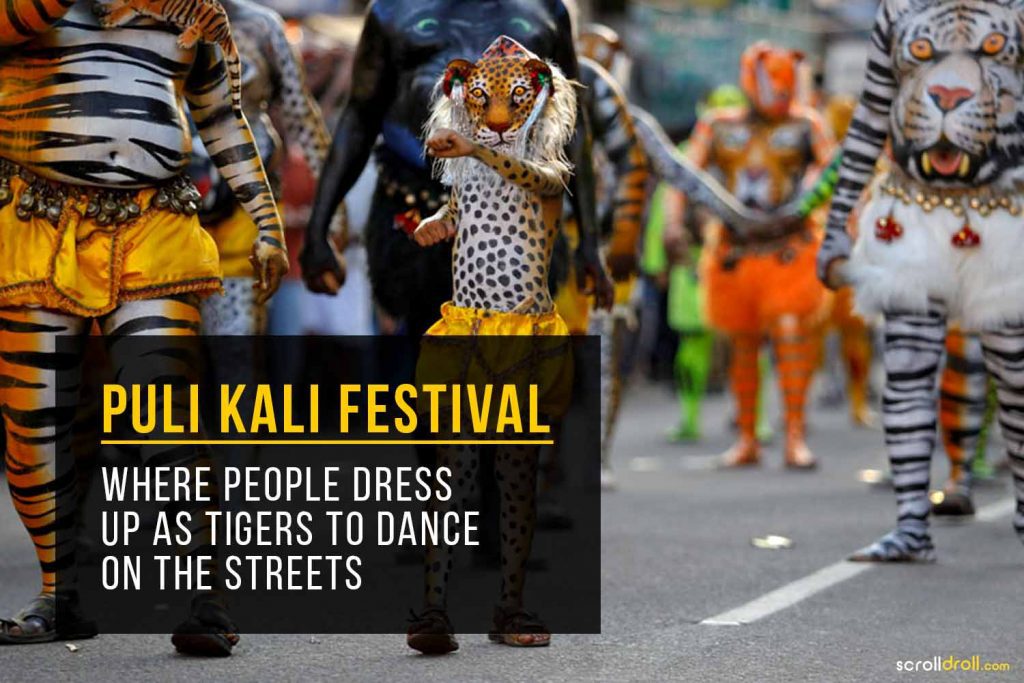 The festival is celebrated in the Thrissur district of Kerala every year where trained artists, dressed up as Tigers, perform on traditional folk songs. Although watching so many colors dancing on the streets is a sight to behold for many, the tradition still remains somewhat bizarre.

It’s fascinating to see what people are ready to do in the name of God and the pain they suffer to nurture deep rooted superstitions. Is there a way to tell that the supreme deity is pleased by all this? We doubt.

So, what do you think of these bizarre Indian traditions? Do you think we’ve missed something equally bizarre? Let us know in the comments!