Can the Wonder Mare Honeysuckle Dominate the Cheltenham Festival Again? 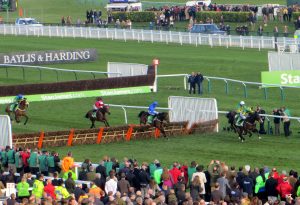 The Cheltenham Festival is the greatest showcase of national hunt horse racing in the UK, and at the center of the meeting, there are four Championship races, which are fiercely contested. One takes place on each day of the meeting, and the first, is the Champion Hurdle, a two-mile race that requires both jumping ability and speed.

The 2021 renewal was dominated by the wonder mare Honeysuckle, stamping her authority on the field to come home and take the prize. Since then, she’s been even better, and with a very similar field taking her on again in 2022, expectations are high. Bookmakers agree too, the latest Cheltenham betting odds show she is the 8/11 favorite to win the race again. Part of that is down to the field, she is going up against, but do not underestimate her ability, she has comfortably beaten everything put in front of her so far.

The very best Champion Hurdle winners over the past few decades have all managed to win the race on multiple occasions, can Honeysuckle join them by winning again in 2022?

There is a lot to be said about the rest of the field that will head to post with Honeysuckle. Horses such as Appreciate It and Teahupoo have performed well, but have not really taken the racing world by storm to throw down their challenge in this division. We saw Appreciate It win the Supreme in great style last season, but remember, this was never the plan and is only running here because of an injury that prevented him from going chasing.

Elsewhere, former winner Epatante is a shadow of her former self and has a mountain to climb to give Honeysuckle a race, while other contenders such as Adagio, Tommy’s Oscar and Zanahiyr are all horses who would be a far bigger price had they contested this race in years gone by against better fields.

That shouldn’t take anything away from Honeysuckle though, she can only beat what is in front of her.

Are We Seeing a Great Champion?

In preparation for the Champion Hurdle, in February we saw Honeysuckle win a third Irish Champion Hurdle title. Not only did she win well that day, as expected, but that was her 14th consecutive win in a row, showing that she keeps coming back time and time again to beat her rivals.

Not only are we seeing a horse win when it matters, on the big days such as at the Cheltenham Festival, but we are seeing her constantly come back and win races in between. It is this longevity, and the consistency we are seeing on the track from her that helps this horse stand out from the crowd like a true champion, and probably one of the greatest of all time over hurdles.

Next up, she tries to go into the history book as a dual Champion Hurdle winner, and after that, there may be no stopping her for some time.