Since India became independent in 1947, it has faced many tumultuous years marred by war, with Pakistan being more or less a constant adversary. We have lost hundreds of men to war, and while all of them must be remembered, there are some stories that become etched in the national consciousness because of their depth. One such story is that of Captain Vikram Batra – a national hero who died saving the life of his man and received the Param Vir Chakra award for his bravery. 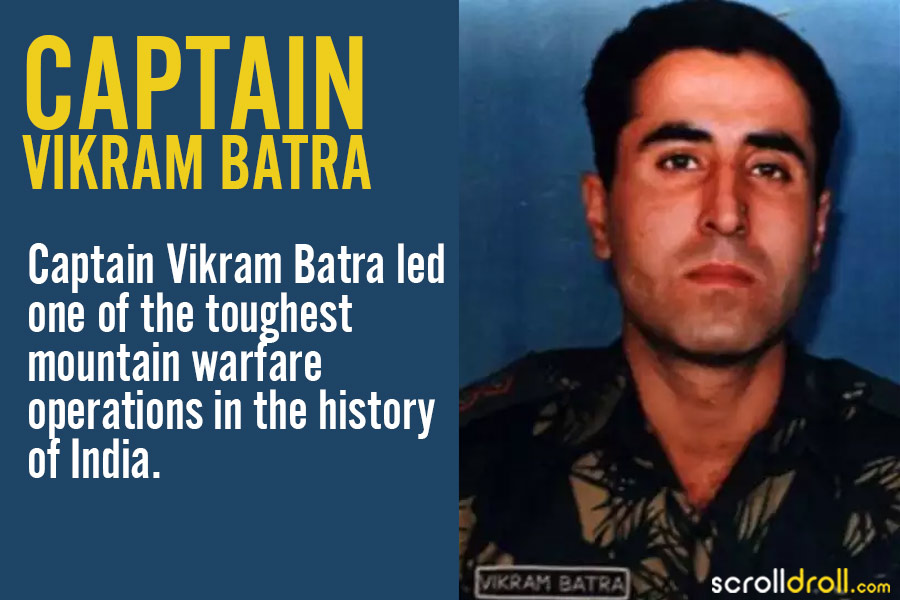 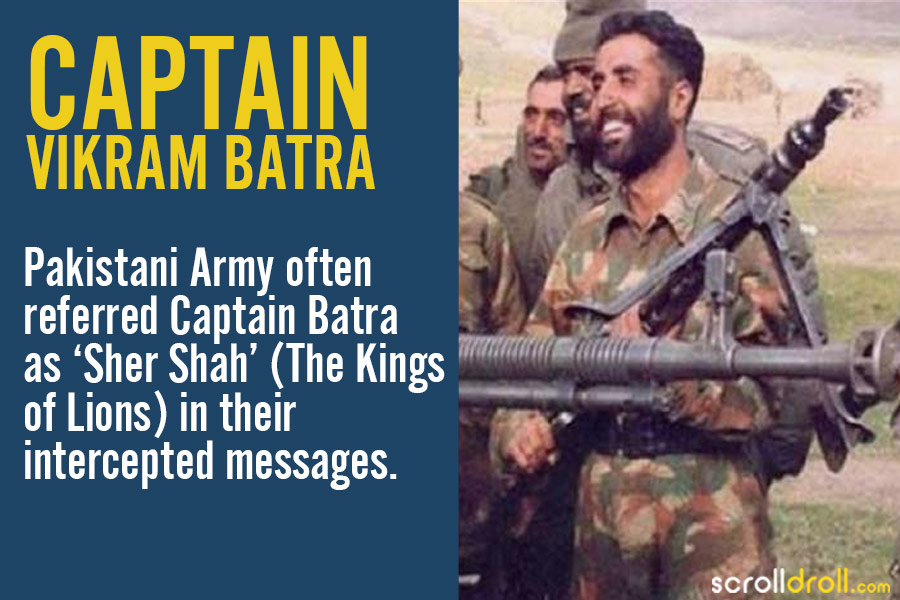 Captain Vikram Batra was born in Palampur in Himachal Pradesh to a school principal, Girdhari Lal Batra. He had an identical twin brother and two sisters. Batra is remembered affectionately as one of the most popular boys at the school at his time – he was an all rounder who excelled in studies and was good at sports as well. Both he and his brother represented their school at Table Tennis nationals. Vikram knew karate as well. 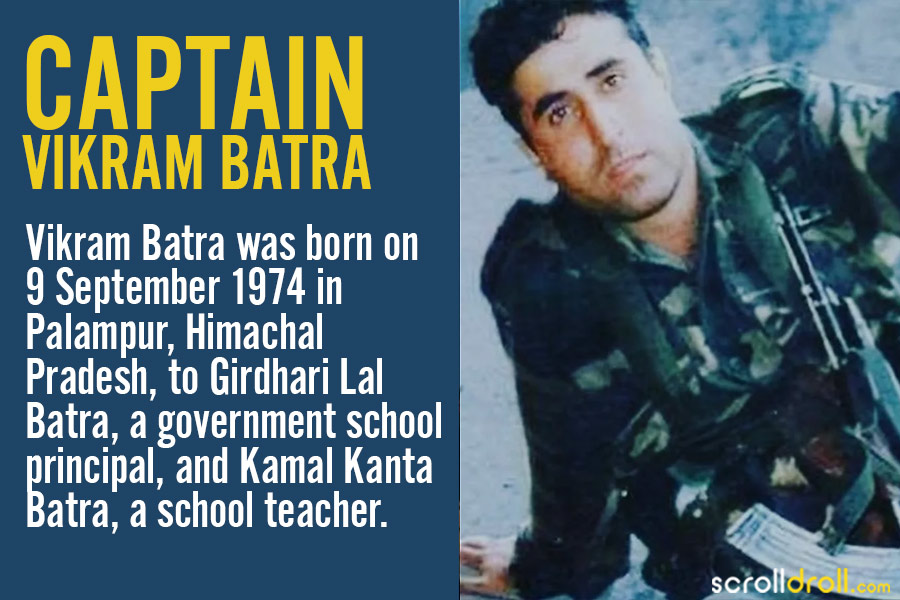 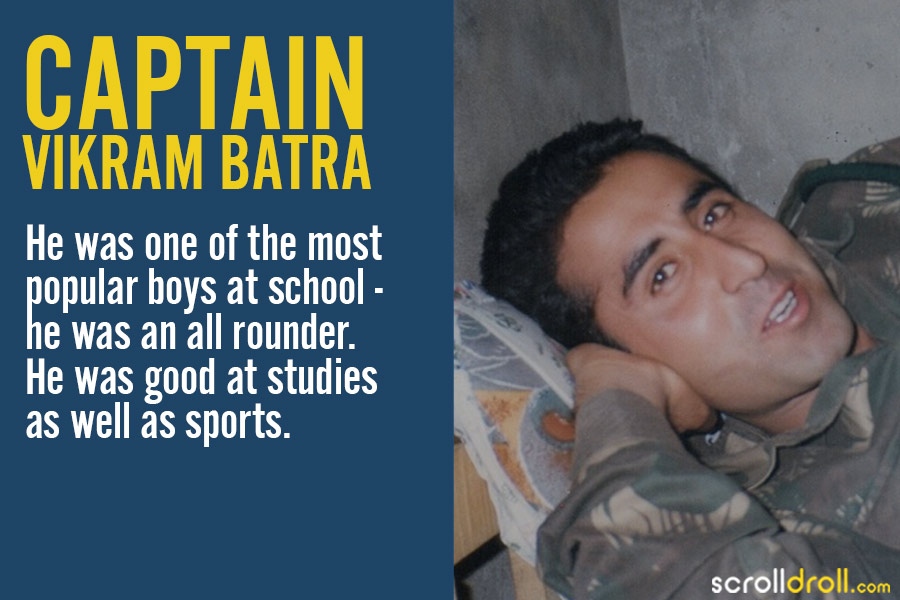 Vikram was always interested in joining the army – he had a deep love for his country and wanted to serve it. After completing his school education, he enrolled himself into a BSc in medical sciences. While at college, he joined the air wing of NCC. He won the title of best cadet in the Punjab directorate during the NCC camp. 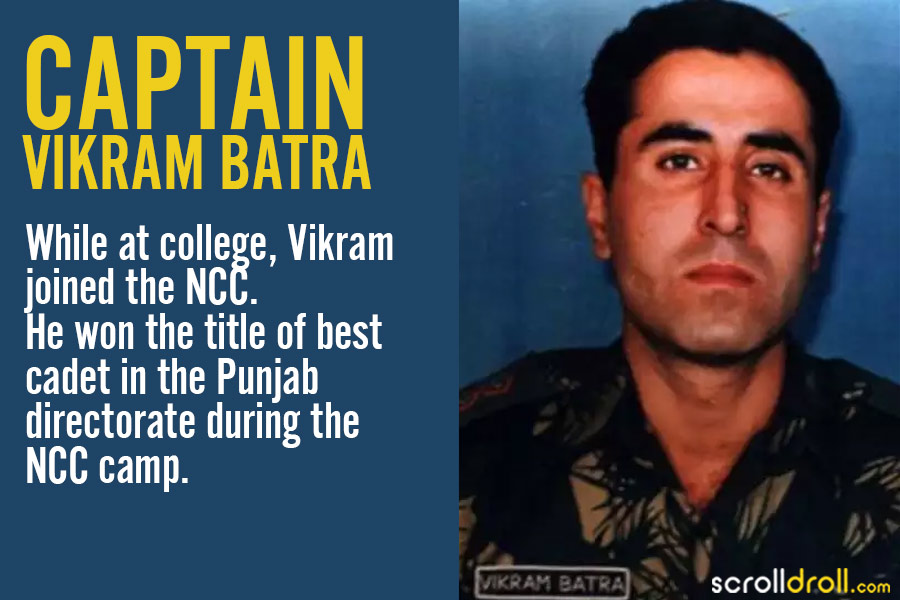 After graduating, Vikram told his parents he wanted to join the army – which was hardly a surprise to his parents. Vikram was also offered a lucrative job in the merchant navy at a shipping company in Hong Kong, but Vikram declined in favour of joining the army. In 1996, Vikram passed the CDS (Combined Defence Services) exam and was selected at the Services Selection Board in Allahabad. He was also amongst the top 35 candidates in the Order of Merit. 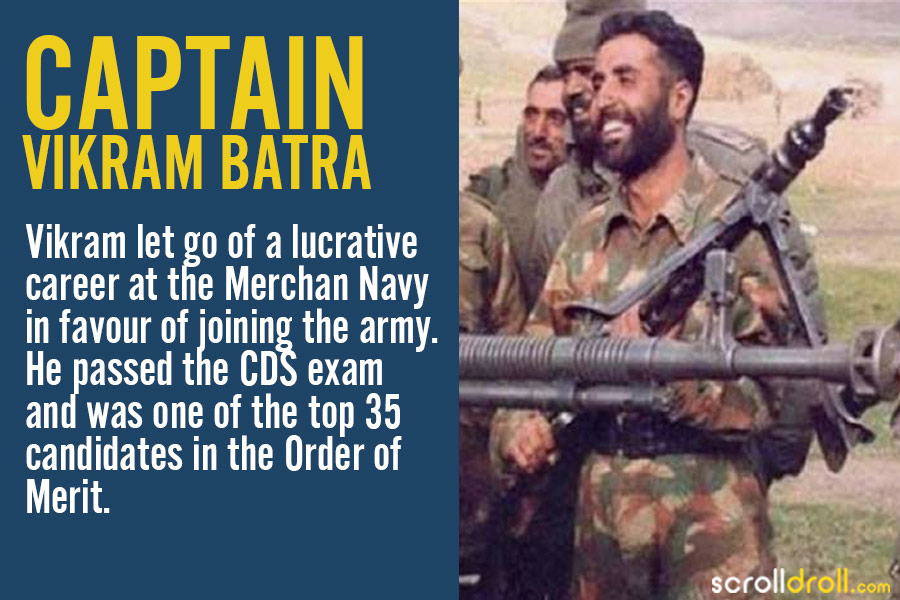 Vikram joined the Indian Military Academy at Dehradun in June 1996 in the Manekshaw battalion. After completing his training, he was authorized as a lieutenant in the 13th battalion, Jammu and Kashmir Rifles (13 JAK RIF). After his training, he was posted in Sopore, Baramulla district in J & K. He was later sent to Madhya Pradesh for the Young Officer’s course where he trained another five months and was awarded an alpha grading.

During his time in Kashmir, he had many encounters with militants. During one such encounter, a bullet that was fired at him only grazed his shoulder and killed the soldier behind him instead. His sister recalls being called up by him, with him lamenting and saying, “Didi, it was meant for me and I lost my man.” 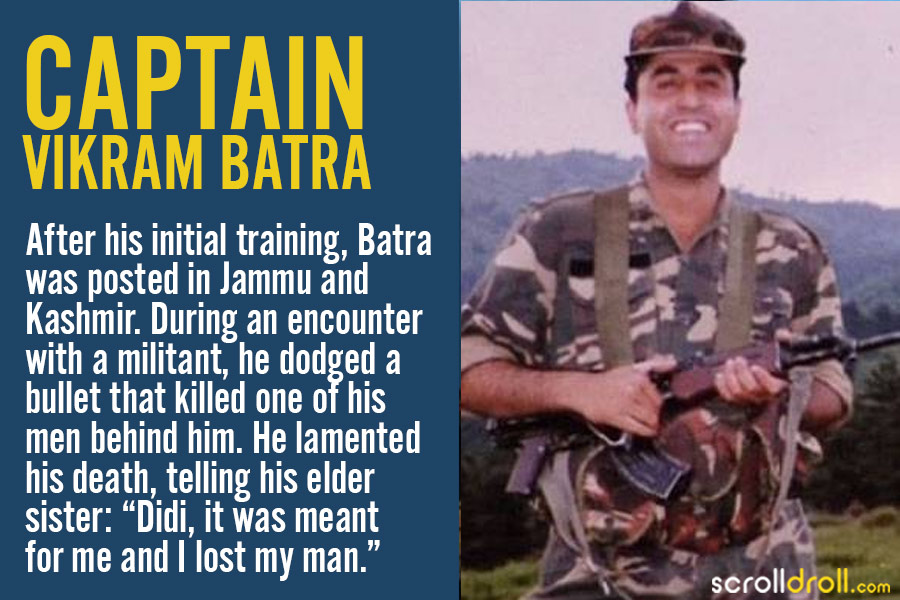 Every time Vikram would come to Palampur on leave, he would visit the Neugal Cafe every time. On one such visit in 1999 when Batra was on leave for Holi, he met his friend Dimple, who told him to be careful in the war. To this, he replied, “I’ll either come back after raising the Indian flag in victory or return wrapped in it. But I’ll come back for sure.” 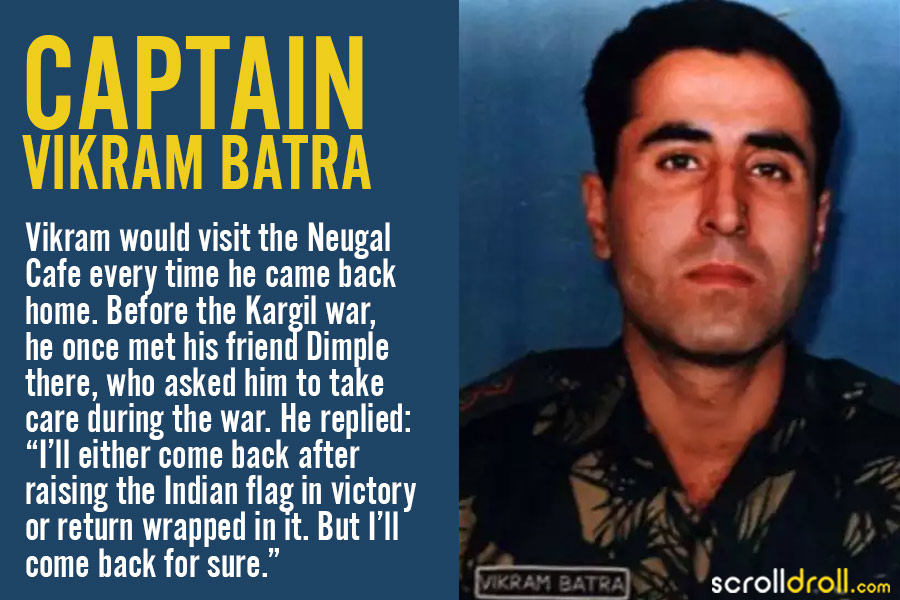 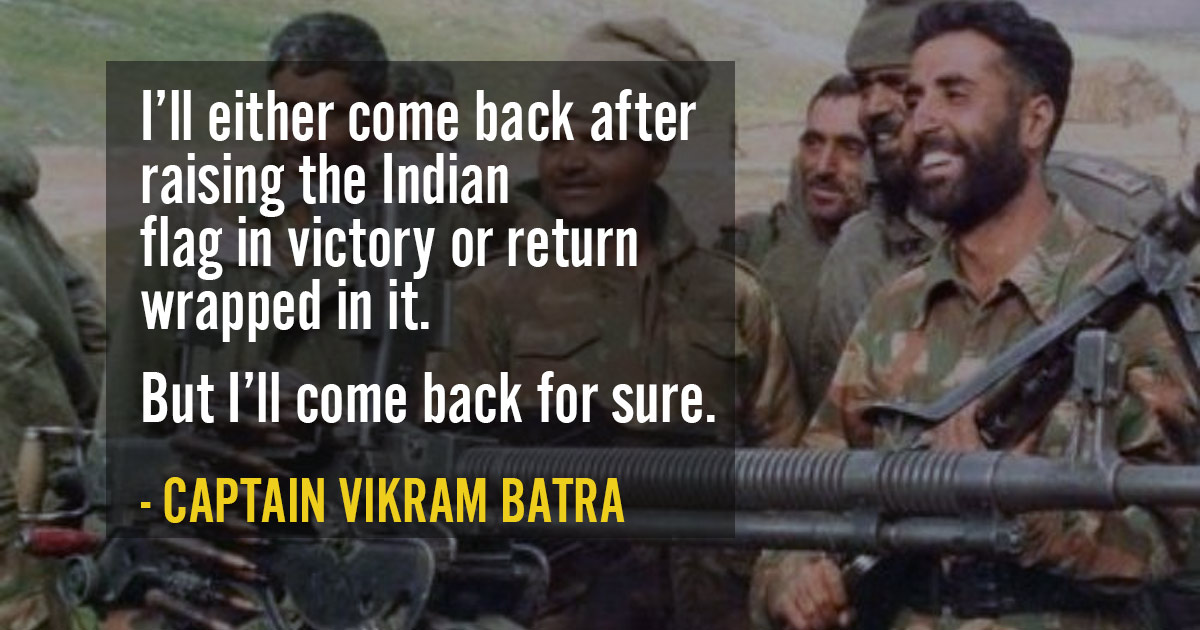 After the leave, Vikram’s battalion was headed towards Shahjahanpur in UP. However, with the developments in the Kargil War against Pakistan, his battalion had to change its course and move to Dras in Jammu and Kashmir instead.

Once his battalion reached Dras, it was placed under the command of 56 Mountain Brigade, and was ordered to act as reserves to the 2nd battalion, Rajputana Rifles (2 RAJ RIF) during their attack on Tololing mountain. On 13th June 1999, RAJ RIF successfully captured Tololing after several failed attempts by 18 Grenadiers. After the capture, 13 JAK RIF marched from Dras to Tololing, and eventually reached there in 12 hours. 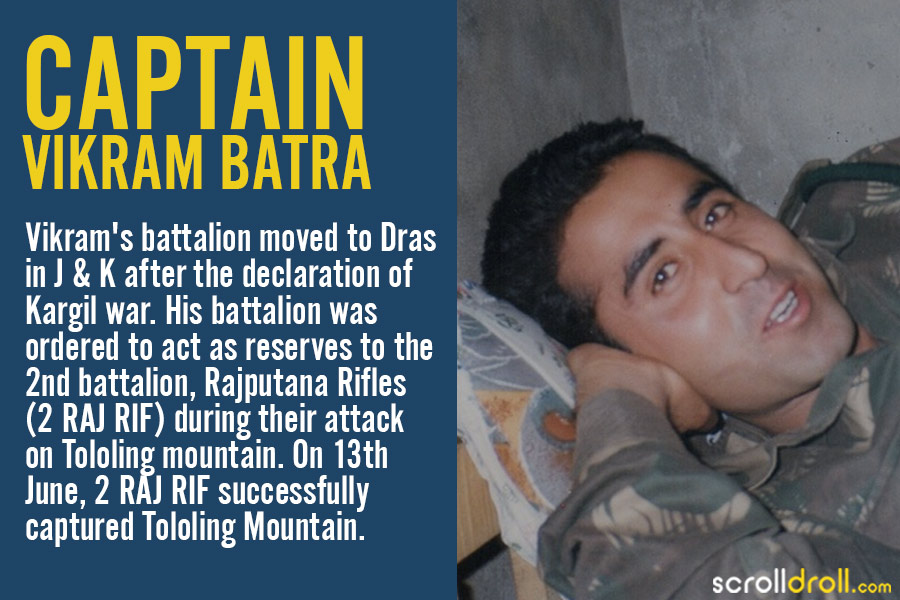 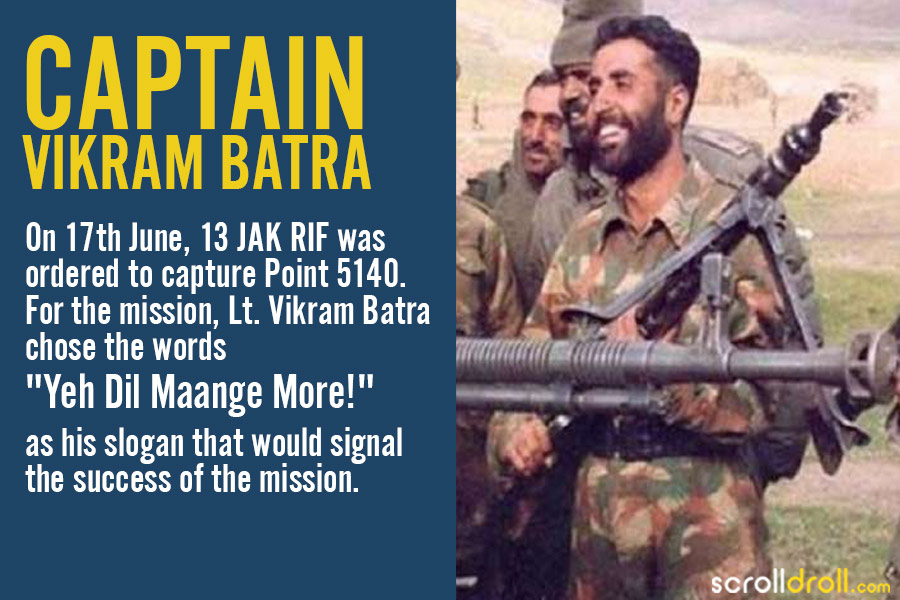 When Lt. Batra and his men climbed the rock-cliff, they were pinned by the enemy with machine gun-fire. However, they braved the swarm of bullets and continued to climb, and hurled grenades at the machine gun post once atop. Batra single-handedly killed three enemies in close combat, and D-coy collectively killed at least 8 Pakistani infiltrators. However, Batra was severely injured in this mission. Once done, he radioed his command post, saying the words “Yeh Dil Maange More!” 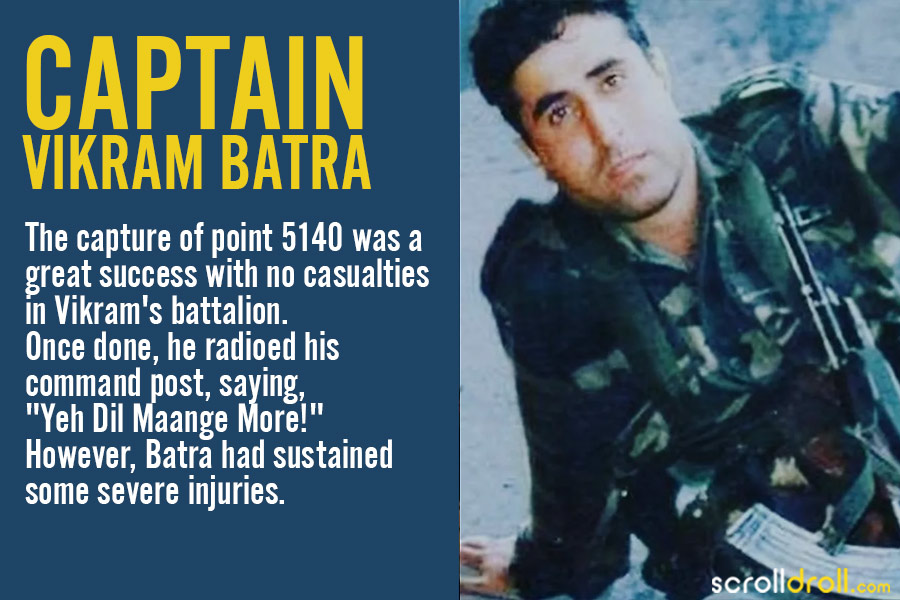 After the capture of Point 5140, Batra was promoted to the rank of Captain. 13 JAK RIF moved to the Mushkoh Valley on 30th June and was placed under the command of 79 Mountain Brigade. Because of the presence of National Highway 1 in this region, a stretch of 30km-40km was easily observable by enemy troops. It became pertinent to capture Point 4875. Because of his injuries, Captain Vikram Batra did not join the rest of his team on this mission for the first few days. 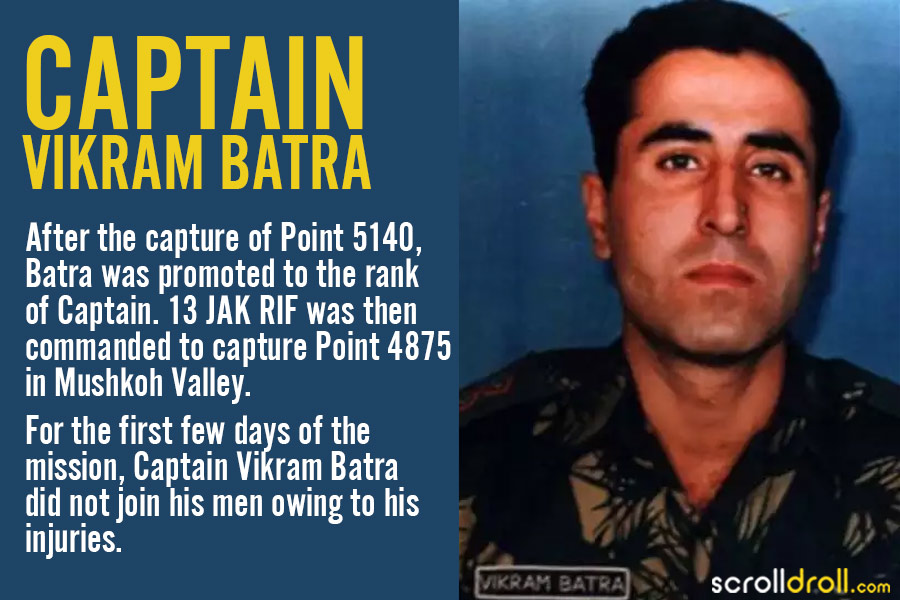 After Point 5140 was captured, it became important to capture the adjacent peak, Area Flat Top, which 13 JAK RIF had already captured by 5th July, but enemy troops immediately launched a counterattack. The Indian and Pakistani forces were deadlocked in a battle of will, with both refusing to give up. Seeing the predicament of his team, Captain Vikram Batra, despite his ill health, volunteered to help. Inspired by his bravery, several other soldiers joined him. The men at the top of the peak were informed of this development through wireless message, and the Pakistani army also intercepted this message. They knew who “Sher Shah” was. It was the code name for Vikram, who by then had attained legendary status on both sides of the border. 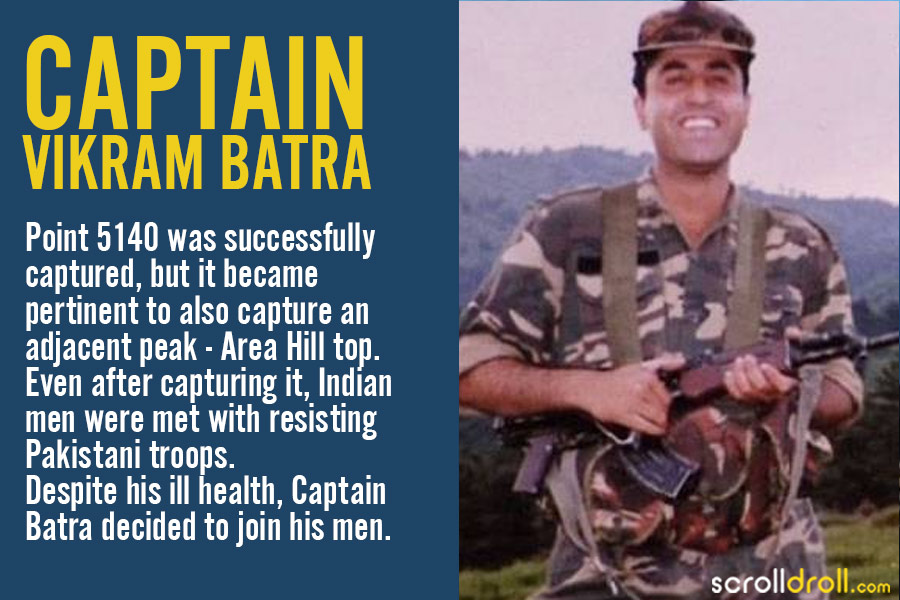 Because of the formidable features of the peak, it took several days for the soldiers to finish their climb. To make things worse, it started snowing by the end of their climb, and the area had zero visibility due to fog. Captain Vikram Batra and his men had to destroy several machine guns post on their way. On the morning of 7th July, the soldiers reached a ledge that already had Pakistani men onboard. They did not have anywhere else to go and had to engage in a full frontal attack. 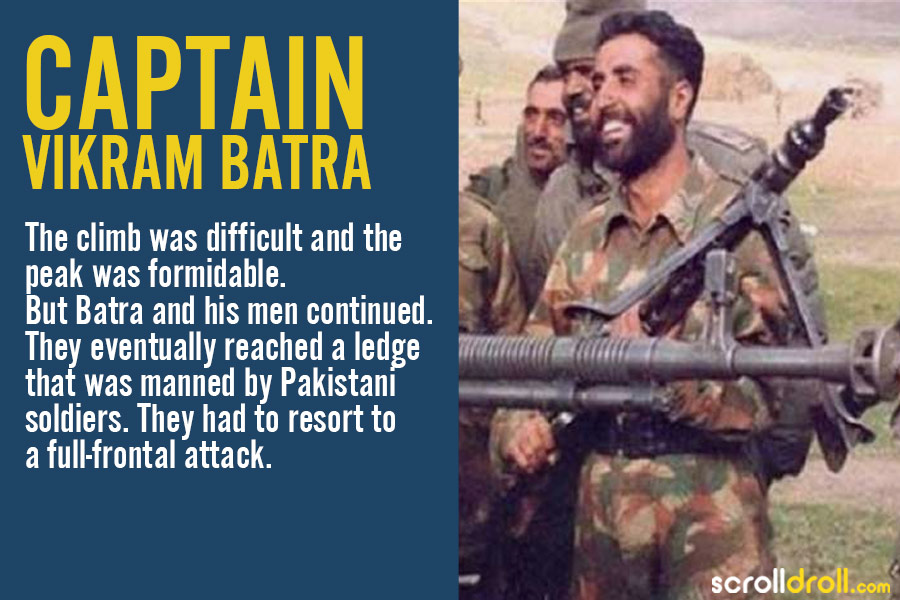 Despite great risk to their lives, Captain Vikram Batra and his men decided to face the enemy. Despite being grievously injured, Batra ended up killing 5 Pakistani intruders himself. The attack resulted in the deaths of 7 Pakistani soldiers in all. The rest of the intruders began to retreat. However there was still a machine gun nest at the end of the ledge which was manned by four men. Batra charged at them and killed all four men. However, he quickly realised that one of his own men had also been shot. 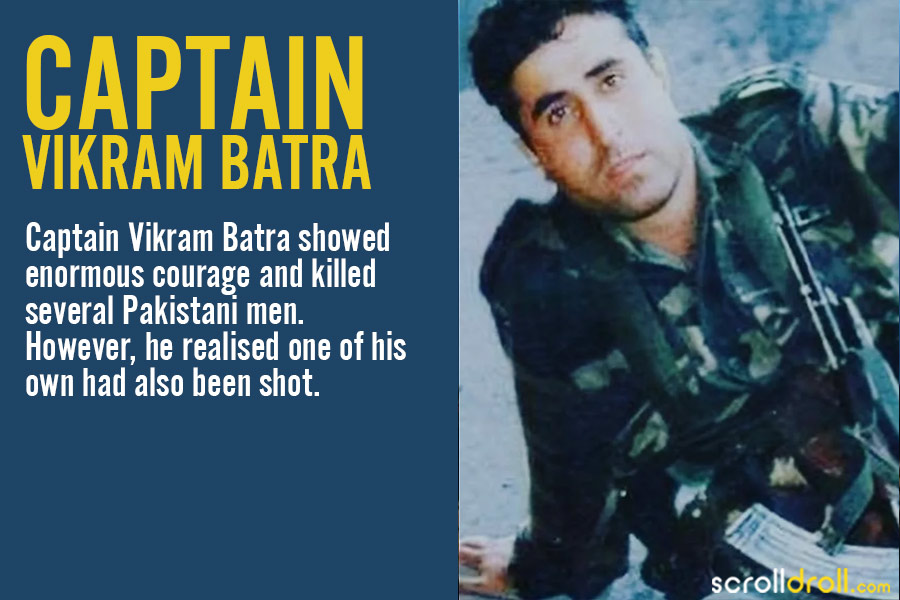 On seeing his man injured, Batra immediately proceeded to help. When one of his other men, Sub. Ragunath Singh offered to help him, Batra refused, saying, “You have a family and children to go back to. I’m not even married.” Batra exposed himself to enemy fire as he tried to save his injured man, and was shot in the chest by an enemy sniper. He collapsed and succumbed to his wounds. 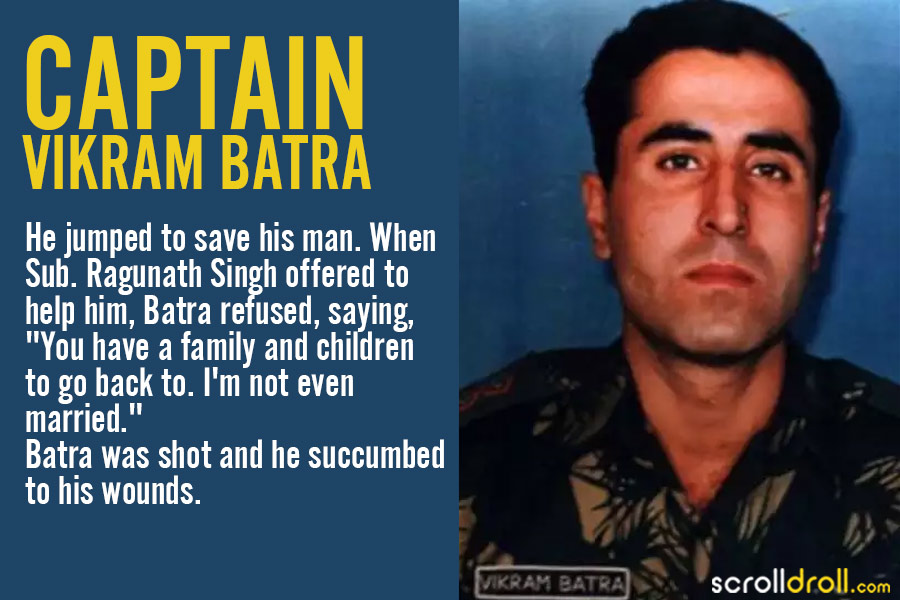 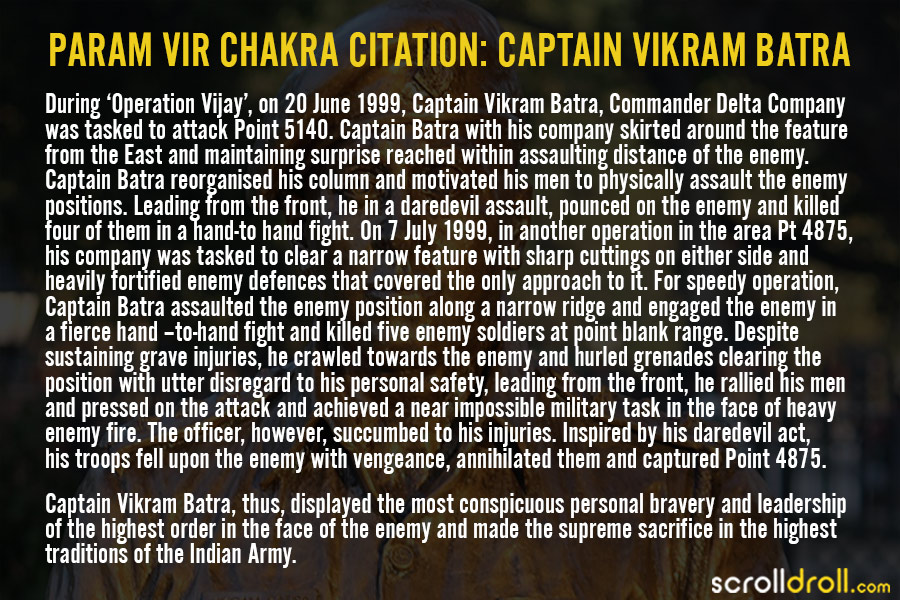 In a matter of a few months, Captain Vikram Batra had become a national hero. But in the true sense of heroism, he was a hero ever since he decided to join the army; he was a hero as soon as he decided to help his motherland. He showed unimaginable bravery with great risk to his life, and eventually died a hero’s death – while trying to save the life of his man. The nation must remember men like Captain Vikram Batra for years to come.

16 Hilarious Family Man Season 2 Meme Templates That You Must Use!