A Heavenly Trek To Deoria Tal In Uttarakhand

I had heard about the beautiful landscapes and picturesque Himalayan valleys in the Rudraprayag district of Uttarakhand. Also called ‘Dev Bhoomi’, the mountains in Uttarakhand nestle some of the most revered shrines in the most picturesque landscapes. One such place in Uttarakhand with several mythological legends and stories is the Deoria Tal.

Deoria Tal is a high altitude lake perched at an altitude of 2348 metres. It is located in the Rudraprayag district of Uttarakhand. Sari Village, located around 420 km from Delhi and 55 km from Rudraprayag city serves as the base camp of this trek. The total trek distance from Sari Village to Deoria Tal is 2.3 km.

I visited Deoria Tal recently during my Unseen Uttarakhand trip with three other friends. This place was not in our plans initially and we had moved to Chopta – the base of the Tungnath and Chandrashila trek where one of my friends who had been to Deoria Tal earlier suggested we also visit this place.

Sari Village is around 20 km away from Chopta towards Rudraprayag. We were welcomed by beautiful views of the blue skies, step farms on the mountains and lush green landscape as we approached Sari. We were carrying a Panasonic Lumix G85 to click the landscapes here. Being a compact camera that easily fitted in our bags, it was a good change from the bulky DSLRs I used to carry in my earlier trips. 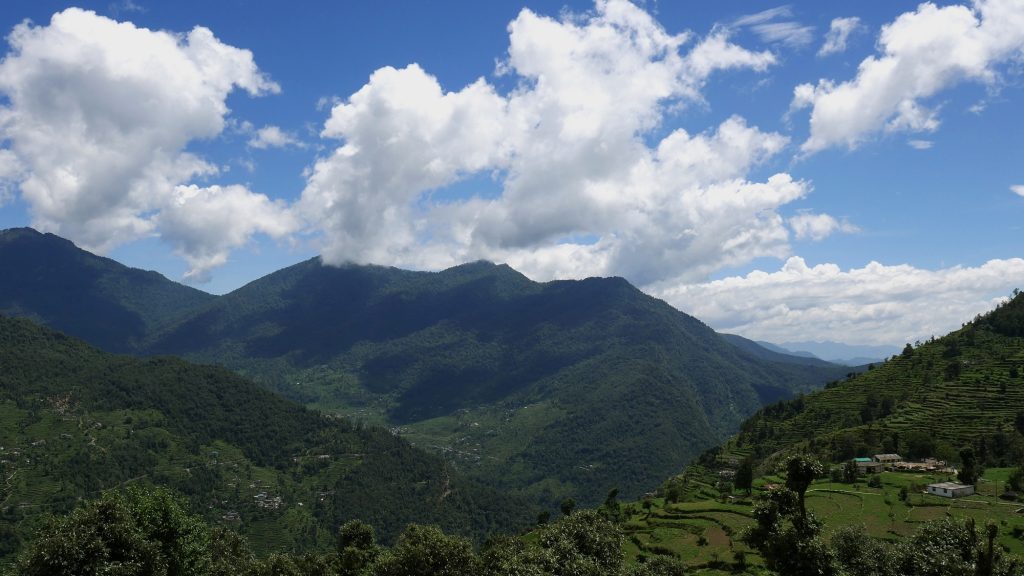 The trek that starts from the Sari Village, takes you through dense forests. The entire trek route is paved with stones thus making sure that you can go ahead for this trek and complete it without a guide. As you go up higher, the forests get denser. The trek is easy and has a gradual ascent, it offers spectacular views of the neighboring mountain ranges. We turned on the Intelligent Auto mode of the Lumix to capture the photos here. 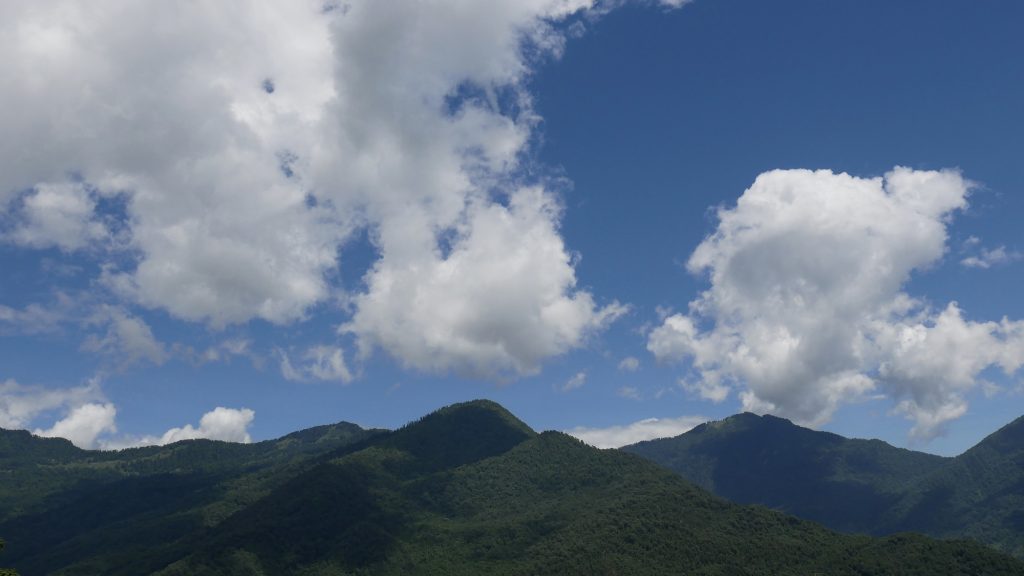 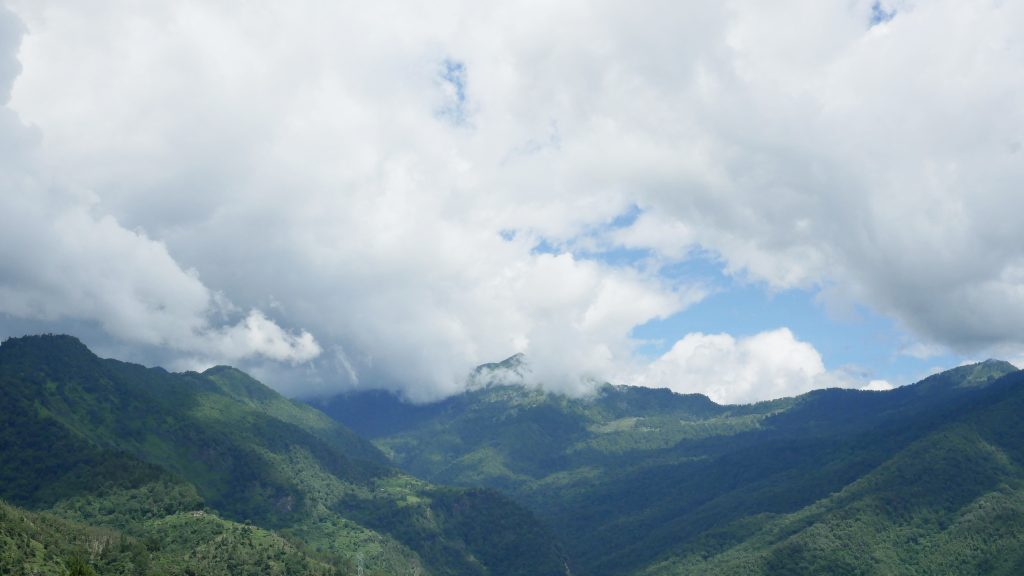 The 2.3 hours trek took us close to 1.5 hours to complete and we arrived at Deoria Tal. 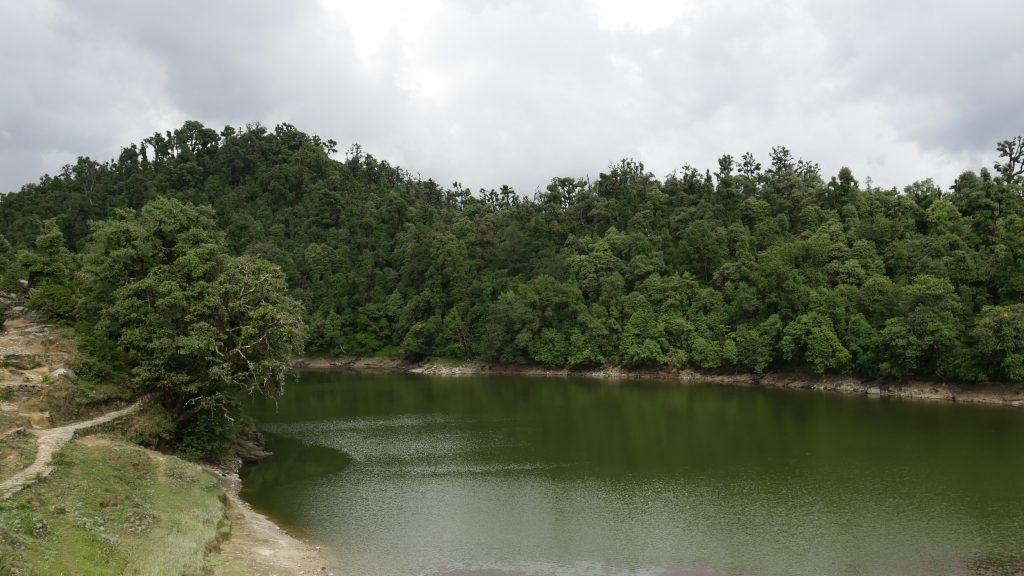 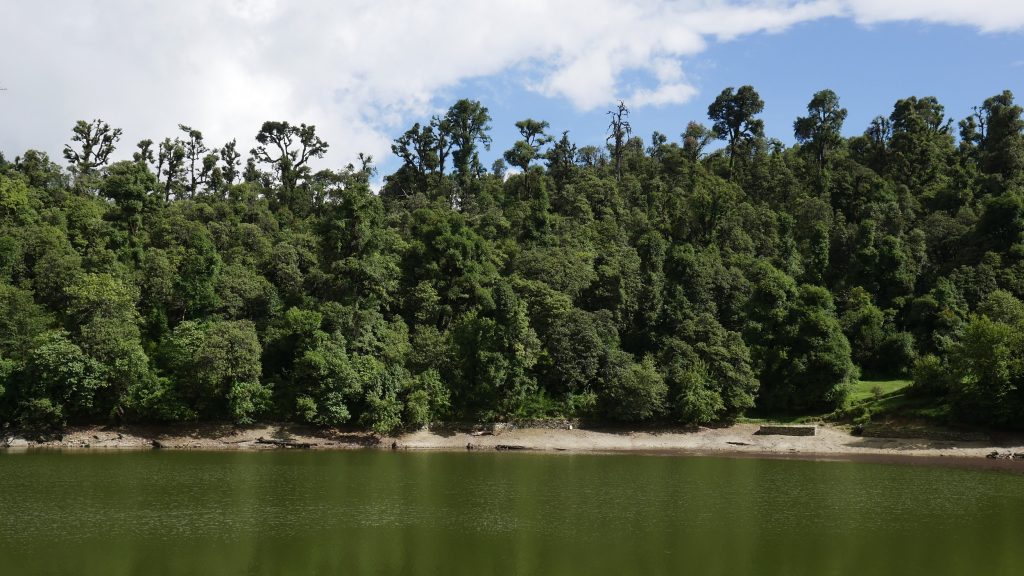 It is believed that the Gods (Devas) used to bathe in this lake and hence the name Deoria Tal. This lake is also believed to be the place where Yaksha (a nature spirit) asked Pandavas to answer his questions before trying to drink water from this lake. Yudhishthira, the eldest Pandava was the only one who could answer the questions and saved the lives of his brothers.

The landscape around the lake is lush green with sprawling meadows, rich in flora and fauna. It is the perfect place to relax and rest on the green grass after the trek. 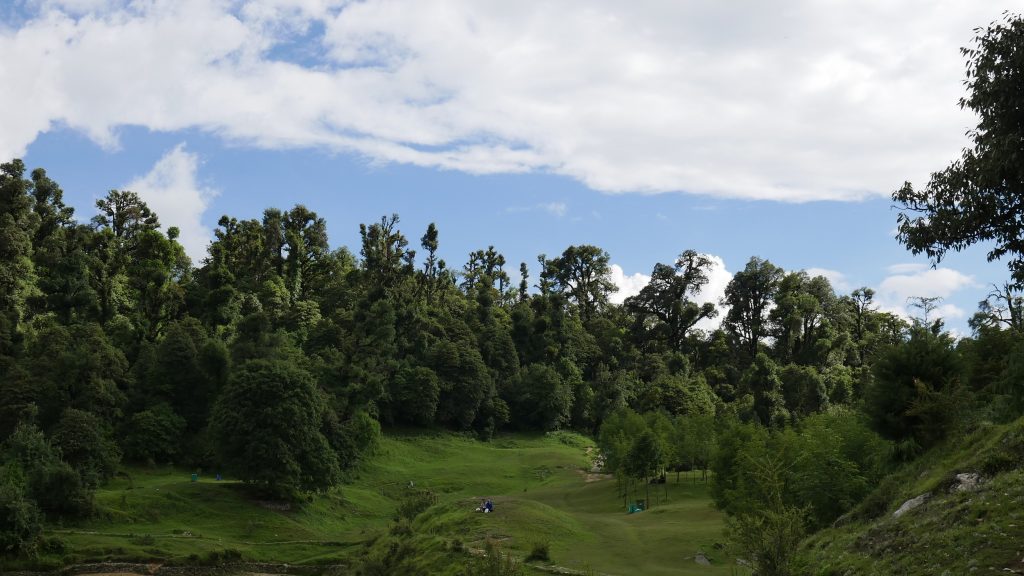 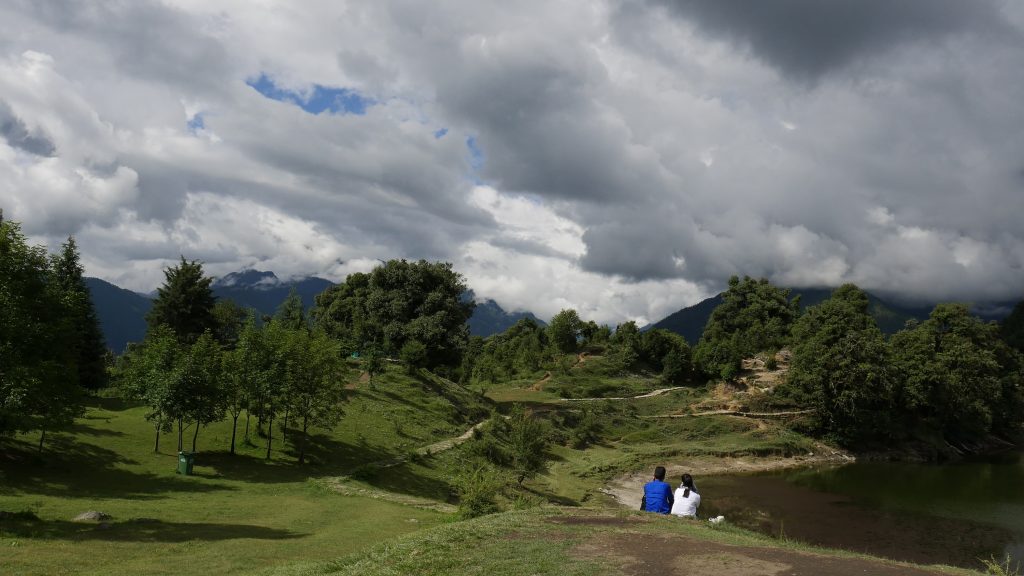 We then spent some time to capture a time lapse of the scenery around the Deoria Tal lake. After moving round the perimeter of this lake, we found a perfect place to position the Lumix with a view of the clear blue sky. In around 20-25 mins, the time lapse was finally created.

On a clear day, one can see the views of high altitude snow-capped Himalayan peaks from this lake. The reflection of these peaks in the waters of Deoria Tal makes it the perfect setting for great photographs. We were unlucky to find that the weather was not in our favour. Though the Himalayan peaks were covered in a blanket of clouds, we did shoot the reflections of the clear blue sky on the Deoria Tal waters here.

It was some hard-work going around the lake to find the perfect spot where the reflections of the sky was appearing clearly in the water. We then switched to the manual mode of the Lumix85 and increased the depth of field to capture the reflections. 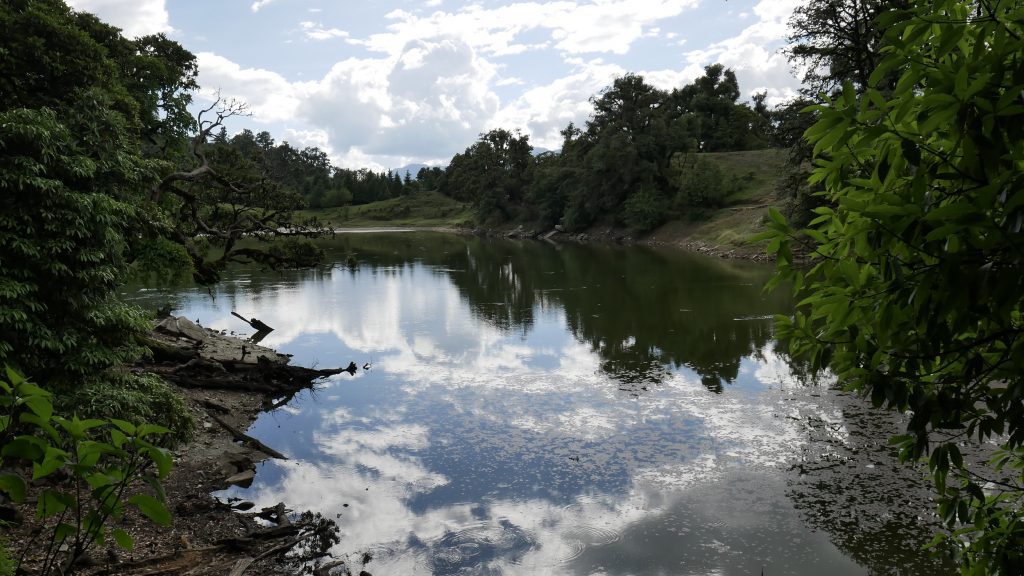 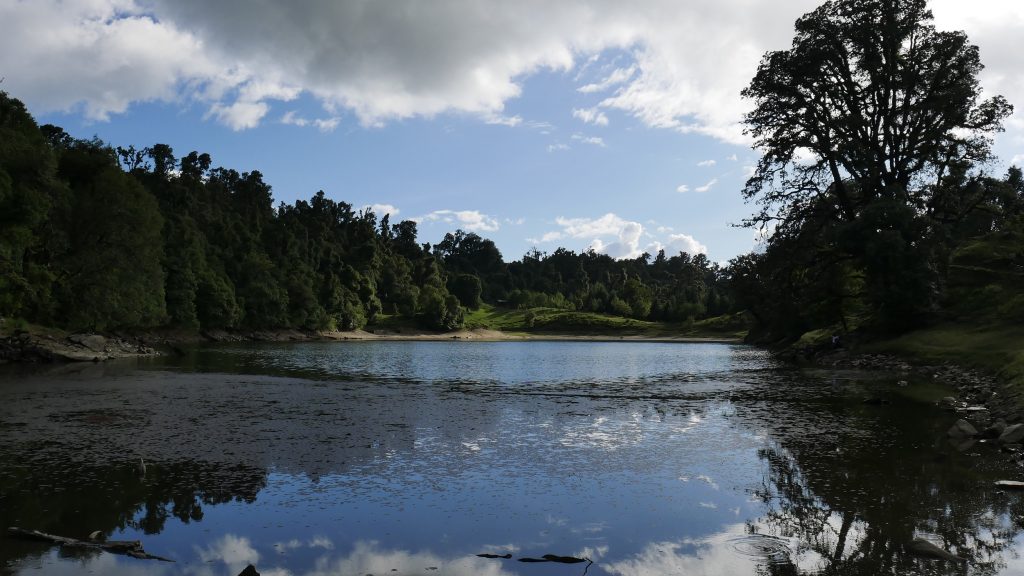 It was soon turning dark and though there were camping options here, we preferred to descend down and get back to Sari village. The descend here was a cake-walk and was complete in barely 45 minutes.We were happy to have completed the trek easily and had some good shots from our Lumix.

This tranquil lake reeks of natural spirituality and the cool breeze takes away all the fatigue that you might have gathered on the hike up-hill. It is a picture-perfect spot and a haven for nature and wildlife photographers. Deoria Tal is relatively less crowded compared to the other destinations in Uttarakhand and you should definitely pay the Lake of the Gods a visit soon.