Narcos is a Netflix series that chronicles the rise of the cocaine industry in Colombia during the 80s and discusses real-life drug-lords and the police’s attempts to thwart them. The show in its first two seasons primarily focuses on Pablo Escobar, who became a billionaire from trading drugs. The series has received generally favourable reviews from critics and audiences. The show has been praised for its depiction of Escobar as a character that draws the viewer’s sympathy. Here are 25 dialogues from Narcos that make it a gripping tale of power and corruption.

Now, onto these 25 best dialogues from Narcos by its various characters:

In the United States, the Mafia makes witnesses disappear so they can’t testify in court. In Colombia, Pablo Escobar made the whole court disappear. 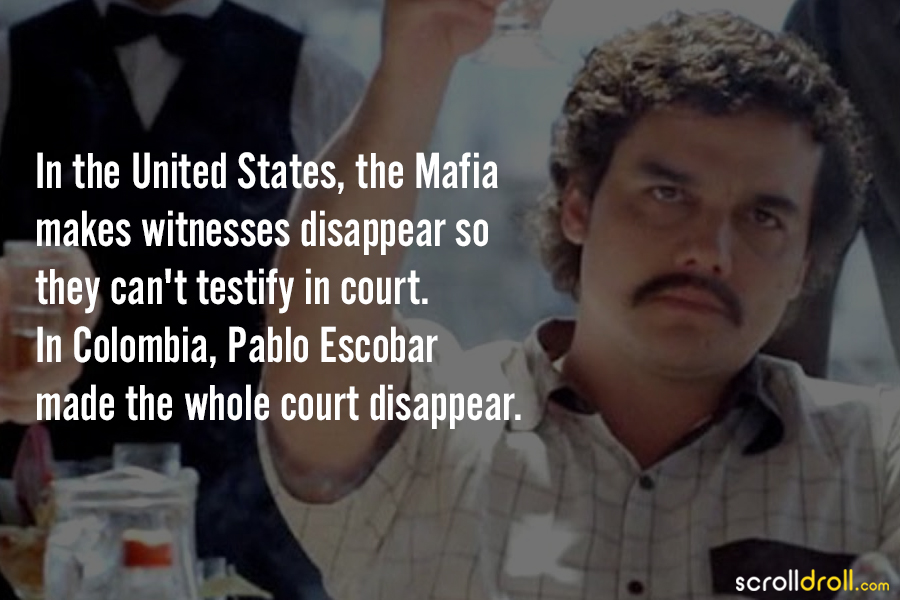 2. Always be ready with an Option B.

Despite his threats, many brave men defied him. And, true to form, when the pen failed … Pablo was always ready with the sword. 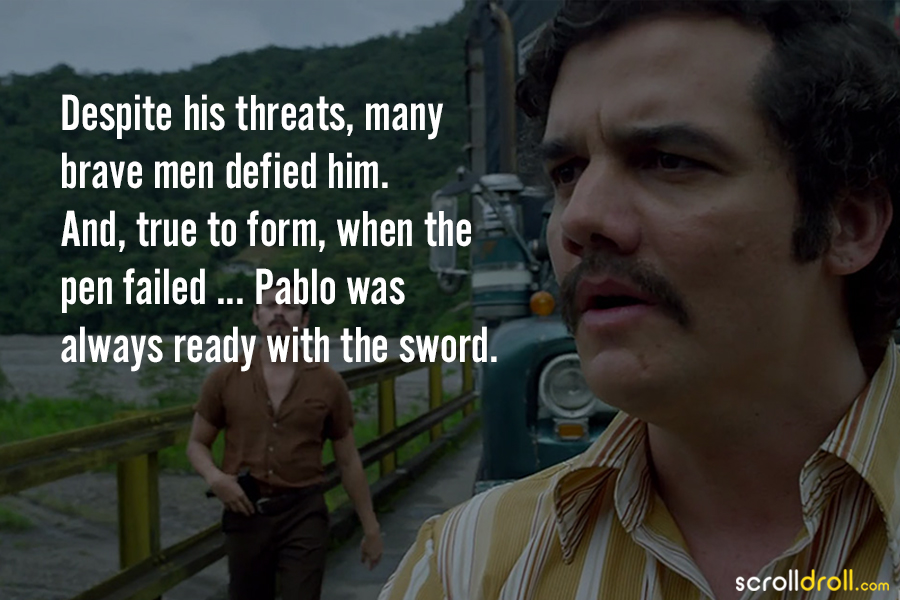 3. When they don’t understand you, they call you stupid.

Geniuses are always branded as crazy. 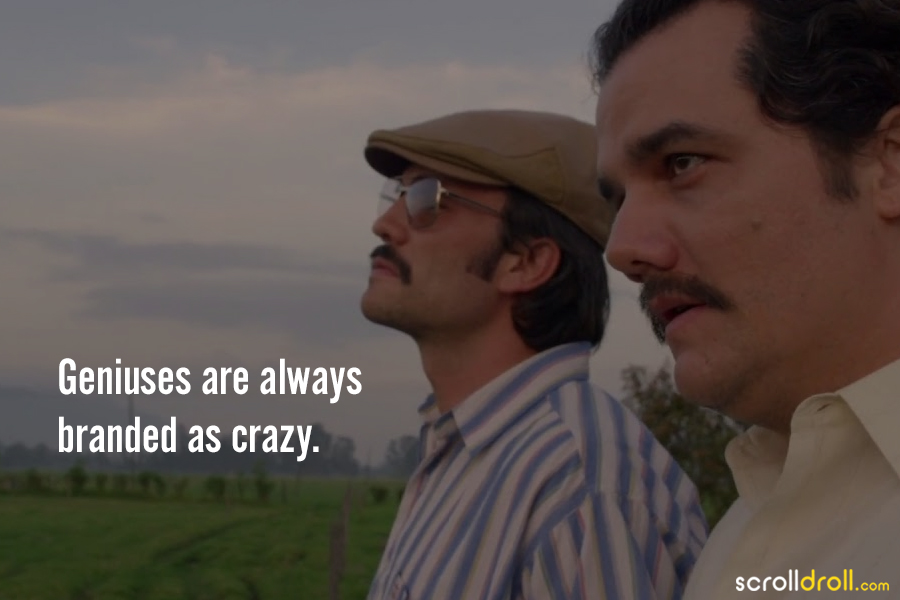 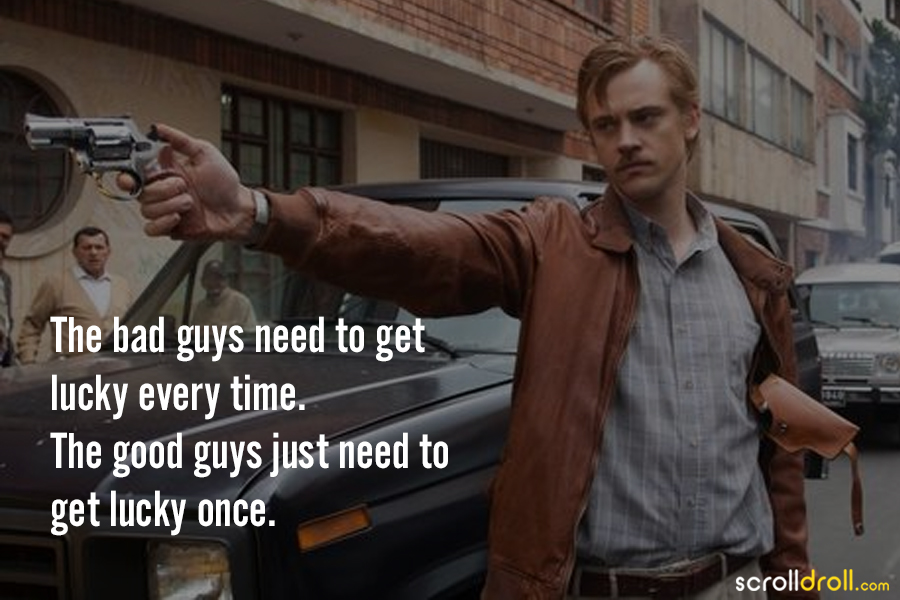 5. Some changes are too permanent.

As the twig is bent, so grows the tree. 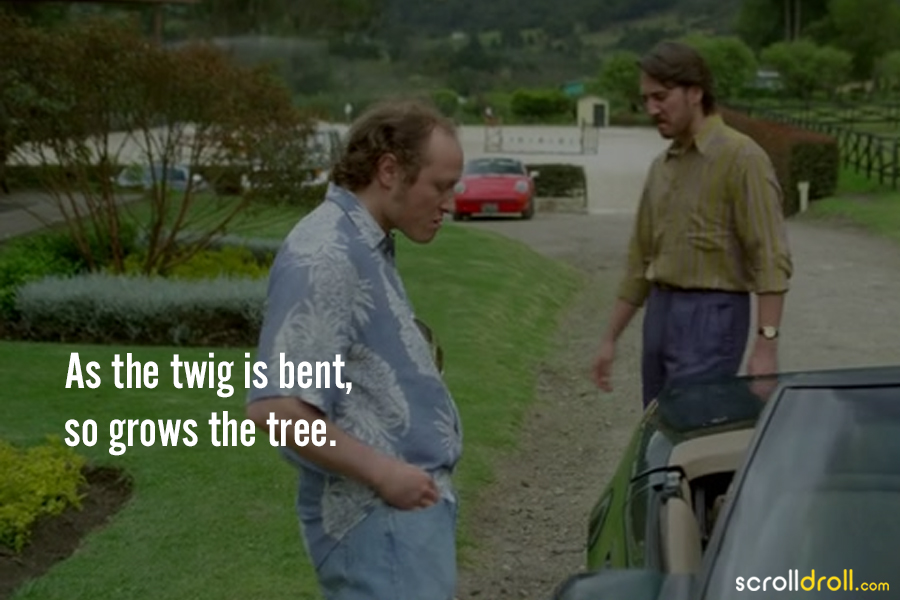 6. What would you do if you had so much money you couldn’t count it?

Imagine you were born in a poor family, in a poor city, in a poor country, and by the time you were 28 years old, you have so much money you can’t even count it. What do you do? You make your dreams come true. 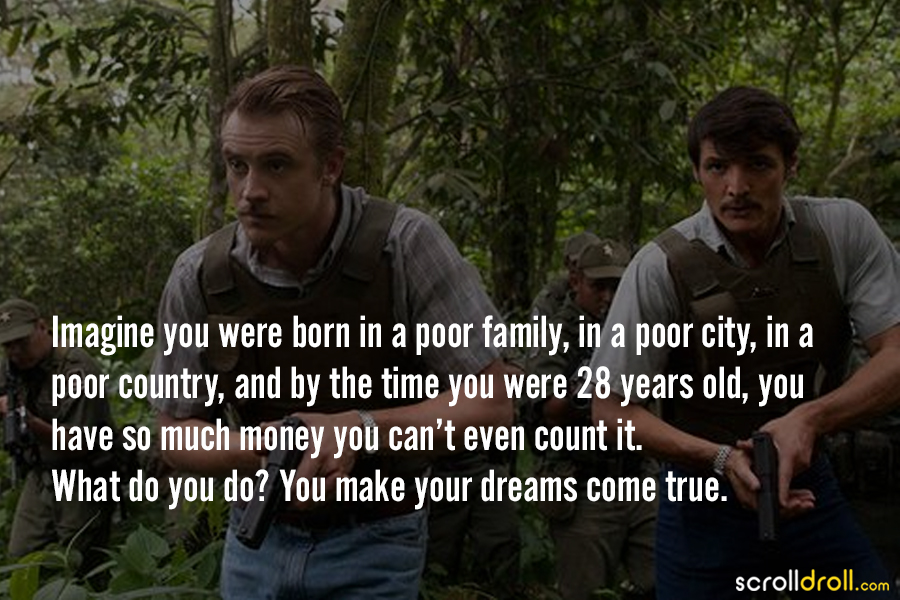 7. Sometimes you save someone with a lie.

“Lies are necessary when the truth is too difficult to believe.” 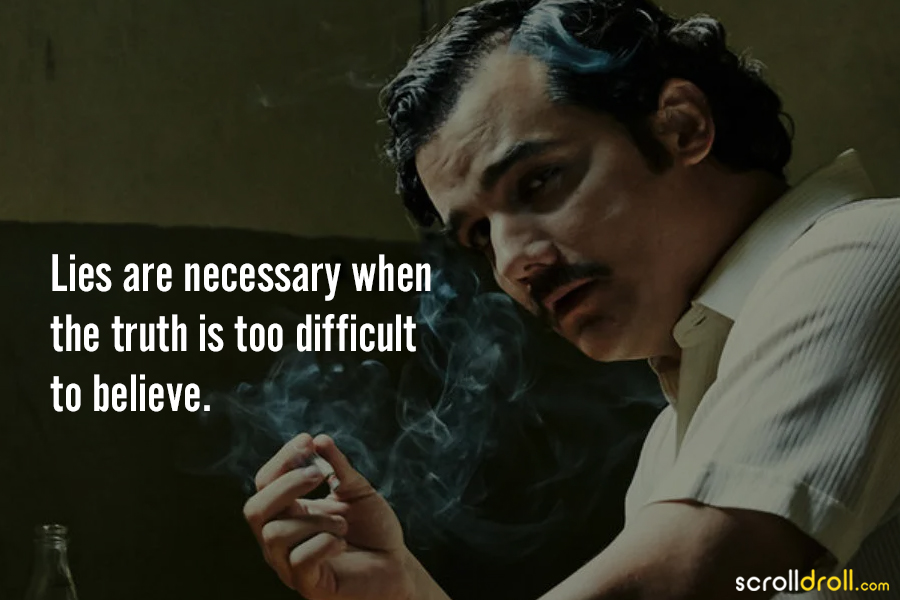 8. Accept my deal, or accept the consequences.

I am Pablo Emilio Escobar Gaviria. My eyes are everywhere. That means you guys can’t move a finger in all of Antioquia without me knowing about it. Do you understand? Not a finger. One day, I’m going to be president of the Republic of Colombia. So look, I make deals for a living. Now, you can stay calm and accept my deal, or accept the consequences.” 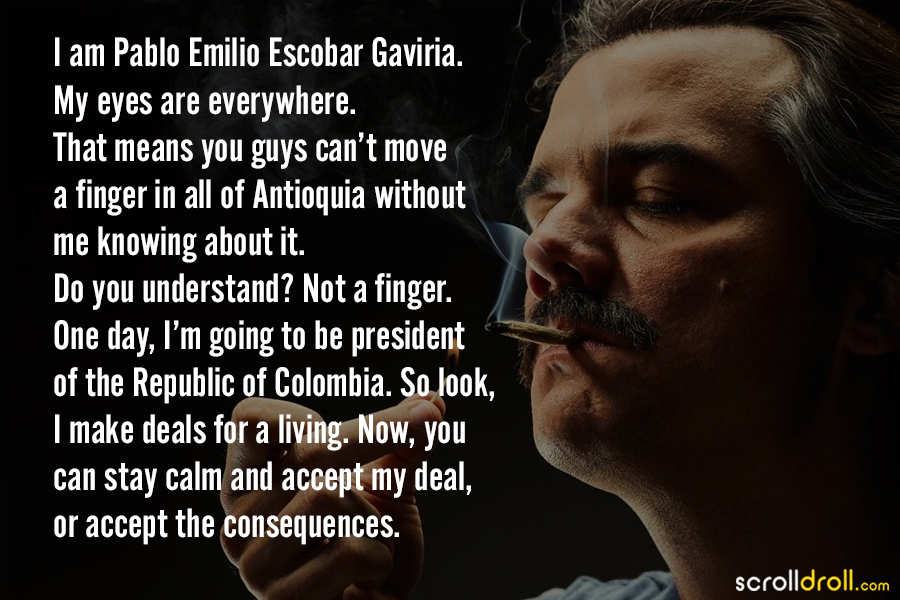 9. Why be good when you can be great?

I don’t want to be good. I am going to be great. 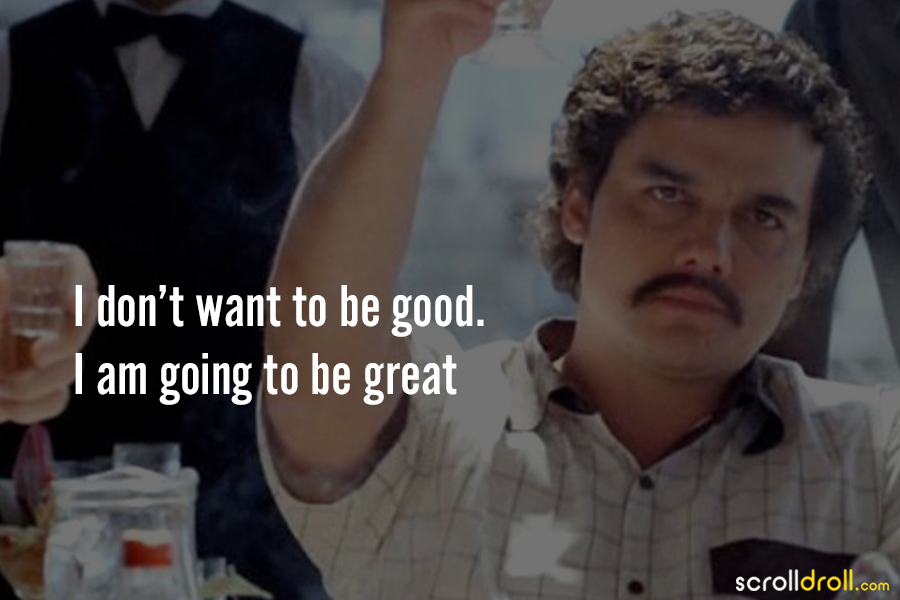 10. There are no shortcuts.

If you support evil, you are evil. 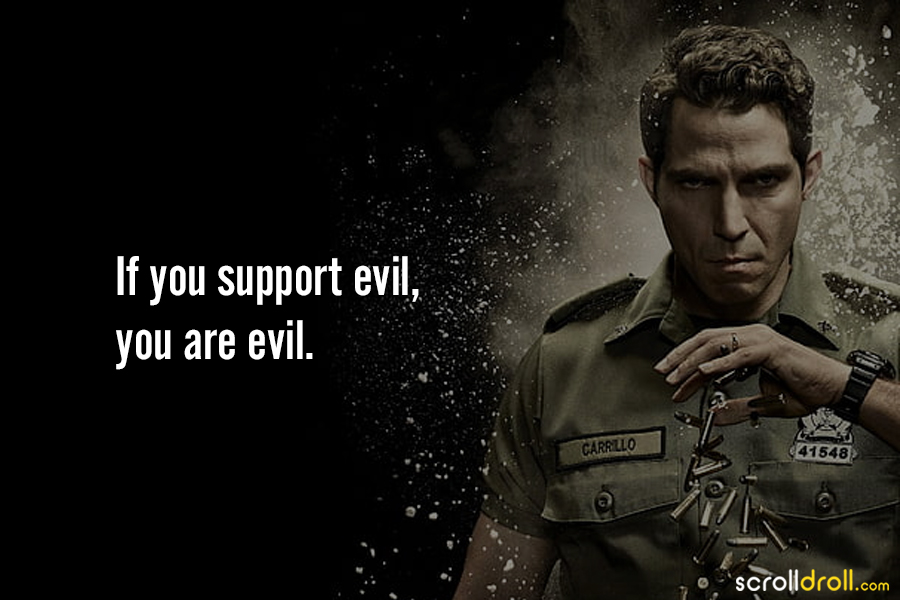 The purpose of war is peace. 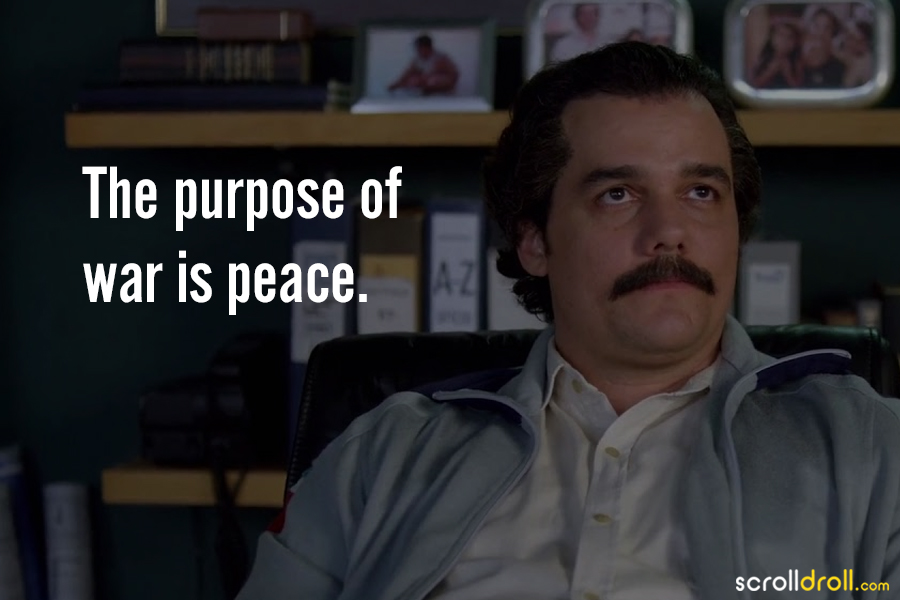 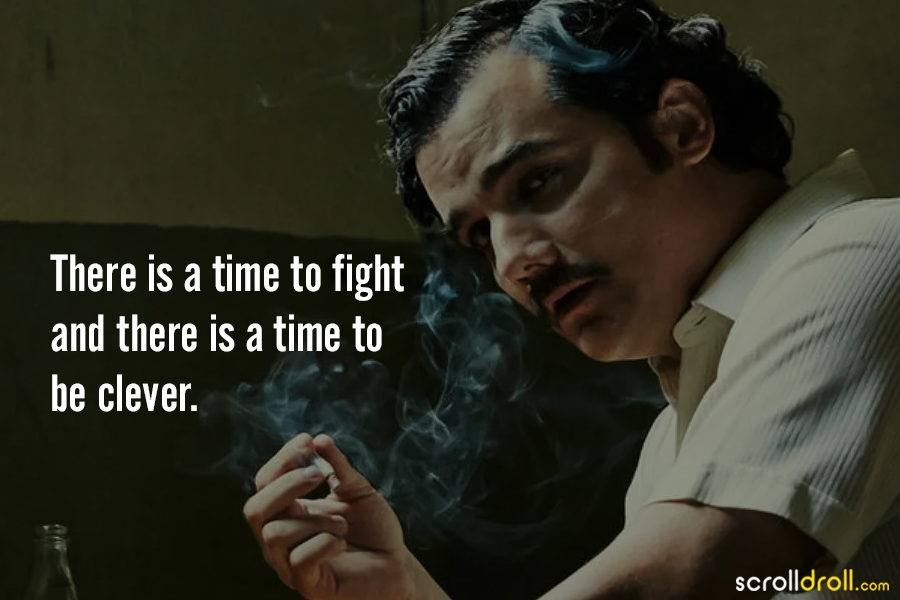 All due respect, Ambassador, but you know where we are. With enough money, you can get anything done. 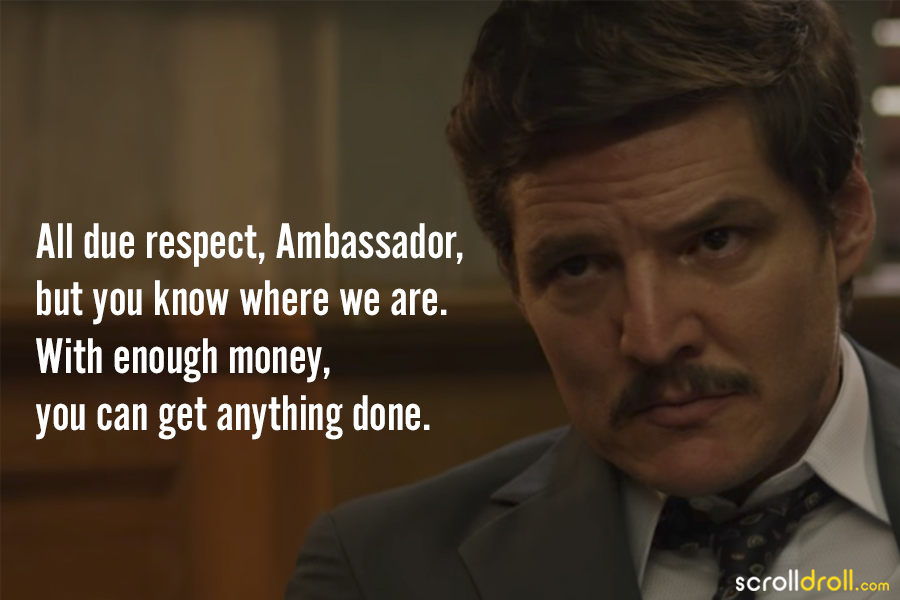 14. Sometimes, to defeat the enemy, you must emulate them.

Sometimes you gotta do bad things to catch bad people. 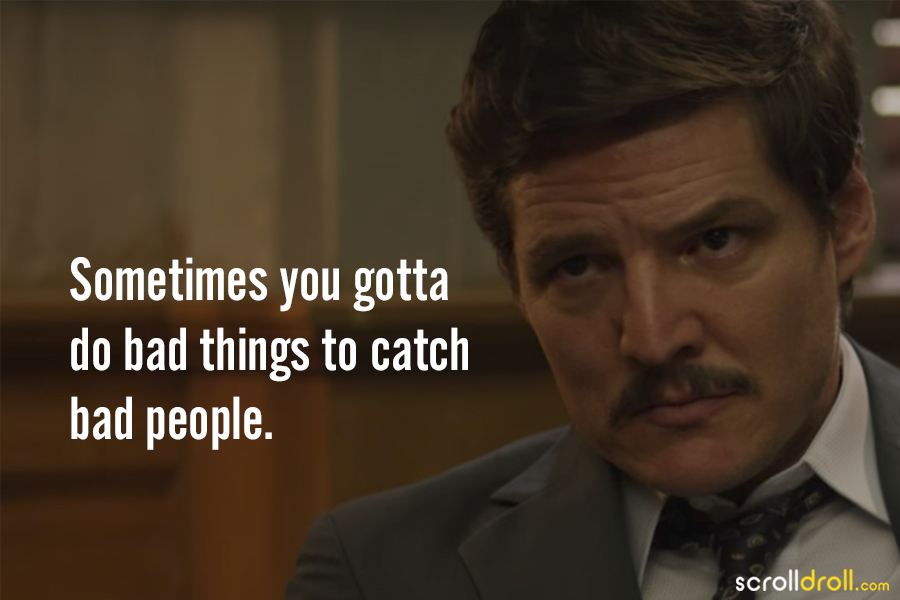 15. What’s the point of being powerful if nobody knows you’re powerful.

What good is being the king if nobody knows it? 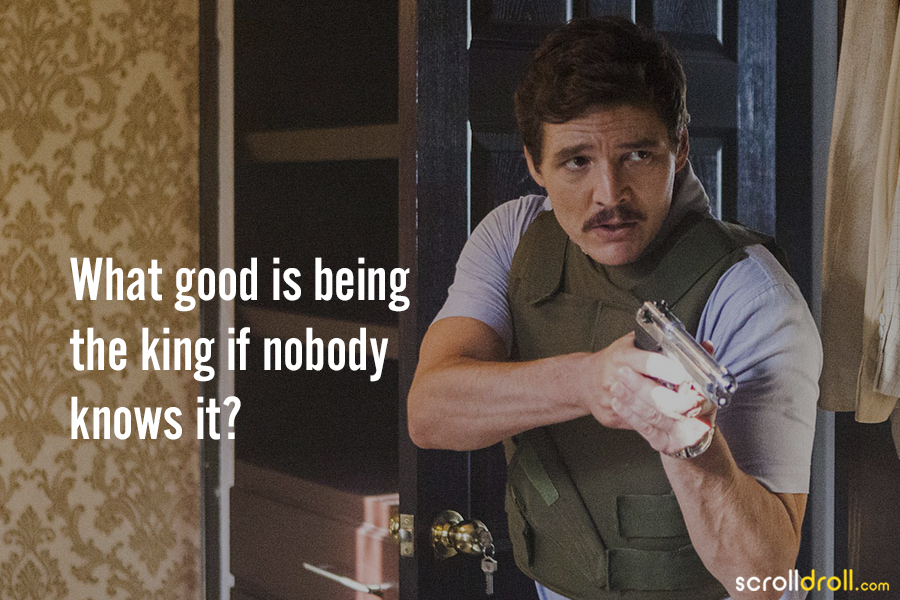 War makes for strange alliances, putting you into business with people that, under other circumstances, you wouldn’t even shake hands with. 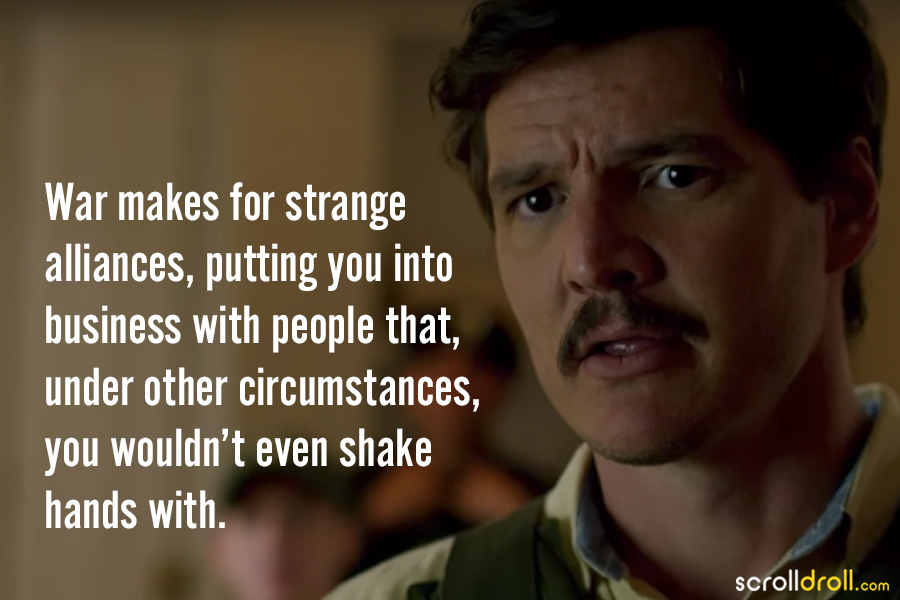 17. Cocaine blurs the line between a human and a rodent.

Cocaine hijacks the pleasure centers in the brain. A rat will choose cocaine over food and water. It would choose cocaine over sleep, over sex, over life itself. The human brain isn’t quite the same as a rodent’s, unless we’re talking about cocaine. 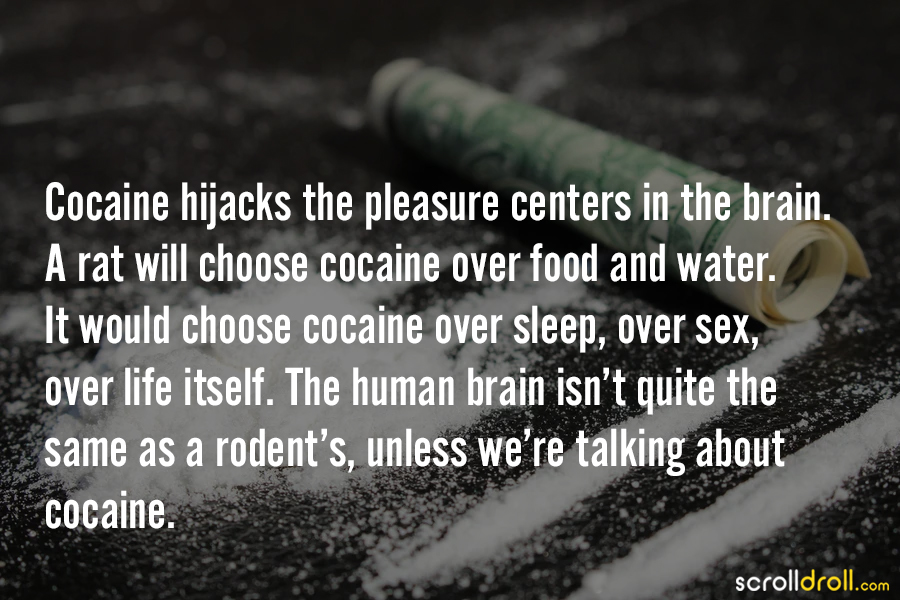 When you get too close to the sun, your dreams may melt away.

19. No matter how you decorate a cage, a cage is still a cage. 20. Charity is basically giving back what you had stolen.

When you’ve run out of ways to hide your money, that’s when you give it to the poor. 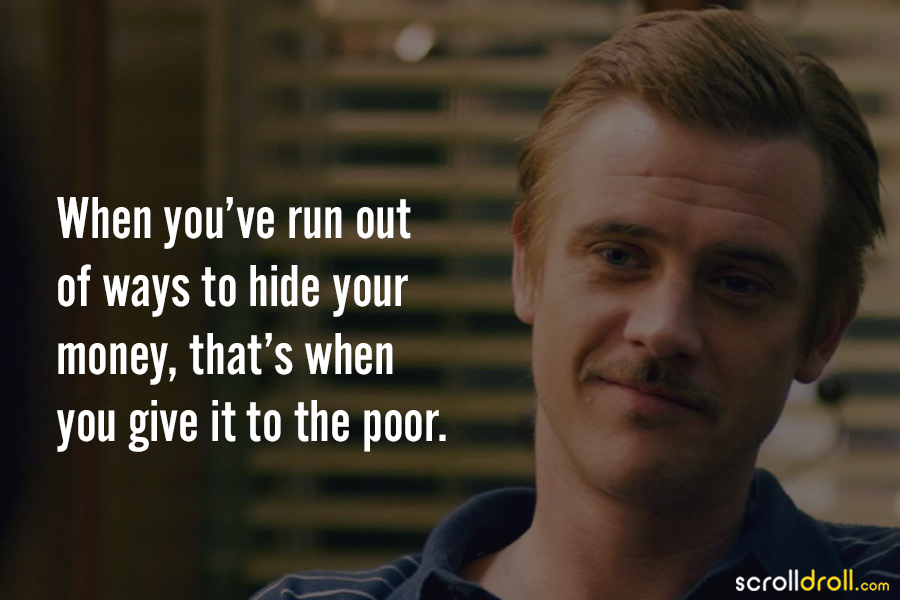 One man’s prison is anyone else’s palace. 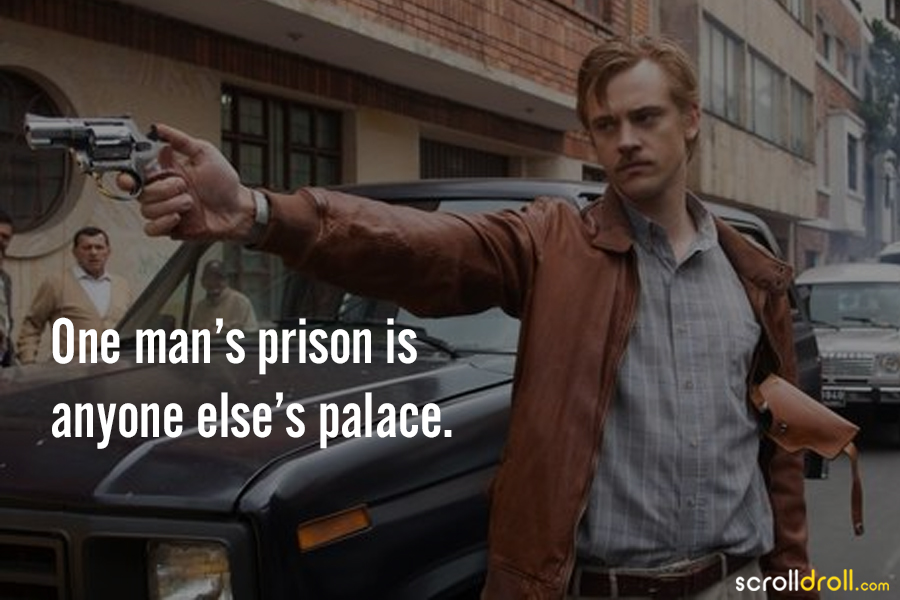 22. Marketing is all that matters.

Best way to make a bad story go away is to come up with a better story, and sell it hard. 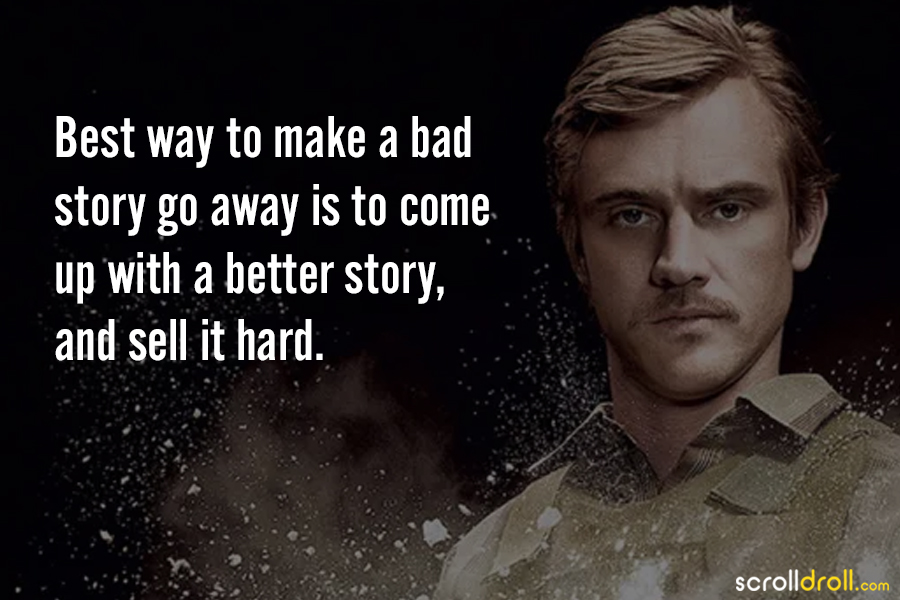 Brave men have a way of dying quickly. 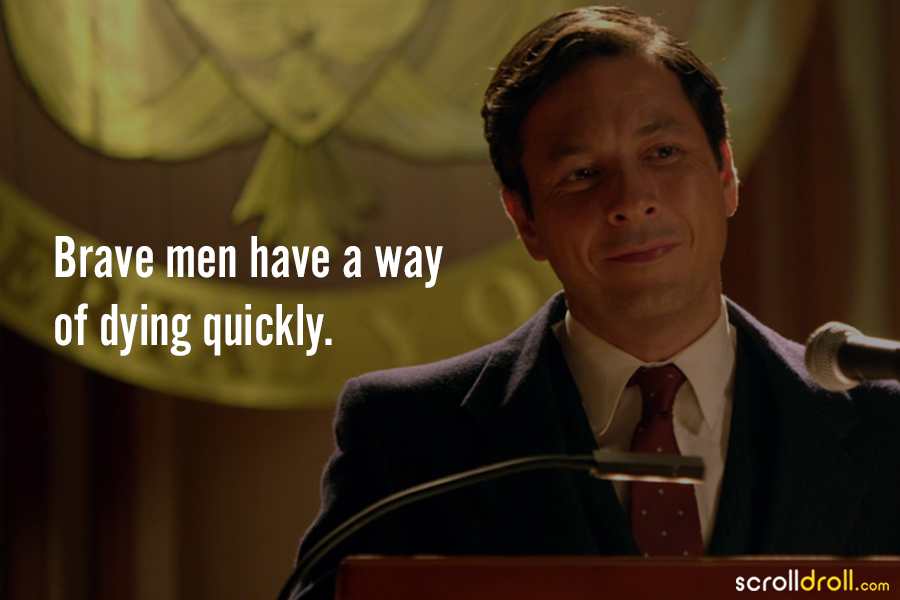 24. Do not let others walk all over you.

If you don’t play, you’re going to watch others score. 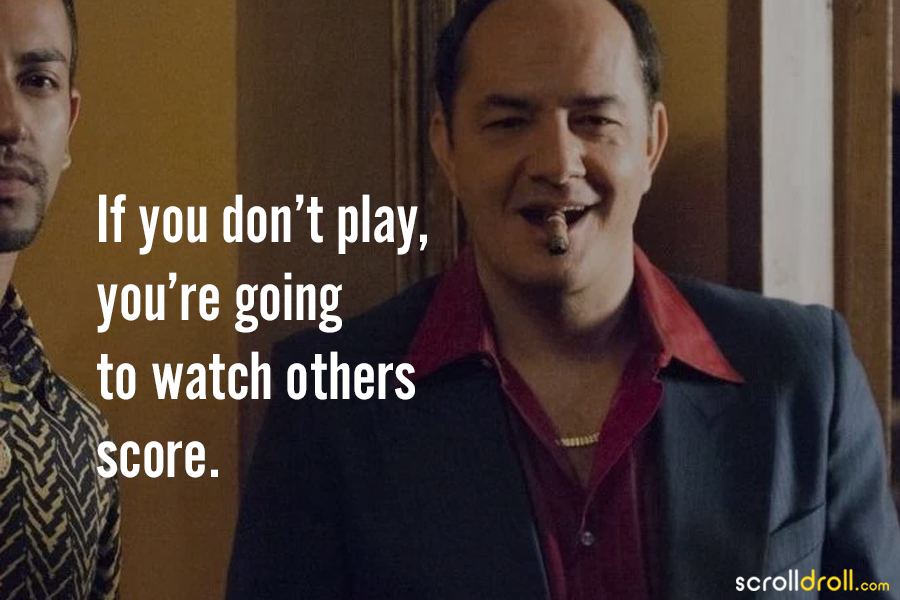 Colombians say, God made our land so beautiful it was unfair to the rest of the world. So to even the score, God populated the land with a race of evil men. 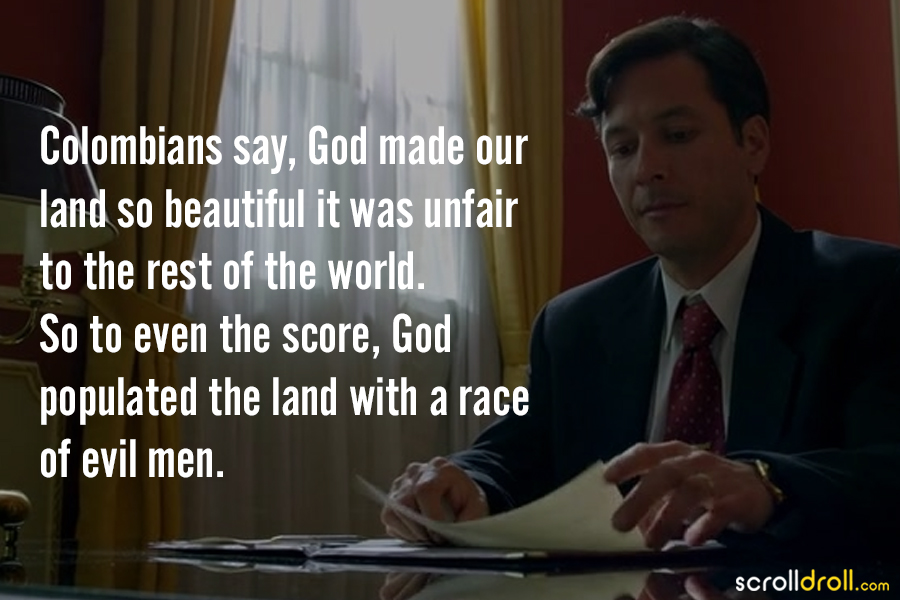 Did you like these dialogues from Narcos? Which is your favourite dialogue from the series? Comment below to let us know!