30 Dialogues From WandaVision That Make it An Absolute Treat!

While in 2020 Marvel postponed the release of movies like Black Widow and the third instalment of Spiderman that fans were waiting for with bated breath, in 2021, Marvel released WandaVision, the first Marvel series that is set in the MCU that shares continuity with the movies. To say that Marvel probably did not anticipate the amount of love this show will receive would be an understatement. Within weeks of its release, WandaVision became the most watched web series on a streaming platform in the month of January, and the weeks leading up to its finale, became a cultural phenomenon of sorts – with fans scratching their heads to figure out what was going on. After having such a great reception, it goes without saying that many of the dialogues from WandaVision are still fresh in the viewer’s minds, especially because of the abundance of memes that they created.

WandaVision follows the story of Wanda and Vision, seemingly happy living a blissful married life, even though much of what’s happening around them doesn’t make sense – especially due to the fact that Thanos murdered Vision during the Infinty War. As the series progresses, it becomes more and more clear what is exactly going on, and the reveal at the end is both cathartic and sad. While it is unlikely that Marvel will come up with a second season of WandaVision, the makers did suggest that the storyline will find a conclusion in Doctor Strange: The Multiverse of Madness. So until that comes out, we have compiled this list of 30 dialogues from WandaVision that’ll remind you just how great the show was. Also, spoiler alert! If you haven’t watched the show yet, we’d suggest you do not read ahead.

If you haven’t watched the show yet, here’s the trailer to convince you to watch it right away:

Now, onto these dialogues from WandaVision we’ve been talking about:

“My wife and her flying saucers” – Vision

“My husband and his indestructible head.” – Wanda 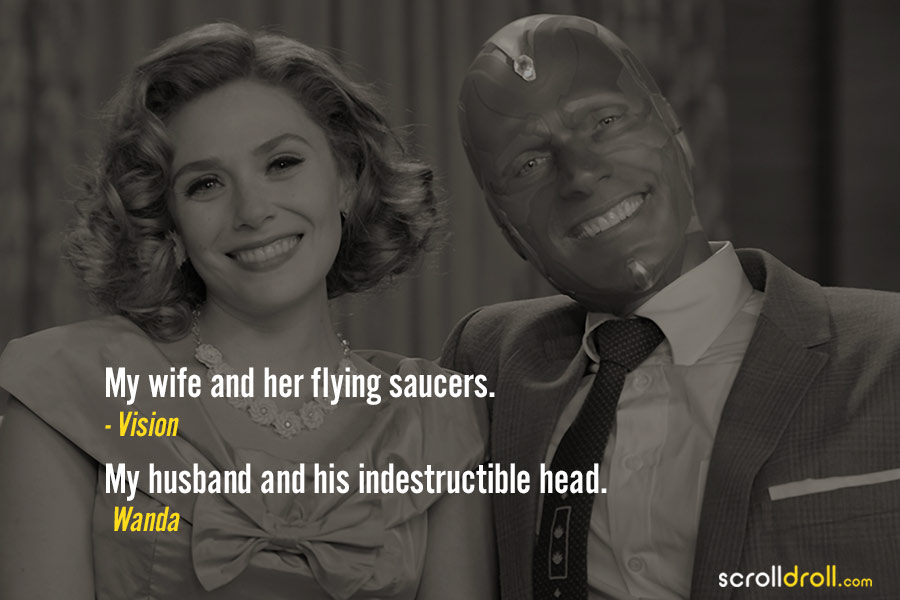 2. What a trip it must be to be a sentient robot. 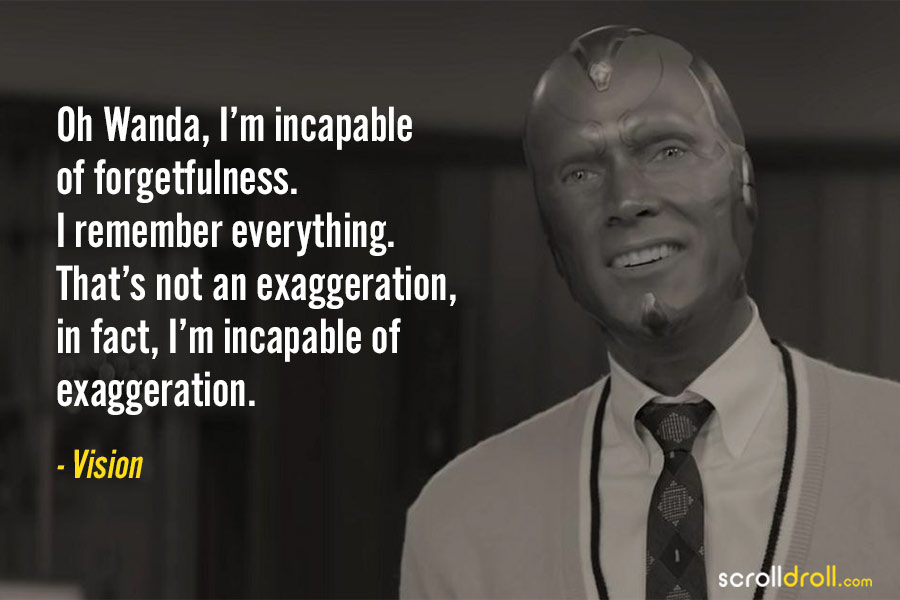 3. Even Agatha Harkness is scared of her mother-in-law.

Forgive me for not stopping by sooner to welcome you to the block. My Mother-in-Law was in town, so I wasn’t. – Agnes 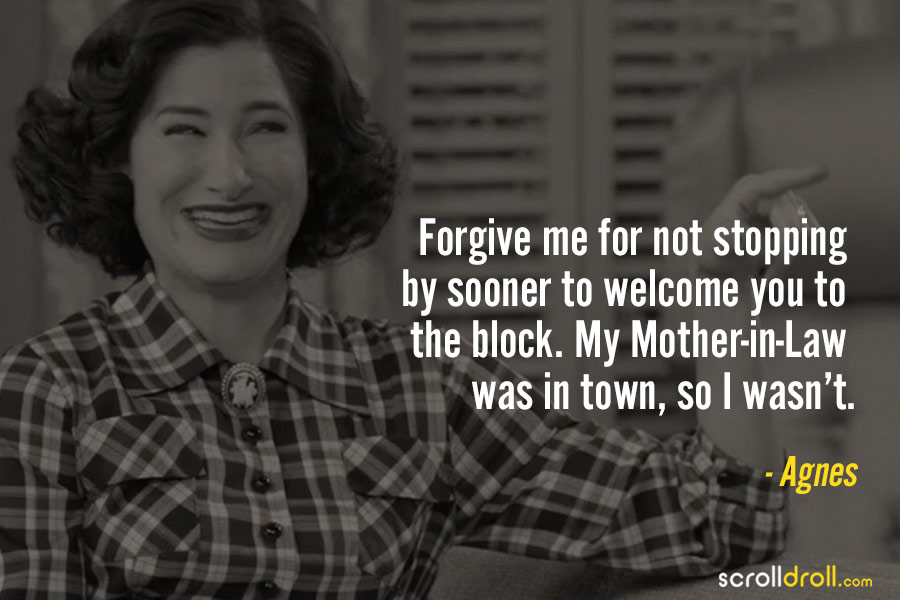 What kind of housewife would I be if I didn’t have a gourmet meal for four just lying about the place. – Agnes 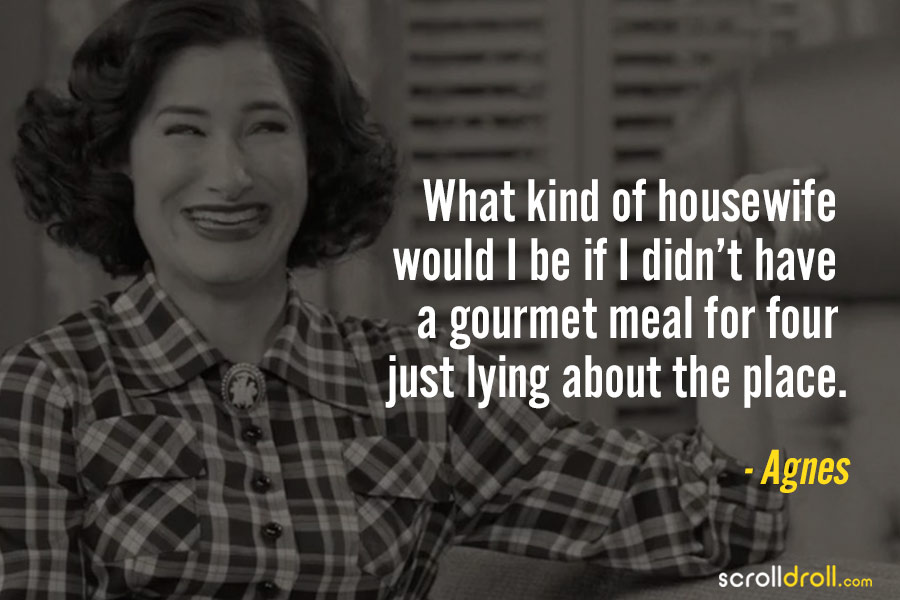 5. Normal things aren’t half as fun as unusual things.

We are an unusual couple you know.” – Wanda

“Oh I don’t think that was ever in question. – Vision 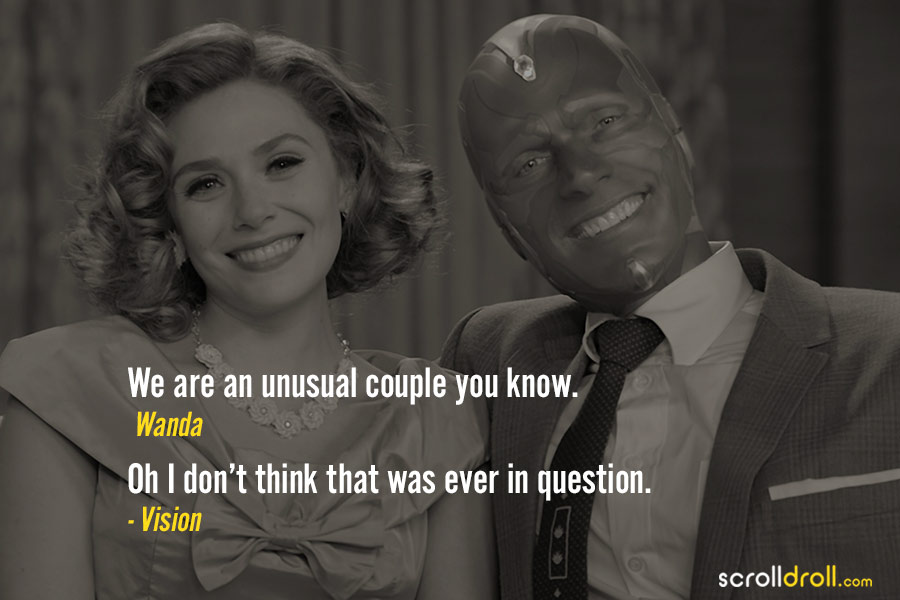 6. Wanda knew even when she didn’t know she knew.

“In a real magic act everything is fake.” – Wanda 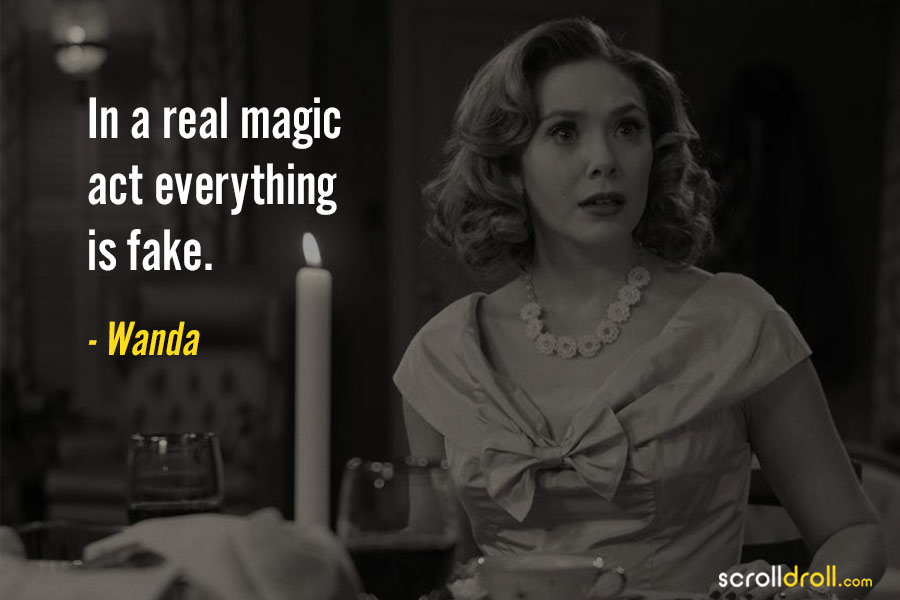 “Well I have nerves of steel so there goes your theory Mr. Doctor.” – Vision 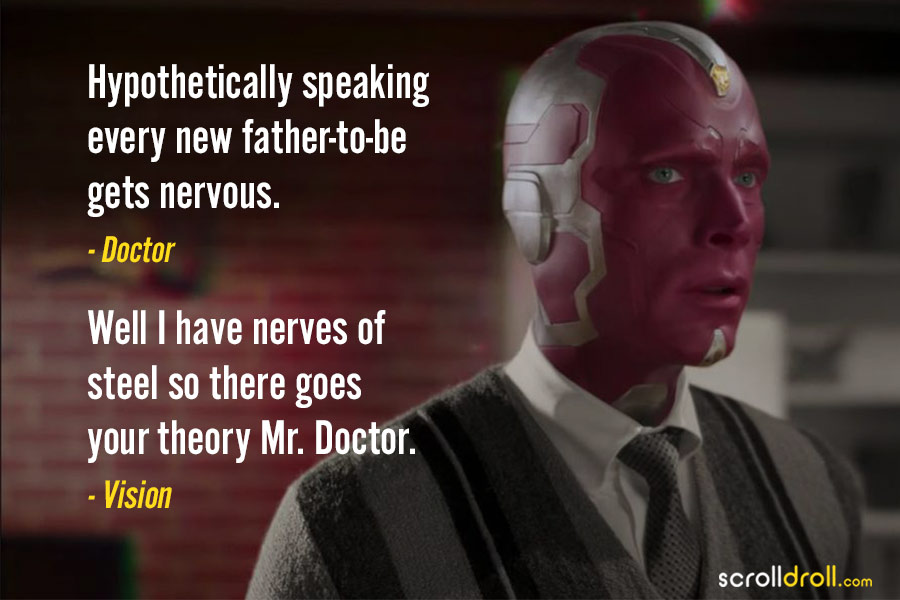 8. Wanda being a confused mess for 9 episodes straight is the best thing about WandaVision. 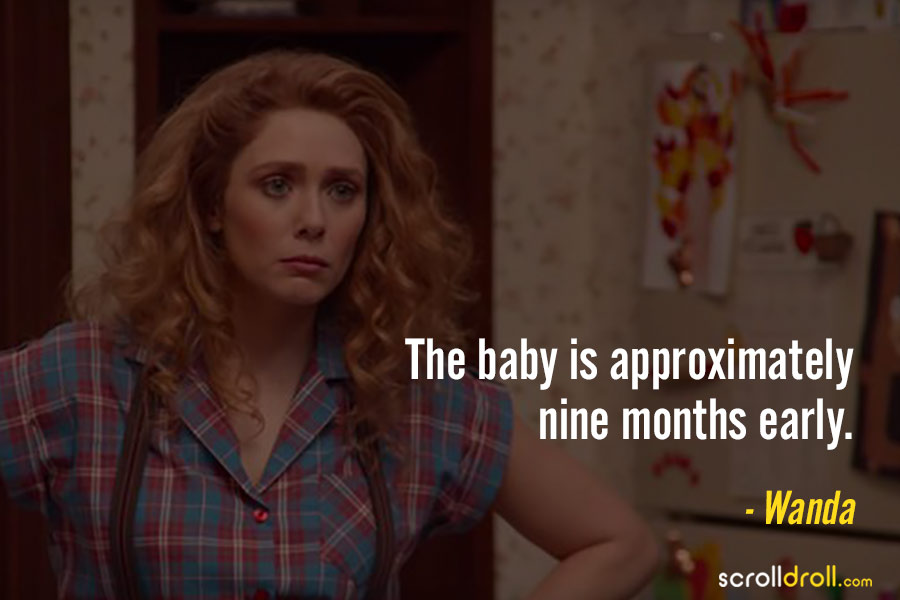 “Small towns, you know. So hard to escape.” – Doctor 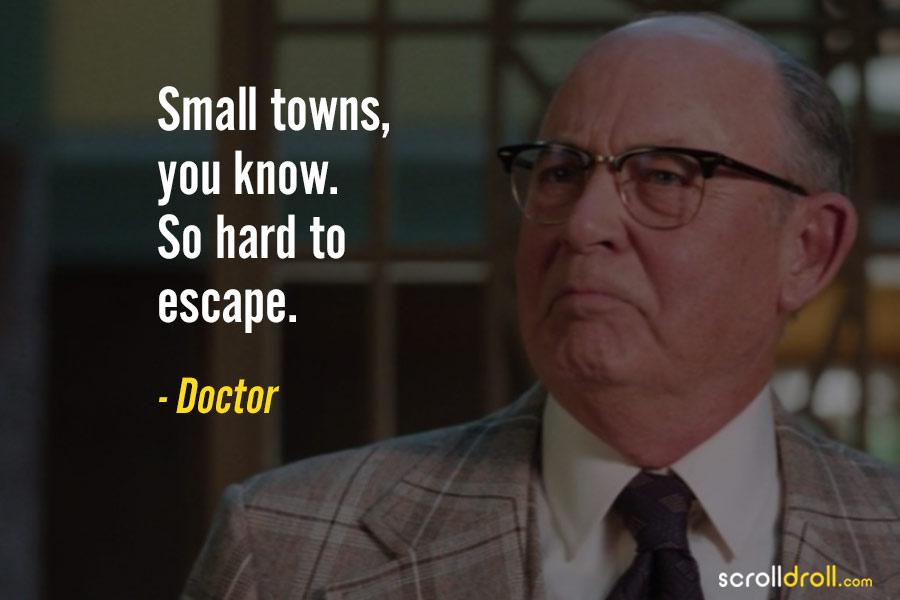 10. A rather bad time to have a slip of tongue.

I was a twin. I had a brother. His name was Pietro.” – Wanda

“He was killed by Ultron, wasn’t he?” – Geraldine 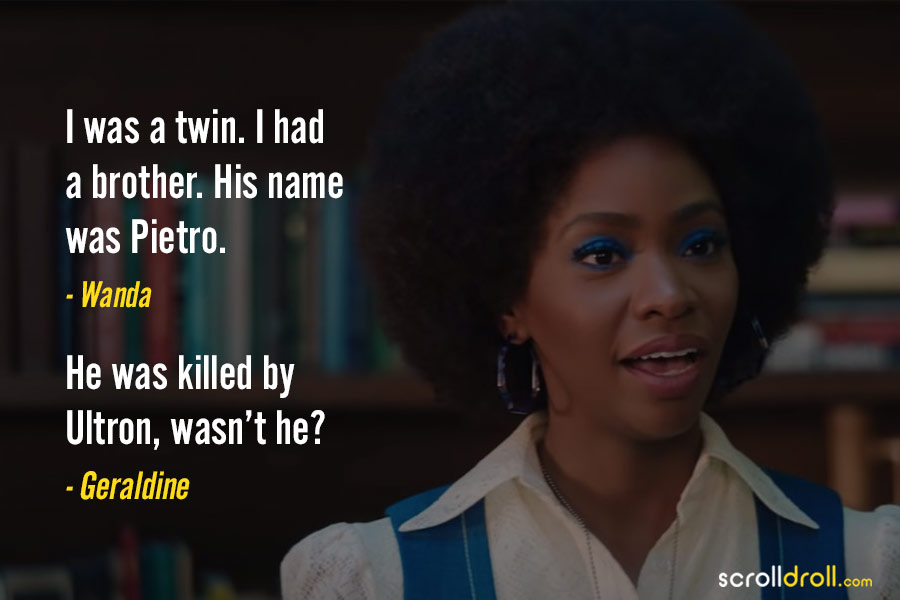 11. Darcy represented the fandom in WandaVision and you can’t change my mind. 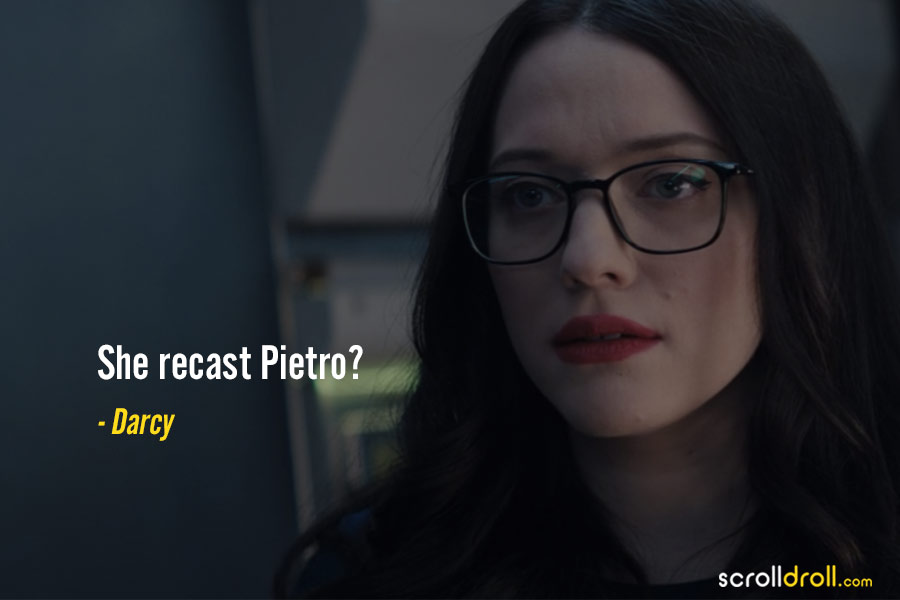 12. Kinda crazy how much Wanda knew even before figuring everything out.

“We don’t have to stay here. We could go wherever we want.” – Vision 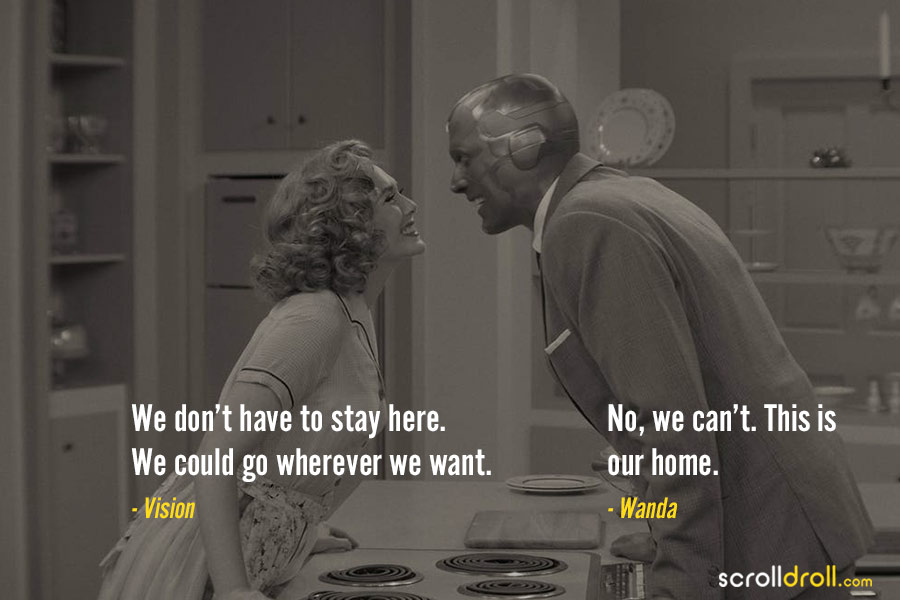 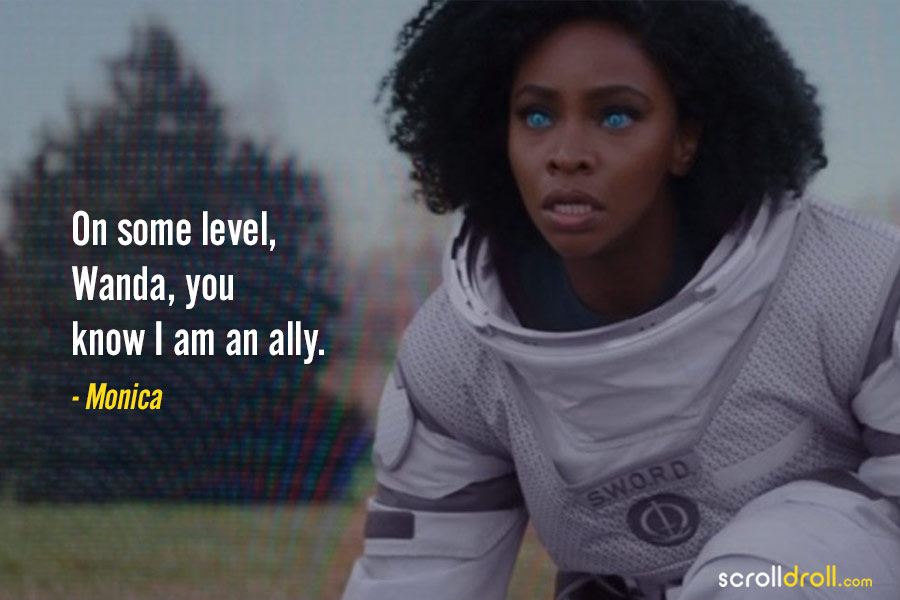 14. Says Wanda, after creating a universe where her dead husband is alive.

“There are rules in life. We can’t rush aging just because it’s convenient. And we can’t reverse death.” – Wanda 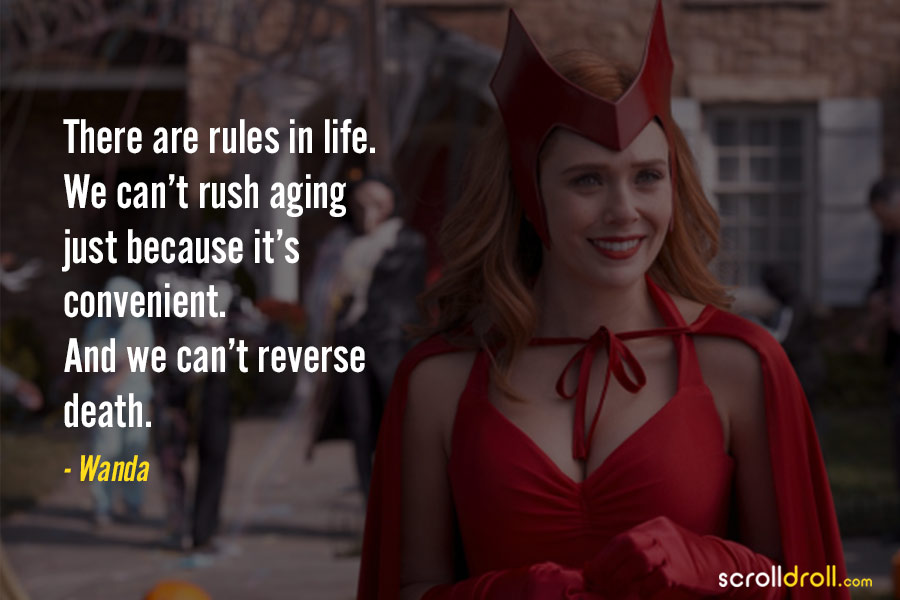 15. The fact that Marvel went to these lengths for a boner joke is what makes this whole thing even funnier.

“I know I look different.” – Pietro “We’ve all been there right? Letting our fear and anger get the best of us, intentionally expanding the borders of the false world we created.” – Wanda 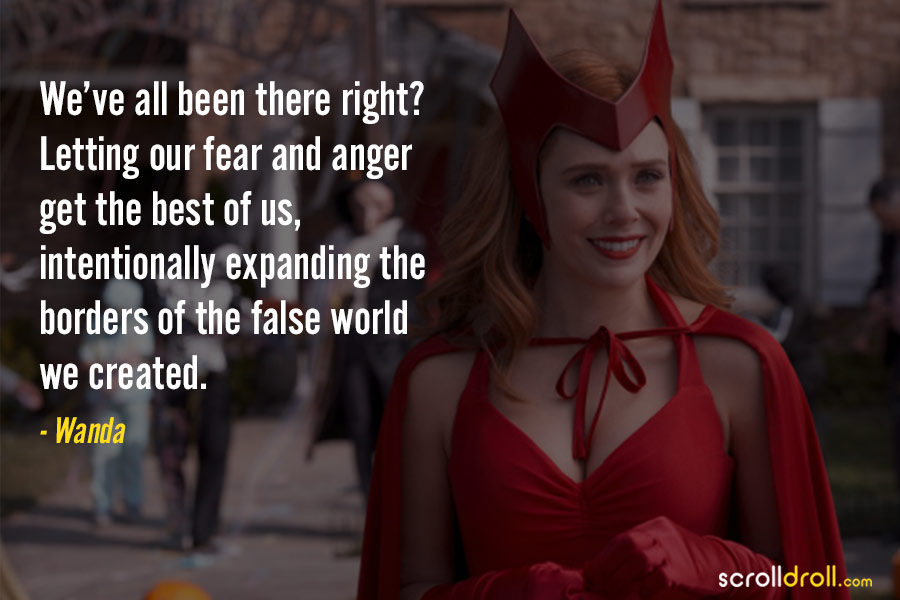 18. If they inherited anything from Vision at all is a question best left unanswered.

“Vision is made of vibranium. They literally inherited tough skin.” – Wanda 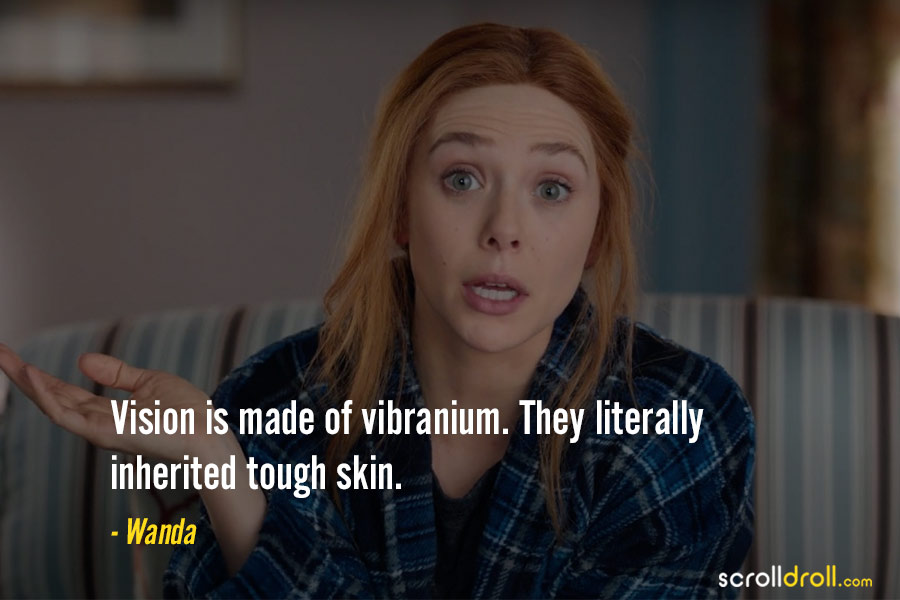 “You didn’t think you were the only magical girl in town, did you?” – Agatha Harkness 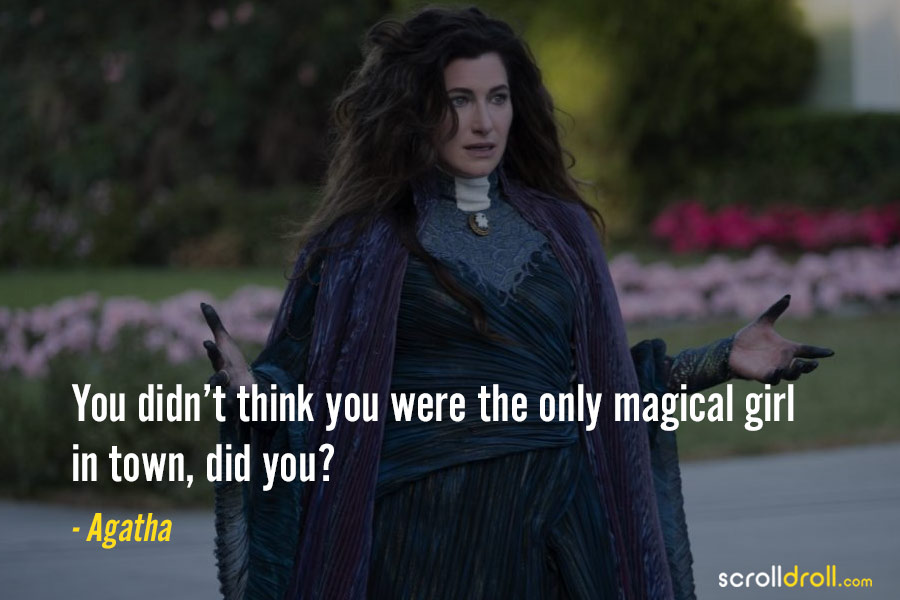 “It’s been Agatha all along.”

“And I killed Sparky too.” – Agatha Harkness 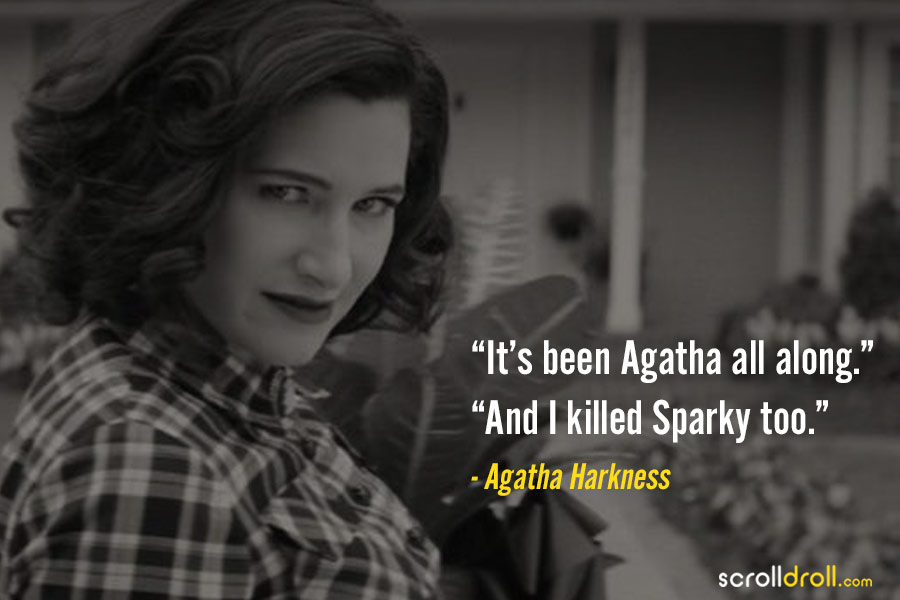 21. Agatha Harkness being OP since the Salem Witch Trials is the kind of history I wish they taught in school.

“I did not break your rules. They simply bent to my power.” – Agatha 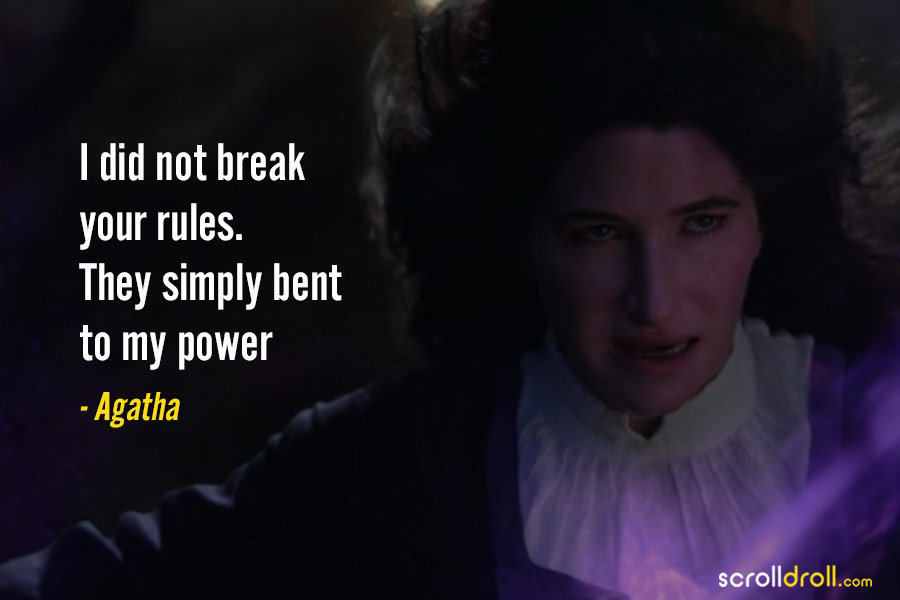 22. I love how much Wanda grew as a person during the course of this series.

“It’s just like a wave washing over me, again and again. It knocks me down, and when I try to stand up, it just comes for me again. It’s just gonna drown me.” – Wanda 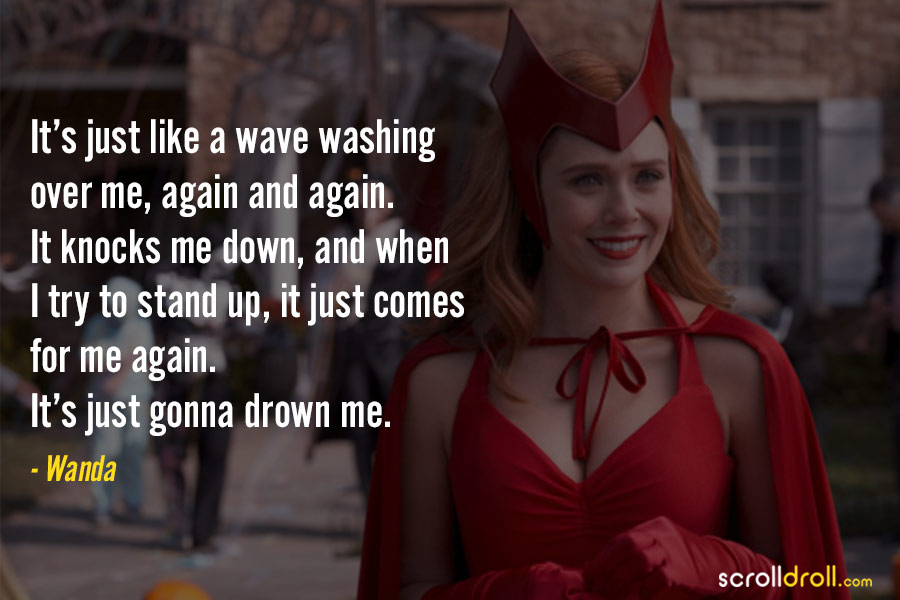 “But what is grief if not love persevering?” – Vision 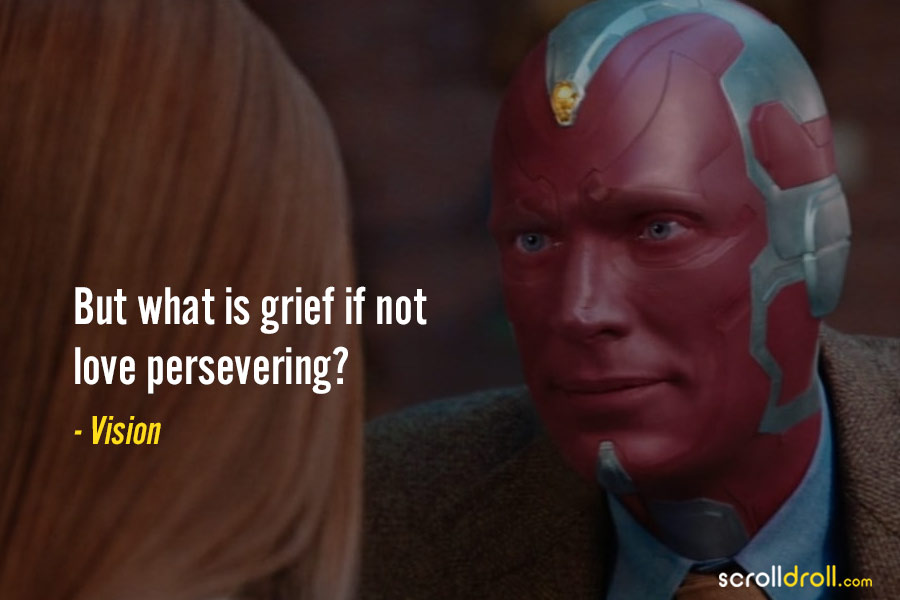 24. FYI, this is the first time anybody’s referred to Wanda as the Scarlet Witch in MCU.

“This is chaos magic Wanda, and that makes you the Scarlet Witch.” – Agatha 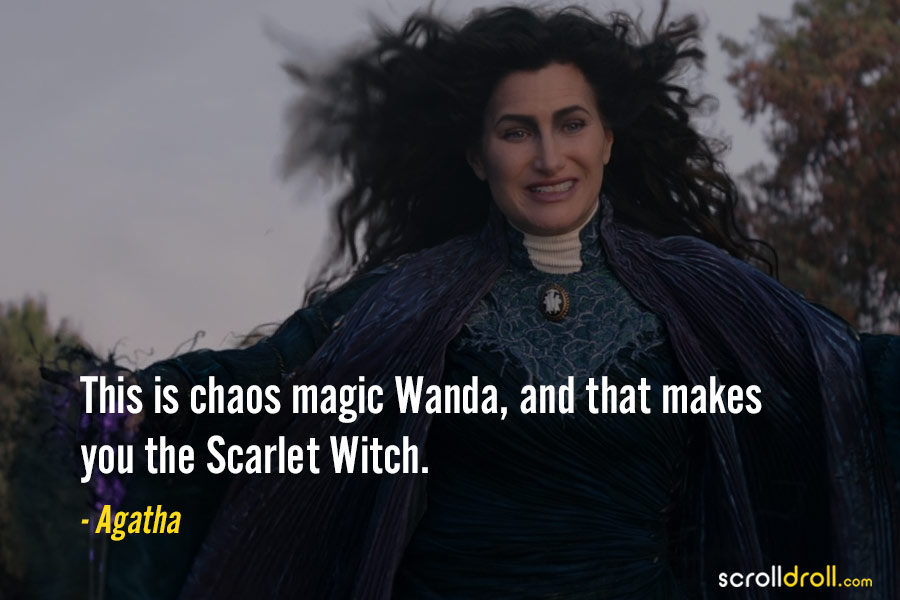 25. Jimmy Woo being the man of our dreams one cute twirl at a time. 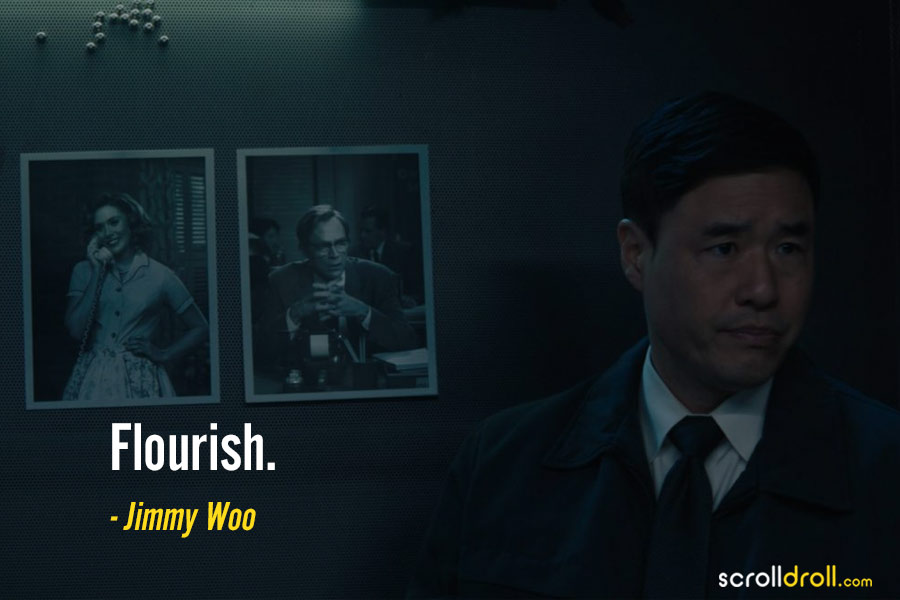 26. And yet we did not get a cameo from Doctor Strange. Tch tch.

“Your power exceeds that of the Sorcerer Supreme. It’s your destiny to destroy the world.” – Agatha 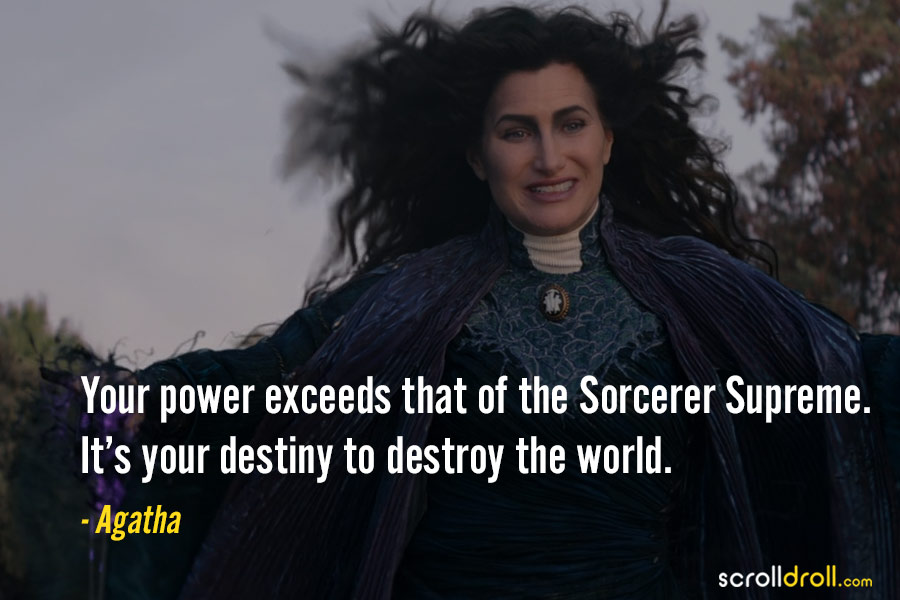 “You tied your family to this twisted world and now one can’t exist without the other.” – Agatha 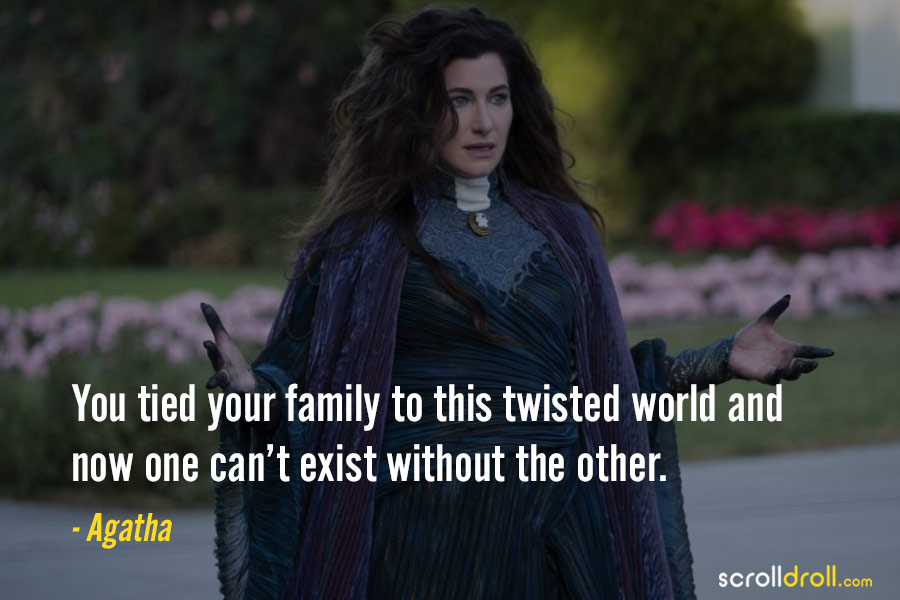 28. Petition to have a happy ending for the Maximoff-Vision family.

“A family is forever. We could never truly leave each other even if we tried.” – Wanda 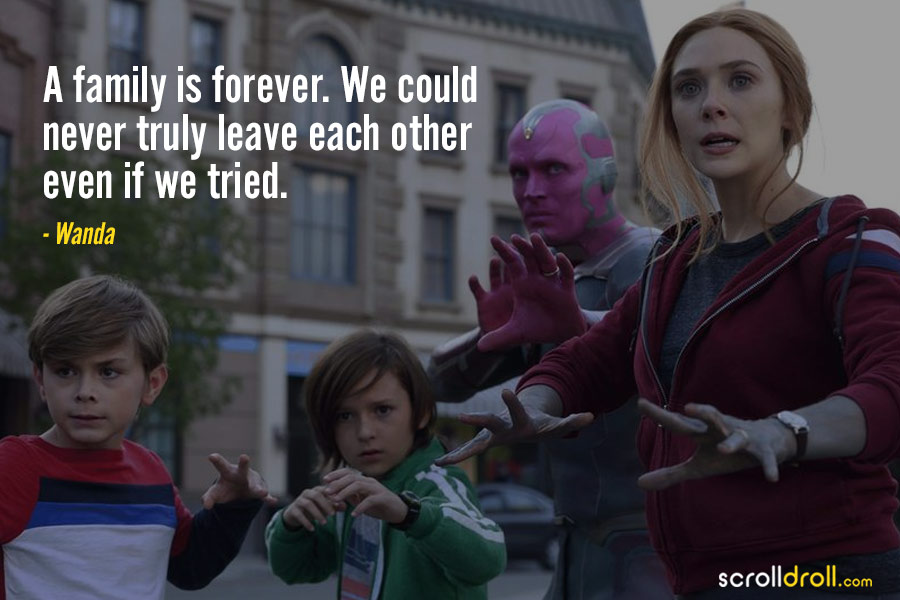 “You Vision, are the piece of the Mind Stone that lives in me. You are a body of wires and blood and bone that I created. You are my sadness and my hope. But mostly you’re my love.” – Wanda 30. There’s nothing I want more right now than these two to say hello again.

“We have said goodbye before. So it stands to reason…” – Vision 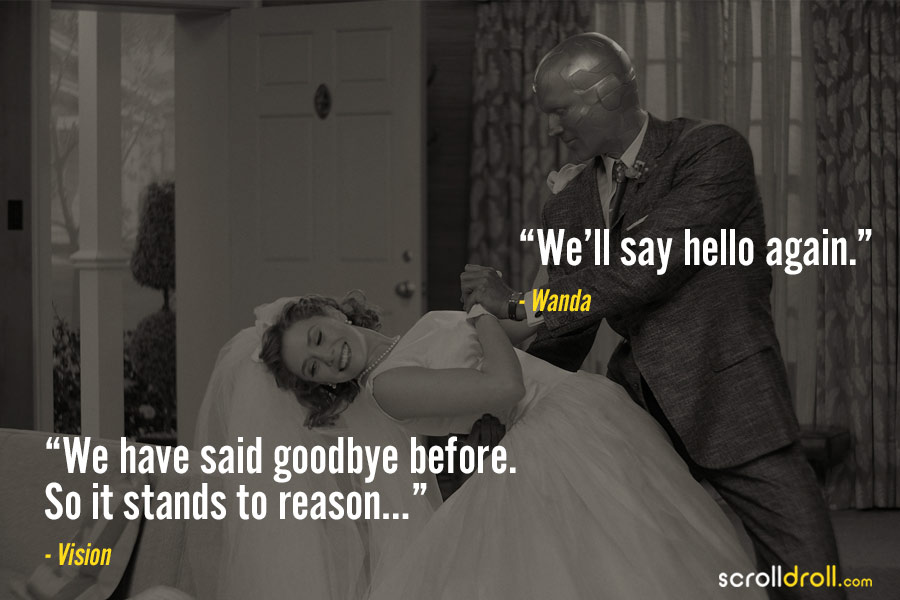 Did you like these dialogues from WandaVision? Which one was your favourite? Comment below to let us know!