Most of the Indian populace is unaware of the people and their practices in North East India. We bring to you some of the most interesting and lesser known facts about North East India with the hope of spreading awareness and love.

1) Football- the most widely played sport 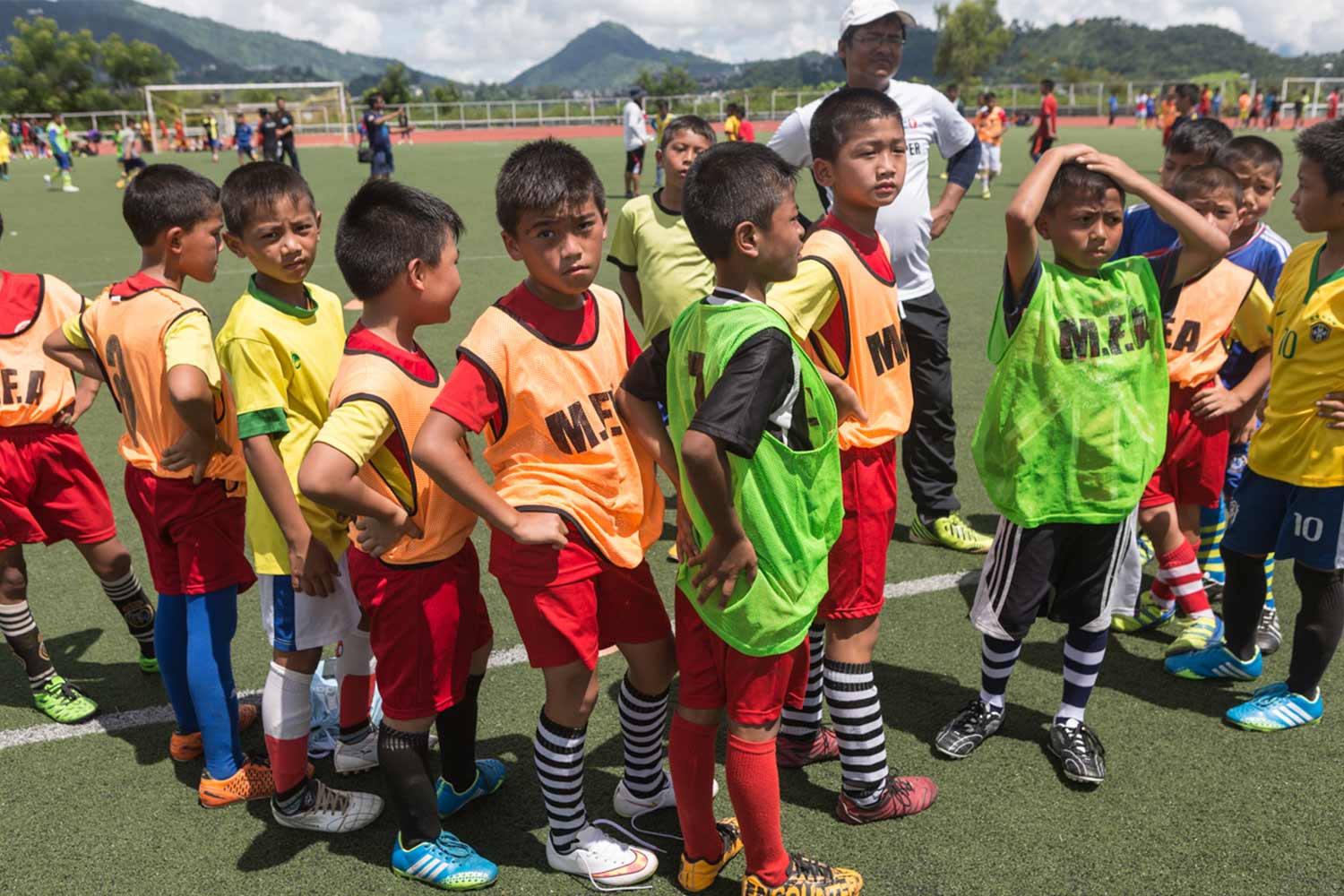 Three in every ten professional Indian footballers in I-League Division 1 come from the north-east, unlike the rest of the country which believes in cricket as the religion. Football is the sport which is most widely played and revered as a religion in the North East. Some of the most notable players from the Northeast are Bhaichung Bhutia (Sikkim) former captain of the Indian National football team, Renedy Singh (Manipur), Eugeneson Lyngdoh (Meghalaya), Jerry Lalrinzuala (Mizoram), Bidyanada Singh (Manipur) and many more. “Eight States, One United” North East FC’s slogan in the Indian Super League.
Image Source 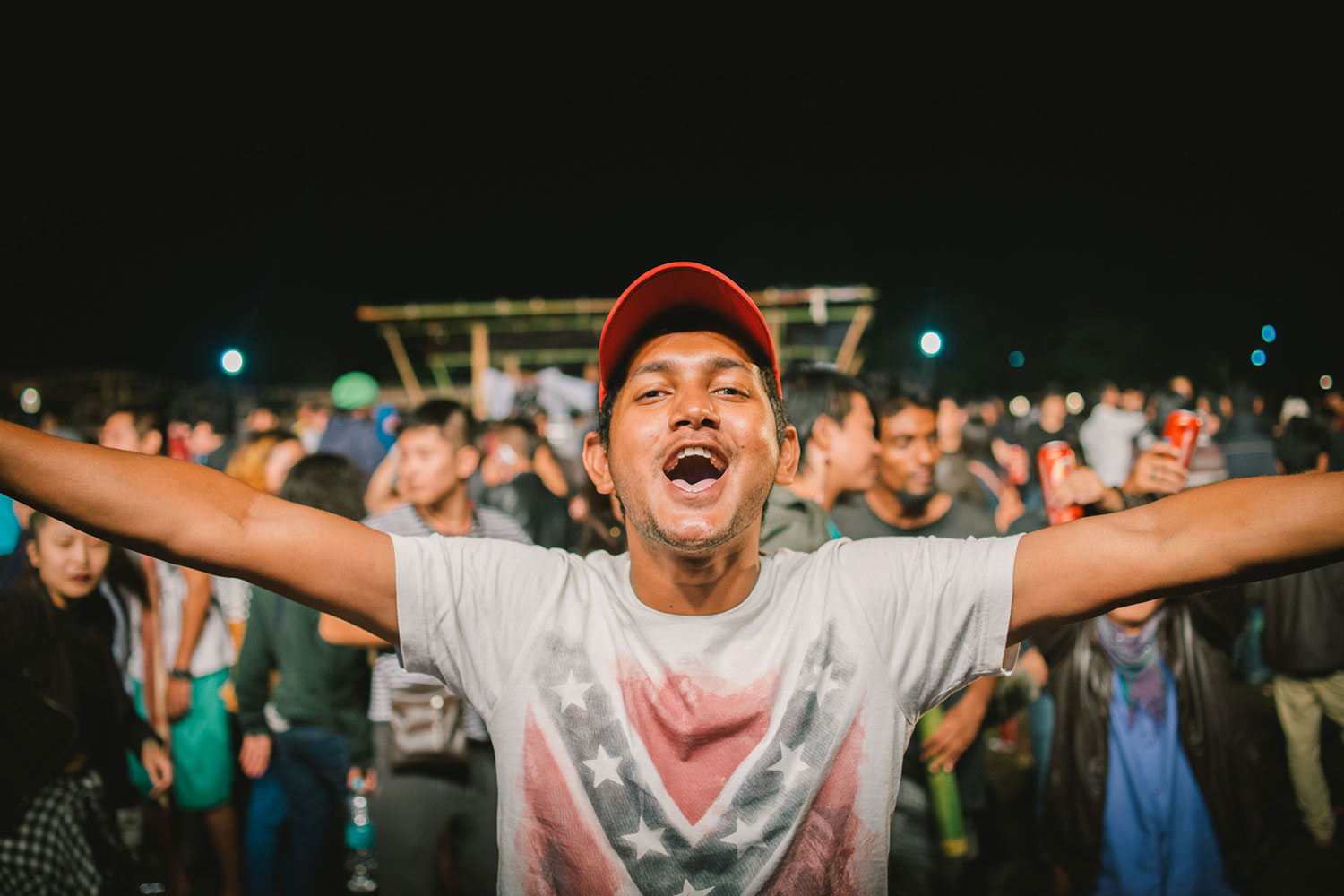 Music forms an integral part of the culture in North-East India, with genres like Rock, Hiphop, Metal, and Pop being the most dominant forms of music. When I was a young boy, my father handed me his collection of music which had cassettes from artist like Black Sabbath, Pink Floyd, The Rolling Stones, King Crimson, and Iron Maiden. Similarly many children are introduced to world music at a very young age and start learning some form of music or the other. The Hornbill Festival and The Ziro Music Festival are two of the most noted music festivals in India and Shillong has been dubbed as “India’s Rock Capital” for the thriving rock scene. Imphal Talkies, Street Stories,
Soulmate, Lou Majaw & Friends, Lucid Recess, Grish and The Chronicles, Damagera are some of the most successful bands and artist from the North East.
Image Source 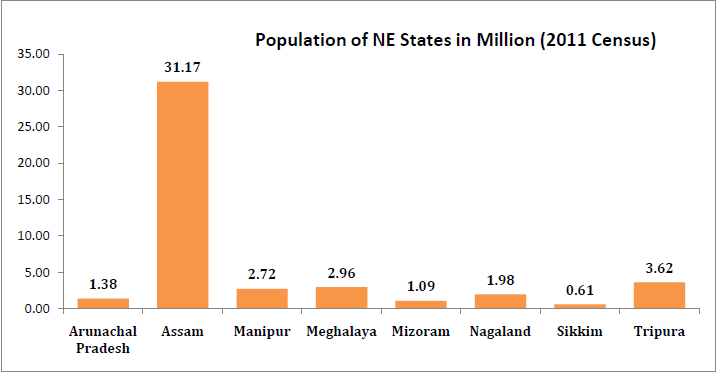 With and unbelievably low population density, the total population of the 8 states matching that of Odisha, the northeast is one of the most sparsely populated regions in all of the country. The population, though low has an immensely large diversity with as many as 220 different races and languages being spoken throughout the region.
Image Source 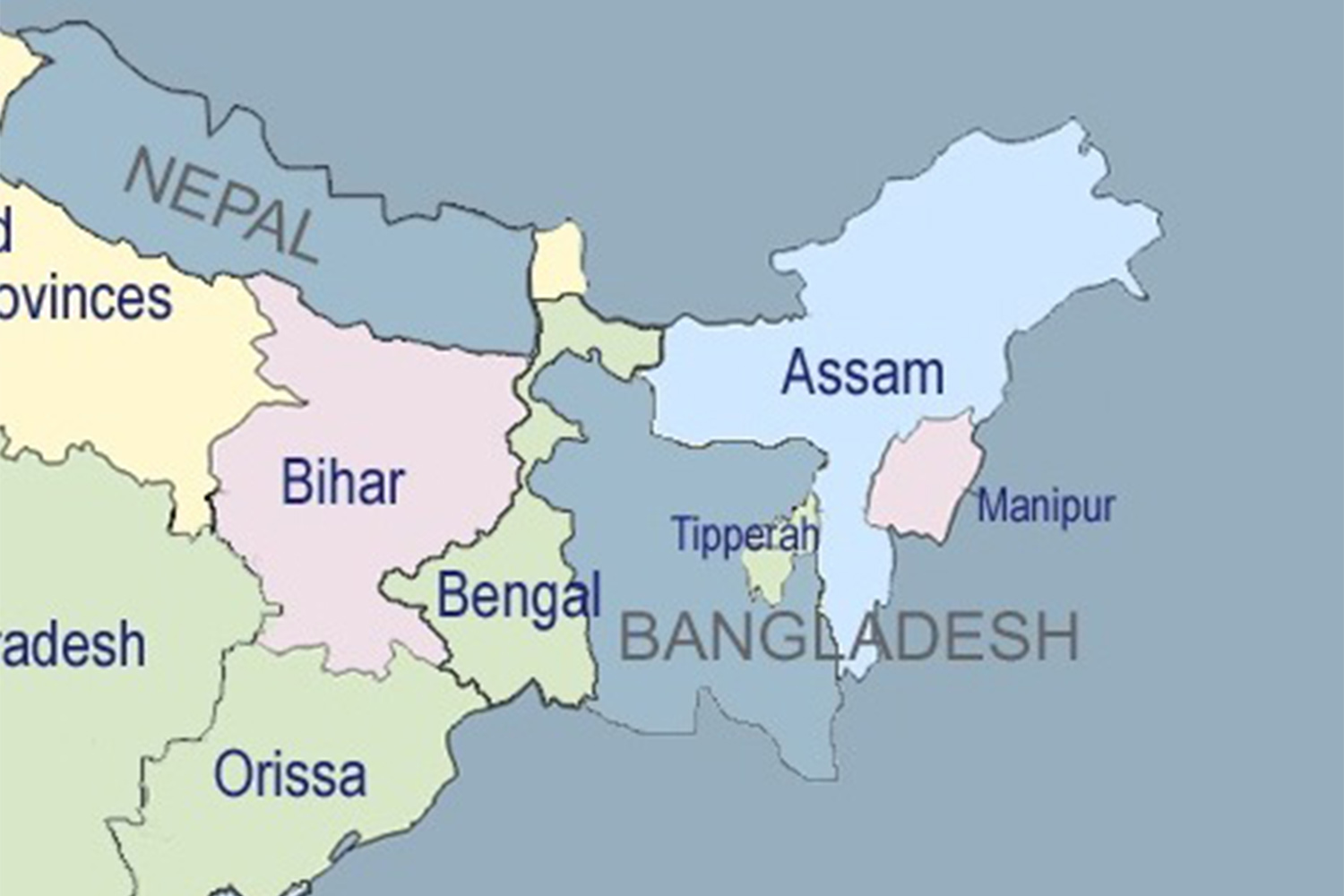 The present division of states were not the same till 1963, the states were divided into only 3 states, and they were Assam, Manipur and Tipperah. Sikkim is the most recent addition to the North Eastern Council, it was added as the 8th member of the Council in 2002.
Image Source 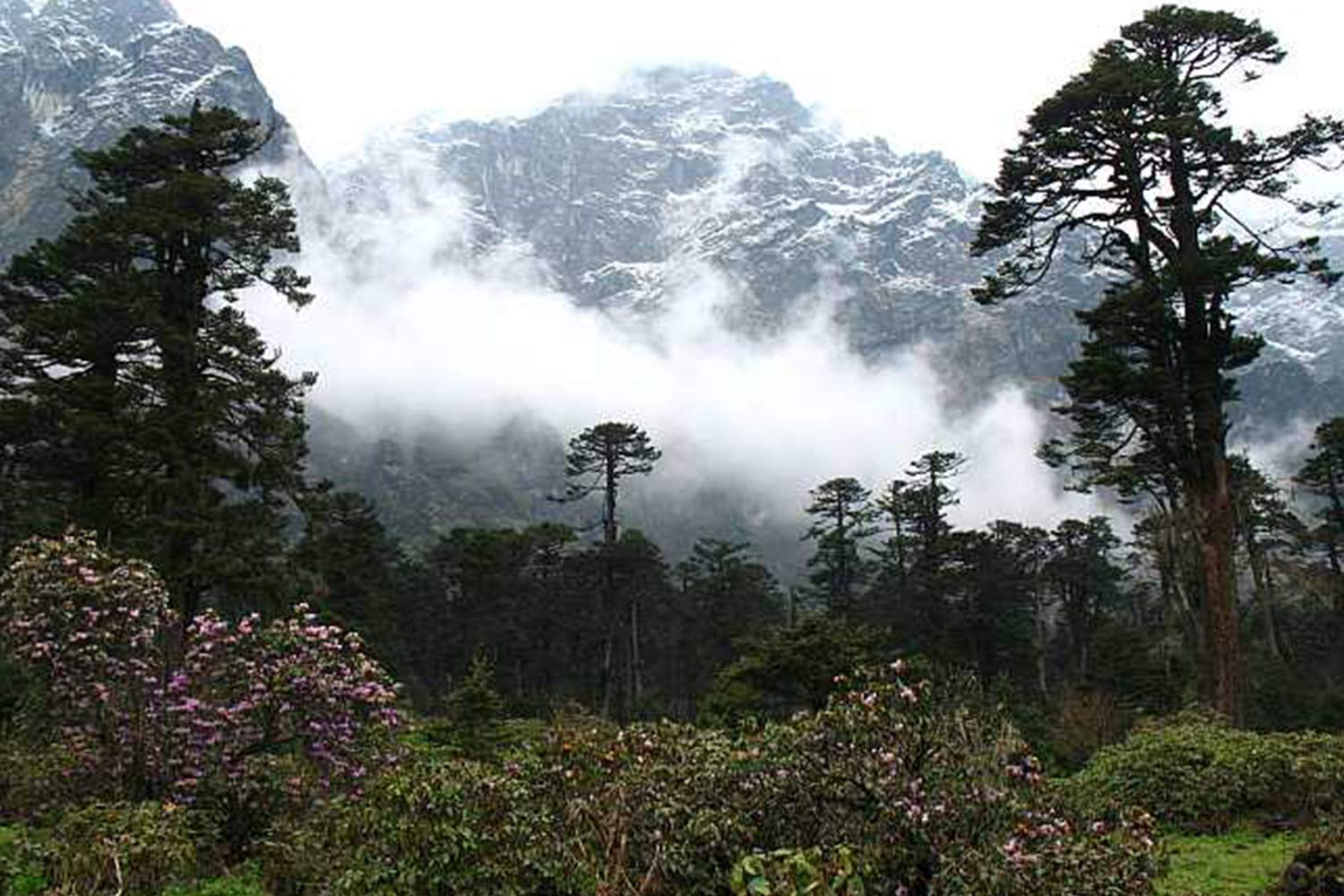 The North East is blessed with rich and thriving biodiversity which is high in endemism and holds a large number of rare species that are now under serious threat. It is a biodiversity hotspot and has multiple forms of biodiversity for example, in the State of Sikkim, where the floral and faunal assemblages change rapidly from tropical to subtropical, temperate, alpine and finally to cold desert forms. The tropical semi- evergreen and moist deciduous forests in the lowlands of this region extend south and west into the subcontinent, and east into Southern China and Southeast Asia. The subtropical forests of the region follow the foothills of the Himalaya to the west; also extend into Southeast China in the east.
Image Source 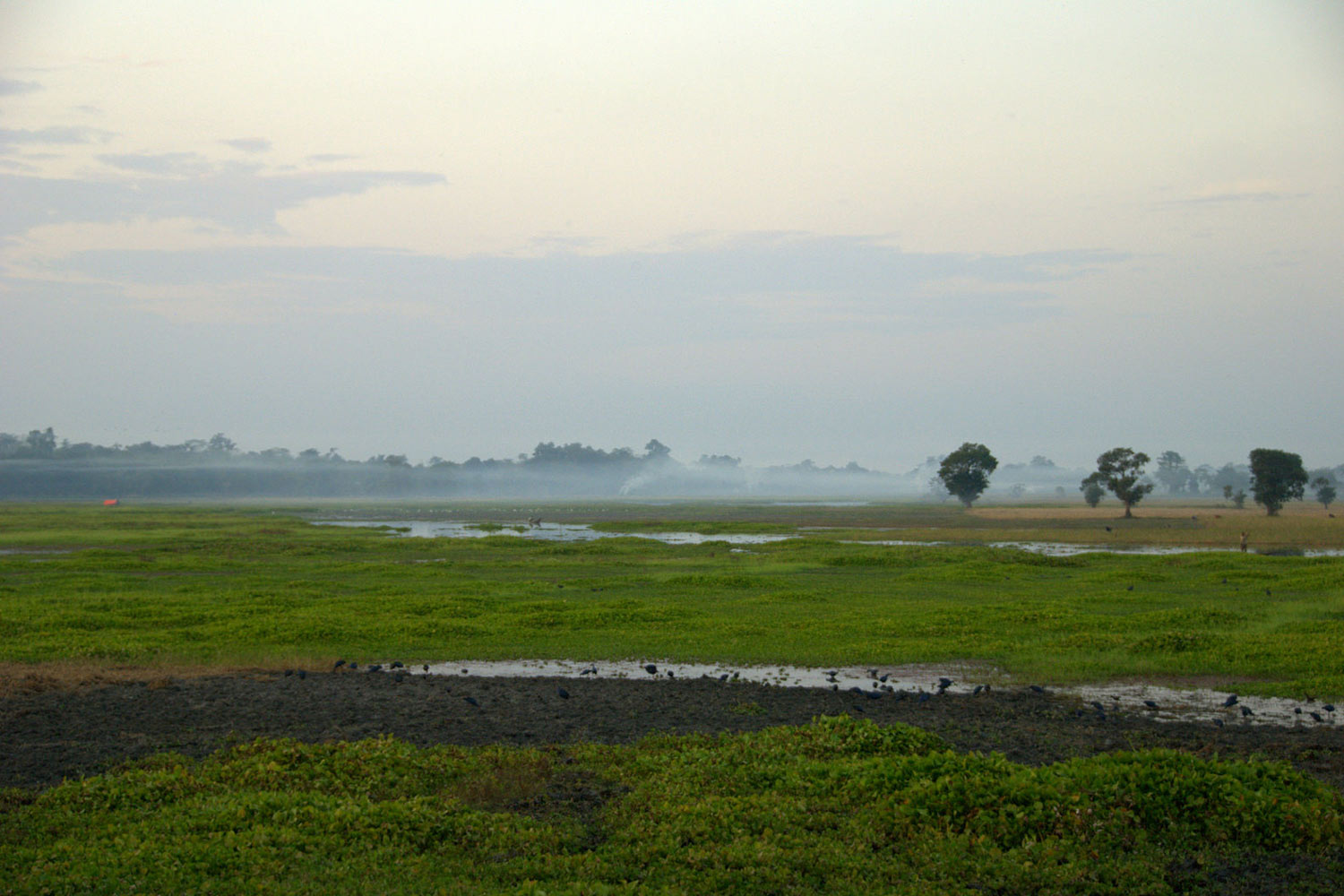 Majuli in Assam is the largest river island in the world and it is also the first island of the country. The island is formed by the Brahmaputra in the south and the Kherkutia Xuti, an anabranch of the Brahmaputra, joined by the Subansiri River in the north. Majuli island is accessible by ferries from the city of Jorhat. The island lies 300 kilometers to the east of Guwahati. It was formed due to course changes by the river Brahmaputra and its tributaries, mainly the Lohit River.
Image Source 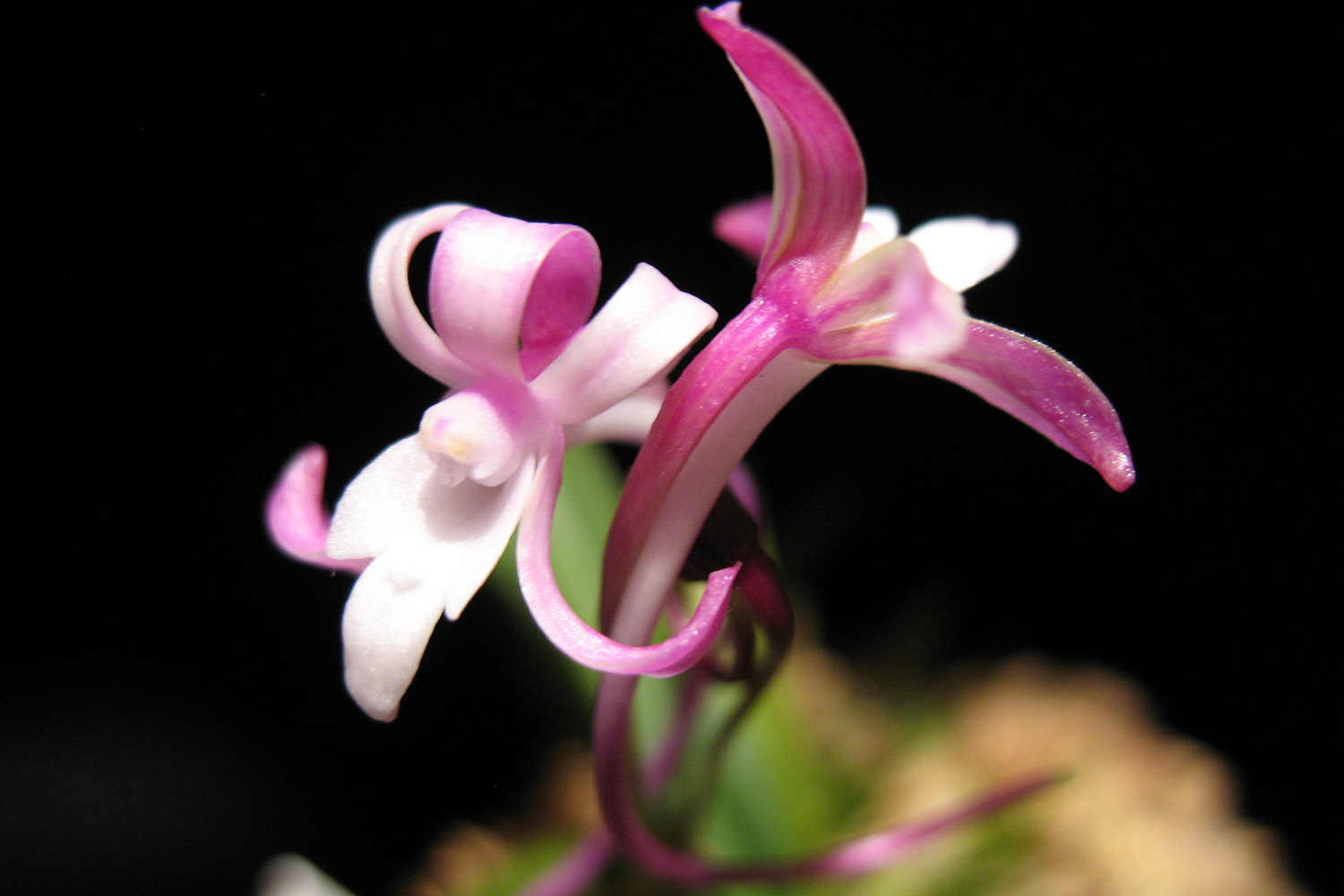 About 70% of the world’s orchids are found in the North East. There are 127 species, and 6 varieties belonging to 52 genera are endemic to this region and the highest concentration of orchids lie in Arunachal Pradesh and Sikkim. The Sessa Orchid Sanctuary in Arunacha Pradesh is the country.
Image Source 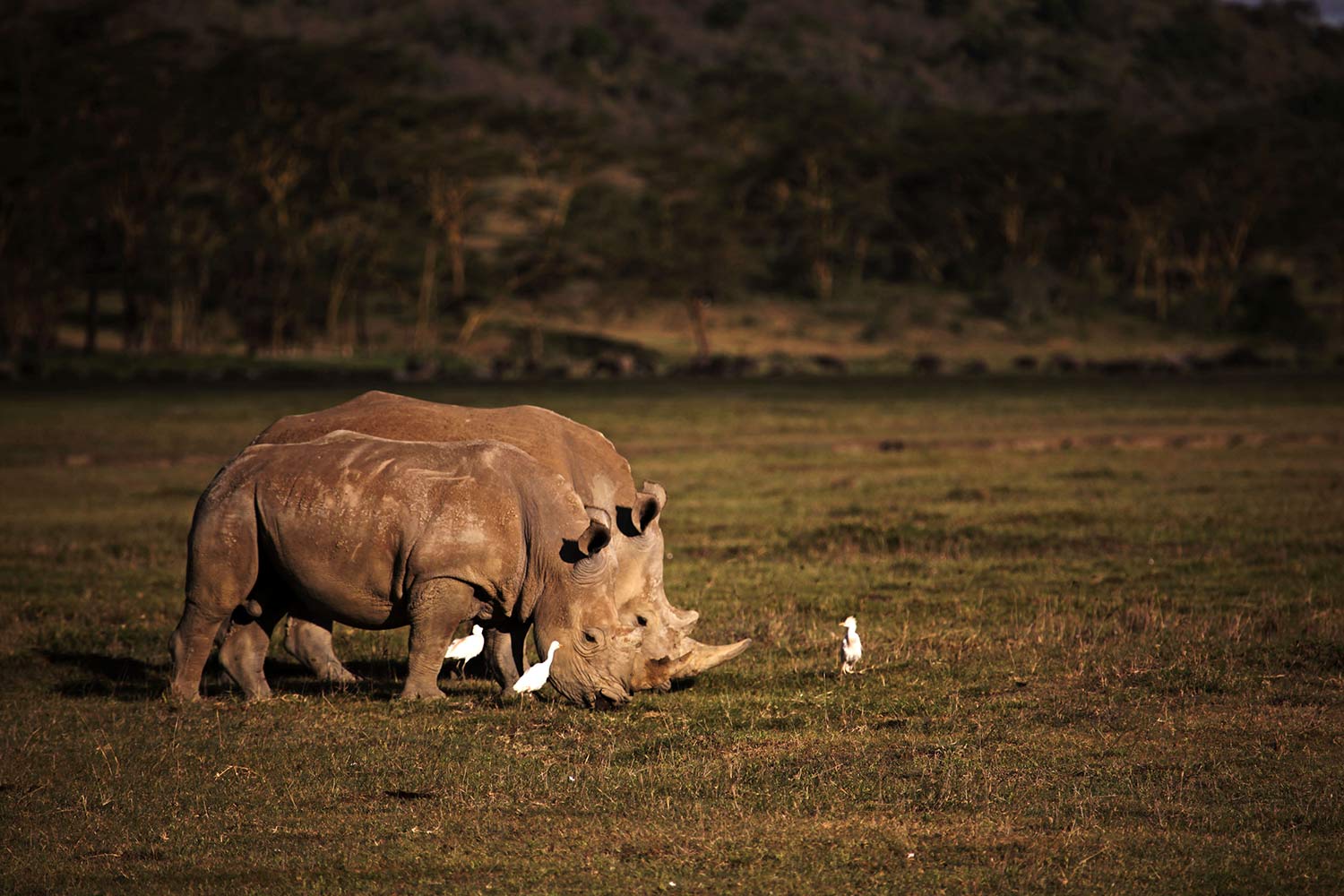 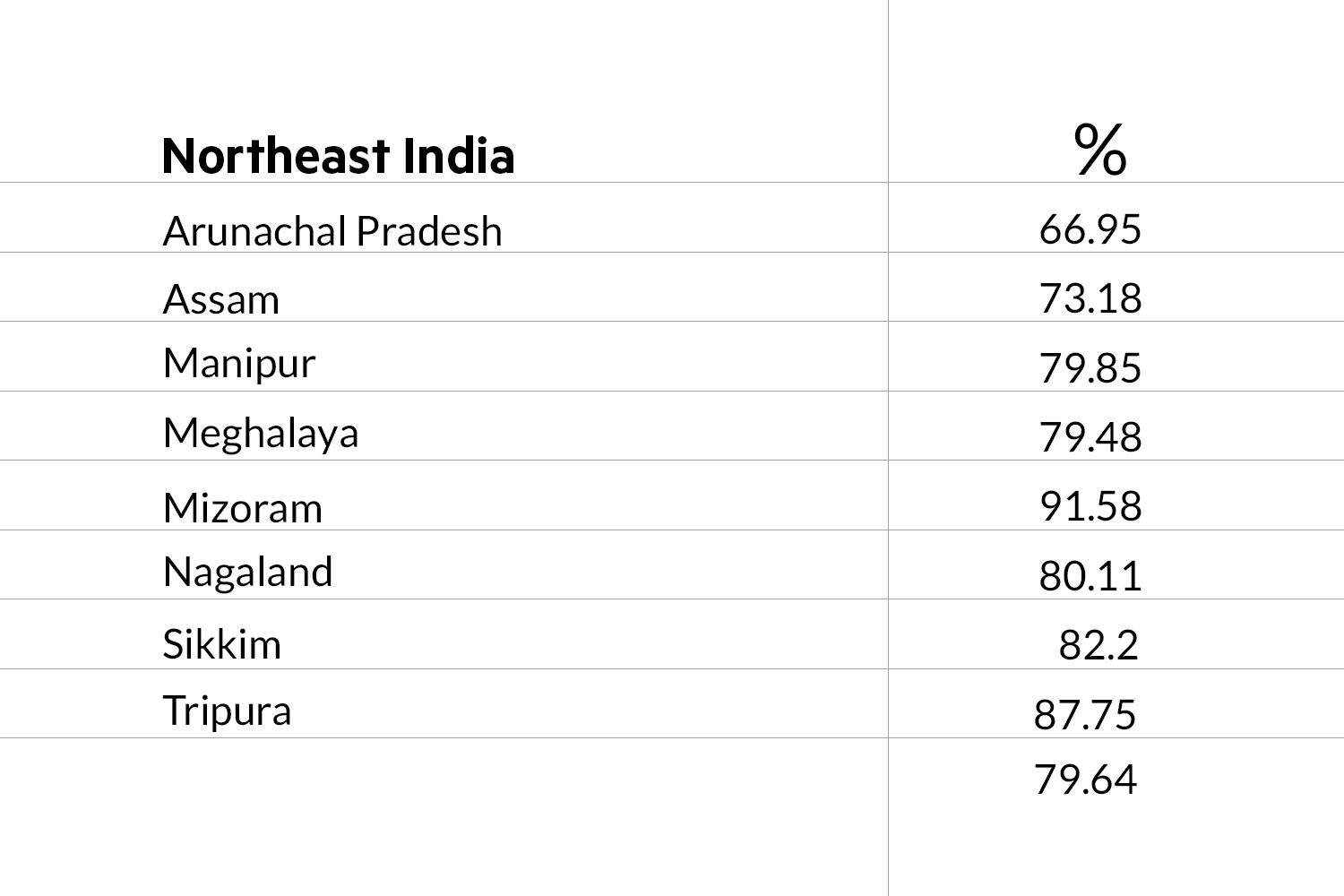 Mizoram and Tripura are two states in the North East which have some the highest literacy rates in the country, with 91.58% and 87.75% respectively. The entire population the region has a combined literacy rate of 79.64% which is higher than the literacy rate of the entire country which was 74.o4% according to the census in 2011.
Image Source 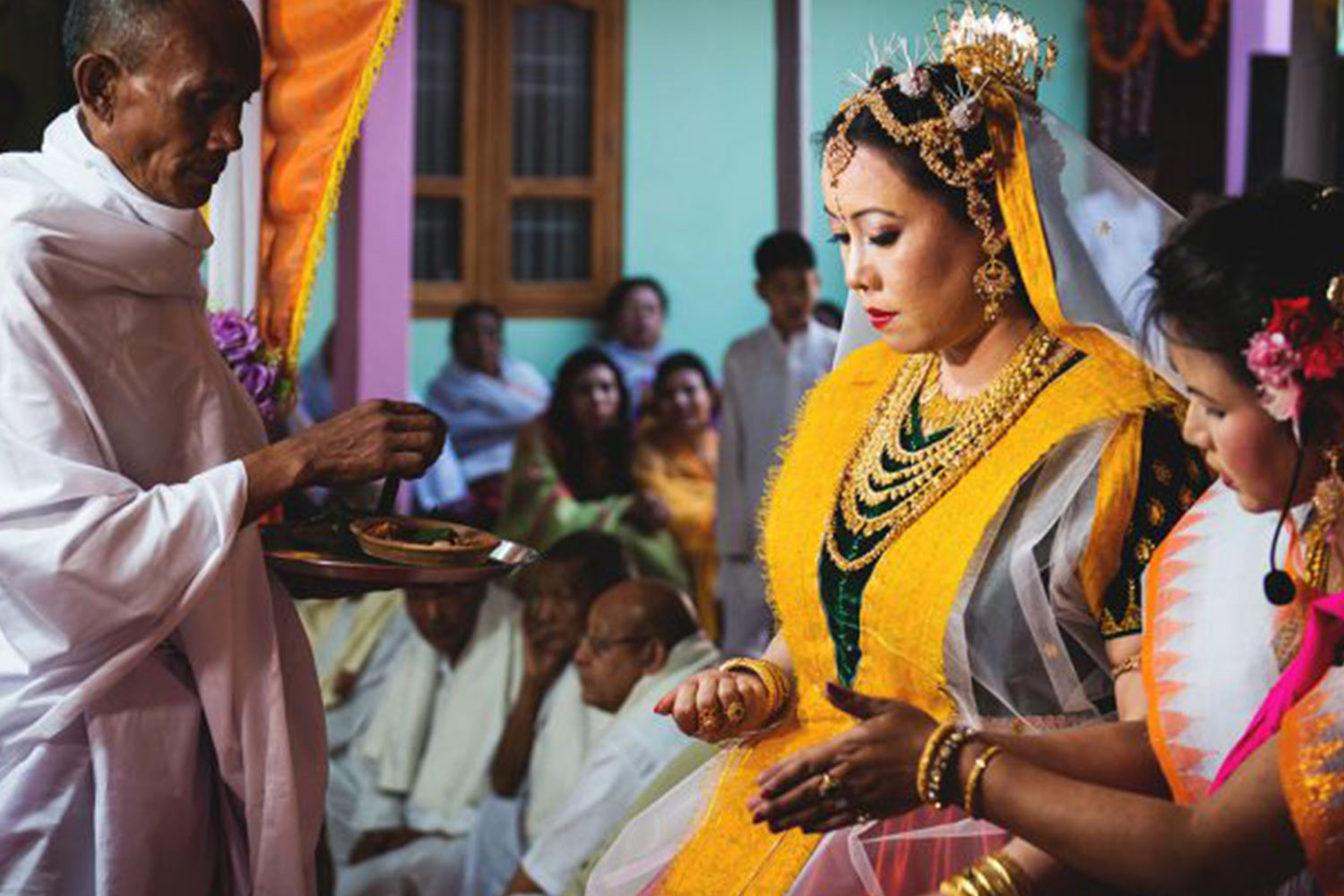 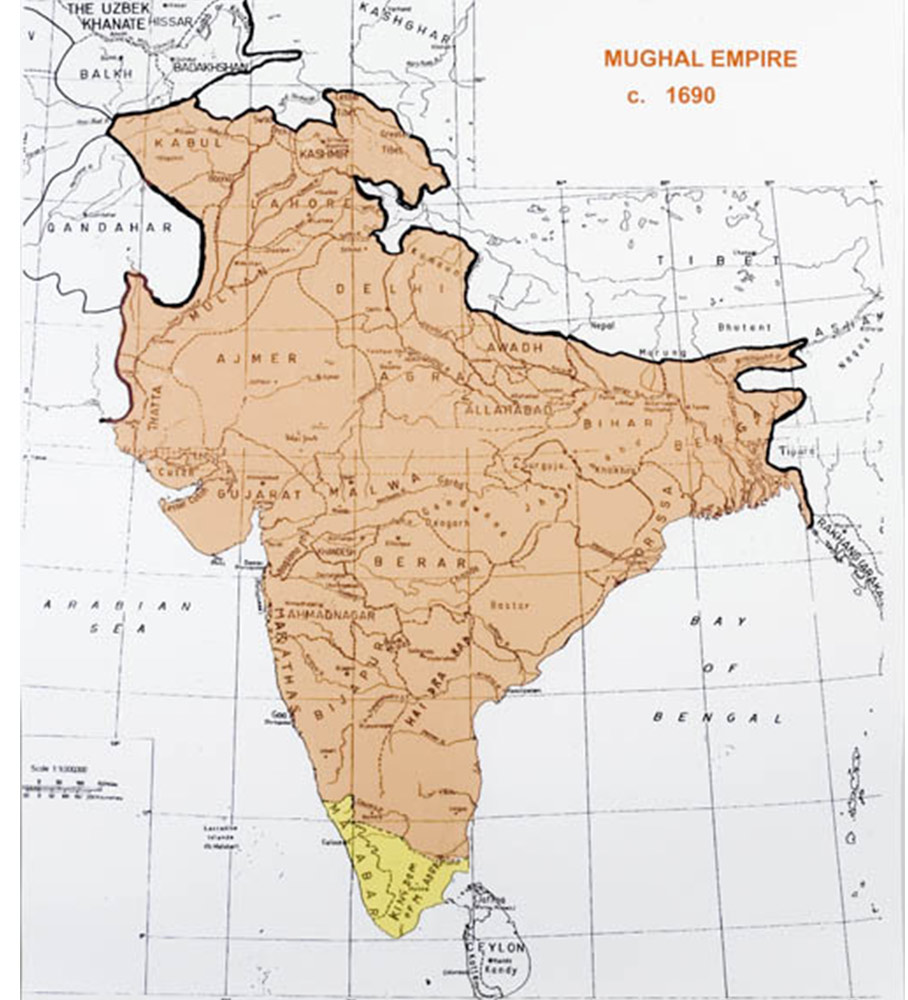 The Mughals ruled almost the entire Indian subcontinent with borders stretching from the Karakoram Range to the Deccan Peninsula in the south and from Bengal in the east to modern day Afghanistan in the west. Yet they never set foot in the North East. The North East is one of only three regions of the country to have never been included in the Mughal empire along with the Chola and Pandaya Kingdoms in the South.
Image Source 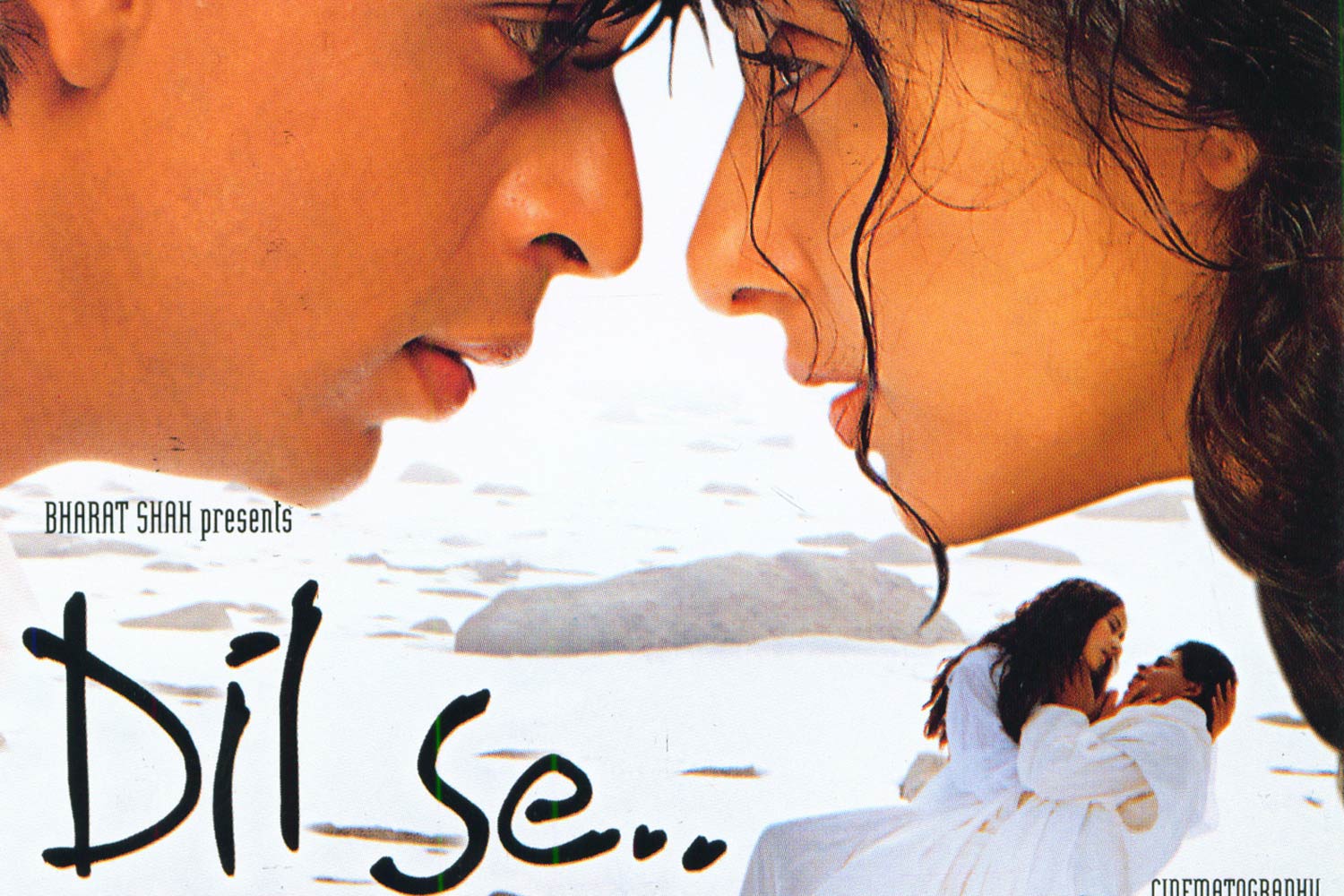 Maniratnam’s 1998 blockbuster, starring Shahrukh Khan and Manisha Koirala is one of the only films from the mainstream Bollywood releases that was based on the insurgency in the North East. Noted for its non linear screenplay, the film won awards for cinematography, audiography, choreography, and music, among others. The film was a success overseas earning $975,000 (USA) and £537,930 in the UK, becoming the first Indian film to enter the top 10 in the United Kingdom box office charts. The film won two National Film Awards, and six Filmfare Awards. The movie is said to be a journey through the 7 shades of love that are defined in ancient Arabic literature. Those shades are defined as attraction, infatuation, love, reverence, worship, obsession, and death. The character played by Shahrukh Khan passes through each shade during the course of the film.
Image Source

13) Sikkim- the most environmentally conscious state in India 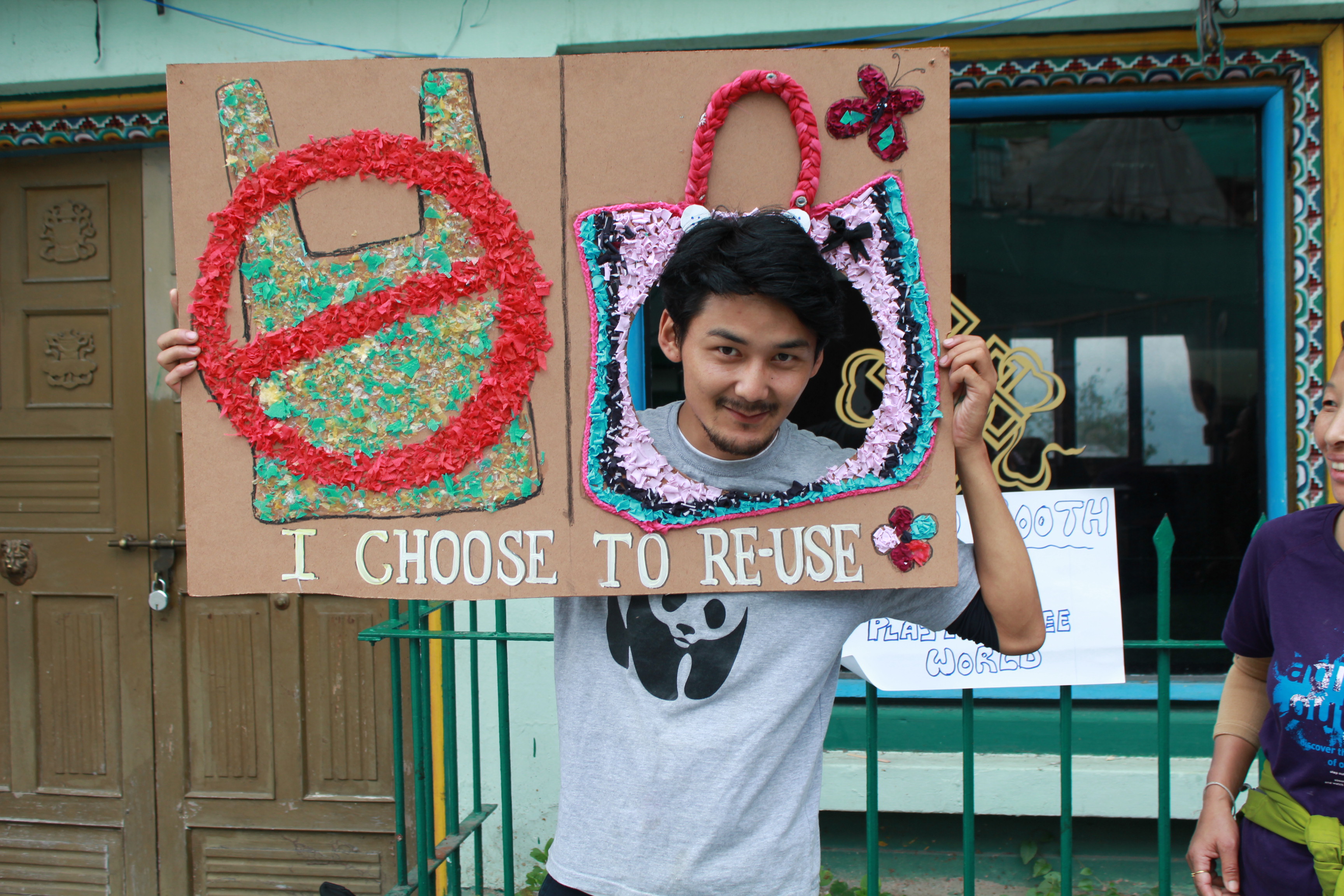 The small Himalayan state of Sikkim is one of the most environmentally conscious states in the country. The state banned the use of plastic bags and Styrofoam in the year 2000 with protests starting as early as 1997. In the year 2016, the state was declared to be 100% organic with the execution of the program in the financial year of 2005-2006. The state was the first Indian state to ban public smoking and there are countless protection programs to promote sustainable biodiversity conservation, afforestation, eco-tourism and other sustainable income-generating activities, that are going on in the state headed by different departments of the state government in collaboration with NGO’s and self-help groups
Image Source 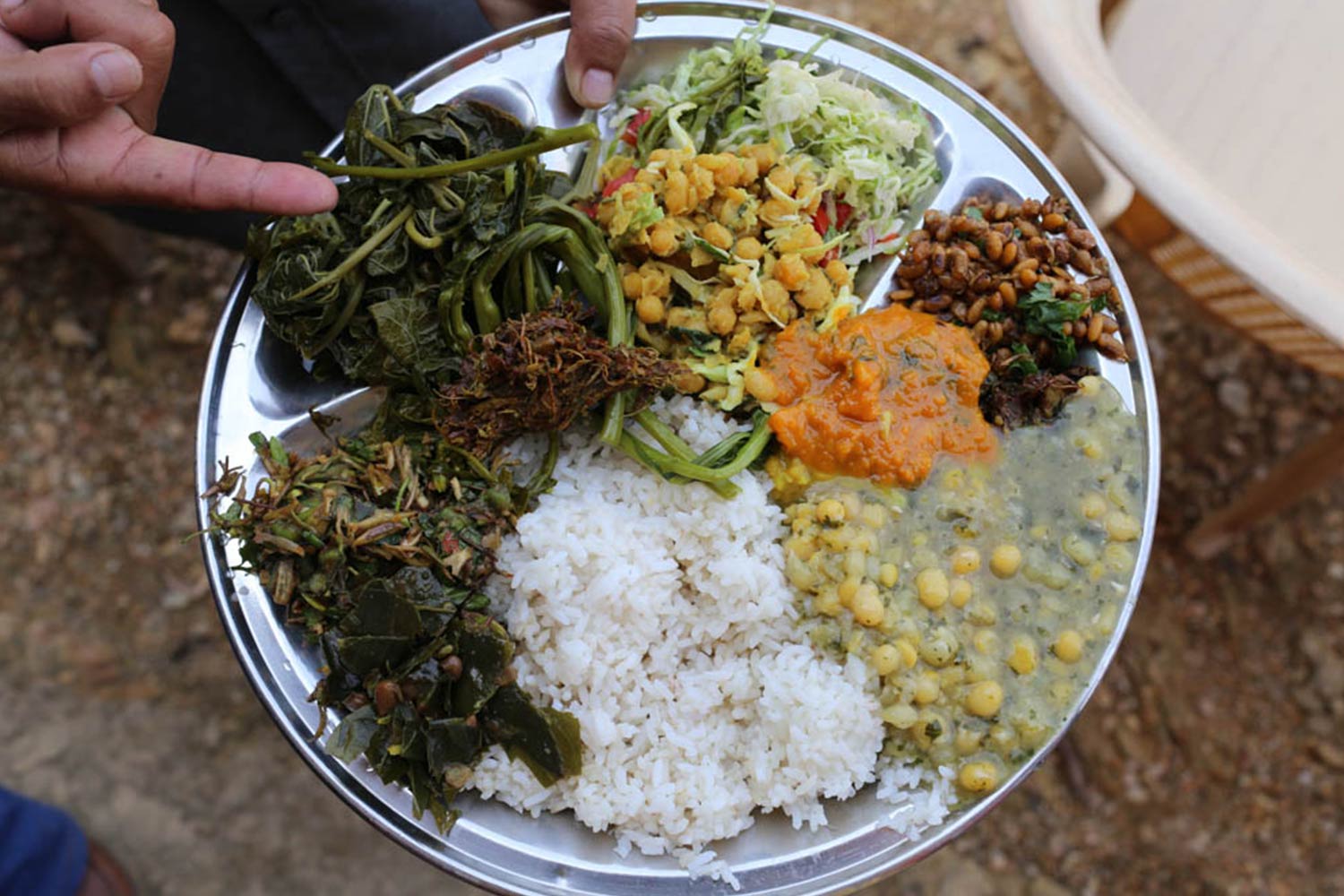 Most people are still under the impression that the people of the North East eat unconventional foods like insects and roots and other small animals. Well, that is not entirely true. Rice forms the most important part of almost every meal eaten throughout the North East along with meats like beef, pork, mutton, chicken and a wide variety of fish. Fermented soya bean and bamboo shoot are delicacies in the Manipuri, Naga, Sikkimese, Mizo and Assamese cuisines. Pork finds its place in almost every major celebration be it marriage or birthdays of festivals and the food is mostly boiled (vegetables) or cooked with very little oil.
Image Source

The North East is not as alienated a place as you think it might be. There are some amazing landscapes and some of the most humble people reside in the region with an unparalleled harmony with nature and their surroundings. Though the population is low, it is compensated by the big hearts of the people of the region.