Netflix’s first Indian Original series- Sacred Games is undoubtedly binding and has garnered a massive fan following just within few days of its release. Not only does the political crime thriller involve uncompromising performances but also, the stout-hearted dialogues in the superbly crafted thriller gives us quick reality checks of the world we live in.
Ganesh Gaitonde needs no introduction as the whole story revolves around his character. Played by Nawazuddin Siddiqui, the character delivers such powerful and thought provocative dialogues that push us to quarry into our memory palaces. Let’s take a look at the truth bombs Ganesh Gaitonde drops in Sacred Games!

1. Do you believe in God? God doesn’t give a fuck! 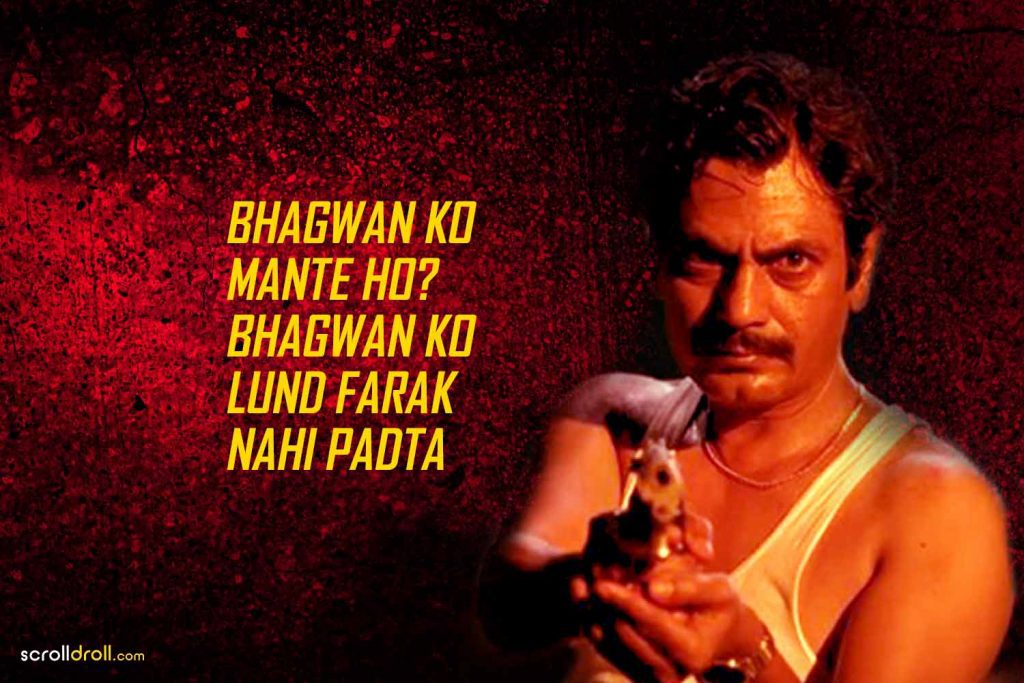 A spine-chilling dialogue to open a series in a God-fearing nation like India! Didn’t we get mind-fucked when the dialogue fell on our ears?

2. From Hindu hotel I learnt that in the name of religion people can be fooled beyond limits. 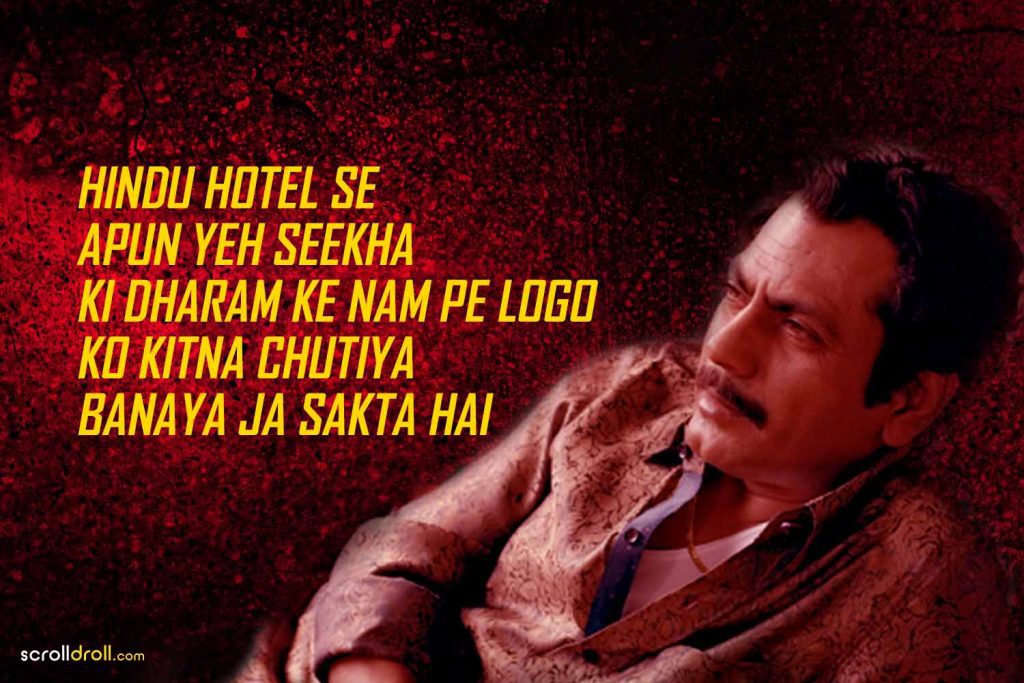 Reminded us of all the times Hindus and Muslims were pitted against each other by manipulative politicians and governing bodies. Communal riots, violence and unforgiving agony, India experienced so much. All for what? Religion!

3. The more a person is dark on the inside, the more he tries to be silvery on the outside 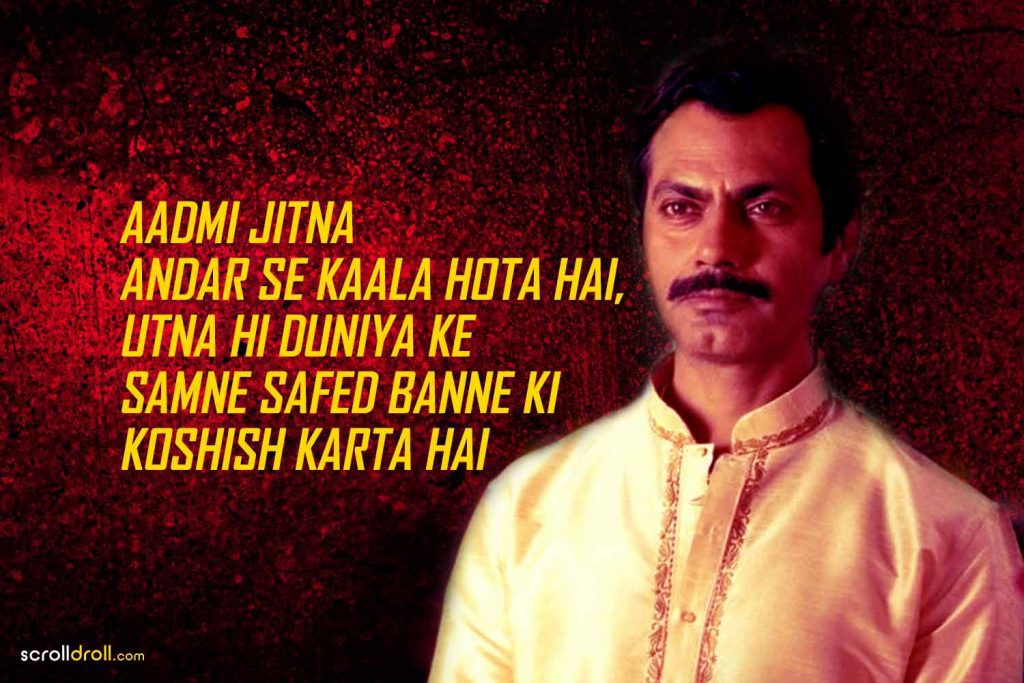 Sharply points out the dual nature of humans to make things appear pleasant on the outside while the inner being is corrupt and rusted.

4. That day I learnt a new game. Drugs, guns, property are all small businesses, real business is Politics 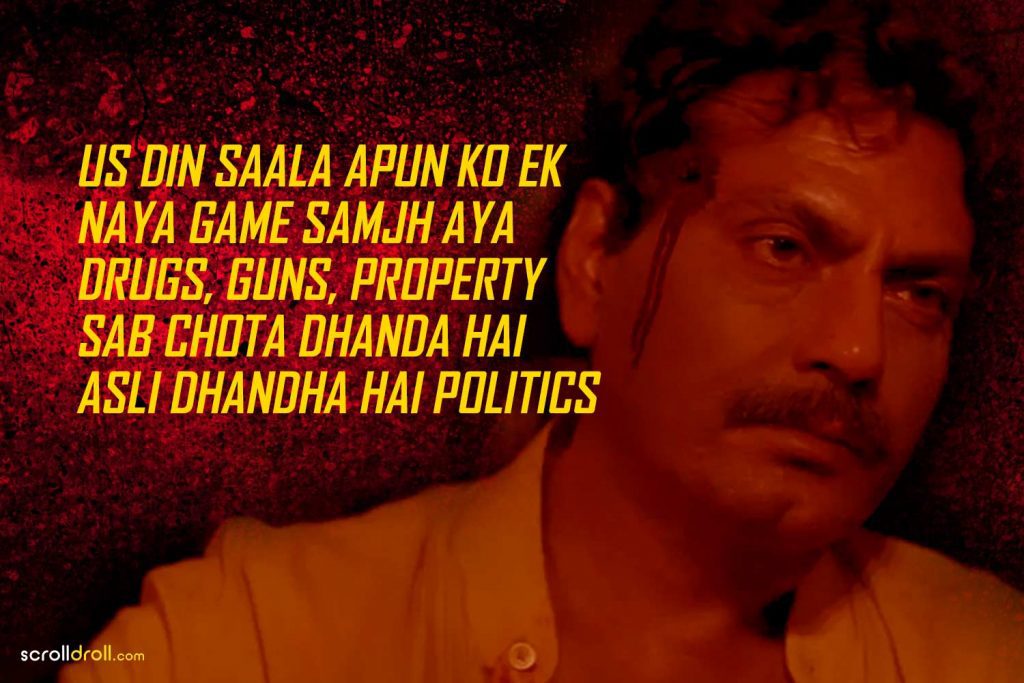 You can’t call us a cynic for sharing the same view as Gaitonde. Evidently, politics is a business in India, or can we say family business? After all, there is no gambling like Politics!

5. While I was running behind Kukoo, the nation was after the temple 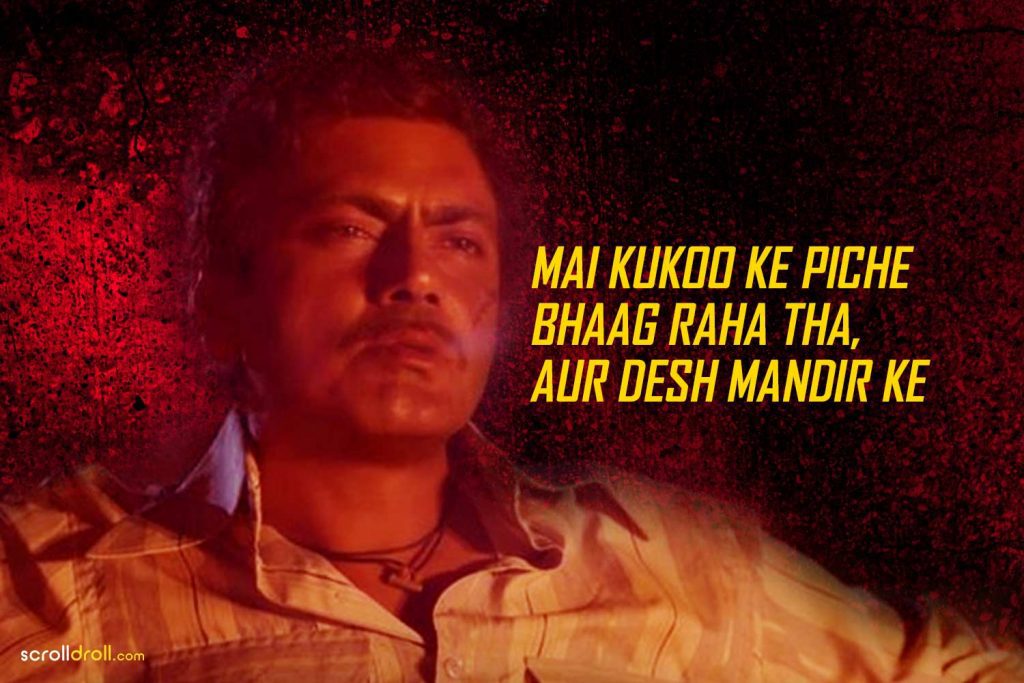 Cleverly and cleanly pinpoints the apathy of the nation on the Ram Mandir-Babri Masjid dispute.

6. Only the heart wasn’t bleeding, cock was too! 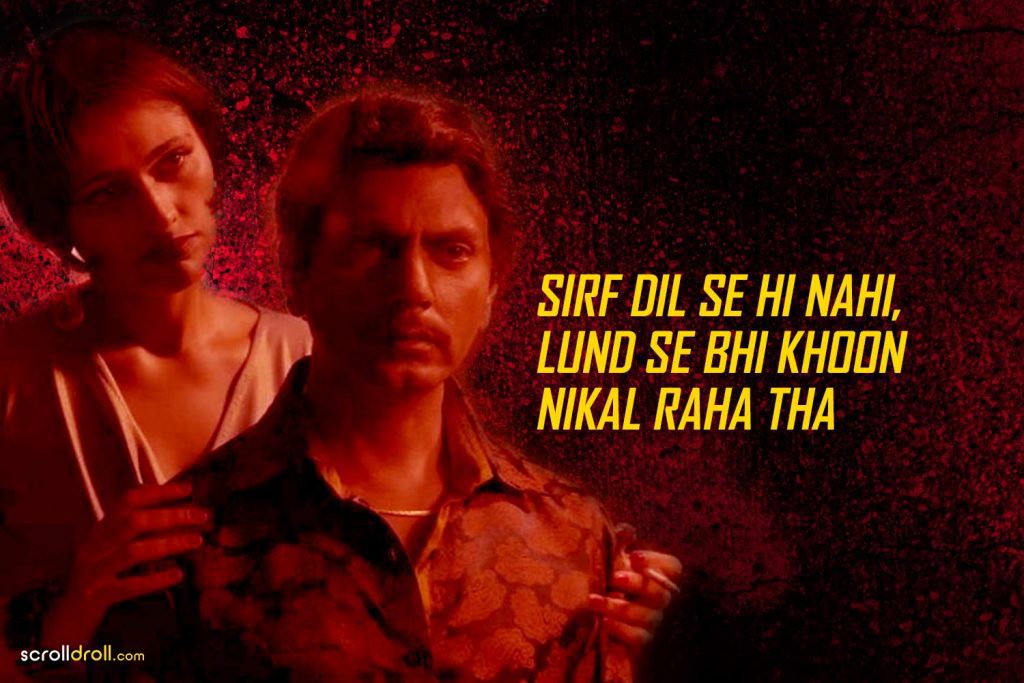 The scene that incorporates this dialogue reassured our faith in Karma. Didn’t it? Although it was cringy while Gaitonde was in the Anda cell, it had us dwell upon the thoughts of ‘what goes around comes back around’.

7. The biggest business in the market of life is religion 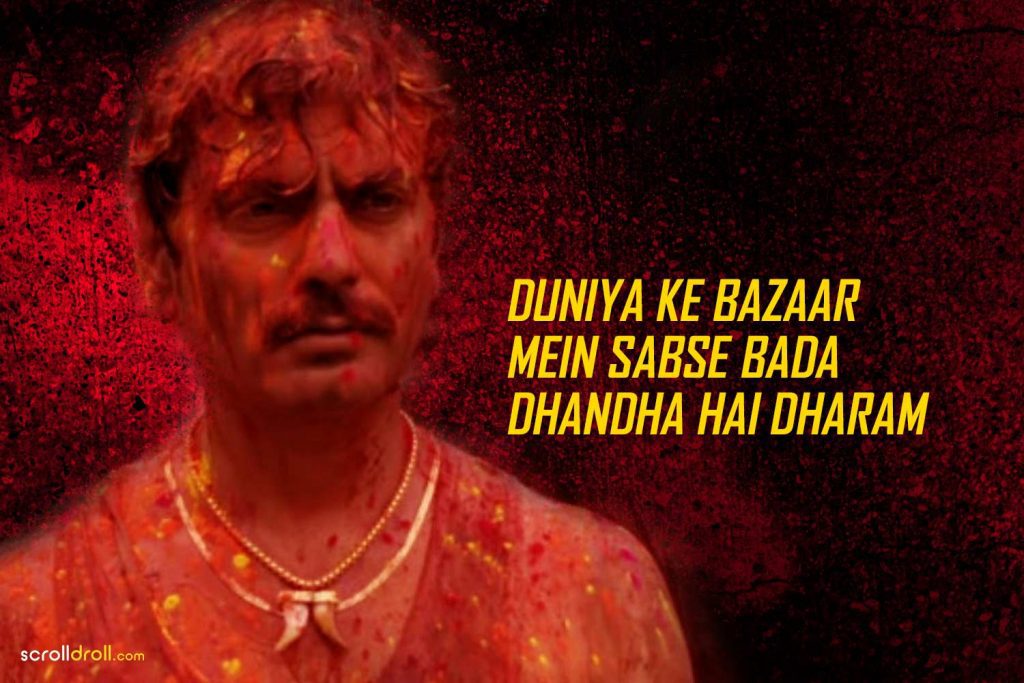 Well, governments are promoting ‘religious tourism’, so can we argue?

8. They make the public fear God and fool them 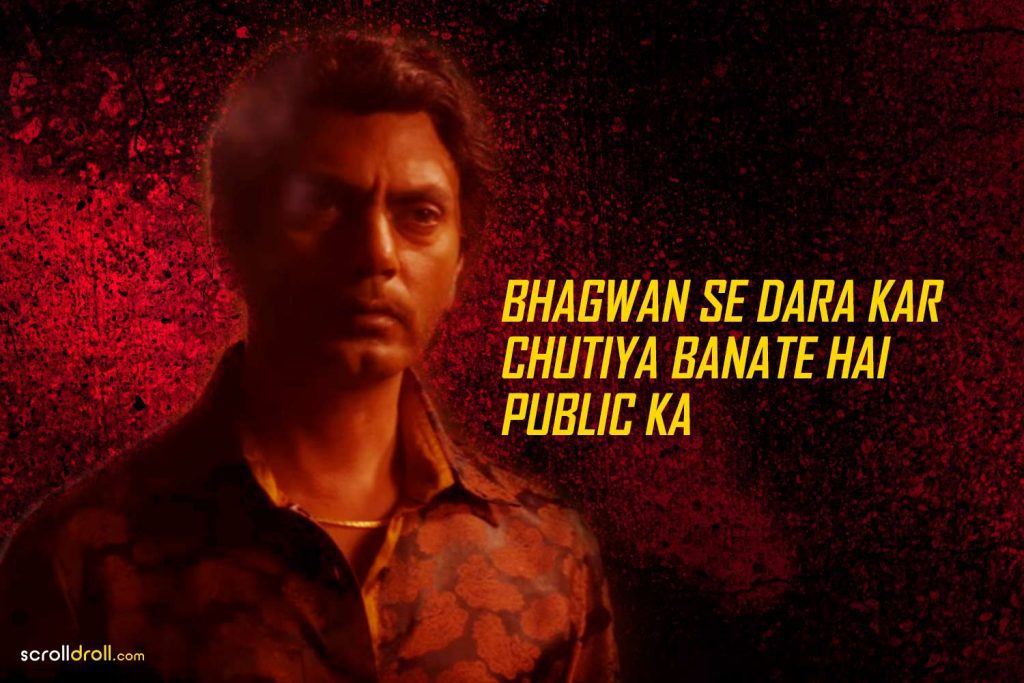 With this dialogue, Gaitonde rightly throws light on how religious beliefs are used to handcuff progress and development in the country. We know that religious India is a soft target for fraudsters and with 33 million Gods in India; people easily maneuver for vested interests.

9. God talks to us in stories. Our lives are a story! 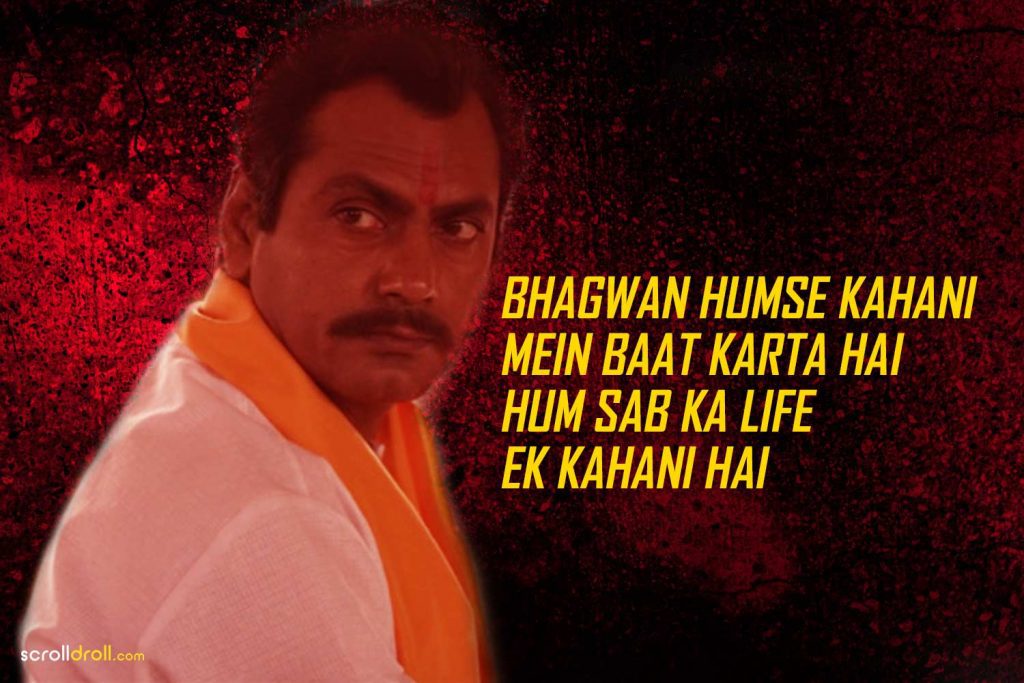 This was a lesson on how we connect with God in our course of life. The intense dialogue tells us that every person is a story and the higher-power talks to us within the life in the story.

10. In the name of money, we became such thick friends as if we were shitting from the same butthole 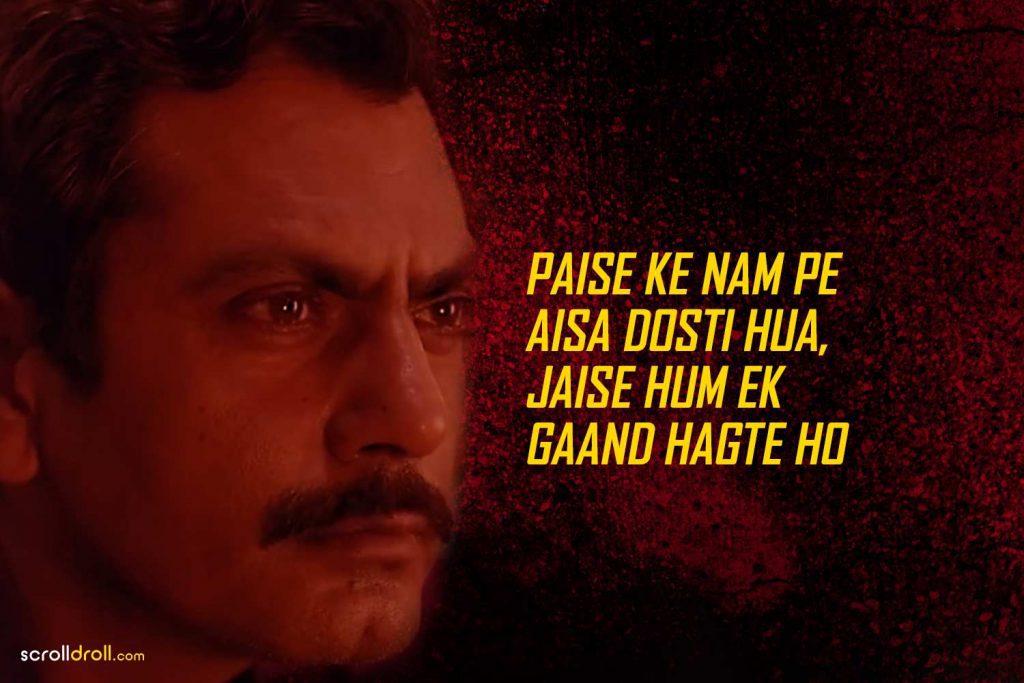 If you have money, you can make anyone dance to your tune. Isn’t that true? We wish it wasn’t but that’s the sad reality. In our own lives or often around us, we see friendships that are solely founded on the basis of money. Once the pocket starts getting empty, so does the friend circle.

11. Poor people are only allowed in the temple for free 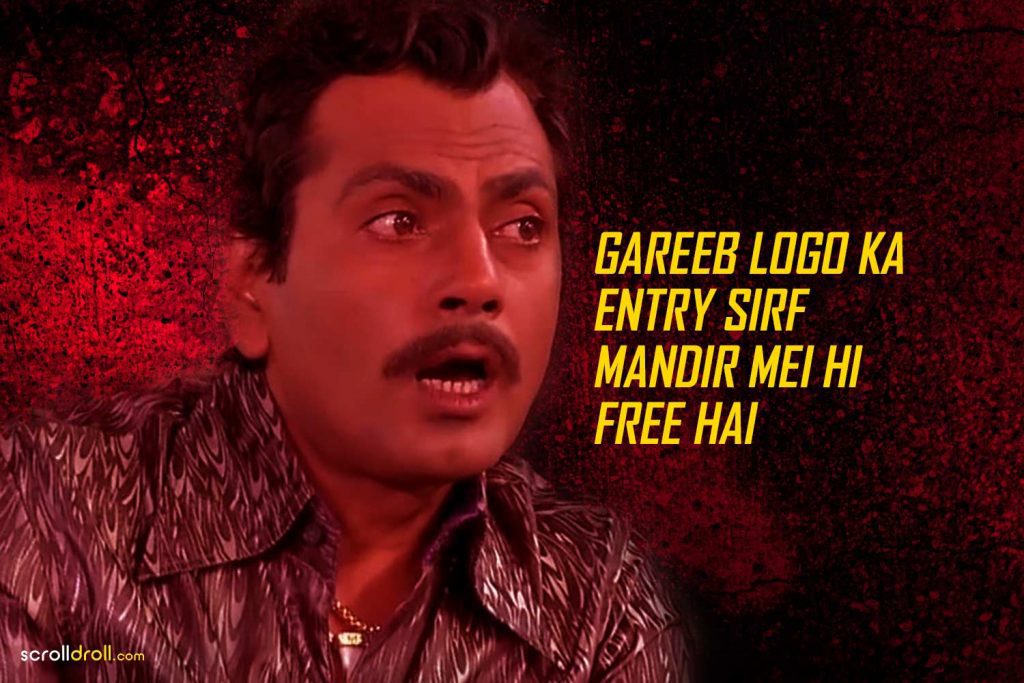 This is the reason why the poor bestow their blind faith on God. There is no need of tip-top clothing or to pay an arm and a leg for entrance, temples welcome the poor with as much grace as they welcome any other strata of people. However, the disturbing fact is that the blind faith is manipulated by powerful people to manifest their intentions.

12. Habit is also an interesting disease, can be formed of anything 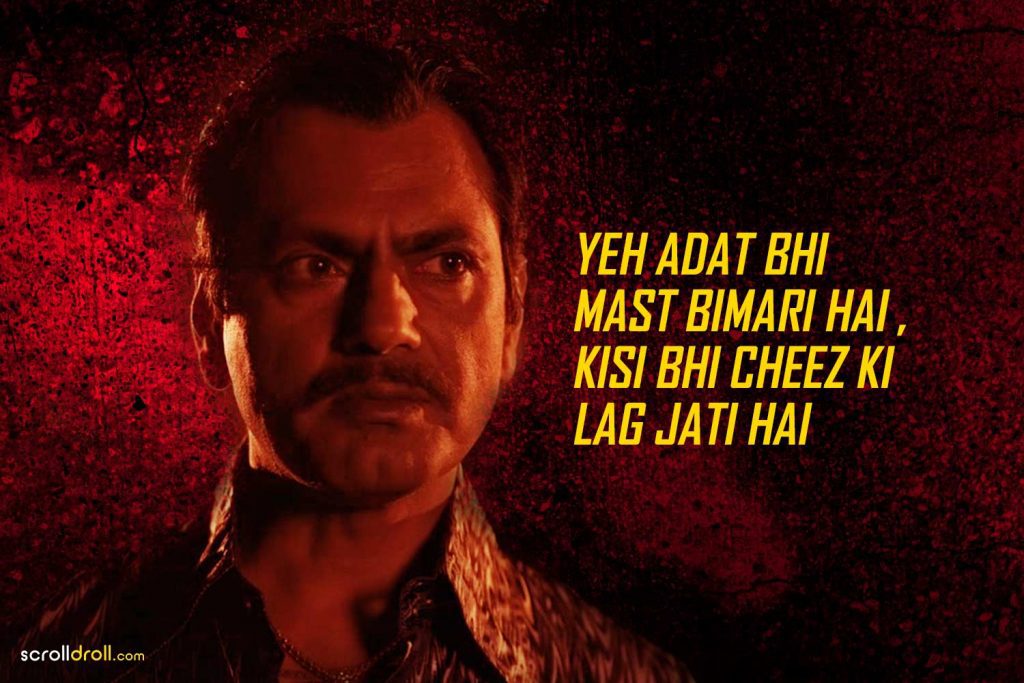 Gaitonde couldn’t get any real than this because people actually develop habits of any kind. There are people who have weird habits like pulling out their eyebrows and drawing random stuff on their legs. So, there is definitely no denial to this one!

Without any doubt, the writers of the series have left no stone unturned to bring to us such a bold cinematic experience. Their unflinching efforts are perfectly clear with Gaitonde’s dialogues in the series. All we hope is that the Indian audience is fed more with such reverberating content that isn’t butchered by Censor Board’s knife. Surely, the series is India’s answer to Narcos!