Warrior, poet, philosopher and the tenth Sikh Guru, Guru Gobind Singh is one of the most revered figures of Indian history and culture. Besides making important contributions to Sikhism and founding the Khalsa, Guru Gobind Singh fought several courageous battles especially against the tyranny of Mughals. Guru Gobind Singh quotes gives an insight into the Khalsa philosphy and the Sikh Guru’s teachings.

Guru Gobind Singh was installed as the tenth Guru of Sikhs at a very tender age of 10 years after his father and the ninth Guru, Tegh Bahadur was brutally tortured and executed by Aurangzeb. The Mughal emperor had also ordered the execution of Guru Gobind Singh. However, the brave Gobind Singh bravely fought several battles in a Dharam Yudh to prevent the persecution of the religious values of himself and his people from the brutal Mughal empire. 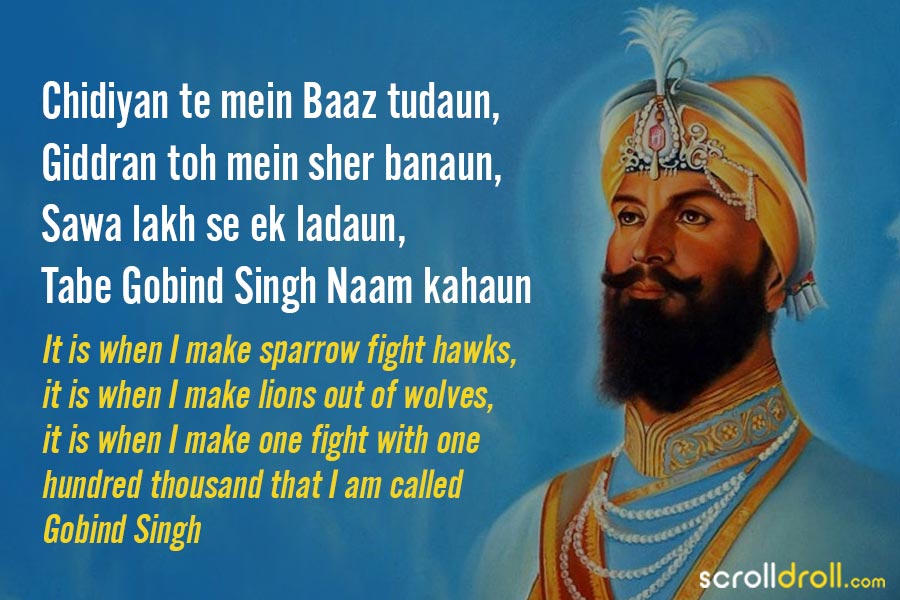 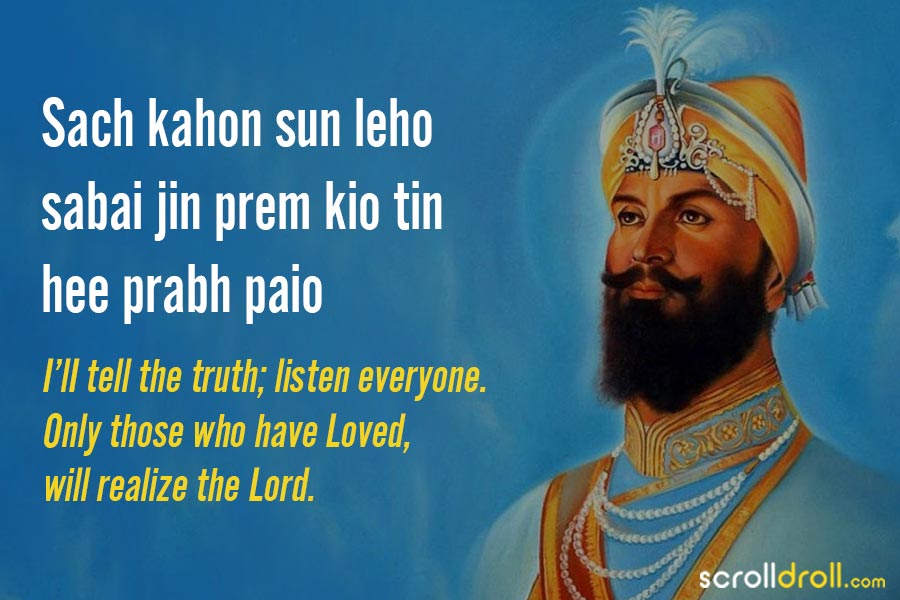 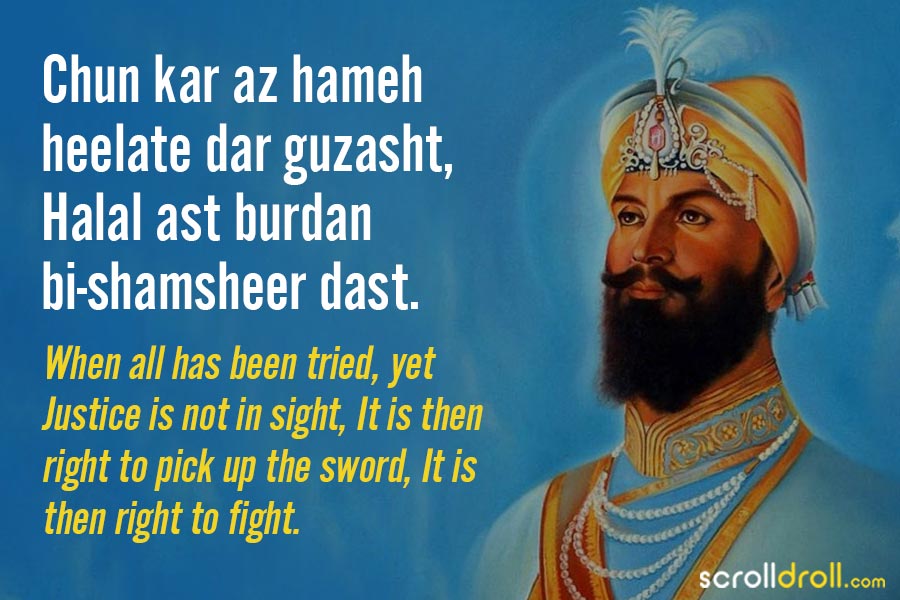 4. Har aan kas ki o rastbaazi kunad Rahim-e bar o rehmsaazi kunad
Those who follow the path of truth in their thought and action, He showers mercies upon them, They are granted his compassion. 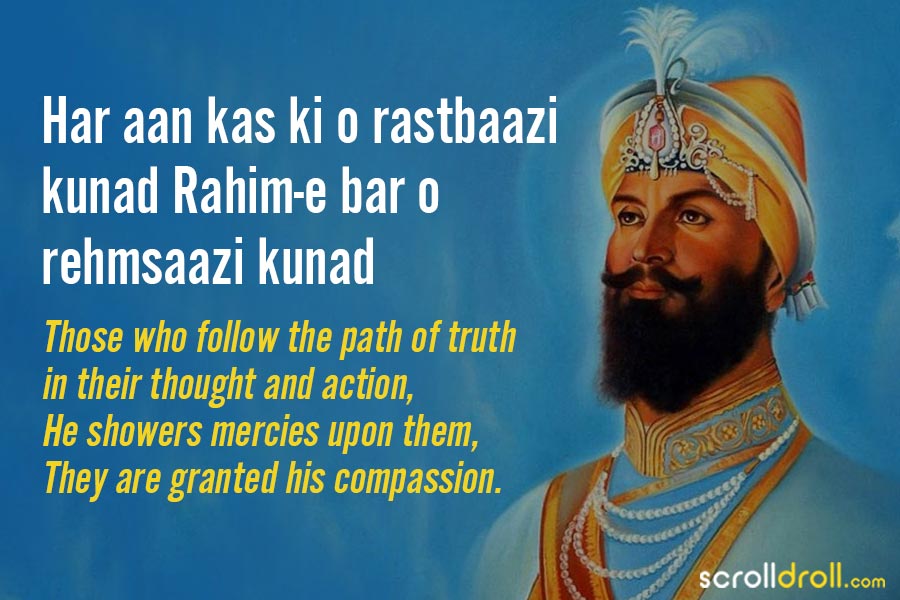 Dear God, grant my request so that I may never deviate from doing good deeds. That, I shall have no fear of the enemy when I go into battle and with determination I will be victorious. That, I may teach my mind to only sing your praises. And when the time comes, I should die fighting heroically on the field of battle 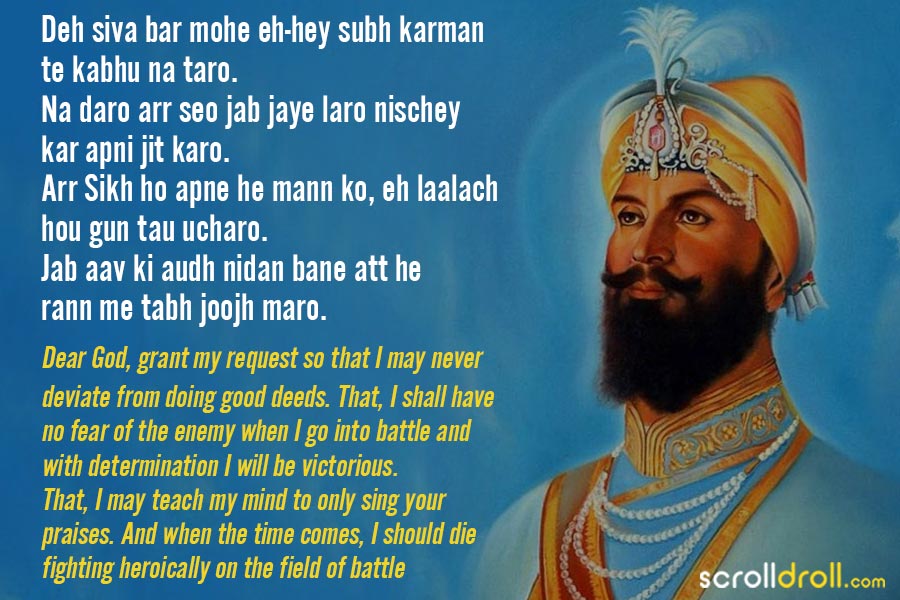 6. He alone is a man who keeps his word: Not that he has one thing in the heart, and another on the tongue. 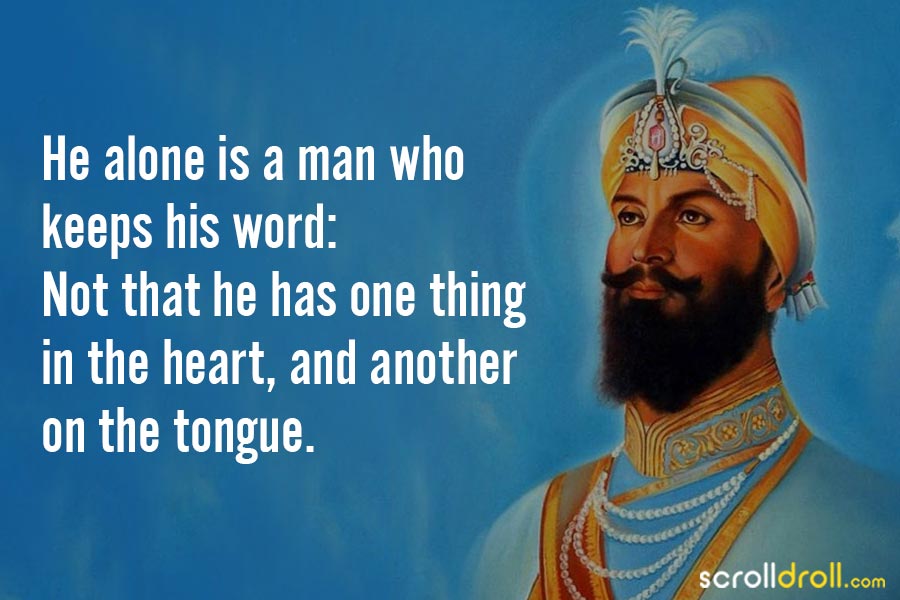 7. The greatest comforts and lasting peace are obtained, when one eradicates selfishness from within. 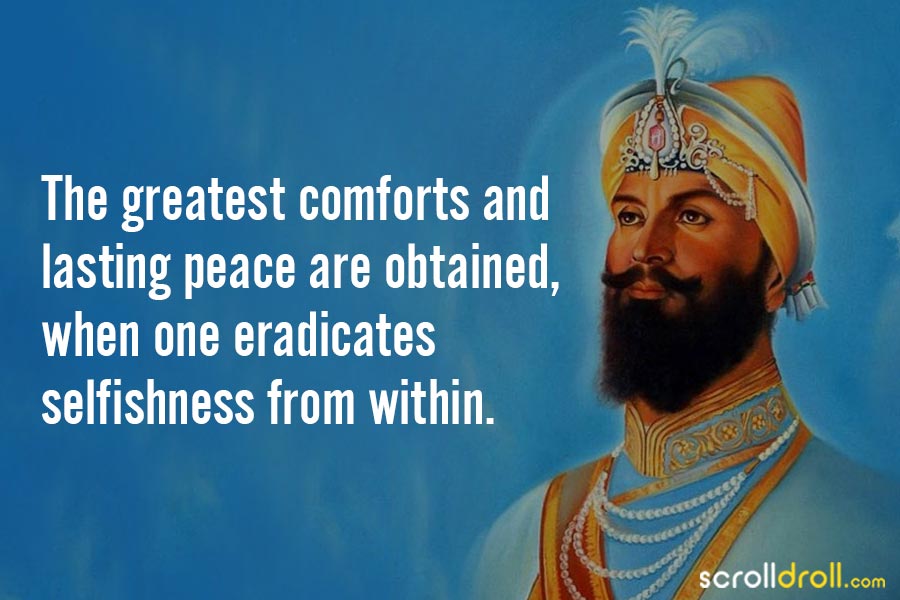 8. If you are strong, torture not the weak, and thus lay not the axe to thy empire. 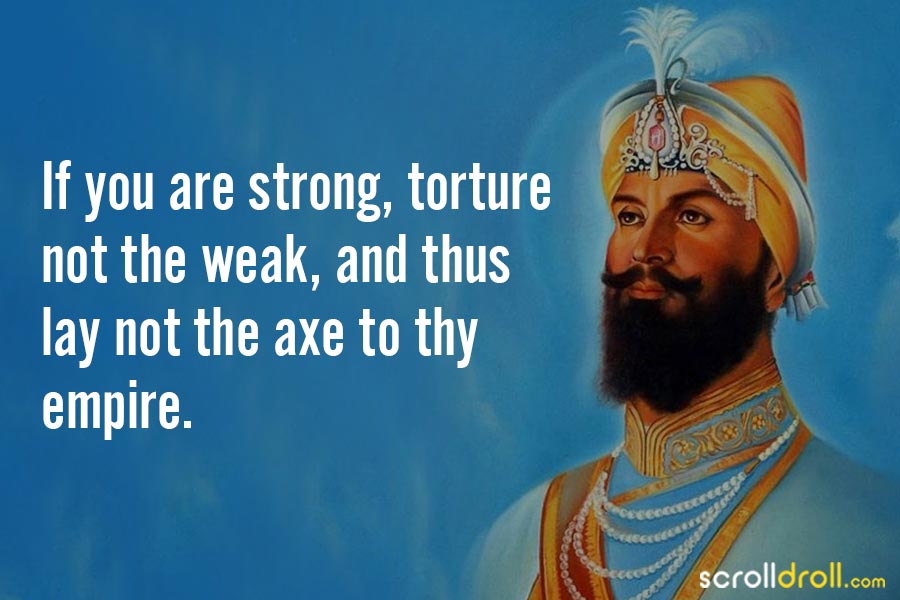 9. Shed not recklessly the blood of another with thy sword, lest the Sword on High falls upon thy neck. 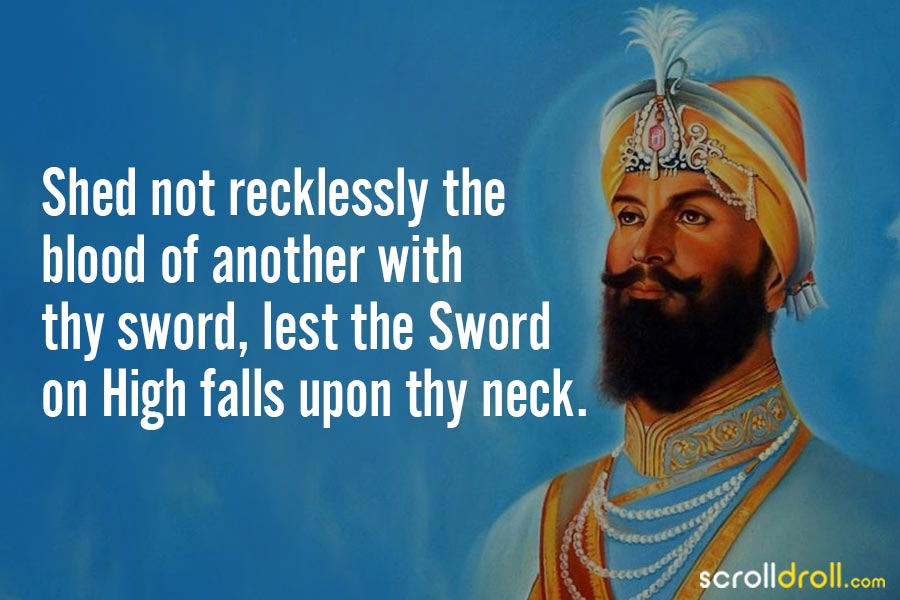 10. The ignorant person is totally blind. They do not appreciate the value of the jewel. 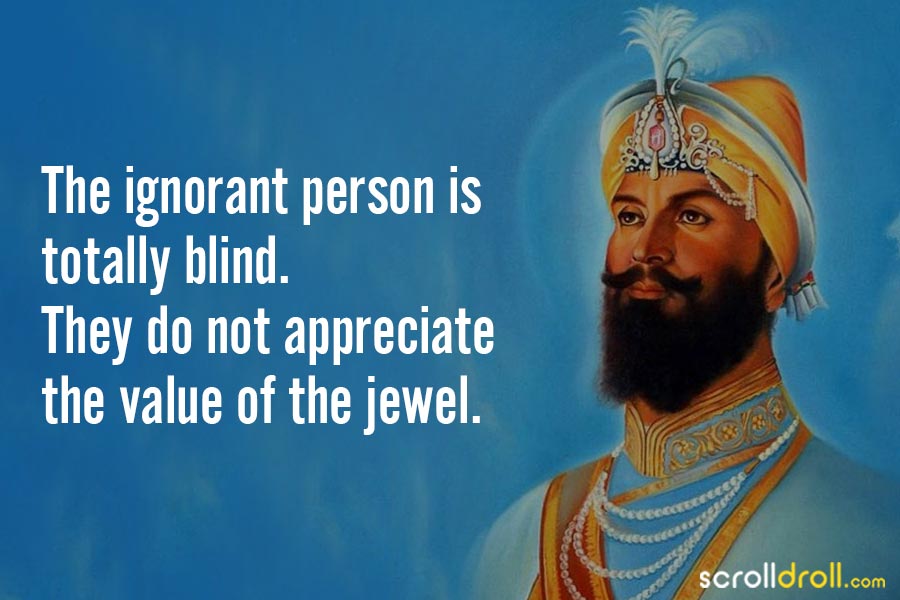 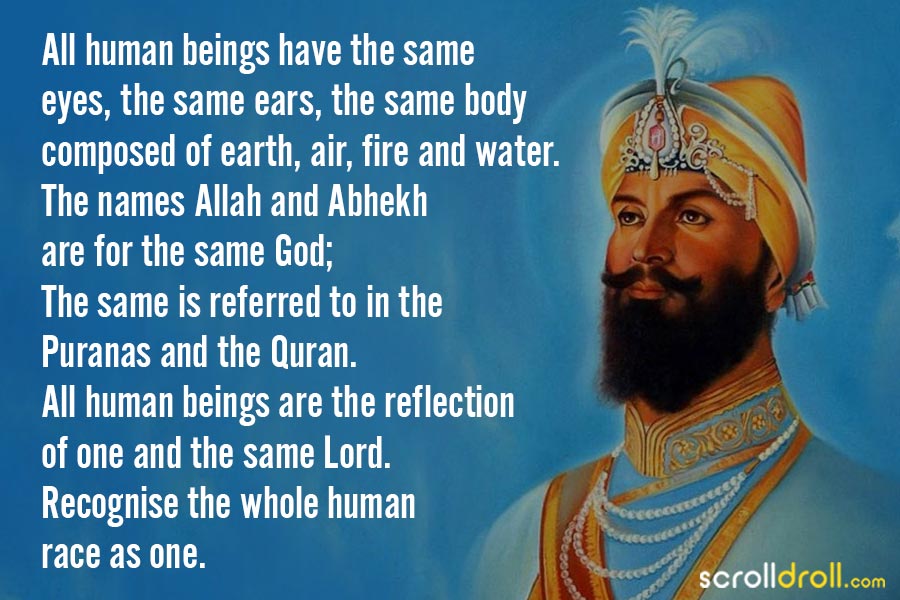 12. It is of no avail to sit closing both eyes and meditating like a crane. This world is lost, and the next also, for those who go about bathing in the seas, desiring salvation. They pass their lives In vain dwelling in the midst of sin. I speak verily; hear me all – God is realised only through love.

Guru Gobind Singh lost all his four sons in his war against the Mughals and was himself killed by an assassin. His story, struggle, sacrifices, teachings and Guru Gobind quotes continue to inspire millions of Indians to fight religious fundamentalism and tyranny to protect their beliefs.

Which of these Guru Gobind Singh quotes did you find the most powerful?