Valour, Glory, Sacrifice & Duty – The Indian Army is an epitome of the highest values that India as a country stands for. From the icy landscapes of Siachen to the arid deserts of Rajasthan, the Indian Army acts as a shield for over a billion lives in our country keeping us safe from all external threats that continue to  haunt our borders. Over the years, the exemplary dedication and sacrifice of our Armed forces have been captured in powerful Indian Army quotes.

Also Read: 18 Sam Manekshaw Quotes That Show He Was Simply A Badass

We bring you some of the best Indian Army quotes about valor, strength, sacrifice and duty.

1. “If a man says he is not afraid of dying, he is either lying or he is a Gorkha.” – Sam Manekshaw 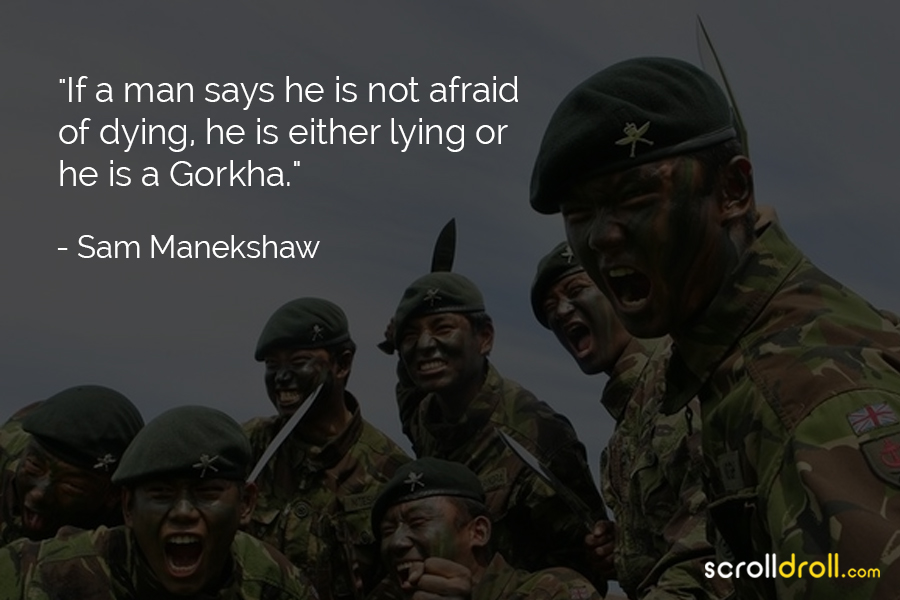 2. “If death strikes before I prove my blood, I promise, I will kill death.” –  Captain Manoj Pandey (Param Vir Chakra) 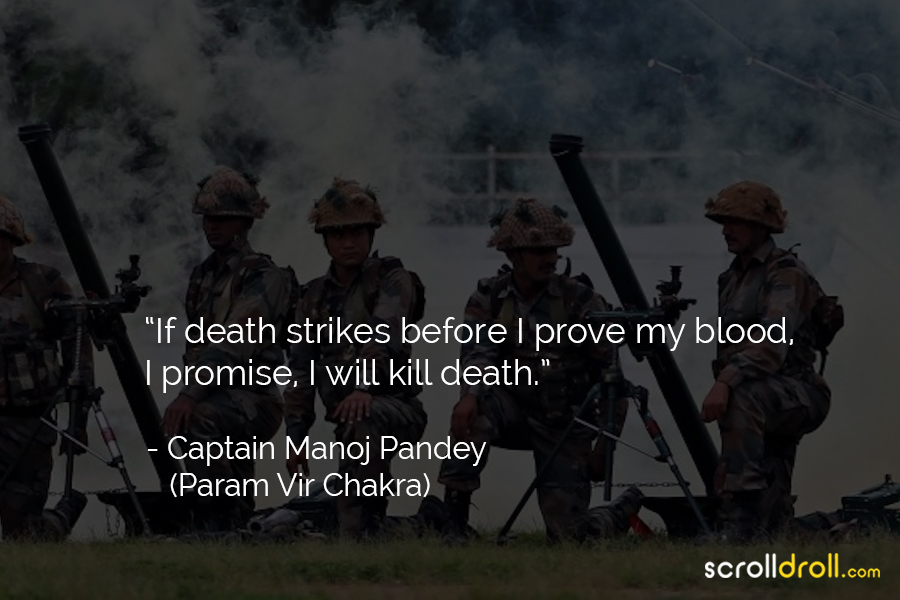 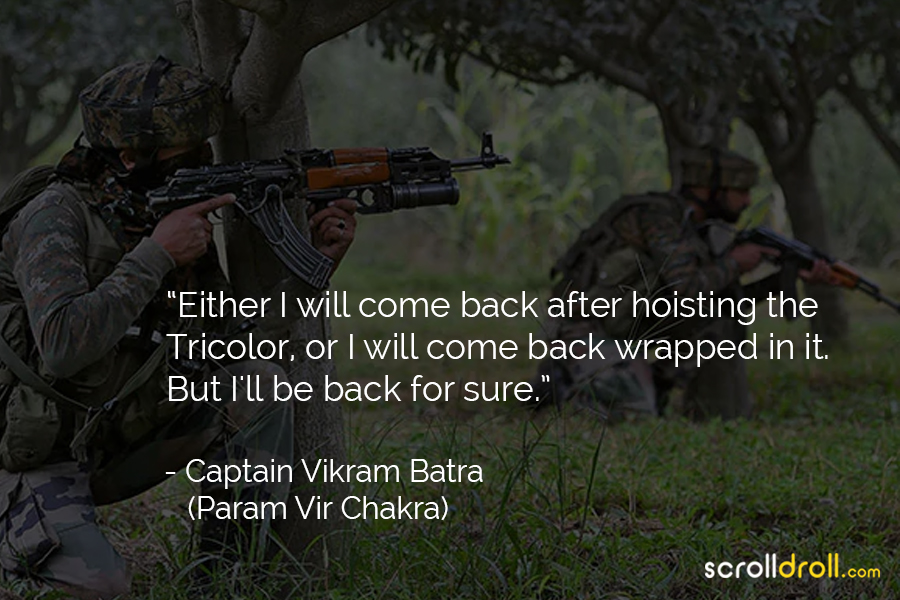 4. “No, Sir! I will not abandon my tank. My main gun is still working and I will get these bastards.” – Second Lieutenant Arun Khetarpal, (Param Vir Chakra) 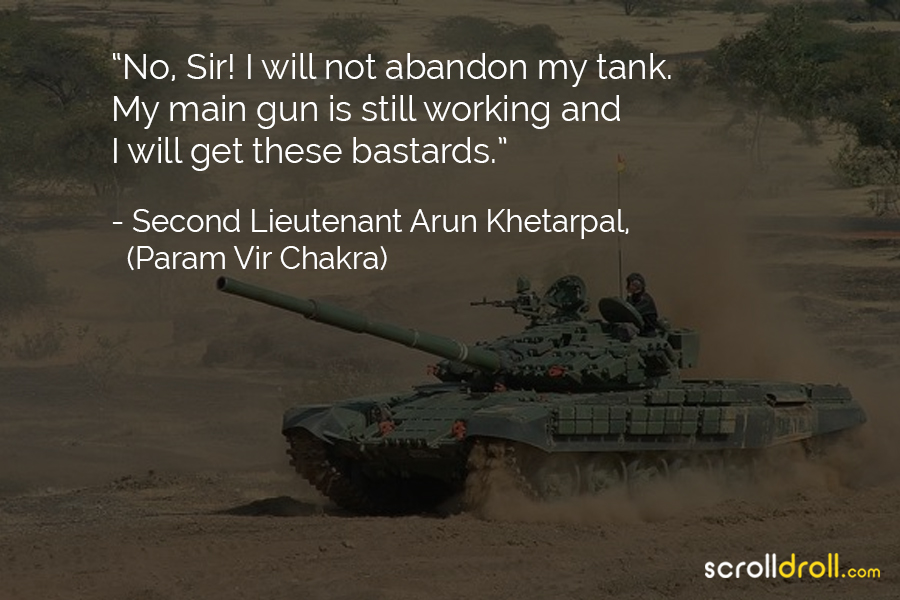 5. “What is a lifetime adventure for you is a daily routine for us.” 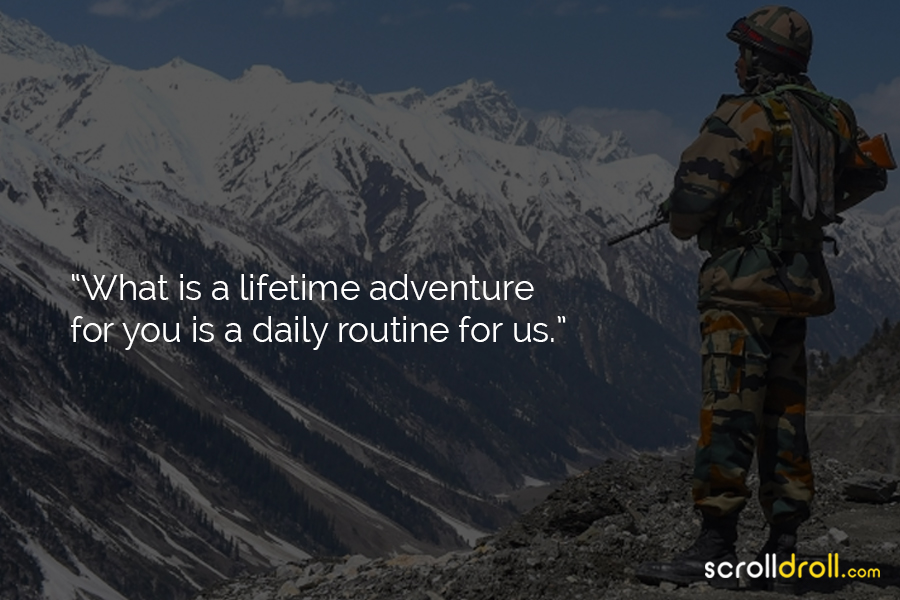 6. “Our flag does not fly because the wind moves it, it flies with the last breath of each soldier who died protecting it.” 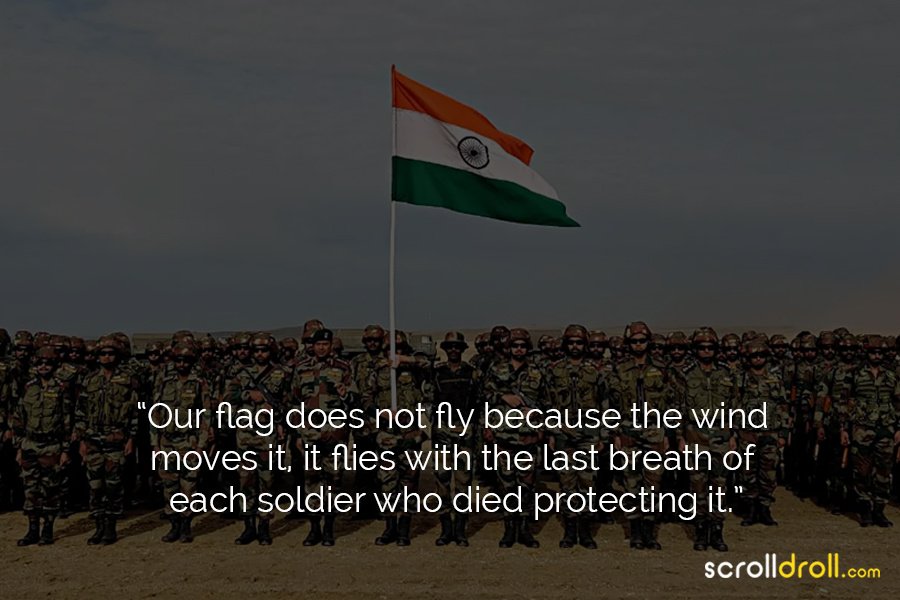 7. “We live by chance, we love by choice, we kill by profession.” 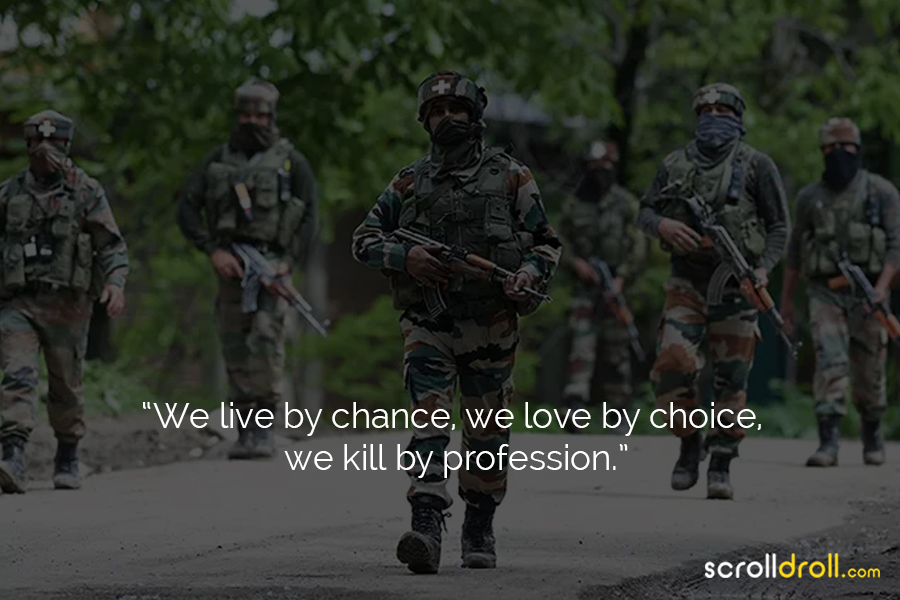 8. “It is God’s duty to forgive the enemies, but it’s our duty to convene a meeting between the two.” 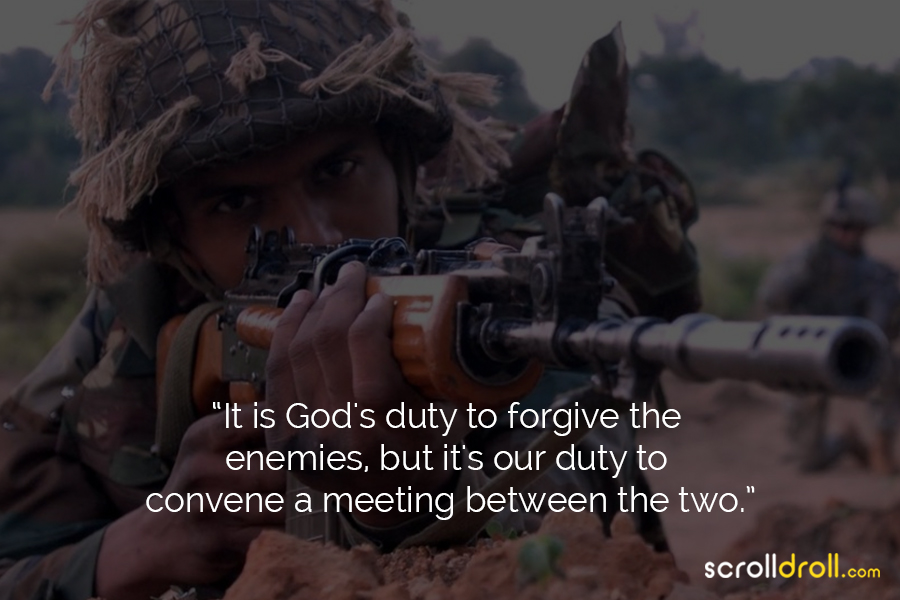 9. “The enemies are only 50 yards from us. We are heavily outnumbered. We are under devastating fire. I shall not withdraw an inch but will fight to our last man and our last round.” – Major Somanth Sharma (Param Vir Chakra) 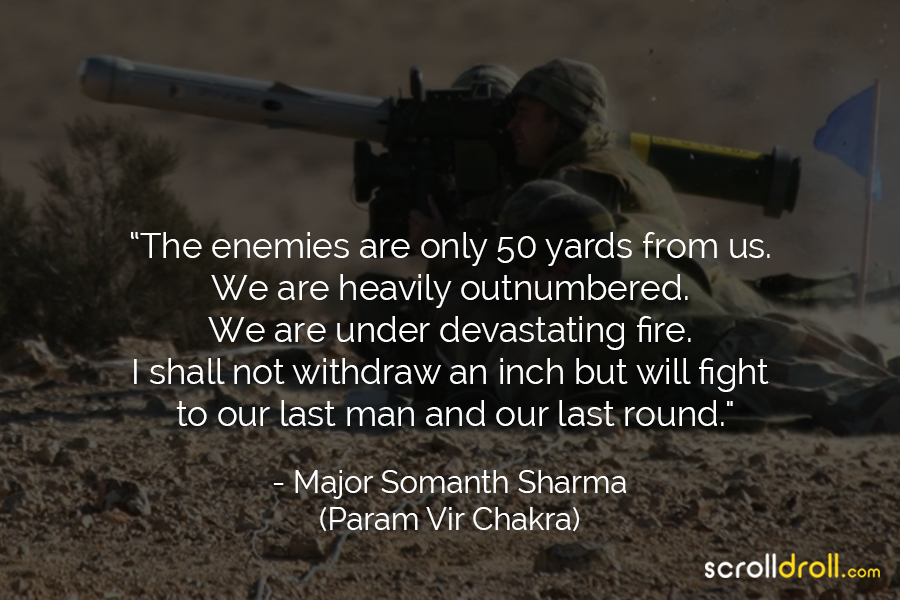 10.“Sleep peacefully at your homes. Indian Army is guarding the frontiers.” 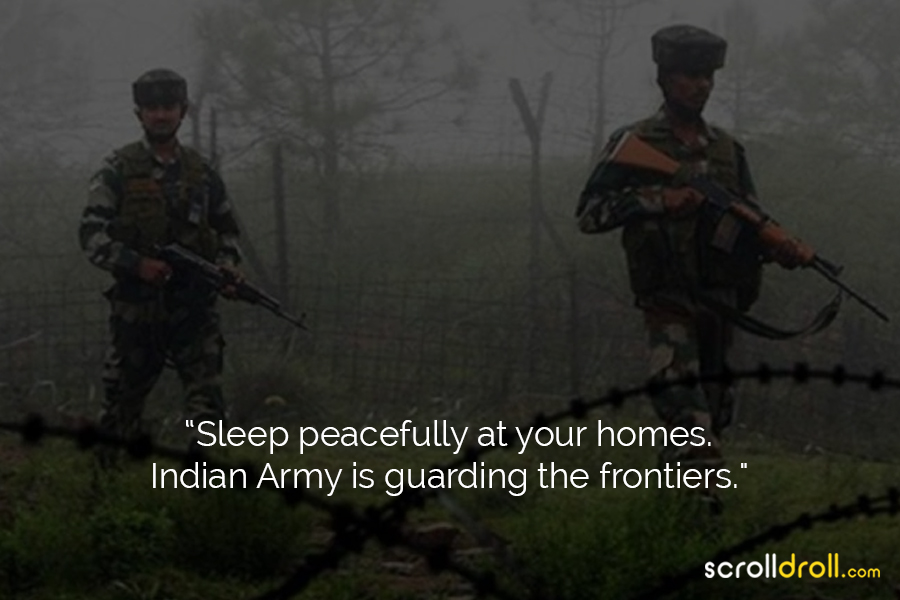 11. “Gentlemen, I have arrived and there will be no withdrawal without written orders and these orders shall never be issued.” – Sam Manekshaw 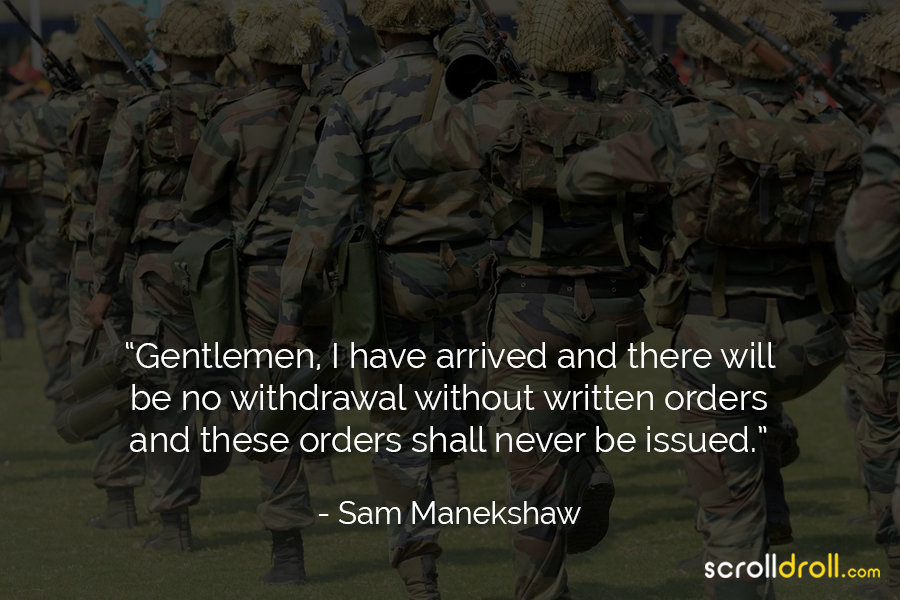 12. “Only the best of friends and the worst of enemies visit us.” 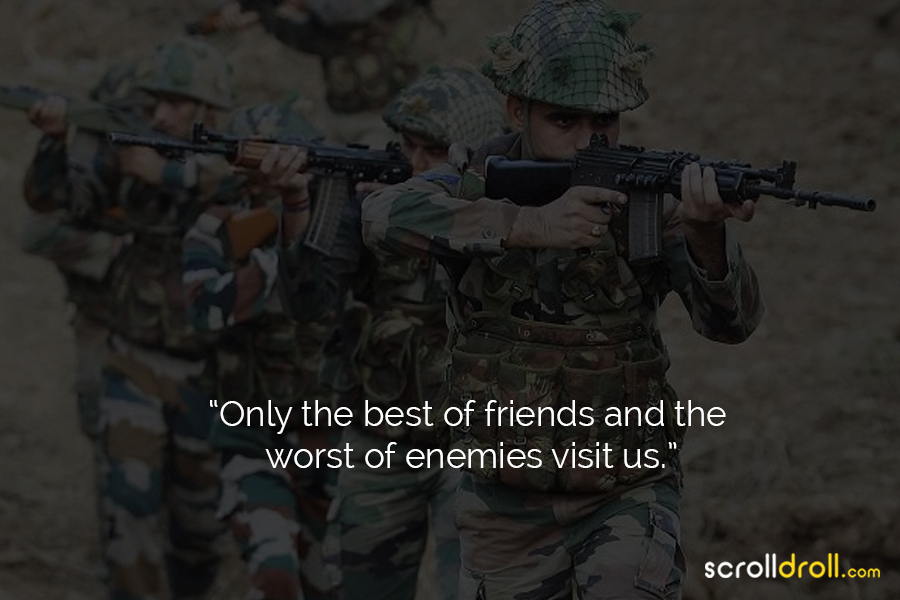 13. “I regret I have but one life to give for my country.” – Prem Ramchandani 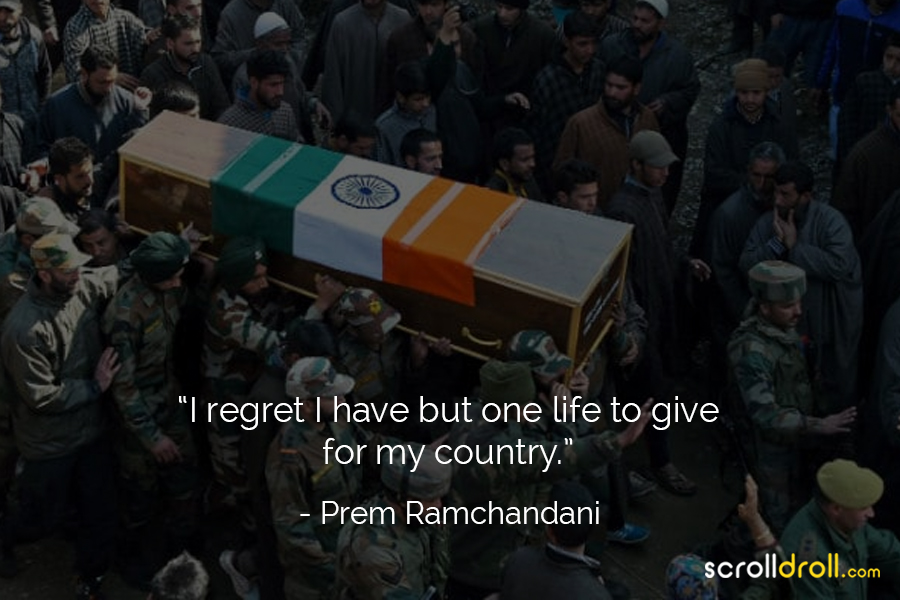 14. “Quartered in snow, silent to remain. When the bugle calls, they shall rise and march again.” – – Scroll of honor at Siachen 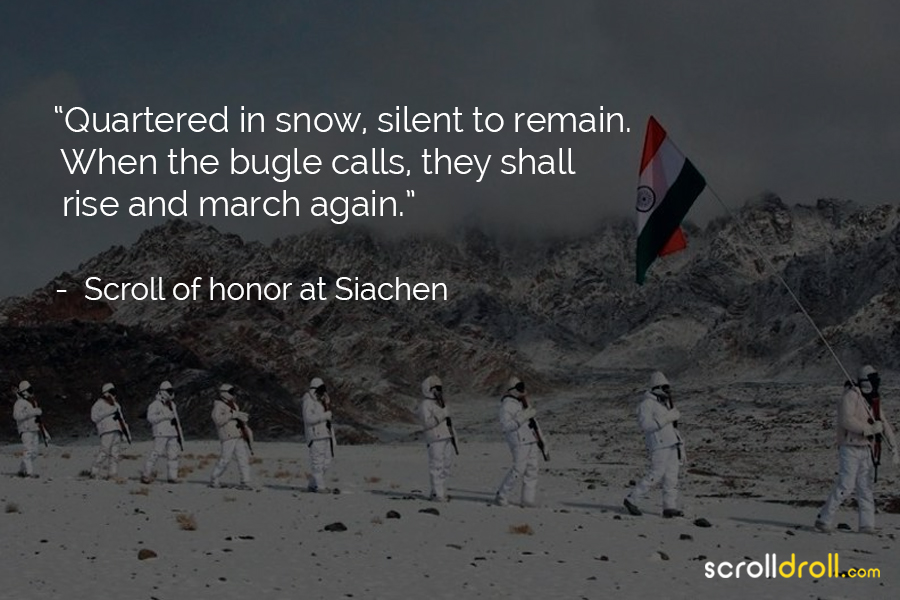 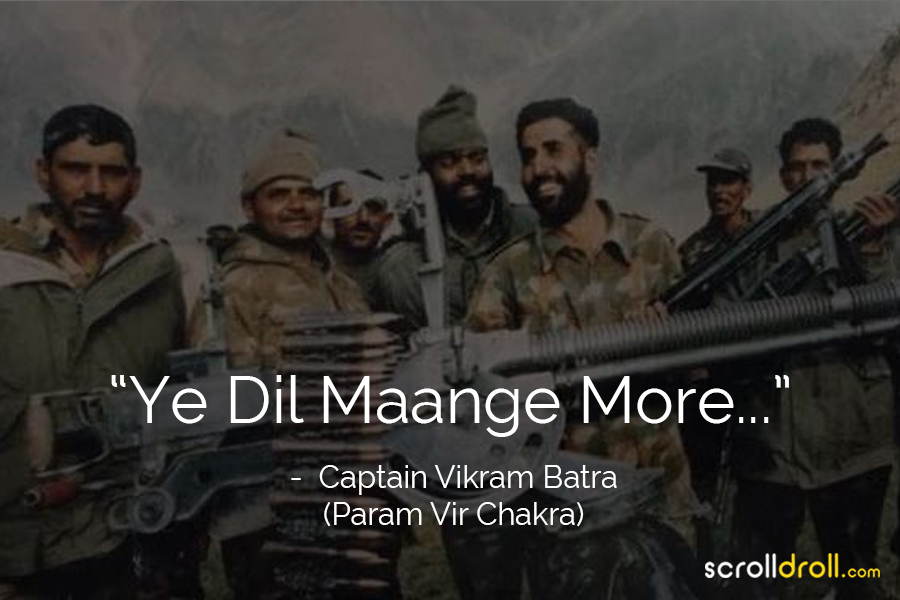 16. “I wont die in an accident or die of any disease. I will go down in glory.” – Major Sudhir Kumar Walia (Ashoka Chakra) 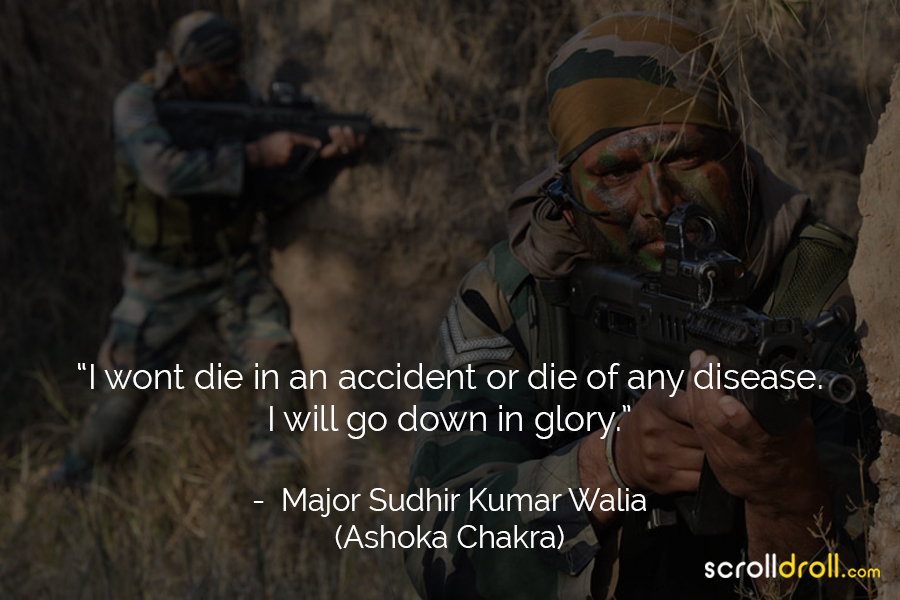 The whole country bows to the supreme struggles and sacrifices of our Armed Forces over the decades. Their stories, courage and sacrifice for the country is an inspiration to millions of Indians who want to work for the prosperity of our nation and take it to greater heights with each passing day.