India’s image as a land of vegetarians and snake-charmers is a thing of the past. Indians have proven themselves to be worthy in every field – from the sciences to the arts, and way beyond that. Is it. then any surprise that Indians held 80 of the records in the Guinness World Records in 2020? From the longest protest march to the tallest statue, India has housed them all. On that note, take a look at these 20 Indians with interesting Guinness Book records that are sure to amaze you – ranging from the weird to the gallant.

Also read: 30 Embarrassing Cricket Records You May Have Little Idea About!

Ramkumar Sarangpani has a record of making and breaking records. A numismatist by profession, the man has records of having made the largest pair of earrings, the longest chain of magnets, the largest business card, the largest licence plate, the smallest playing cards – the list really goes on, with a total of 18 records till date. 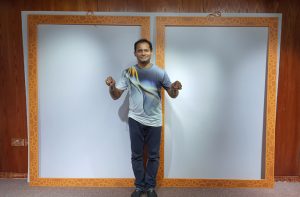 In 2011, Kalamandalam Hemalatha, a Mohiniattam dancer, set a record for the longest dance marathon. She danced for 5 DAYS  at a stretch, 123 hours and 15 minutes to be exact, claiming the title of “dancing queen of Kerala” for herself with grace. 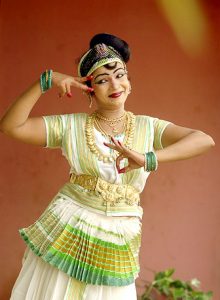 Jyoti K Amge is known to be the shortest living woman in the world. She is an actress, with a height of 62.8 centimetres at the age of eighteen when she was declared to have set the record. Her unusual height is due to a condition called primordial dwarfism. In 2010, Singh made the record of wearing the largest turban in the world with 400 metres of cloth. The turban is hed up using more than 100 hairpins and has 50 religious symbols made of metal attached. The turban weighs around 30 kilograms.

Bollywood lyricist Sameer Anjaan, in 2015, received recognition for being the most prolific Bollywood lyricist ever, having written a staggering number of 3,524 songs. He is also known to be one of the most popular lyricists in the industry, with his work holding up well in terms of lyrical and musical value. 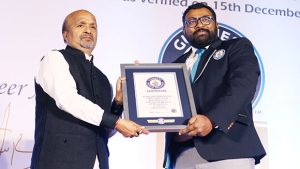 In 2018, an Odiya youth named Manoj Kumar Maharana broke three Guinness World Records consecutively. He achieved this feat by – putting 533 straws in his mouth and keeping it the same way for thirty seconds, without any use of his hands. Next, he held 40 lit candles in his mouth for 40 seconds straight, and then held a 6.5 centimetres long toothpick in his mouth, rotating it through his tongue 32 times in a minute! Talk about unusual stuff. To put things into context, Maharana also has a Master’s degree in Mathematics. 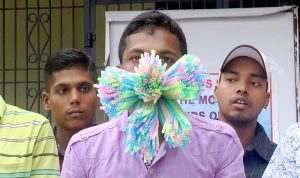 A computer operator working in Jawaharlal Nehru University, Chaudhary holds 9 Guinness records for his extraordinary typing skills. From being the fastest person to type with his nose – 103 characters in under 47 seconds, the fastest to type blindfolded – all alphabets in 6.71 seconds AND the fastest to type with a mouth stick – all alphabets in 16.85 seconds, he has broken all those records. The Sociology graduate runs a computer centre for poor and disabled students. 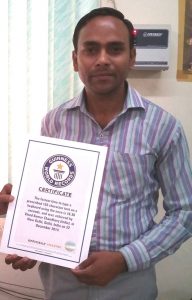 Ram Singh Chauhan from Rajasthan has set the record for having the longest moustache in the world, amounting to 14 feet in length as of 2010. At the time, he had been growing his moustache for thirty years. 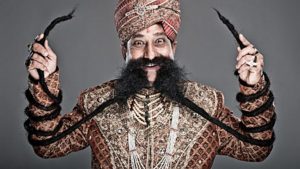 In 2012, she set a world record for the farthest distance limbo skating under cars. Deshpande skated under 27 cars, covering a distance of 48.2 metres. Hailing from Kolhapur in Maharashtra, she was a kindergartener when she achieved this feat. 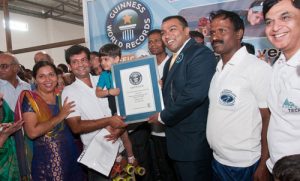 The most wholesome way to set a record – give out hugs. Jayasimha Ravirala, in 2012, did exactly that by giving 2436 hugs in an hour at the Aditya Institute of Technology and Management in Andhra Pradesh. 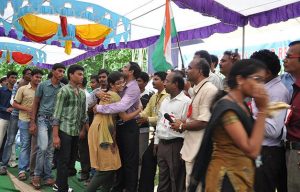 Creating a record for the largest nail sculpture in the world must have been no easy task. Hailing from Indore, Wajid of Wajid Art created a sculpture using nails, a sculpture that was 1.8 metres wide, 1.9 metres long and 0.07 metres tall. It depicts a symbol of peace. 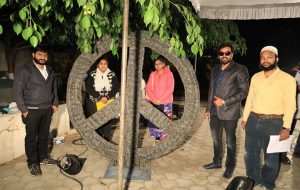 The duo of brothers set a record by making a fully functional TV remote that was 14 feet long. Thus credited for having created the world’s largest television remote control, the brothers’ efforts were acknowledged by the Guinness Book of World Records. They spent 68 days working on it, and even sold off their motorcycle to gather funds to build it. The gigantic remote worked perfectly on a regular-sized television. 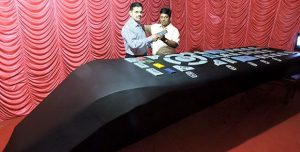 A jeweller based in Uttar Pradesh, Bansal set the record for having made a ring with the most diamonds set in it. The Meerut-based founder of Renani Jewels, broke the record by designing a ring with 12,638 diamonds in 2020. An expert in martial arts, Prabhakar Reddy set the record for smashing the most watermelons by roundhouse kick! He smashed 30 watermelons in a minute this way on 31 March 2019. He previously held the record of having crushed the most number of walnuts by hand in a minute, in 2017. Rao, from Andhra Pradesh, was recognised for having the made largest individual laddu in the world. In 2016, they created a sweet weighing 29,465 kilograms and achieved this feat. 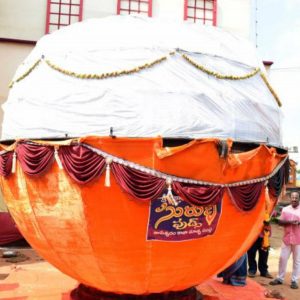 So, these were the 20 Indians with extremely unusual and interesting Guinness book records.