As one of the largest companies in the world, Apple is the pioneer of modern technology. It is because of Apple that we have the convenience of having the world at our fingertips. Founded in 1976, Apple is 45 years old this year. With so much company experience under its belt, it is no wonder that there are many things about Apple Inc that’ll surprise you. Here are some interesting facts about Apple Inc we bet you didn’t know!

Also read: 20 Interesting Facts That Prove That Bill Gates Is Just One Of His Kind!

Let’s get back to our list of 20 interesting facts about Apple Inc!

1. Apple Inc’s market cap is bigger than the GDP of 25 countries in the world.

The revenue generated by Apple is more than the GDP Ecuador, Libya, Iraq & many other countries. 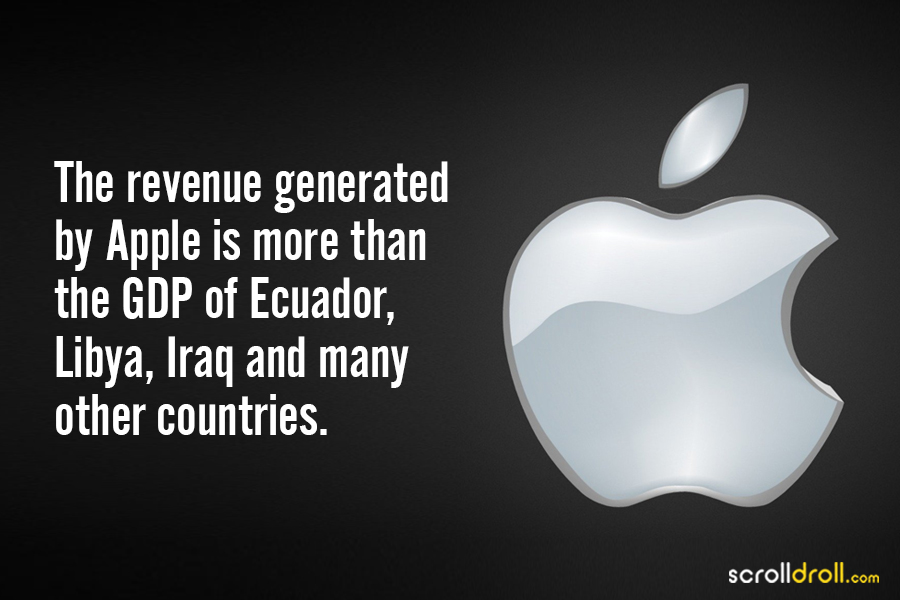 With business booming more than ever, it is no wonder that Apple was hiring over 140,000 people in 2020. 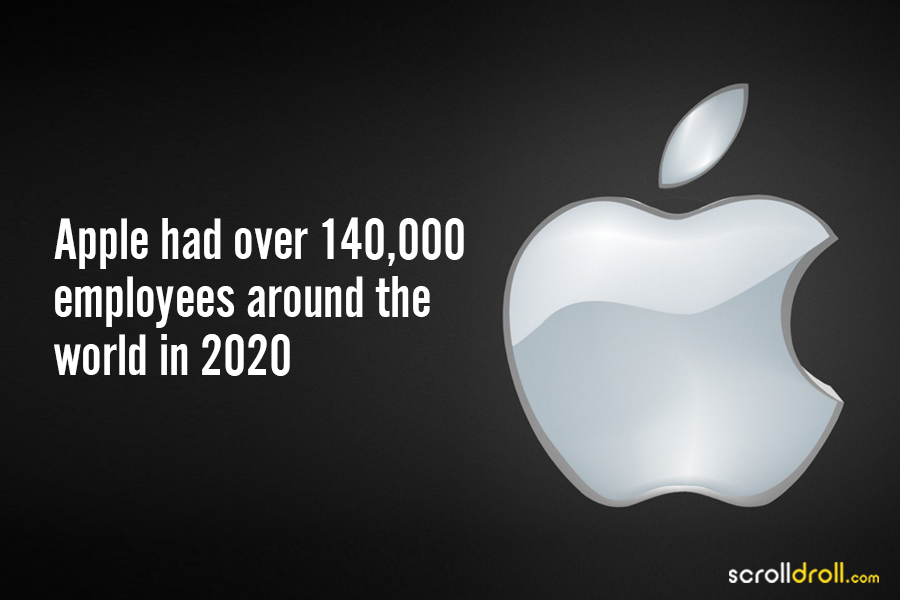 Throughout the late 2000s and early 2010s, Apple hardly had any competition when it came to smartphones. With no other option being close to the sophisticated UI of the iPhone, Apple was selling its smartphones like hot cakes. However, the presence of Android is hardly felt even now in the US market and many western countries, where people use Apple because Android doesn’t get much attention there. 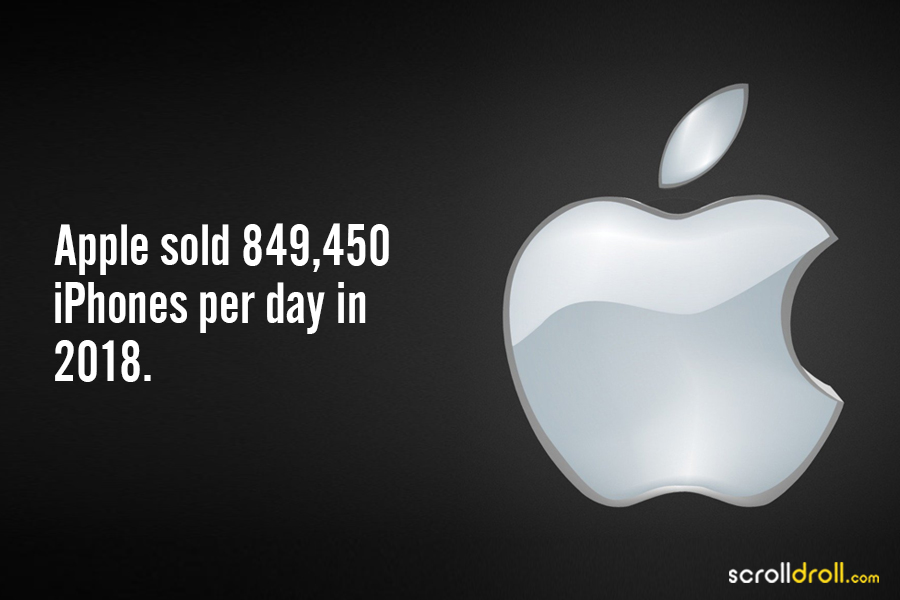 Time is money, but especially if you’re rich. 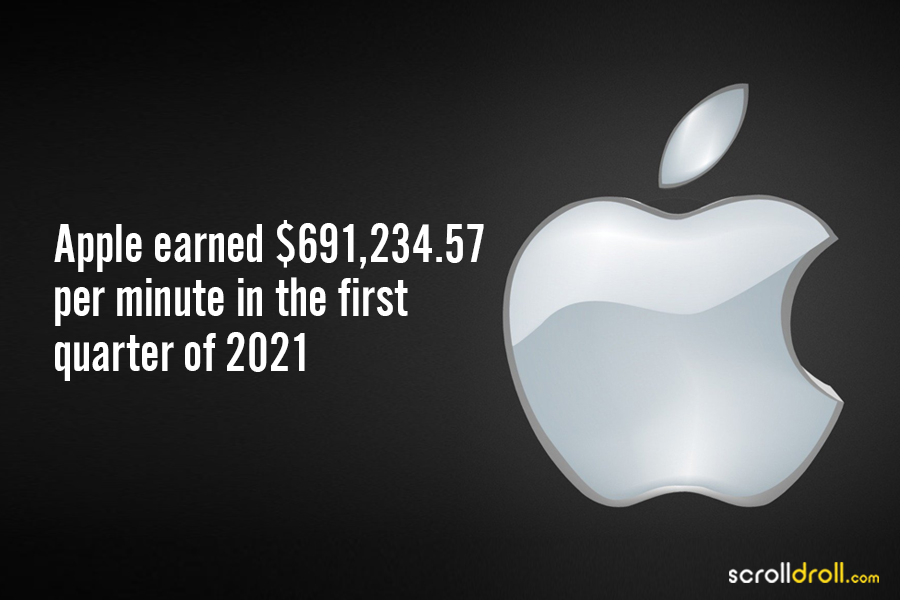 5. The first Apple logo, drawn by Ronald Wayne (the third co-founder of the brand), depicted Isaac Newton under an apple tree.

However, Wayne soon left the company, and the logo became the iconic half-eaten Apple we’re used to seeing now. When asked why the apple was half eaten, the designer, Rob Janoff said that he did it for scale – so the logo would be easily distinguishable from a cherry. 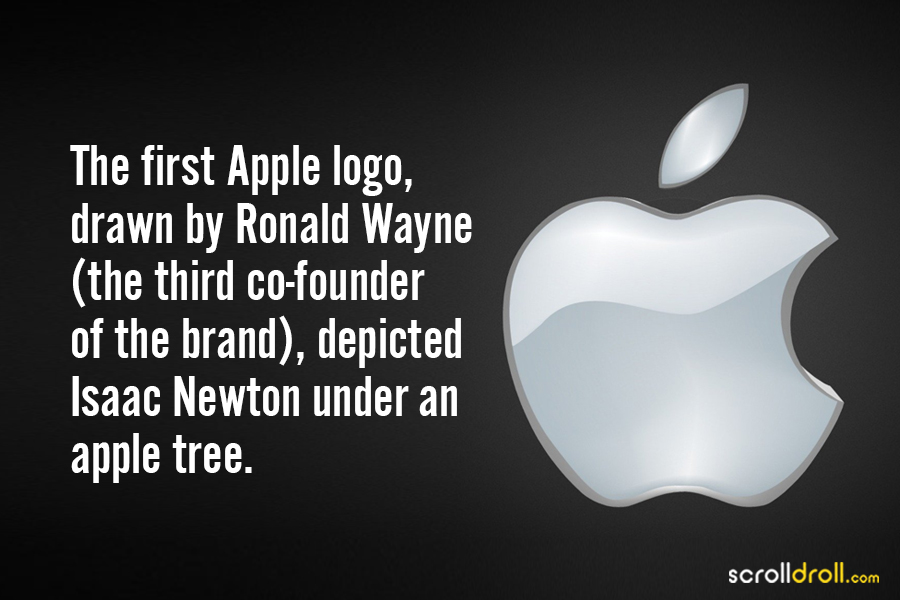 You can check it for yourself if you want to. I did too. 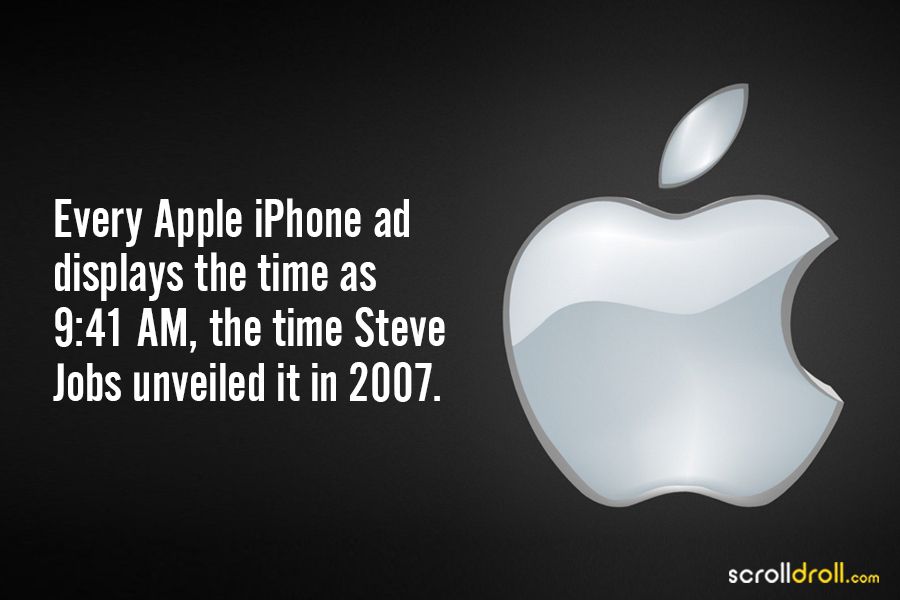 When it comes to brand perception, people tend to consider Apple’s tech as the most sophisticated in the market. 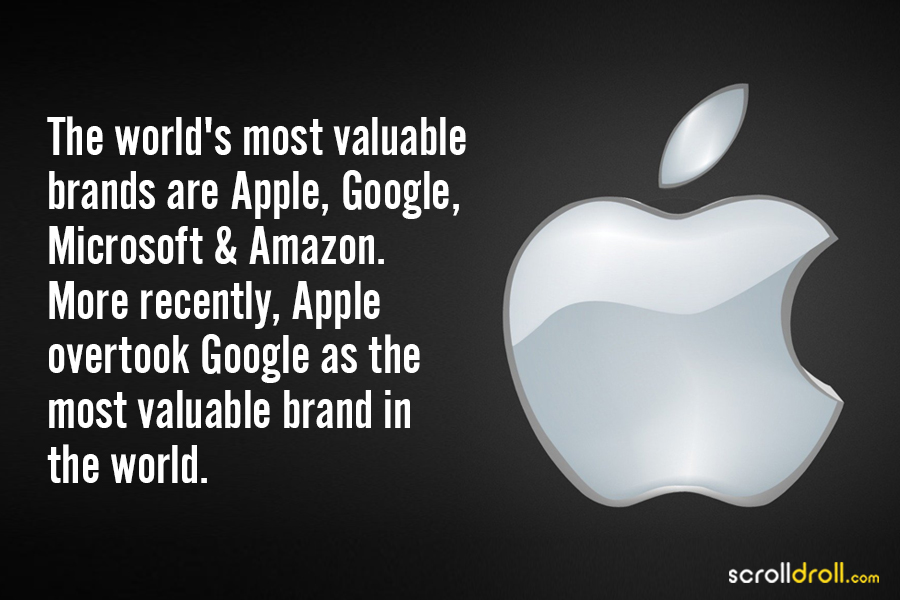 It now has a market value of around 2500 billion dollars. 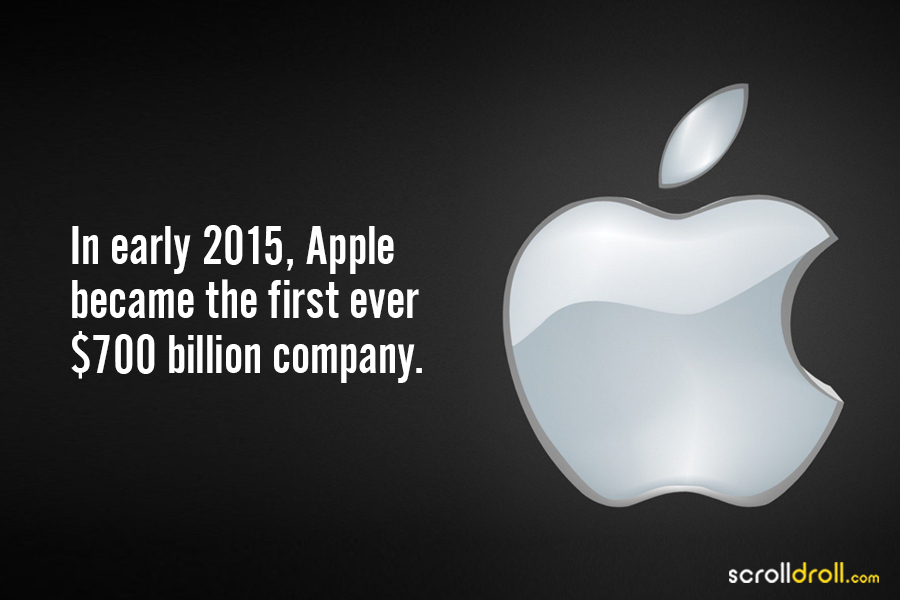 9. The creator of the iPod first offered the idea to Philips and RealNetworks, but they failed to see its potential.

Not everyone has the eyes to see greatness. 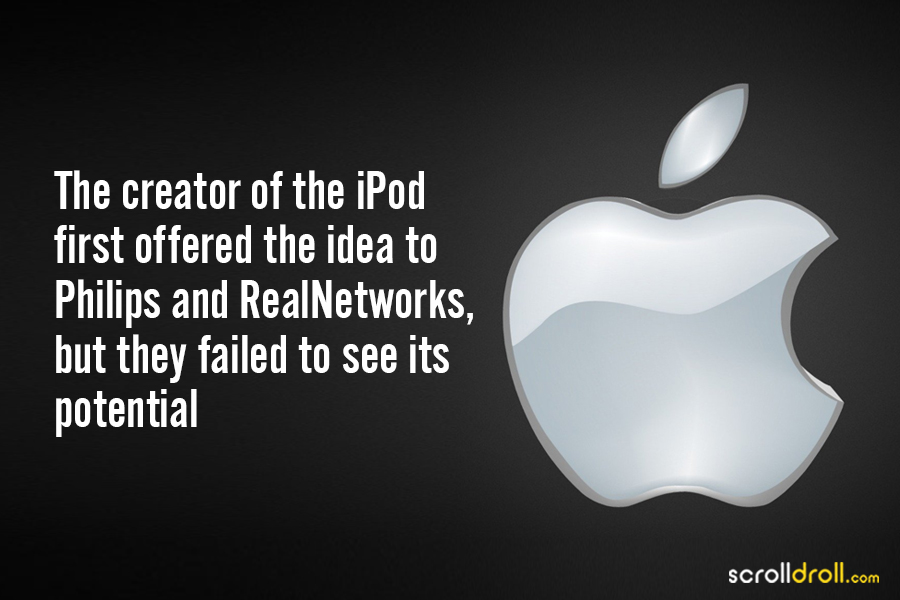 10. Apple iPad’s retina display is actually manufactured by Samsung. Samsung makes about 30% of the A8 chips that go into Apple’s iPhone 6

However, Apple has been trying to lessen its dependence on Samsung in recent years. 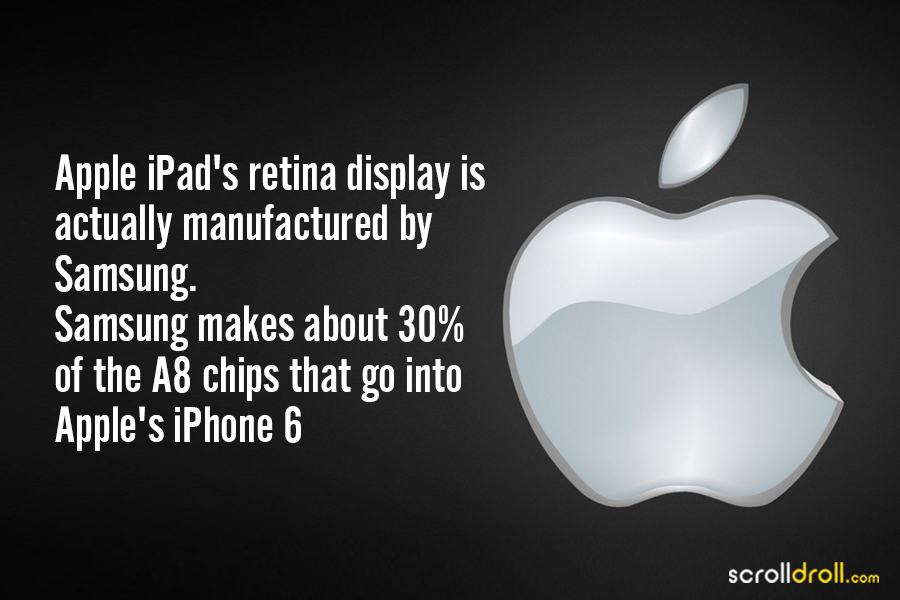 11. China is currently Apple’s second biggest market, trailing only the United States. Revenue in China grew to nearly $17 billion in the second quarter of 2015.

In fact, Apple’s popularity in China has soared so much in recent years that several dupe shops have opened and shut. Some of them were so impressively sneaky that even employees didn’t know that the store was a dupe. 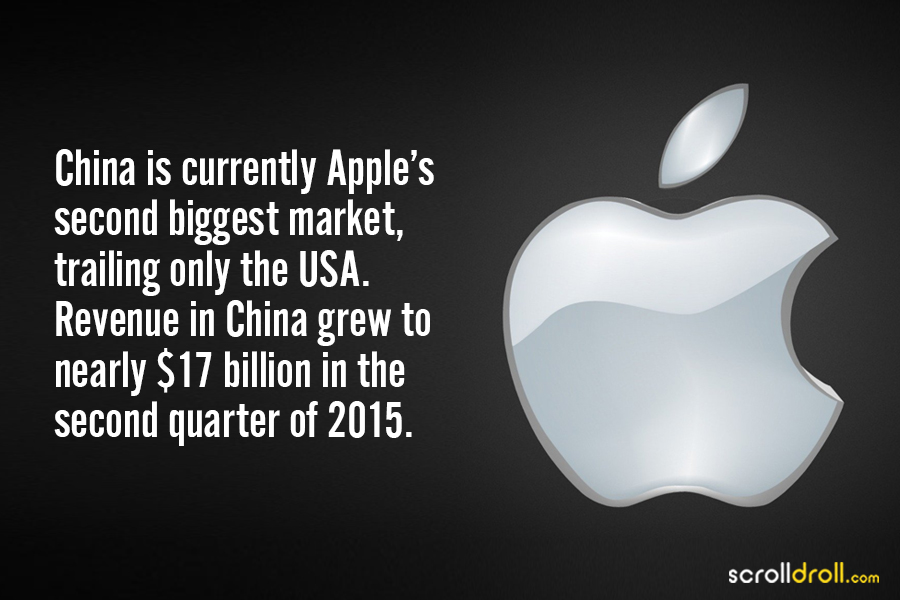 12. In the first quarter of 2014, Apple earned more than Google, Facebook, and Amazon combined.

Looks like Apple has always had a penchant for showing who’s boss. 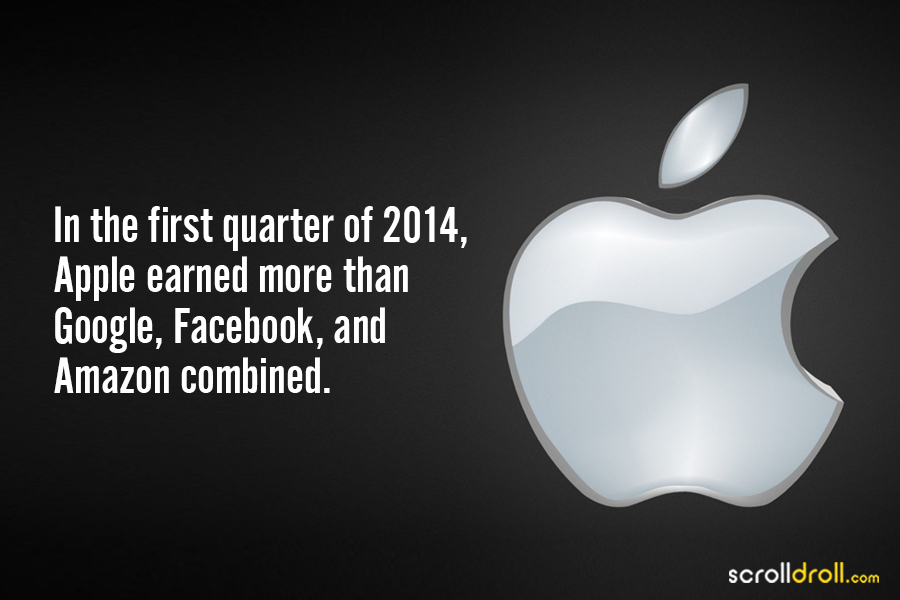 13. Apple Is Worth More Than The Entire Russian Stock Market.  (Source: Forbes)

Wonder what’d happen if the cold war wasn’t over yet. 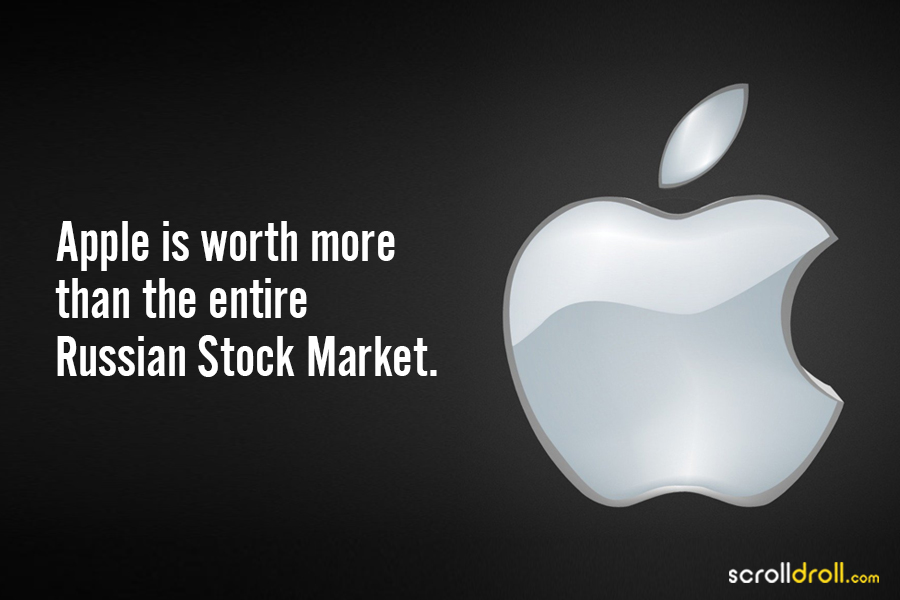 Because you never know what might hit you – or your laptop. 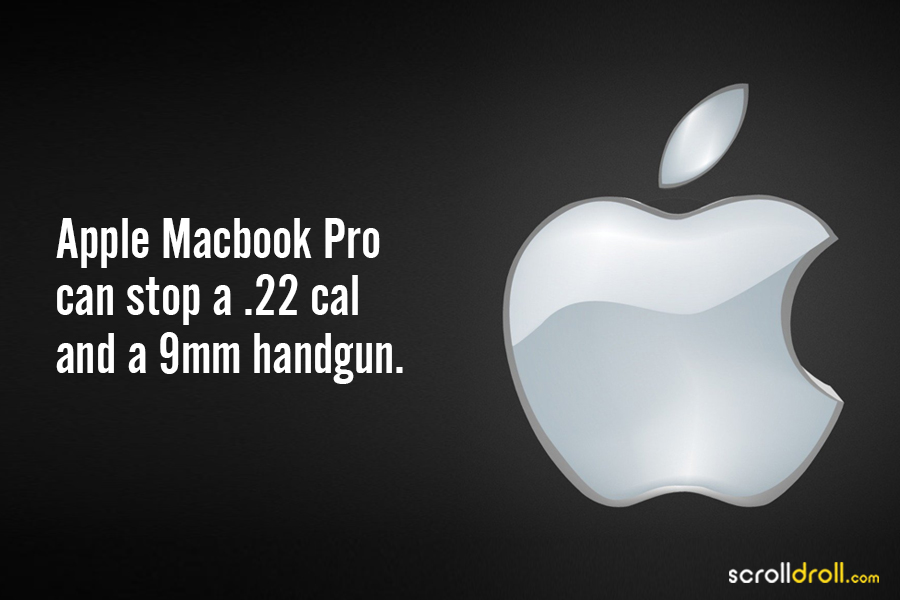 15. It is easier to get into Harvard University than getting a job at the Apple Store. (Source: Business Insider)

In 2009, Apple announced that over 10,000 people applied for a job in a new Apple store in Manchester, of which only over 200 people got jobs – an astounding 2%. In comparison, Harvard had an acceptance rate of 7% the previous year. 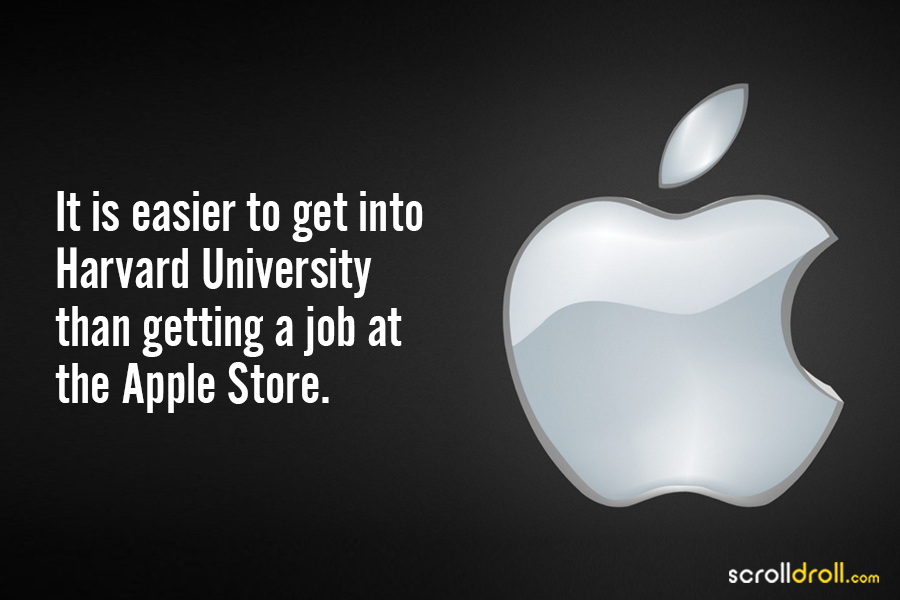 16. The iPad doesn’t have a calculator app. 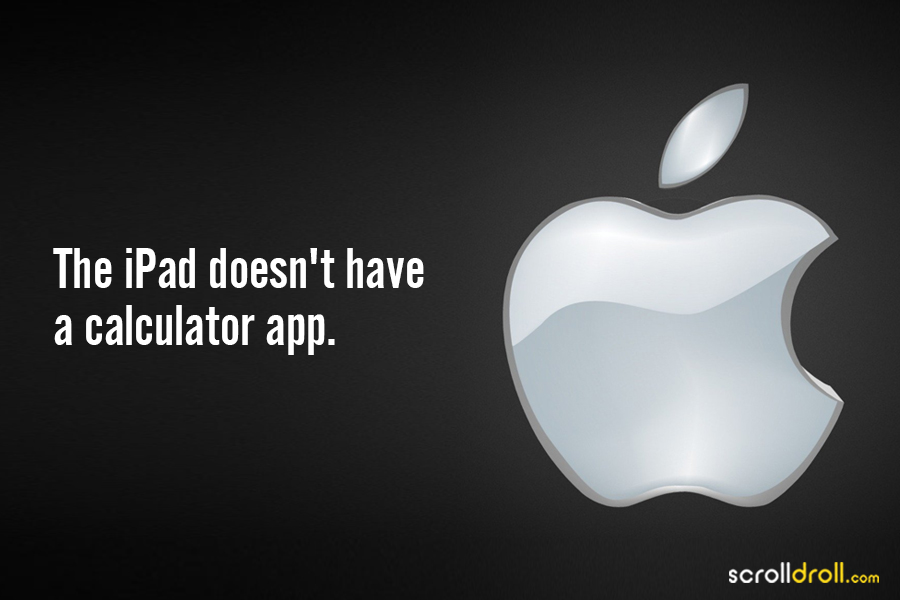 The third co-founder, Ronald Wayne, had 10% shares, which he sold for $800 just 12 days after joining Apple. If he hadn’t done so, his shares would be worth tens of billions of dollars today. However, Wayne has admitted on record that he doesn’t regret his decision. 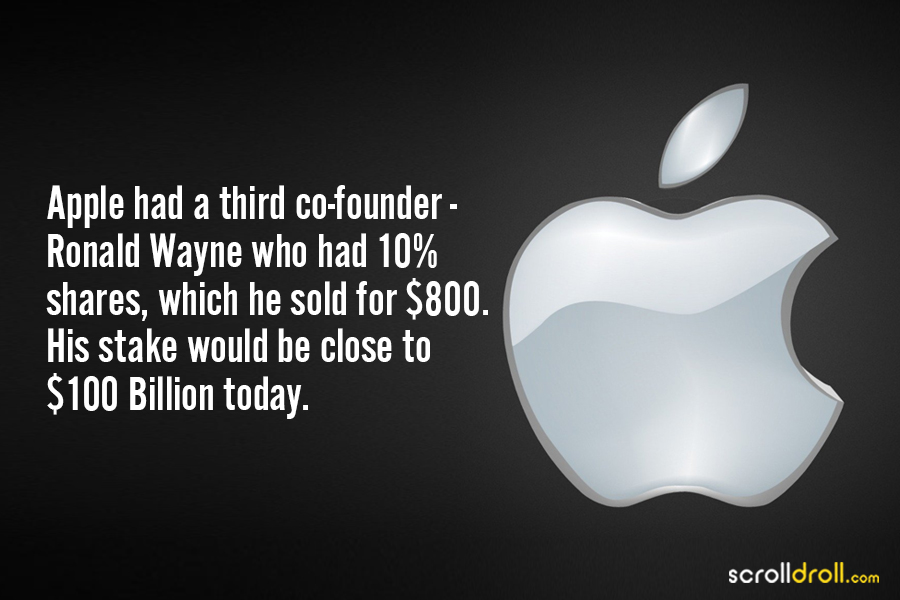 Despite being the co-founder, Jobs was in a bit of a power struggle with CEO John Sculley in the 80s which eventually led to his resignation from Apple. Jobs went on to take on more successful projects, including NeXT computers and Pixar. He rejoined Apple in 1996 after Apple bought NeXT, and much of the tech used in NeXT made its way to apple products, and finally evolved into the Mac OS X. 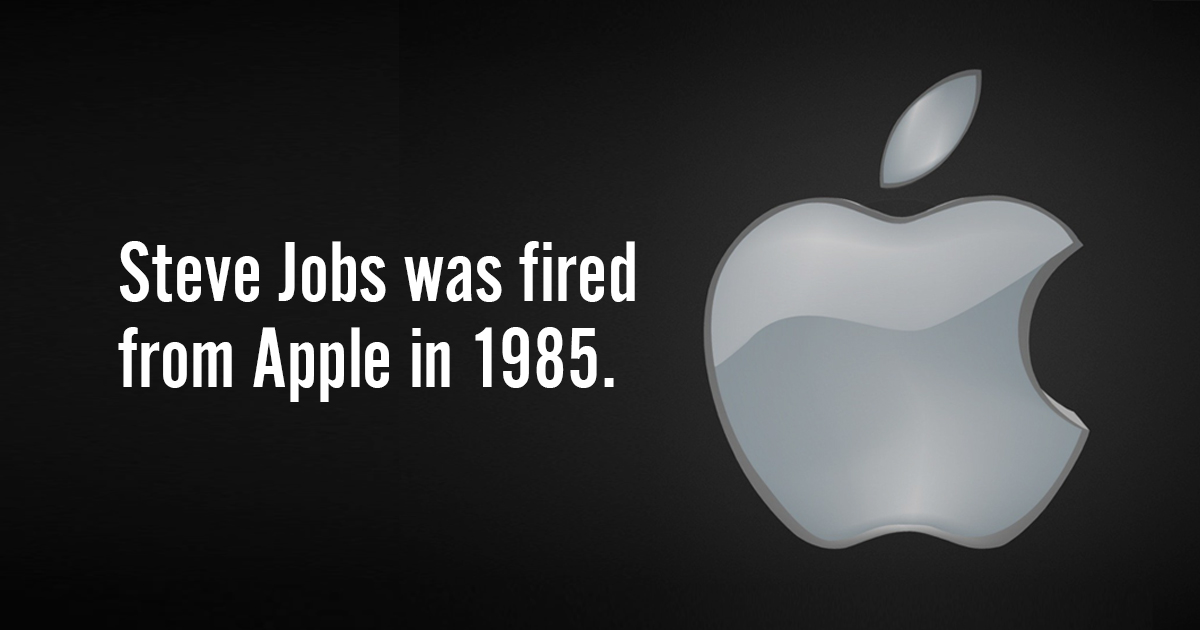 19. One in every three engineers in Apple is Indian.

It is no secret that Indians make up a large part of Silicon Valley. As a result, every third engineer in Apple is Indian. 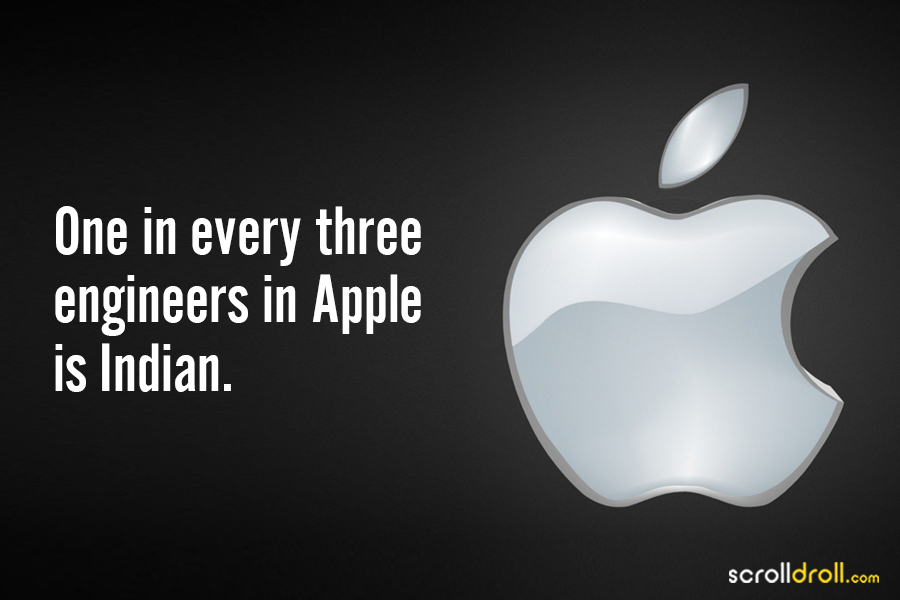 Vinnie Cheico, a freelance copywriter, named the iPod with the phrase “Open the pod bay doors, Hal”, from 2001: A Space Odyssey in mind; the phrase referred to EVA Pods of Discovery One spaceship. 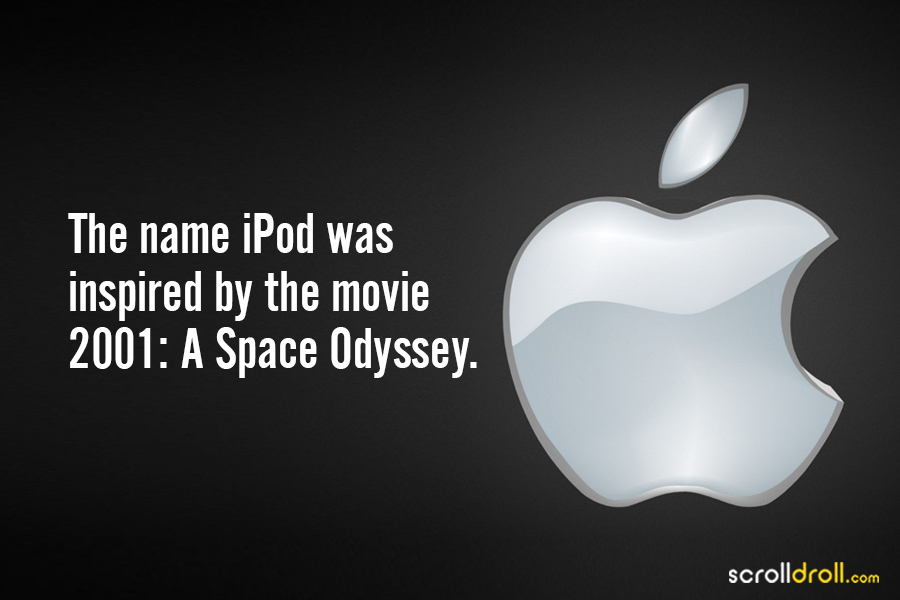 20 Unforgettable Quotes And Dialogues From A Beautiful Mind