How often do you buy a Nike product? Even if you never bought a product from Nike, you must have heard about them. Nike is one of the most recognized sportswear brands in the world. Obviously, such a huge company must have a history that a lot of people today are unaware of. Here are the 15 most interesting facts about Nike that you probably didn’t know.

1. Many people mispronounce the name “Nike”. It is correctly pronounced “ny-kee” and the name comes from the Greek goddess of victory.

We are all familiar with the brand. It has a very short but catchy name. But many of us are pronouncing it wrong. It does not rhyme with “like” or “bike”. It is instead pronounced as “ny-kee”, which rhymes with “hickey”. 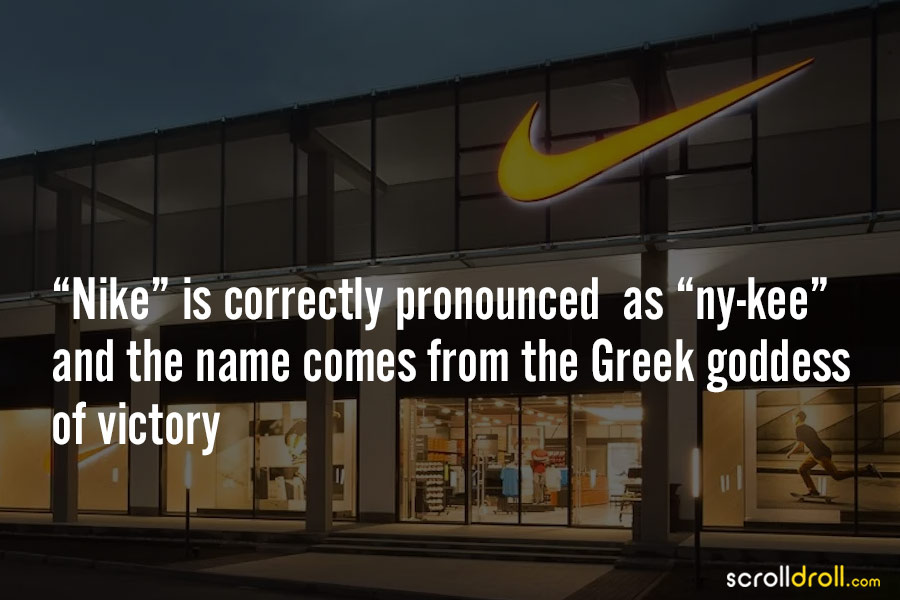 2. The Nike logo was designed by a student at Portland State University for just $35

The famous Nike logo was designed by Caroline Davidson, a student of Portland State University for $35. She was later given $640,000 worth of Nike products. 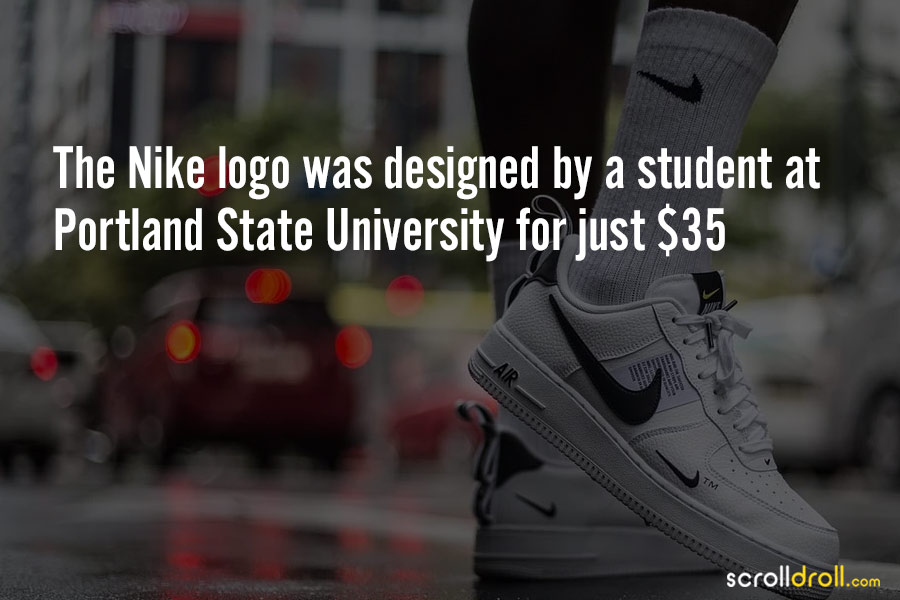 3. Nike’s slogan “Just Do It”, was inspired by a convicted killer’s last words

The company’s slogan “Just Do It”, which is now famous worldwide, was inspired by Gary Gilmore’s last words. Gary Gilmore was an American criminal who was executed on 17th January 1977 by a firing squad. His last words were “Let’s do it”. 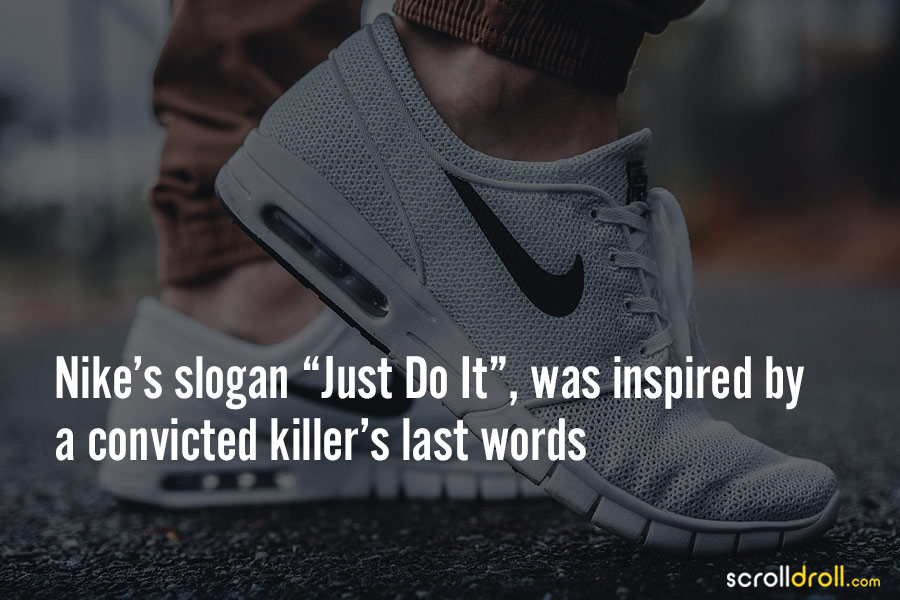 4. Nike’s most recent innovation is a shoe that can be controlled via a smartphone

It is named, Nike Adapt, powered by the Nike adapt app. The shoe fits itself to the shape of your foot, customizes lights, and checks battery levels. The app contains fit preferences to save time. 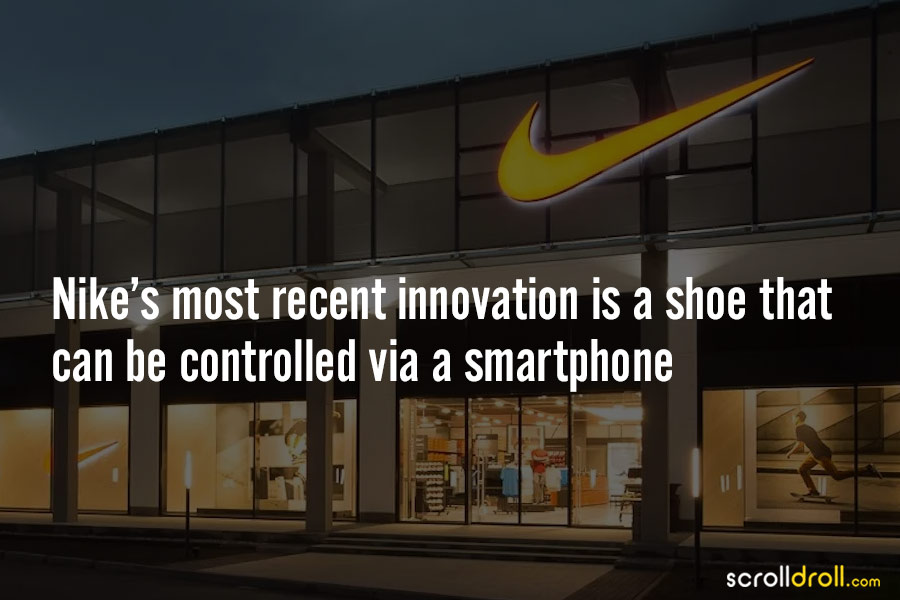 Niketown London is the largest Nike store in the world. Situated in Oxford Circus in Central London, the store covers an area of 42,000 square feet (approx.) and consists of four floors. 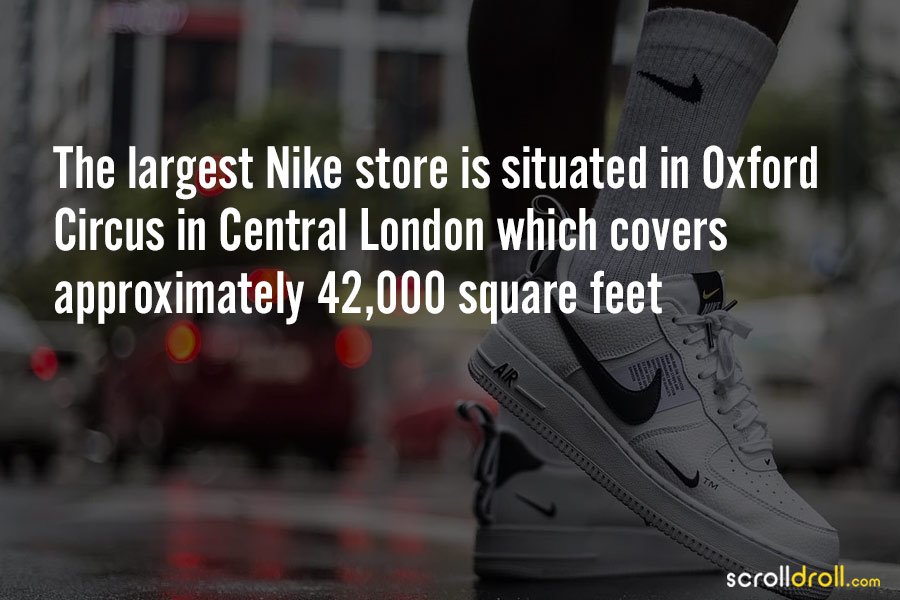 6. The first pair of Nike shoes were made from Waffle Iron which had grooves on the sole for a better grip for the athletes

Nike’s first shoes, launched in 1974, were made from the waffle iron. It was dubbed as Moon Shoe due to the imprint it left on the ground. 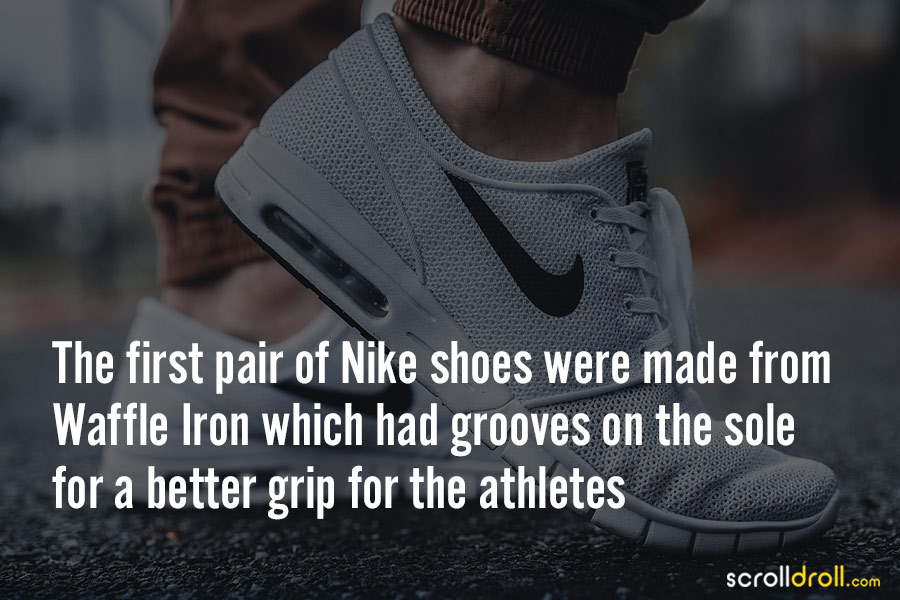 7. Nike was known as Blue Ribbon Sports when it first started

The now-famous name, Nike, wasn’t the first choice as it seems. The company was called Blue Ribbon Sports when it first started. It changed its name to Nike in 1971. 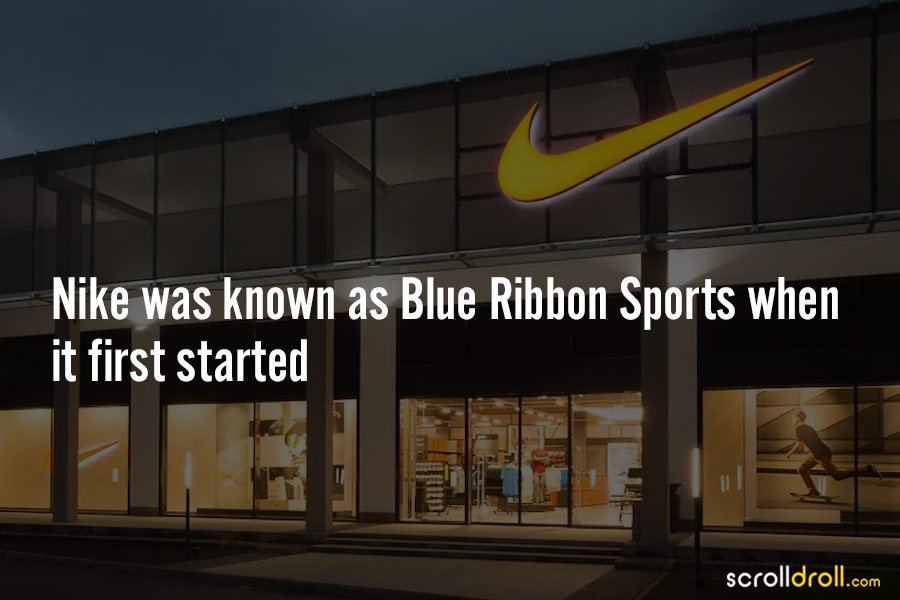 8. The first athlete to promote Nike was Ilie Nastase – a Romanian Tennis Player 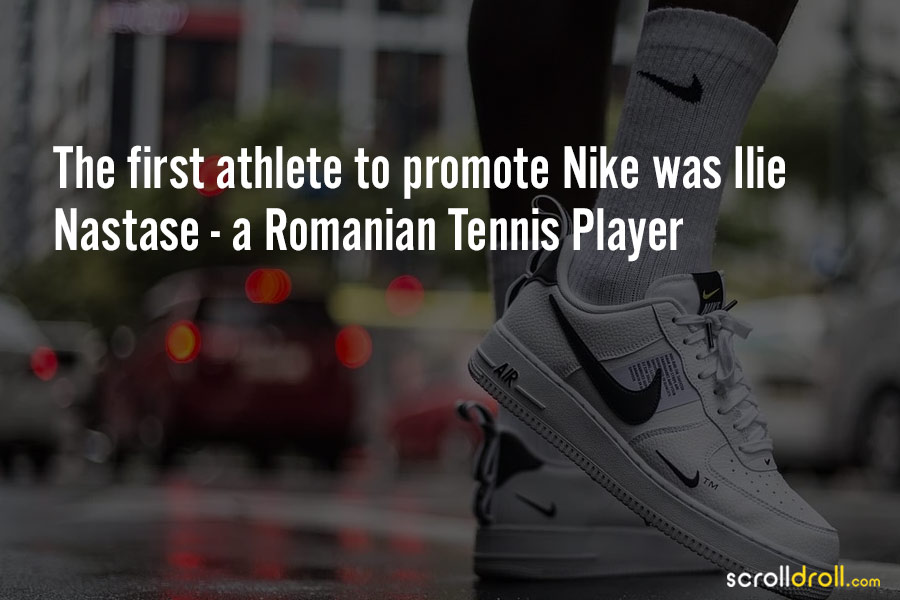 9. In 1987, Nike was sued by the Beatles over an Air Max Sneaker ad where they used their song “Revolution” 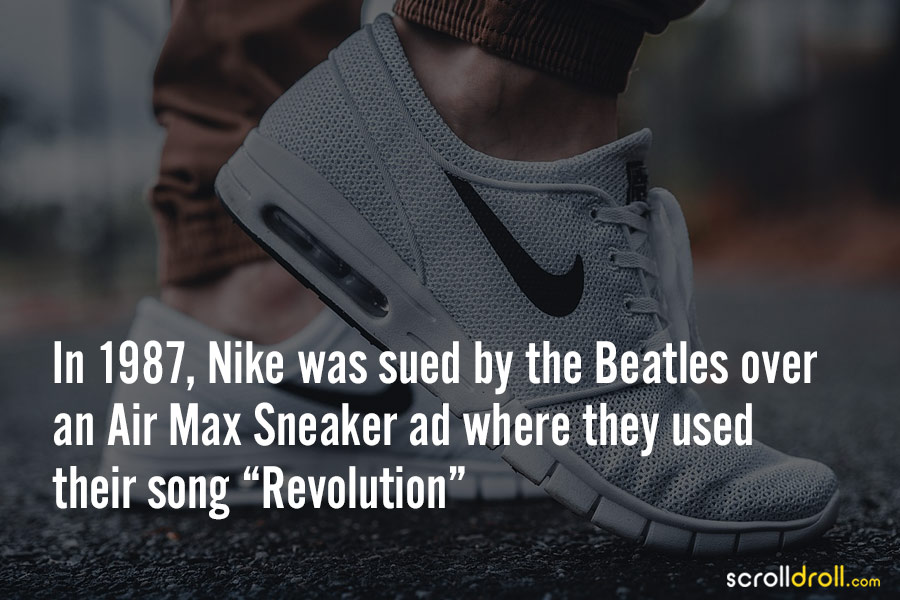 10. The famous basketball player Michael Jordan hated the colours red and black when he first saw Air Jordan I

Nike’s shoes Air Jordan I was popularized by the legendary basketball player Michael Jordan. Though at first sight, he hated the colour red and black in the shoes. 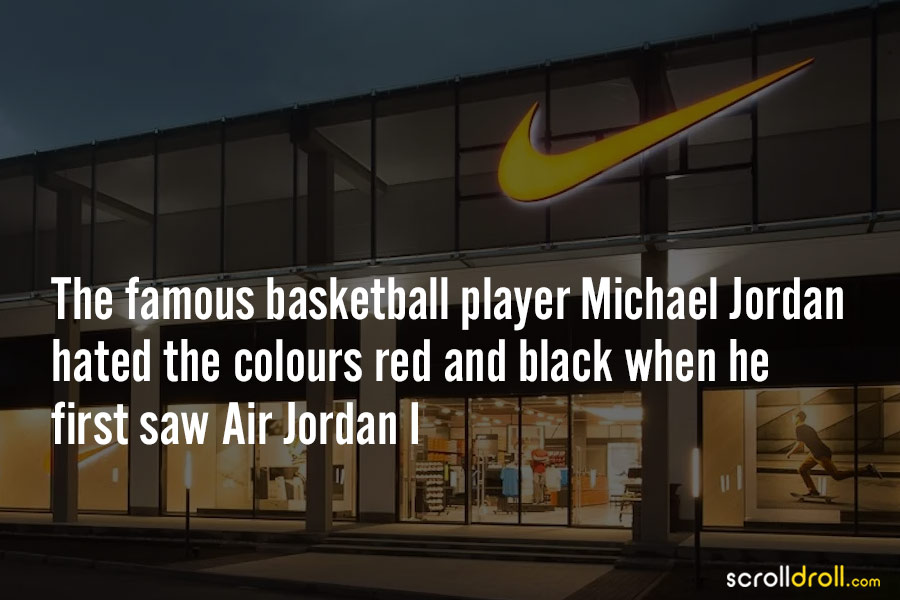 11. Nike once sponsored skateboarder Bam Margera to wear their shoes. Margera didn’t like wearing their shoes, so he wore shoes from different companies, plastering over the Nike logo

Skateboarder and TV star Bam Margera was sponsored by Nike to wear their shoes. However, Margera didn’t like wearing Nike shoes. He sneakily wore shoes from other brands and plastered the logo of Nike over them. This one is hilarious. Certainly ranks among the most interesting facts about Nike. 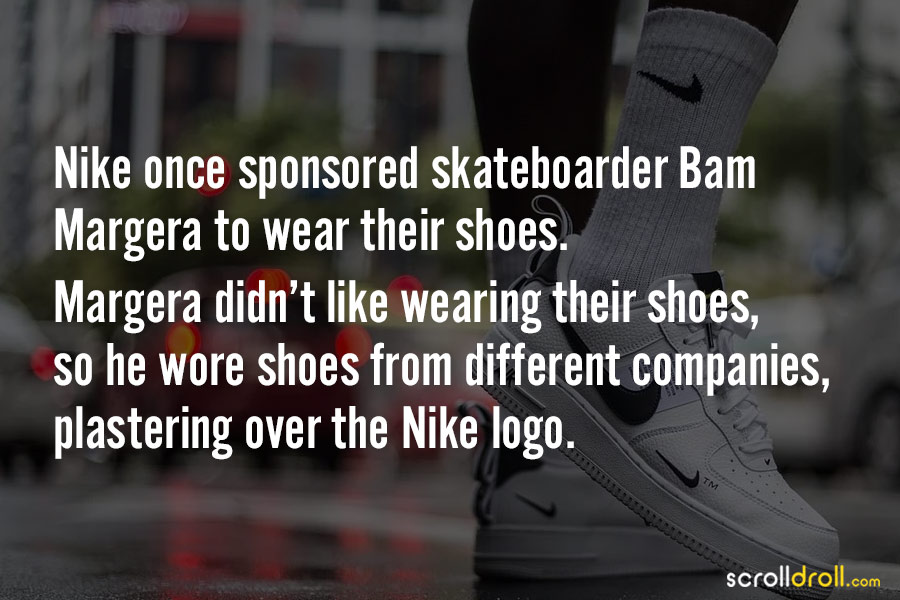 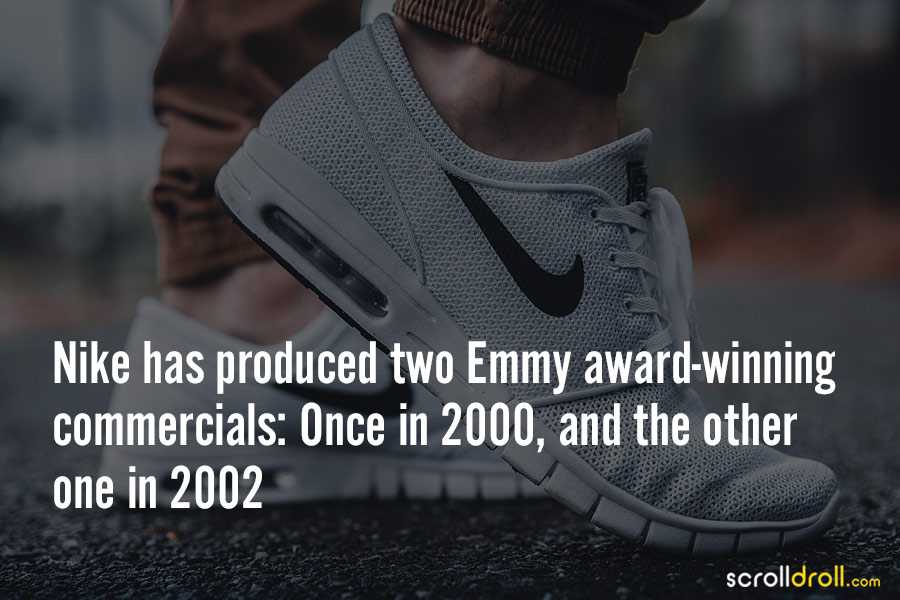 13. Nike does not own the factories where their products are manufactured

Interestingly, Nike is not the owner of any of the factories where their products are manufactured. It is owned by contractors who get paid by Nike to manufacture its products. 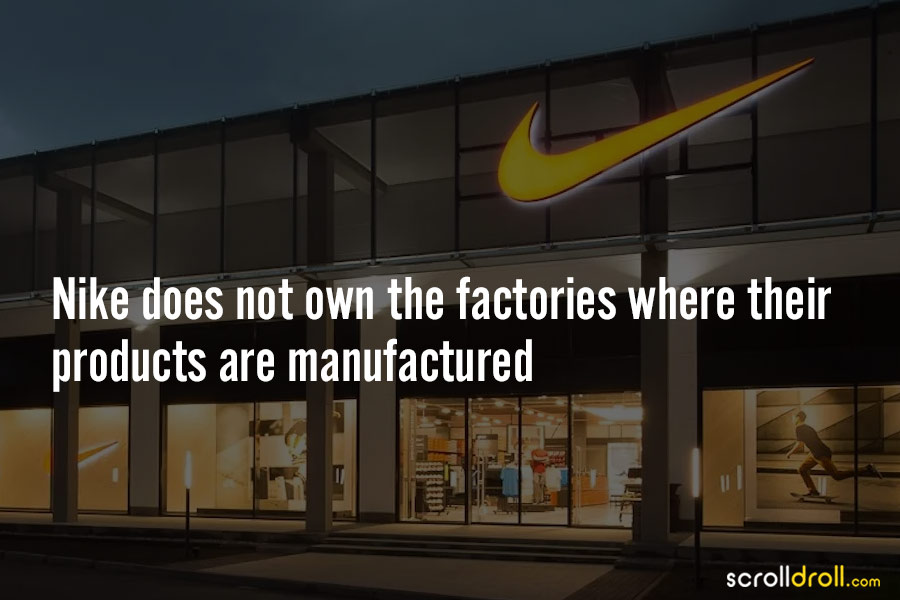 14. Early prototypes of Nike were made from fish skin and kangaroo leather

Nike’s co-founder Bill Bowerman was a field coach at the University of Oregon. He was dissatisfied with the imported shoes, thinking they did not give the athletes what they need. So he started designing his own shoes using Fish skin, Kangaroo leather, and deer hide. 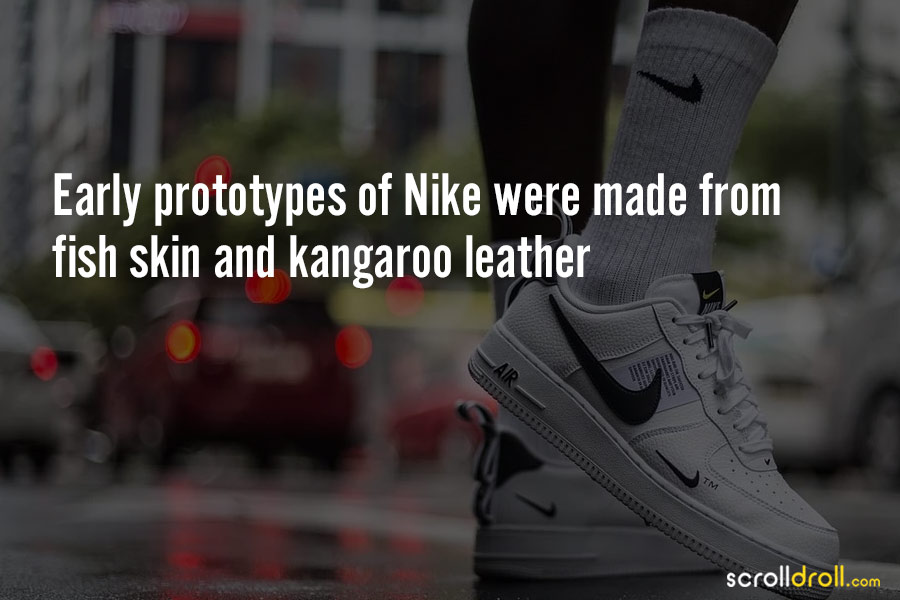 15. Nike was founded in 1964 by University of Oregon track athlete Phil Knight and his coach, Bill Bowerman

In a class, Knight was challenged to come up with a business model. He proposed a cost-efficient method of producing better shoes for a footwear brand. It would use foreign labour and will be marketed to high school and college athletes. Knight and Bowerman opened Blue Ribbon Sports, which later changed its name to Nike in 1971. 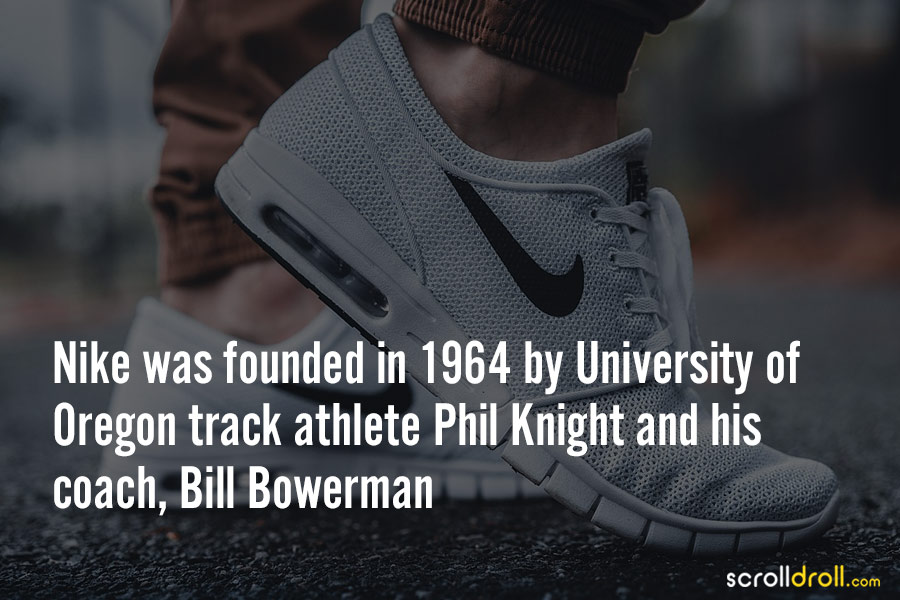 Here are the 15 most interesting facts about Nike. Did you know any of them before?