10 Interesting Facts About Tata Group Everybody Should Know!

Founded by Jamshedji Tata in 1868, the Tata group is a global enterprise headquartered in India and consists of over 100 operating companies, with operations in more than 100 countries across six continents, exporting products and services to over 150 countries. Tata companies with significant scale include Tata Steel, Tata Motors, Tata Consultancy Services , Tata Power, Tata Chemicals, Tata Global Beverages, Tata Teleservices, Titan, Tata Communications and Indian Hotels. Here are 10 interesting facts about Tata Group you should know:

Let’s go back to our list of interesting facts about Tata group:

Tata Group was ranked as the most valuable brand in India by Brand Finance.

Tata Group was ranked 11th in the world’s top 100 reputable companies in 2009 by Forbes Magazine.

Tata ranked as 3rd Most Trusted Brand in 2014 in the Brand Trust Report.

TATA Group  was voted as the most trustworthy brand among the Indian corporate houses by Equitymaster in 2011. 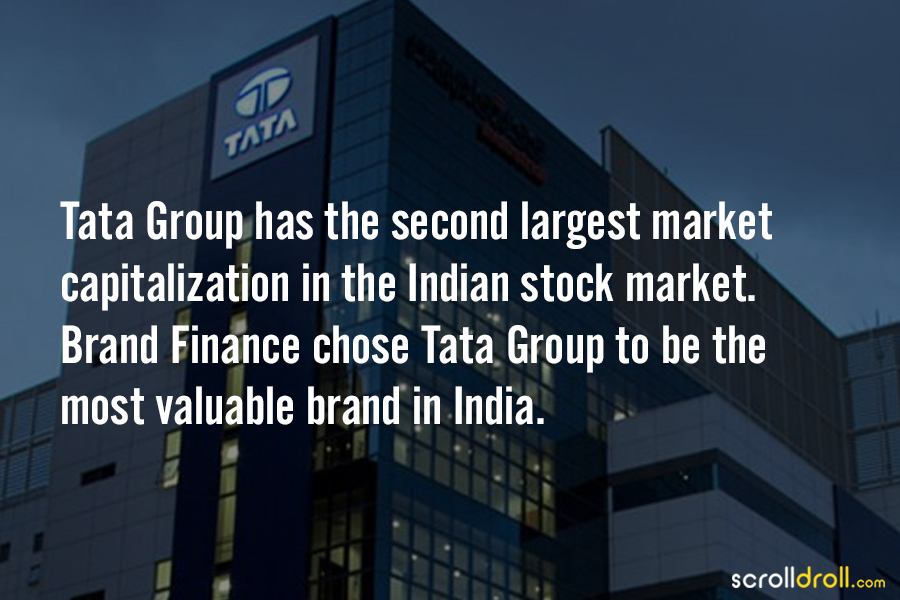 2. Ranking of TATA Group amongst other companies in India and the world:

Tata Steel  is among the top 10 best steel makers in the world.

TCS is among top 10 global IT services companies. 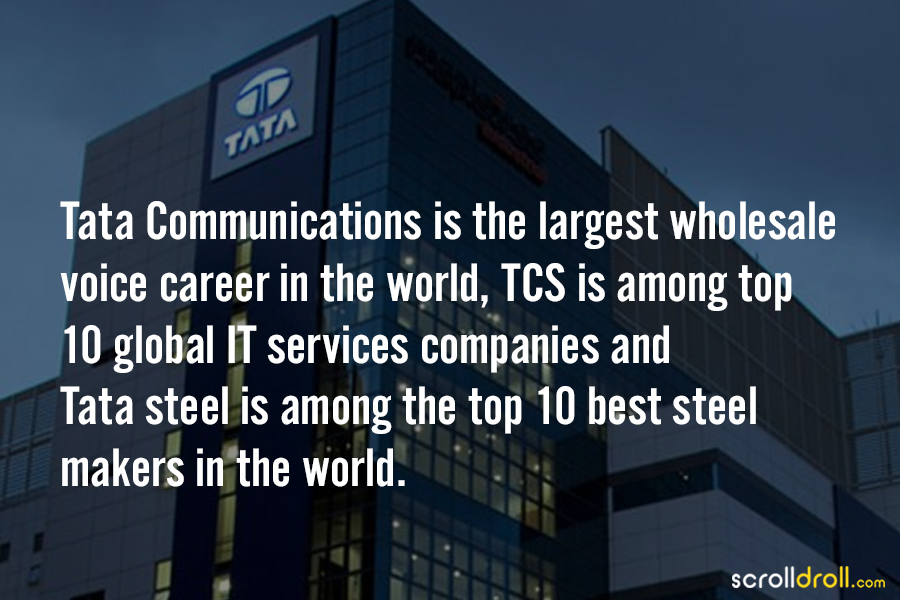 3. Counted among top 10 Philanthropists in India:

Tatas are not counted among the world’s richest people as 66% of their earnings is donated to charity. Trusts created by Tata Group control 65.8% of company shares.

The charitable trusts of Tata Group fund a variety of projects, including organizations that support education, handicrafts and nutrition among malnourished children. 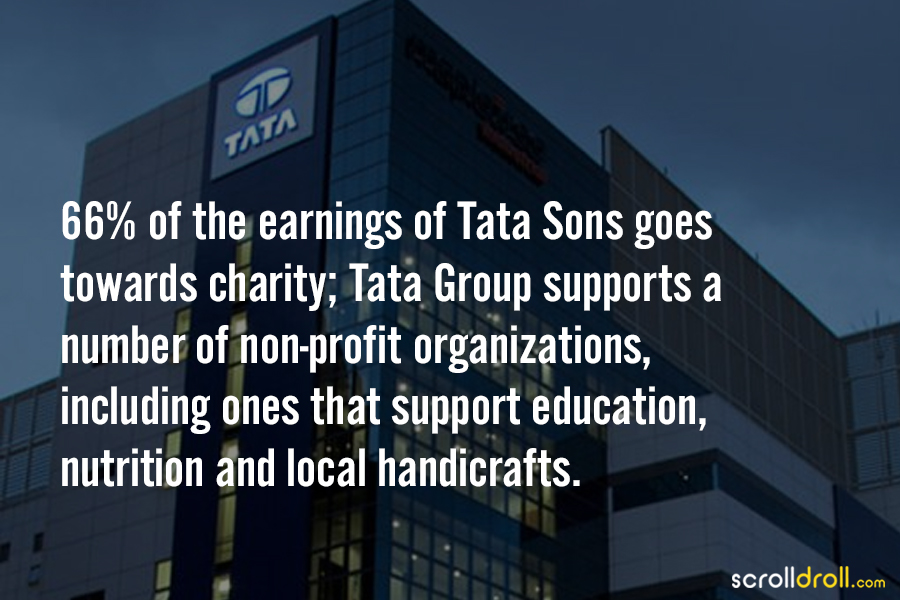 4. End of Tatas as Group Chairmen of Tata Group: 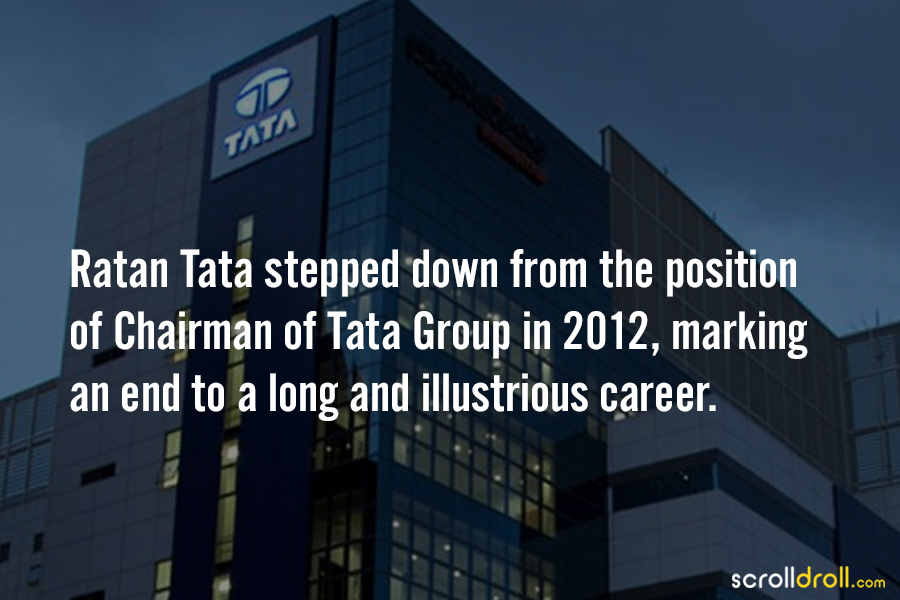 Cyrus Mistry took over as the new Chairman of Tata Group after Ratan Tata stepped down, becoming the second non-Tata to head the group in its history of 143 years. Sir Nowroji Saklatwala had led the group between 1932 and 1938. In 2016, however, Mistry was ousted as the chairman of the TATA group, and since then he and the company have been in a legal tussle. Ratan Tata returned as interim Chairman in the absence of a chairman, and Natarajan Chandrasekaran was appointed Chairman a few months later, becoming the first non-Parsi to hold that position. 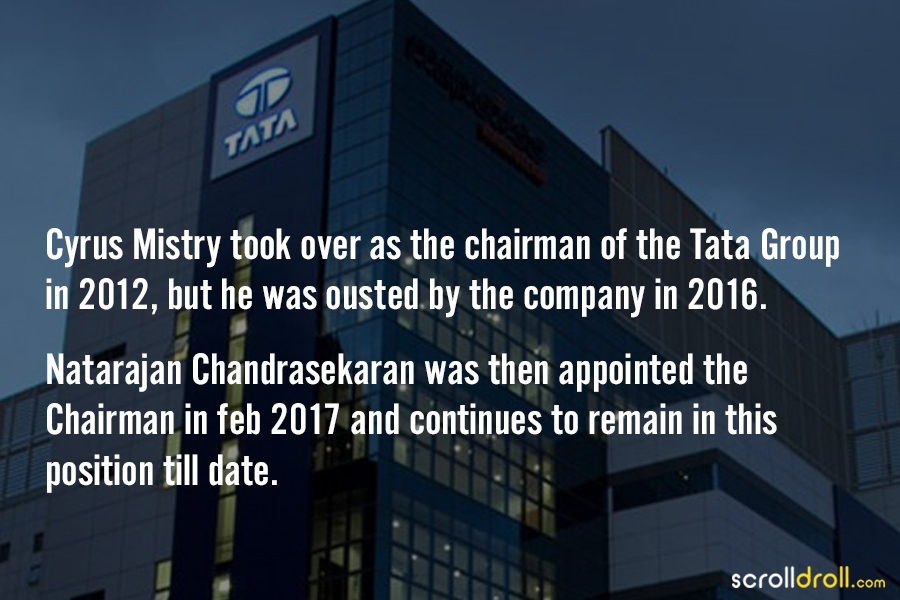 JRD Tata, former Chairman of Tata Group is the only industrialist to be awarded the Bharat Ratna, the highest civilian award in India. He received the award in 1992. 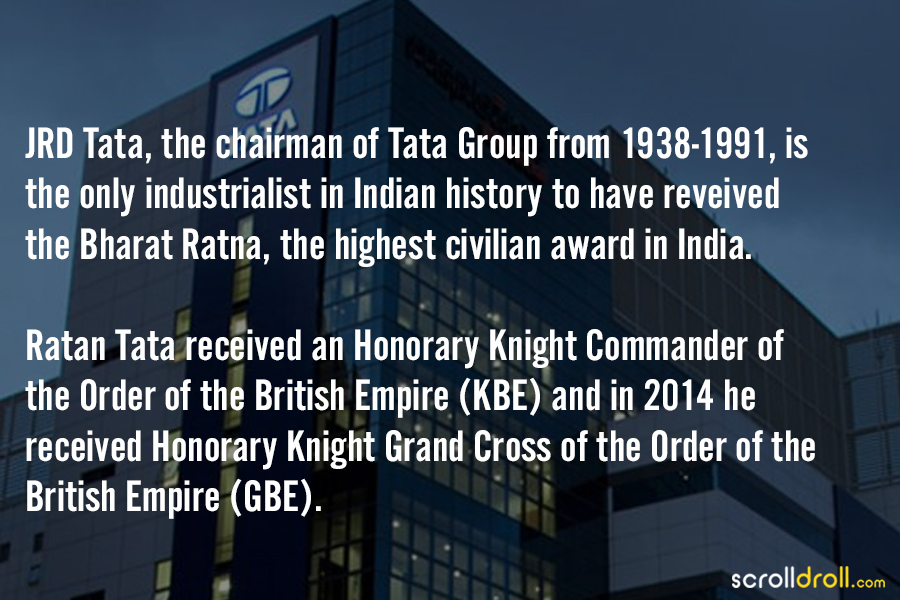 TCS designed and donated an innovative software package that supposedly teaches illiterate adults how to read in 50-55 hours. Tata’s Adult Literacy Program was launched in 2000, and to facilitate easier teaching, TCS came up with Computer-Based Functional Literacy software (CBFL) which uses a number of methods to help an illiterate person reach a functional level of reading in a matter of hours. 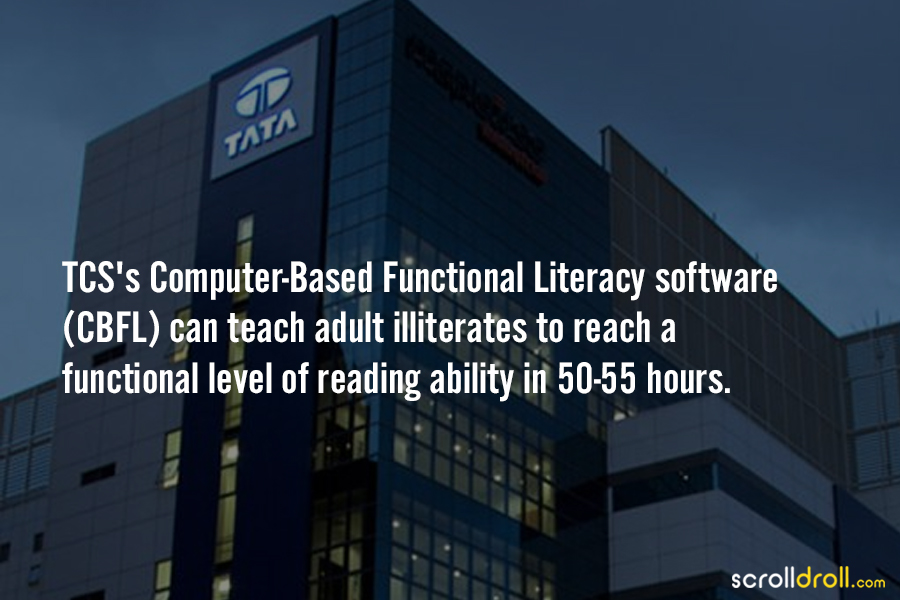 After the Mumbai attacks in 2008, Salaries of then heavily attacked Taj Hotel employees were paid despite the hotel being closed for reconstruction. Ratan Tata personally visited families of all the employees that were affected. 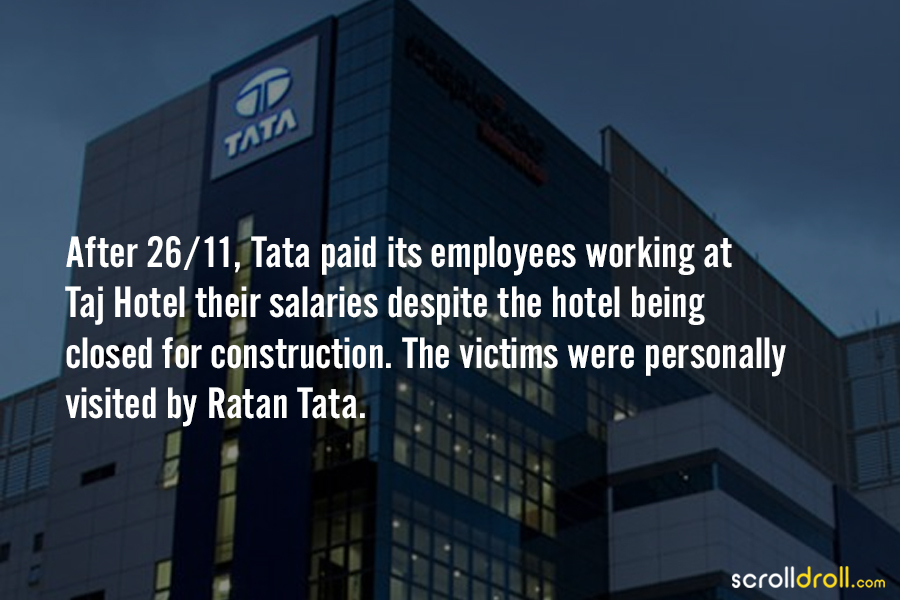 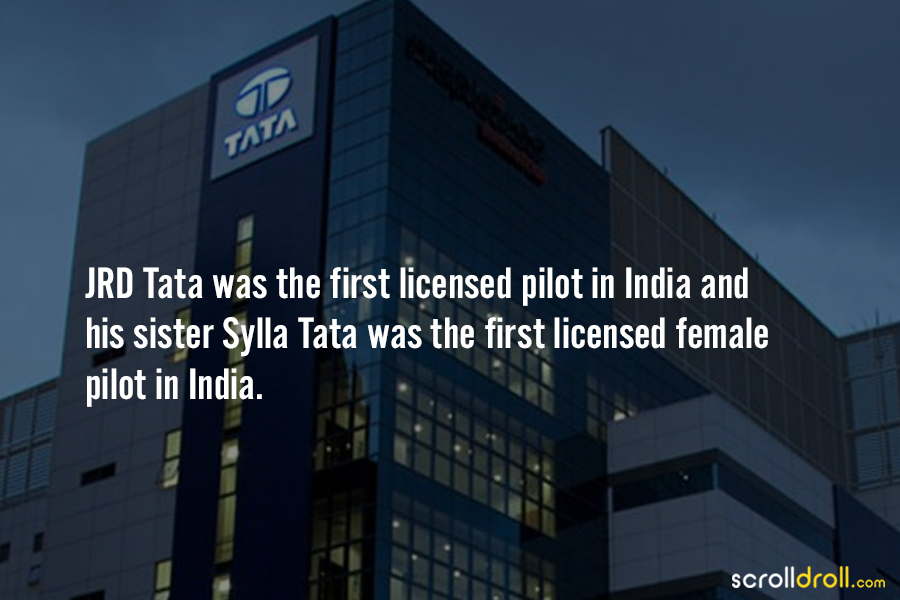 10. Tata Group is the fourth largest employer in India.

After Indian Railways, the Sahara Group and the Indian Armed Forces, the Tata group is the fourth largest employer in India, with over 500,000 employees in TCS. 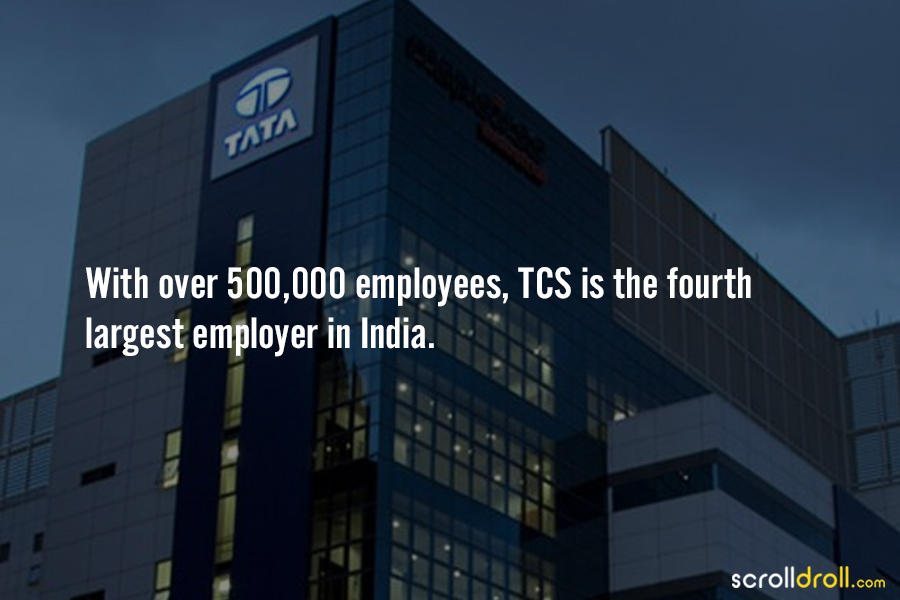 International Dating and Relationships in the Modern Age