1. The Taj Mahal was created by Emperor Shah Jahan for his favorite wife Mumtaz Mahal. 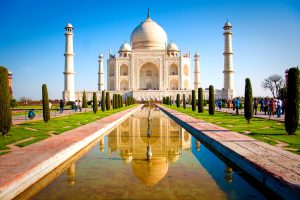 From 1628 to 1658, Shah Jahan was the fifth Mughal emperor. When Shah Jahan’s third and favorite wife, Mumtaz Mahal, a Persian princess who was also an Agra native, died, he was so overcome with grief that he decided to build the Taj Mahal as a testament to his undying love for her.

2. The color of the Taj Mahal changes throughout the day. 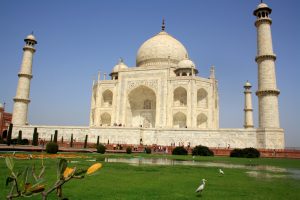 The Taj Mahal’s gleaming white marble changes color depending on the time of day, ranging from the uplifting yellow of sunrise to the desolate deep blue of night. People have speculated that the color shifts represent the emotions felt by the late emperor during his time with Mumtaz Mahal and after her death. 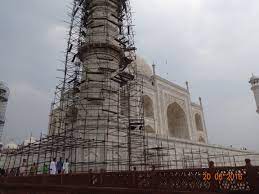 The Taj Mahal is made of red sandstone and covered in massive marble plates. Many different countries and regions contributed artisans to the construction of this world wonder, including Central Asia, Iran, Syria, and Turkey. It took them 20 years to complete this monumental project, which involved over 20,000 artisans.

4. The most shocking rumour is most likely untrue. 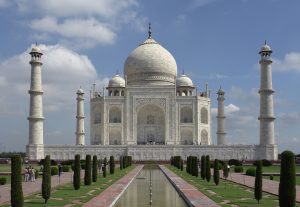 Next on our list of interesting facts about the Taj Mahal is shocking. The legend that Shah Jahan wanted the Taj Mahal to be uncopyable, so he had the artisans’ hands cut off so they could never duplicate such a feat again is a myth, as there is no evidence to back up this claim. It appears that the workers were not only well compensated but also respected for the skills required to construct the Taj Mahal. 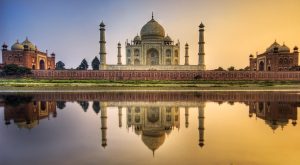 What we do know is that the Taj Mahal’s name is derived from Persian, the Mughal court’s official language. The words Taj and Mahal both mean ‘crown’ and ‘palace,’ respectively. As a result, the name “Taj Mahal” literally means “Crown Palace” or “Palace of the Crown.”

6. The walls are carved with Koran passages and inlaid with semi-precious stones. 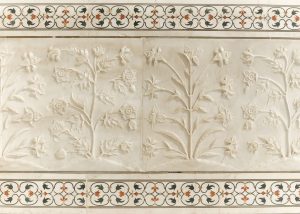 The Taj Mahal is made of red sandstone covered in white marble, with inlaid stone floral patterns and beautiful Arabic calligraphy covering the majority of the interior and exterior walls. Verses from the Koran are engraved in calligraphy on the walls, and they speak of paradise. Inlaid precious or semi-precious stones in Pietra Dura patterns — a Florentine (13th–15th century) technique consisting of designs made from stones inlaid into a stone background — are also included in the decorations. Jasper, jade, turquoise, and sapphire were among the precious stones used in the inlay. During the Indian Mutiny of 1857, the British army stripped many of the mausoleum’s precious stones and took them.

7. The Taj Mahal contains both cenotaphs and tombs. 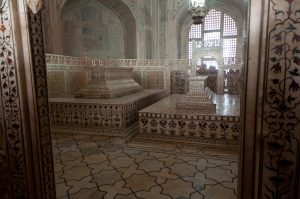 The cenotaphs of Shah Jahan and Mumtaz Mahal are located in the heart of the Taj Mahal. Because Islam forbids the decoration of graves, these cenotaphs are empty commemorative mausoleums, and the two are buried in unmarked graves in a chamber below. Beautiful calligraphic inscriptions in the form of Koran verses frame the arches of the chamber, which are surrounded by an exquisite marble screen. 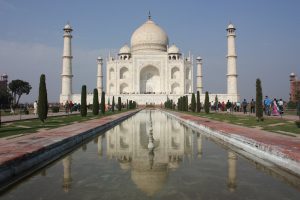 The Taj Mahal is almost perfectly symmetrical, following Persian and Islamic architectural principles. Perfect symmetry can be found in the minarets (towers), walls, rooms, and even gardens. Perhaps the only elements of the Taj that do not follow perfect geometric proportions and symmetrical precision are the placement of Shah Jahan’s cenotaph — and his grave.

9. According to legend, Shah Jahan wished to construct a black marble Taj Mahal for himself. 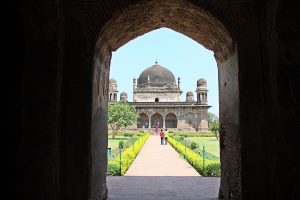 You will want to know the next on our list of interesting facts about Taj Mahal. The Black Taj, also known as the Kaala Taj or Second Taj, is a legendary black marble mausoleum that was supposed to be built directly across the Yamuna River from the Taj Mahal. Shah Jahan is said to have intended to construct this black marble mausoleum as a tomb for himself, with a bridge connecting the two structures (the Black Taj and the Taj he built for Mumtaz Mahal).

10. The Taj is flanked by a red sandstone mosque and a guesthouse.\ 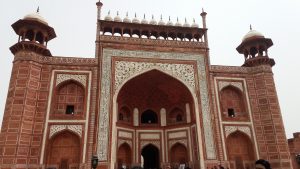 On opposite sides of the Taj Mahal, there is a mosque and a guest pavilion. Both of these buildings are red in color and are supposed to be completely identical and symmetrical. The mosque is to the west of the mausoleum, facing Mecca’s holy site, while the second structure, the guest house, is to the east. Because the mosque is a functioning place of worship, the Taj’s entire mausoleum complex is closed to visitors on Fridays for prayer.

11. The building materials were transported to Agra by 1,000 elephants. 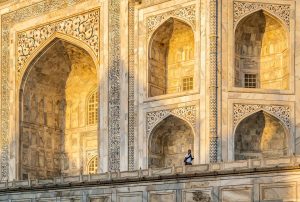 Over 1,000 elephants were used to transport the materials needed to construct the Taj Mahal. Transportation was mostly required for white marble and red sandstone, which came from all over India and the Middle East. Red sandstone is used frequently in Persian architecture and can be seen in other Mughal structures such as the Red Fort and Jama Masjid in Delhi, while white marble was used to represent the divine.

12. To create an optical illusion, the minarets were built with a slight lean. 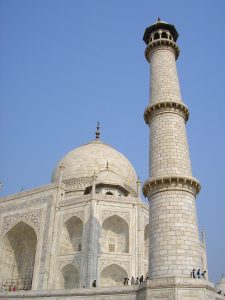 The Taj Mahal’s four minarets, or towers, lean slightly outwards, giving it a much larger appearance from afar. The first view that visitors are treated to upon entering the main gate is a striking one due to this optical illusion. The minarets, on the other hand, don’t just lean outwards to give the impression of grandeur; this architectural decision is based on the logic that having them lean outwards would prevent them from falling on, and destroying, the Taj main dome in the event of an earthquake.

13. Outside the Taj Mahal, Shah Jahan’s other wives and favorite servants are buried. 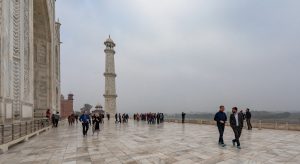 Although, when discussing the Taj, the main focus is usually on Shah Jahan and Mumtaz Mahal’s love story, leading us to believe it is only a mausoleum for the two sweethearts. Outside the Taj, but within the same complex, are several mausoleums where Shah Jahan’s other wives and favorite servants are buried, demonstrating a level of respect and thoughtfulness to them as well.

14. The gardens of the Taj Mahal are reminiscent of British gardens. 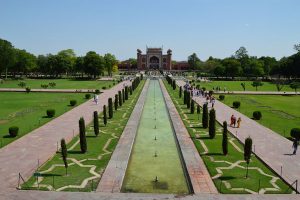 The Taj Mahal’s original garden contained roses and fruit trees, but the British altered the landscape during the nineteenth century. When the British Viceroy restored the garden, they wanted it to look like London’s lawns, so they planted clumps of shrubs and rows of trees to replace the Mughal style. Until now, the European-style lawns have been preserved.

15. The Taj’s facade is made of mud face packs. 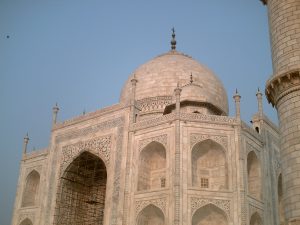 Pollution levels in India continue to be alarmingly high, especially in the northern part of the country, where Agra, the Taj Mahal’s home, is located. The Taj’s white marble has turned yellow due to high pollution levels. To combat the yellowing, the iconic monument has received and continues to receive special mud-pack treatment. According to archaeologists, the cleaning treatment, a traditional recipe used by Indian women to restore a natural glow on their faces, will help restore the mausoleum’s natural sheen and color.

We now have come to the end of the list of interesting facts about the Taj Mahal. The Taj Mahal is a magnificent structure. Take a picture of yourself and your spouse with the mausoleum in the background when you visit.