Founded by Maharaja Sawai Jai Singh II, Jaipur, the capital city of Rajasthan, lies on the edge of the Thar desert and is surrounded by the Aravalli Hills. Unarguably one of the most beautiful ancient cities of India, Jaipur was built with such scrupulous planning that its architecture can give any modern-day engineering marvel a run for its money. Tourist-Friendly city is a perfect example of how heritage and modern can coexist together. While on one hand there are 18th-century architectural marvels that leave the tourists enchanted, on the other hand, the city is equipped with a plethora of shopping malls arcades and markets to give the tourists all the retail therapy they need. 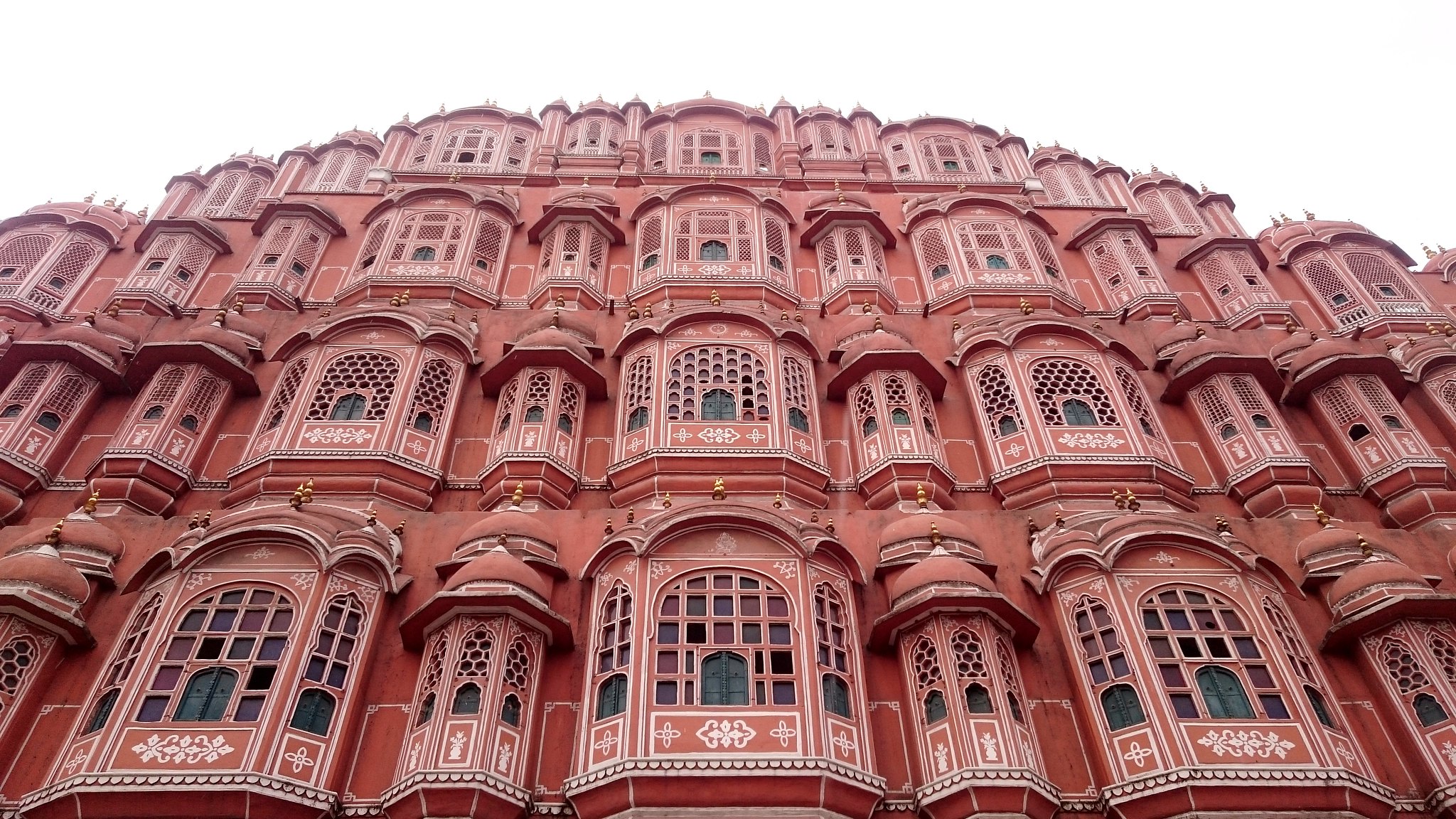 The history of Jaipur is as interesting as the city itself. Jaipur became the first planned city of India when its king Sawai Jai Singh II, who ruled the princely state of Jaipur from 1699-1744, built it in 1727. During the initial few years of his rule, Maharaja used Amber as his capital and fortress. However, the growth in the human population and a decrease in water supply made the king feel the need of moving his capital to Jaipur. 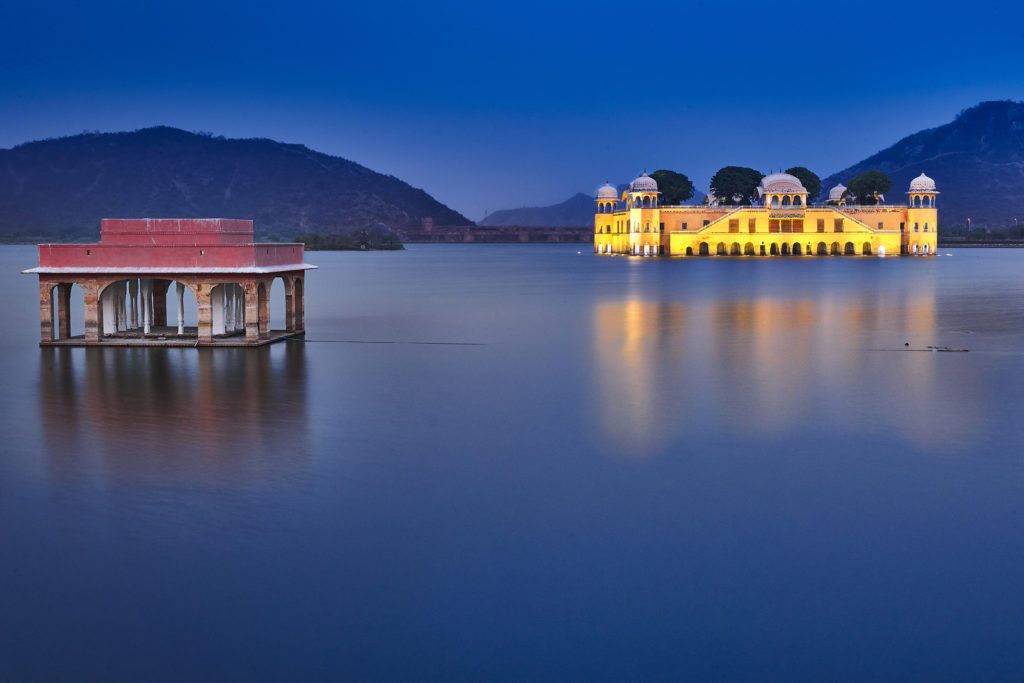 A looming threat to the throne from enemies compelled Jai Singh to focus more on the security aspect of his new capital city. As a result, a Brahmin scholar from Bengal, Vidyadhar Bhattacharya was roped in by the king to plan the city’s architecture of the city. The scholar put his knowledge of Shilpa Shastra (the science of Indian architecture) to use and planned the city with Jai Singh. It is believed that the foundation of Jaipur city was laid down on 18th November 1727, after which it took 4 years and a massive amount of meticulous architectural planning to make the city what it is today.

The cultural richness of the city attracts tourists from all over the world. Its heritage and warm hospitality make Jaipur a difficult-to-miss place from their travel itinerary. Jaipur has excellent connectivity with major cities of the country via road, rail, and air. Located at a distance of 268 km from Delhi, it barely takes 4-5 hours to get to Jaipur via NH48. From Chandigarh, it is 528 km and takes about 8-9 hours to get there.

Located on the edge of the Thar Desert in East Rajasthan, Jaipur has a significantly hot and dry climate during the major part of the year. The climate during summer and winter season varies between extremely hot and harshly cold. The summer season starts from April and lasts till end-June. During May and June, it gets unbearably hot and the mercury climbs to 47 degrees on some days. Monsoon showers, which start from mid-July and last till September, bring relief from the heat and the temperature then starts to dip. October and November are satisfactorily pleasant and December marks the beginning of winter season, which lasts till March.

Things to See & Do In Jaipur

Give credit to Sawai Jai Singh’s futuristic planning and development that has made Jaipur stand tall against the test of time and nature. The heritage buildings, which include palaces, forts, and bazaars, have been sturdy as a rock for centuries, still alluring tourists from all over the globe.

The five-story structure which stands in the heart of the city and watches over its habitants day and night is one of the most popular monuments of Jaipur. Hawa Mahal, also known as Palace of Winds, was built in 1799 by Sawai Pratap Singh for royal women to watch the daily activities on the streets of Jaipur. A very nominal amount is charged from the tourists who wish to see the monument closely from inside. Timings to visit the monument are between 9 am and 4.30pm. 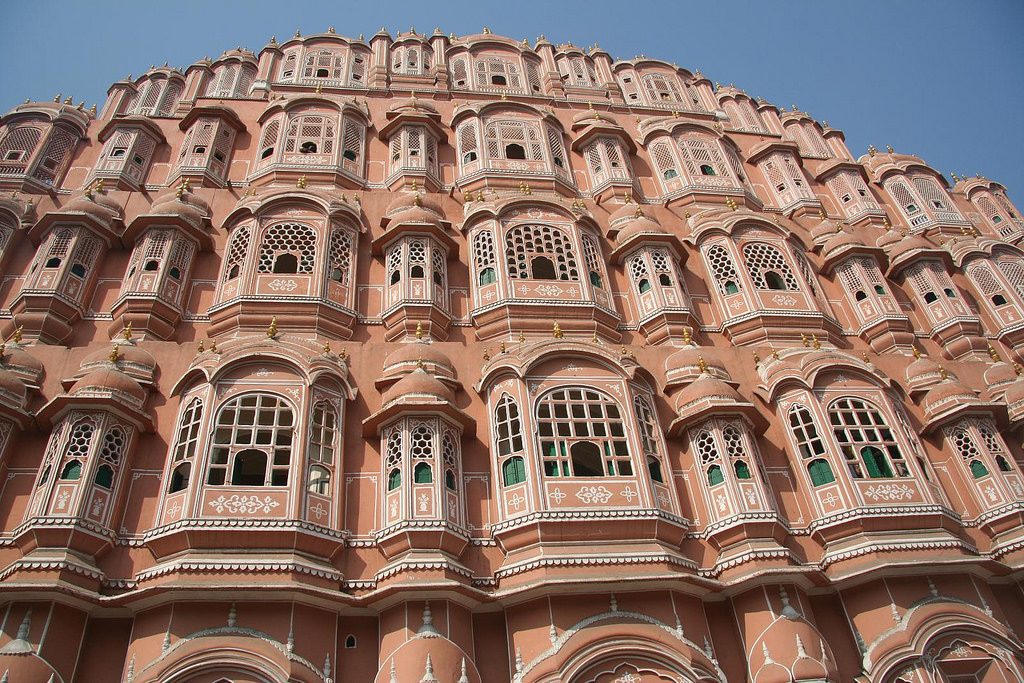 It isn’t just the heritage buildings of the city that attract tourists. The vibrant and colorful bazaars of Jaipur also work as a magnet for visitors. Bapu Bazaar, one of the most popular marketplaces of Jaipur, is a sight to behold for the tourists. From colorful traditional jewelry to hand-printed bandhani stoles and dupattas, Bapu Bazaar is an opportunity for every tourist to take a memorable piece of Rajasthan with them. 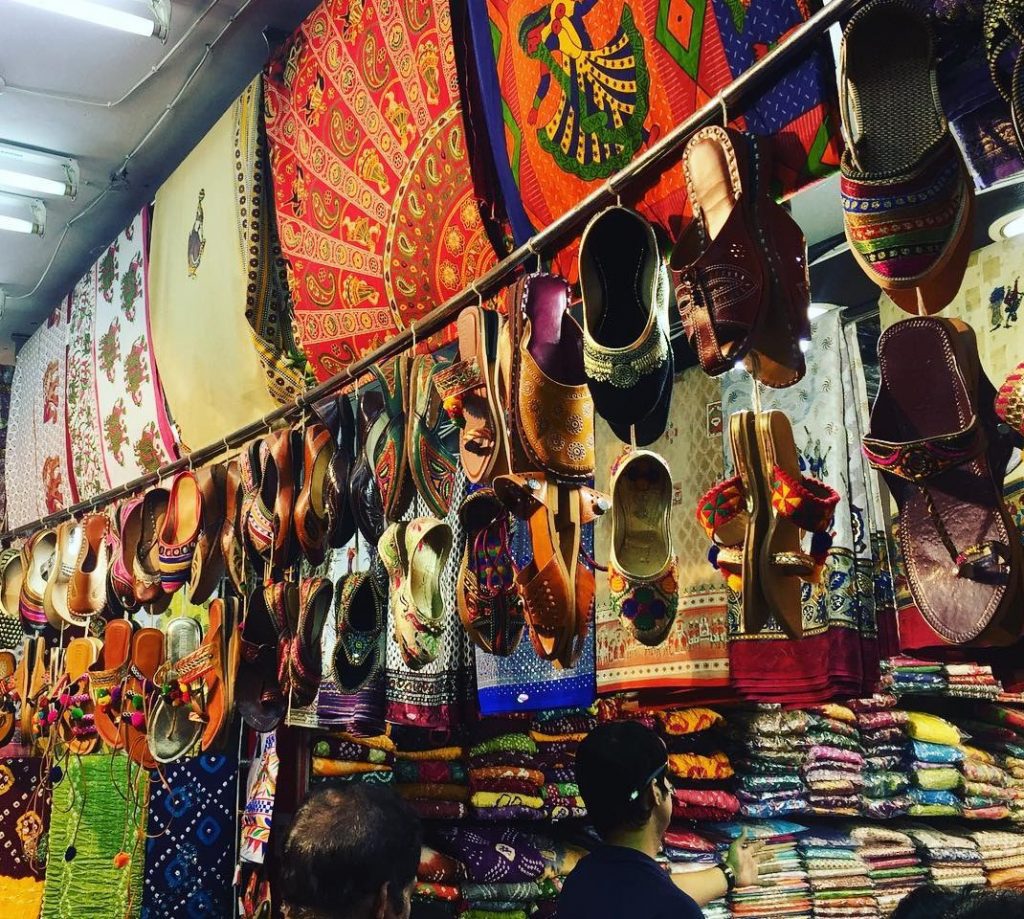 The magnum opus built by Sawai Jai Singh II is a perfect example of the ruler’s penchant for finesse. The breathtaking architecture of the palace gives the tourists a sneak peek into the royal lives of the king and his family. In the current day, a part of the palace is occupied by the present-day king and his family and the remaining area is open for tourists. A nominal entry fee n entry fee of Rs. 10 is charged from the tourists to take a closer look at the architectural wonder of the Rajputs. 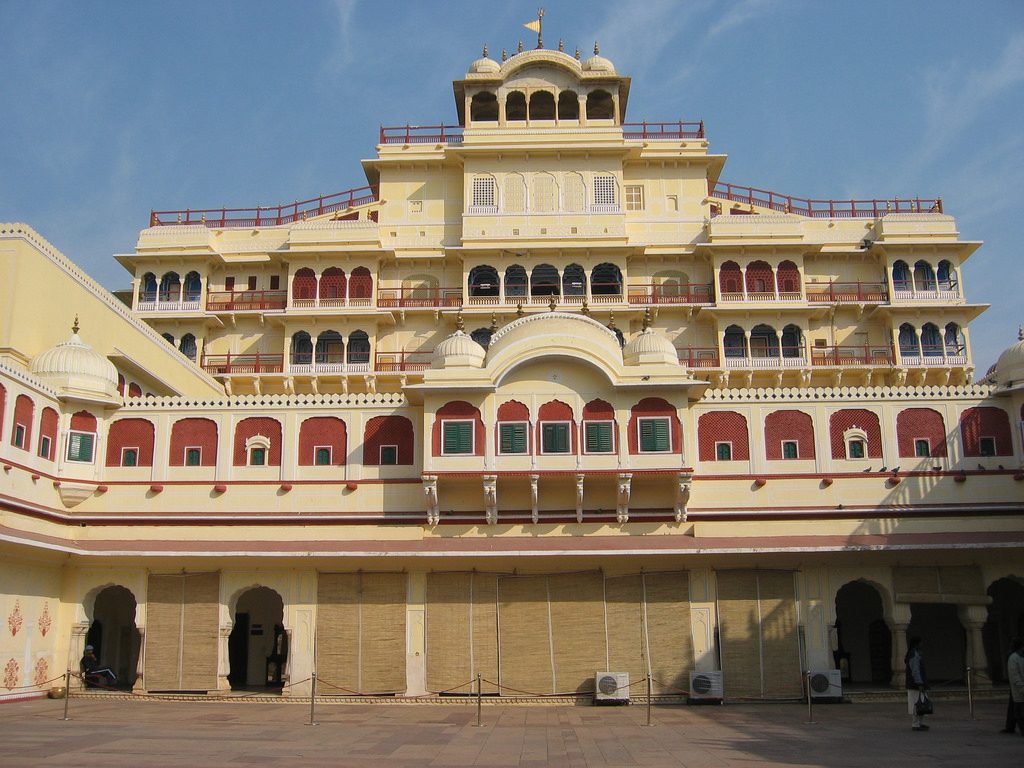 The mighty fort was built by Sawai Jai Singh II as a part of his foolproof defense mechanism against the enemies. One of the most happening spots for local youngsters now, Nahargarh gives a panoramic view of the city.
Entry fee: Rs. 5
Timings: 10am to 10pm
Vehicle entry fee: Rs. 5 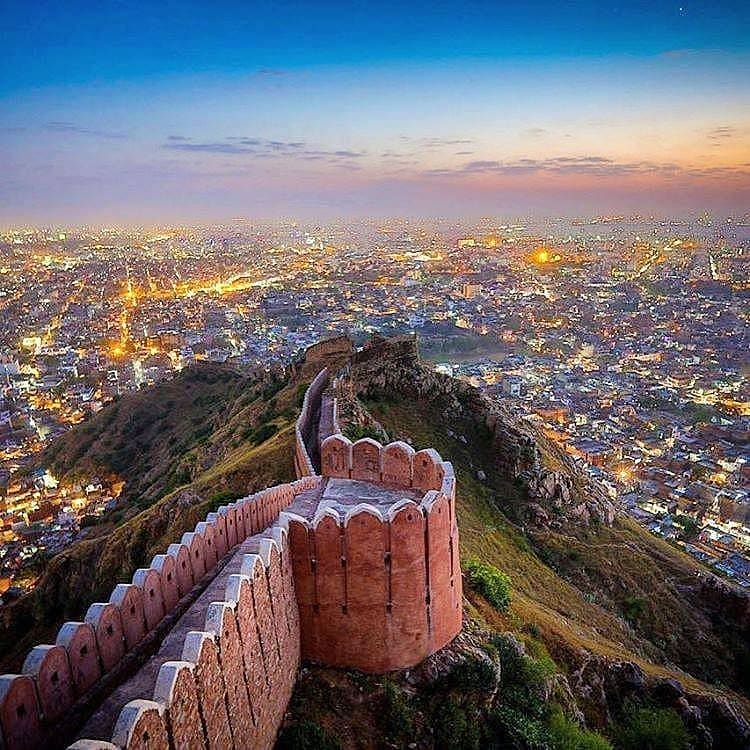 One of the most popular tourist destinations of the city, the sandstone marvel is located about 11 km in the outskirts of Jaipur. The fort is located on a hilltop and has a smooth and easy slope built for the tourists. While there’s an unwrinkled slope for a comfortable drive to the fort, elephant rides are also available at the base for tourists to enjoy the breathtaking view. The palatial fort is spread across 4 floors and each floor has a courtyard. Now a famous tourist spot, this archeological wonder served as the residence for many Rajput kings and their families back in time. 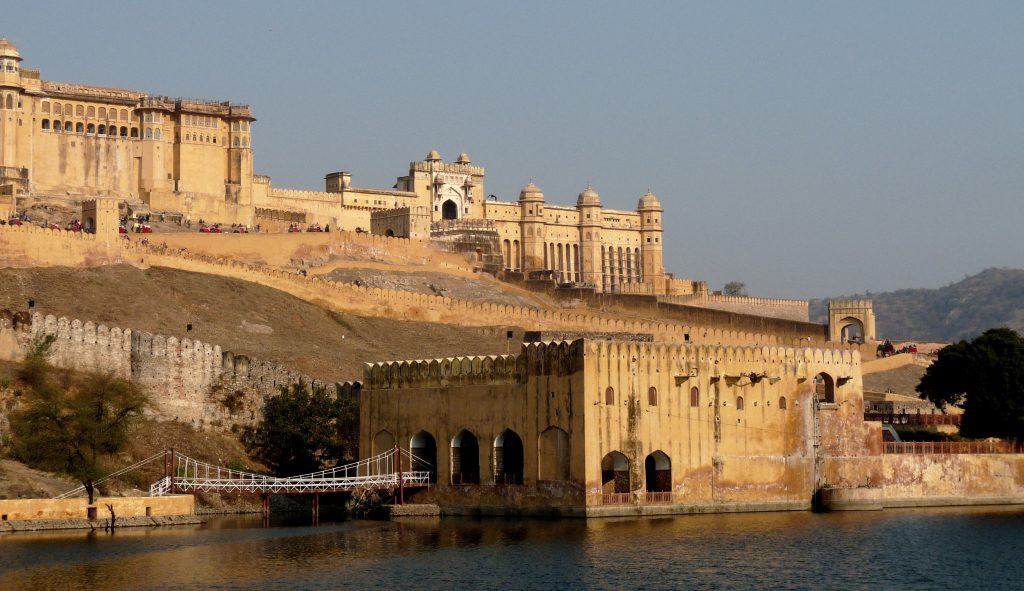 Just like other major parts of the state, Jaipur also experiences extreme climates. Therefore, the winter season, which lasts from November to February, is undoubtedly the best time to visit Jaipur.