My visit to the Kakolem Beach

Every year thousands of tourists from India and abroad arrive in Goa – the country’s party capital. Beaches, cheap booze, water sports, nightlife and much more makes it one of the best places in India to enjoy a memorable vacation with your friends. However, what fascinates me the most about Goa isn’t the buzzing beaches and parties. While central and North Goa are a haven for party animals, nature lovers like me prefer going to the quiet and calm beaches in the south and the little known Kakolem beach was just my kind of place.

It was my fourth trip to Goa and very different from my previous visits. This time I was in the middle of my Delhi to Kanyakumari bike trip and had reached Goa with an objective to visit some of the most unexplored beaches of the coastal state. One beach that particularly caught my attention was the Kakolem beach. I had been to the Cola beach earlier and was simply blown away by the mesmerizing beauty and the untouched sand there. The natural beauty of Cola beach made me look for other similar untouched Goan beaches and that’s when I stumbled upon Kakolem. 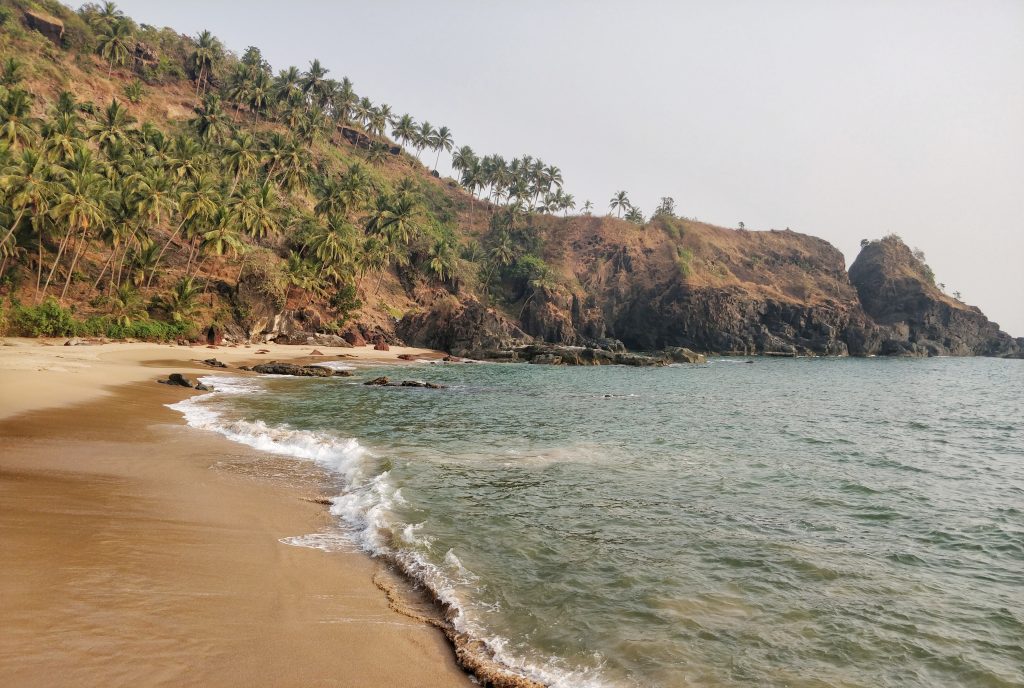 During my research, I did find a few photos of the Kakolem beach and 2-3 travelogues which further increased my curiosity about this place. However, the information I was able to collect was very little. All that I knew was that this beach is located somewhere near the Cola beach and there was a small trek involved to get to this beach. South Goa, trek and very little information online meant that this beach would be clean, have very few visitors and would be relatively untouched – and that was exactly what I was out seeking.

I followed the Google maps from my hostel in Palolem and in around 15 mins, the GPS left me on a lonely road – around a kilometer ahead on the main road from the point where one needs to go-off road to reach Cola beach. There were two dusty trails – the one on my left led to Kakolem beach and the other to Cashewnut plantations. (I know this because I took the right trail with good 2-3 km of off-roading before the road left at a dead end near a temple.)

The off-road towards Kakolem beach passes through a private property and hence visitors are required to pay Rs 100 as an entry charge. However, for some reason, the barricade was open and there was nobody there to collect money. Probably, the tourist influx so was so low that they had left the entry gate unmanned. I went off-road on my bike for about half a kilometer to reach the parking spot.

The vast ocean and the beautiful beach below was clearly visible from the point where the bikes and other vehicles were parked. 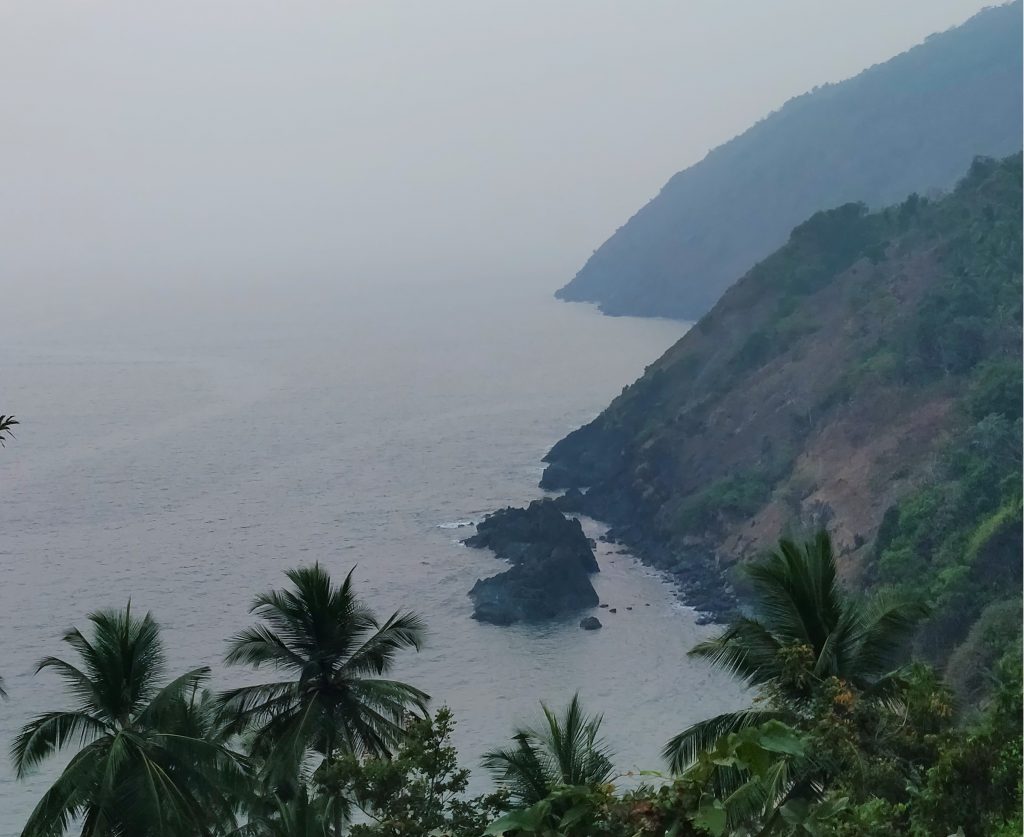 An aerial view of the beach from the parking lot

There are a series of stairs you need to descend down in order to reach the beach. After around 5-10 mins of walking down the stairs, I finally reached Kakolem only to be awe-struck by the aquamarine green waters of the endless sea with pristine surroundings. It was definitely the most secluded and beautiful beach in Goa I had ever been to. 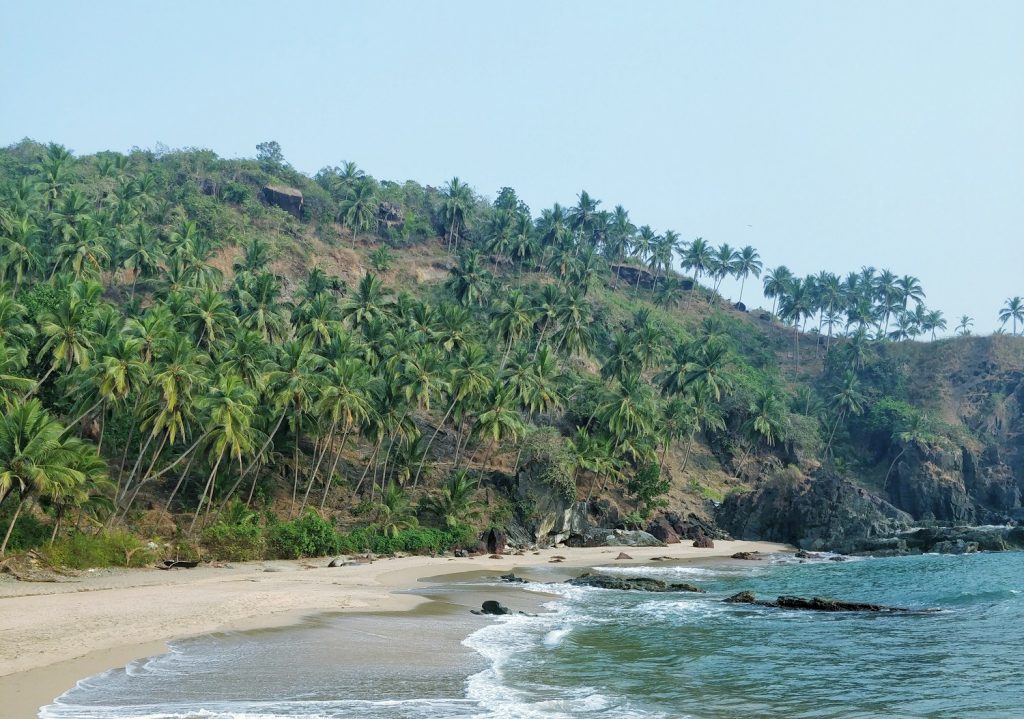 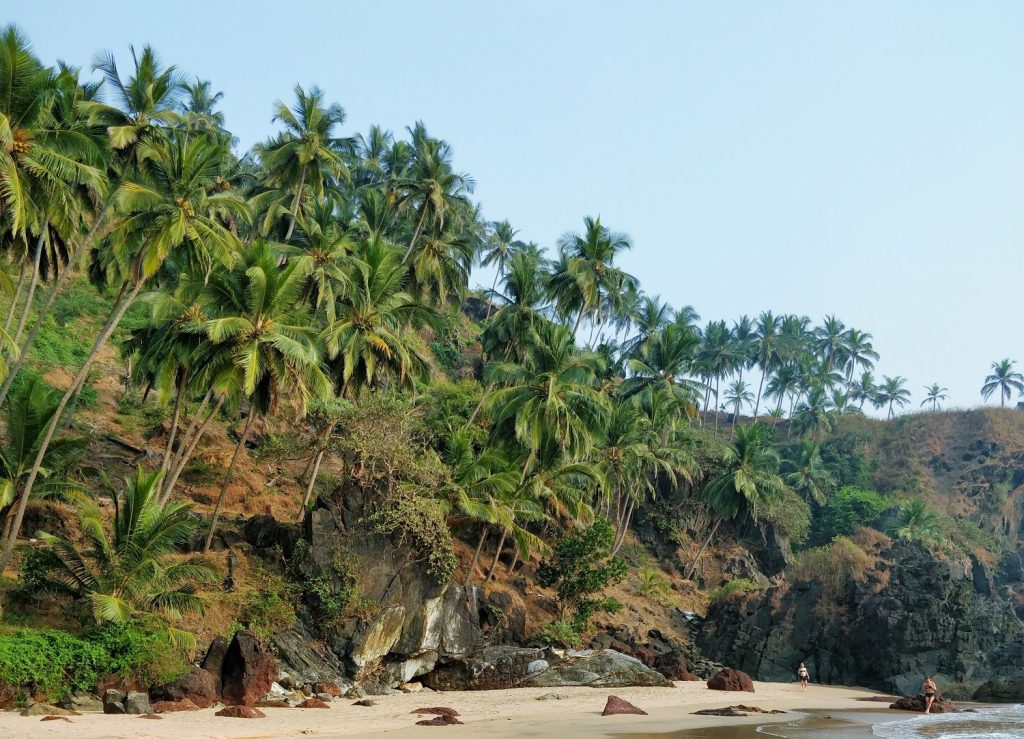 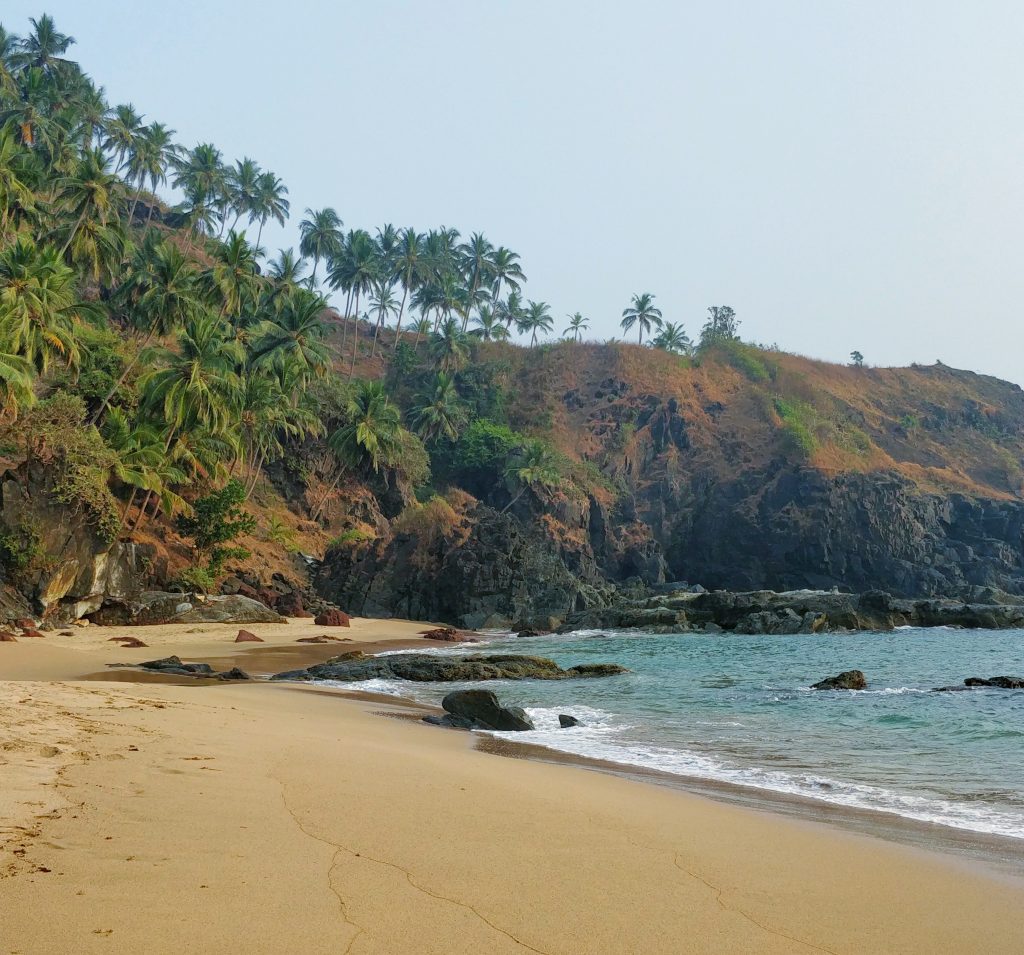 There were just 3 visitors on the beach when I reached Kakolem. The only beach hut and restaurant on the beach had no guests either. For a long time after the 3 visitors left, I was the sole person on the beach beside the two people working at the beach shack. It was in this solitude that I enjoyed one of the most beautiful sunsets I have ever witnessed.

The Sunset at Kakolem Beach

As it turned dark, I left the place and reached my hostel in Palolem. The next day I left for Cola Beach, my favourite beach in Goa before I had seen Kakolem. I was visiting the place after almost a year and was surprised to see a number of beach shacks along Cola. There were just 2 beach shacks on my first visit to Cola around a year back but now the number had gone up to around 6-7. Another secluded and beautiful place in Goa was witnessing commercialization. I only hope that Kakolem doesn’t meet the same fate and it remains a place where only a handful of nature lovers visit.

Here’s my quick guide to explore the Kakolem Beach:

I personally think that Cola and Kakolem beaches are the most beautiful beaches of Goa I have been to. It’s unlike other Goan or Indian beaches with a very little crowd, pristine sands, and clean waters.

Kakolem is located in one of the quieter corners of South Goa. The best way is to follow the GPS which leads you to the start of the off-road before this beach. From that point, take the dusty trail on your left to reach the parking. You can see the vast ocean at a distance from the parking.

Kakolem isn’t one of the bustling beaches of Goa. There’s just one beach shack where you can have a drink or two and food. Besides this, there’s nothing commercial here. The waters here are clean but dangerous. Visit this place only if you want to simply sit, relax, chill and enjoy the exquisite untouched beauty. Most of the mobile networks and Internet don’t work here.

– Swimming in the waters of Kakolem beach would be extremely dangerous. Avoid that.

– The sunset here is beautiful. You shouldn’t miss that, however, staying here after dark isn’t advisable.

– Cola Beach and Fort Cabo De Rama are two other places close to Kakolem beach that you shouldn’t miss.