Probably the best footballer playing today and one of the greatest players of all time, Lionel Messi is a name loved and worshiped by millions across the globe today. The Argentine professional footballer has an unparalleled feat winning six Ballon d’Or awards and six European Golden Shoes – both records! With over 700 senior career goals for the Club and country, Messi’s playing style and game has earned the praise of his contemporaries, former legends and fans.

We bring you the best Lionel Messi quotes that show why Messi is simply the best!

1. “Don’t write about him, don’t try to describe him, just watch him.”
– Pep Guardiola on how it’s a treat to watch Messi 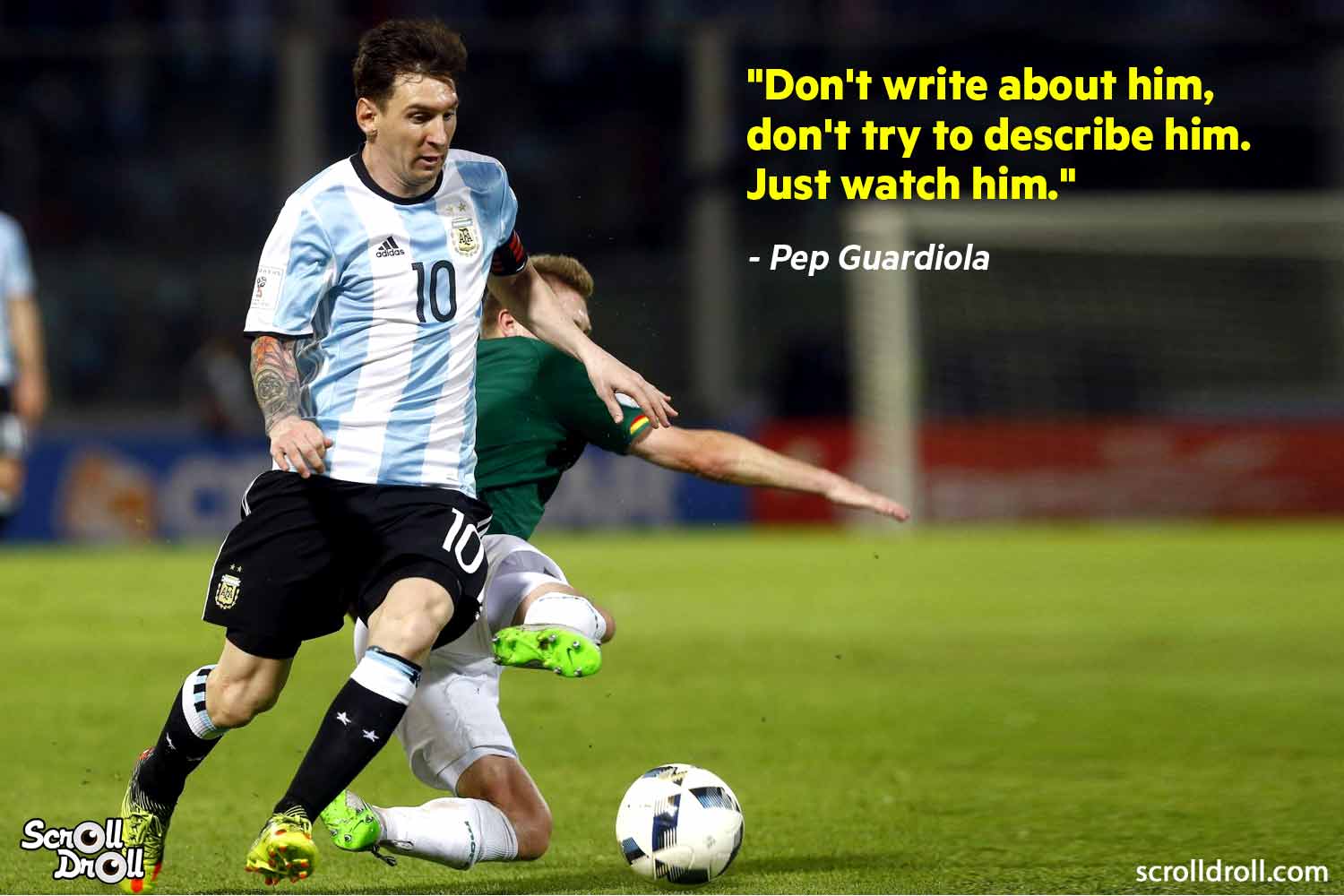 2. “Is Messi a real player or a PlayStation character?”
– Radamel Falcao on how Messi does the impossible 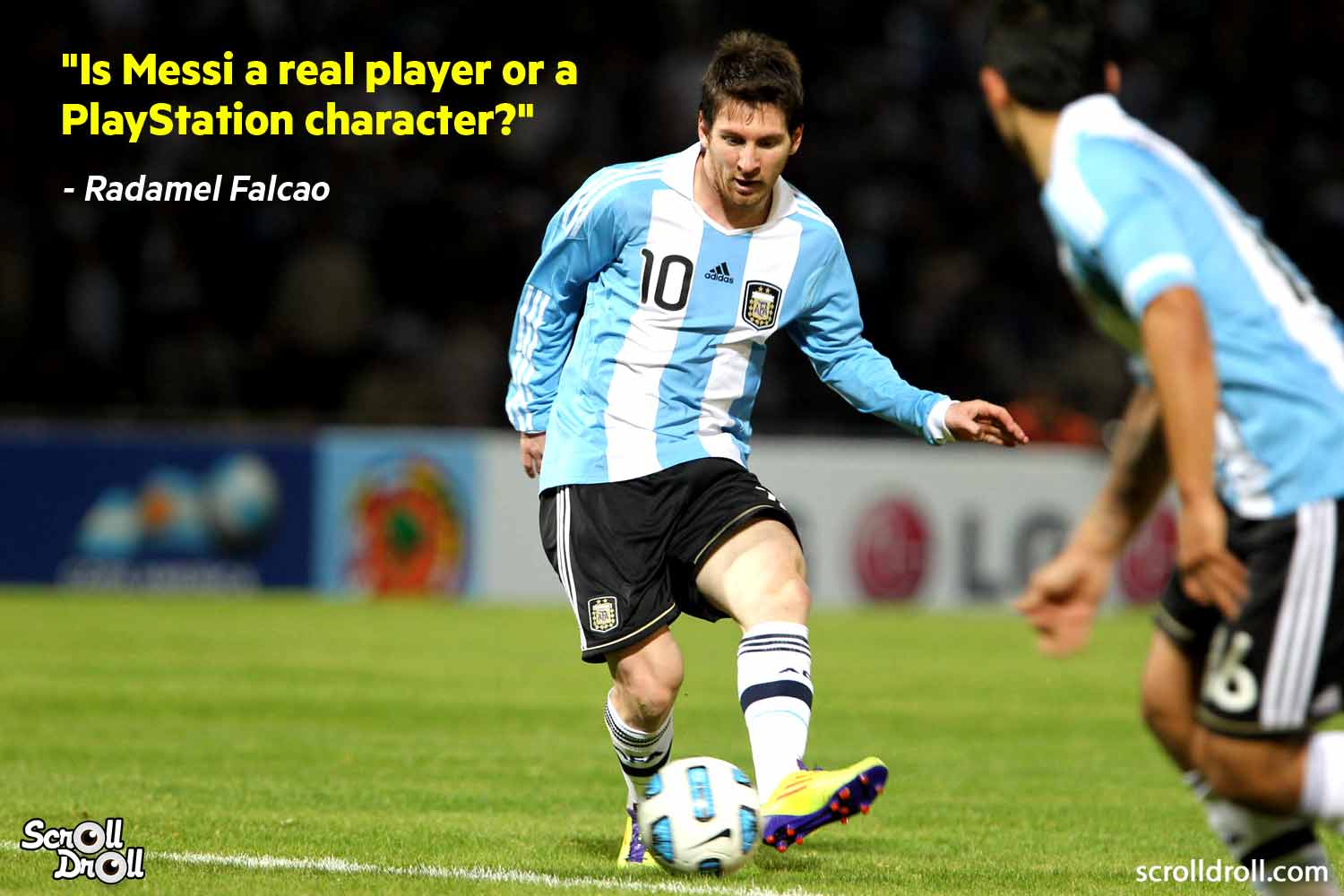 3.“I wear the number 10 Jersey for the US National Team in honour of the Greatest athlete I have ever seen: Messi.”
– Kobe Bryant – American professional basketball player on how it’s an honor to wear the same Jersey number for a short span in his career as Lionel Messi. 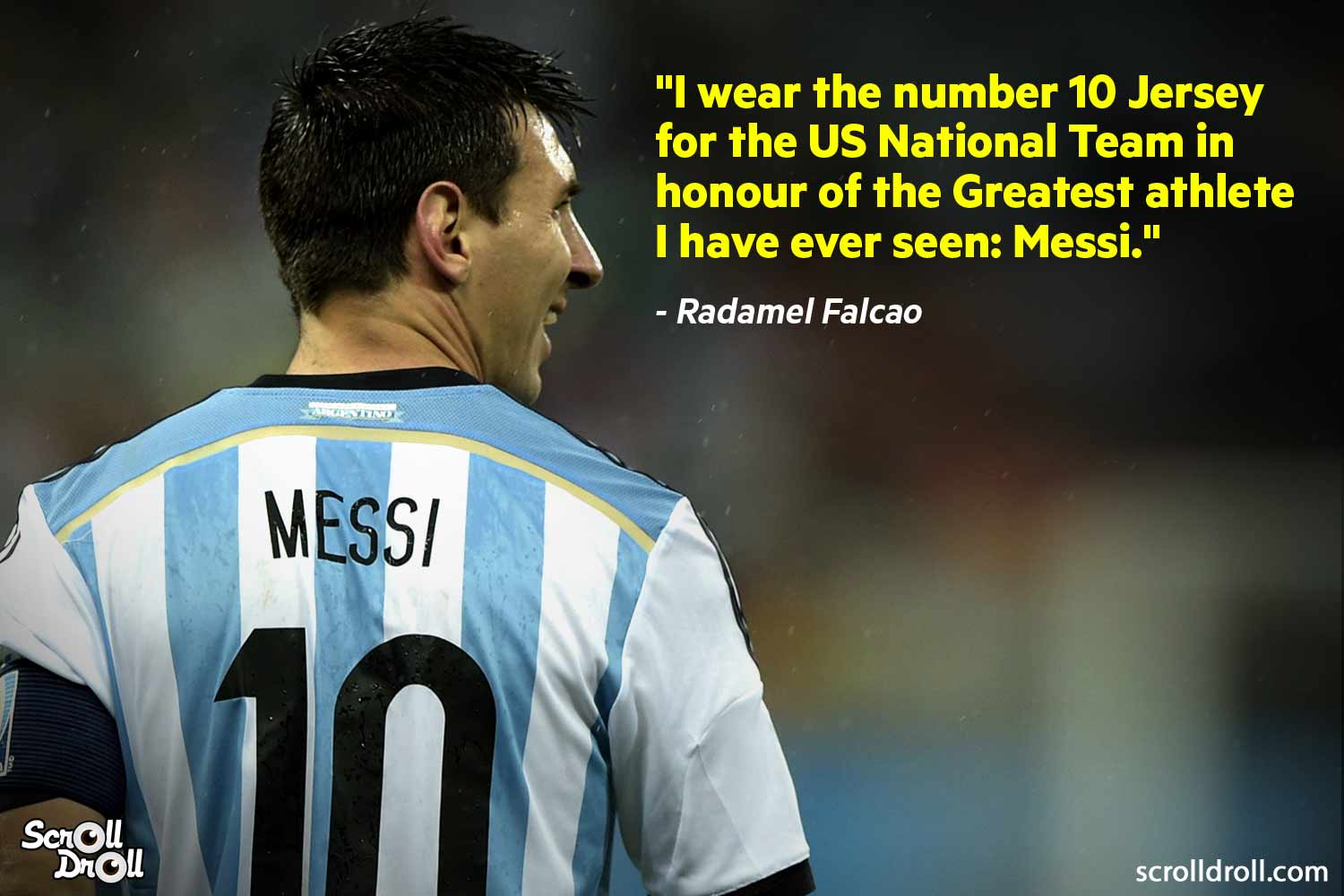 4. “Messi has a divine gift.”
– Dani Alves, The captain of the Brazil National Team on the way Messi plays 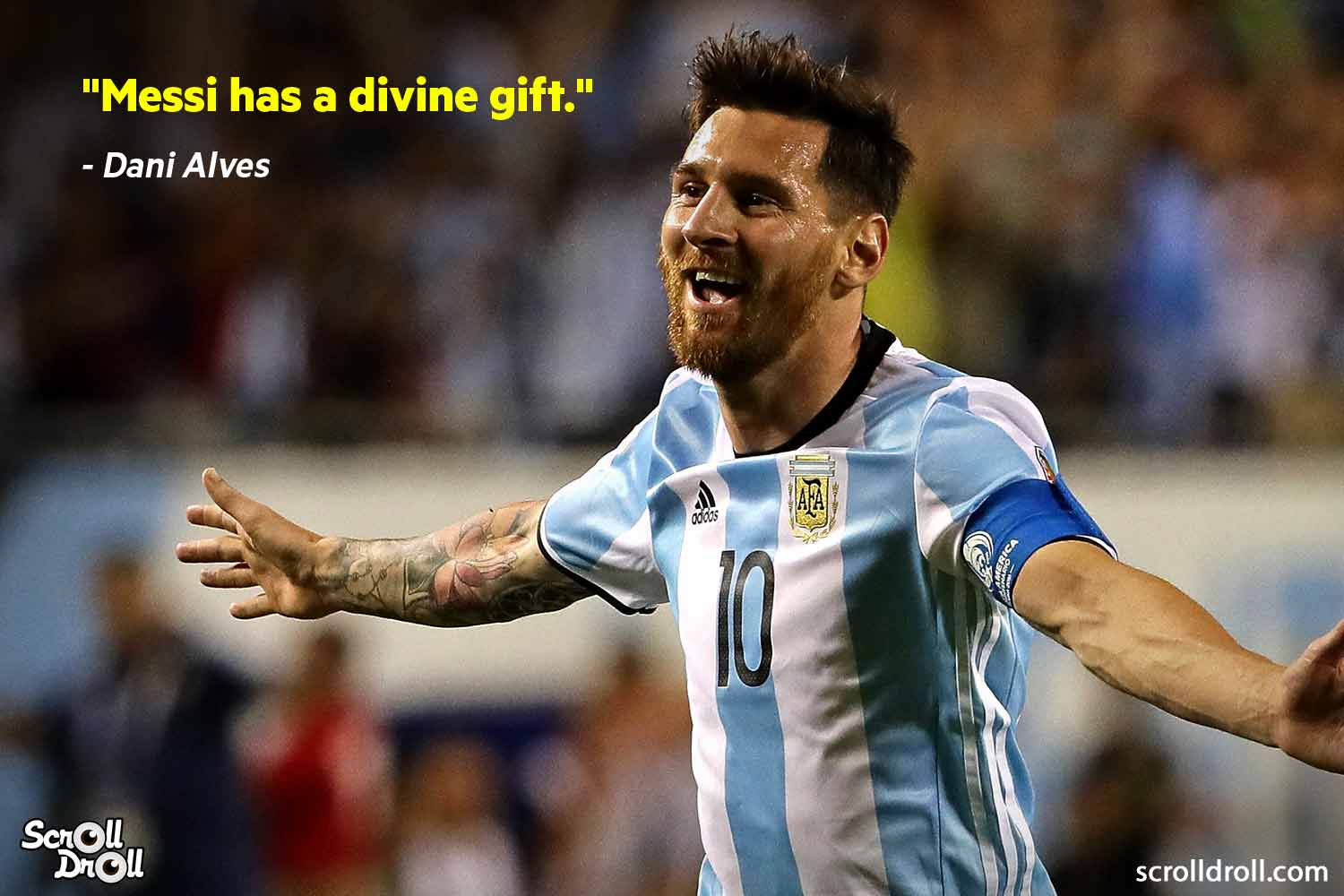 5. “It feels good to be in the same generation as him. I believe he’s the best player in the history of the sport.”
–  Gerals Pique, the Spanish professional footballer and the centre-back for Barcelona on Lionel Messi 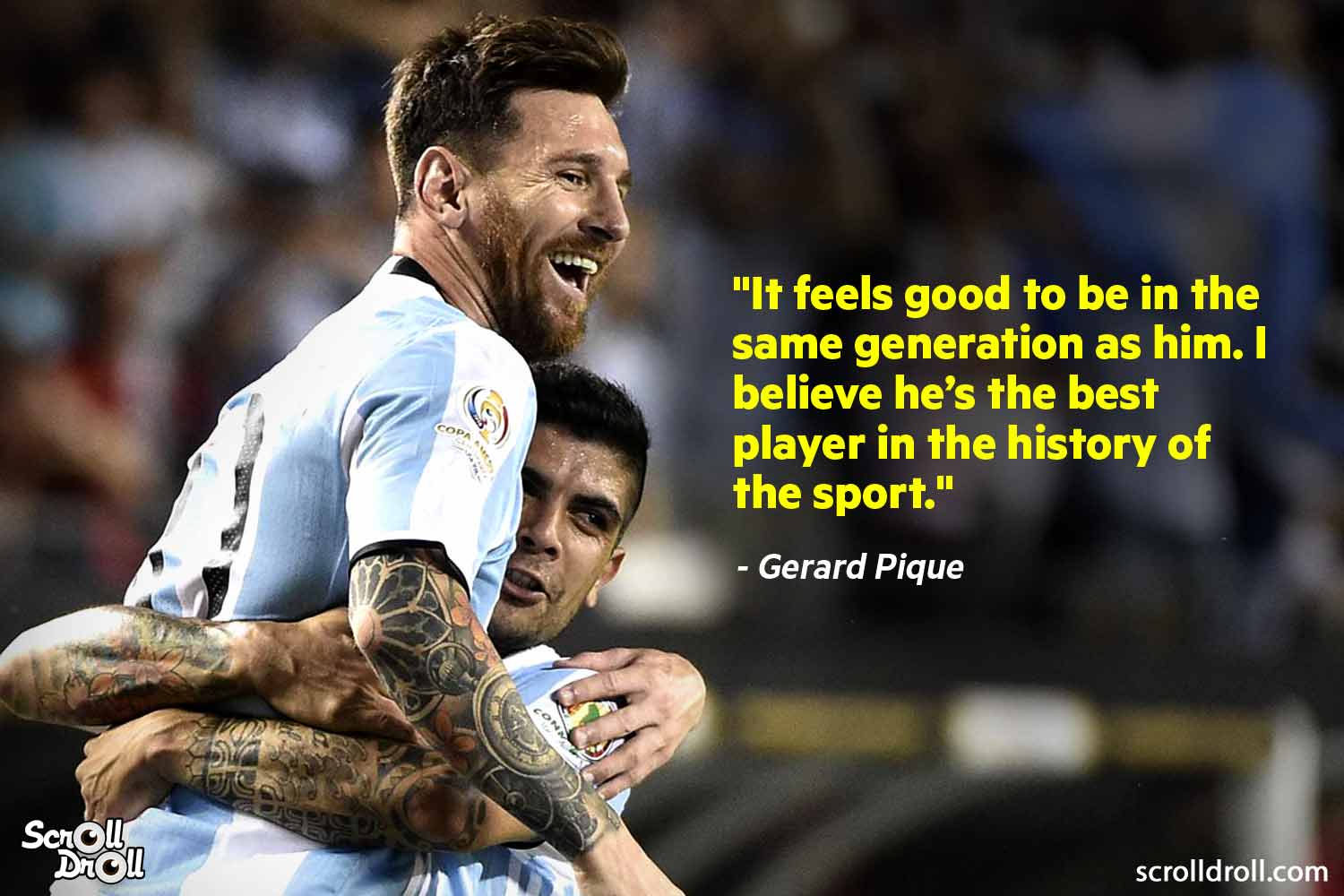 6. “Messi or Ronalso best player in the world? In the world, I would say Ronaldo. Messi is from another planet.”
– Turkish International Arda Turan 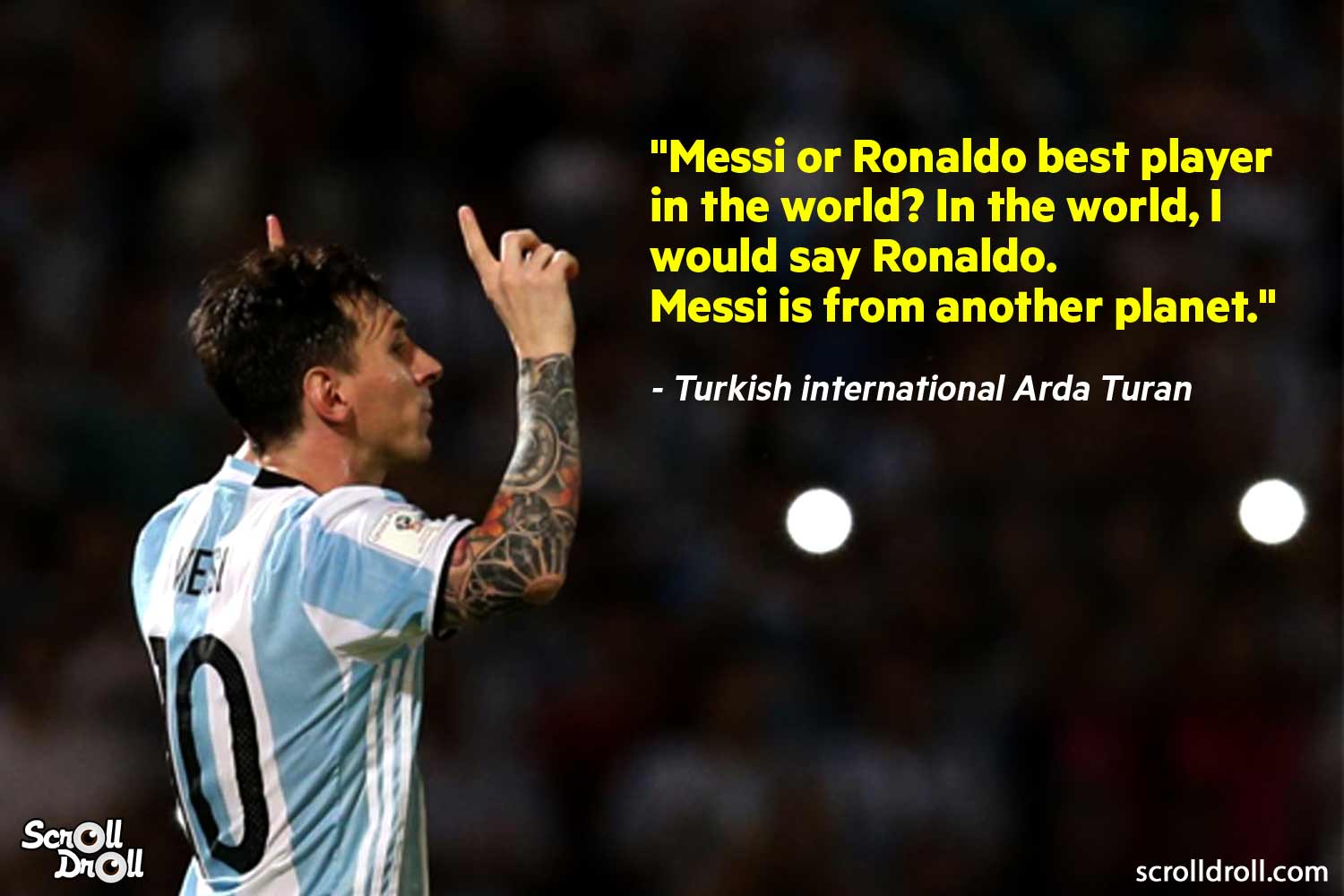 7. “I like Messi a lot, he’s a great player. Technically, we’re practically at the same level.”
– Brazil legend  & FIFA Player of the Century Pele describing Lionel Messi as the most complete player 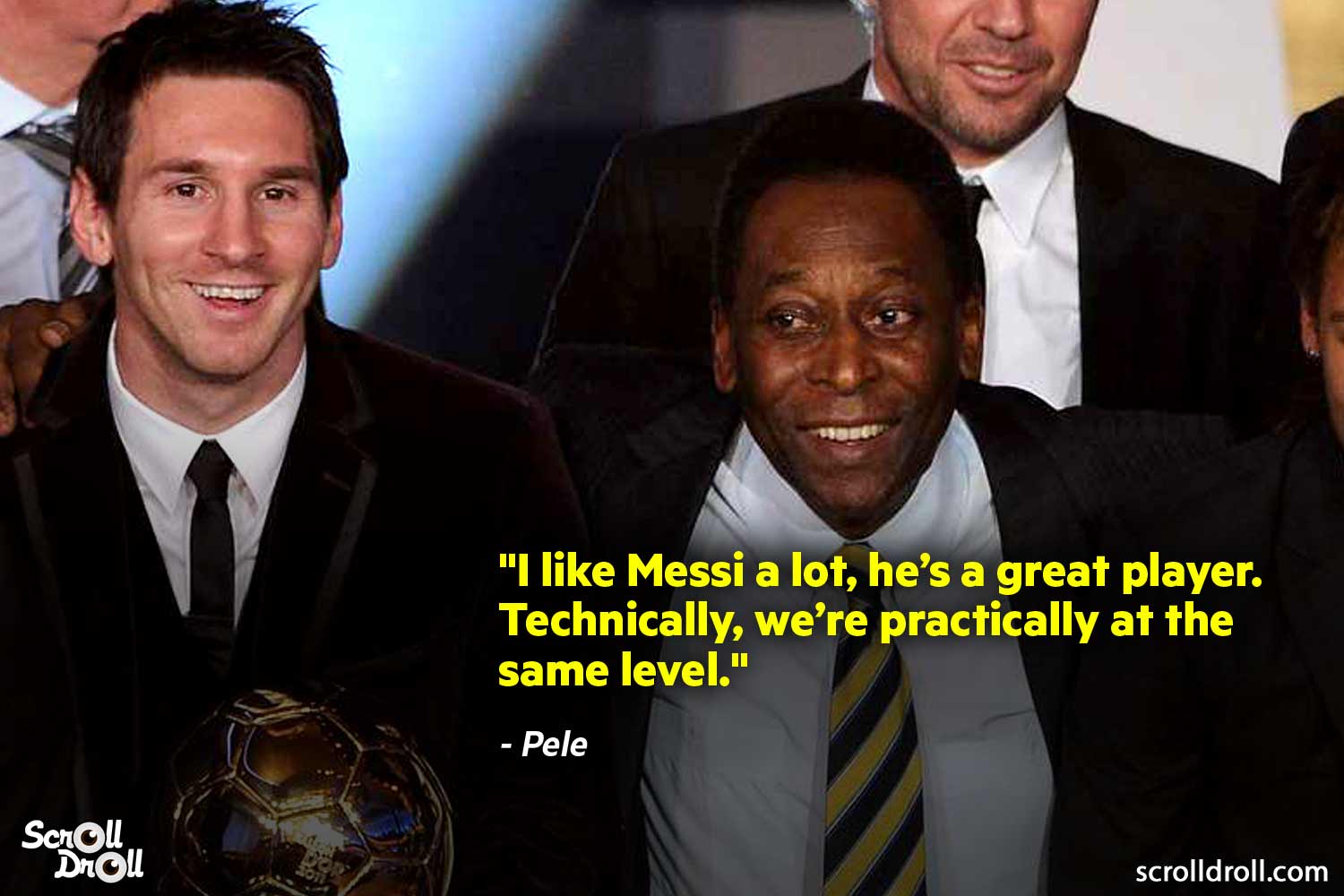 8. “I have seen the player who will inherit my place in Argentine football and his name is Messi. Messi is a genius.”
– Diego Maradona, another Brazilian legens & FIFA Player of the 20th Century on the legend of Messi 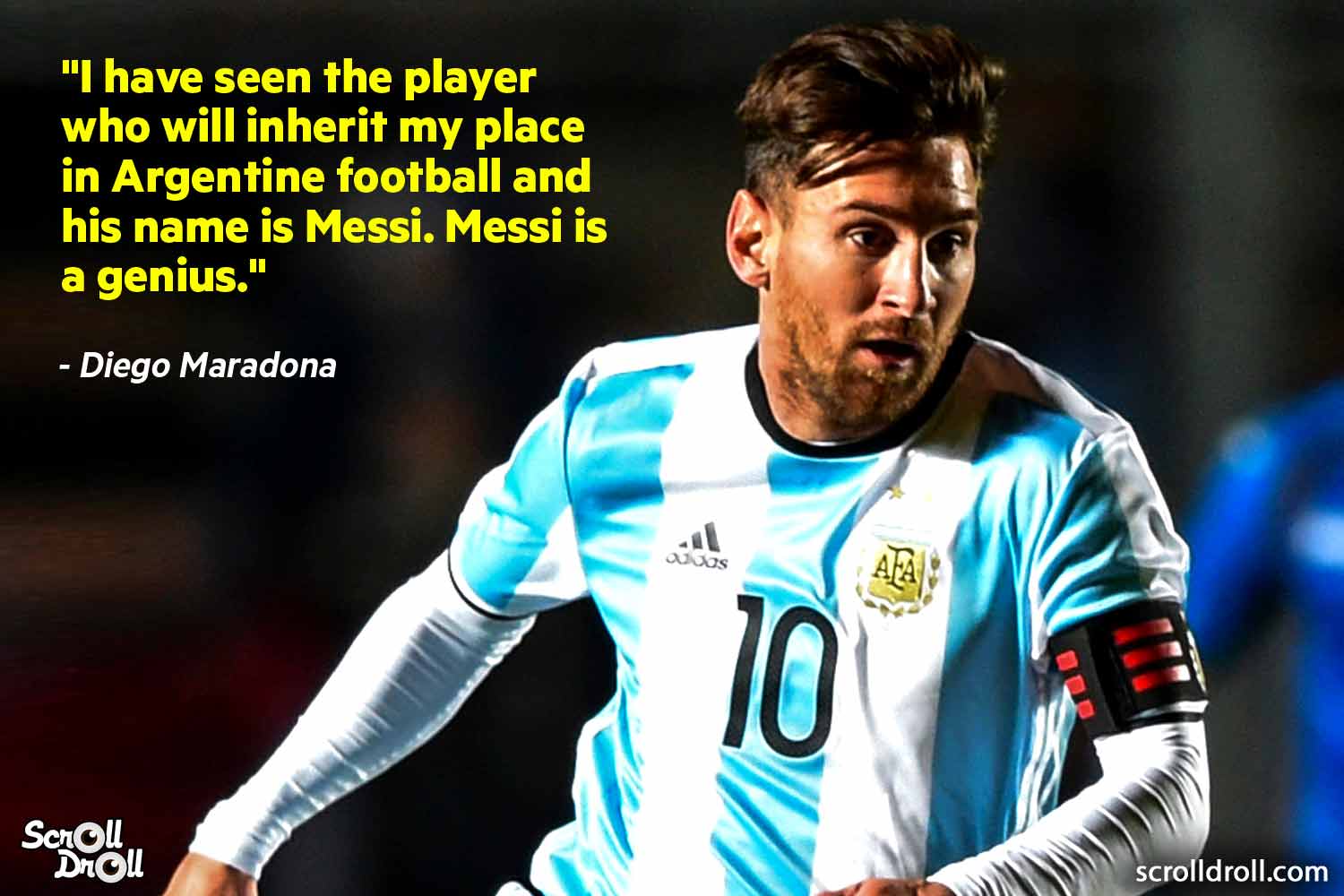 9. “There is no doubt, you’re from another galaxy. Thanks Leo.”
– Maxi Rodriguez, another Argentine Footballer on his team mate. 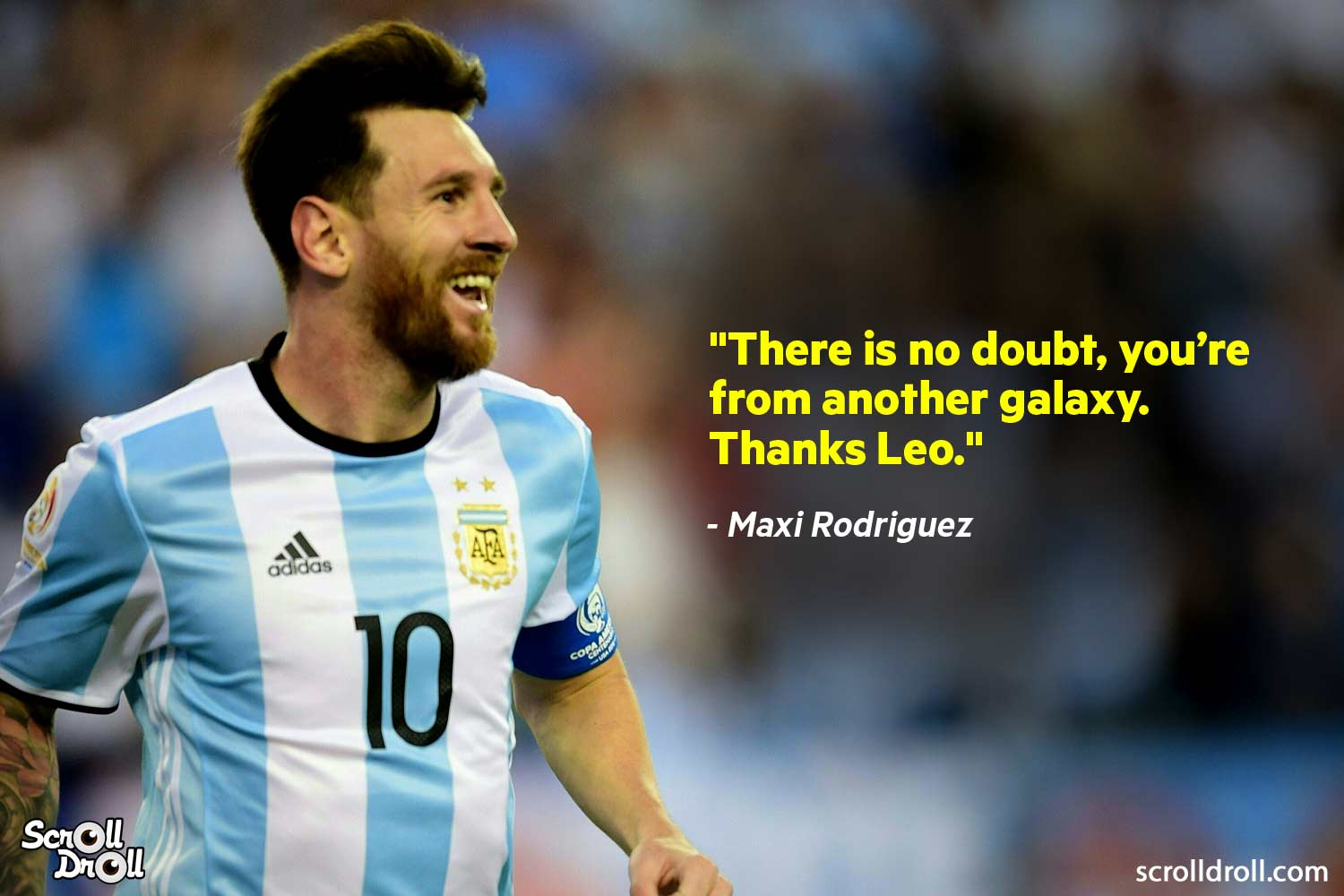 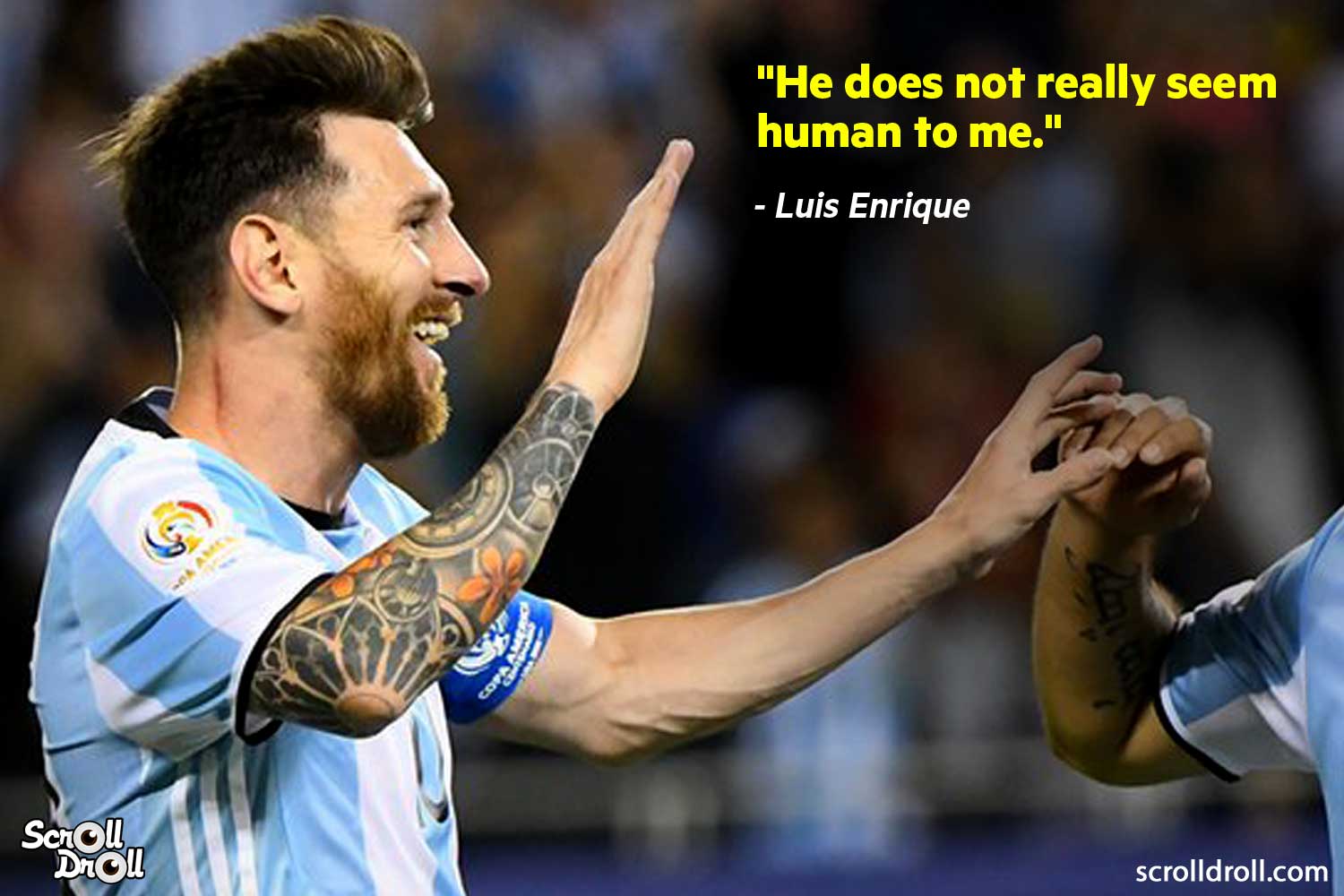 11. “Although he may not be human, it’s good that Messi still thinks he is.”
– Javier Masherano on the super human acts by Messi on the field. 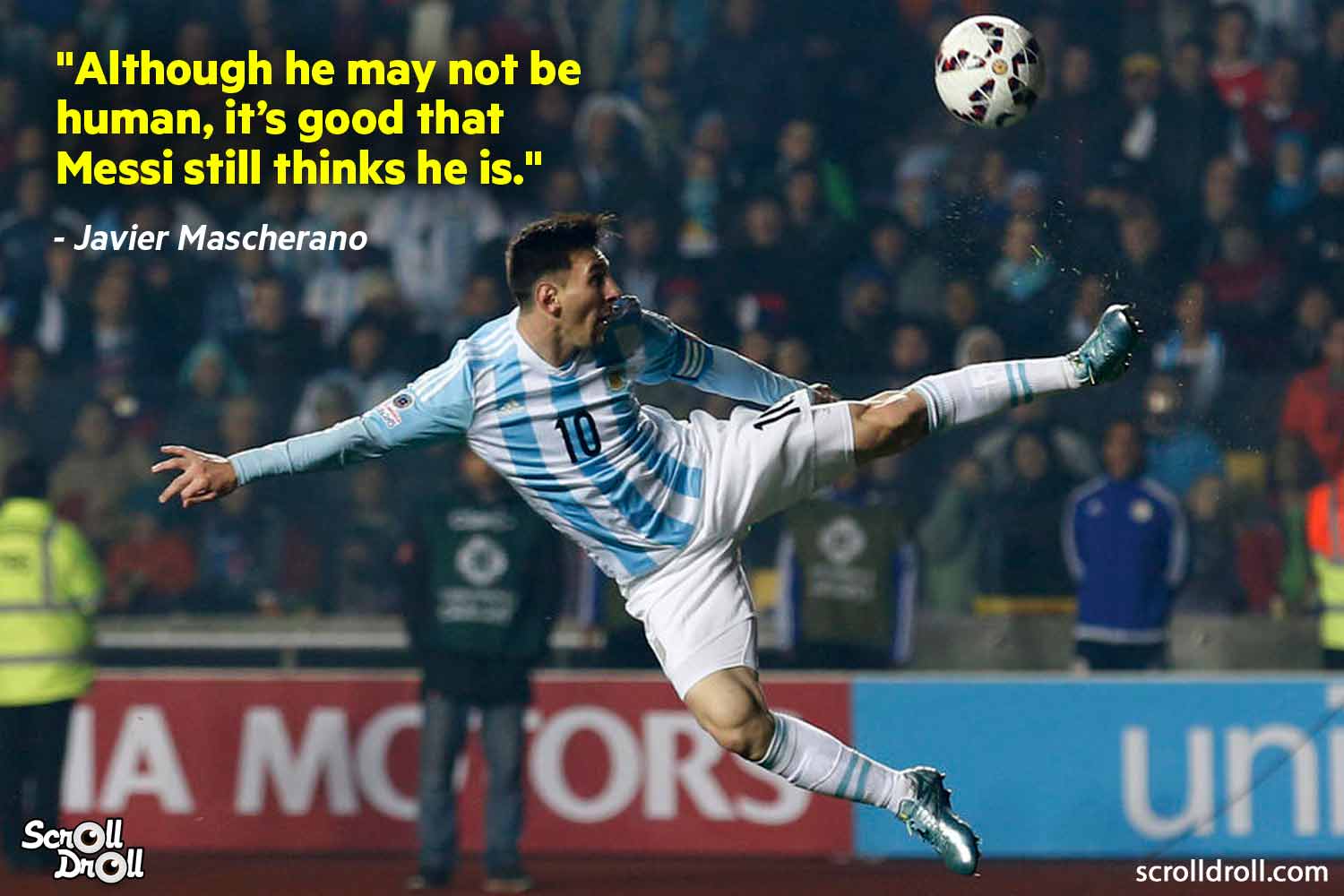 12. “Once they said they can only stop me with a pistol. Today you need a machine gun to stop Messi.”
– Hristo Stoichkov, One of the greatest Bulgarian footballers on how you can stop Messi 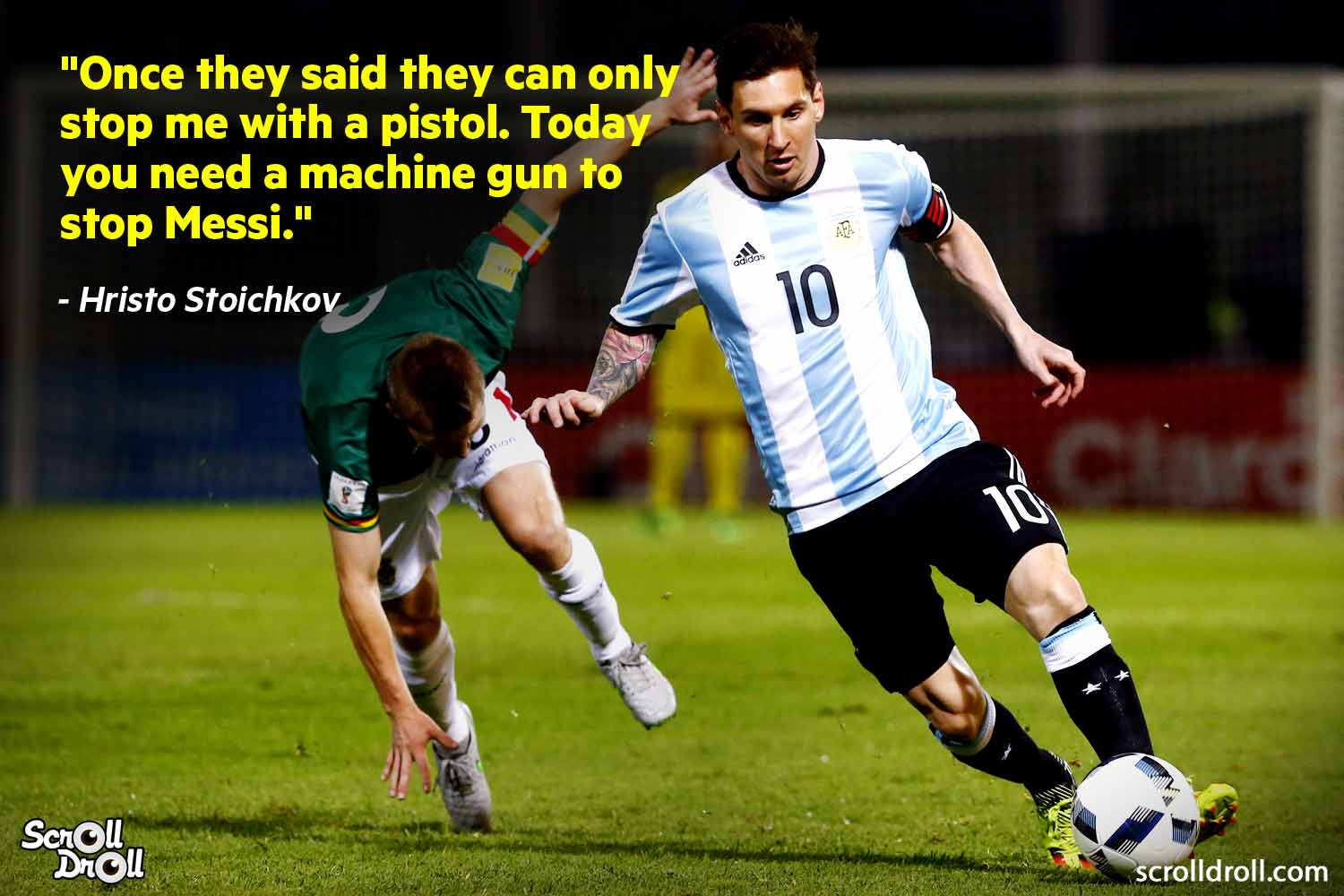 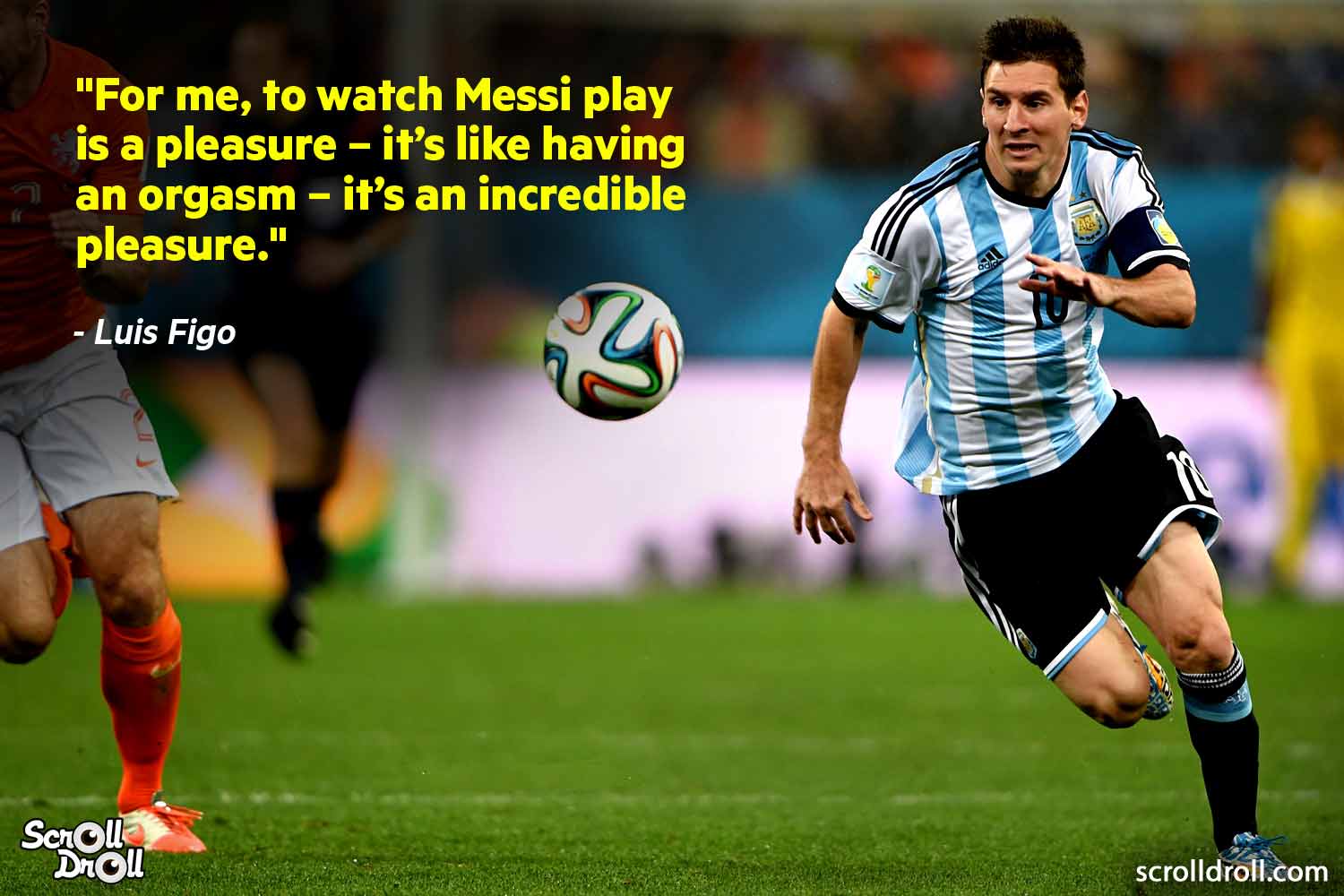 14. “There are 3 to 4 important things in life: books, women….and Messi.”
– The renowned Portuguese novelist António Lobo Antunes on Lionel Messi 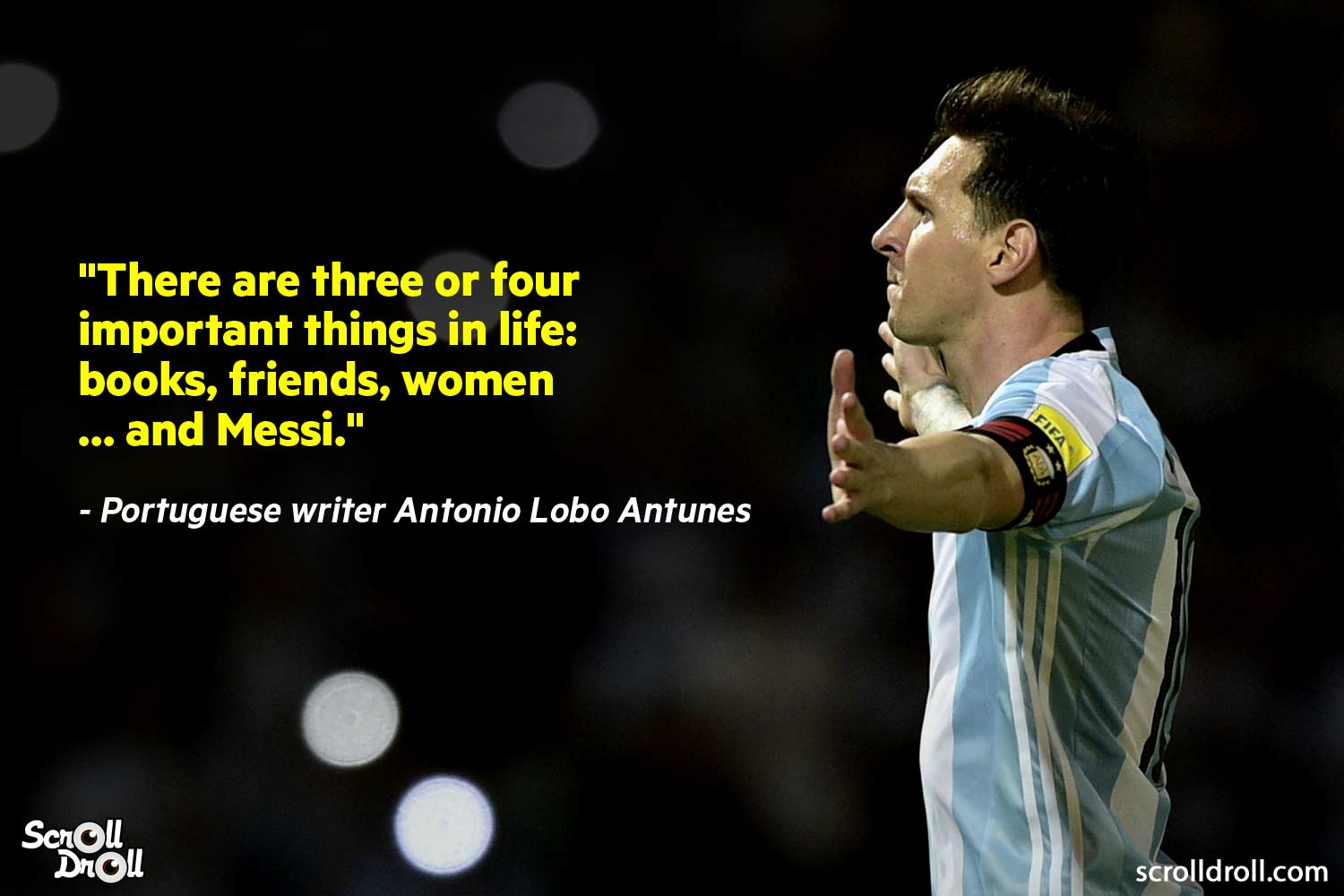 15. “He is always going forwards. He never passes the ball backwards or sideways. He has only one idea, to run towards the goal. So as a football fan, just enjoy the show.”
– Zinedine Zidane, the former French Captain on Messi’s grand show on the field. 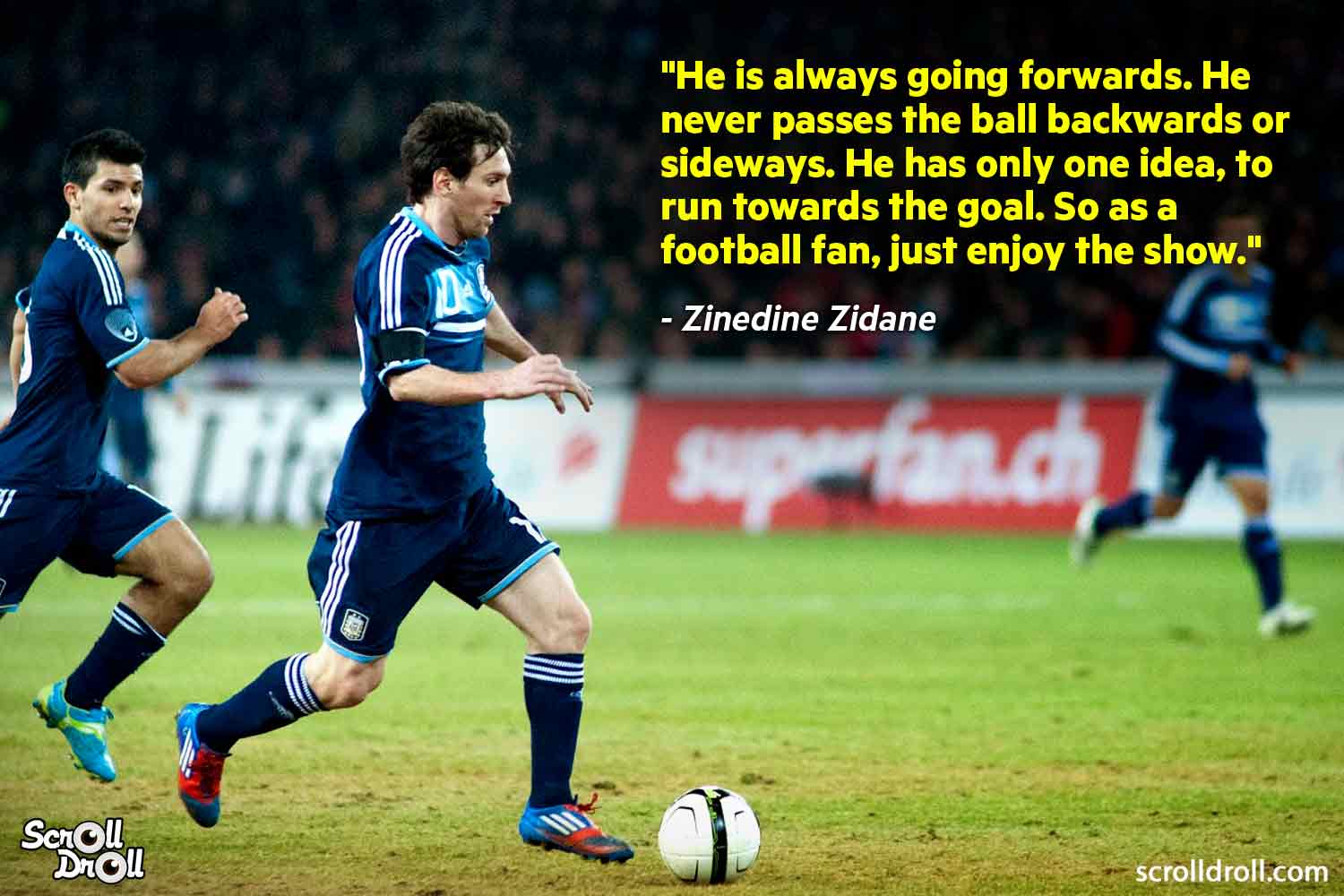 The son of a steel worker (father) and a cleaner, Lionel Messi’s story and capabilities has been a source of inspiration of millions of sportsmen and other people across the world who wish to realize their dream. He wish he continues to entertain his fans and create new records.

Did we miss on your favourite Lionel Messi quote? Do let us know in the comments below!