Lucknow, the capital of Uttar Pradesh, lies in the middle of the Heritage Arc. This bustling city, famed for its Nawabi era finesse and amazing food, is a unique mix of the ancient and the modern. It is home to extraordinary monuments depicting a fascinating blend of historical, colonial and oriental architecture. 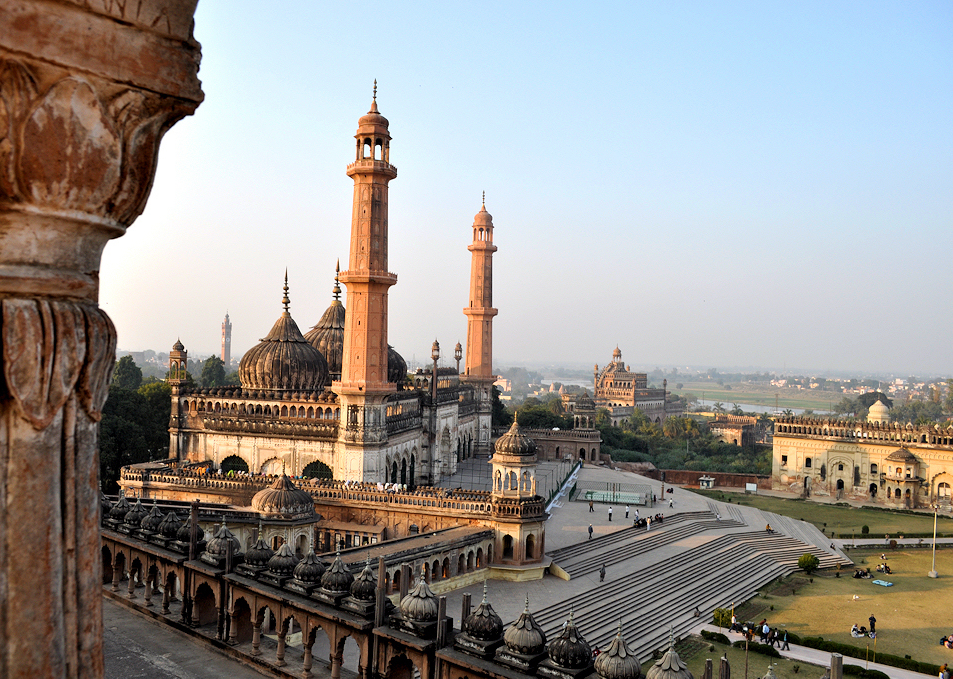 The capital to the state of Uttar Pradesh and its largest city, Lucknow has always been known as a multicultural city that flourished as a north Indian cultural and artistic hub. It continues to be an important centre of governance, administration, education, commerce, culture and arts.

From 1350 onwards, Lucknow and parts of the Awadh region were ruled by the Delhi Sultanate, Mughal Empire, Nawab Of Awadh, the British East India Company and the British Raj. The Nawabs of Lucknow, in reality, the Nawabs of Awadh, acquired the name after the reign of the third Nawab when Lucknow became their capital.

The city became North India’s cultural capital, and its nawabs, best remembered for their refined and extravagant lifestyles, were patrons of the arts. Under their dominion, music and dance flourished, and construction of numerous monuments took place. Of the monuments standing today, the Bara Imambara, the Chota Imambara, and the Rumi Darwaza are notable examples. One of the Nawab’s enduring legacies is the region’s syncretic Hindu–Muslim culture that has come to be known as the Ganga-Jamuni Tehzeeb.

It is owing this glorious past that the city of Lucknow is popularly known as the The City of Nawabs. It is also known as the Golden City of the East, Shiraz-i-Hind and The Constantinople of India.

Location & How to Reach?

Situated in the middle of the Indo-Gangetic plains, the city is surrounded by rural towns and villages. To the east lies Barabanki, to the west Unnao, to the south Raebareli, while to the north lie the Sitapur and Hardoi. Lucknow city is located in a seismic zone.

Nearest Railway Station: Lucknow railway station is one of the two main railway stations of Lucknow city, other one is Lucknow Jn. Both are at a distance of 3 km and 4.8 km from the main city, respectively.
Nearest airport: Chaudhary Charan Singh International Airport also known as Lucknow Airport is about 30 mins from the main city which makes it at a distance of 12km.

Getting Around In The City

Autorickshaws, Buses, Hand-driven rickshaws and now, metro are the most commonly used public transport owing to its convenience.

Things to Do & Places To Visit In Lucknow

Also known as the Asafi Imambara, was constructed by Nawab Asaf-Ud-Daula in 1786-91 and is one of the architectural wonders of that era. Its central hall is said to be the largest vaulted chamber in the world. It is now used by Shia Muslims for the purpose of Azadari. A staircase from outside leads to a series of labyrinths known as Bhool-Bhulaiyan, which is a complicated entanglement of zig-zag passages. Visitors are advised to visit only with authorised guides. Within the compound of the Imambara is the grand Asafi Mosque and Shahi Baoli, which is another attraction. 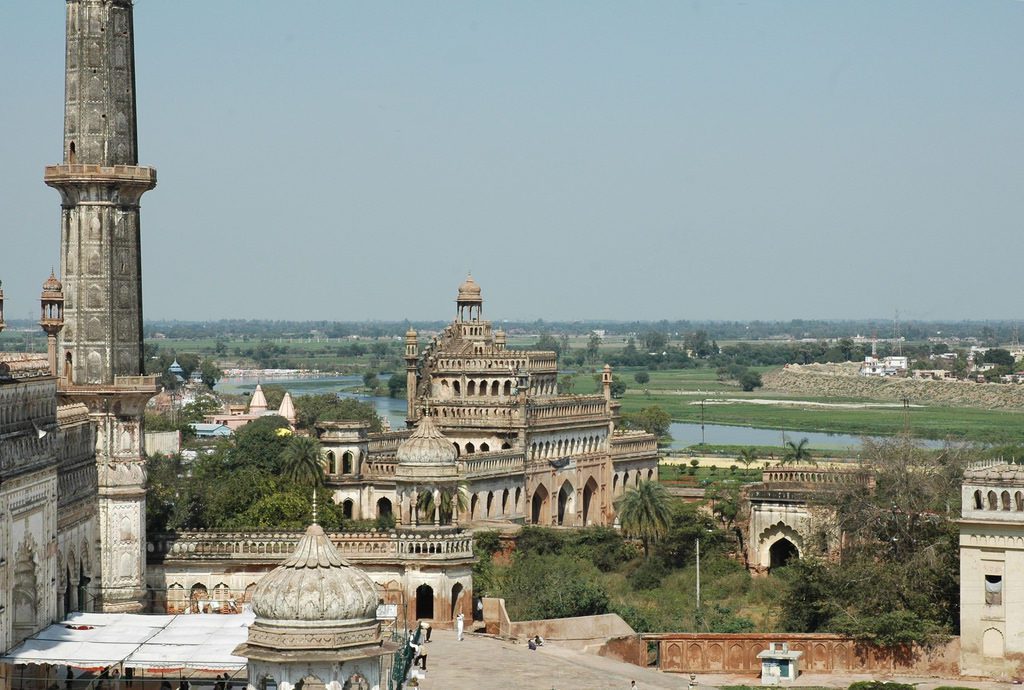 The Chhota Imambara also known as Hussainabad Imambara stands to the west of Bara Imambara and was built by Nawab Muhammad Ali Shah (1837-42). It is more ornate in design with gilded dome, several turrets, exquisite chandeliers said to be brought from Belgium, gilt-edged mirrors and colourful stuccos which adorn the interiors.

The tombs of Muhammad Ali Shah and other members of his family are inside the Imambara. A golden dome and fine calligraphy on the exterior of the building makes it truly exceptional monument of Mughal architecture. It is decorated and lit up during special occasions. 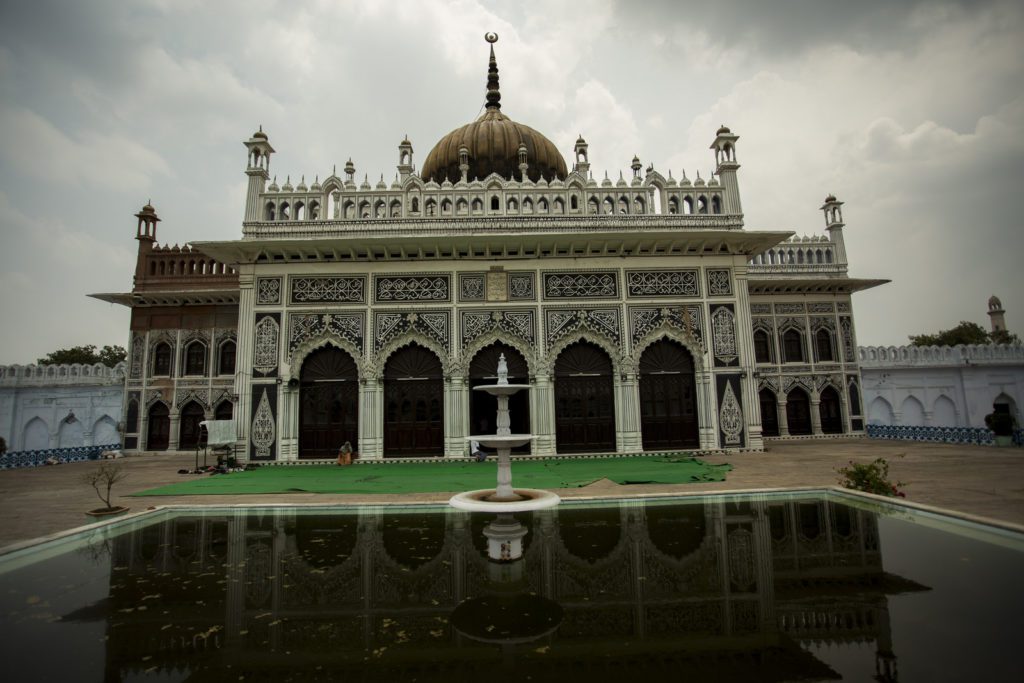 Constructed by Mayawati, chief minister of Uttar Pradesh during her administrative rule, Ambedkar park honors the lives and memories of Dr. Bhimrao Ambedkar who devoted his life to humanity, equality and social justice.

The entire memorial is built using red sandstone brought from Rajasthan and is situated in the posh locality of Gomti Nagar, the largest planned residential colony in India. Cost of the memorial is estimated at 7 billion rupees. 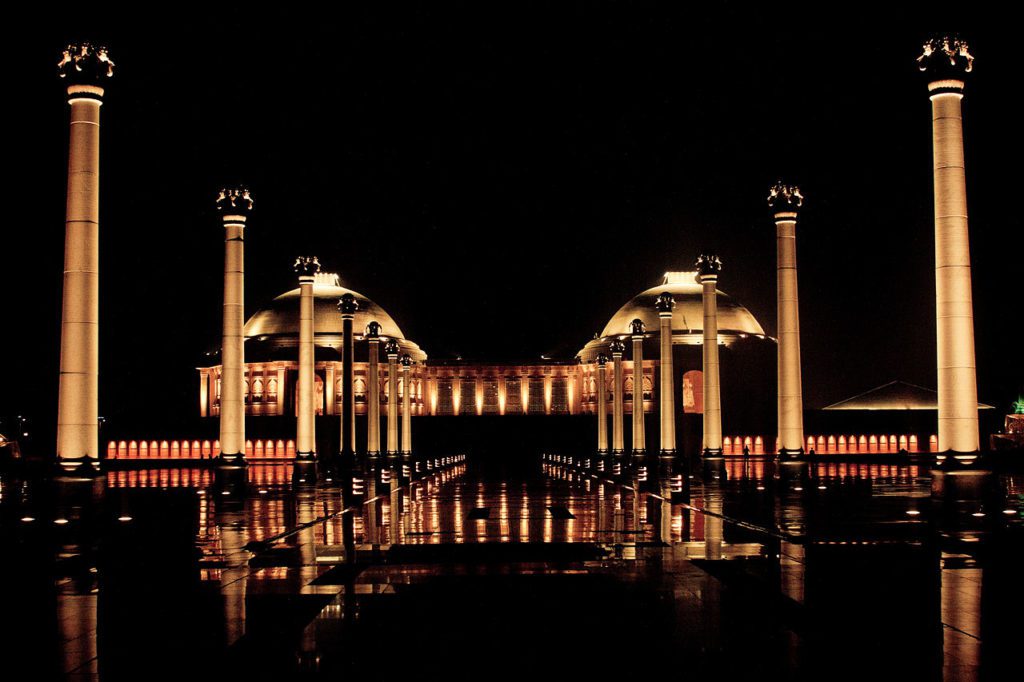 The Lucknow Zoo also known as Nawab Wazid Ali Shah Prani Udyan was established in 1921 to mark the visit of the then Prince of Wales to Lucknow. It was earlier known as Prince of Wales Zoological Gardens and is the oldest zoo in Northern India.

It is located in the heart of the city and is spread over 70 acre area. Among its attractions are hundreds of animals, reptiles and birds including wild animals. A toy train for children is a major attraction within the zoo. The State Museum and Folk Arts Museum are also in the zoo campus.

The 60 feet high Rumi Gate was constructed during the reign of Nawab Asaf-ud-Daula in 1784-86. It is said to be identical in design to an ancient portal at Constantinople in Turkey and is also referred to as Turkish Gate. It is a huge ornate structure, marked by an eight faceted chhatri in its uppermost part. In earlier times it was used to mark the entrance to the Old Lucknow City. It is now adopted as a symbol of the city of Lucknow. It was built by Nawab Asaf-ud-Daula to generate employment during the famine of 1784. 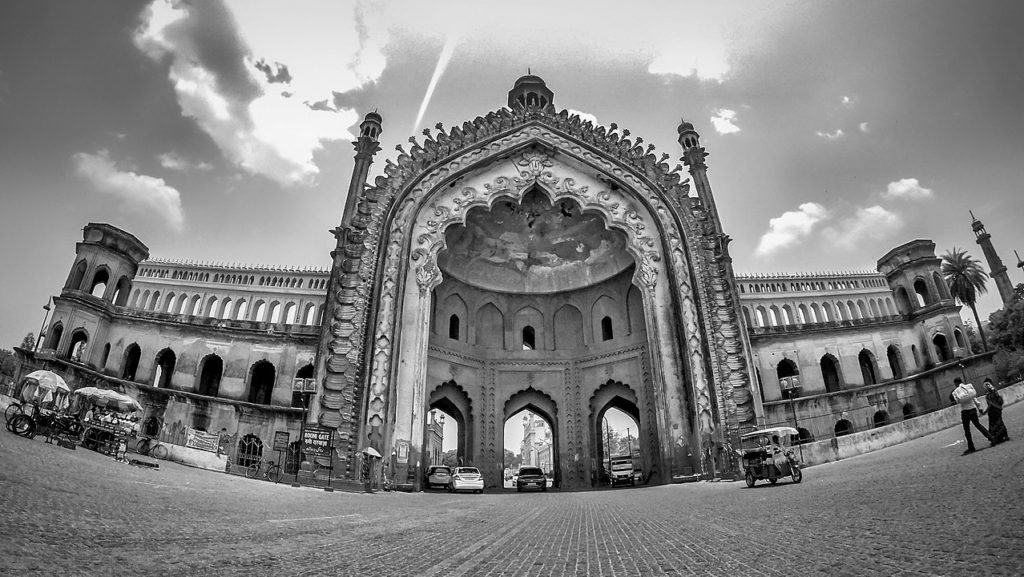 On 15 August 1962, Mahal was honoured at the Old Victoria Park in Hazratganj, Lucknow for her role in the Great Revolt. Along with the renaming of the park, a marble memorial was constructed, which includes a marble tablet with four round brass plaques bearing the Coat of Arms of the Awadh royal family. The park has been used for Ramlilas and bonfires during Dushhera, as well as Lucknow Mahotsava (Lucknow Exposition).

Situated at Suraj kund Park, it is a novel attraction of the city. The Saturn shaped building of the planetarium is unique of its kind.

This completely air-conditioned planetarium has a state of art projection system, which gives special effects while projecting. Art projecting system, digital sound and lift-ramp for handicapped persons are the other facilities available here.

Celebrated during the months of November – December, the Lucknow festival is a very important festival in this place. The unique and scintillating culture of Lucknow is portrayed in this festival. The Lucknow Festival is celebrated for a time period of ten days. In these ten days, Lucknow wears a grand and royal look and the whole city comes alive with joyous celebration. The Lucknow Festival is a platform to showcase the rich and unique culture, arts and crafts and the finer aspects of the lifestyle of Lucknow. Also, it is the best place to taste the lip-smacking cuisine that Lucknow is famous for.

Every year national book fair is held for all the book worms in the city.The fair is usually held for 10 days during the month of September-October. Book publishers from different parts of the country participate and book lovers also get to meet and appreciate several budding writers from around the country.

Awadhi cuisine is a cuisine native to the city of Lucknow. The cooking patterns of Lucknow are similar to those of Central Asia, the Middle East, and Northern India with the cuisine comprising both vegetarian and non-vegetarian dishes. The Awadh region has been greatly influenced by Mughal Cooking Techniques. The city is also known for its Nawabi foods.
Kebabs have been a part and parcel of Awadhi cuisine since ages with seekh, kakori and shami kebabs topping the list. Which makes Tundey-ke-kebab a 100 year old outlet for kebabs a must visit. Situated in chowk, the tunde kabab claims to be unique because of the zealously guarded family secret recipe for the masala (homemade spices), prepared by women in the family. It is said to incorporate 160 spices.

Lucknow has a humid subtropical climate with cool, dry winters from mid-November to February and dry, hot summers with thunderstorms from late March to June. Naturally the best time to visit lucknow is from November to march which has a pleasant breeze and no harsh sun. Enjoying a good chilled out evening on the bank of the gomti river would be perfect at this time.

A range of hotels in the city of nawabs have it covered for all the tourists and travelers pouring into the city. With options ranging from Oyo rooms to zostels, to even few backpacker hostels, lucknow has an easy accessibility to staying the night.

Places Around Allahabad – Where to head next?

Dewa Sharif is a famous pilgrimage town about 25 km from Lucknow in Barabanki district. It is the seat of renowned shrine of Sufi Saint Haji Waris Ali Shah, an exponent of universal brotherhood and has a special place in the history of Awadh. Haji Waris Ali Shah commanded mystical powers and revered by members of all communities. Devotees from far off places visit their “Mazars”, popularly known as Deva Sharif.

On the occasion of the annual Urs, a 10 days fair is held here in the month of October-November every year known as Dewa Mela to commemorate the saint. It includes an all India Mushaira, Kavi Sammelan, music performances etc.
The place also offers a good range of handicrafts for the tourists. A brilliant display of fireworks marks the conclusion of the fair. An annual fair in November is a perfect example of universal brotherhood. 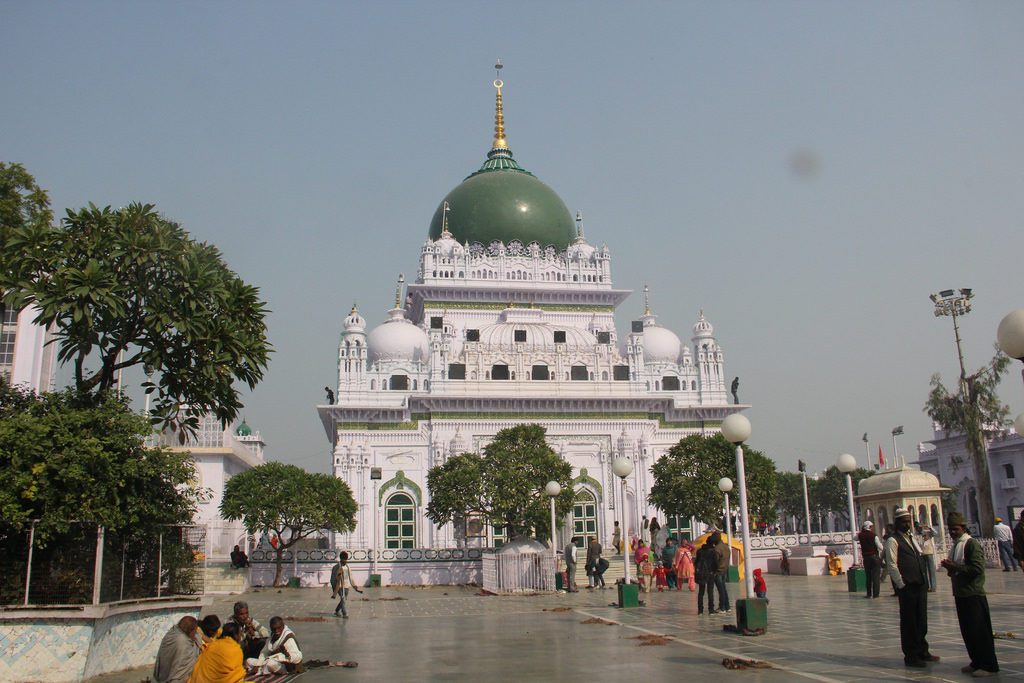 Famed as the birth place of Lord Ram, it is an important pilgrimage centre situated on the right bank of the river Saryu, about 110 km from Lucknow. For centuries, it was the capital of the descendants of the Surya dynasty of which Lord Rama was the most renowned king. Skand and some other Puranas rank Ayodhya as one of the seven most sacred cities of India. It is pre-eminently a city of temples. Remnants of Hinduism, Buddhism, Jainism and Islam can still be found in Ayodhya. 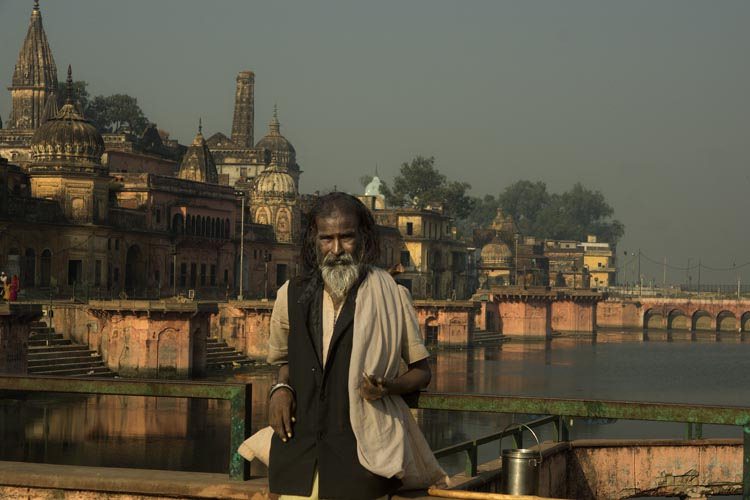 This National Park is situated in the Tarai foothills in Lakhimpur Kheri district bordering Nepal, about 265 km from Lucknow. Dudhwa Tiger Reserve is one of the finest examples of the few remaining exceedingly diverse and productive Tarai eco-system. The northern edge of the reserve lies along the Indo-Nepal border and the southern boundary is marked by the river Suheli. It is home to tigers, leopards, varieties of deer, antelopes and elephants amid thick green forest and grassland. 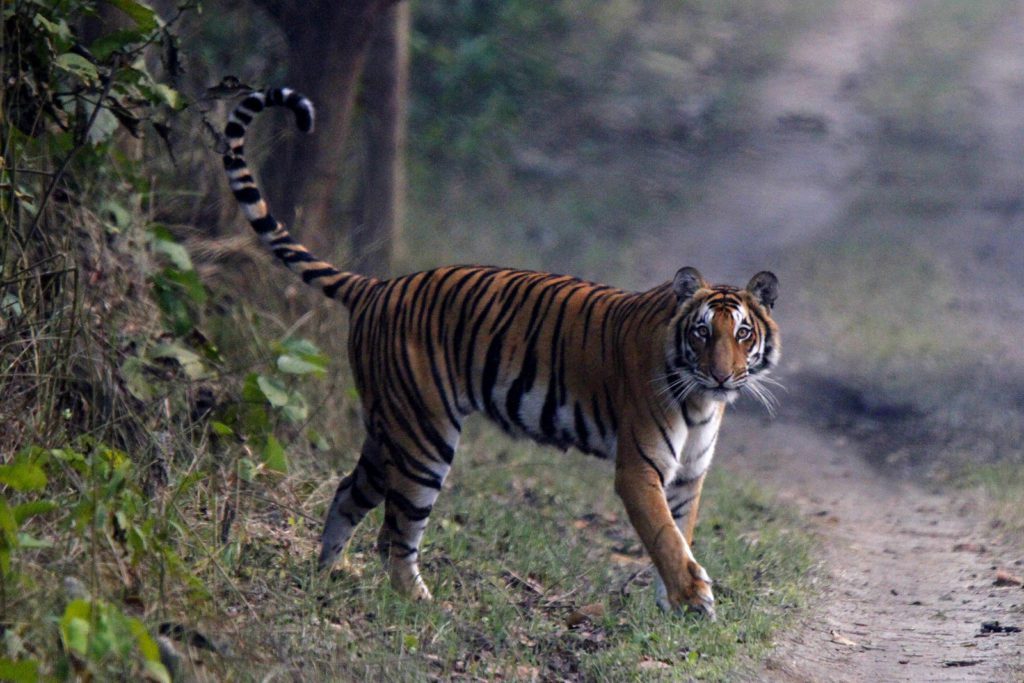 Vindhyachal is a famous Hindu pilgrimage spot closer to Mirzapur and Varanasi and has several temples in the vicinity with their own interesting stories. This town is situated on the banks of holy river Ganga and people come here to take a dip into it to pray to Goddess Ganga.
The town also sees countless devotees that come here to perform the trikona parikrama which covers three most important temples Vindhyavasini, Ashtabhuja and Kali khoh temples. There is a huge crowd of pilgrims here, all year round and especially during the Navratra when the whole town is decorated with diyas and flowers and hymn of holy chants.