One of the darkest era defining moments came on a brisk night of November in 2008, when ten unidentified armed men entered Mumbai, and began open firing at several places. Soon, they had control over several culturally significant monuments in India – including the Taj Mahal Hotel, Nariman Point, and Hotel Oberoi Trident. It took three days and an enormous amount of effort on the part of the Mumbai Police and the National Security Guards to finally take back control – but it came at a price. Today, we remember Major Sandeep Unnikrishnan, who fought valiantly for his motherland, and was posthumously awarded the Ashoka Chakra.

Sandeep Unnikrishnan belonged to a Malyali family in Bangalore, originally from Kozhikode, Kerala. The only son of retired ISRO officer K. Unnikrishnan, Sandeep always wanted to join the army. He even went to school in a crew cut, and after he graduated high school in science stream, he immediately joined the NDA. 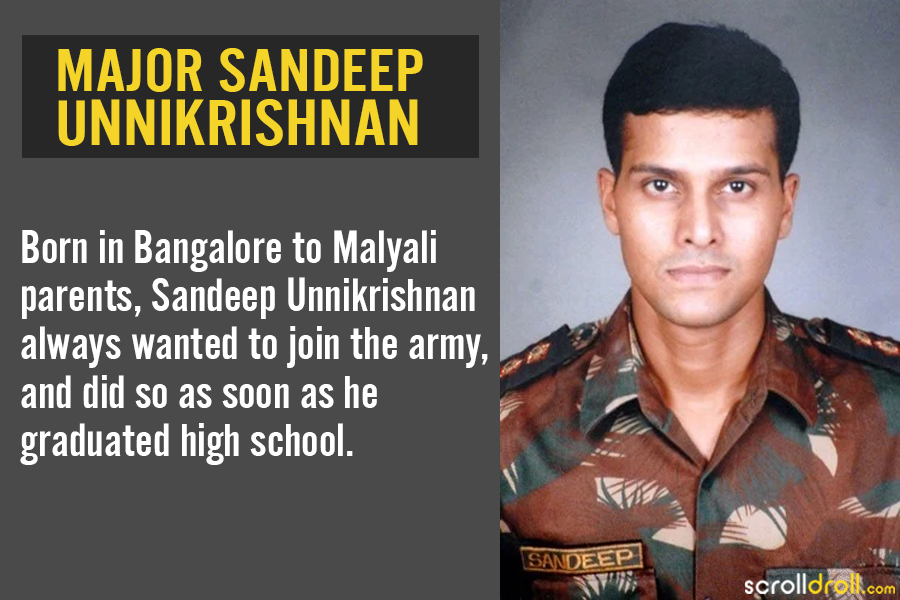 He graduated from Indian Military Academy in 1999, thereafter joining the 7th Battalion of the Bihar Regiment as Lieutenant.

When India was reeling under the Kargil War, Sandeep did his part, and was one of the men in front. In December 1999, he led a team of six soldiers, eventually establishing a post only 200 metres from the opposing side, and under direct fire. 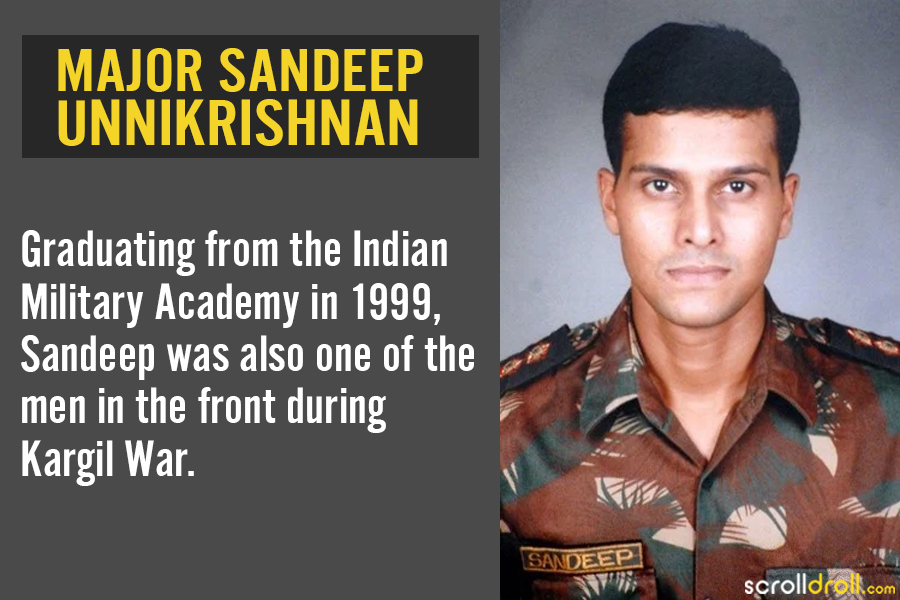 He was promoted to Captain in 2003, and then to Major in 2005. He took the Ghatak Course, regarded as the most difficult course of the Indian Army, and topped it twice. During his service, Major Sandeep Unnikrishnan served in several locations, including Siachen, Jammu and Kashmir, Gujarat, Hyderabad, and Rajasthan.

Major Unnikrishnan was chosen to join the National Security Guards, where he was assigned as the training officer of the 51 Special Action Group. 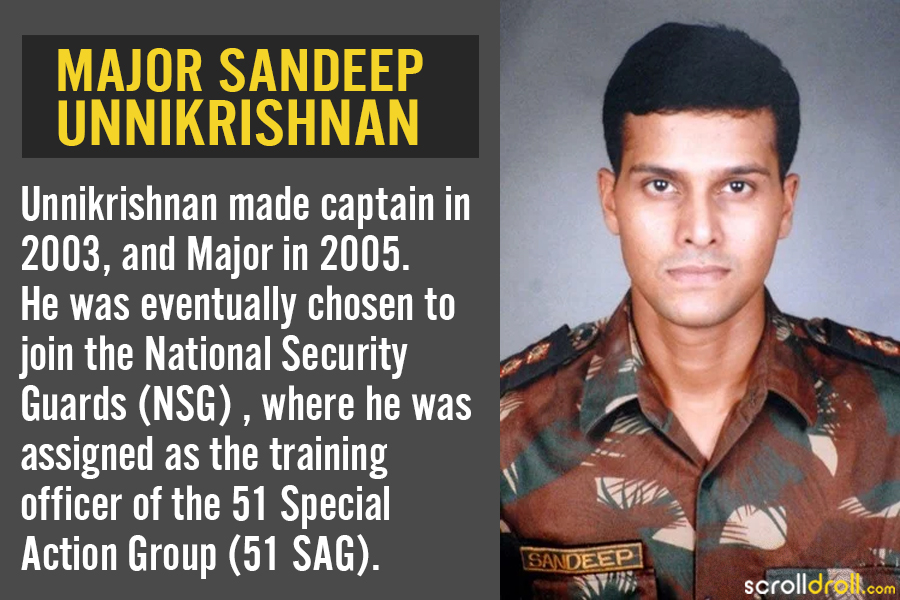 The morning of 26th November 2008 started like any other day in 21st century India. But by night, millions were glued to their TV sets around the country and the world, as a group of just ten men took siege of various culturally significant monuments around South Mumbai.

One by one, these men entered crowded spaces like Leopold Café and Chhatrapati Shivaji Terminus, open firing at people wherever they saw them, leaving behind a carnage wherever they went. More importantly, they took hold of Mumbai’s famous Taj Hotel and The Oberoi Trident, and it took three days to rid these buildings of the terrorists.

While at first the Mumbai Police put on a brave front and tried to control the situation, the terrorists had far more advanced weapons, and were loaded with an enormous amount of ammo. It was ultimately decided that NSG commandos be brought to Mumbai to fight the terrorists.

While Nariman Point and Oberoi Trident were cleared of all terrorists by 28th November, it was the Taj Hotel that proved to be a much bigger challenge – with its grand size that allowed the terrorists to hide in plain sight, the NSG commandos had to go the extra mile, and unfortunately for Major Sandeep Unnikrishnan, it was his last mile. 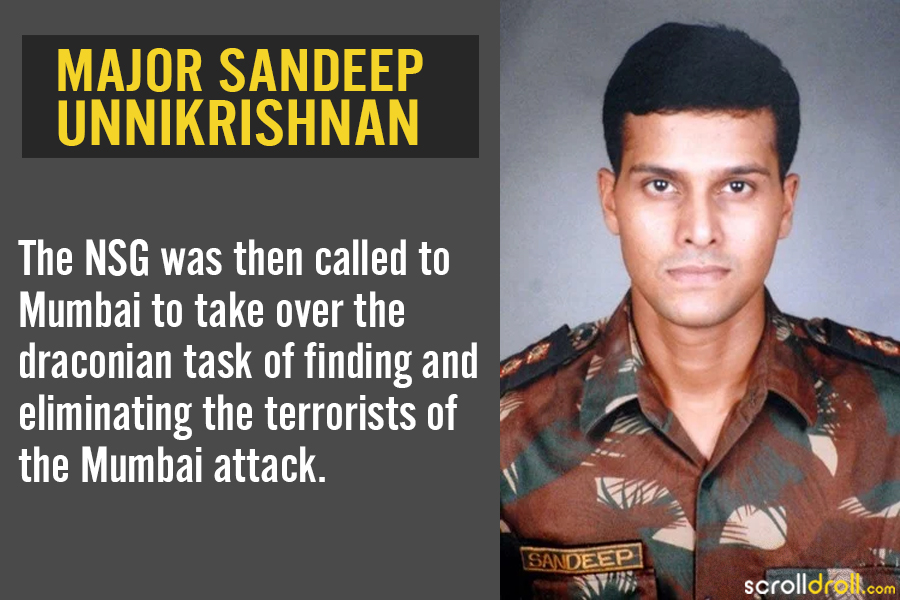 In an operation titled the Black Tornado, on 27th November, Major Sandeep led the 51 Special Action Group into the Taj Mahal Hotel with the intent to rescue hostages. Entering the building with ten commandos, he was able to evacuate hostages from the fifth and sixth floors of the hotel.

The Major and his team then continued to evacuate the hotel for the next fifteen hours, and at 1 AM on 28th November, he led his team through the grand central staircase of the Taj Mahal Hotel. 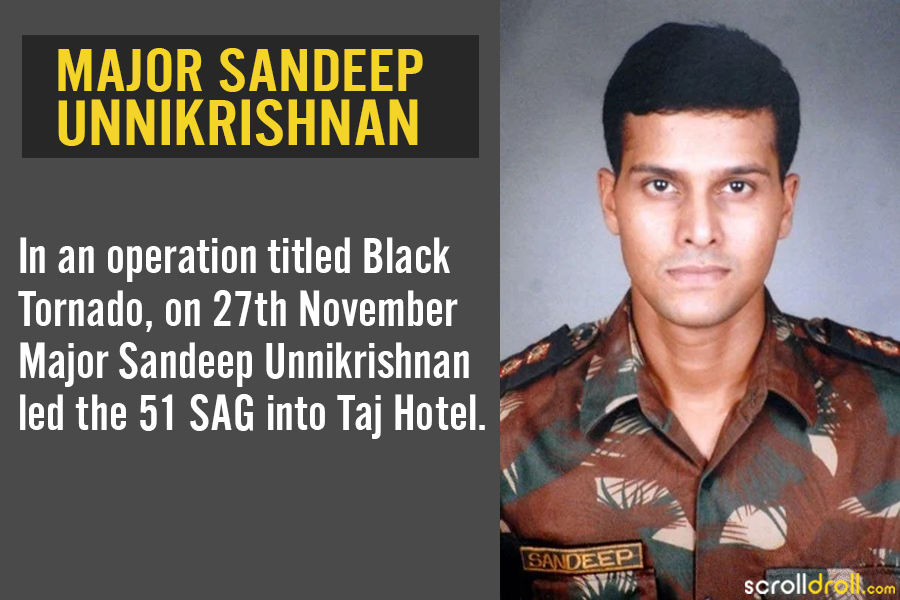 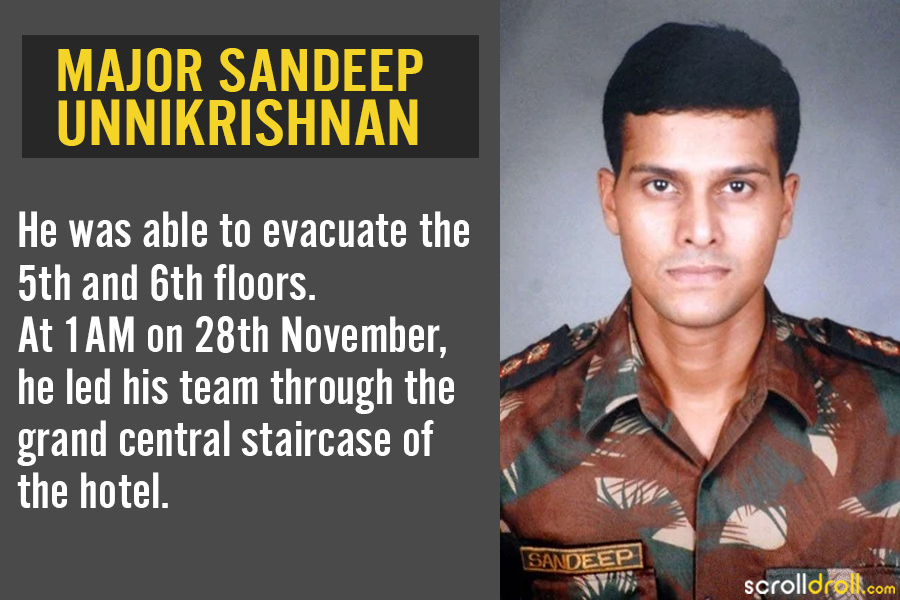 The seasoned soldier knew this was a risky move, as it would expose them to the terrorists, but he also knew it was the only way. With blasts resulting in several fires at the hotel, the fire brigade was forced to bathe the building in thousands of litres of water, which meant that the carpeted floor was soaking wet. Every time the soldiers took a step forward, the carpet made a squishing noise underneath them.

On the fourth floor, one of his men, Sunil Yadav, was shot in both his legs by the terrorists. He had also taken considerable damage from a grenade, and was afraid he was going to lose his limbs. The Major asked his teammates to take him back, and went to chase the terrorists on his own. Apparently, his last words were, “Do not come up. I will handle them.” Major Sandeep was never heard from again. 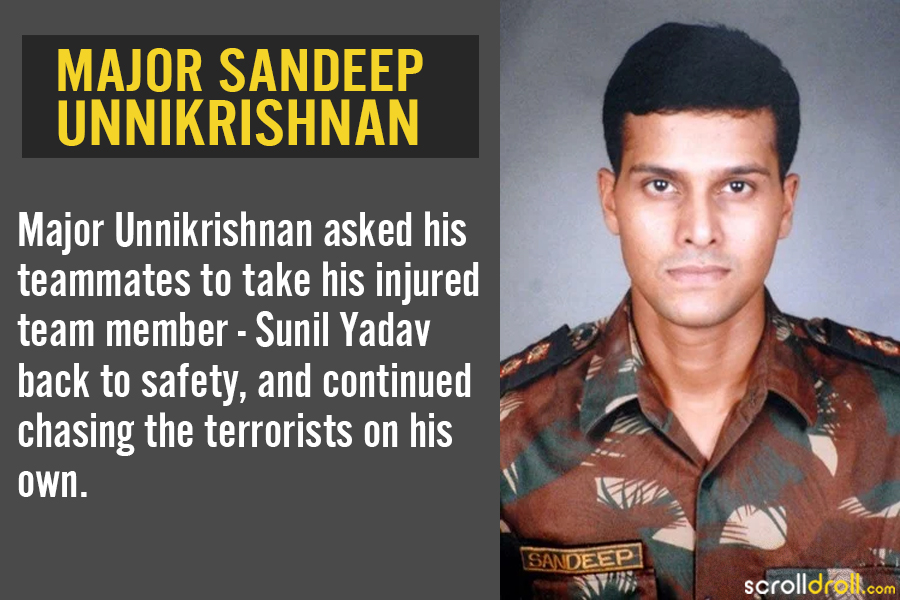 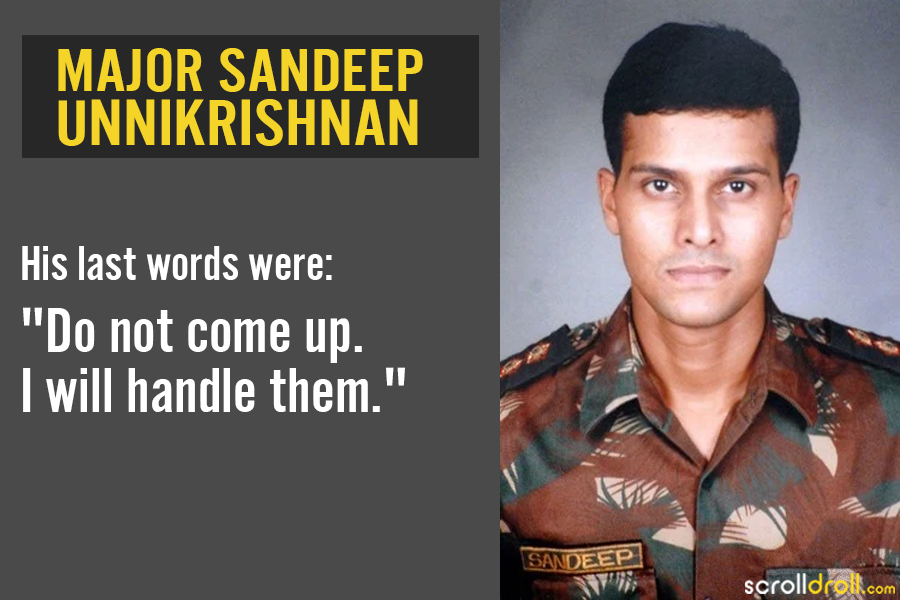 The NSG commandos continued to move through the rest of the hotel, eventually eliminating all four terrorists. There was, however, no trace of the Major, despite his team trying to reach him via his walkie-talkie.

The commandos then continued to look through the rest of the hotel to make sure there were no terrorists left. At 9:30 AM, Major Kandwal and Major Jasrotia retraced Major Sandeep’s steps, eventually coming across a black figure lying face up on the cold marble floor.

Major Sandeep had received several rounds of bullets, some of which had penetrated his skull. Around his thumb, was the pin of a flash-bang grenade.

Even alone, the valiant soldier hadn’t gone down without a fight. He had fired at his attacker, for there was a lone bloodied shoe not too far from his body. 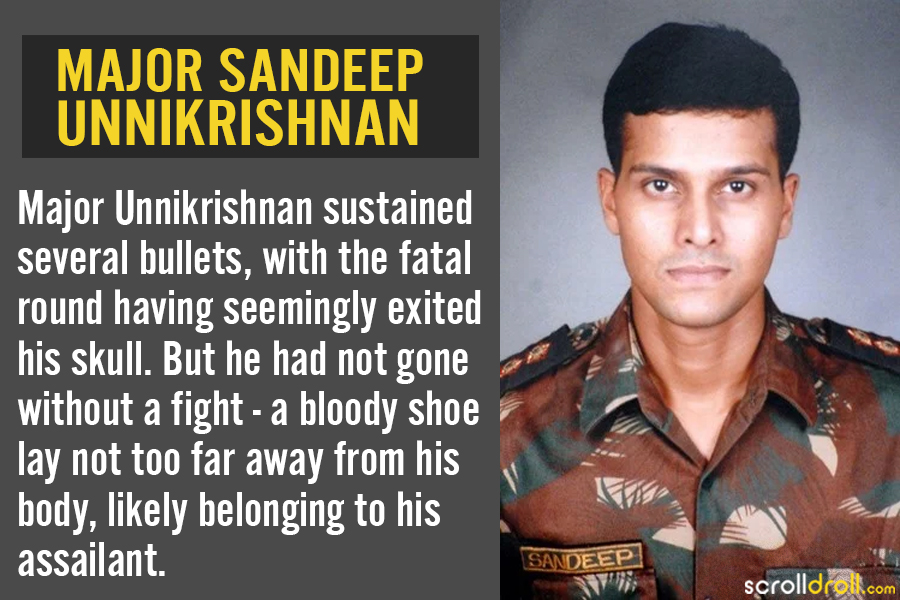 It wasn’t until the wee hours of the morning on 29th November that Taj, the last monument to be cleared of terrorists, was fully under the control of the Indian government. As people rejoiced in the streets, the NSG and the Mumbai Police mourned for their friends who had died fighting the good fight.

Even though it’s been well over a decade since the 26/11 attacks, it is safe to say that it’s an event that still sends shivers down the spine of anyone who was old enough to witness it first-hand. The cold-blooded nature of the hundreds of killings that took place show us a side of humanity that isn’t humane at all.

Major Sandeep Unnikrishnan received the Ashoka Chakra – India’s highest peacetime gallantry award, on 26th January 2009, for the bravery he had shown at the Taj Mahal Hotel. 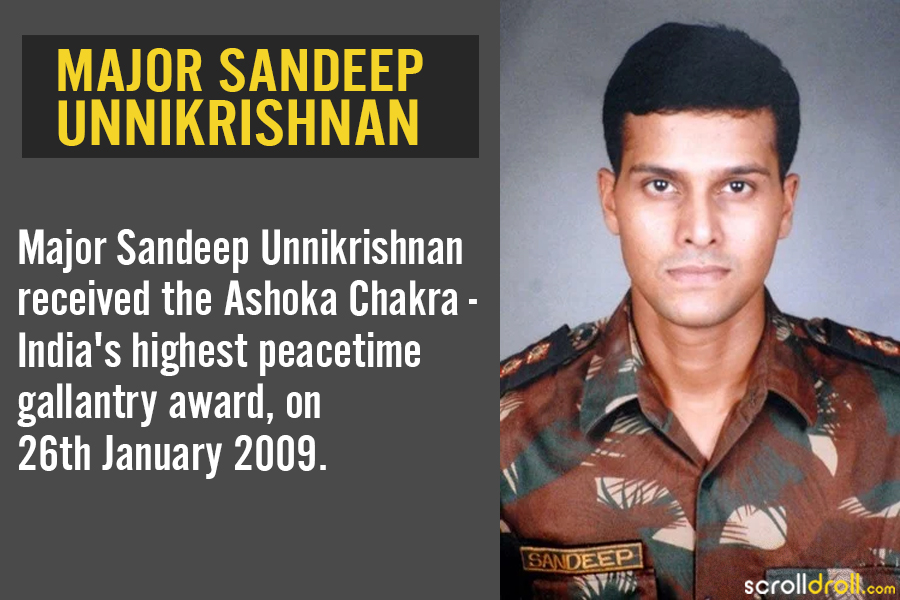 While Major Sandeep is long gone, leaving behind himself aging parents a swarm of memories, he continues to live in the hearts of not just the people he managed to save, but also millions of Indians whom he inspired even in his death. 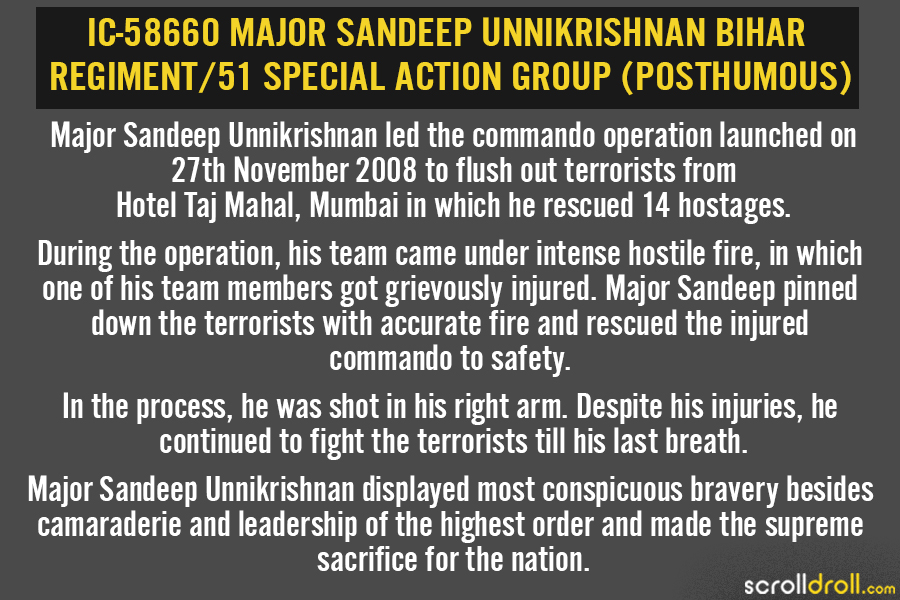 We hope India never forgets her brave son who put up an even braver fight. Here’s to Major Sandeep Unnikrishnan – and to every soldier who has ever died fighting for India.

Pingali Venkayya: The Man Who Designed The Indian National Flag