The Sino-Indian war of 1962 was a tragic defeat to India; despite constant tension on the border it shared with China, India never believed that the Chinese would attack – which ended up costing us dearly. When the Chinese did attack, India was taken off guard, unprepared and outnumbered – resulting in a rather embarassing defeat. In stark contrast, the Battle of Rezang La stands out for the unbelievably brave fight put up by the Indian soldiers, especially Major Shaitan Singh.

Also read: The Story Of Rifleman Jaswant Singh Rawat: The Hero Of Nauranang

Shaitan Singh was born on December 1st 1924 in a military family wherein his father, Lt. Col. Hem Singh had already served in the British Indian army during World War I for which he was awarded the Order of the British Empire.

Shaitan Singh did his matriculation from Chopasni Senior Secondary School, where he was noted for being a talented football player. He completed his graduation from Jaswant College in 1947.

In 1949, Shaitan Singh continued the rich military legacy of his family and joined the Jodhpur state forces. Once the princely state of Jodhpur merged into India, Singh was transferred to the Kumaon Regiment. 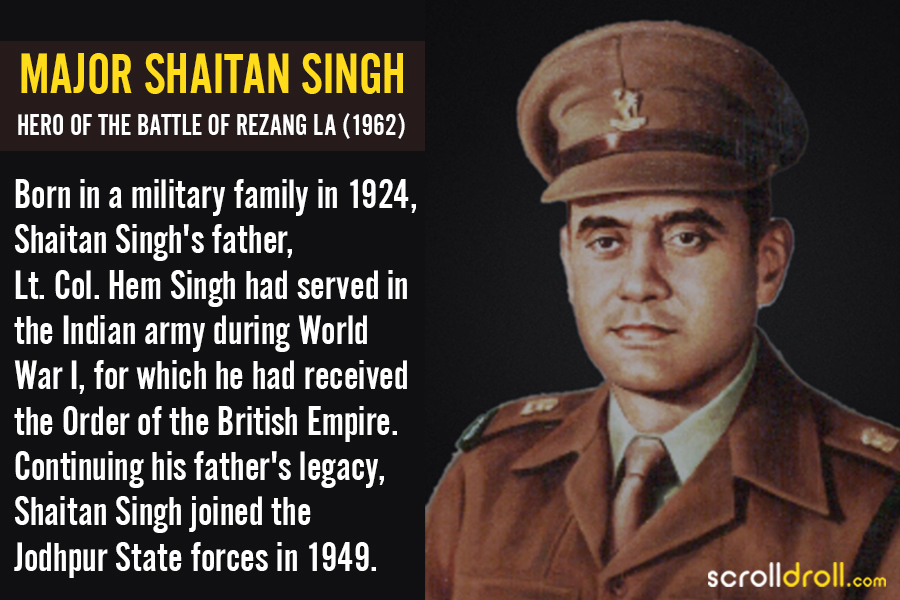 Singh was promoted to Captain in 1955. Between this time until the Sino-Indian war, Singh took part in the Operations in Naga Hills and the 1961 annexation of Goa.

Owing to the persisting tension between Indian and China vis-a-vis the borders in the Himalayan region, then PM Jawaharlal Nehru asked for strategies to deal with the situation. It so happened that PM Nehru rejected the proposal put forth by the Indian army, and instead gave his go-ahead to a plan proposed by the bureaucrat called the “Forward Policy.” 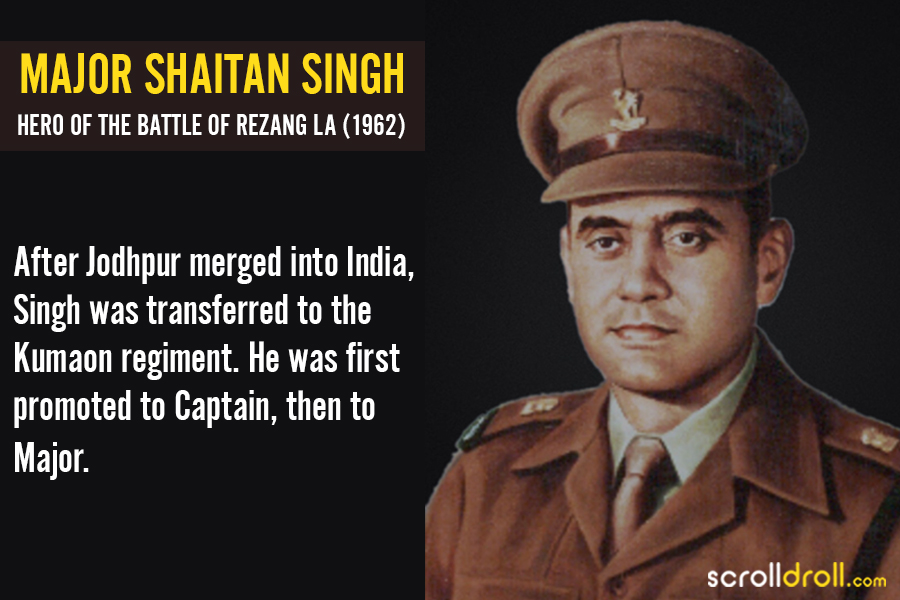 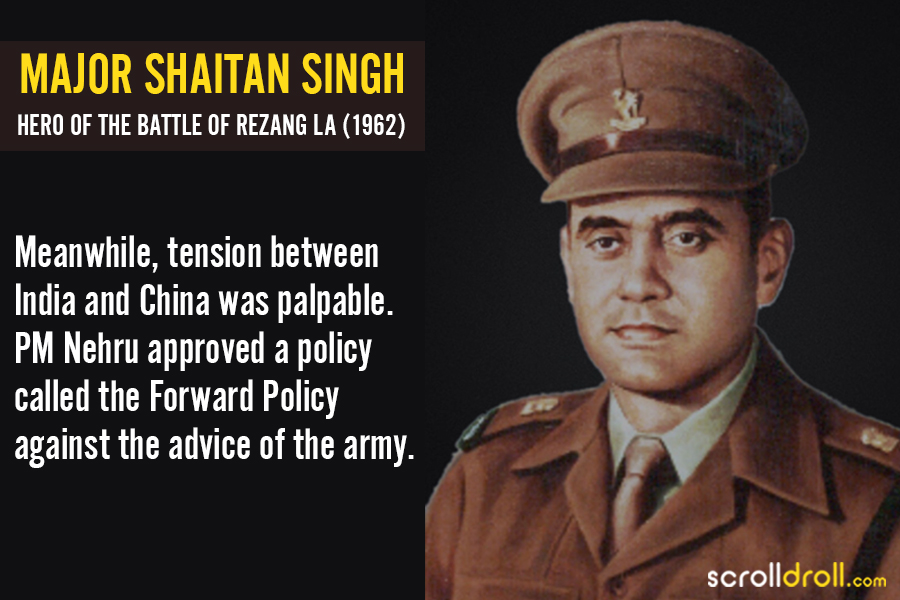 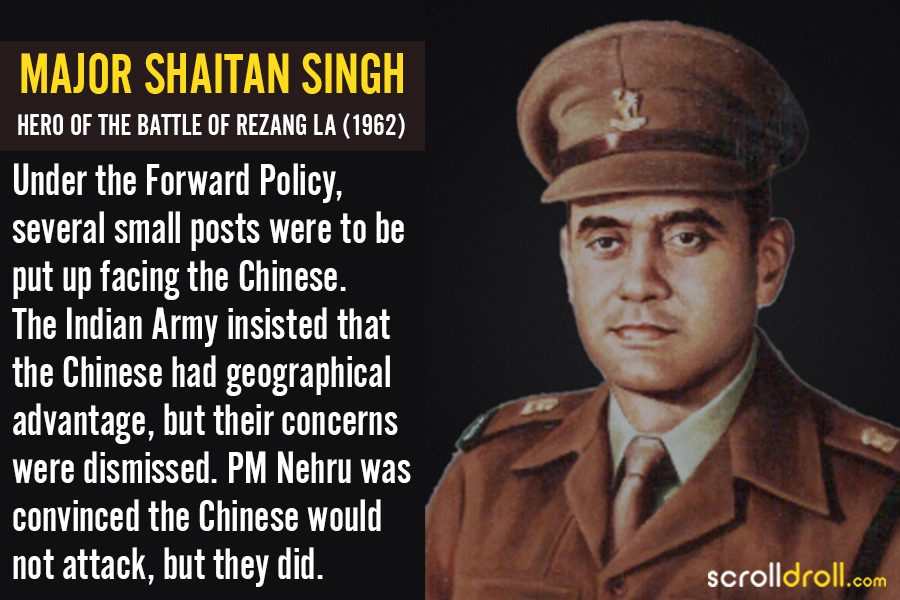 The Chinese were the first to attack, thus starting the Indo-China war of 1962. The 13th Battalion of Kumaon Regiment, Charlie ‘C’ company was led by Singh and operating in Chusul sector, at a height of 5,000 metres, holding a position at Rezang La. On 18th November, the Chinese attacked in huge numbers, ranging from 5000-6000. Once aware that the Chinese were about to attack, the Indian platoons began firing with light machine guns, rifles, mortar, and grenades.

The No. 9 Platoon continued to fire until the Chinese were only 90 metres away, causing several casualties. Because a frontal attack had been unsuccessful, the Chinese then attacked from the rear, with 400 Chinese men firing upon Platoon no. 8 with medium machine guns. No. 7 Platoon was attacked by 120 Chinese soldiers. 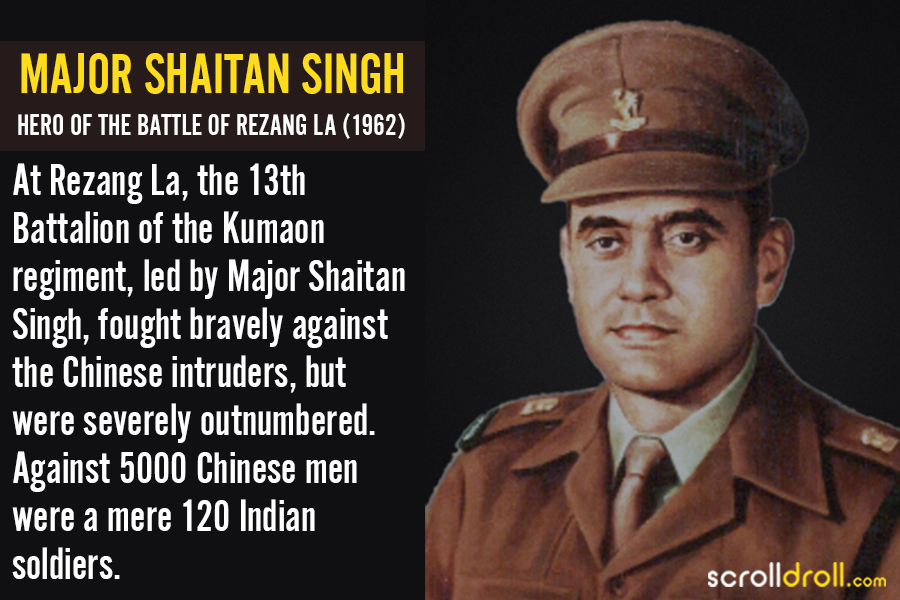 Indian men countered with 76mm mortar shells and killed several Chinese soldiers, however the Chinese were far greater in number. Eventually, only 20 Indian soldiers survived, who then engaged in hand-to-hand combat with the Chinese, however more Chinese reinforcements arrived, thus leaving Platoon 7 & 8 with no survivors. 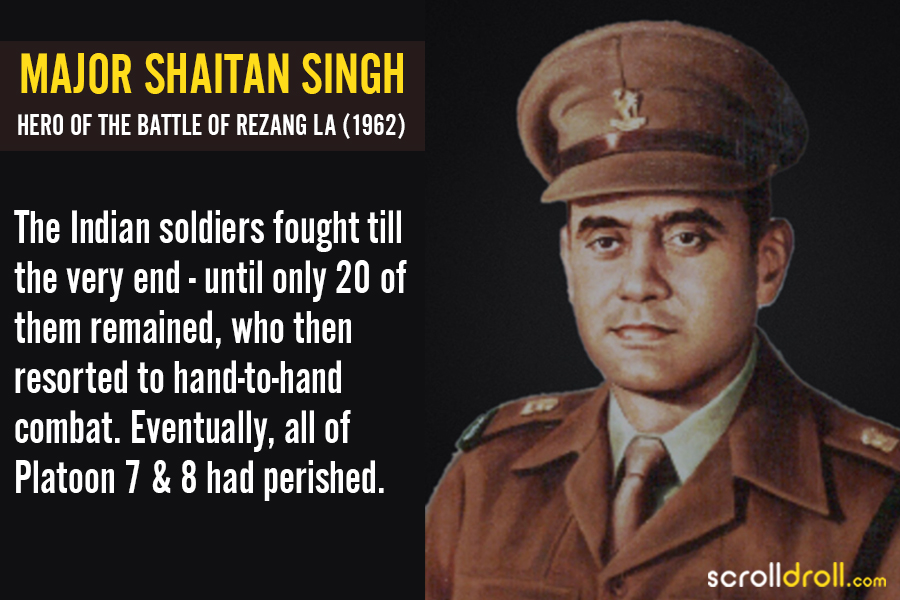 During the battle, Major Shaitan Singh continuously moved from post to post, boosting morale of his men as well as giving them instructions to reorganize and attack. However, as he moved about changing positions, he was grievously injured. When his men tried to cover for him, the Chinese began firing heavily, so he commanded his men to leave him behind. He was left behind a boulder, out of the view of the Chinese. 114 out of the 120 soldiers at Rezang La perished. 5 were captured by the Chinese, all of whom escaped. One was sent back by Major Shaitan Singh so he could live to tell the tale. 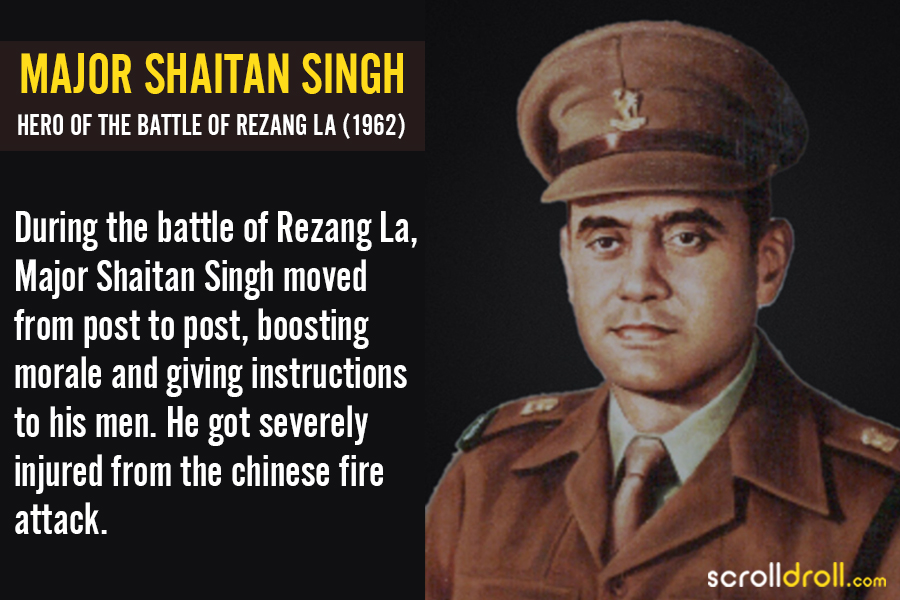 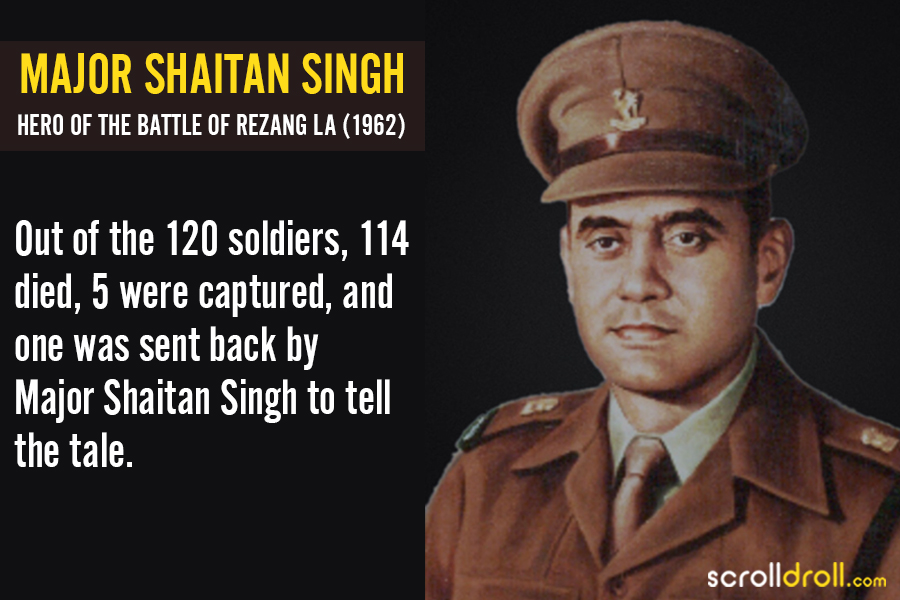 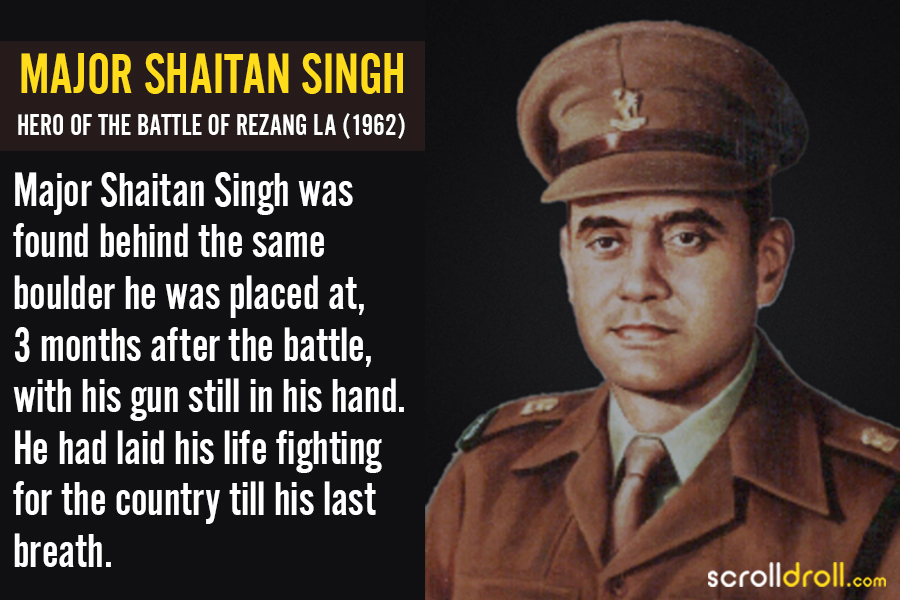 Recognising Major Shaitan Singh for his immense bravery, the government of India awarded him with Param Vir Chakra, the highest military decoration in India. 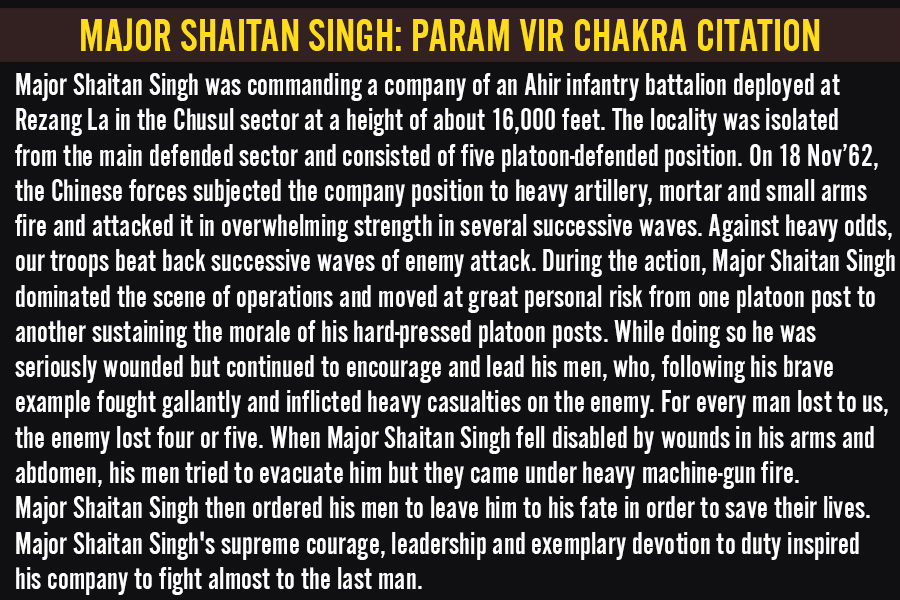 Despite so many factors weighing against him, Major Shaitan Singh fought tooth and nail against the Chinese, knowing that it was a fight he would lose. Because of his undying bravery, the battle of Rezang La shall forever be remembered by his name!