It can be said without hesitation that Indian temples boast of some of the best architecture in Indian history. Since temples were often, in the past, centers of cultural exchange that attracted visitors from all walks of life, much work was put into beautifying these buildings. Sadly, a lot of it has been lost due to wear and tear of time as well as the several invasions India has braved over the years. However, even in partial ruin, Indian temples are still a sight to behold. With that, we bring you the 15 most beautiful temples in India.

Located in the town of Hampi in Karnataka, Virupaksha Temple is a part of a group of monuments at Hampi recognised as a UNESCO World Heritage site. Virupaksha Temple has as its deity Lord Virupaksha, a form of Lord Shiva. It is believed that the shrine was first created in the 7th century, with the architecture around the place of worship growing and developing century after century. Much of the beautiful architecture was destroyed after Muslim invasion of the territory, but additions were made in the 19th century. 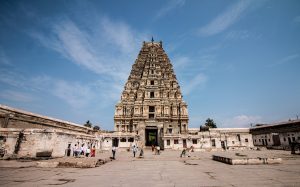 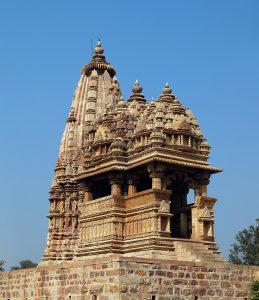 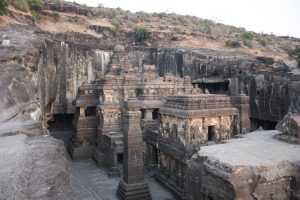 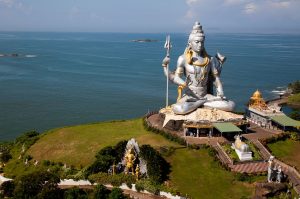 The Dilwara Temples are a group of svetambara Jain temples located near Mount Abu, the only hill station in Rajasthan. They were built between the 11th and 16th centuries, being some of the most beautiful monuments in the Maru Gurjara architectural style. There are five Dilwara Temples in all, and they make some of the most beautiful temples in India. 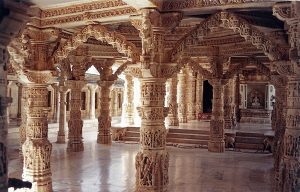 Swaminarayan Akshardham is a Hindu temple in Delhi that consists of a complex that has on its display millennia of Hindu tradition and culture. The temple was built by BAPS, Bochasanwasi Akshar Purushottam Swaminarayan Sanstha in 2005. The complex has various exhibition halls, an abhishek mandap, a Sahaj Anand water show, and a themed garden. 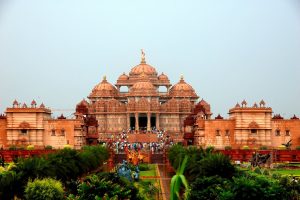 Meenakshi Temple or Arulmigu Meenakshi Sundareshwar Temple is located on the southern bank of the Valgai river. It is dedicated to Meenakshi Amman, an avatar of Parvati, who is the main deity of Madurai, as well as her consort, Sunderswarar, a form of Shiva. The temple sits in the center of Madurai and is one of the Paadal Petra Thalam, a group of 275 temples revered in the verses of Saiva Nayanars. 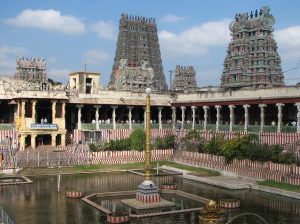 Located in the coastal city of Puri in Odisha, the Jagannath Temple is dedicated to Lord Jagannath, an avatar of Vishnu. The temple is believed to have been made after the 10th century begun by the first king of the Eastern Ganga dynasty, named Anantavarman Chodaganga Deva. The temple is also famous for its annual Ratha Yatra festival, which attracts hundreds of thousands of devotees. During Ratha Yatra, Lord Jagannath is believed to have temporarily left his home. 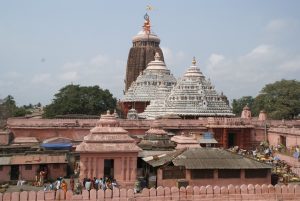 Located in Veraval in Saurashtra, Gujarat, the Somnath Temple is believed to be one of the 12 Jyotirlinga shrines of Shiva. The present structure was completed in 1951 and made in the Chalukya style. The Jyotirlingas are believed to be spots where Lord Shiva appeared in the form of a pillar of light (Jyoti means light). 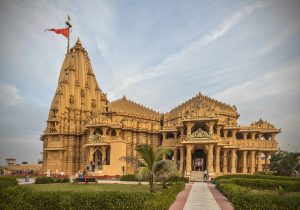 Perhaps one of the most famous temples in India for not just its beauty but also because of its inaccessibility, Vaishno Devi is located in th Trikuta Mountains in Jammu and Kashmir. It is one of the 108 Shakti Pethas dedicated to Goddess Durga, a major Hindu deity. Despite the difficulty faced by devotees to reach the temple, millions of visitors still throng the place, even more so during the Navratri. 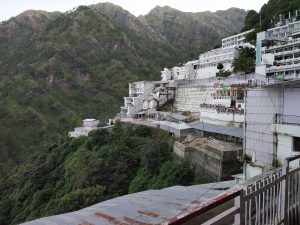 Sai Baba of Shirdi was a spiritual leader who was revered by Hindu as well as Muslim devotees during and after his lifetime. Sai Baba is believed to have died in the year of 1918. He is associated with many miracles, and is considered to be a form of Sri Dattaguru. Even though Sai Baba’s place of birth is unknown, it is agreed upon that he arrived in Shirdi at some point and lived there till the end of his days. The town of Shirdi is now a popular place for devotees to visit, and it has a temple dedicated to the the saint. 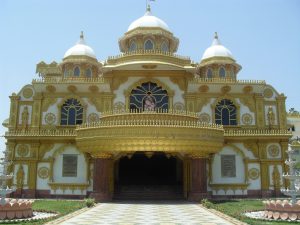 Located in Amritsar in Punjab, the Golden Temple, also known as Harmandir Sahib, is a gurdwara built around the 16th century. It is the most important shrine in Sikhism, and welcomes people from all walks of life. The Golden Temple registers upwards of a hundred thousand visitors each day and is famous for its langar – a vegetarian meal served to anyone who wants it, without discrimination. 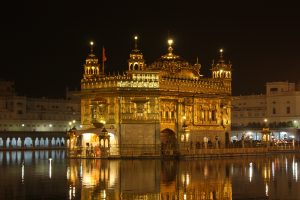 As a part of the four spots in the Char Dham, Badrinath Temple is one of the most visited Hindu shrines in India. Located in the town of Badrinath in Uttarakhand, Badrinath Temple is dedicated to Lord Vishnu as one of the 108 Divya Dasams dedicated to the Hindu deity. The temple is surrounded by snow capped hills for the most part of the year, which is why devotees are only allowed for six months between April and November. 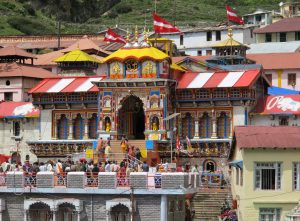 Located in Konark town in Puri district in Odisha, the Konark Temple, also known as the Sun Temple, is a Hindu temple dedicated to the Sun God, Lord Surya. The temple is believed to have been built during the 13the century during the reign of Narasimhadeva I of Eastern Ganga dynasty. The temple is especially famous for its intricate carvings, even though much of the temple is in ruins. The temple receives a large number of visitors every year, especially during the Chandrabhaga Mela around February. 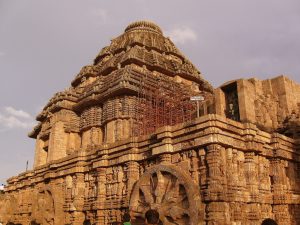 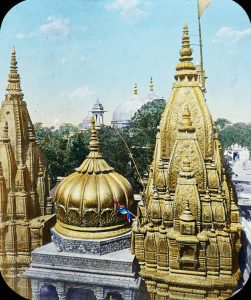 Which of these most beautiful Indian temples have you visited so far? Tell us in the comments below!