14 Most Beautiful Mosques In India

India is a secular country. The craftsmanship of the Indians has always been a marvel for people from all around the world. The mosques in India are no exception. They are celebrated not just for their religious value but also for the architectural genius that conceived them.

Here are 14 of the most beautiful mosques in India that you definitely must visit.

The mosque in Ahmedabad is one of the largest mosques in India. It was built in the year 1424 by Emperor Sultan Ahmed Shah. The structure exhibits fusion with Hindu and Jain architecture, especially visible in the carving of some domes in the shape of a lotus, which can also be witnessed in Jain architecture. 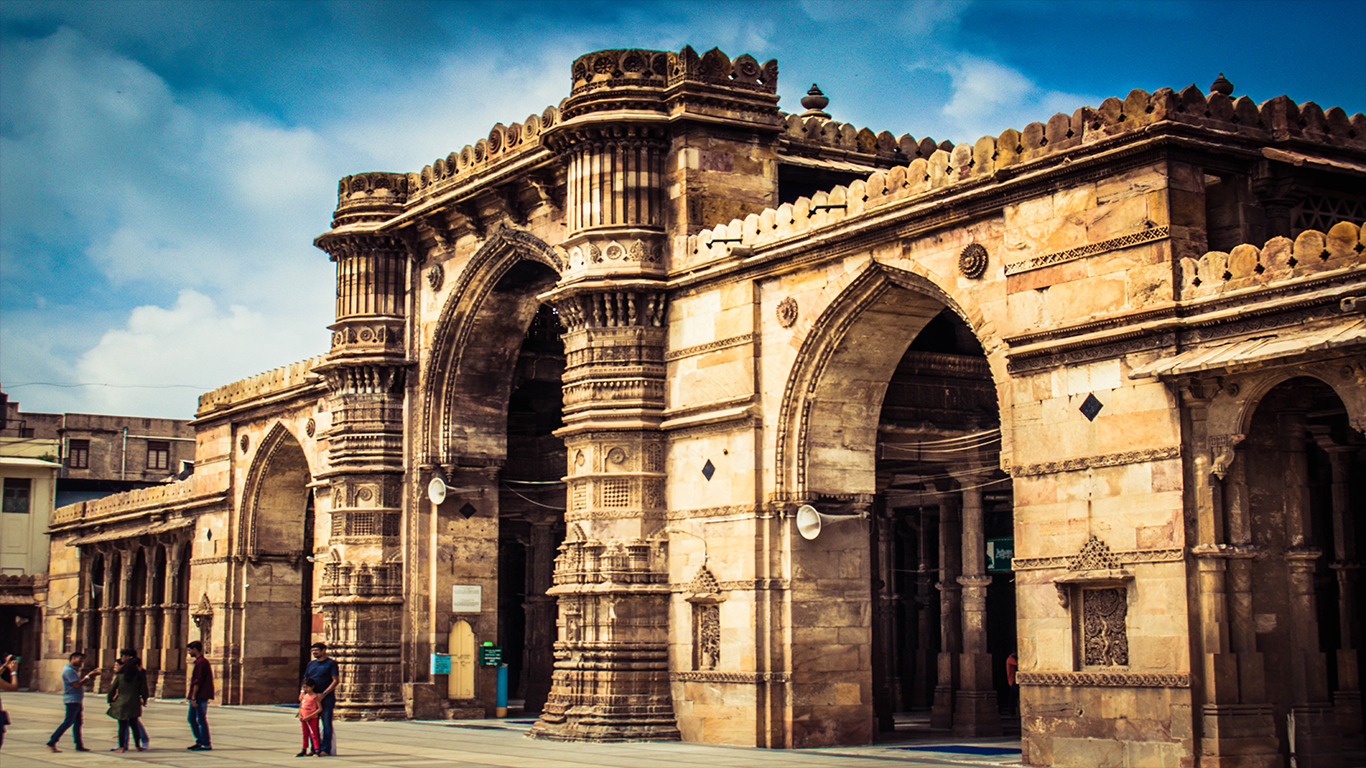 The Adina Mosque was built by Sultan Sikandar Shah, the second sultan of the Ilyas dynasty, between 1364 CE and 1375 CE. It bears resemblance to the Great Mosque of Damascus in design. The Adina Mosque is the only hypostyle mosque in West Bengal. An interesting fact about the mosque is that it has no entrance gateway, and has a monumental ribbed barrel vault over the central nave. It is one of the few terracotta mosques constructed in West Bengal during the Bengal Sultanate. The design borrows elements from Bengali, Arab, Persian, and Byzantine styles of architecture. The sheer size of the Adina Mosque is a sight to behold, and it is one of the most beautiful mosques in India. 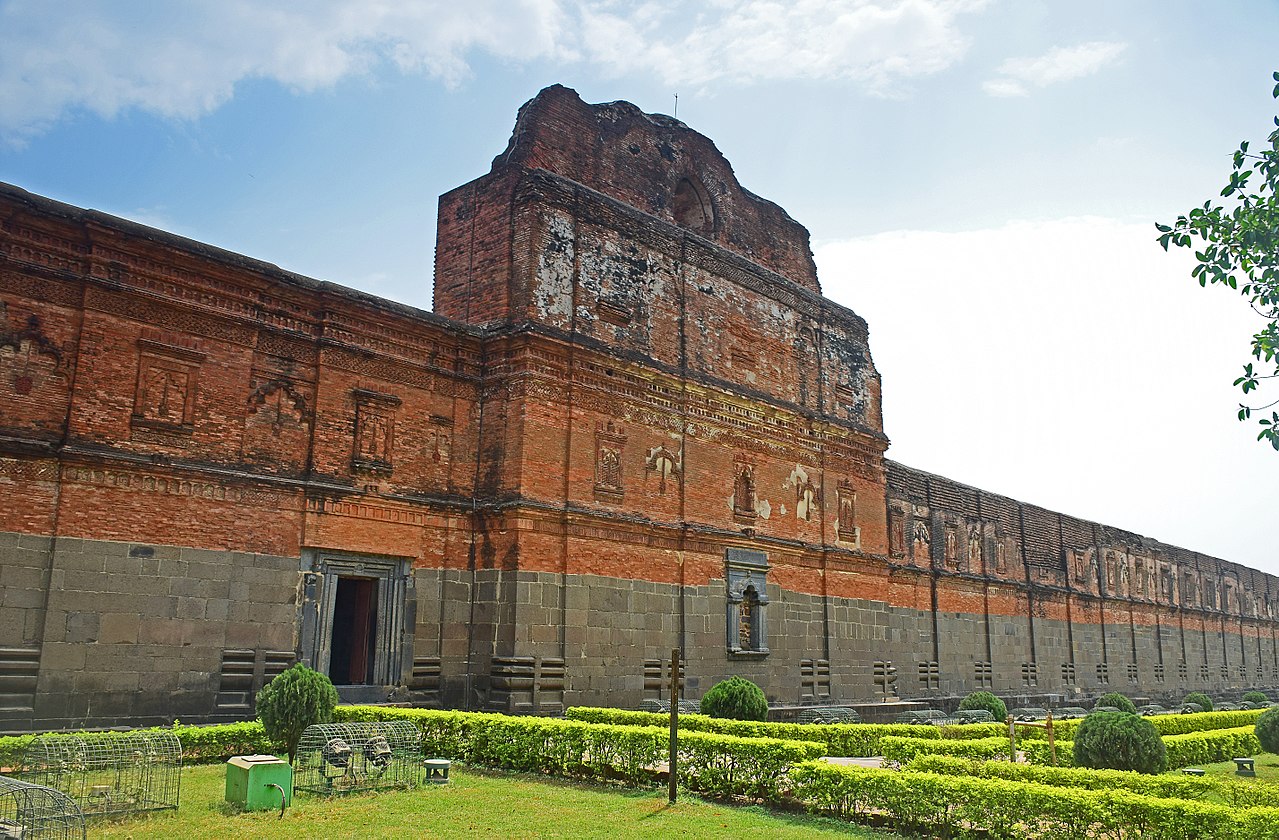 Mecca Masjid is perhaps the oldest mosque of Hyderabad, and one of the largest in the country. It was built by was built by Quli Qutub Shah and can accommodate 10,000 people at a time. It is filed as a heritage building in the old city of Hyderabad. 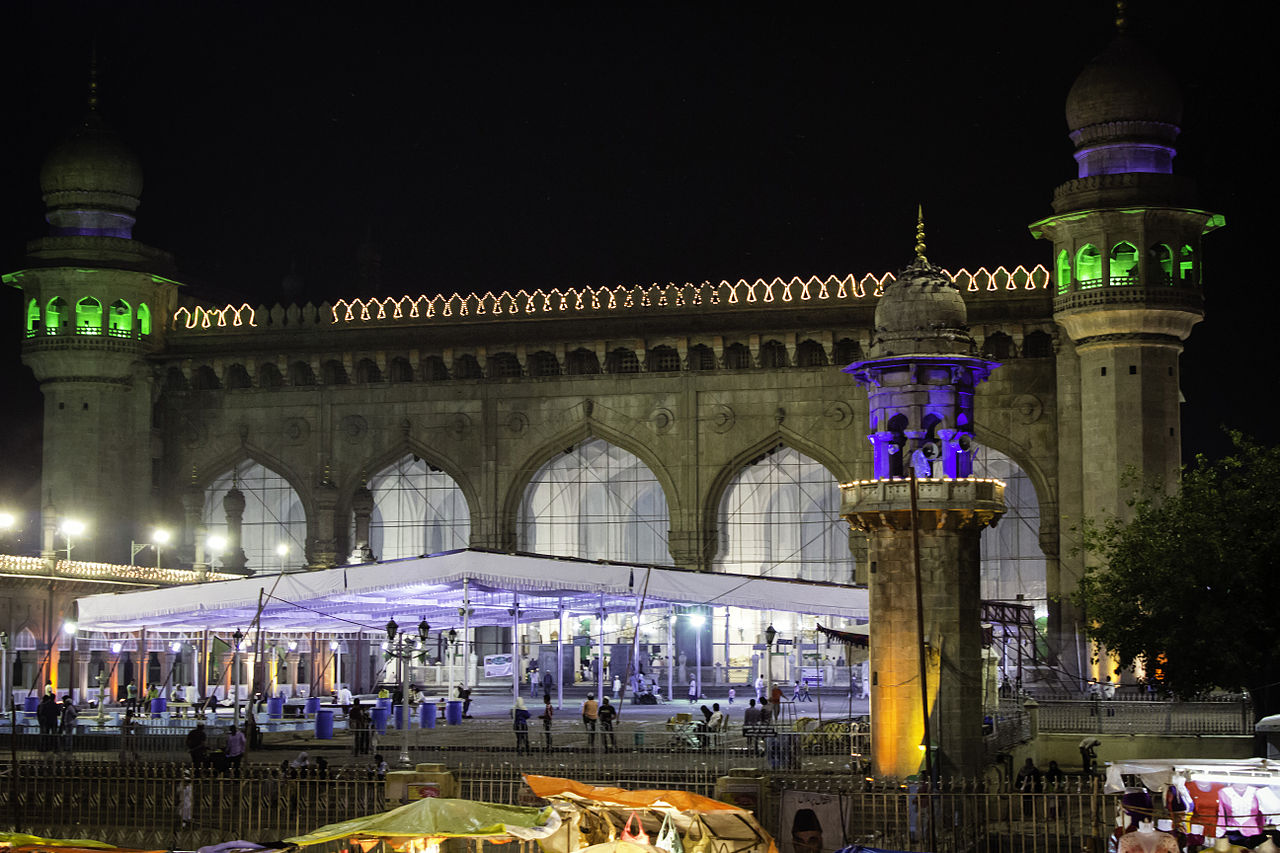 Constructed by Nawab Asaf-Ud-Daula in 1784, the Bada Imambara is famous for its unsupported structures that are considered incredible achievements in the field of architecture till date. The building was designed by Kifayat-ullah. The architectural style is a mixture of Rajput and Mughal architectures along with Gothic influences. The corridors have hidden between them a dizzying labyrinth, a network of more than 1000 passages that can fool the smartest of people. Also a remarkable feature is a five-storied baoli, called the Shahi-Hammam, which connects with the river Gomti. Of the five stories, only the first two stories are above water, the rest of the structure being perennially immersed in water. This edifice is not only one of the most beautiful mosques in India, but also an important lesson in architecture and history. 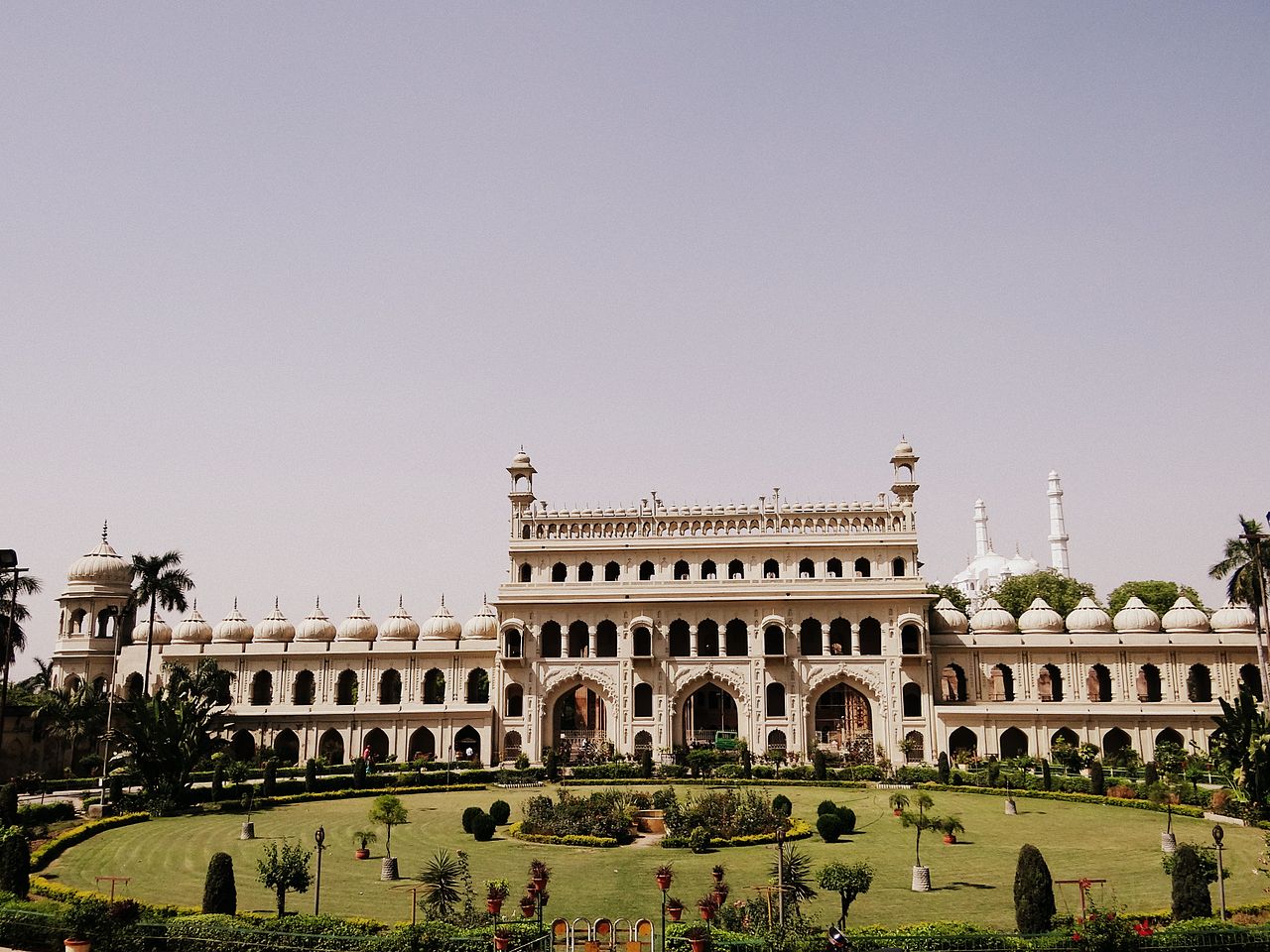 The Hazratbul Shrine is considered to be the holiest shrine in Srinagar. It is celebrated because it possesses the Moi-e-Muqqadas, which is believed to be Prophet Muhammad’s hair. 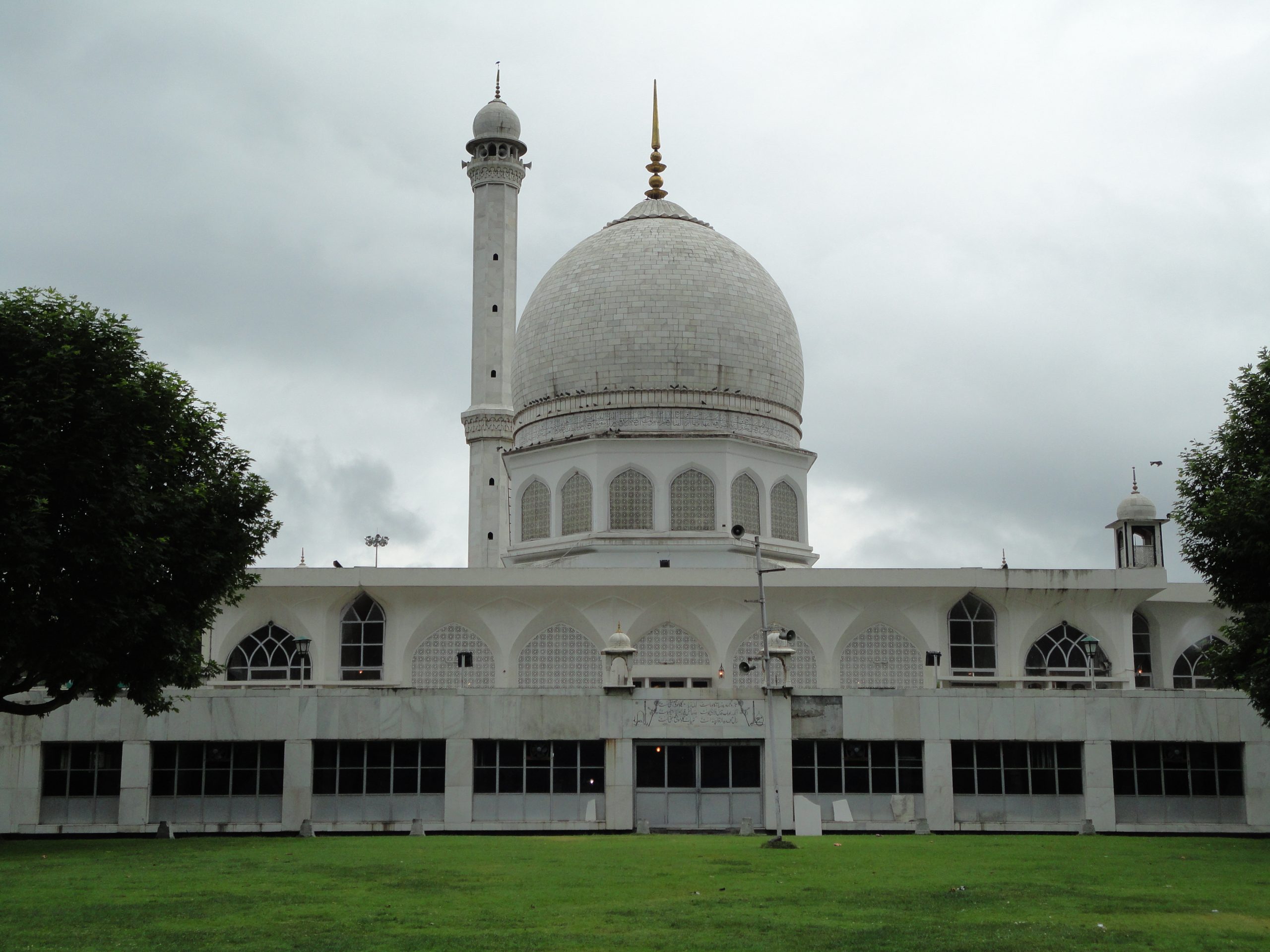 One of the largest and tallest mosques in Asia, Taj-Ul-Masjid’s interiors span an area of around 430000 square feet. The name literally means “The crown among mosques”, and the structure and beauty of the mosque holds evidence to the same. The mosque has a pink tinge to its facade. The central prayer hall of this mosque is decorated  with the fresco paintings and Islamic inscriptions. Non-Muslims are unfortunately not allowed in the premises. 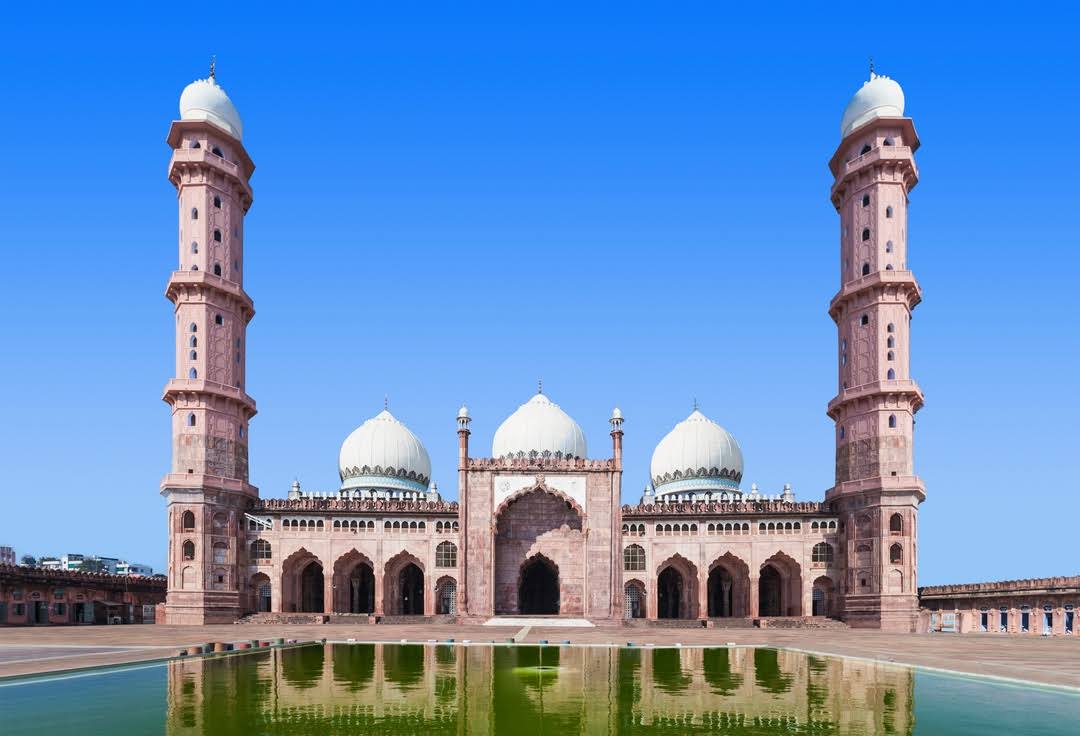 The Delhi mosque was built in 1528-1529 CE. It is built in red sandstone with marble embellishments. The structure is currently in ruins but still attracts visitors who appreciate it. The mosque has the tombs of two people Jamali and Kamali. Jamali was the alias of Sufi poet Shaikh Jamal Kamboh, howevee, Kamboh’s identity remains undiscovered. 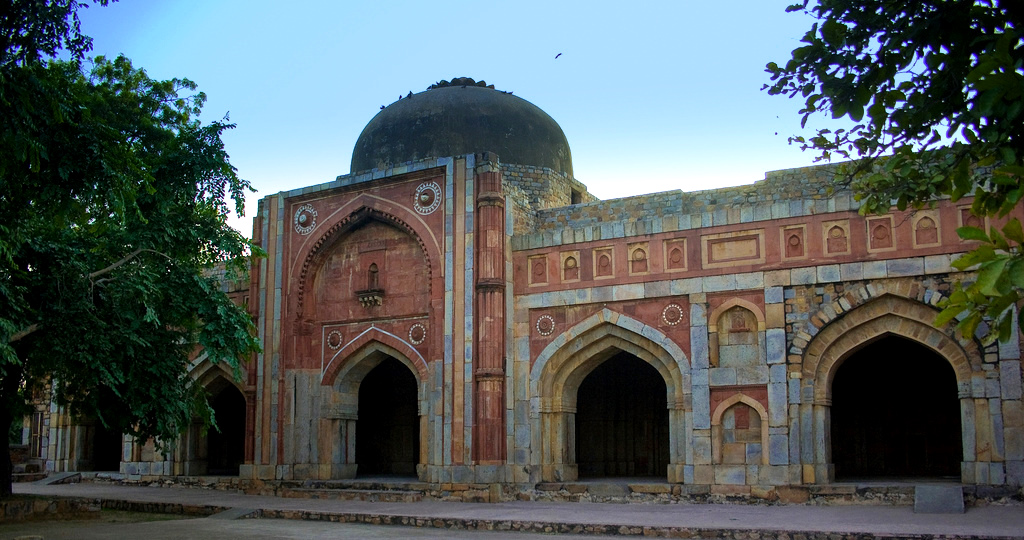 The Masjid was built around 629 CE and is considered the first in India. The mosque contains an ancient oil lamp which is said to have been burning for a thousand years. It is one of the most beautiful mosques in India. 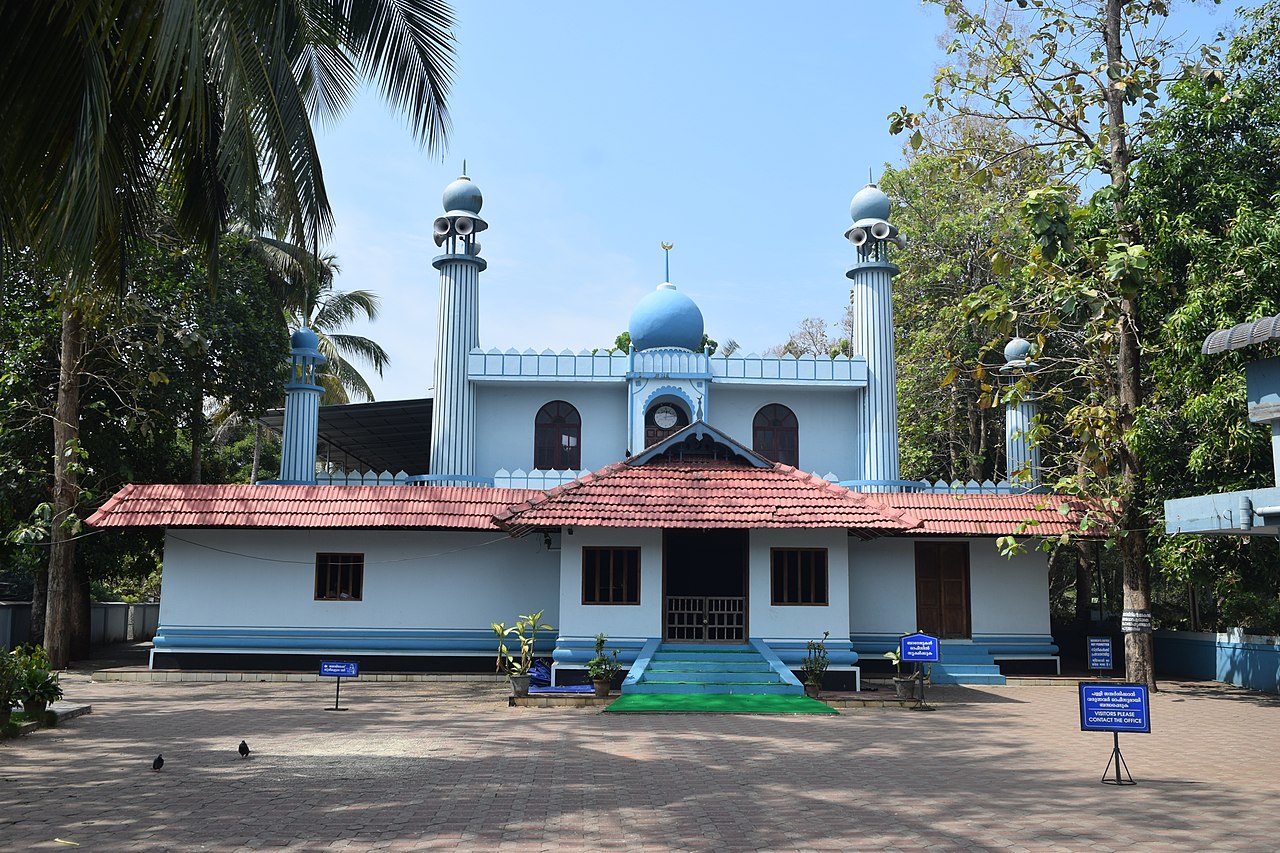 According to some myths, Adhai Din Ka Jhonpra was named so because under Muhammad Ghori’s orders, a Sanskrit institution was demolished and a screen built for Ghori to offer his prayers before within 60 hours( 2.5 days). It is one of the oldest mosques in India, and the oldest surviving mosque in Ajmer. It was founded by Qutb al-Din Aibak in 1192 CE, and beautified by Iltutmish in 1213 CE. The mihrab is built with white marble, and the seven arch screen, believed to have been included by Iltutmish is one of the most discussed features of the mosque. The intricate detailing of the design of the mosque has been praised by architecture aficionados.

The Ajmer Sharif was built by Mughal emperor Humayun in 1236 CE as a memorial for Gharib Nawaz Moin-ud-din Chishti, a Sufi saint revered by the royal family. It is considered to be one of the holiest places in the world for Muslims. It enshrines the tomb of the saint whose secular teachings made him extraordinarily popular. The tomb has been visited multiple times by Akbar himself, and has always been considered an important part of the lifestyle of the Mughal royal family. The pearly white dome with a lotus and a gold crown on top sets the tone for the peace that people, irrespective of their faith, derive from the mosque. It is one of the most celebrated holy places for Muslims. 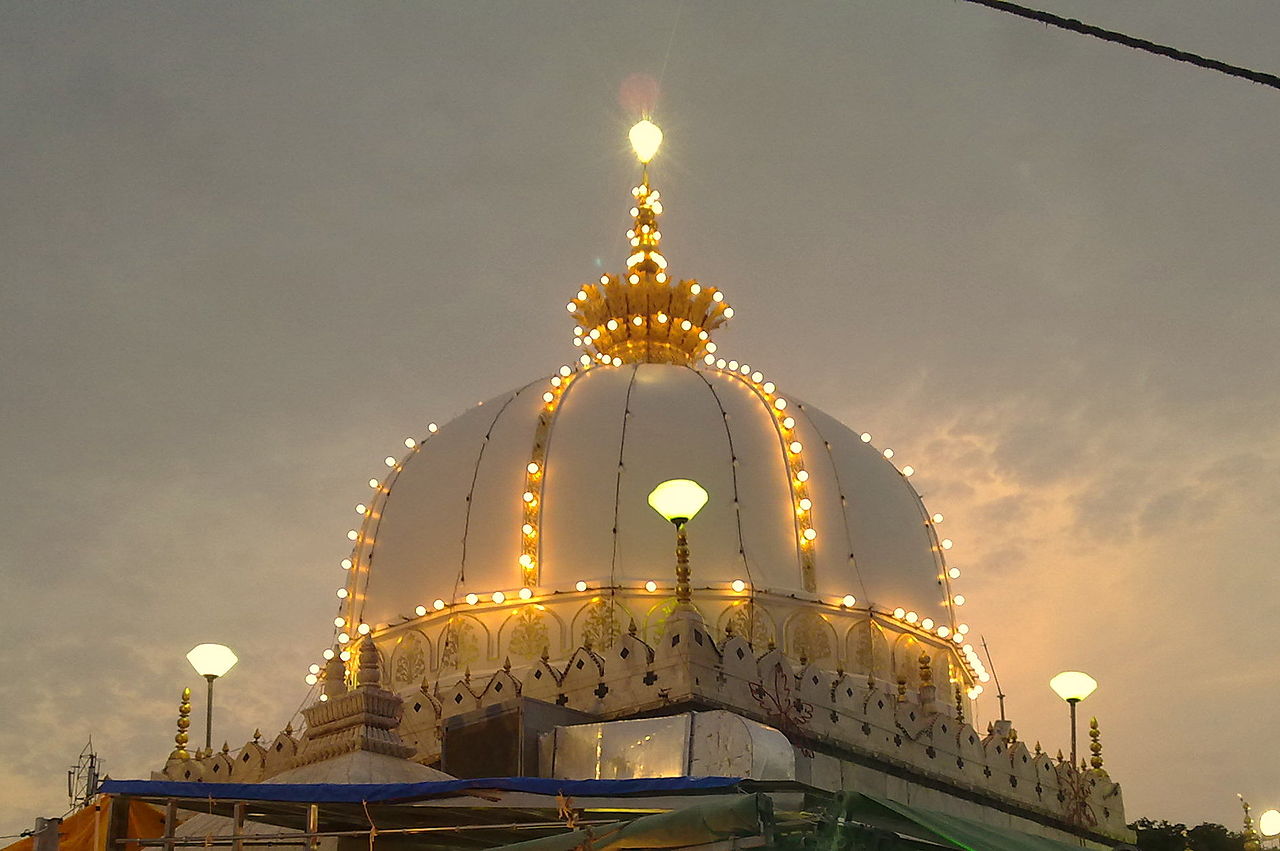 The Sheikh Salim Chishti Dargah was erected by Akbar to pay his final respects to the Sufi saint, Salim Chishti, the successor of Moin-ud-din Chishti, and the person after whom Prince Salim (Jahangir) was named. The tomb of the saint is a white marble structure enclosed by delicate jali screens carved out of marble with an incredible show of skill. A remarkable aspect of this architectural masterpiece are the serpentine brackets made to support the broad chajja on all four sides. 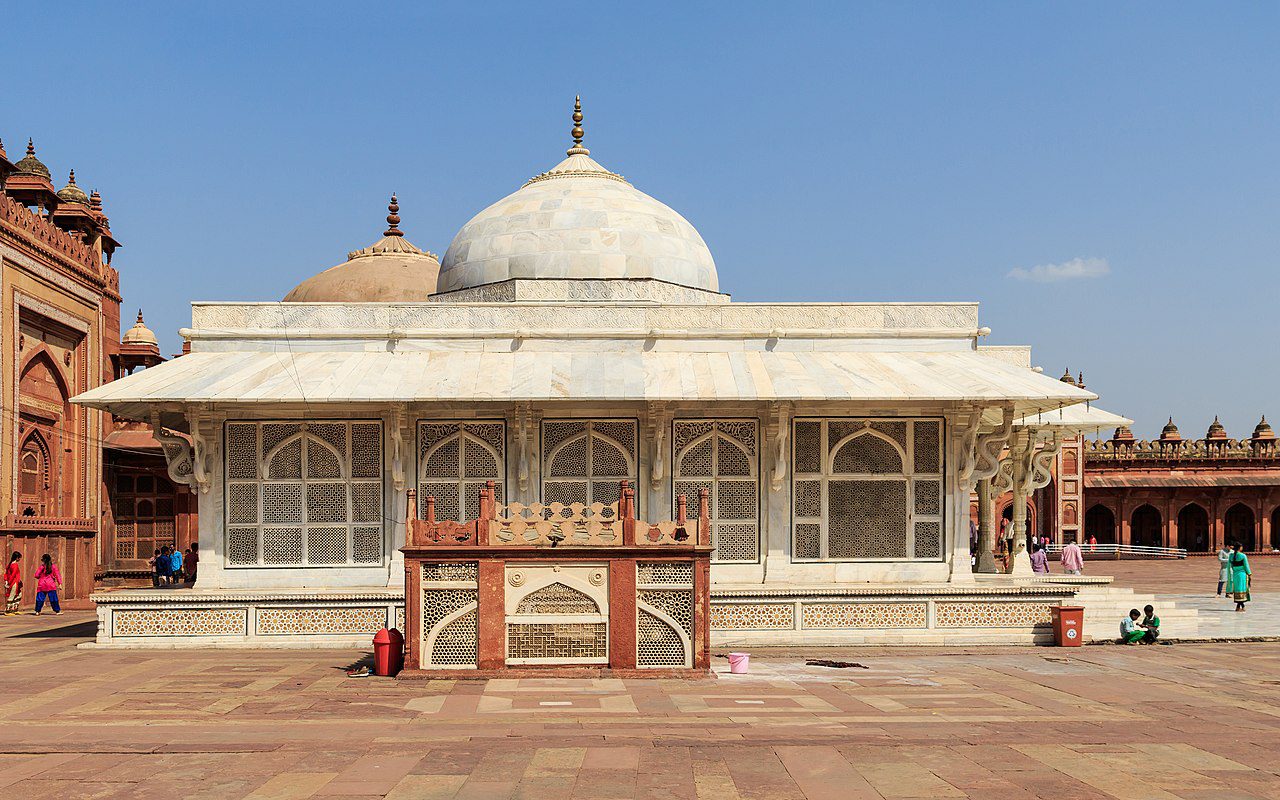 One of the largest mosques in the country, the Jama Masjid was built by Shah Jahan between 1644 and 1656 CE with a huge budget. The mosque still has three entry gates standing in place, and a massive courtyard that can accommodate approximately 25000 people simultaneously. The structure is made up of red sandstone and white marble. There are 899 black markings for the devotees. The Jama Masjid is one of the most celebrated and beautiful mosques in India. 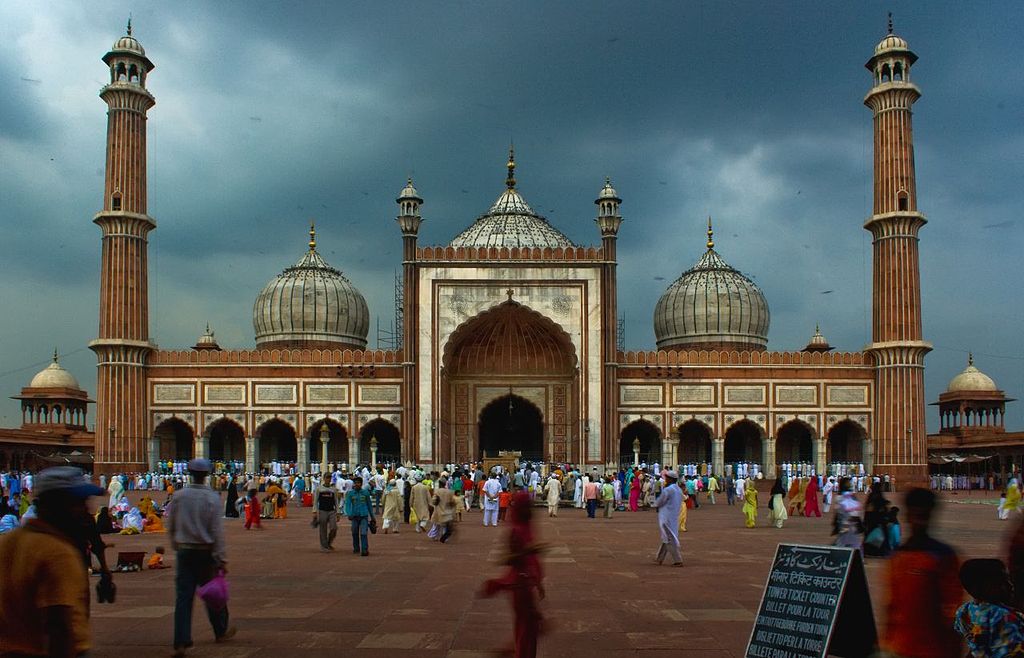 The Nagina Masjid in Agra is also known as the Gem Mosque or the Jewel Mosque. The Masjid is built inside the Agra Fort, the erstwhile residence of the Mughal royals. Shah

Jahan constructed the mosque between 1631 and 1640 CE. The beauty of the construction lies in its understated simplicity, built in pure white marble. 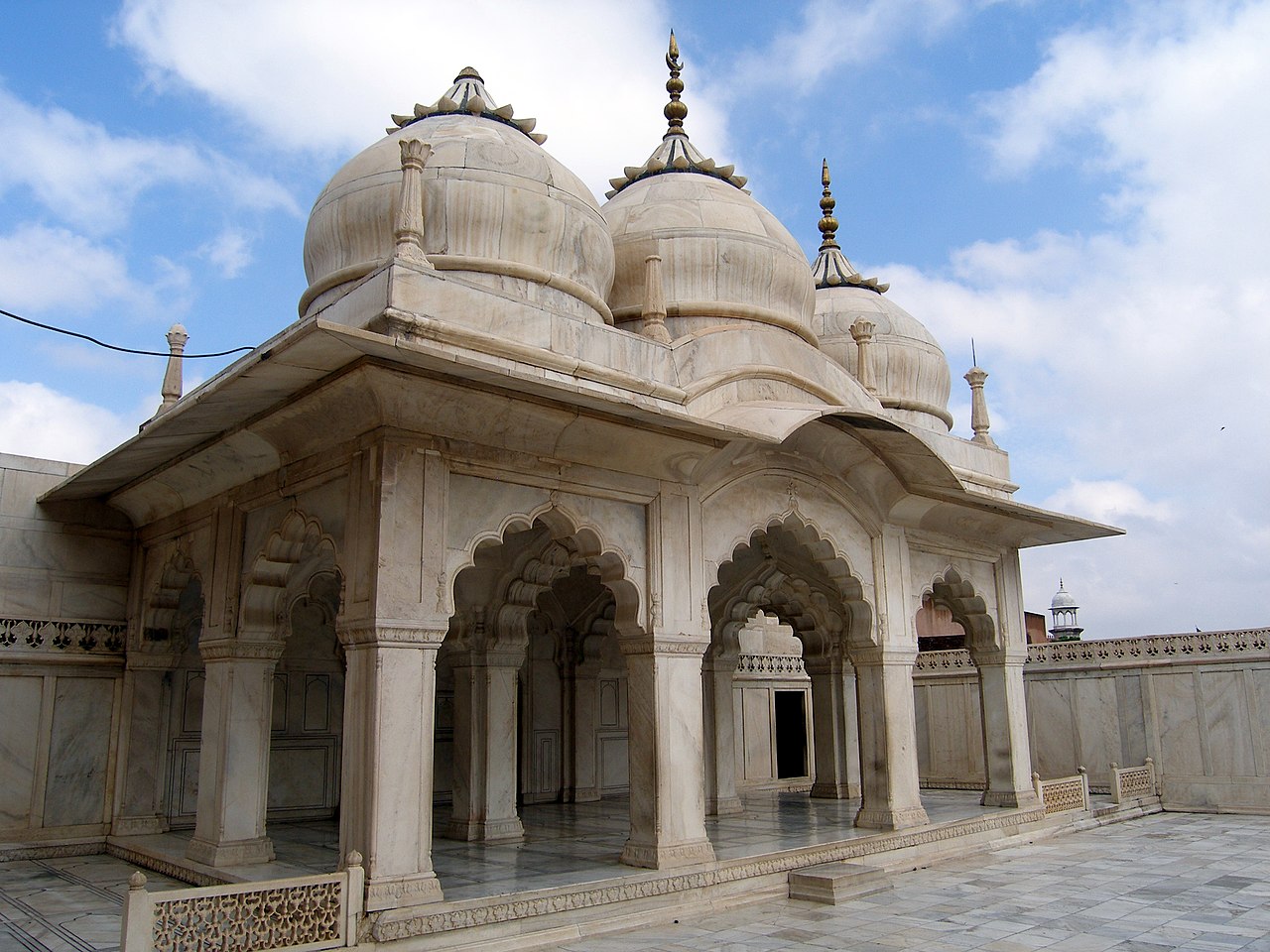 The Haji Ali Dargah was built as a memorial for Sayyed Pir Haji Ali Shah Bukhari. It is one of the most popular and beautiful mosques in India. It is located on an islet off the coast of Worli. The marble pillars feature coloured chips of glass arranged in kaleidoscopic patterns interspersed with patterns spelling out the ninety nine names of Allah in Arabic. The mosque is visited by people of all religions trying to get their wishes fulfilled.

Which Caribbean Premier League Team To Bet On?