Remakes are a trademark of Indian cinema, and Bollywood has had some of the greatest remakes that have enjoyed blockbuster status and critical acclaim. South Indian movies are incredibly diverse and every state has an incredible catalogue of its own, encompassing several different genres and amazing filmmaking. Out of the several movies that Bollywood generates in a year, a number of them are remakes of South Indian cinema. Here is a list of the most popular South Indian movie remakes in Bollyw0od, which you might have been unaware of and we are certain you will enjoy.

Also Read: 12 Best Hindi Movies on Netflix That Released In 2022

Ashutosh Gowariker wrote, produced, and directed the 2004 drama film Swades: We, the People in Hindi, an extremely critically acclaimed and one of the most popular South Indian movie remakes in Bollywood. Shah Rukh Khan, Gayatri Joshi, and Kishori Ballal play the key characters in the movie. Daya Shankar Pandey, Rajesh Vivek, Lekh Tandon, and Makrand Deshpande make cameo appearances. The two episodes of the television show Vaapsi on Zee TV’s Yule Love Stories (1994–1955), in which Gowariker portrayed Mohan Bhargav, served as the basis for the story. The 2003 Kannada film Chigurida Kanasu, which was based on the novels of the same name by Jnanapith awardee K. Shivaram Karanth and Bapu Kuti by Rajni Bakshi, is said to have influenced the plot of the principal character establishing a tiny hydropower plant to generate electricity. 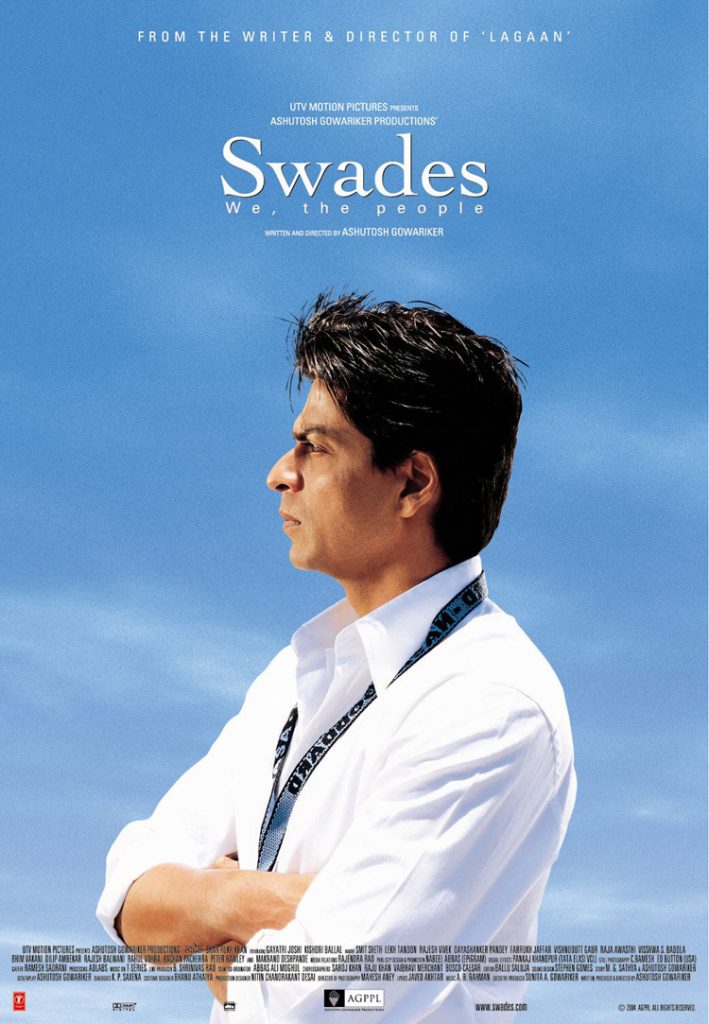 An Indian romantic drama film called Saathiya was released in 2002 in the Hindi language. It was directed by Shaad Ali and produced by Mani Ratnam and Yash Chopra under the Yash Raj Films label. Shah Rukh Khan and Tabu make lengthy cameo cameos in the movie, which features Rani Mukerji and Vivek Oberoi in the key roles. Gulzar wrote the lyrics, and A. R. Rahman created the soundtrack. It is a remake of the 1998 Tamil film Alaipayuthey, which was likewise directed by Mani Ratnam and included music by AR Rahman, and whose climax reportedly took inspiration from Sliding Doors. The movie was rated a Hit by Box Office India. 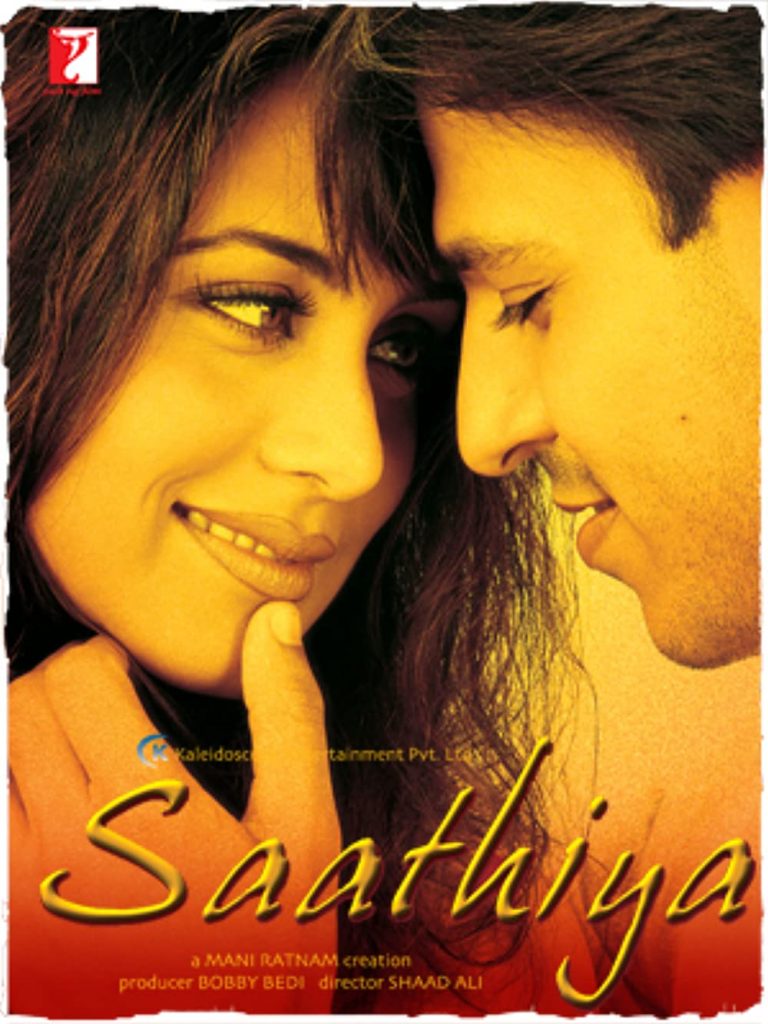 Another one of the most popular South Indian movie remakes in Bollywood is the political action movie Nayak: The Real Hero, that was released in 2001 in Hindi and was directed by S. Shankar and produced by A. M. Rathnam under the Sri Surya Movies label. Anil Kapoor plays the lead character in the movie; other cast members include Rani Mukerji, Amrish Puri, Paresh Rawal, and Johnny Lever. A remake of Shankar’s 1999 Tamil-language film Mudhalvan, it centres on Shivaji Rao Gaekwad (Kapoor), a television cameraman and later a television presenter, who inadvertently overhears and records the police’s conversation with Maharashtra’s Chief Minister Balraj Chauhan (Puri) to take a noncommittal stance during riots brought on by a fight between college students and a bus driver. Shivaji is asked to replace Chauhan for the day while interviewing him about the problems. 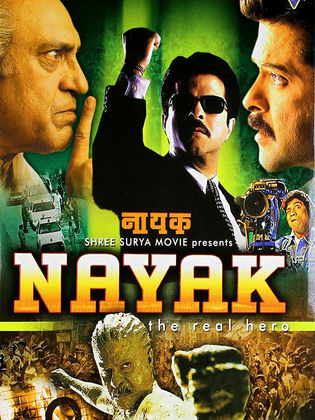 Tere Naam, is the title of Satish Kaushik’s 2003 Indian Hindi-language romantic action drama movie. Salman Khan and Bhumika Chawla make their Bollywood film debuts in the movie, which was written by Bala and Jainendra Jain. The movie is a replica of Vikram-starring Bala’s 1999 Tamil film Sethu. The movie was based on a true story of a friend of Bala’s who fell in love, went insane, and ended up in a mental institution. 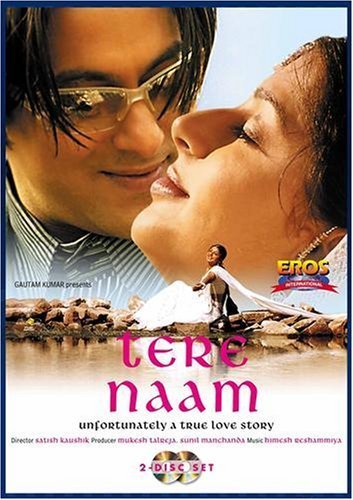 Bhool Bhulaiyaa is a 2007 Hindi-language comedy-horror movie that was made by T-Series and directed by Priyadarshan. The cast includes Akshay Kumar, Vidya Balan, Shiney Ahuja, Ameesha Patel, Paresh Rawal, Rajpal Yadav, Manoj Joshi, Asrani, and Vikram Gokhale. It is a remake of the Malayalam film Manichitrathazhu (1993). Ranjit Barot and Pritam, respectively, created the music and the film score, and Sameer and Sayeed Quadri wrote the lyrics. 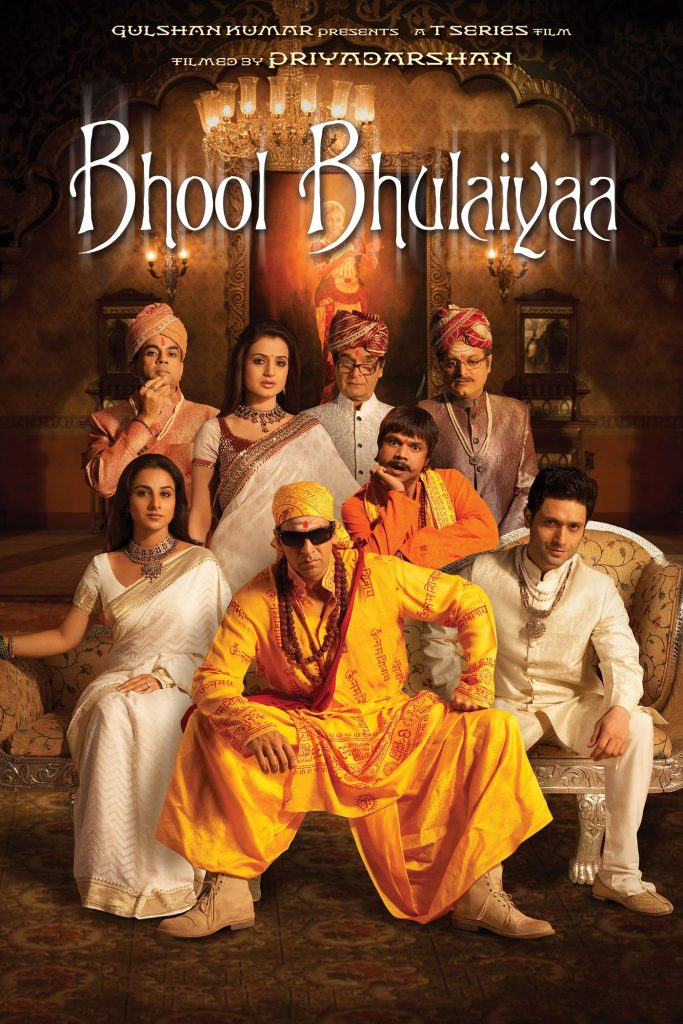 The comedy Hera Pheri, which was released in 2000 and was directed by Priyadarshan, starred Tabu, Paresh Rawal, Sunil Shetty, and Akshay Kumar. The movie is a remake of Ramji Rao Speaking from 1989 in Malayalam, which was based on the TV movie See The Man Run from 1971. A follow-up to the movie, Phir Hera Pheri, was released in 2006. It is the Hera Pheri franchise’s debut entry. Considered one of the best comedy movies in Hindi, Hera Pheri is easily one of the most popular South Indian movie remakes in Bollywood. 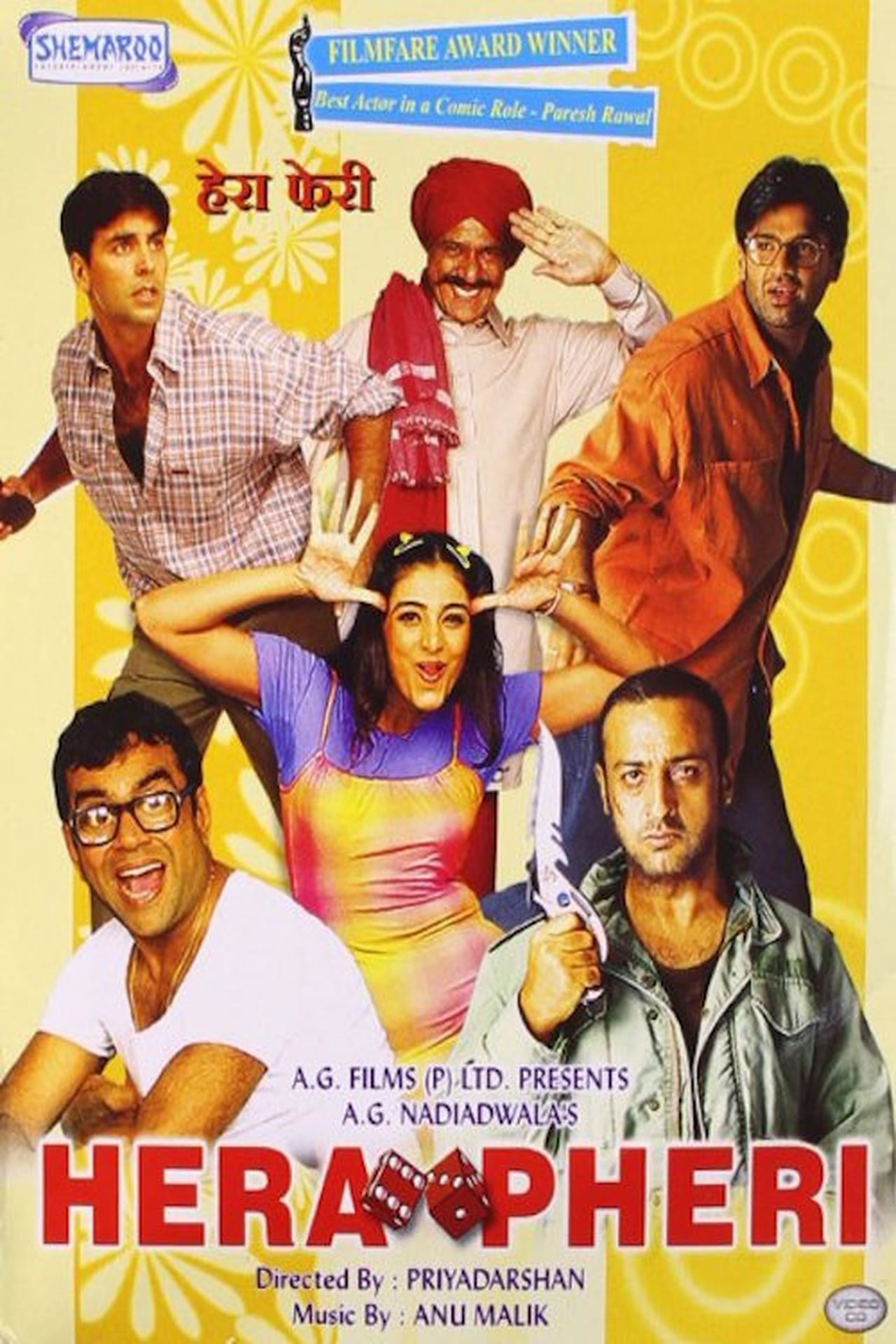 Rehnaa Hai Terre Dil Mein is often referred to by its initials The primary actors of Gautham Vasudev Menon’s 2001 Indian Hindi-language romantic drama film RHTDM are R. Madhavan, Dia Mirza, and Saif Ali Khan. The movie is a remake of the director’s original (same-year release) Tamil film Minnale, in which Madhavan appeared in a cameo. After making an uncredited appearance in a song sequel in the middle of the 1990s, Madhavan, a Tamil actor, makes his formal Bollywood debut with this movie. Dia Mirza is also making her feature film debut. The movie had gained cult status over the years despite not being a financial success when it was first released. 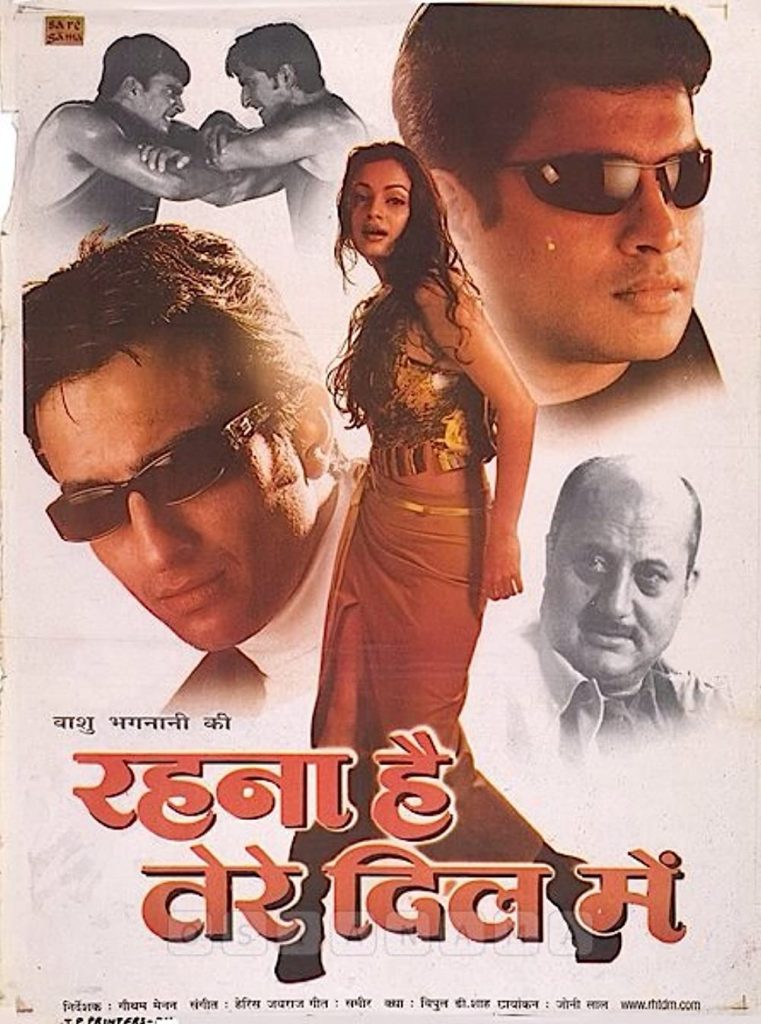 Singham is a 2011 Indian Hindi-language action crime film that was written by Yunus Sajawal and Farhad-Sajid and was directed by Rohit Shetty and produced by Reliance Entertainment. The movie, a remake of the 2010 Tamil film Singam by Hari, stars Ajay Devgn as Bajirao Singham, a station house officer turned police inspector, along with Kajal Aggarwal and Prakash Raj, who plays the same part from the original. Its blockbuster status makes it one of the most popular South Indian movie remakes in Bollywood. 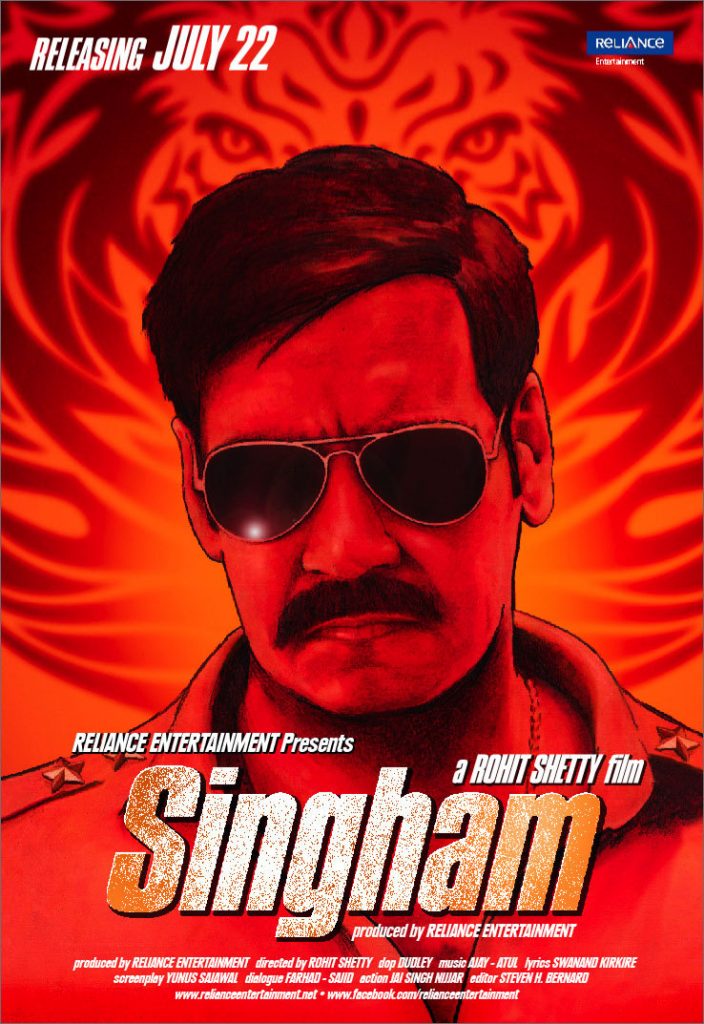 In 2005, Salem Chandrasekharan and A. R. Murugadoss released the action-thriller movie Ghajini in India. Suriya, Asin, Nayanthara, Pradeep Rawat, and Riyaz Khan all appear in the movie. The soundtrack and background music were written by Harris Jayaraj, and the film’s cinematographer and editor were R. D. Rajasekhar and Anthony. A businessman with anterograde amnesia who is on the rampage to avenge the death of his sweetheart is the centre of the story. The following April, production got underway, and it was finished in September of the same year. Two song sequences were filmed in Switzerland, while the rest of the movie was filmed in Chennai. 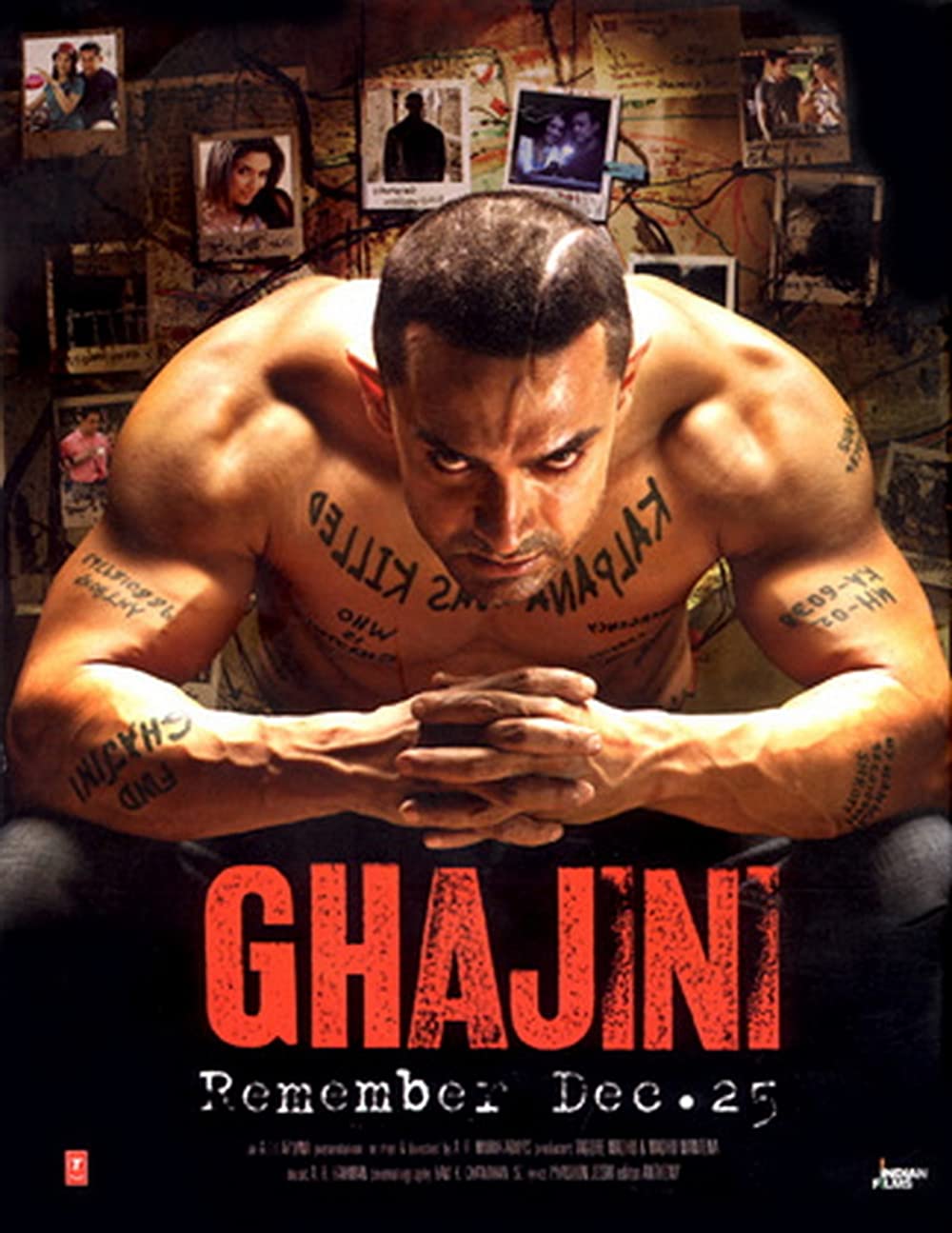 Salman Khan, Karishma Kapoor, and Rambha star in the 1997 Indian action comedy Judwaa, which was directed by David Dhawan and produced by Sajid Nadiadwala. It also has Kader Khan, Dalip Tahil, Shakti Kapoor, Deepak Shirke, Anupam Kher, Satish Shah, and Mukesh Rishi in supporting parts. The movie, which debuted on February 7th, 1997, did well at the box office. The movie is a remake of the Telugu film Hello Brother (1994), which was itself influenced by Jackie Chan’s action comedy Twin Dragons (1992) in Hong Kong. 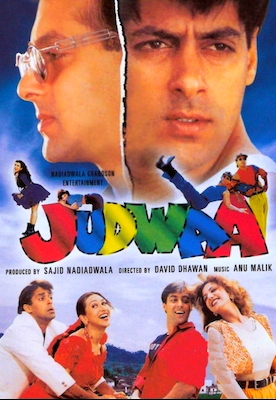 Jeethu Joseph wrote and directed the 2013 Indian Malayalam crime thriller movie Drishyam. Ansiba Hassan, Esther Anil, Kalabhavan Shajohn, Asha Sharath, Siddique, Roshan Basheer, and Neeraj Madhav play supporting roles alongside Mohanlal and Meena. For Aashirvad Cinemas, Antony Perumbavoor produced the movie. The struggle of Georgekutty and his family is followed, as they become the subject of suspicion after the disappearance of Varun Prabhakar, the Inspector-General of Police’s son. An incredibly constructed movie, it makes sense that Drishyam is one of the most popular South Indian movie remakes in Bollywood. 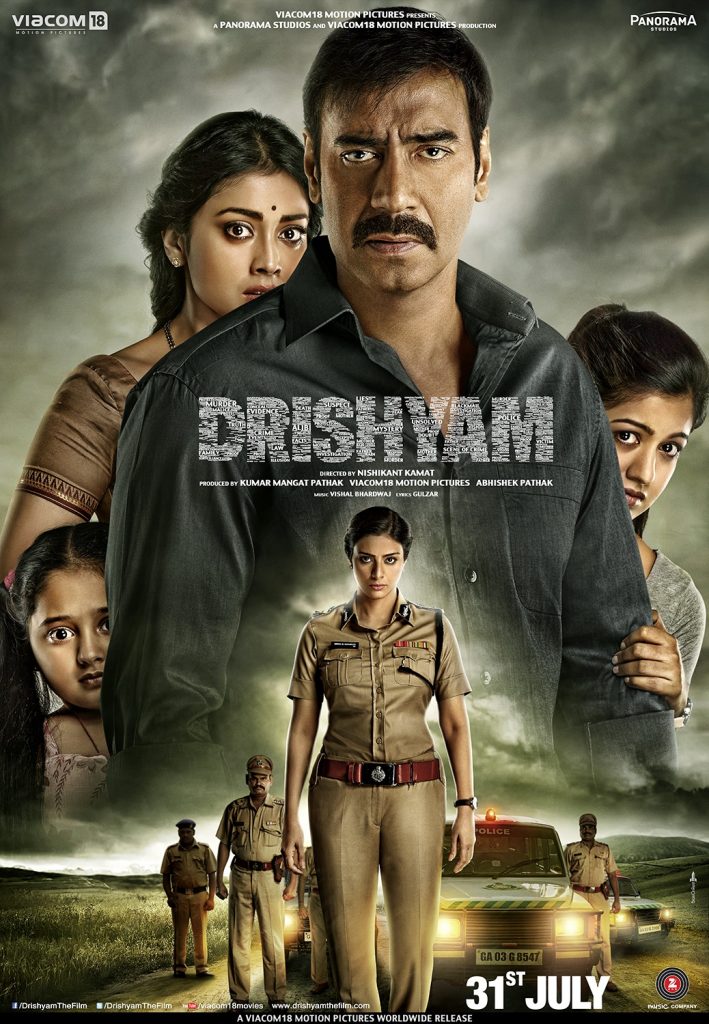 Chachi 420, is a 1997 comedy movie in Hindi that Kamal Haasan co-wrote, produced, and directed. The movie is a replica of the Tamil film Avvai Shanmughi from 1996. In addition to Tabu, Amrish Puri, Om Puri, Johnny Walker, Paresh Rawal, Rajendranath Zutshi, Ayesha Jhulka, and Fatima Sana Shaikh, Kamal Haasan and Nassar also reprise their roles from the original movie. 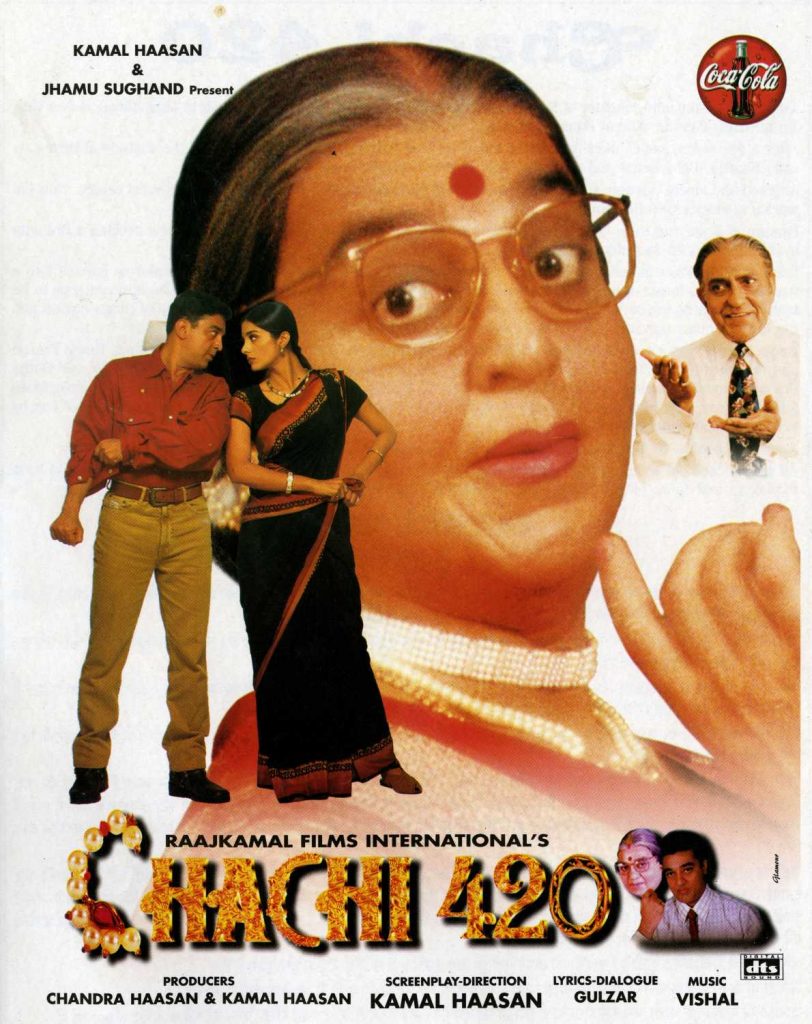 The 2011 Hindi-language romance comedy action movie Bodyguard was directed by Siddique and written by him, J.P. Chowksey, Kiran Kotrial, and Aloke Upadhyaya. Salman Khan and Kareena Kapoor act in the remake of the 2010 Malayalam film of the same name, which was directed by Siddique. Raj Babbar, Mahesh Manjrekar, and Hazel Keech play supporting roles. In the movie, bodyguard Lovely Singh (Khan) is assigned to follow Divya Rana (Kapoor) and develops feelings for Chhaya, Divya’s fictitious alter ego.\ 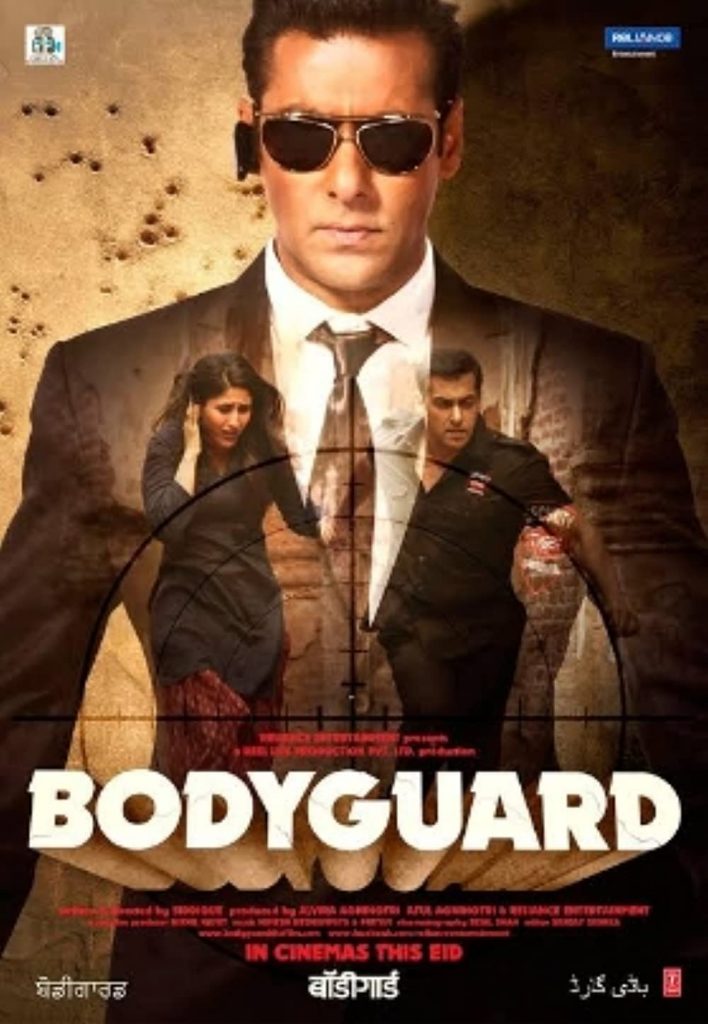 The 2009 Indian action thriller movie Wanted was helmed by Prabhu Deva. Salman Khan, Ayesha Takia, and Prakash Raj star in the remake of the Mahesh Babu-starring Telugu film Pokiri from 2006; Vinod Khanna, Mahesh Manjrekar, and Inder Kumar play supporting parts. Krishna Deva. Salim-Sulaiman handled the background music score, while Sajid-Wajid wrote the soundtracks. The entire movie was filmed in Mumbai, with the songs being shot in Australia and other overseas locations. \ The main character of the story is a local goon whose murderous instincts attract the attention of a wanted don as well as the ire of his lover and a corrupt police officer. 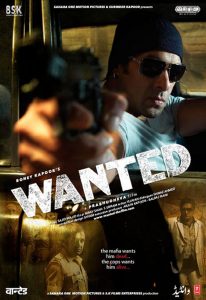 The narrative and plot of the 2017 Hindi-language love drama OK Jaanu were adapted from Mani Ratnam’s Tamil film O Kadhal Kanmani. The film was produced by Ratnam and Karan Johar under their respective labels, Madras Talkies and Dharma Productions. It is a remake of O Kadhal Kanmani, a Tamil film directed by Ratnam. The movie’s lead actors are Aditya Roy Kapur and Shraddha Kapoor. Other cast members include Naseeruddin Shah and Leela Samson—the latter of whom made her Hindi film debut here as well as in the original—who play the protagonists’ landlords. Playing Tara’s ex-boyfriend is Eesh Kakkar. The soundtrack and score of the movie were written by A. R. Rahman. The film’s lyrics and dialogue were penned by Gulzar. 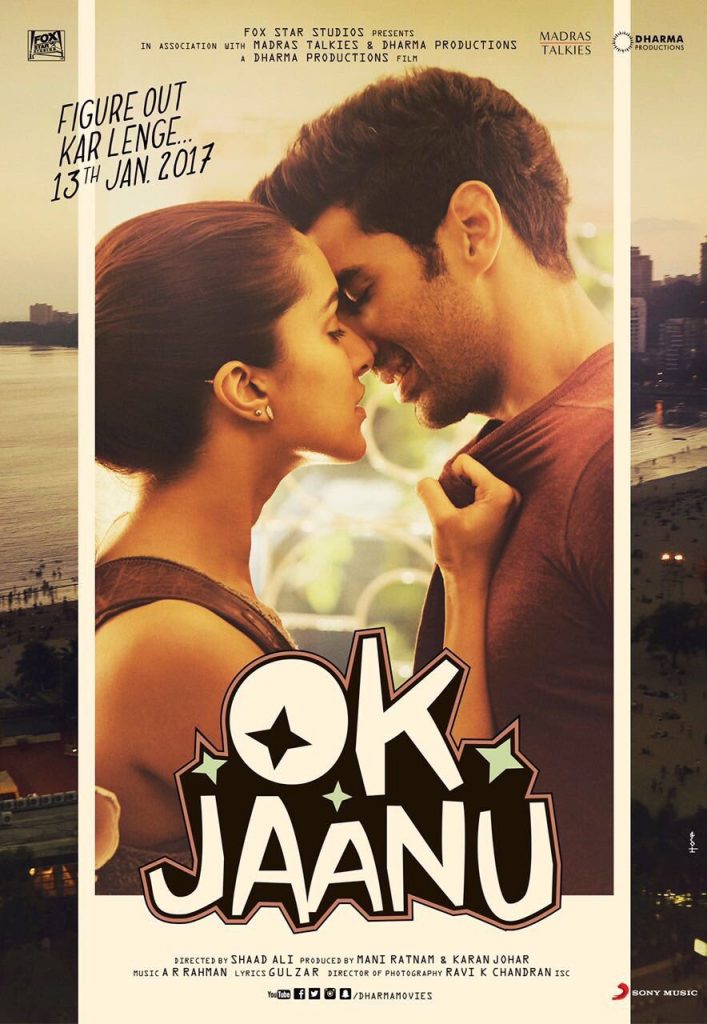 All these movies which have been developed or remade from pre-existing South Indian movies have an essence of their own, and yet retain the good parts of the originals. We hope this list of the most popular South Indian movie remakes in Bollywood help some of these classics to make their way into your watchlist, also made you find out something new, and piqued your curiosity about the originals.