India is known internationally as this hub of spices that translates into its cuisines, which are enormous in number, by the way. Because India is a country of many people, and incidentally many cultures, whose food habits are sometimes entirely different from one another, our country is blessed with a kind of variety of food that is simply unmatched. Which is why if you’re ever visiting India, the food is something that should excite you without doubt. With that, we bring you 15 must-try Indian street foods that you must not miss when you’re here next.

Also read: The 10 Most Popular Festivals Of India That We Love To Celebrate!

Now, let’s read about the must-try Indian street foods for every traveller:

Probably the most loved Indian street food of all time, Pani Puris are made with flattened dough which puffs up into a round ball once fried. The round ball, or the puri, is then filled with a stuffing: most commonly mashed potatoes and boiled chickpeas, and is then filled with a spicy flavoured water, which is usually made with tamarind, mint, and coriander. Over time, other novelty variants of Pani Puri have popped up: cheese pani puris, chocolate pani puris, and even chicken pani puris aren’t unheard of and can now be found in most cities. 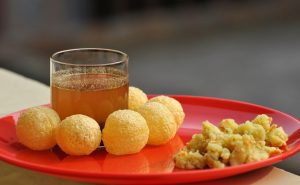 While these are three distinctly different street foods, they do have one thing in common. Idli, Vada, and Dosa are all made with rice-based or legume-based batters. For making idlis, this batter is steamed. The cooked idlis are then eaten with chutneys and sambar. For making vadas, the batter is deep-fried, and Vadas can also be eaten with chutneys and sambar. And as for the humble dosa, the batter is spread out flat on a sizzling hot cast iron, which is then cooked until the dosa is crispy. Dosas can be eaten by themselves with chutneys and sambar, or can be filled with mashed potatoes or other veggies. Like Pani Puris, there are different variants of Dosa as well – beginning from Cheese Dosa to Pizza Dosa. Idli, Vada, and Dosa are some of the must-try Indian street foods you should eat when visiting South India. But they’re so popular, you could probably find a decent vendor anywhere in India. 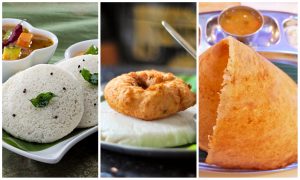 While not as flashy as the rest of the items on the list, Jhal Muri is a humble snack that you can find in the Eastern Indian belt. Jhal Muri is made with puffed rice, which is then tossed along with a number of chutneys, diced chillis, onions, peanuts and coconut. 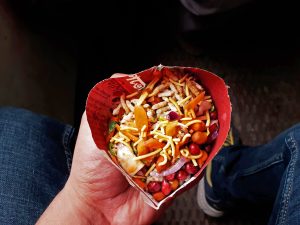 You’d be astounded by the varities of chaat you’d find across India. Some like their chaat with puris, some with samose, some with kachoris, and some even with bhel. In one way, Chaat is symbolic of what India is like as a country – it has a number of cotrasting flavours, is adorned with various colours, and is made differently by people across the country. Which is why the Indian chaat is one of the must-try Indian street foods you shouldn’t miss out on when you’re here next. 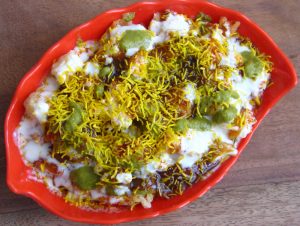 While Jalebi is the only sweet item in the list, it is also one of the most popular Indian sweets in general, and is predominantly a street food. Jalebis are best enjoyed with rabdi or dahi, and are super fun to munch on while you’re on an early morning stroll because that’s when most vendors start preparing Jalebis. They’re also a great breakfast option if you’re the kind of person who prefers a sweeter breakfast. 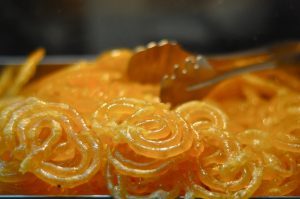 You may have heard of Dahi Vada, but Dahi Vada Aloo Dum is a snack you can find only in and around Odisha. The popular street food combines Dahi Vada, which is basically Vada soaked in spiced yoghurt, and Aloo Dum, a curry made out of baby potatoes. And whil the two sound disparate, they actually taste pretty great together, and are loved by the locals. 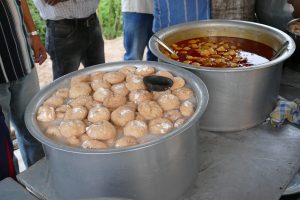 A distant cousin of the much popular Samosa – a Kachori is a similar deep fried snack which is filled with potatoes or lentils. While the Samosa wrapper is slightly thinner, Kachoris are made with a thicker wrapper which is flaky and layered. Kachoris can be found almost anywhere in India, but its roots can be tracked back to North India. Kachoris are often eaten with chhole. 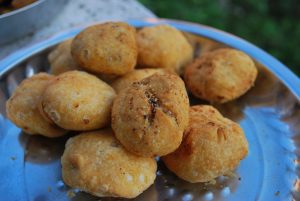 While not originally an Indian street food, Momos are still extremely well-liked in India. The roots of the popular snack can be traced back to Nepal; the recipe was then co-opted by North Eastern states, and the snack eventually travelled to Northern India and especially Delhi, where it became so insanely popular that momos can be now found everywhere in India. Momos are like most dumplings – they come in a wrapper, they’re stuffed with meat or veggies, and they’re steamed. Momos are best eaten with spicy garlic and red chillies chutney. 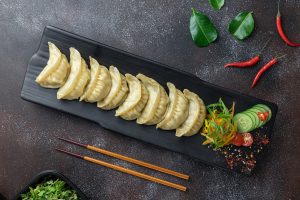 The humble bread pakora hasn’t received its due, and that is probably because it doesn’t exactly call for a complicated recipe like the rest of the items in the list. Bread pakoras can be made rather easily by dipping a slice of bread in a batter of besan, and then frying it till its golden brown. Bread Pakoras may also be stuffed with potatoes. In any case, bread pakoras are easy to replicate at home, but at the same time, there’s really no matching the happiness one gets when eating some great street food. 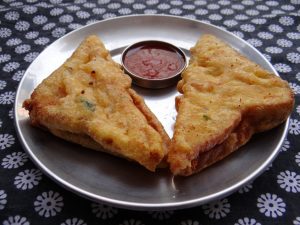 One of India’s most favourite snacks, the Pav Bhaji is simply beautiful to look at – the buttered bun, along with the fiery red bhaji with a dash of butter on top of it – that’s the stuff of dreams. “Pav” is a kind of soft bread, similar to the west’s dinner rolls, which can be eaten by itself with some butter, but since Indians hardly enjoy uncomplicated things, it is turned into a variety of snacks, Pav Bhaji being one of them. Bhaji is a curry made out of a number of veggies that are mashed together with spices into a smooth consistency. Pav Bhaji is often served with diced onions tossed in lemon juice. 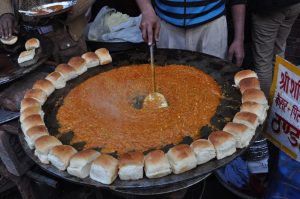 Another snack made out of the Indian “Pav”, the Vada Pav is often referred to as the poor man’s burger. A patty of potato is coated in Besan batter and deep fried, and then, like in a burger, the patty is placed between the two slices of Pav. Because it is so ridiculously cheap, people are often seen thronging Vada Pav stalls and may even make a meal out of this humble burger. 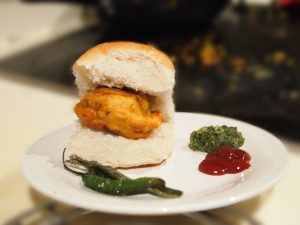 While most countries have their own versions of flatbreads and rolls, as Indians, we can oly vouch for the flavour-party that is a Kathi roll. While it was first popularized in Bengal, the snack can now be found almost anywhere in India. The rolls are made with lachchha parathas, a flaky, layered flatbread, which is then filled with meat or veggies, along with sauces and chutneys. 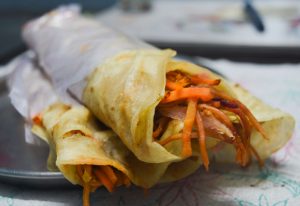 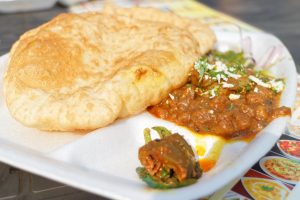 There’s no doubt that Delhi is not just the capital of India, it’s also the best city to explore for street food. Chhole Kulche can be found only in Delhi – at least the best ones! Kulcha is a flat bread made by proved or risen dough which is then flattened and cooked in a tandoor. Chhole, as mentioned above, is a chickpea curry. Chhole Kulche are of the must-try Indian street foods, especially when visiting Delhi. 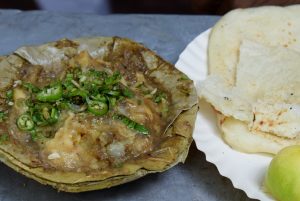 While the Samosa did not originate in India, it for sure is exceedingly popular in the Indian subcontinent. Samosa is a fried snack which is filled with potatoes or meat. But that doesn’t mean that varieties do not exist – one can find paneer samosas, or even chinese samosas, which have become extremely popular of late. 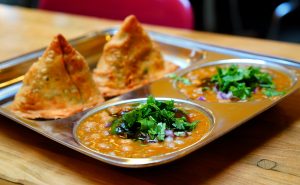 We hope you’re able to get your hands on these must-try Indian snacks when you’re in India next. Comment below to tell us what you’d want to try first!

18 Best Scenes & Dialogues From 3 Idiots That’ll Stay With Us Forever!