When we think of brave heroes, we usually concoct a masculine figure in our head, resolute and bold, strong in his form and with determination in his eyes. But bravery isn’t exclusive to men or masculinity – even the most feminine of women can be stronger than the world’s most feared armies. At least some are – Noor Inayat Khan sure was. A direct descendent of Tipu Sultan, the 18th century ruler of Mysore, Noor was the first female wireless operator sent from the UK to occupied France during WWII.

Also read: The Story Of Nangeli And The 19th Century Travancore Breast Tax

Noor Inayat Khan was born in Moscow to a mixed race couple during an especially tumultuous time in History. Her father, Inayat Khan, was a direct descendant of Tipu Sultan, an erstwhile ruler of Mysore. Noor’s mother, on the other hand, was an American woman named Ora Ray Baker who officially changed her name to Pirani Ameena Begum after marrying Inayat Khan.

Merely seven months after Noor’s birth, the first world war broke out in July 1914. The family left Russia for London shortly before the war had begun, starting a new life with their new-born daughter who’d be soon joined by three more siblings. The family relocated again in 1920, this time moving to Paris. 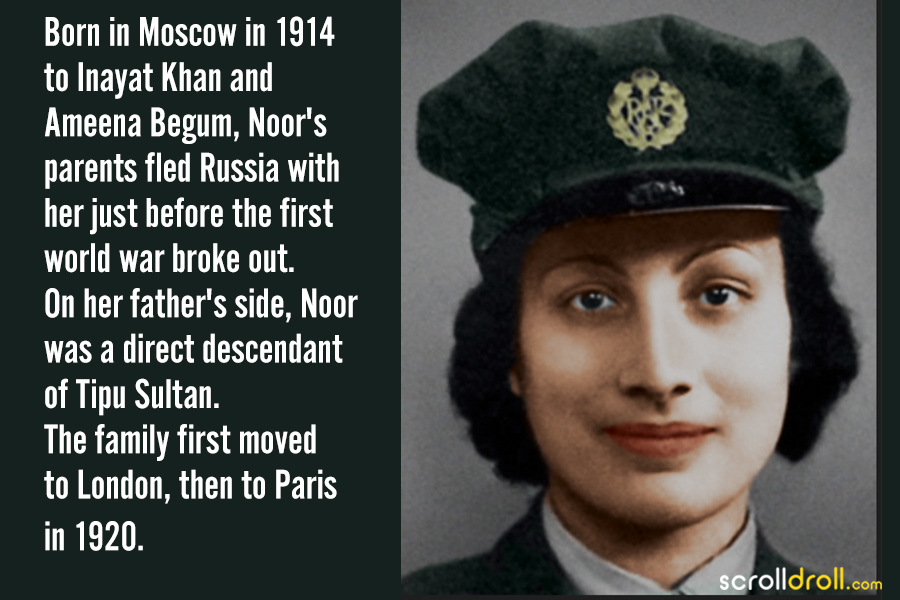 Noor’s father, Inayat Khan, was a musician and spiritual guru in the Sufi tradition. In 1927, when Noor Inayat Khan was only 13, her father died while he was touring India. Ameena Begum, who was a thoroughly devoted wife, was grief stricken after her husband’s passing. Thus Noor, being the eldest child in the family, despite her own young age, took the responsibility of looking after her mother and her younger siblings. 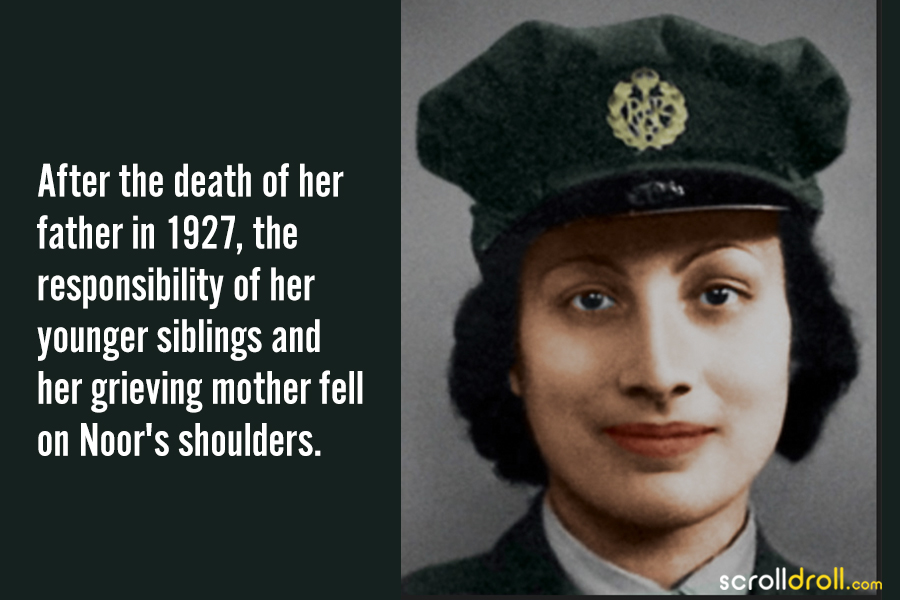 As a young woman, Noor went on to study child psychology at the Sorbonne. She also studied music at the Paris conservatory; she composed for both the harp and the piano. She even became a published writer – with her 1939 book, Twenty Jataka Tales, being the most noteworthy. 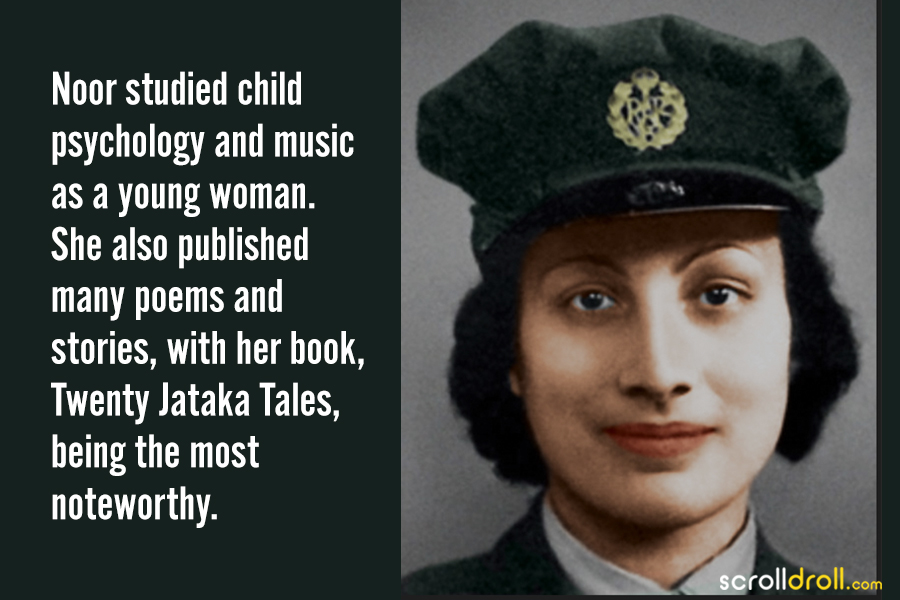 However, with the outbreak of the second world war, Noor’s family had to flee again, as France was invaded by German troops. The family went back to England, shortly after which Noor decided that she didn’t want to sit back as the war unfolded. She wanted to do something.

Noor Inayat Khan grew up in a spiritual family – she believed in Mahatma Gandhi’s idea of non-violence. Even though she was a pacifist herself, she couldn’t sit and watch the fascists who were out to take over theu world she lived in. In 1940, Noor joined the Women’s Auxiliary Air Force (WAAF) and was sent to be trained as a wireless operator. 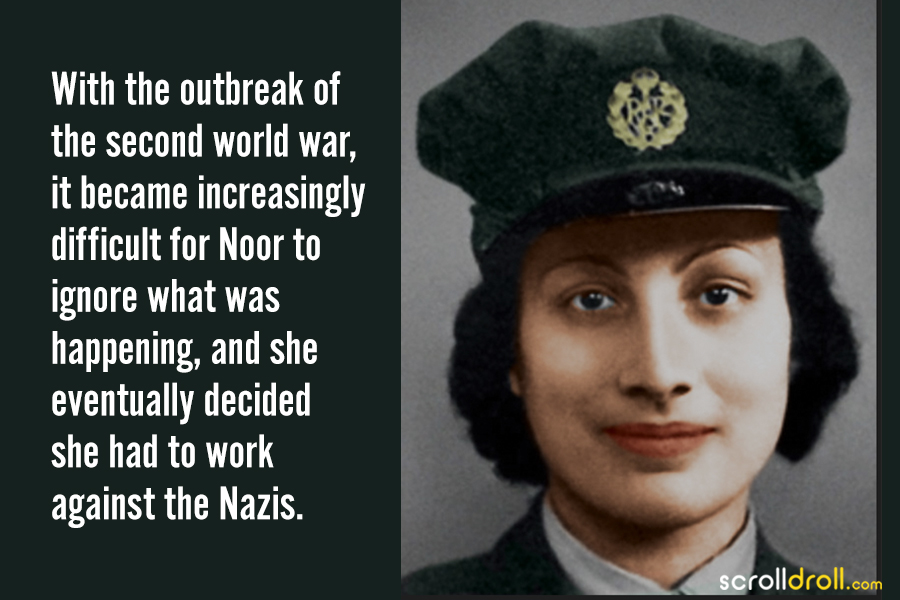 Later, she was appointed to join F (France) Section of the Special Operations Executive and was posted to the Air Ministry in early February 1943. She was later sent to Aylesbury, Buckinghamshire to be trained as a wireless operator in occupied territory. Noor would be the first female agent to be sent over in that role – before her, all female agents were sent as couriers.

Over the course of the next few months, Noor Inayat Khan was trained thoroughly, keeping in mind the extremely dangerous nature of her mission. She was even put through the Gestapo (Official secret police of Nazi Germany) interrogation as part of her training to prepare her for the possibility if she were to be caught. According to Noor’s escaping officer, she did rather terribly at her tests – she was nervous to the point of physically shaking and quite visibly terrified during the interrogation. 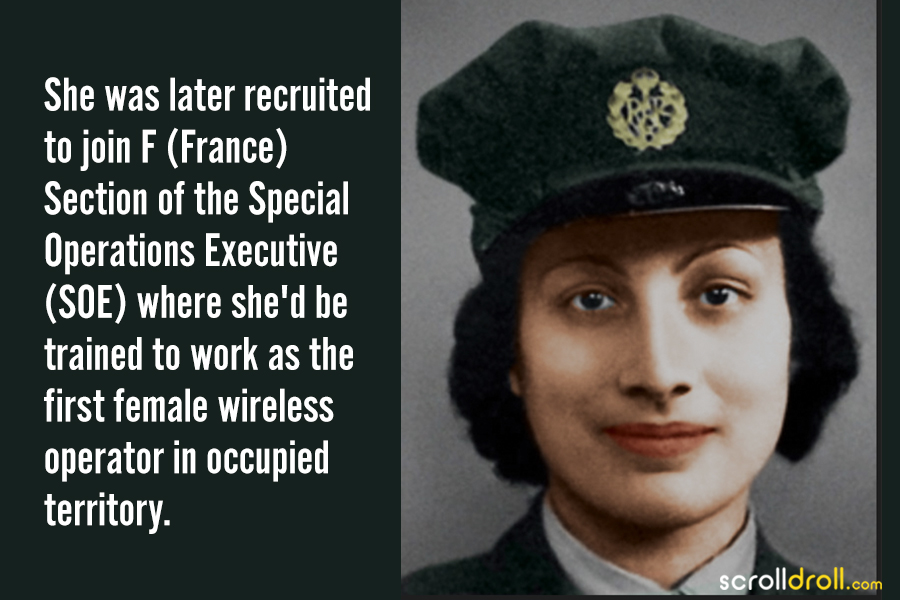 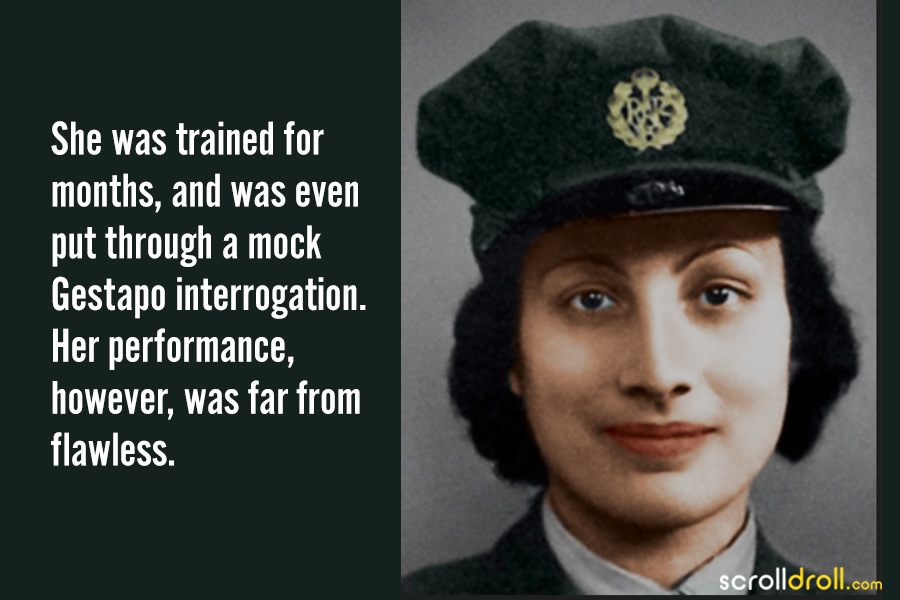 Her training officers and superiors – although agreeing that Noor definitely wanted to be useful and worked really hard to make up for her natural femininity and shyness – were of mixed opinions when it came to her being ready for the field. Her superiors weren’t exactly thrilled about sending her off – Vera Atkins, the intelligence officer for F Section even offered to graciously transfer her to a different job, assuring that it wasn’t going to cause her any embarrassment.

Noor Inayat Khan, however, rejected the offer – she seemed to be gloomy about going away, but she informed Atkins that over the last few weeks, the thought of leaving behind her widowed mother had been troubling her. She told Atkins to only contact her mother in case they were certain Noor was dead so as to not cause her any unnecessary pain. Assured of her willingness to do the job, Atkins gave Noor the go-ahead. 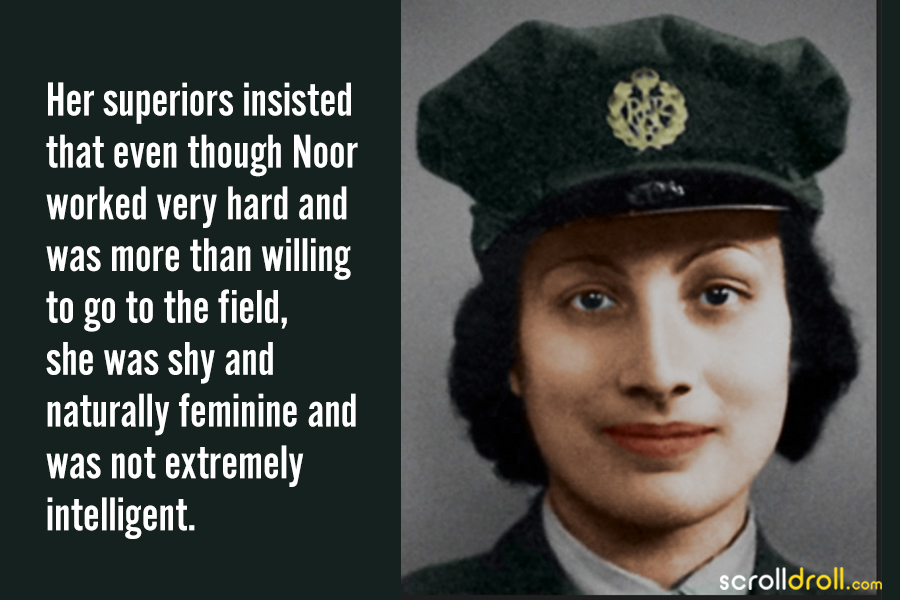 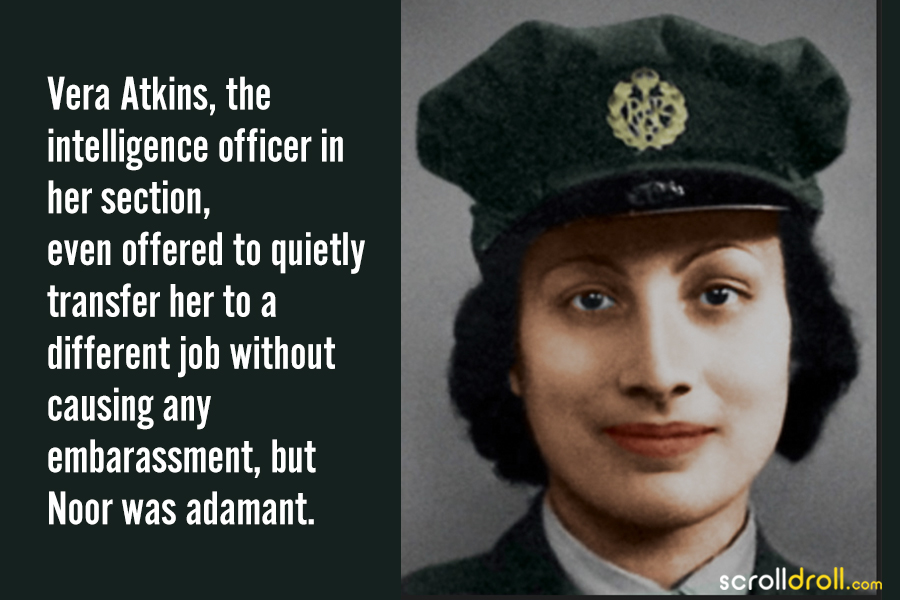 Noor was promoted to Assistant Section Officer and was flown to Nazi-occupief France. Code named Madeleine, Noor was received by Henri Déricourt in France. Noor, along with a couple of other female agents, had landed between 16th and 17th June in France. But in only about a week, by 24th June, that is, the Germans had already caught the scent of their network.

It was apparent that Noor Inayat Khan, along with some other female agents, had been betrayed by someone on their side – most likely by either Henri Déricourt or Renée Gary, a sister of French informant Emily Garry who had been working with Noor. 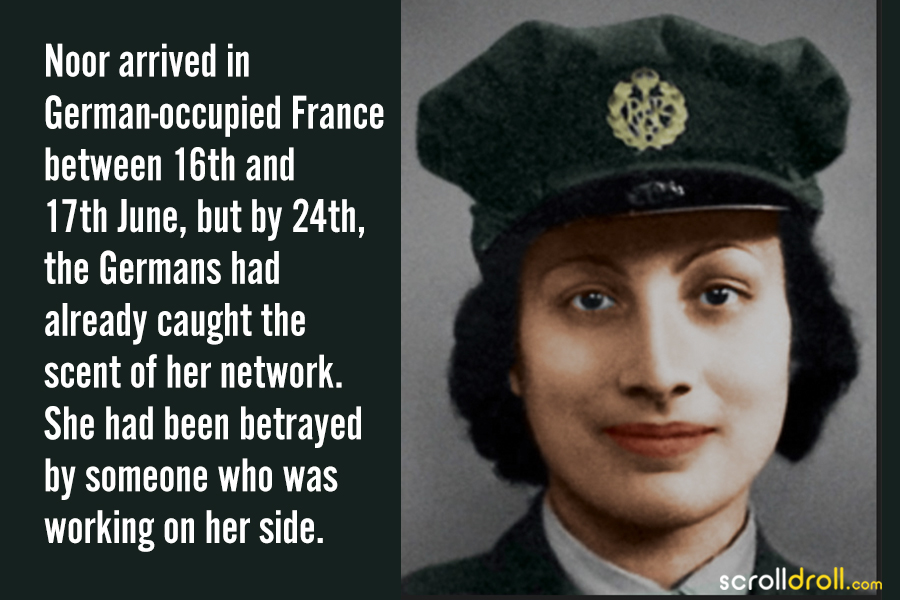 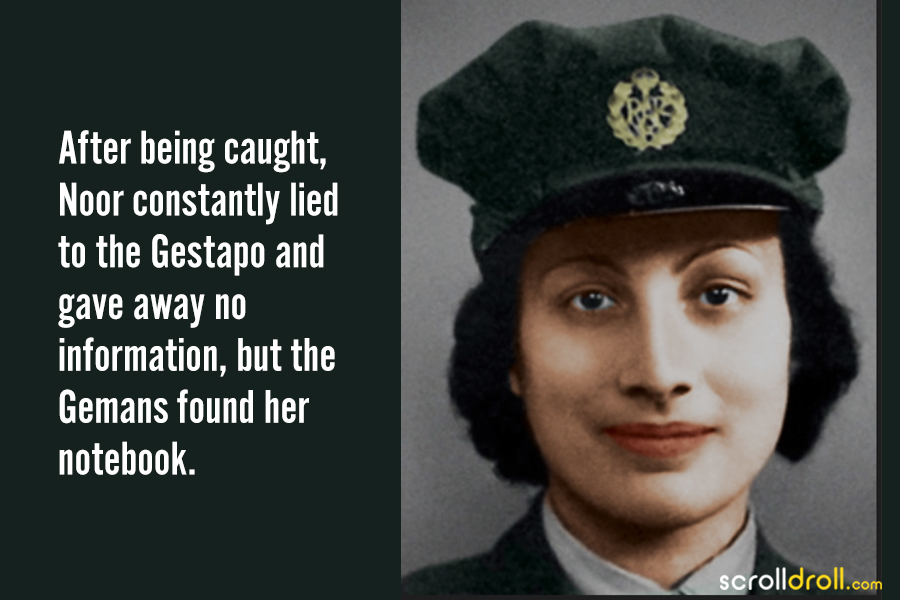 Around 13th October 1943, Noor was arrested and taken for interrogation. She continuously lied to the Gestapo, not giving them any piece of information at all, and attempted to escape prison twice. However, the Germans did find her notebook, where Noor had taken down all her messages against regulations, probably because she misunderstood her orders due to the rushed nature of her training.

Noor was abruptly transferred to the Dachau Concentration Camp along with some other agents – Yolande Beekman, Madeleine Damerment and Elaine Plewman and on the dawn of 13th September 1944 – only a month before one year of imprisonment, all four women were executed. Her last days had been nothing short of hell – she was allegedly constantly tortured and abused while she was in captivity. 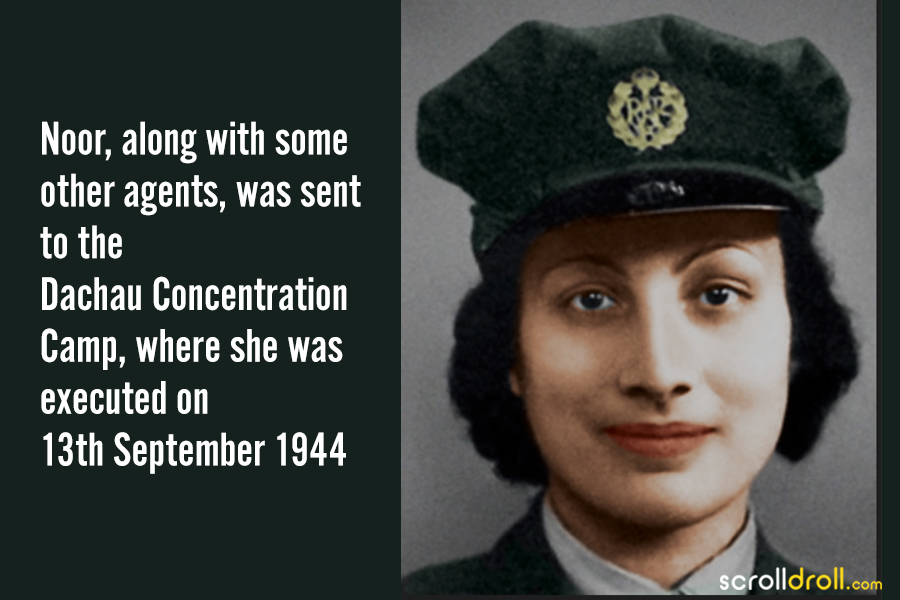 In 1949, Noor Inayat Khan was awarded the George Cross, the highest civilian decoration in the United Kingdom, for her service in the SOE.

Even though she wasn’t cut out for the job, Noor’s sheer willingness to put her life on the line to help the right cause has immortalized her in the memory of many. Check out other Forgotten Stories on our website for more tales of bravery!

These 14 Viral RCB Memes Are Nothing But Royally Hilarious