One of the most well-known party games of all time is Dumb Charades. The most challenging aspect of this game is coming up with movies for the opposing team, not performing. We make the task easy for the participants by giving them movie titles that the other teams may act out. If you are looking to win a game of dumb charades, look no further. This list of the most bizarre and difficult old Hindi movie names for dumb charades will guarantee you a win!

1. Teri Maang Sitaron Se Bhar Doon (1982)
Kamini has numerous challenges in her life in order to provide for her daughter. Things take a turn for the worst when a thug tries to assist her. 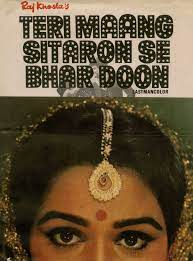 2. Salim Langde Pe Mat Ro (1989)
Salim, a physically disabled man from a lower-middle-class household, aspires to be wealthy. In exchange for a large quantity of money, he is urged to incite a riot against his own town. 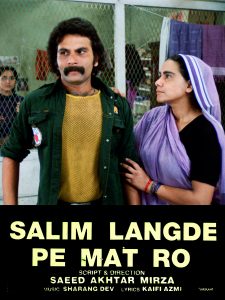 3. Akeli Mat Jaiyo (1963)
Seema, who begs the charming Rajendrakumar to play the role of her lover in order to impress her friends, falls head over heels for him. When she discovers his true identity, things go from bad to worse. 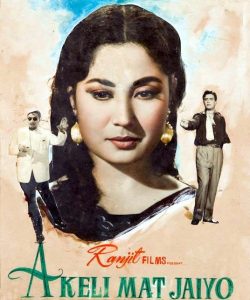 4. Sasti Dulhan Mahenga Dulha (1986)
Radheyshyam is humiliated since he is unable to secure a dowry to marry his three daughters. His daughters are enraged by the humiliation and flee to find their own identities. 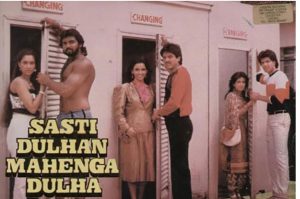 5. Murde Ki Jaan Khatre Mein (1985)
A film about two couples. The boy dies, but the girl acts as if he is still alive. 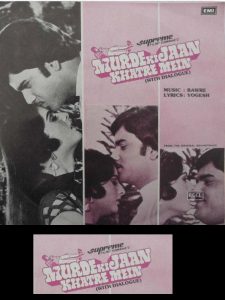 6. Ghar Mein Ram Gali Mein Shyam (1988)
Amar marries a rural girl and moves to the city, where she meets Mr. and Mrs. Dharamchand, her next-door neighbours. Soon after, Amar begins to mistrust her loyalty, and Dharamchand devises a plan to keep them apart. 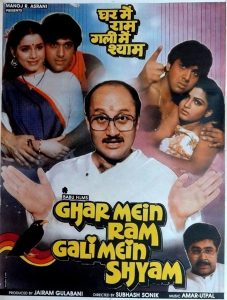 7. Main Nashe Mein Hoon (1959)
An alcoholic falls in love with a woman who uses him to extort money from his father, a judge, in order to exact revenge on him. Only a house servant, an ex-convict, is concerned about his well-being. 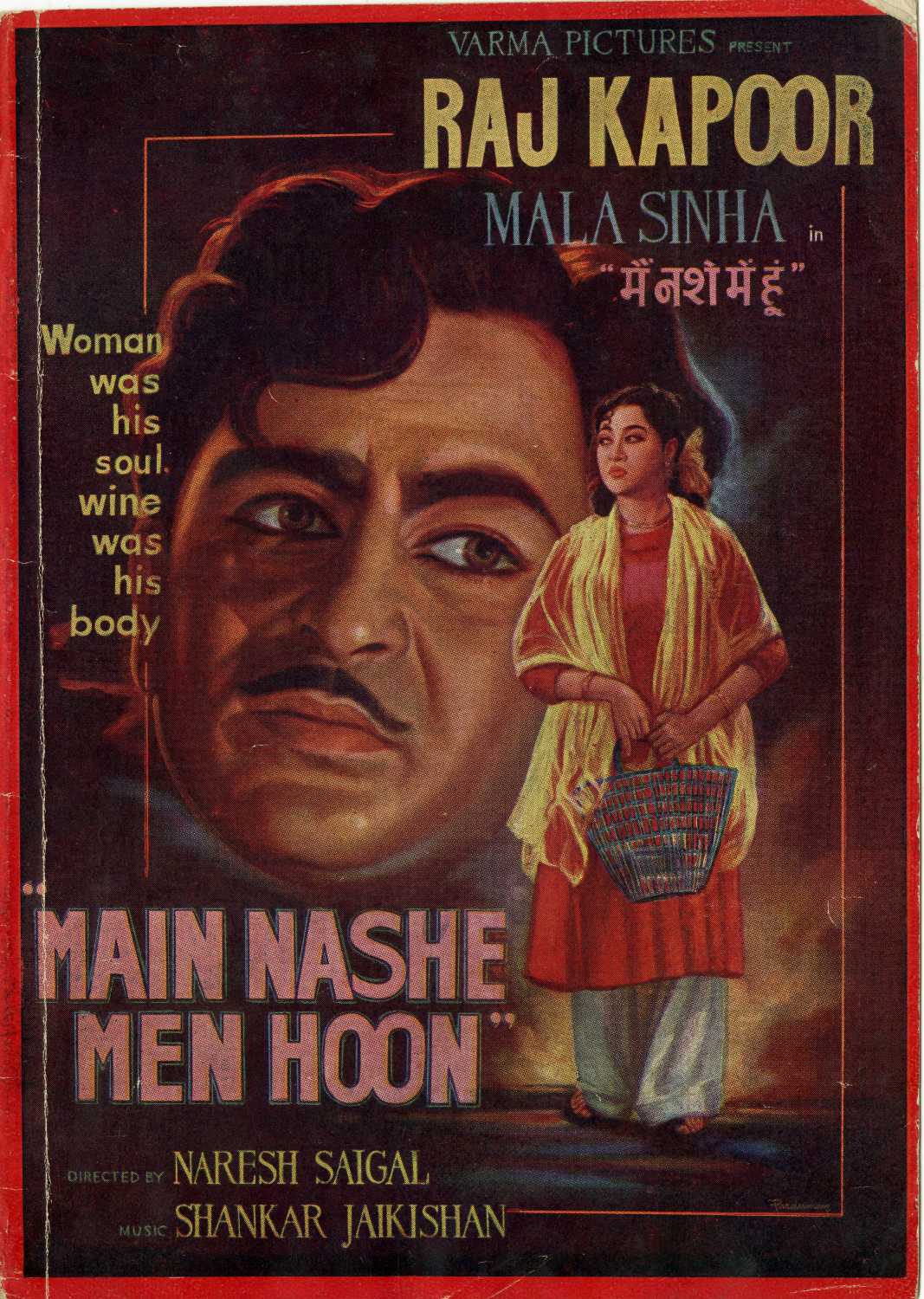 8. Raja Rani Ko Chahiye Pasina (1978)
A childless couple, a king and queen, are advised a herb that must be mixed with human sweat which is produced by hard work. In search of said sweat, the king and queen realise that their kingdom is full of lazy and corrupt people. 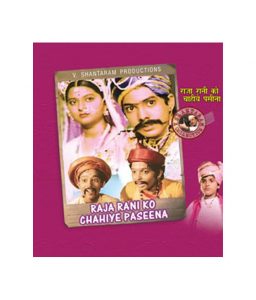 9. Thodasa Roomani Ho Jaye (1990)
An alcoholic falls in love with a woman who uses him to extort money from his father, a judge, in order to exact revenge on him. Only a house servant, an ex-convict, is concerned about his well-being. 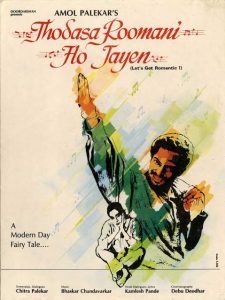 10. Bhatakti Jawaani (1988)
Bhatakti Jawani is a Romantic Thriller Adult Drama Film centred on the plot of a Love Triangle and the carnal desires of individuals pushing them to take inappropriate choices in the face of life-threatening threats. 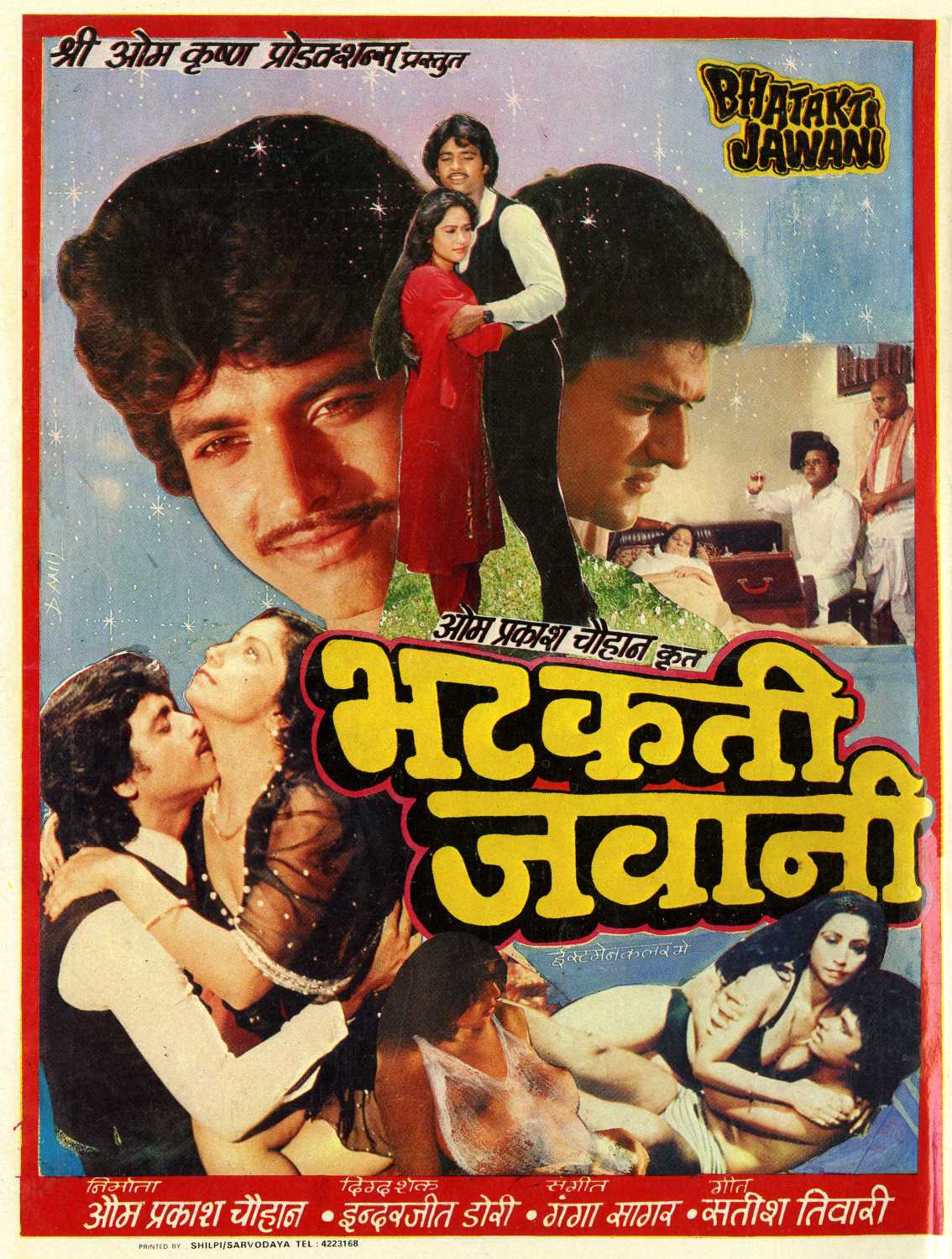 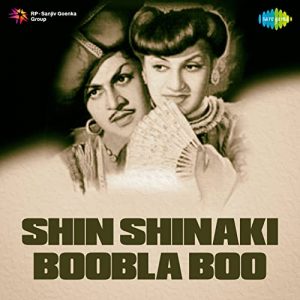 12. Mehandi Ban Gai Khoon (1991)
Jyoti gives up her love for Prakash, an orphan, and marries Vijay instead. However, she is subjected to torture and is ejected from her in-laws’ home. Vijay and his family are then taught a lesson by her. This is one of the wildest and most difficult old Hindi movie names for dumb charades! 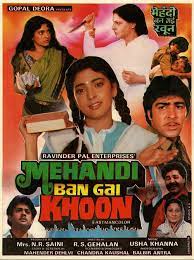 13. Dilruba Tangewali (1987)
Dilruba and Reshma, twin girls, used to live a happy and comfortable life with their parents. Then catastrophe hits when their parents are brutally murdered by Dacoit Bhawani Singh. Dilruba becomes a tangewali, while her sister Reshma joins Bhawani Singh’s gang as an informant, as fate separates the twin sisters. Unbeknownst to them, the sisters have become bitter rivals. When the sisters fall in love with the same man, D.S.P Vijay Singh, things become even more complicated. 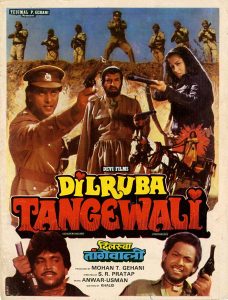 14. Bandook Dahej Ke Seene Par (1986)
The story follows daughters-in-law who are abandoned by their husbands and mothers-in-law in exchange for a dowry. To address this social issue, a bunch of armed bandits form a group. 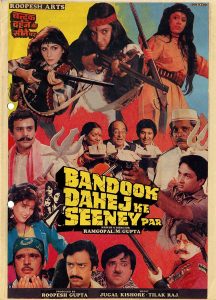 15. Dhoti Lota Aur Chowpatty (1975)
A street food vendor and several other residents and workers in Juhu, Mumbai, engage in a number of amusing and amorous activities. 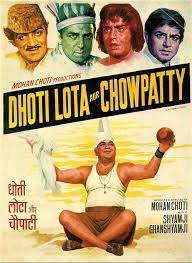 16. Jal Bin Machhli Nritya Bin Bijli (1971)
Alaknanda, a wealthy young lady, flees her father’s home and joins an entertainment group to follow her passion for singing and dancing. She is soon involved in an accident and has her limbs severed. 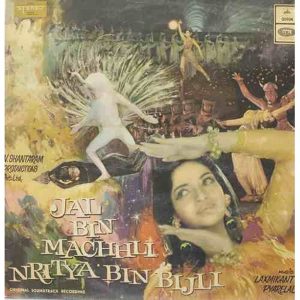 17. Badhti Ka Naam Dadhi (1974)
The story revolves around a multimillionaire with no successor who intends to leave his fortune to the person with the largest beard. Following that, utter mayhem ensues as Kishore Kumar and K. N. Singh plot to outwit each other. 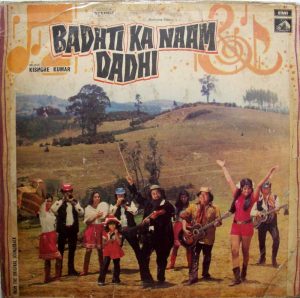 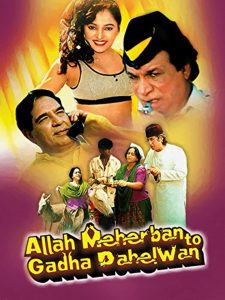 19. Do Ladke Dono Kadke (1979)
Two minor criminals decide to rob a home where kidnappers are planning to kidnap a child. However, the infant is abducted by the thieves, resulting in turmoil as both criminal parties seek a ransom. 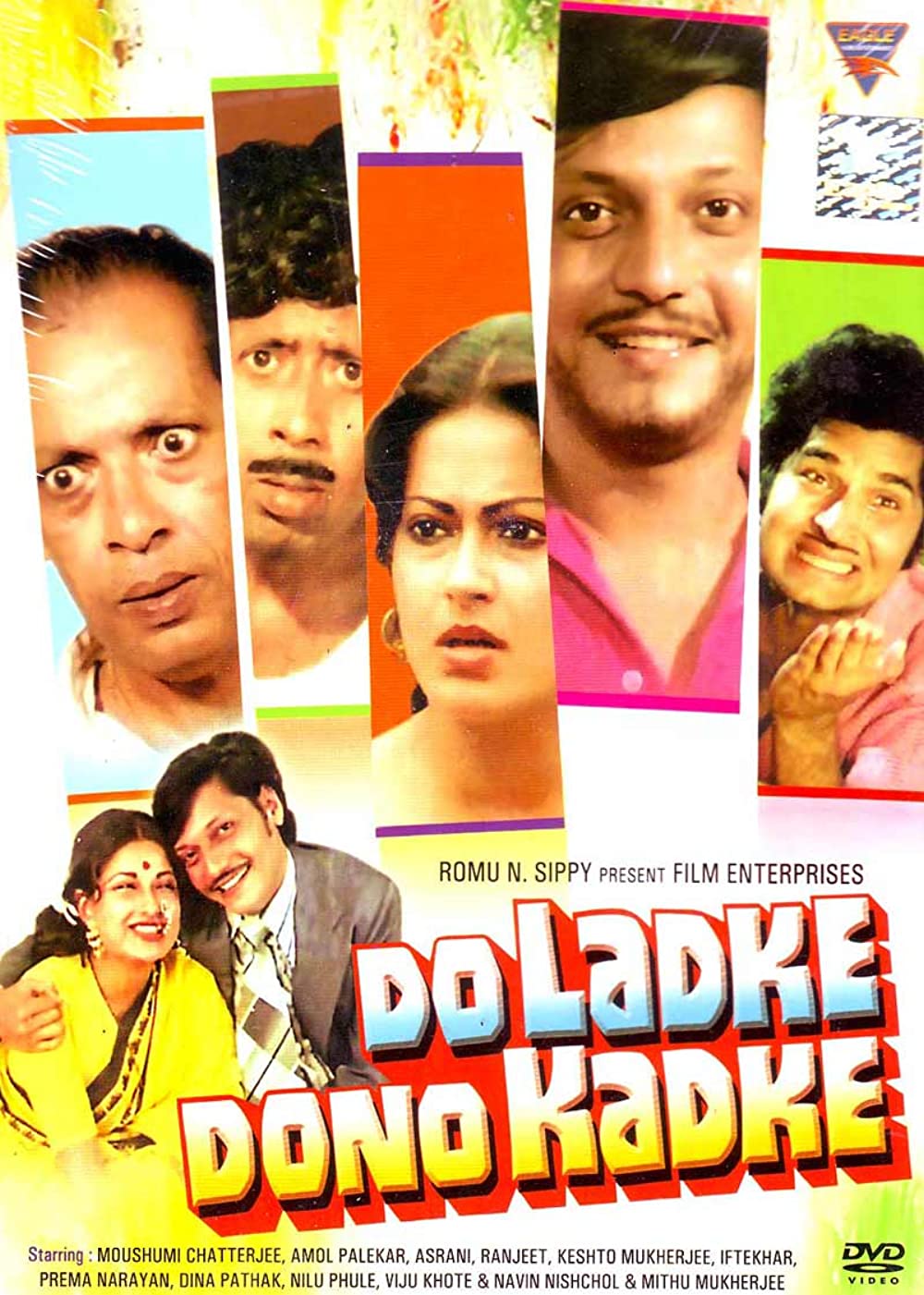 20. Udhaar Ka Sindur (1976)
Rajkumar, Dr Shivnath’s adopted son, borrows money from a number of moneylenders throughout his life. When his father is unable to settle his debts, however, he plans to marry a wealthy woman. 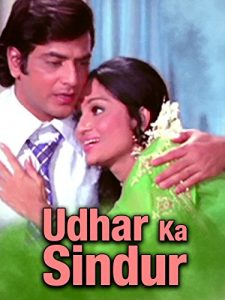 21. Bhediyon Ka Samooh (1991)
His father teaches his son to take bribes in order to live a better life. He, on the other hand, makes enemies with the wrong people, who kidnap his sweetheart for ransom. 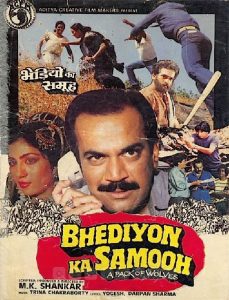 22. Maa Kasam Badla Loonga (1990)
Inspector Ajay Shastry, an upright police officer, seeks vengeance on the evil individuals who raped his young sister. This is one of the best old Hindi movie names for dumb charades. 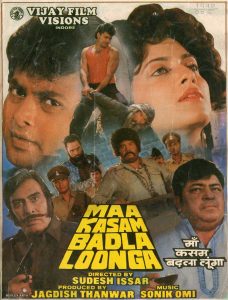 23. Sone Ka Dil Lohe Ka Haath (1978)
Shankar is a straightforward, straightforward man who works for a caring boss named Balkishan. Shankar is married to Parvati and has a young boy named Bunty. Shankar goes to meet Balkishan in the hopes of borrowing some money to help him advance his career, but instead finds him dead. Shankar is apprehended by the police for shooting and killing Balkishan. Shankar’s pleadings are ignored, and he is sentenced to 14 years in prison. Shankar is released after seven years due to his excellent behaviour, but on his way back he encounters the real killer of Balkishan, Dinanath Mathur, and a confrontation follows, with Shankar shooting Dinanath to death. 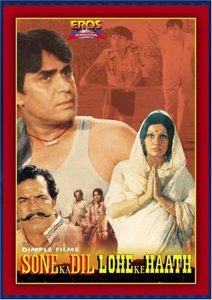 24. Tel Malish Boot Polish (1961)
An affluent girl falls in love with a scheduled-caste man who believes in the dignity of hard work and labour. The girl’s father forbids her from leaving the house because he wants her to marry a foreigner. 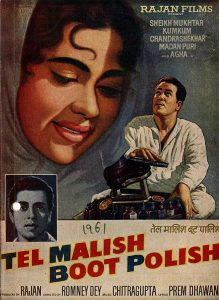 25. Kasam Paida Karne Wale Ki (1984)
His paternal uncle murders Aarti’s spouse in order to seize his fortune and inheritance. She swears to revenge for his death through her unborn child. 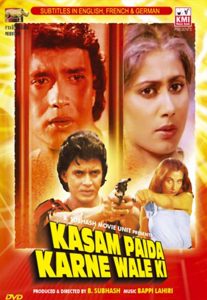 This was our list of the most bizarre and difficult old Hindi movie names for dumb charades. Did you win? Let us know in the comments!