15 Places to Visit in Mumbai

If you’re planning a trip to Mumbai, make sure to check out our list of the best places to visit in Mumbai so you don’t miss out. There is something truly unique about Mumbai. The city truly reflects the diversity that India is known for, housing India’s most prolific film industry, some of Asia’s largest slums as well as the world’s most expensive homes, as well as the world’s largest tropical forest in an urban area. Not only that, but the city can fill pages and pages with rich history, and it can compete with any city in the country when it comes to nightlife. The bottom line is that Mumbai is a must-see destination in India, one that will linger in your mind for days after your tour.

Read Also: 20 Weekend Getaways From Mumbai That Are Too Beautiful To Miss!

First on our list of places to visit in Mumbai is The Gateway of India. It stands proudly on the banks of the Arabian Sea in the Apollo Bunder waterfront area, is one of Mumbai’s most popular and treasured landmarks. The 26-meter basalt archway was built as a welcome gesture for King George V and Queen Mary when they visited British India in 1911. It combines the architectural styles of Roman triumphal arches with traditional Hindu and Muslim designs. Ironically, the last British troops left India under this archway in 1948, after the country declared independence from the United Kingdom.

The Gateway of India is now one of Mumbai’s most popular gathering spots for both tourists and locals. From the five jetties that flank the arch, you can watch yachts and ferries set sail. Street food vendors sell the famous bhelpuri (a crunchy, savory snack made of puffed rice and doused in tamarind sauce). Alternatively, you can simply spend an hour or two people-watching at this bustling attraction. 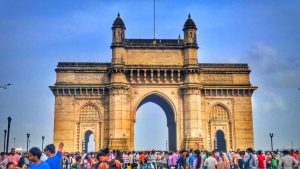 Elephanta Caves are located on Elephanta Island, a 40-minute ferry ride from the Gateway of India. Elephanta Caves, which date back to 600 AD, have been designated as a UNESCO World Heritage Site. The Portuguese, who used them in their sword practice, damaged the stone sculptures of Hindu and Buddhist gods. Regardless, the sculptures’ artwork speaks to the artistic excellence of a bygone era, and it’s no surprise that Elephanta Caves is considered one of India’s seven wonders. 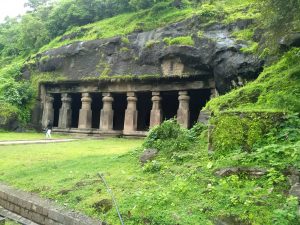 The Bandra-Worli Sea Link, a cable-stayed bridge, is one of the most iconic places to visit in Mumbai. The eight-lane bridge, which opened in 2009, connects the central business district with the western suburbs across the open sea, providing much-needed relief from the Mahim Causeway’s congestion. It has become Mumbai’s equivalent of the Brooklyn Bridge or the Opera House in New York.

Head to the Bandra Fort, a historic watchtower built by the Portuguese in 1640, for the best views of the Bandra-Worli Sea Link. It’s also worthwhile to drive across the bridge. The crashing sea can be seen on both sides of the bridge during the day. Watch the bridge light up with spectacular colors at night. 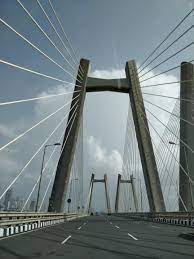 Juhu Beach, in Vile Parle, is probably one of Mumbai’s most popular tourist destinations. Juhu Beach comes alive in the evenings, when people from all walks of life come to watch the sunset, play in the water, and indulge in street food such as Bhel Puri and Pav Bhaji. It’s the ideal spot for spending quality time with family and friends. On a Mumbai trip, the chill and grill vibes of Juhu beach will be the best things to feel. 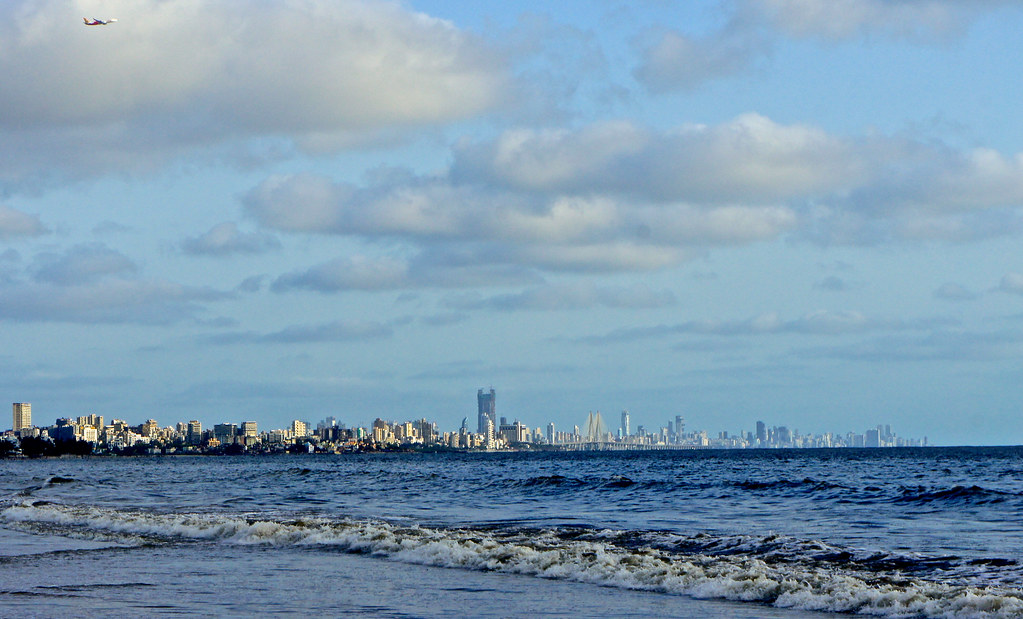 Haji Ali Shrine, in the heart of Worli, is a beautiful example of Indian Muslim architecture. The 85-foot-tall structure stands on 4500 square meters of land. The marble used in the construction of the Shrine matches the marble used in the Taj Mahal. The Shrine’s pillars are beautiful, and the monument’s mirror work is stunning. The Haji Ali Shrine’s magnificent architecture draws visitors of all faiths and beliefs. 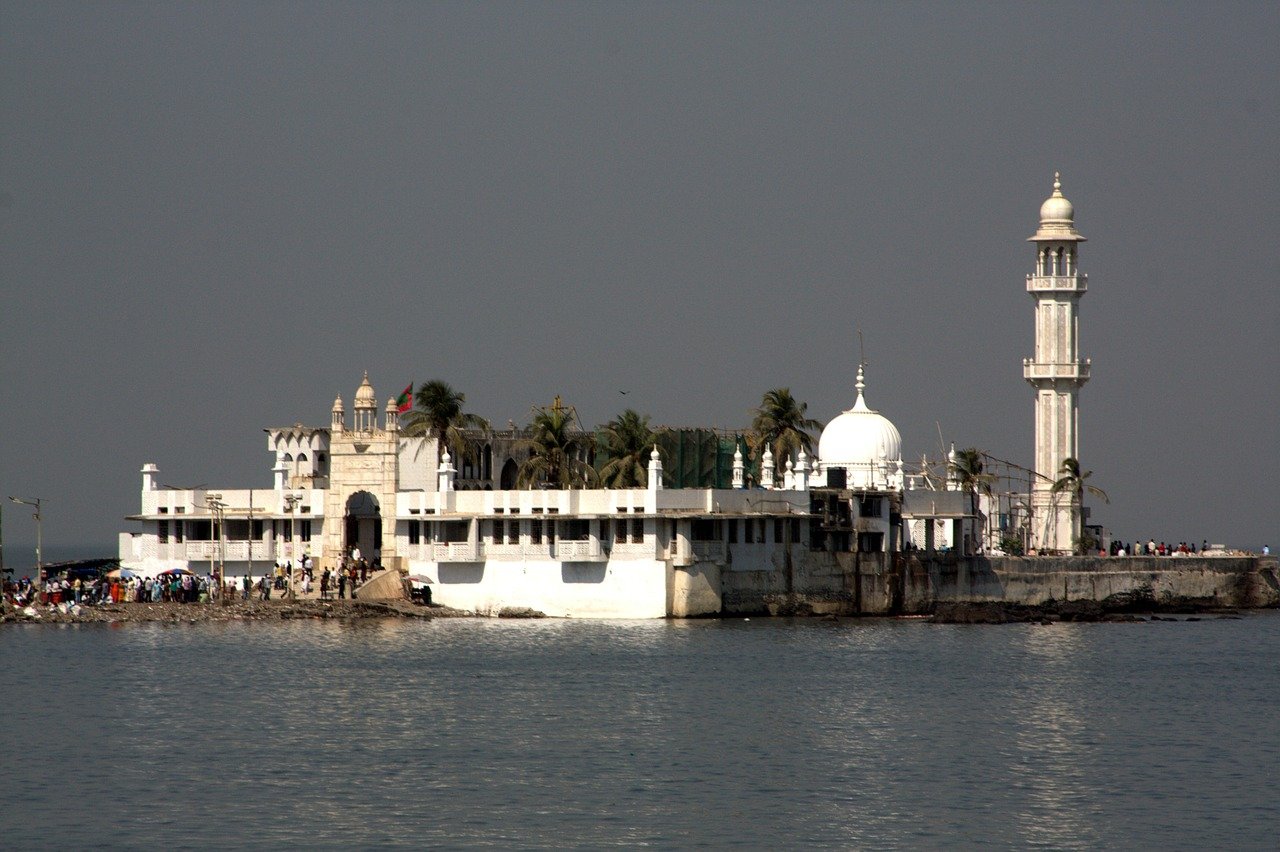 Next, on our list of places to visit in Mumbai is the Chhatrapati Shivaji Terminus. Victoria Terminus was the previous name for this location. In the year 1897, the building was completed. In 2004, UNESCO designated the terminus as a World Heritage Site. The structure is a mix of different cultures’ architecture, including traditional Indian, Victorian, and Gothic styles. Despite the fact that it is a train station, you can’t help but admire the building’s stunning architecture. Whether you plan on taking the train or not, this is a must-see attraction in Mumbai. 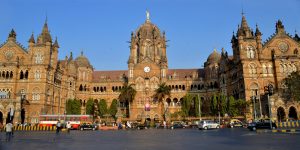 Many Hindus have favorites among the 33 million gods who make up the religion. The Shree Siddhivinayak Temple is visited by devotees of Ganesha (the potbellied deity with the elephant head who is known as the “remover of obstacles”). Slip off your shoes and enter to see the deity’s idol, which is draped in marigold garlands and offerings, along with hundreds of other visitors (and perhaps a granted wish). It’s a once-in-a-lifetime cultural experience. 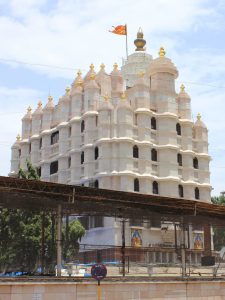 Locals refer to this tourist attraction as Sonapur, despite the fact that it is known as Marine Drive. Marine Drive, which runs from Nariman Point to Babulnath and is located at the foot of Malabar Hill, is a 3-kilometer stretch. Thousands of people flock to this location to walk along the walkway and watch the sunset at dusk. Marine Drive is also known as the ‘Queen’s Necklace,’ because the street lights resemble a string of pearls and create the illusion of a necklace when viewed from a high vantage point at night. Chowpatty Beach, near the northern end of Marine Drive, is one of Mumbai’s oldest beaches, known for its bazaars and fast food and snacks like Bhel Puri and Pav Bhaji. 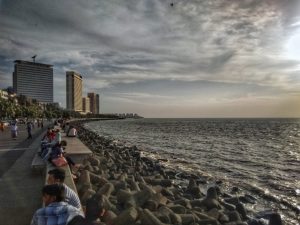 Madh Island is one of the most beautiful places to visit in Mumbai. It is home to a plethora of villages, farmlands, and surreal vistas. Madh Island, a respite from the glitterati and dazzling environs of the city, is clustered with quaint fisher villages and dotted with lush green farms and can be reached by an hour’s drive from the main city. 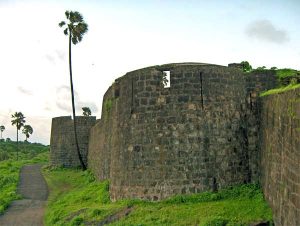 This group of 19 hillside caves should be on your must-see list if you want to travel back in time and explore something truly unique. These ancient caves, carved out of black solid basalt between the 1st and 6th centuries CE, once housed Buddhist monks. They’re also known as Kondivite Caves, and they have Buddhist Stupa and Pali scriptures on many of their walls. 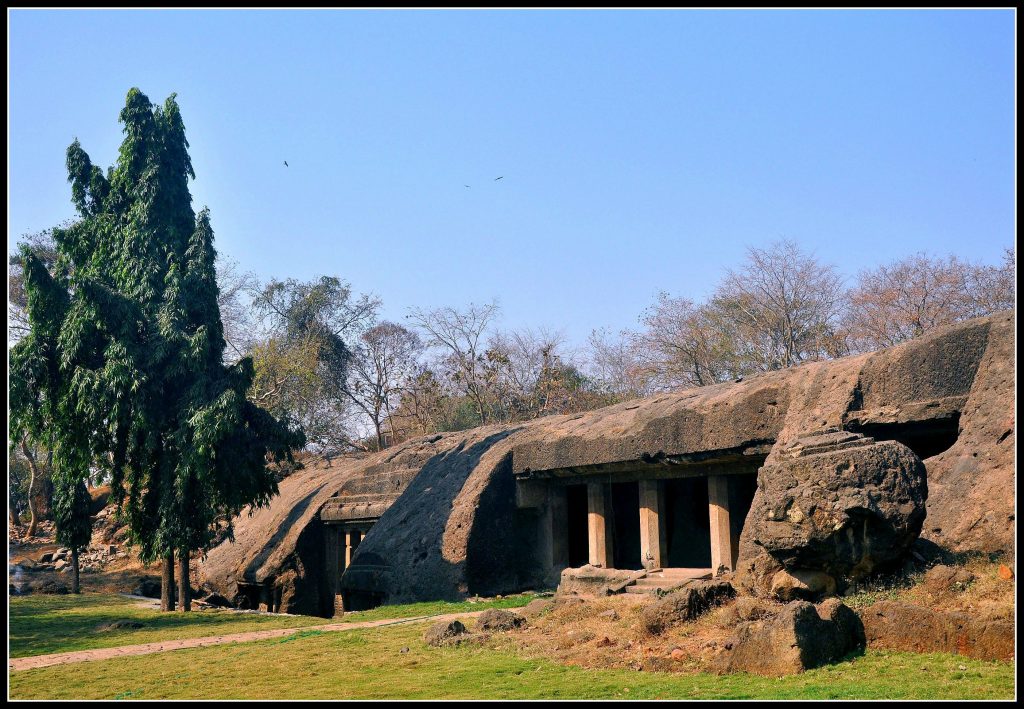 The Kanheri Caves, also known as the ‘lungs of Mumbai,’ are located in the Sanjay Gandhi National Park in Borivali and are one of the best places to visit in Mumbai during your visit to the city. It is said to be the only location in the city with the most greenery and, as a result, the freshest air.

The Kanheri Caves grounds provide a pleasant respite from the city’s pollution and bustle. The caves are believed to be one of India’s oldest caves, dating back to the 1st century BC. Natural Basalt formations, ancient Indian-styled architecture, and 109 unique cave entrances make Kanheri Caves a must-see. These caves were once a unique Buddhist congregational worship, study, and meditation center. 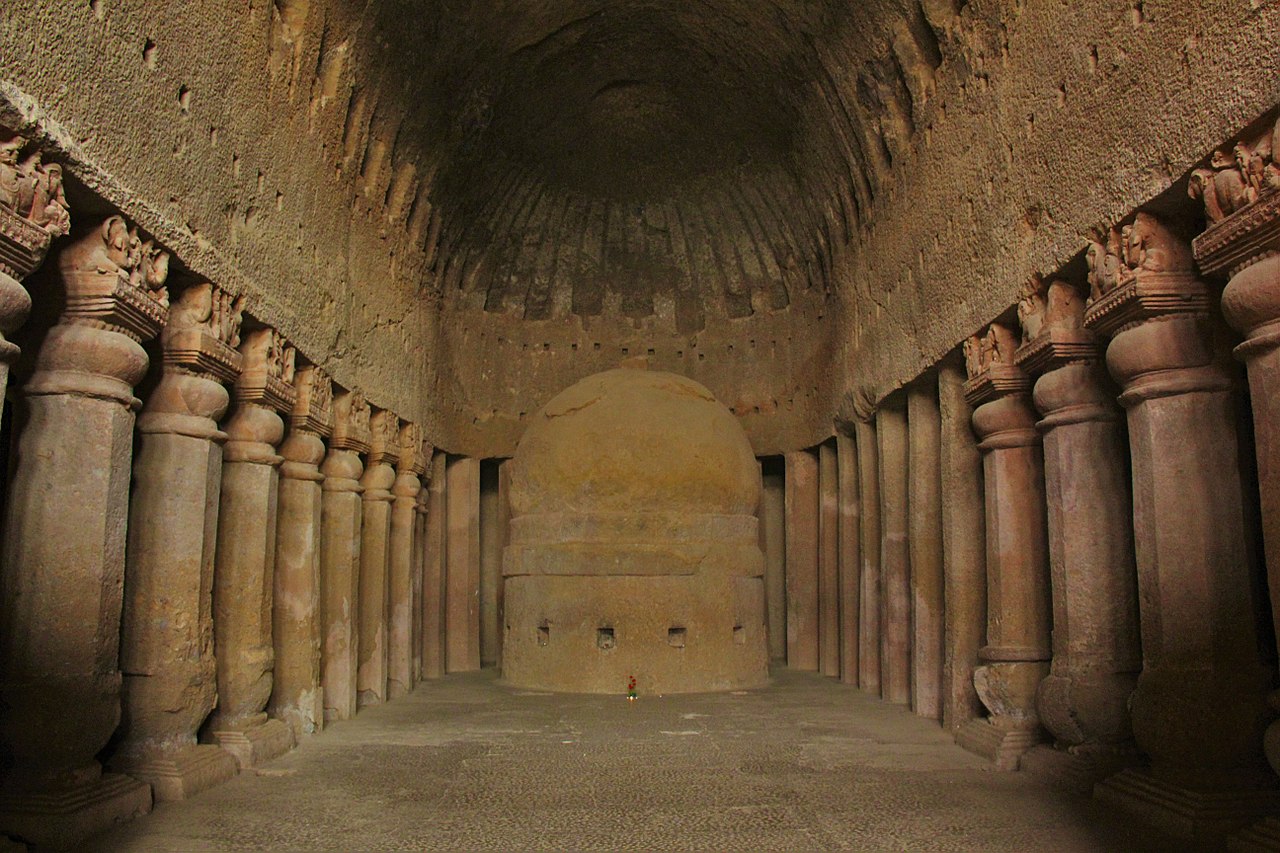 If you’re looking for unique places to visit in Mumbai, look no further! It’s impossible to go wrong with spending a few hours at the Bandra Bandstand promenade. It is one of the must-see promenades in Mumbai, and it is a sight to behold.

This social and iconic location attracts a large number of joggers, walkers, children, and cyclists. Furthermore, you will have the opportunity to see a few Bollywood stars who live in the area while strolling here. In addition, this location is home to a number of well-known restaurants, all of which have a lively atmosphere. The majority of the cafes and lounges here serve contemporary cuisine, in keeping with Bandra’s trendiness. As a result, visitors can end their visit to this location with a delicious meal at one of the upscale restaurants. 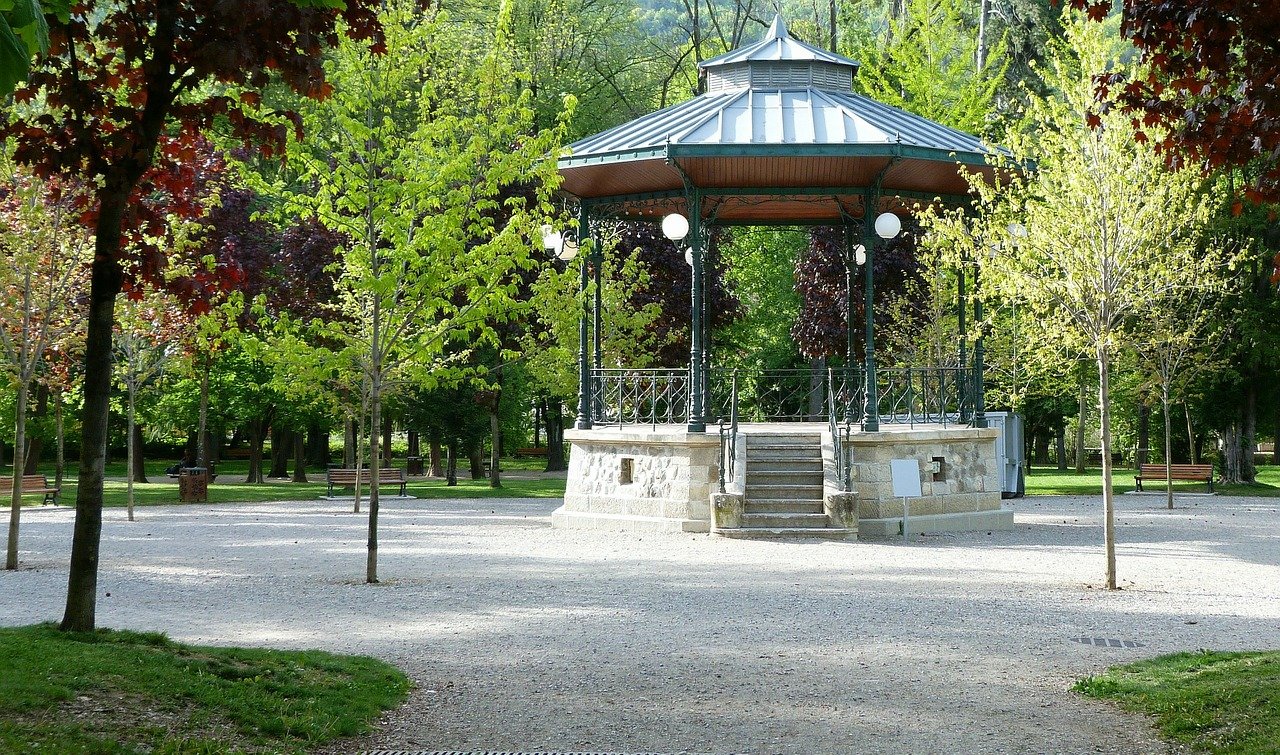 The Hanging Garden is South Mumbai’s crown jewel. Due to the lack of space for solace in Mumbai, it is difficult to imagine any green space, but there are a few parks and gardens that will take your breath away.

Picnics, evening walks, and morning walks are all popular activities at Hanging Garden. This garden, located on the western side of Malabar Hill, is a popular spot for photographers and those seeking peace. Pherozeshah Mehta Garden, also known as Hanging Garden, was built in 1881. This wonderful Hanging Garden is one of the best places to visit for tourists in Mumbai, with stunning views of the Arabian Sea, cool sunset views, swings for kids, and lush greenery for nature lovers. 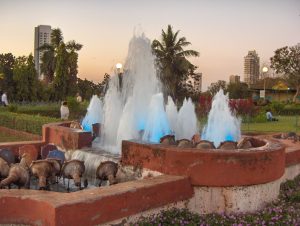 Chowpatty Beach is one of the most popular places to visit in Mumbai. Mumbai, as we all know, is constantly busy, never sleeps, and is always active. People become exhausted as a result of life’s chaos.

Chowpatty Beach provides moments of joy and rejuvenation for both mind and body from the daily grind. People come here to do Yoga Asanas and walk in the mornings, which are very peaceful. The Arabian Sea’s scenic beauty will soothe your eyes. Your day will be made by food stalls and shops. If you’re looking for a place to unwind, Chowpatty Beach is the place to go. 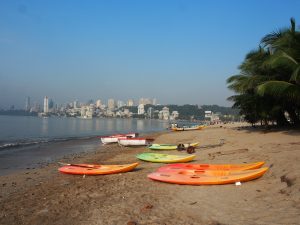 If you’re in Mumbai, you must pay a visit to Mumba Devi Temple. It is one of the most beautiful temples in Mumbai, and it is located in the heart of the city. The temple was built in the eighteenth century. Goddess Mumba Devi is the patron goddess of Mumbai and the guardian goddess of Koli fishermen.

Mumbai is also said to have gotten its name from Goddess Mumba Devi. Mumba Devi, according to legend, is an eight-armed goddess who defeated the evil demon Mumbaraka. Mumbaraka requested that the goddess take his name and gave him permission to build a temple in her honor after his defeat. Mumbaraka constructed the Shrine in Mumba Devi’s temple. 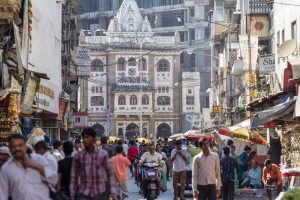 So, here were all the iconic places to visit in Mumbai. Make sure to let us know down in the comments below which one was your favorite and let us know your experience.