The Bhagavad Gita, literally “Song of the Lord,” is part of the ancient Hindu epic Mahabharat and one of its eighteen principal Upanishads. Traditionally Bhagavad Gita is supposed to be a discourse that takes place between Krishna and Arjuna as an illustration of the Vedic idea. Few people who were exposed to the wisdom of the Bhagavad Gita explicitly tried to understand it so here we have compiled some Shlokas and quotes from Bhagavad Gita in Sanskrit :

Also check: 17 Enlightening Quotes From Vedas In Hindi You Must Read 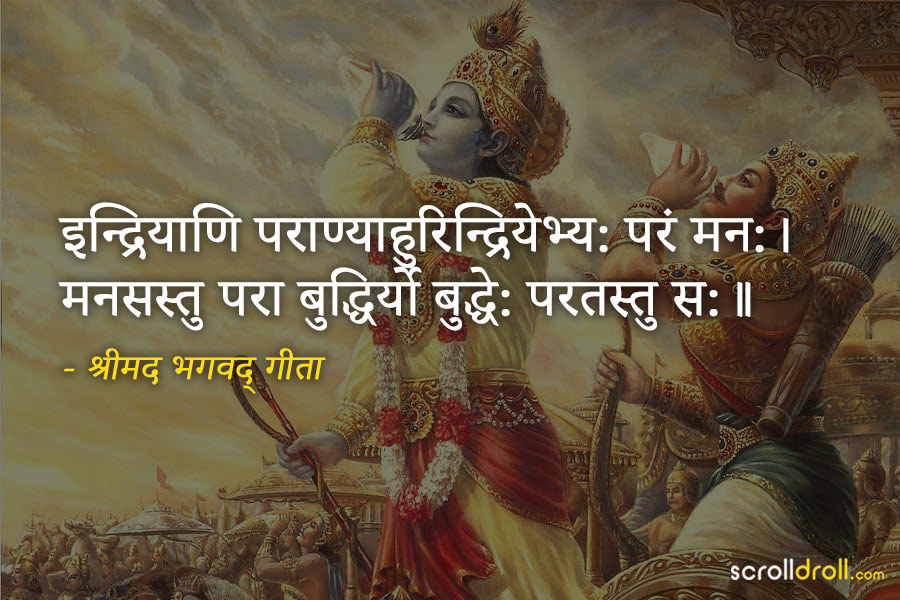 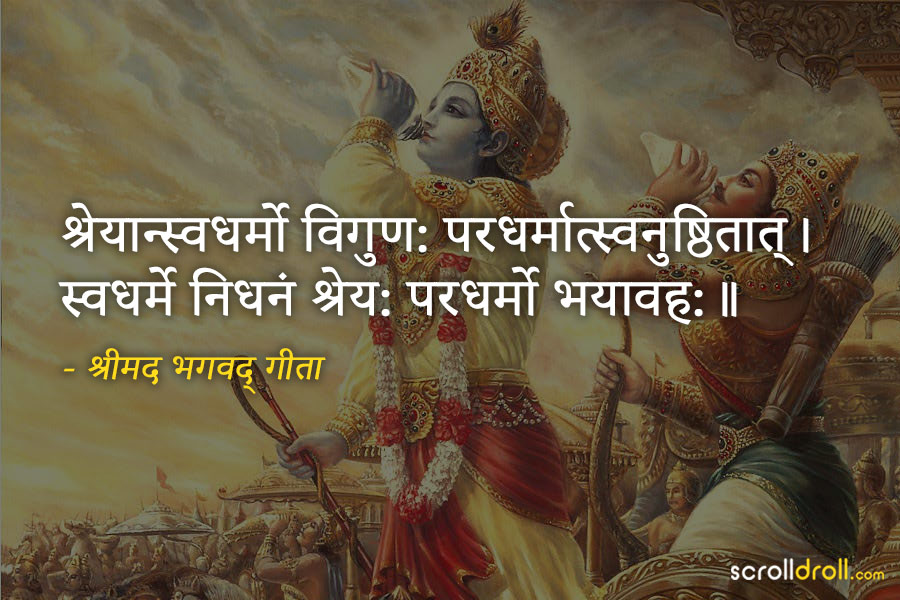 3. Just as the ocean remains undisturbed by the incessant flow of waters from rivers merging into it, likewise the sage who is unmoved despite the flow of desirable objects all around him attains peace, and not the person who strives to satisfy desires. 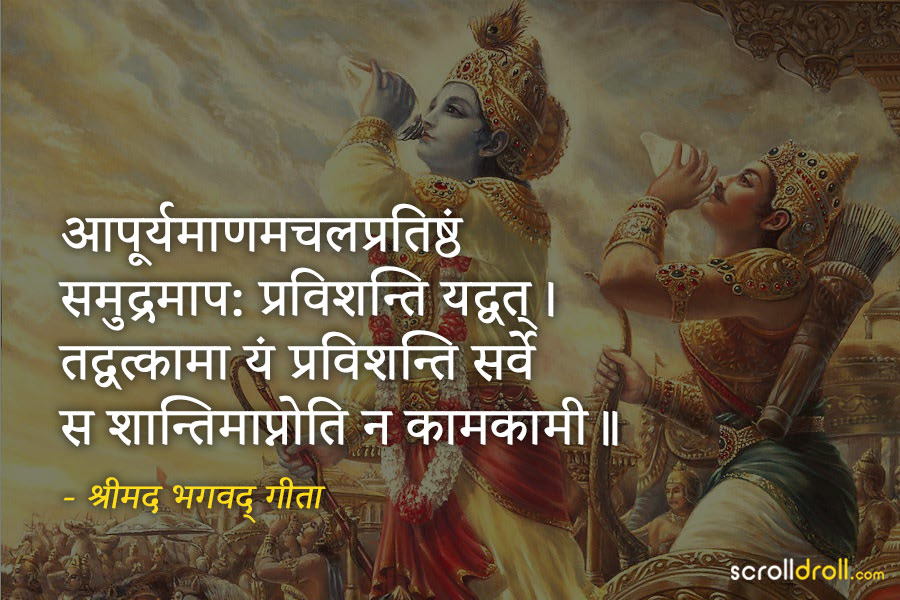 4. As a person sheds worn-out garments and wears new ones, likewise, at the time of death, the soul casts off its worn-out body and enters a new one. 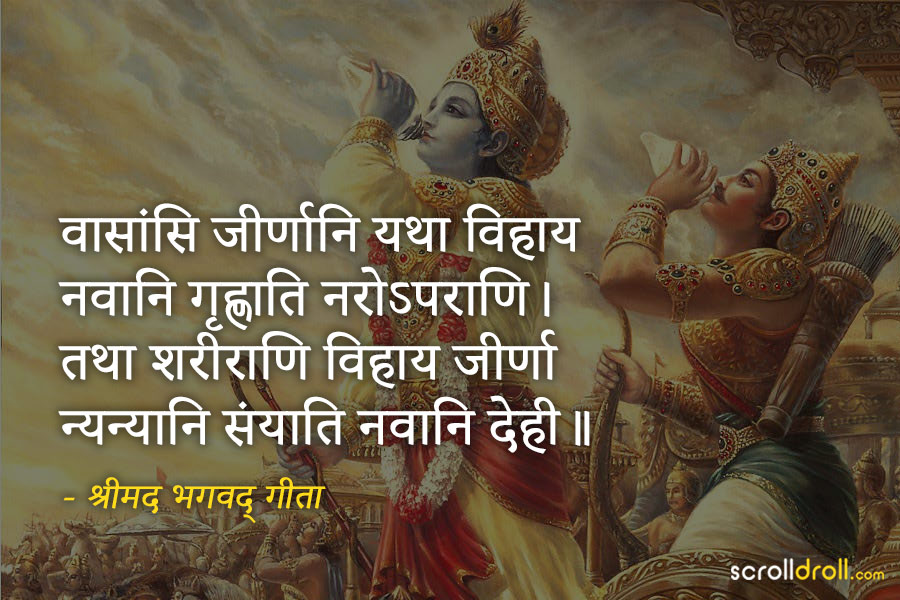 5. Never was there a time when I did not exist, nor you, nor all these kings; nor in the future shall any of us cease to be. 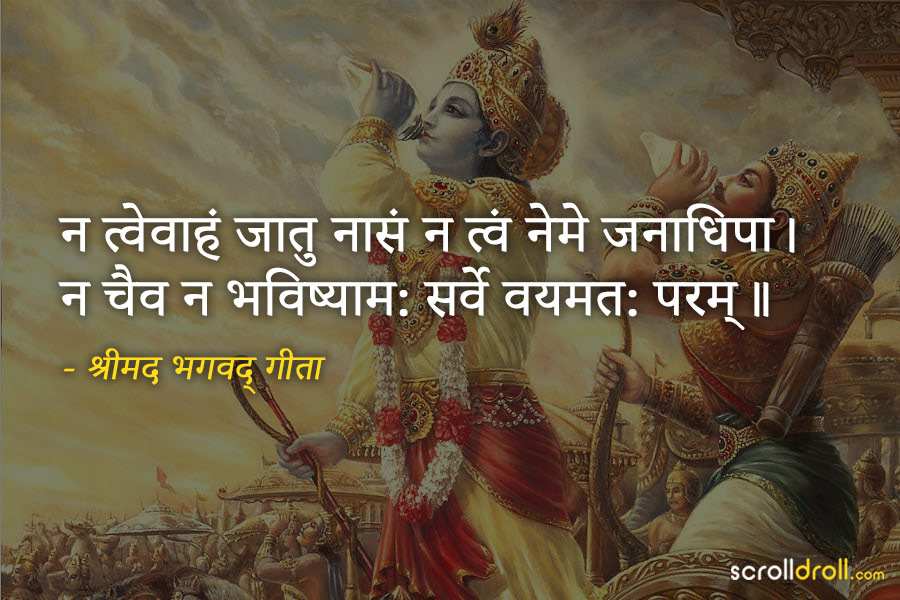 6. O son of Kunti, the contact between the senses and the sense objects gives rise to fleeting perceptions of happiness and distress. These are non-permanent, and come and go like the winter and summer seasons. O descendent of Bharat, one must learn to tolerate them without being disturbed. 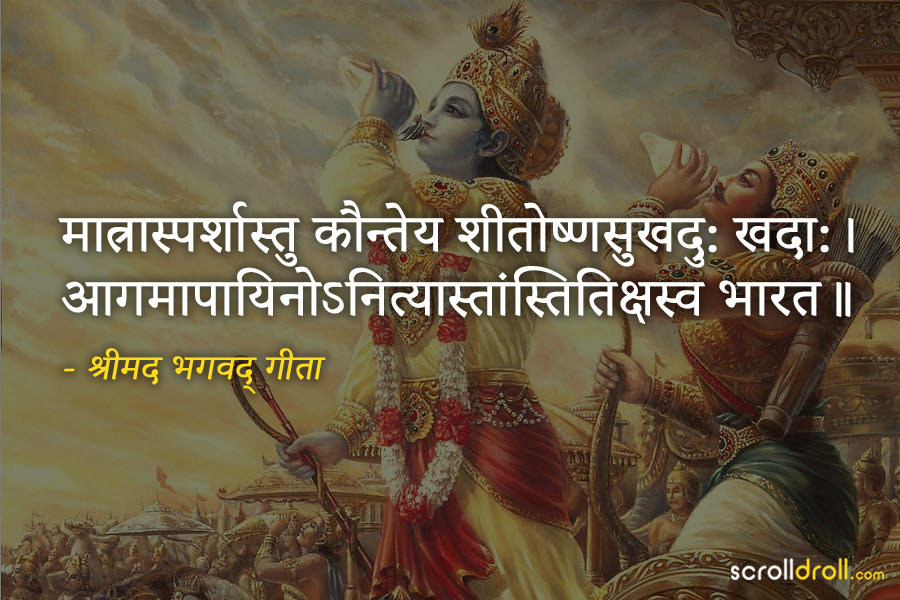 7. There are three gates leading to the hell of self-destruction for the soul—lust, anger, and greed. Therefore, one should abandon all three. 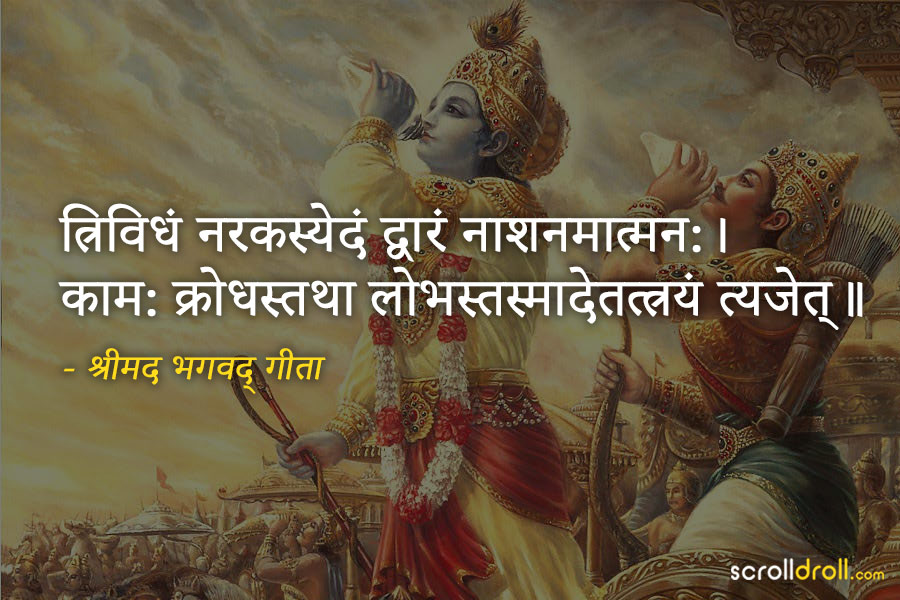 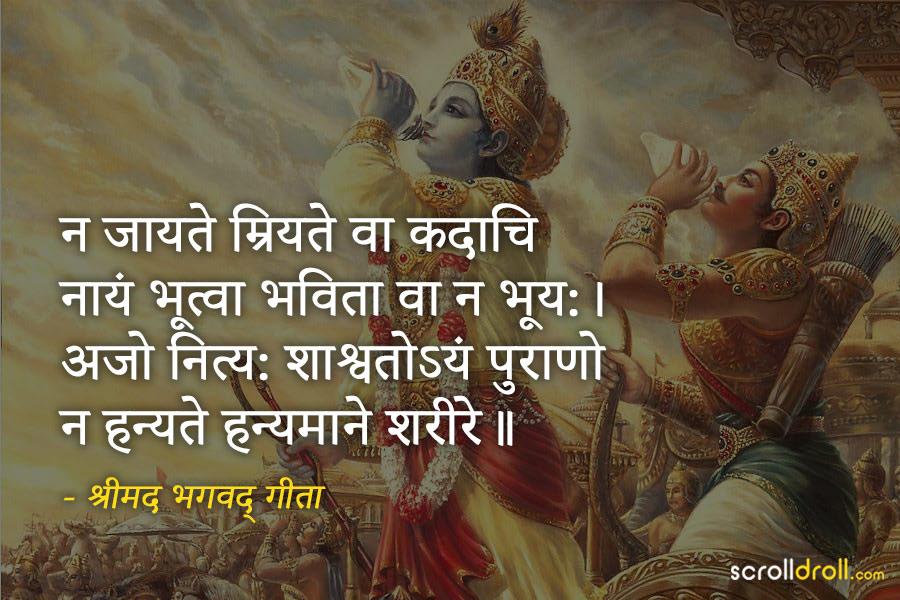 9. Fight for the sake of duty, treating alike happiness and distress, loss and gain, victory and defeat. Fulfilling your responsibility in this way, you will never incur sin. 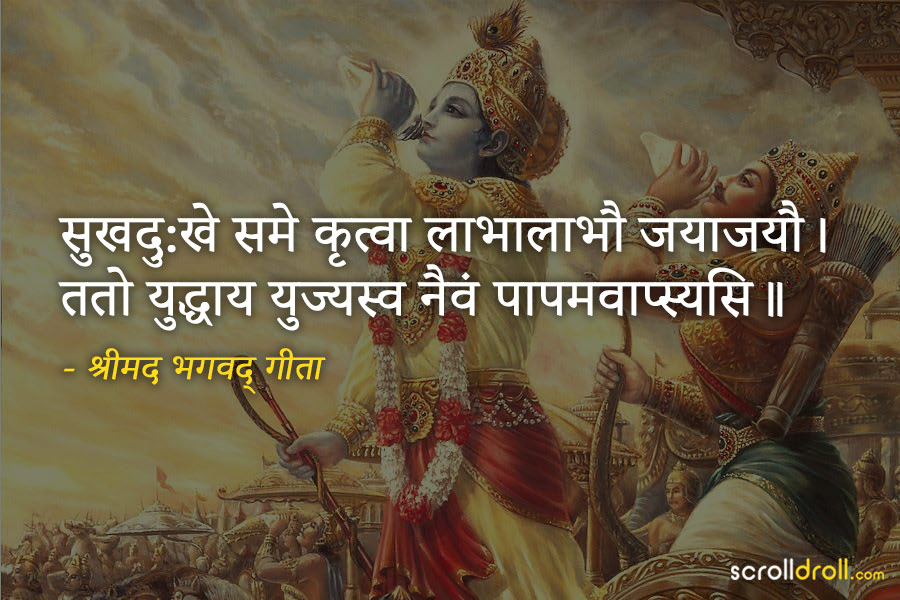 10. Elevate yourself through the power of your mind, and not degrade yourself, for the mind can be the friend and also the enemy of the self. 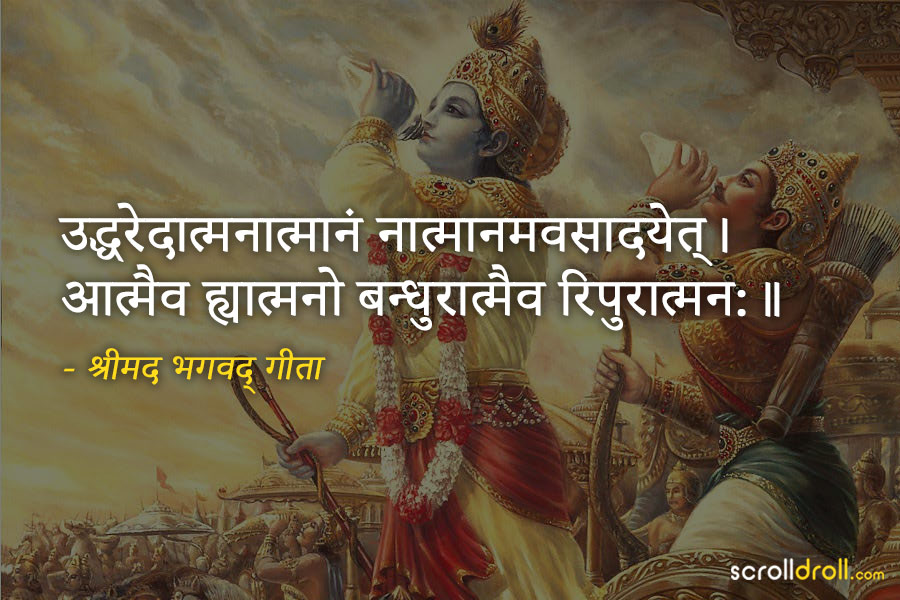 11. Anger leads to clouding of judgment, which results in the bewilderment of memory. When memory is bewildered, the intellect gets destroyed; and when the intellect is destroyed, one is ruined. 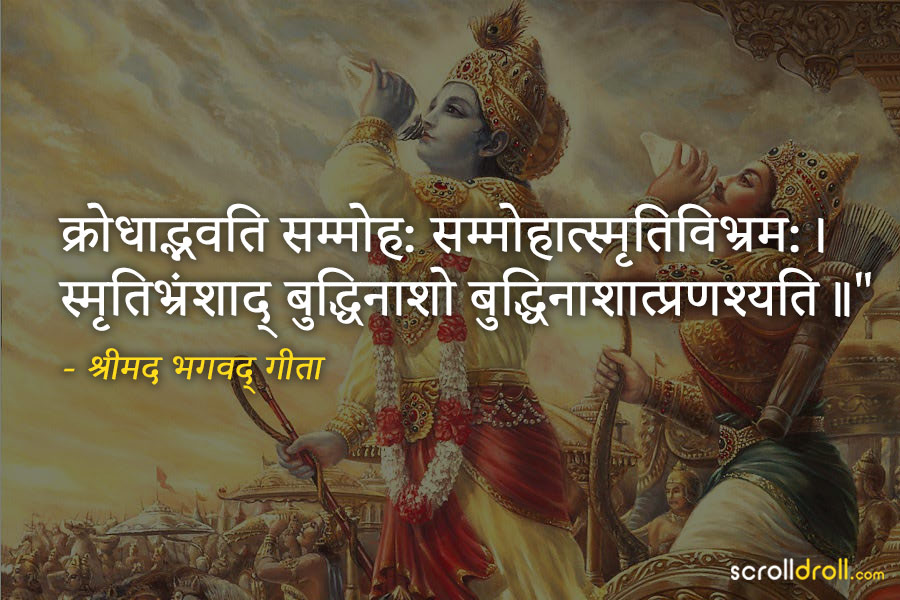 12. You have a right to perform your prescribed duties, but you are not entitled to the fruits of your actions. Never consider yourself to be the cause of the results of your activities, nor be attached to inaction. 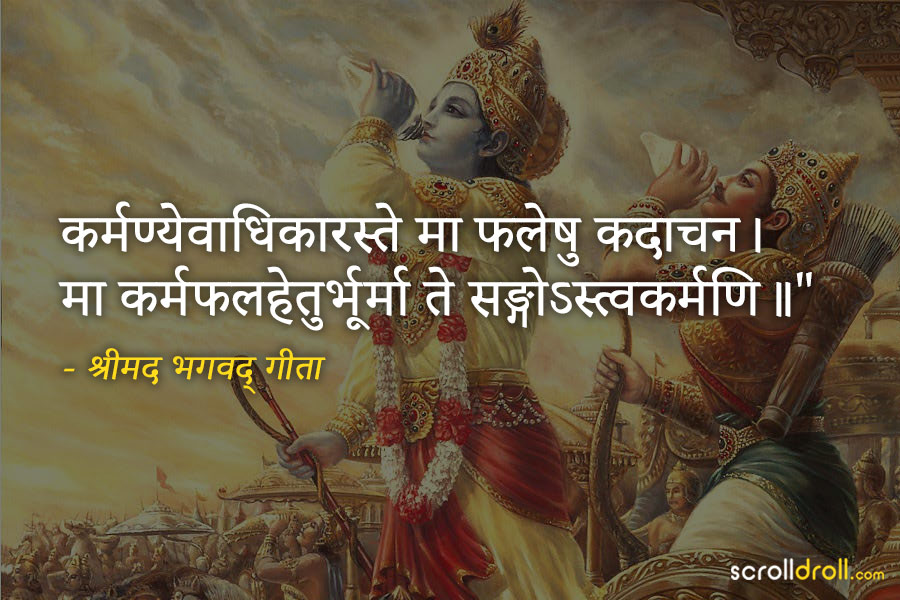 Bhagavad Gita is one of the most philosophical and spiritual books and contain many wise sayings which are still accepted in today’s high-paced life. These quotes from Bhagavad Gita in Sanskrit are a must-read for everyone.