Undoubtedly the best and most beautifully written novel by John Green, The Fault In Our Stars, is a treasure box of soul-stirring quotes. The novel not only redefines the idea of life and death but also celebrates a heartwarming love story. The characters of Hazel Grace Lancaster and Augustus Waters have created a space for themselves in our hearts ever since the book was first released in 2012. Let’s have a look at the best quotes from The Fault In Our Stars, okay? Okay. 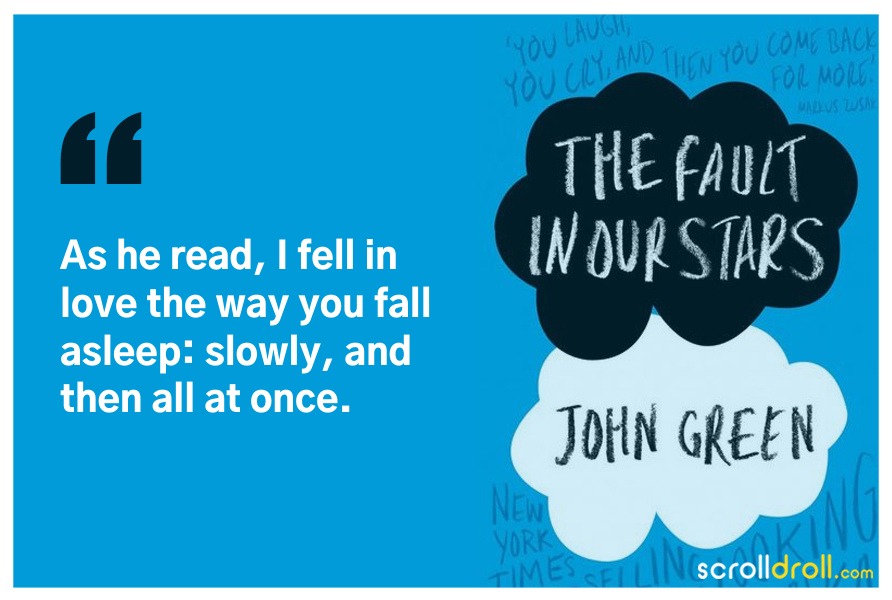 2. “My thoughts are stars I cannot fathom into constellations.” 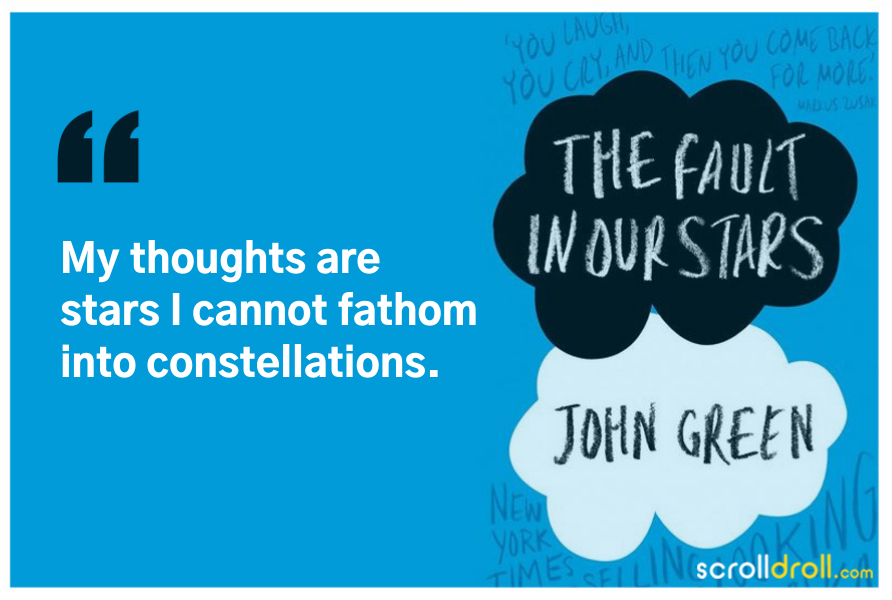 3. “The marks humans leave are too often scars.” 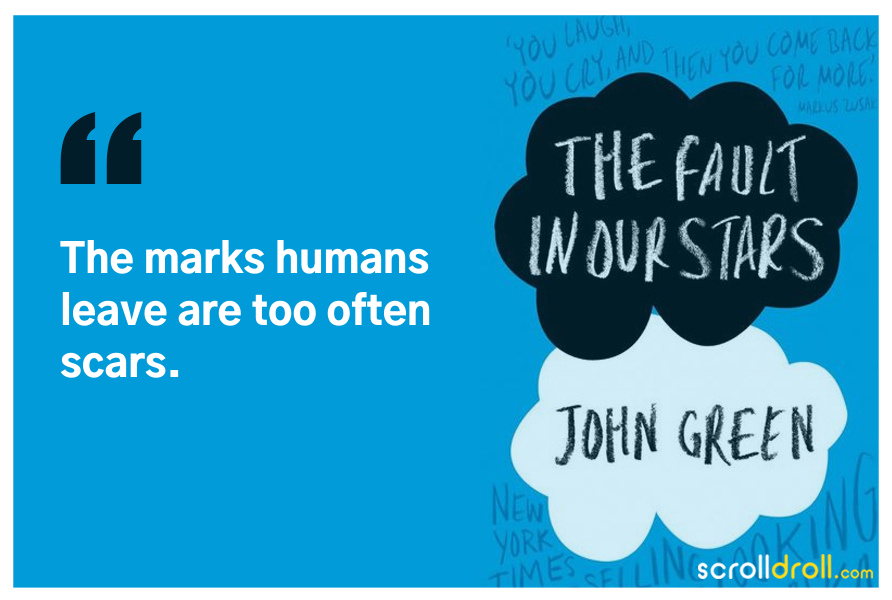 4. “Some infinities are bigger than other infinities.” 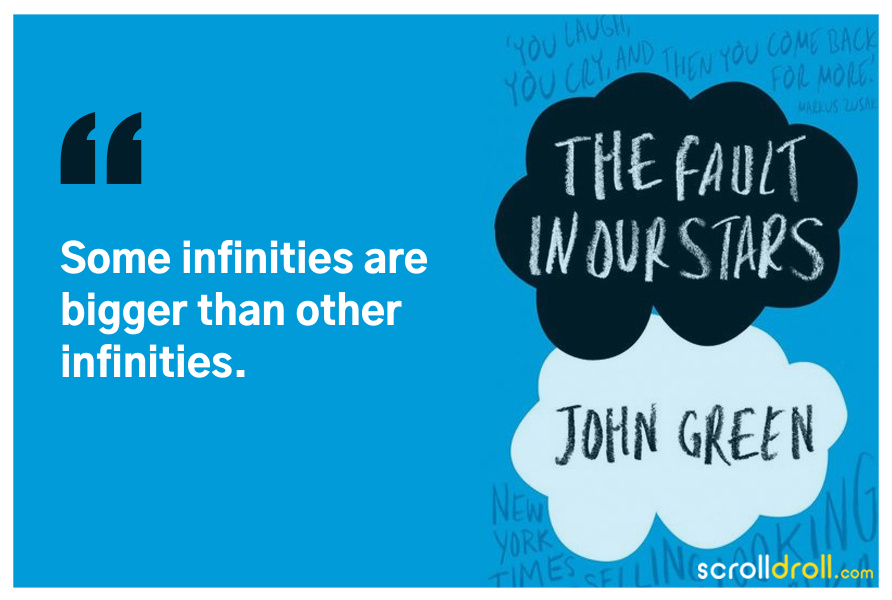 5. “The world is not a wish-granting factory.” 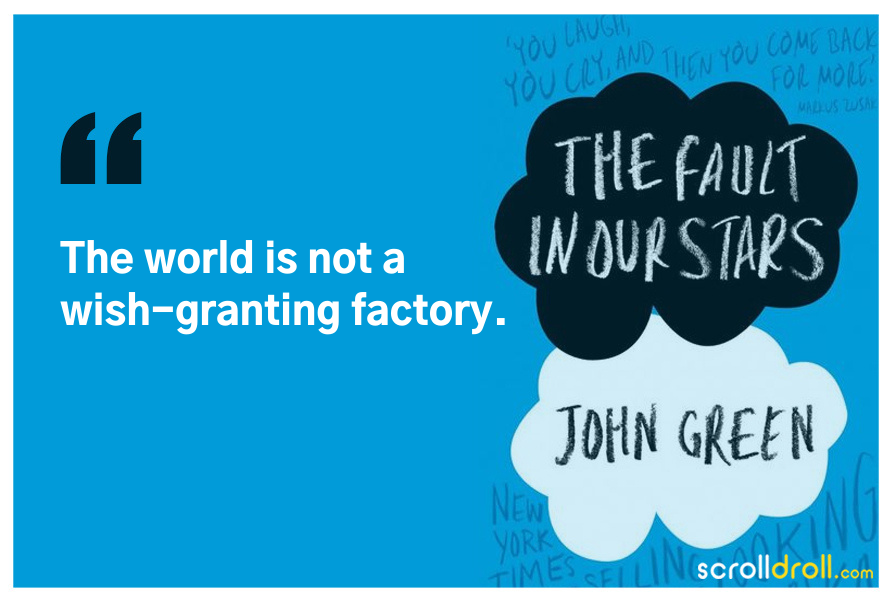 6. “Grief does not change you, Hazel. It reveals you.” 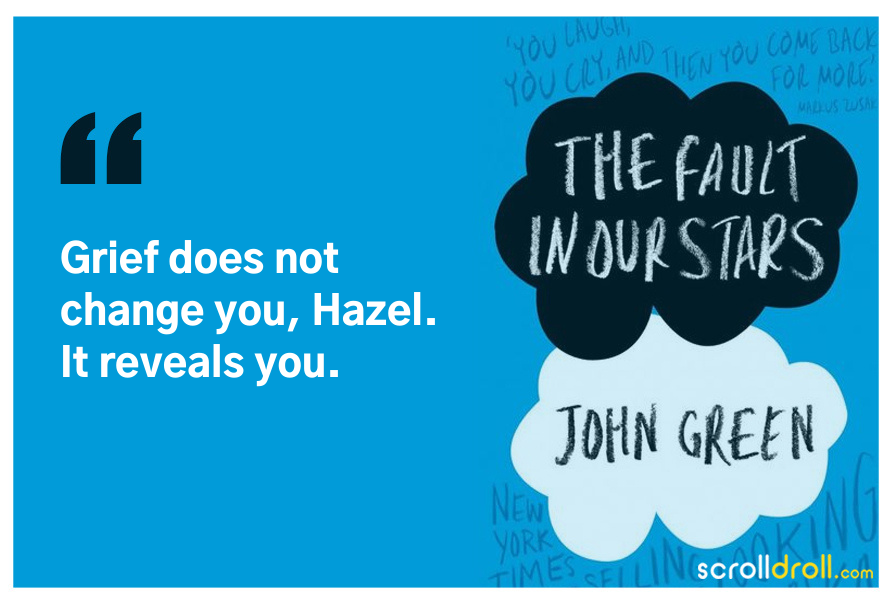 7. “Some tourists think Amsterdam is a city of sin, but in truth it is a city of freedom. And in freedom, most people find sin.” 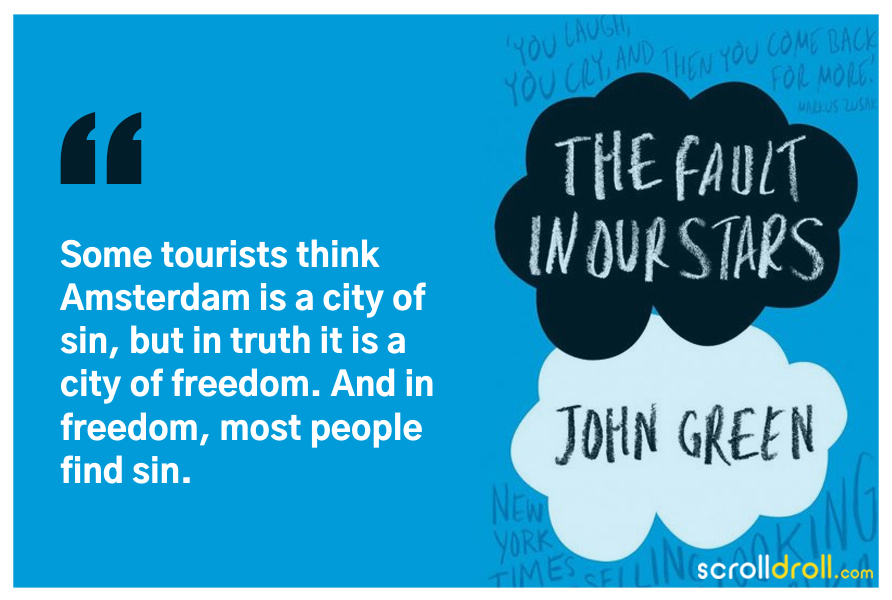 8. “It’s a metaphor, see: You put the killing thing right between your teeth, but you don’t give it the power to do its killing.” 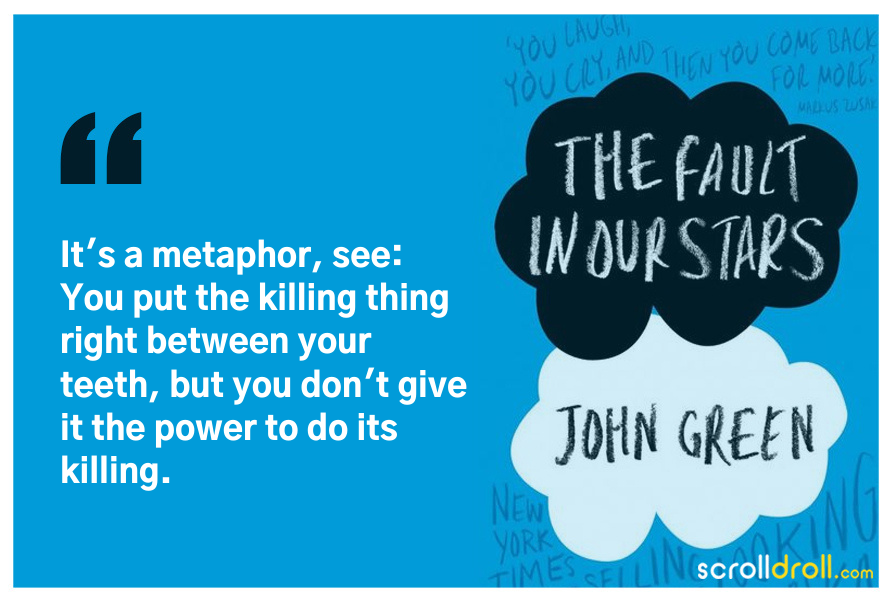 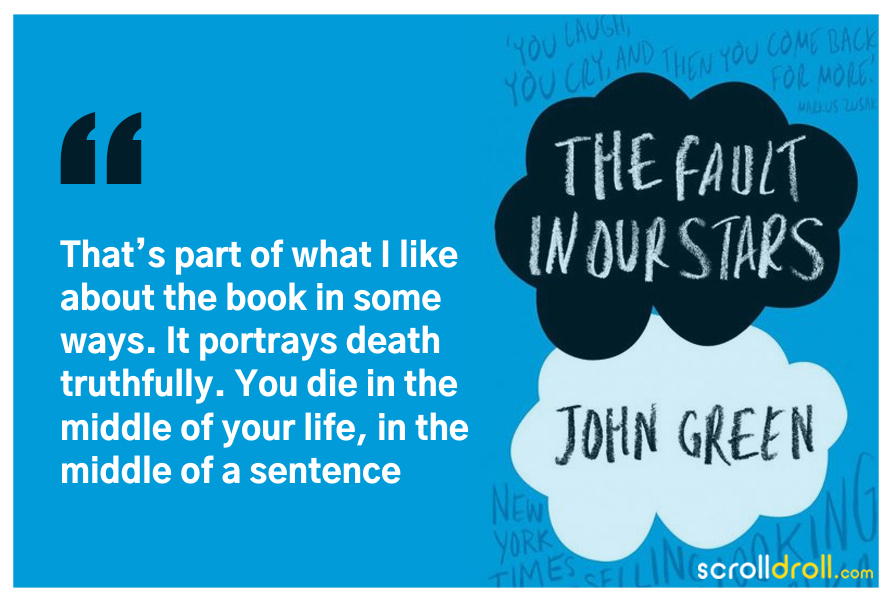 10. “But it is the nature of stars to cross, and never was Shakespeare more wrong than when he has Cassius note, ‘The fault, dear Brutus, is not in our stars / But in ourselves.” 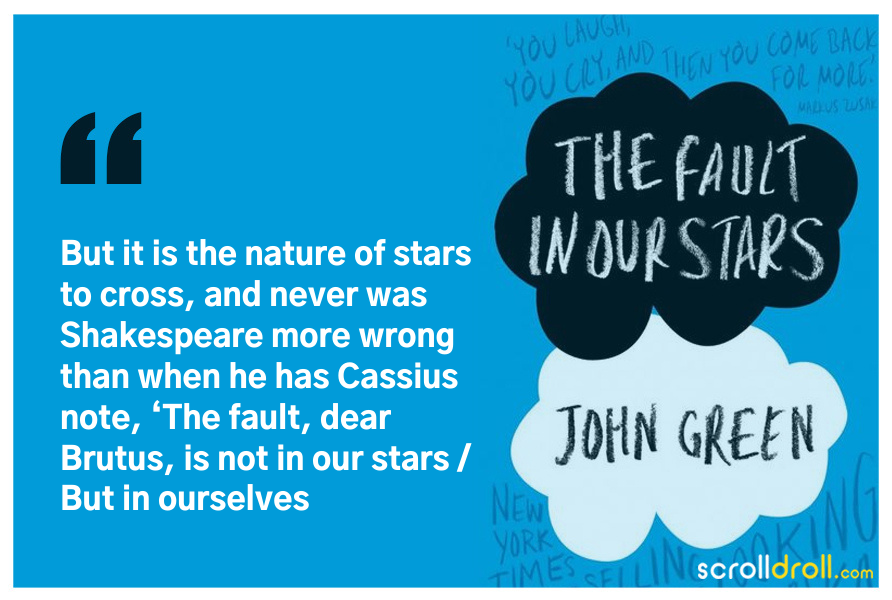 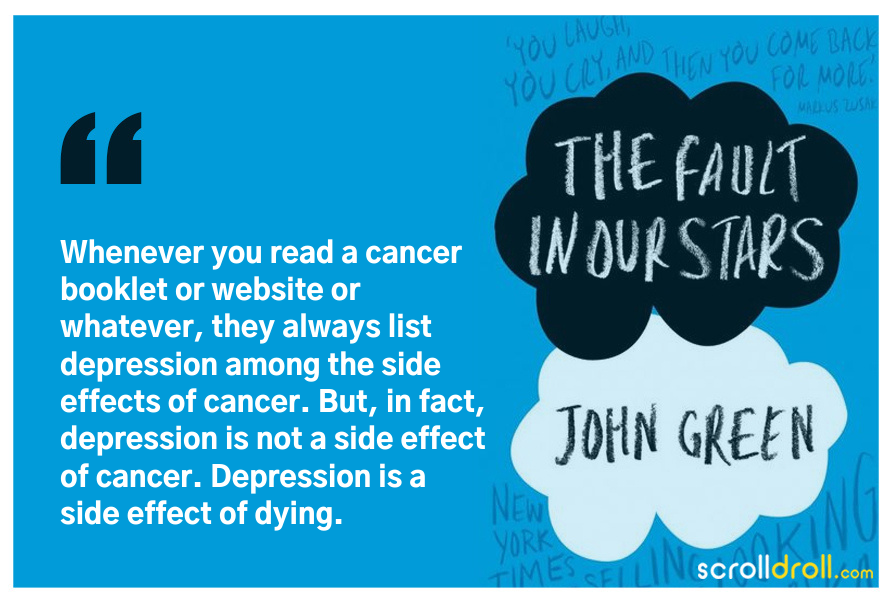 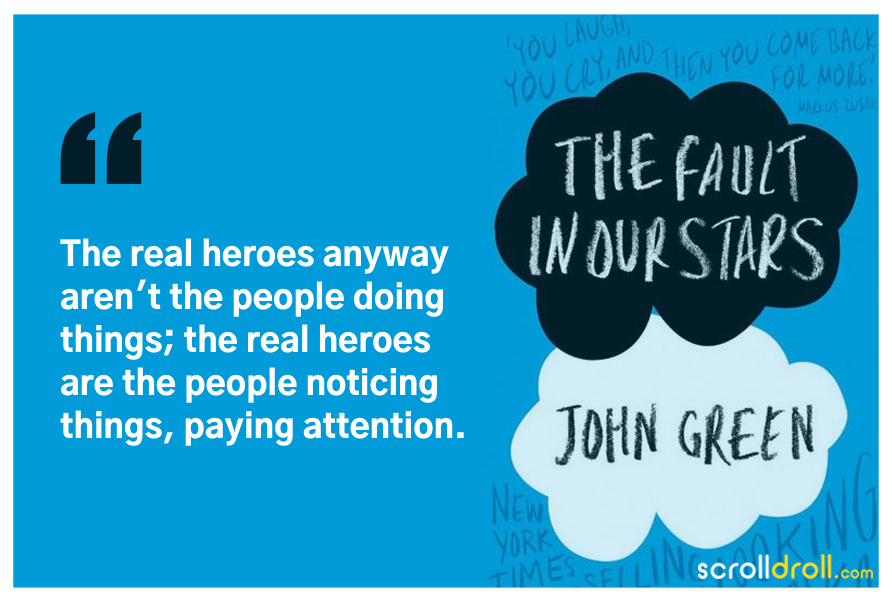 13. “You don’t get to choose if you get hurt in this world… but you do have some say in who hurts you. I like my choices.” 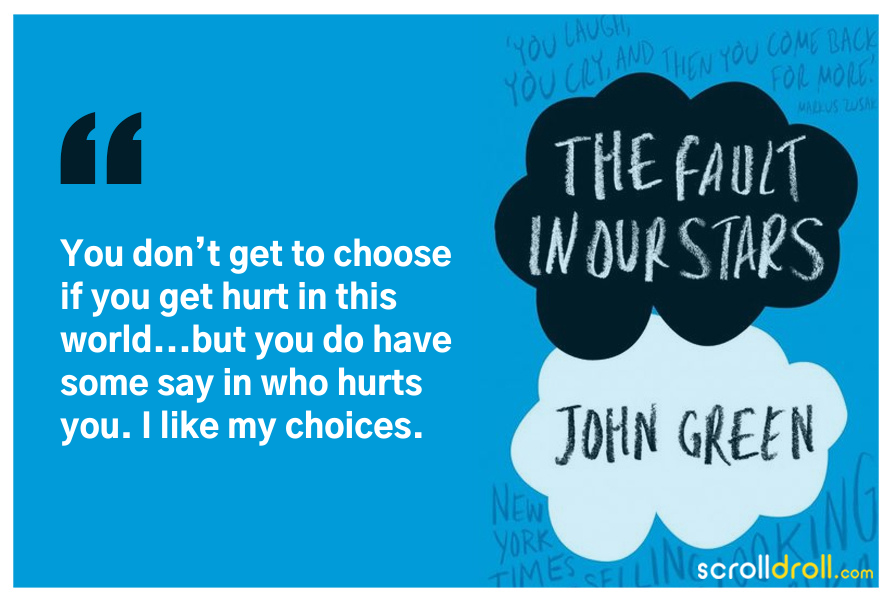 14. “We’re as likely to hurt the universe as we are to help it, and we’re not likely to do either.” 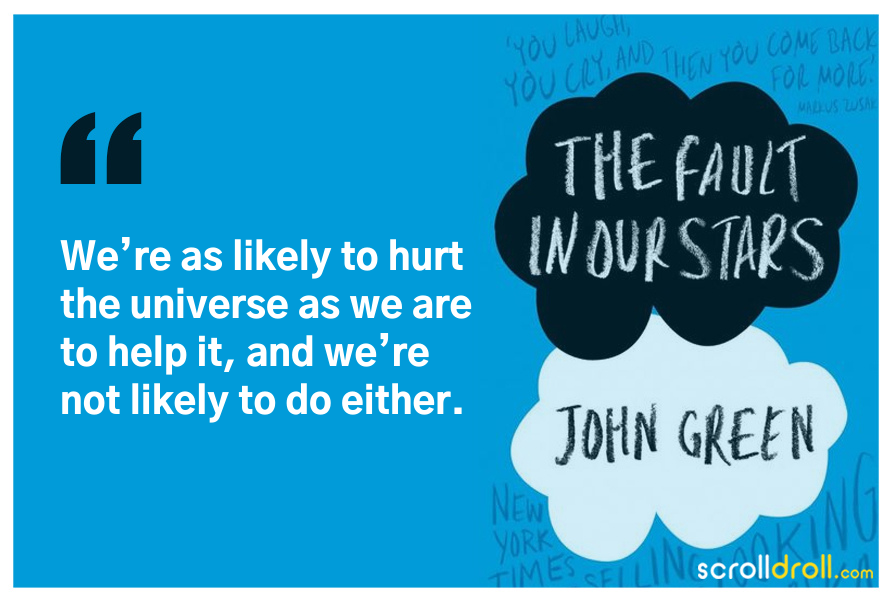 15. “The weird thing about houses is that they almost always look like nothing is happening inside of them, even though they contain most of our lives. I wondered if that was sort of the point of architecture.” 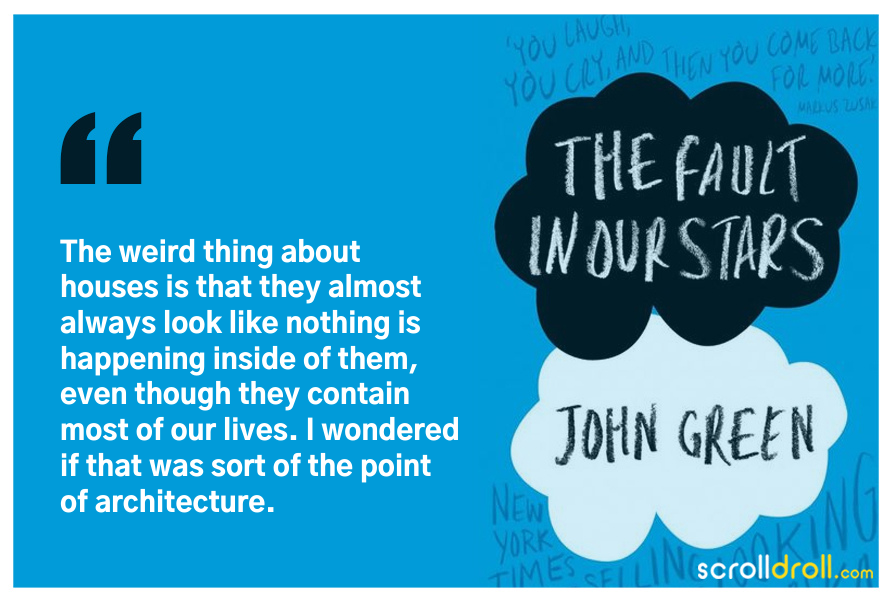 16. “Come over here so I can examine your face with my hands and see deeper into your soul than a sighted person ever could.” 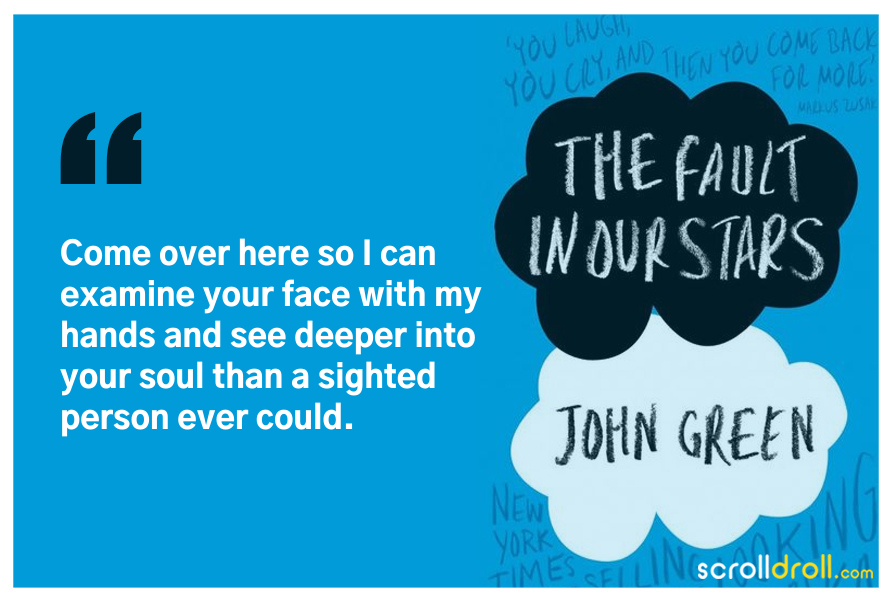 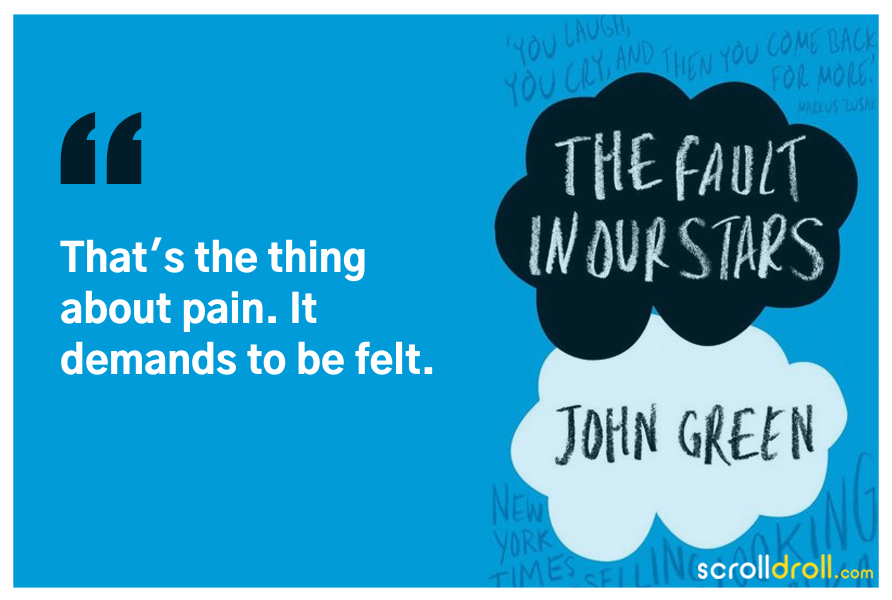 18. “Even cancer isn’t a bad guy really: Cancer just wants to be alive.” 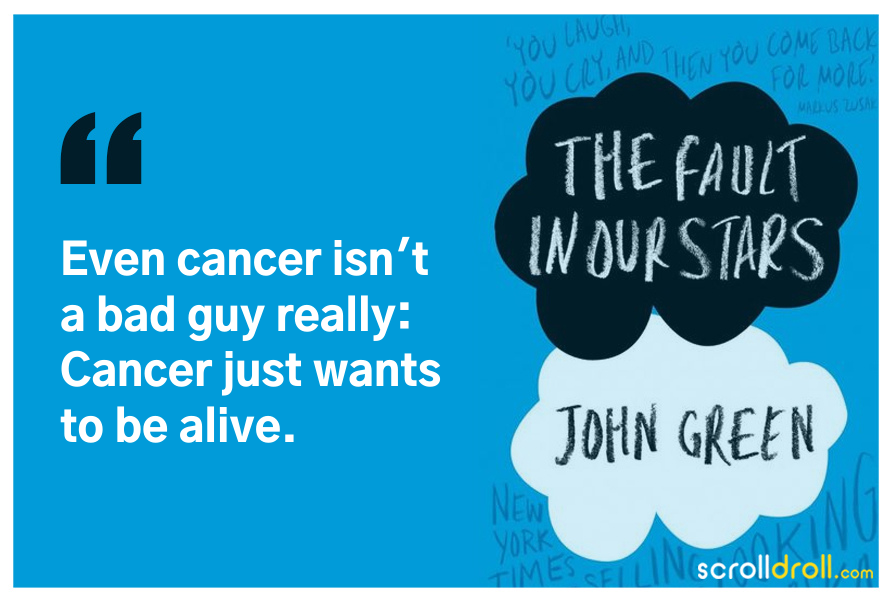 19. “Everybody should have true love, and it should last at least as long as your life does.” 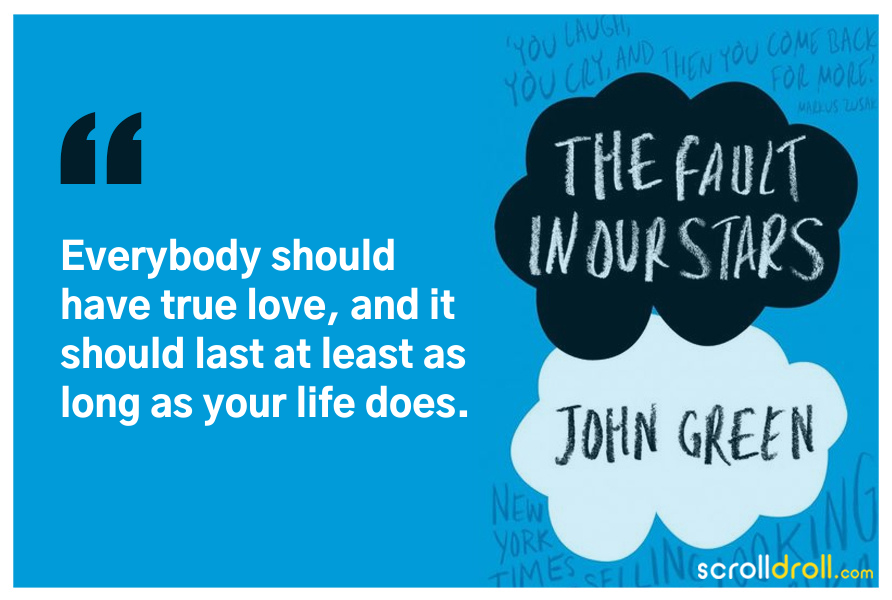 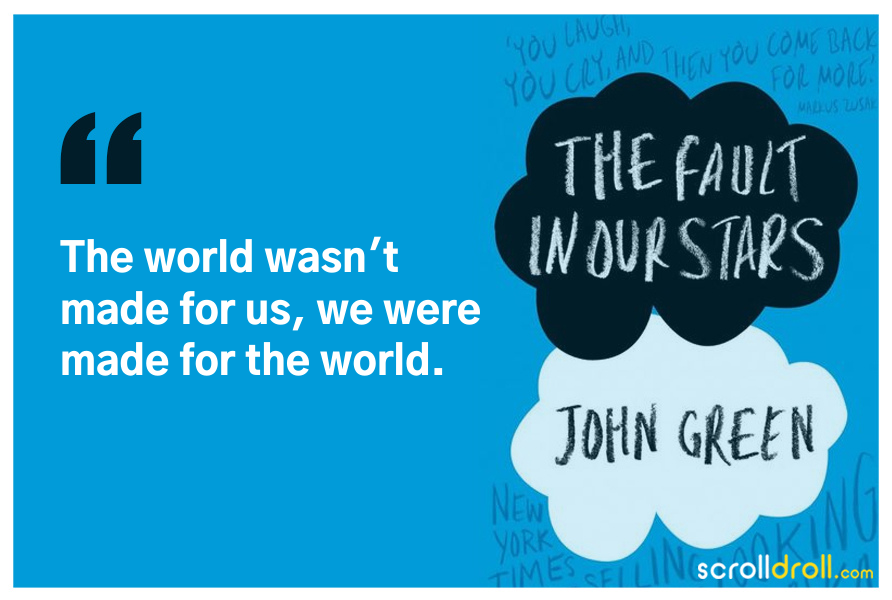 21. “You can love someone so much… but you can never love people as much as you can miss them.” 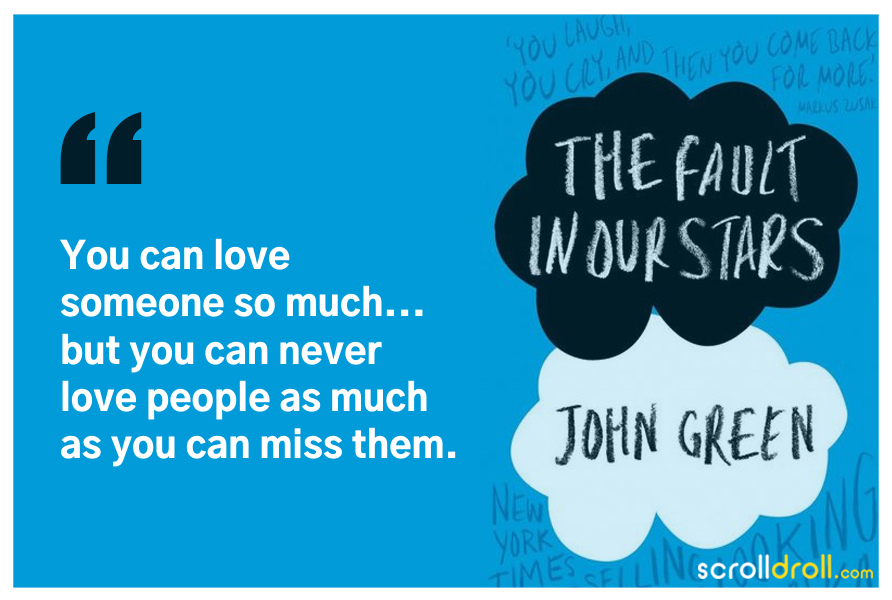 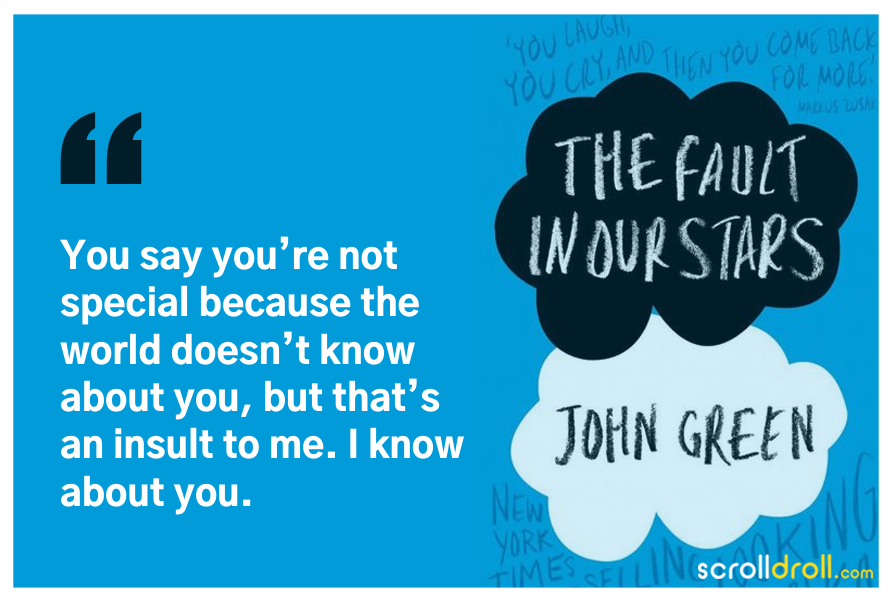 23. “I’m in love with you, and I’m not in the business of denying myself the simple pleasure of saying true things.” 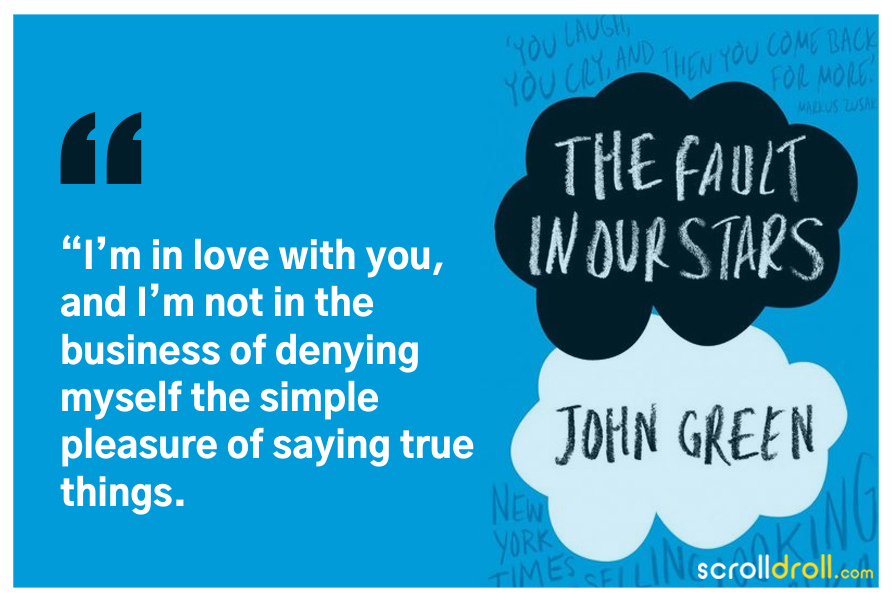 24. “I will not tell you our love story, because- like all real love stories- it will die with us, as it should.” 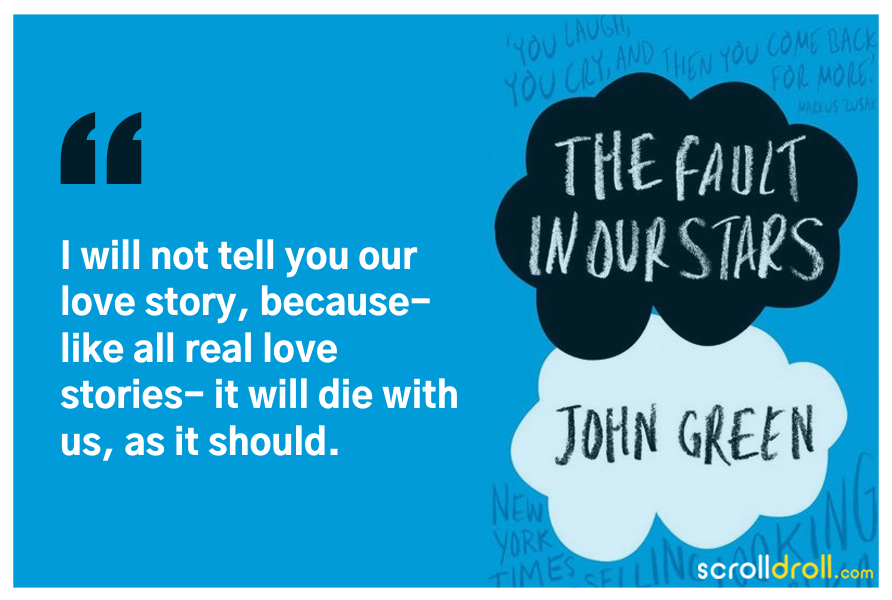 25. “Sometimes, you read a book and it fills you with this weird evangelical zeal, and you become convinced that the shattered world will never be put back together unless and until all living humans read the book.” 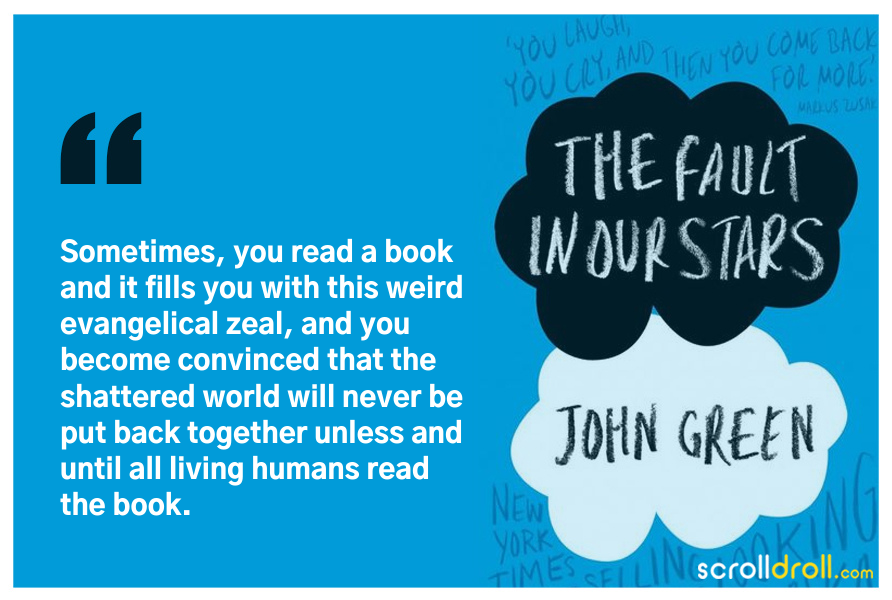 Endearing, isn’t it? I’m not crying, you are crying! Now that we have come to the end of the list, let me know some of your favourite quotes from The Fault in Our Stars in the comments section.