12 Quotes From Vishnu Purana For A Meaningful Life

An ancient and highly revered text of Hindu belief system, Vishnu Purana is one of the 18 Mahapuranas that speaks about the nature of the universe and everything that is in it. It has also been a source of ancient Indian wisdom and a guiding light to the Indian civilization to lead a better life.

We bring you some of the best quotes from Vishnu Purana that will give you wisdom to live a more meaningful life. 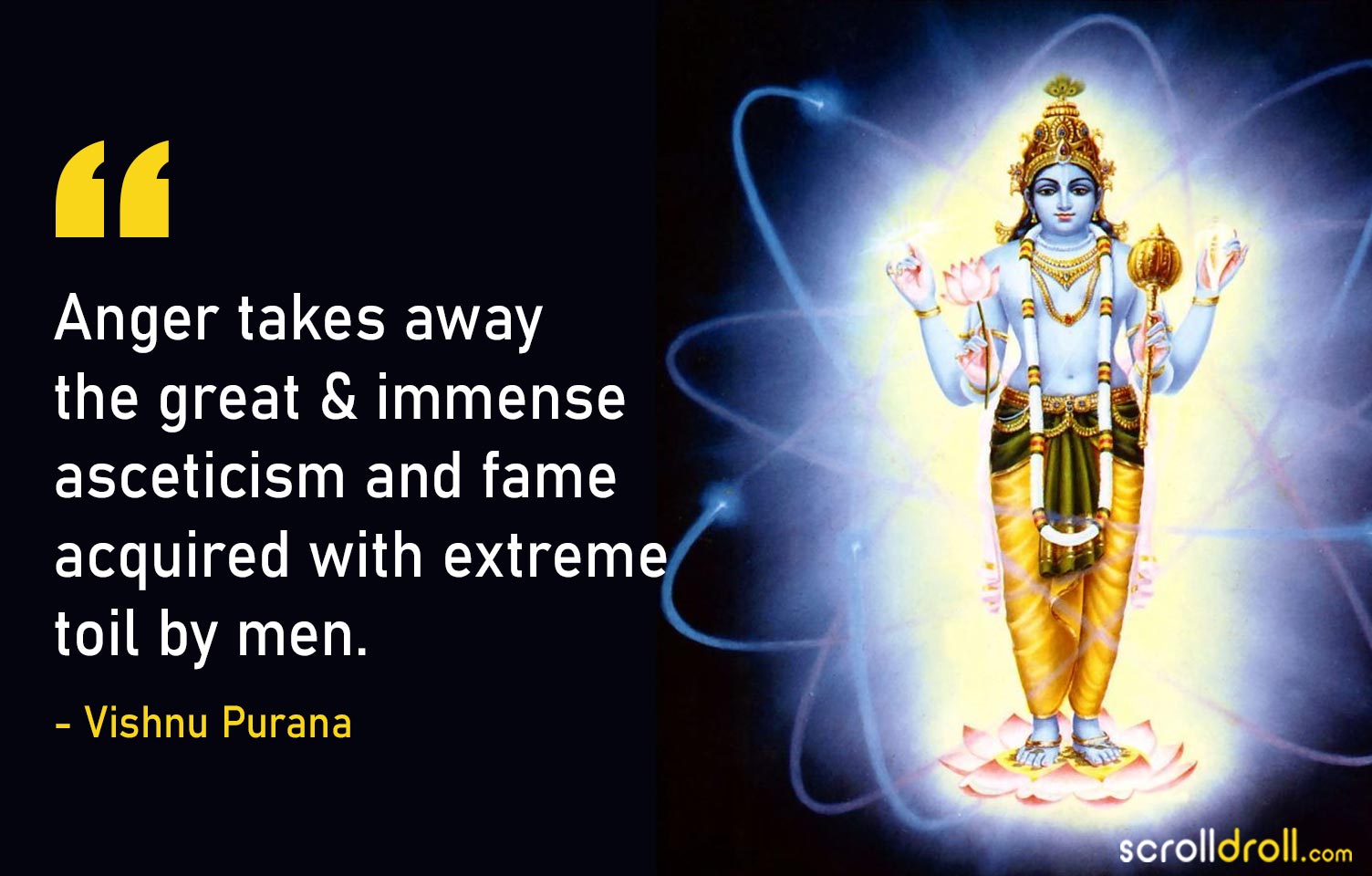 2. It is better to suffer a small loss than acquiring wealth by hostility. – Vishnu Purana 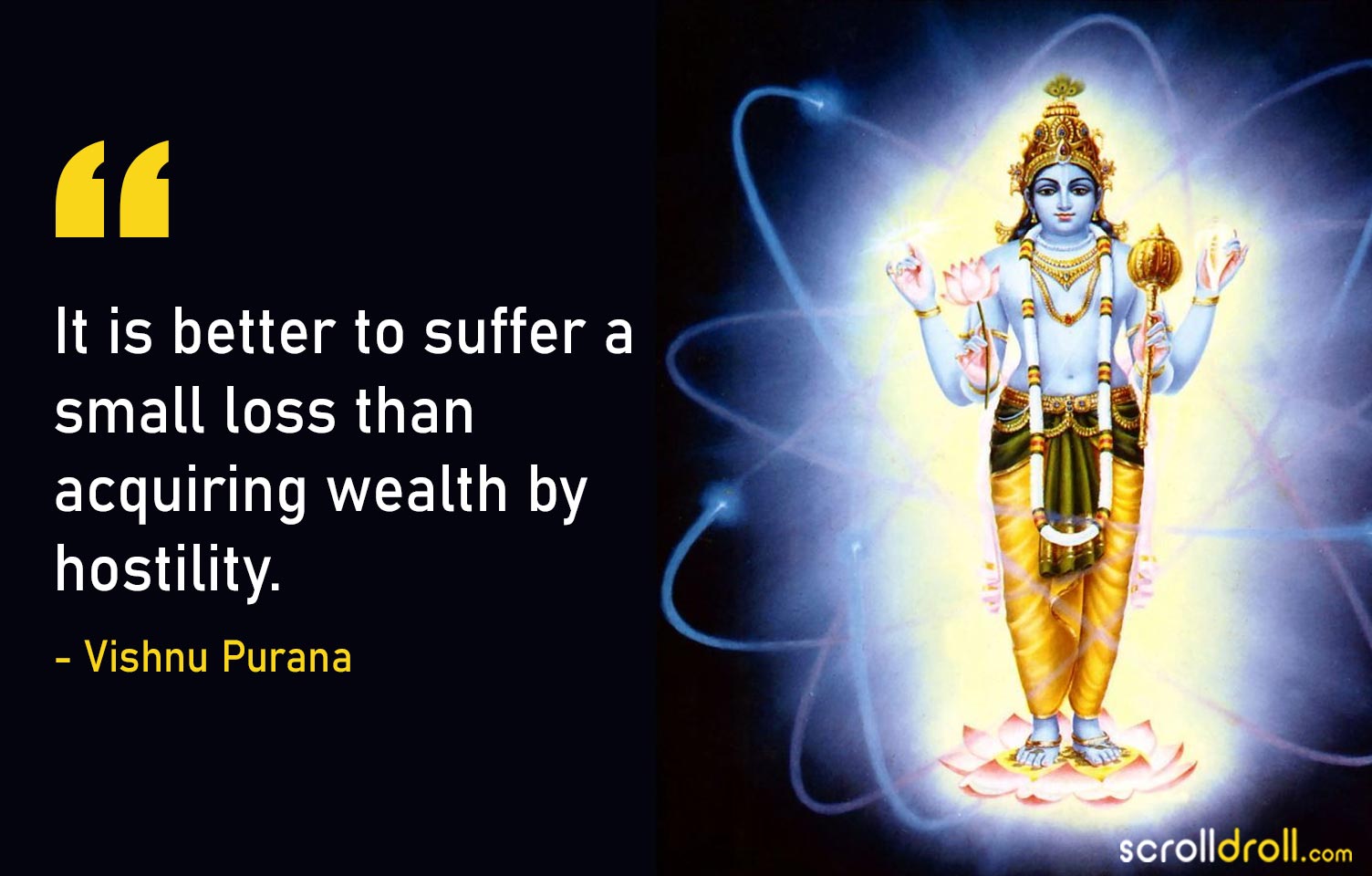 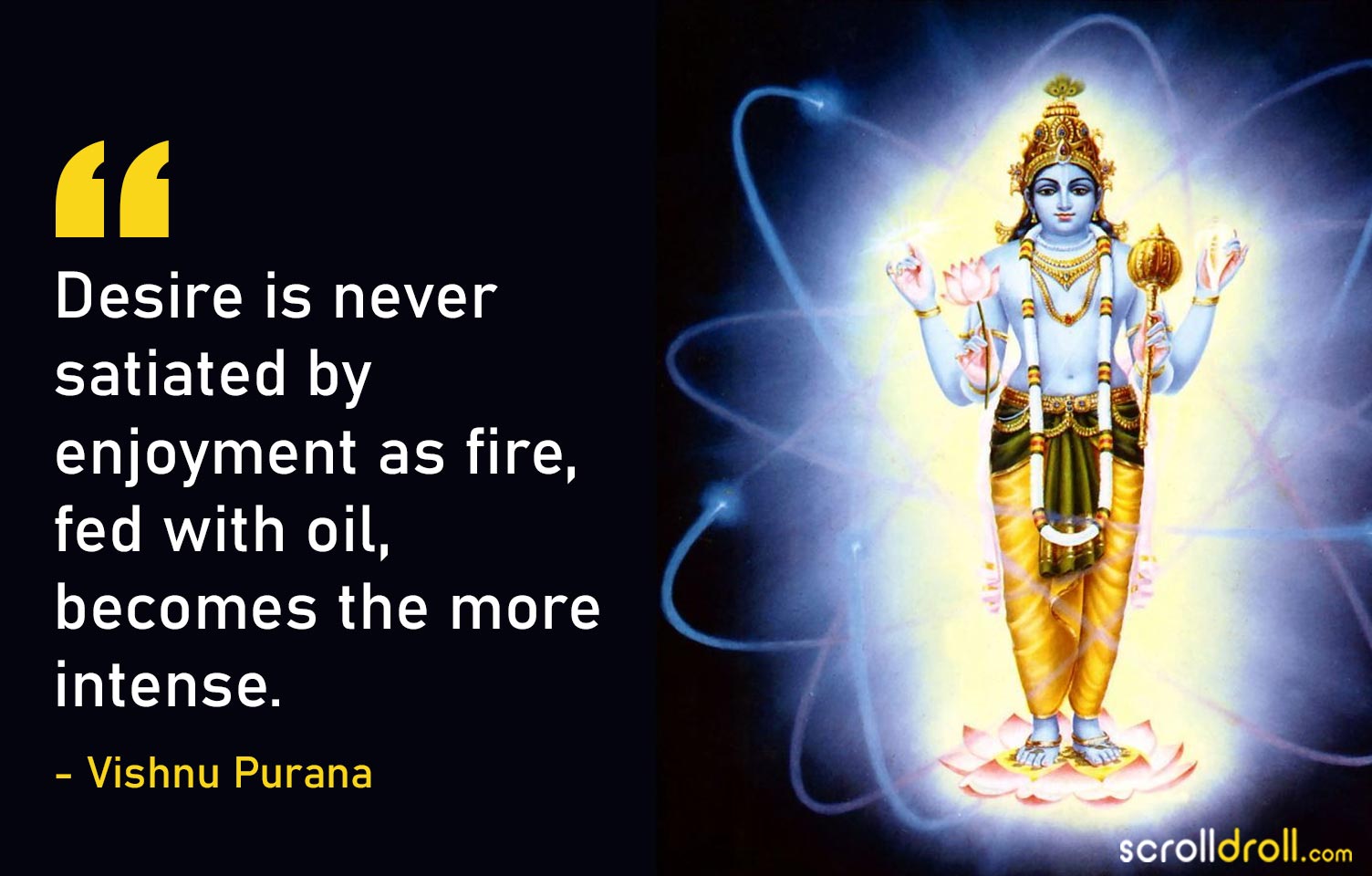 4. When man does not cherish any sinful feeling towards creatures and looks on all with an equal eye – he then finds everything full of pleasure and delight. – Vishnu Purana 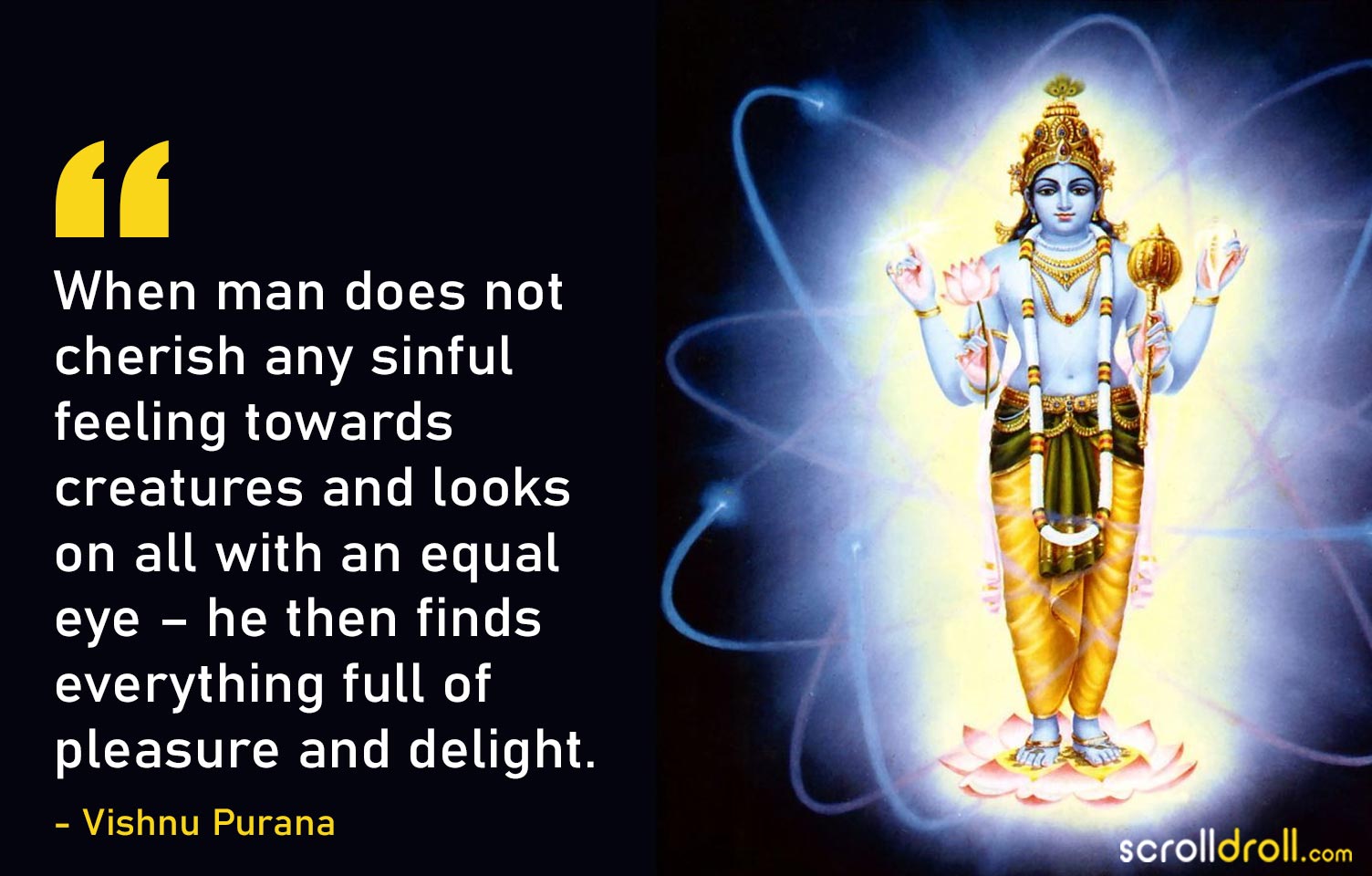 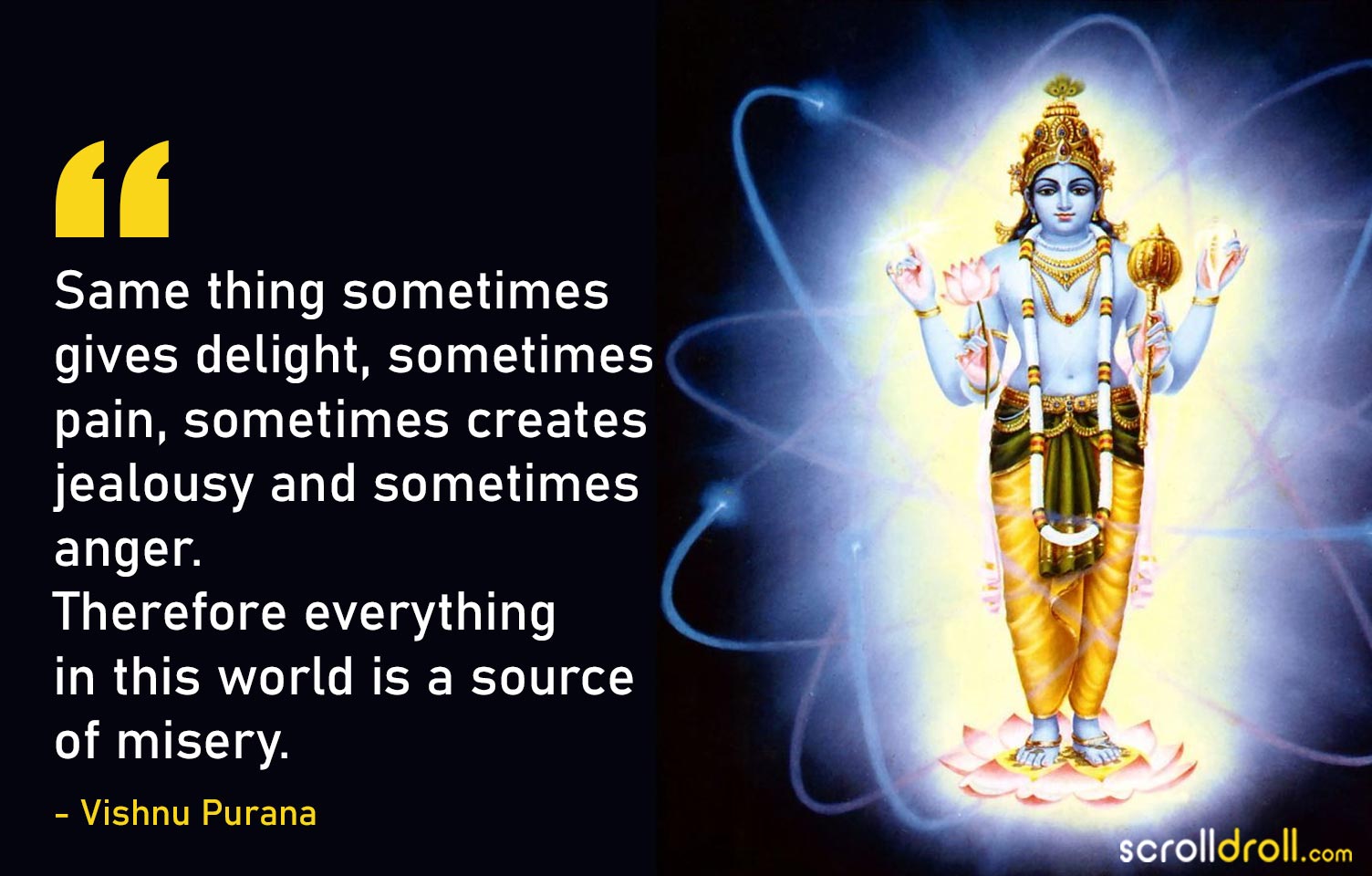 6. Vishnu is always pleased with that pure-minded man whose mind is not polluted with anger and other passions. – Vishnu Purana 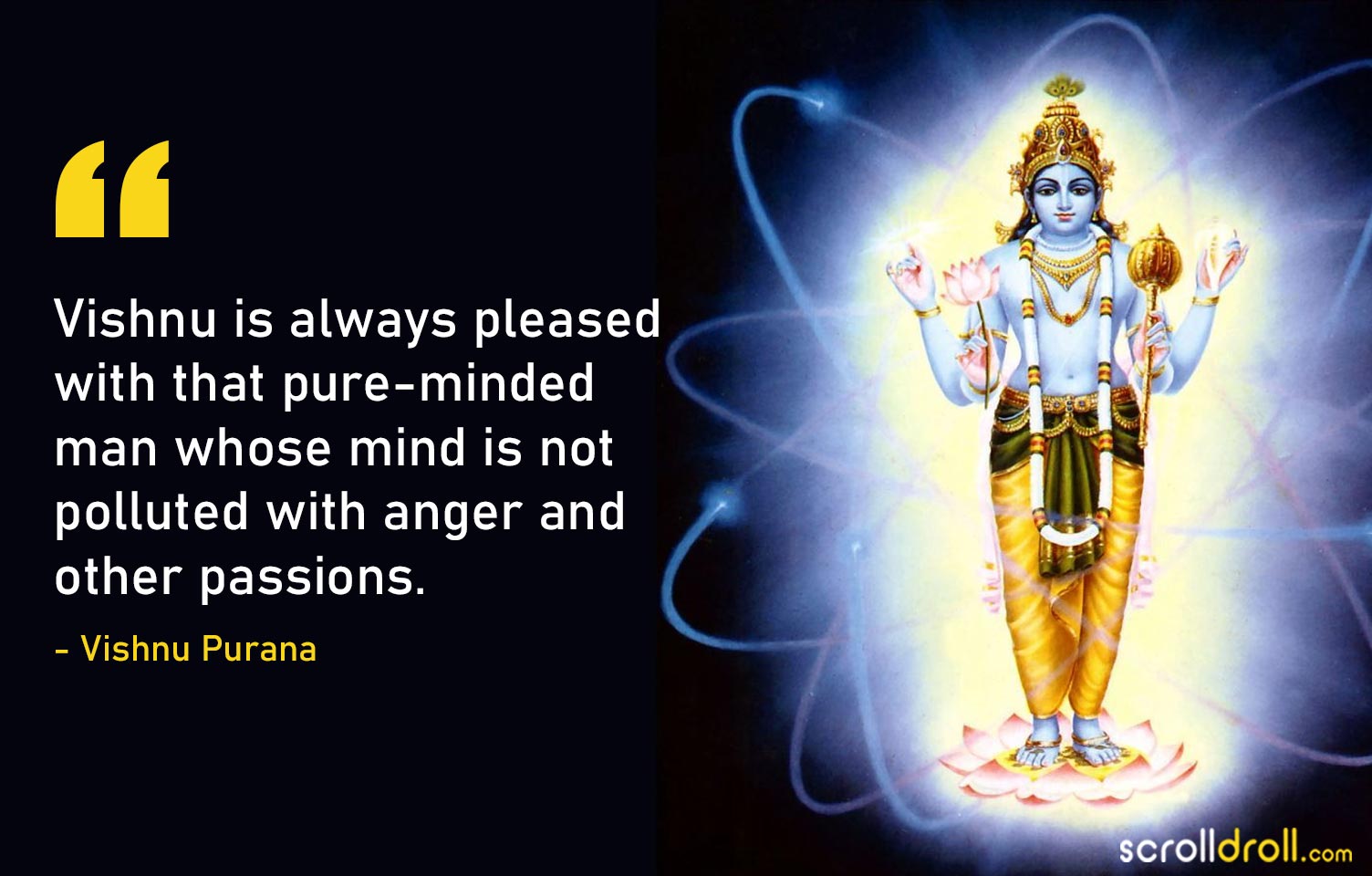 7. Attachment & passion are the greatest cause of sorrow. – Vishnu Purana 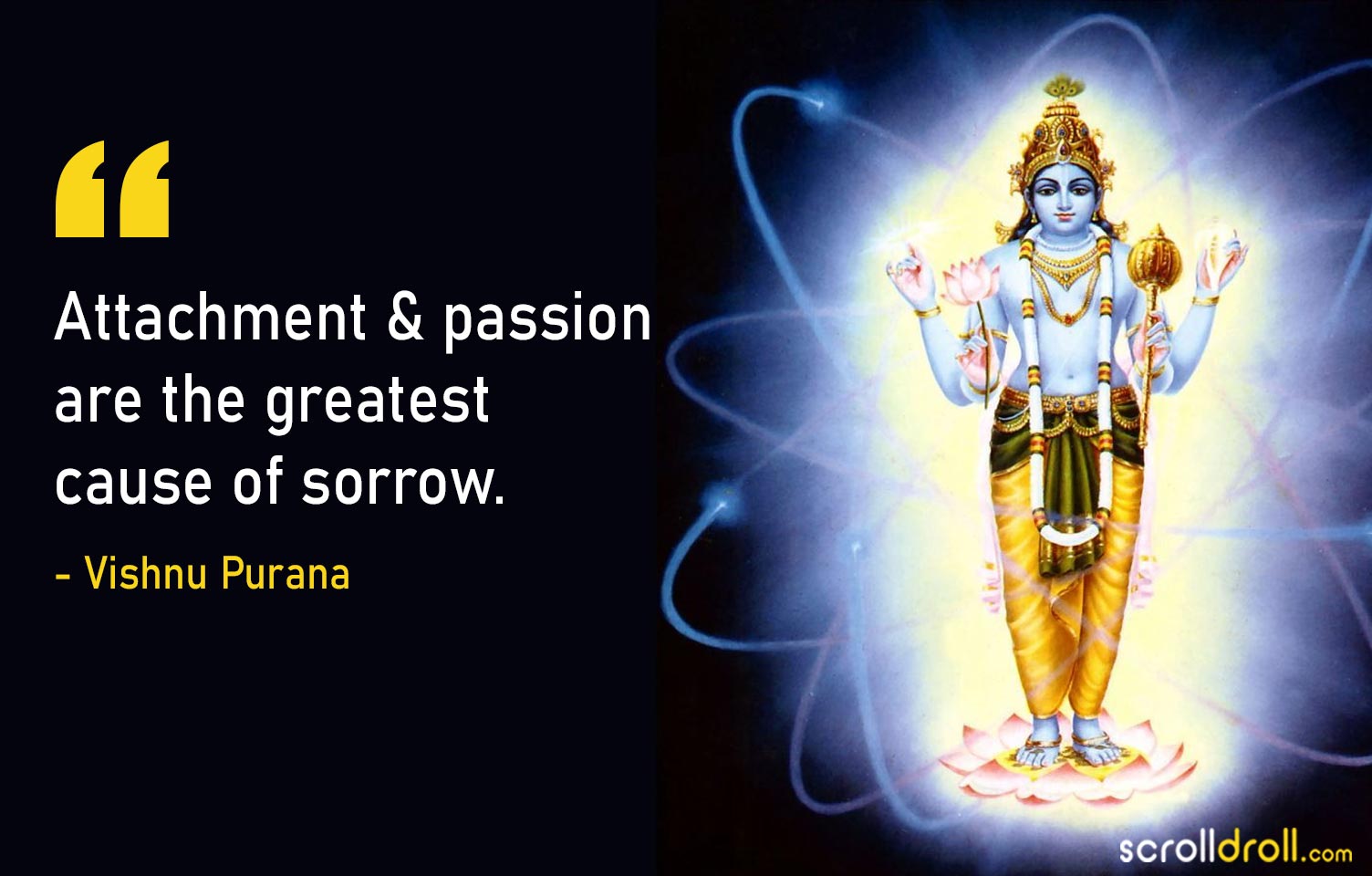 8. The earth is upheld by the truthfulness of those who have controlled their passions, and who, always following pious observances, are not sullied by desire, covetousness and anger. – Vishnu Purana 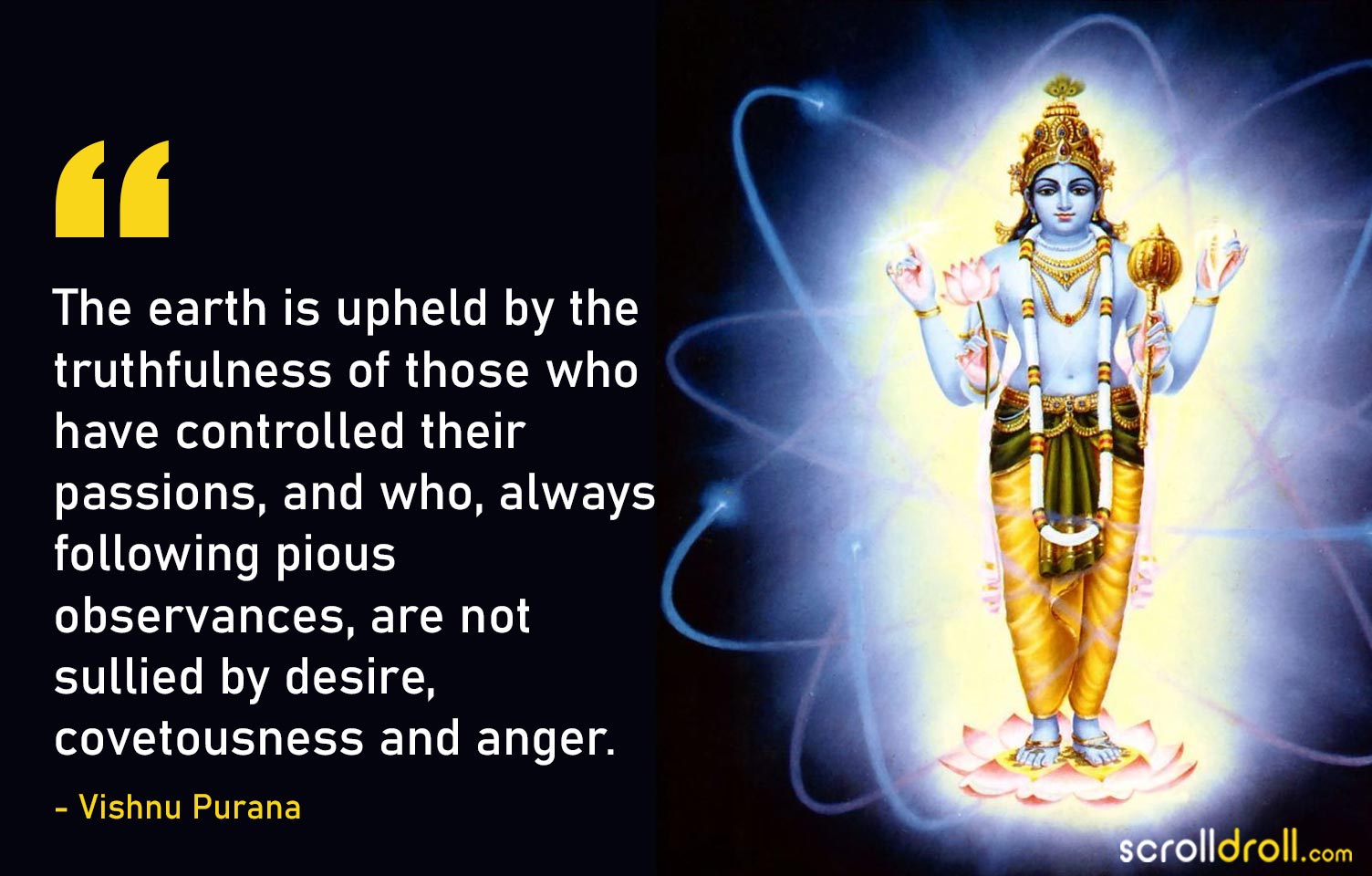 9. This soul is of its own nature, pure, composed of happiness & wisdom. The properties of pain, ignorance and impurity, are those of Prakriti, not of soul. – Vishnu Purana 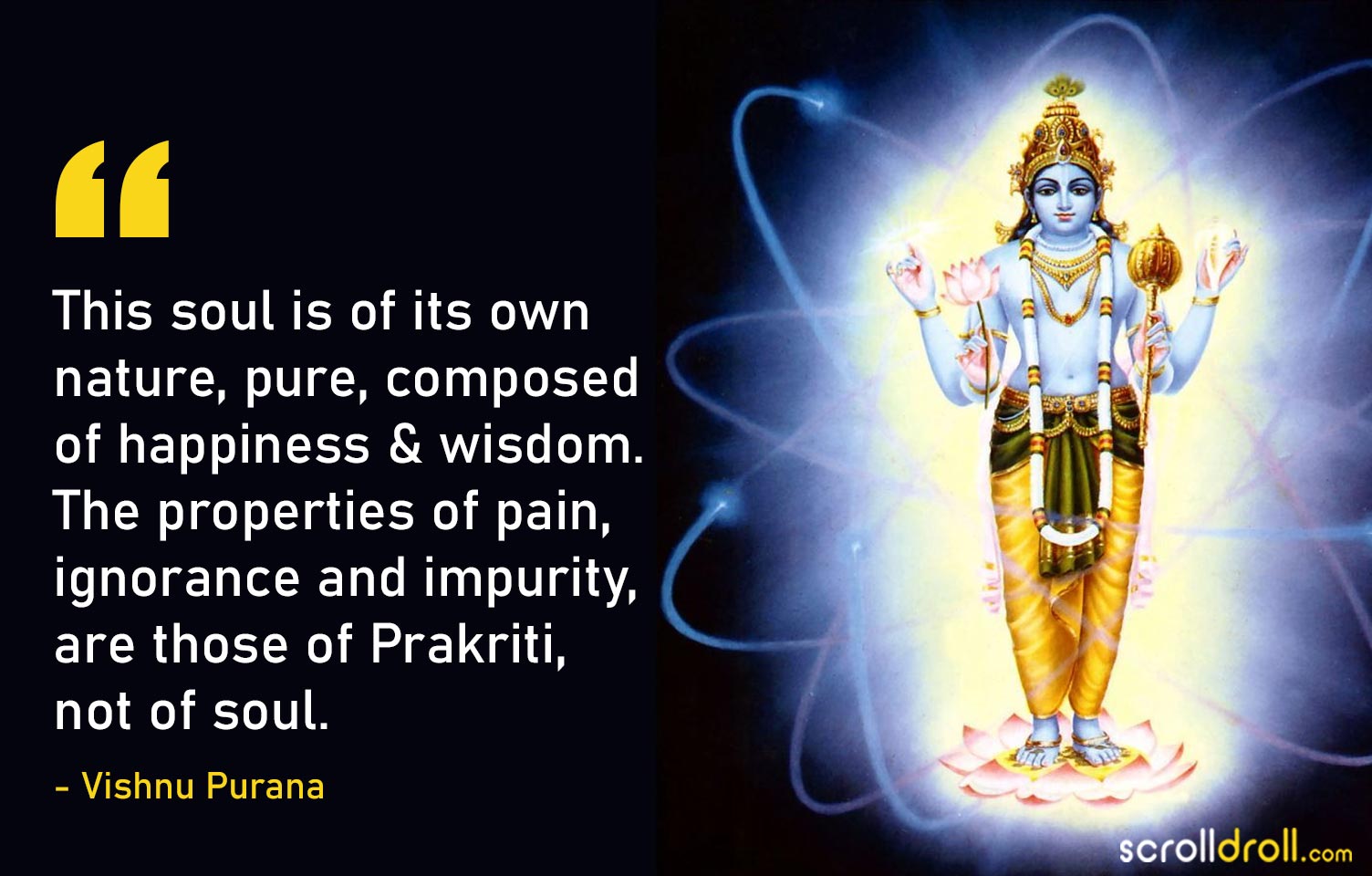 10. Out of Vishnu this universe has arisen, in him it exists, he is the one who governs its existence and destruction, he is the universe. – Vishnu Purana 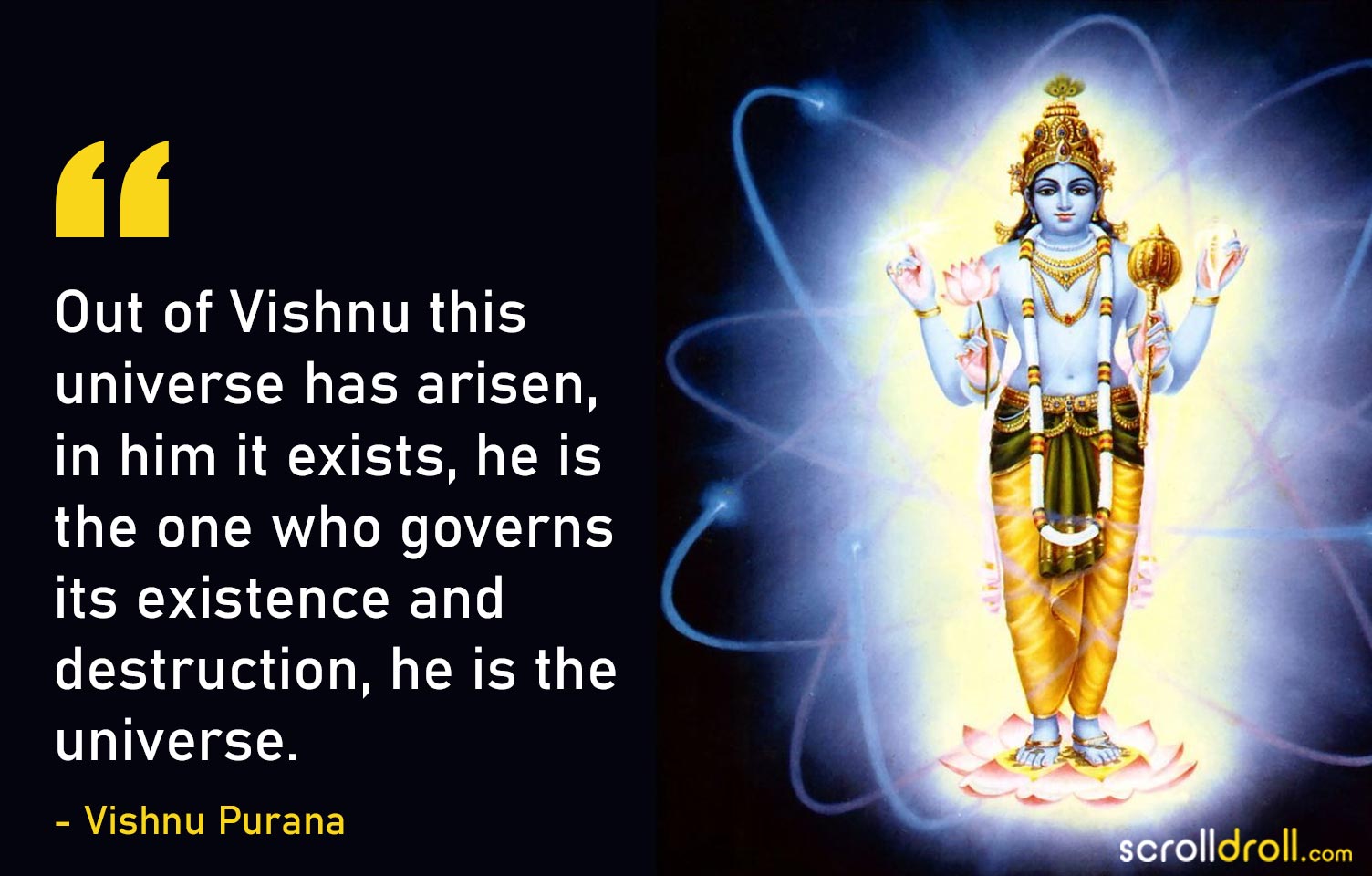 11. He who speaks wisely, moderately and compassionately proceeds to the regions which are perpetual sources of bliss. – Vishnu Purana 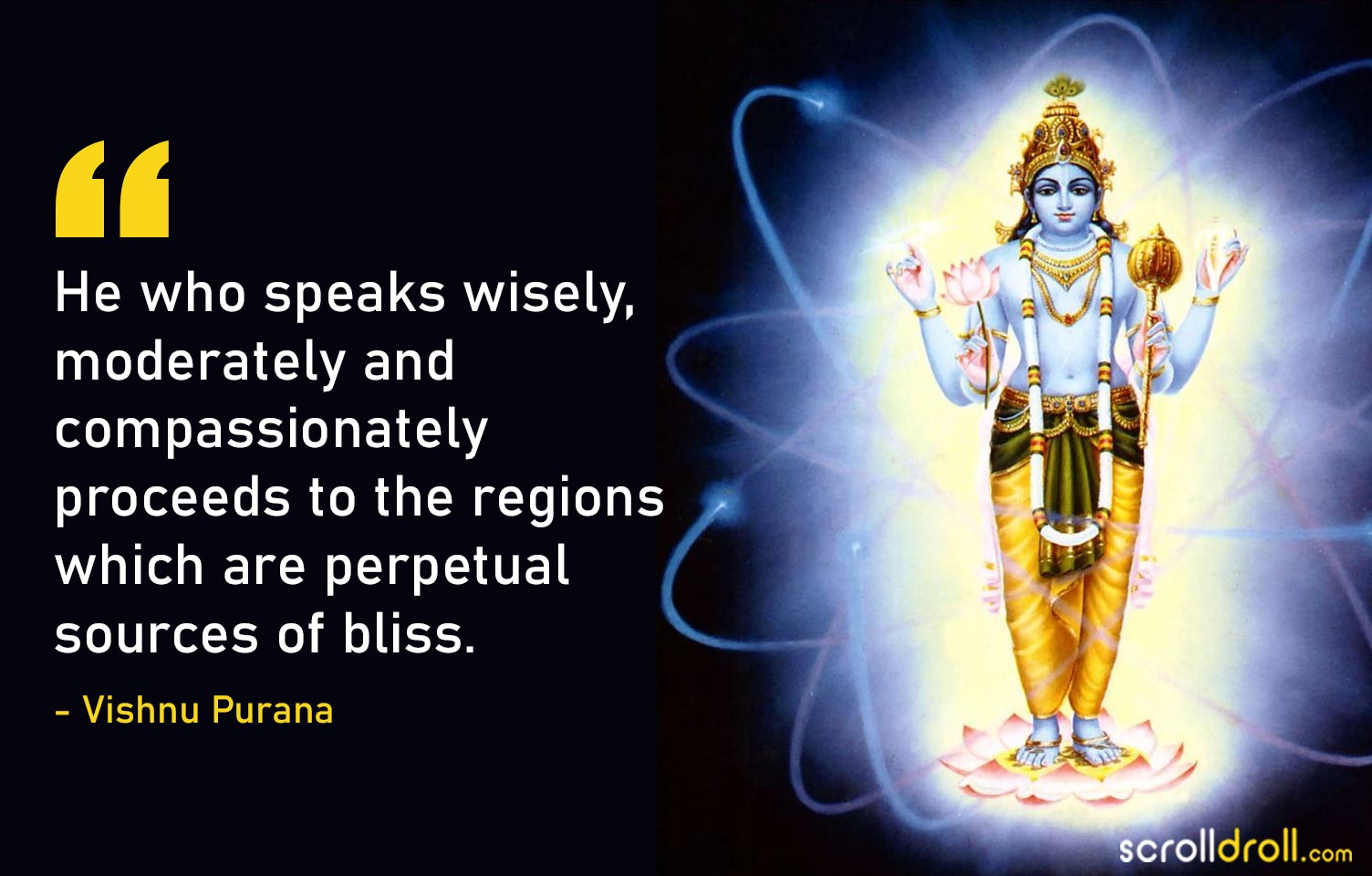 12. When Man does not cherish any sinful feeling towards creatures and looks on all with an equal eye – he then finds everything full of pleasure and delight. – Vishnu Purana

We hope these Quotes from Vishnu Purana