15 Rajiv Gandhi Quotes About His Vision For A New India

India’s sixth and youngest Prime Minister so far, Rajiv Gandhi was one of the most popular political leaders of modern India.  His vision, ideas and Rajiv Gandhi quotes continues to inspire the nation. Rajiv Gandhi was sworn in as the Prime Minister of India at an extremely crucial time after the assassination of Indira Gandhi. While dealing with sensitive international issues like the cold war and Sri Lankan Civil war, Rajiv Gandhi also ushered India’s computer and telecom revolution as well as the Panchayati Raj which were important landmarks in the history of modern India.

We bring you some of the most important and powerful Rajiv Gandhi quotes. 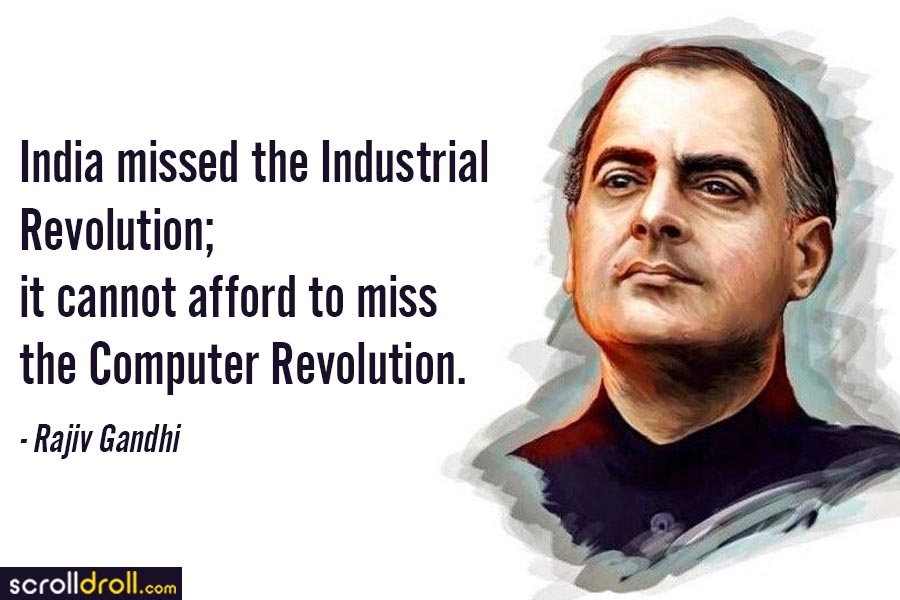 2. For some days, people thought that India was shaking. But there are always tremors when a great tree falls. – Rajiv Gandhi 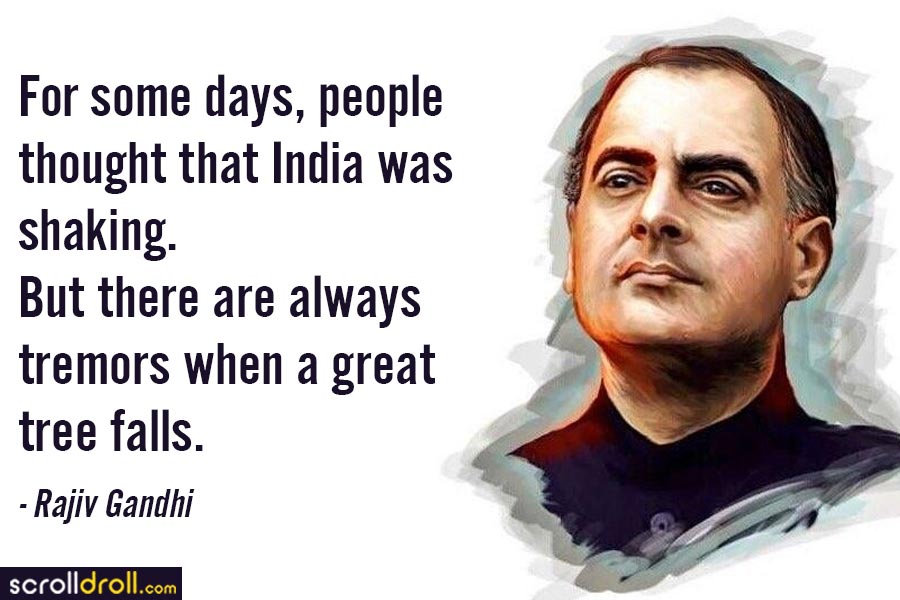 3. She was mother not only to me but to the whole nation. She served the Indian people to the last drop of her blood. – Rajiv Gandhi 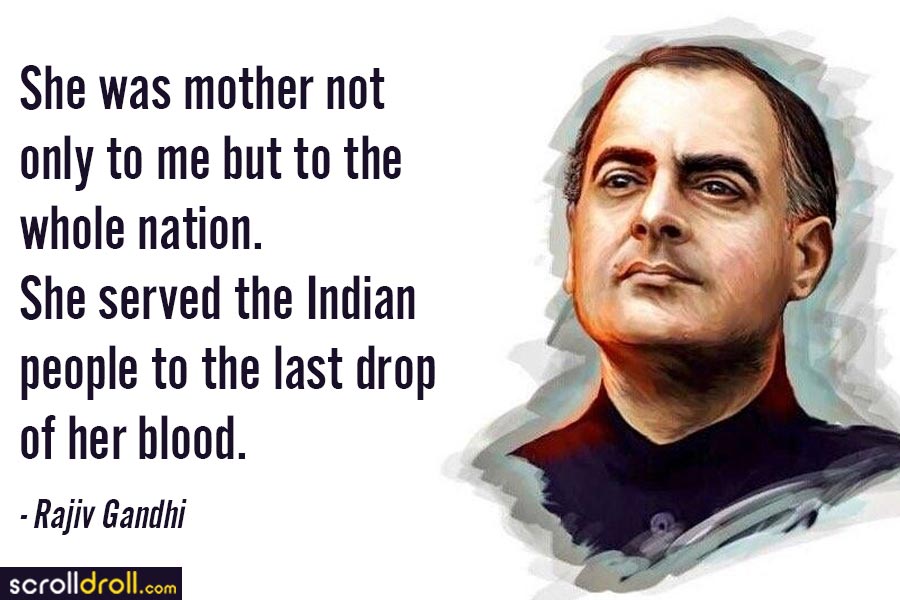 4. Education must be a great equaliser in our society. It must be the tool to level the differences that our various social systems have created over the past thousands of years. – Rajiv Gandhi 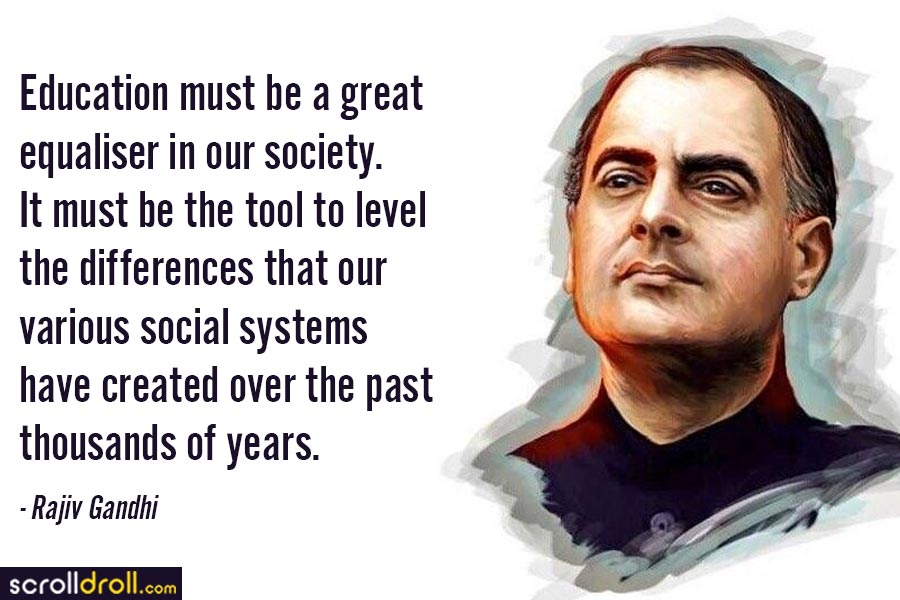 5. Our task today is to bring India to the threshold of the twenty-first century, free of burden of poverty, legacy of our colonial past, and capable of meeting the rising aspirations of our people. – Rajiv Gandhi 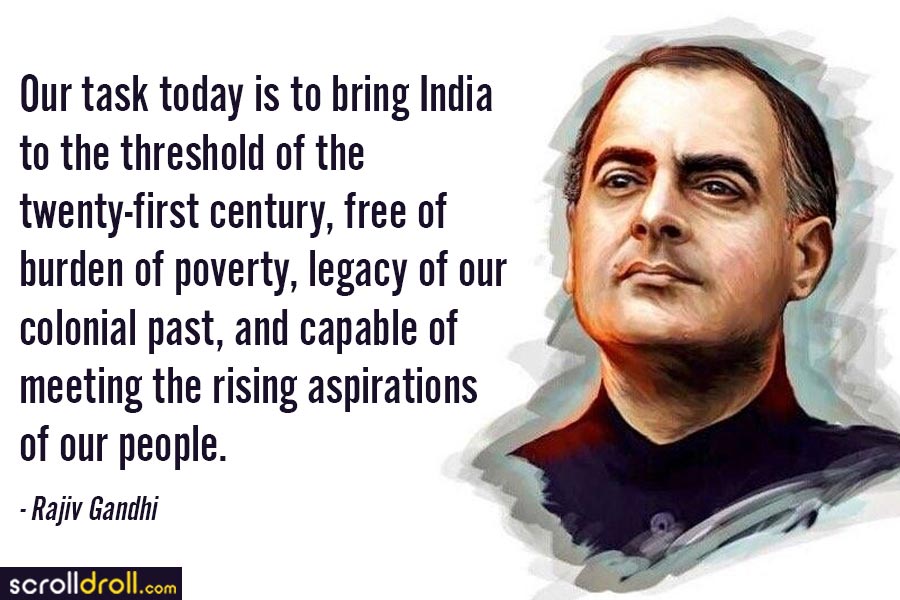 6. Women are the social conscience of a country. They hold our societies together. – Rajiv Gandhi 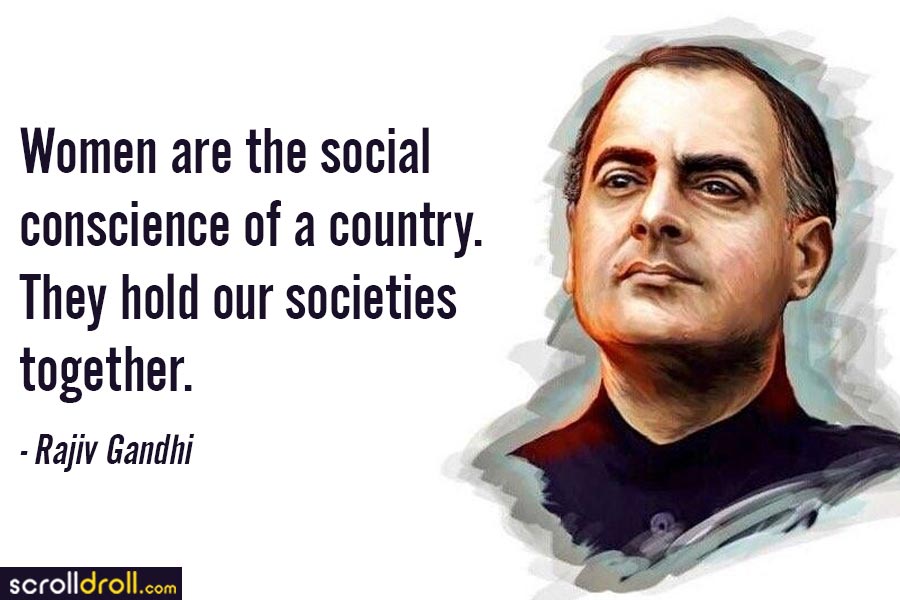 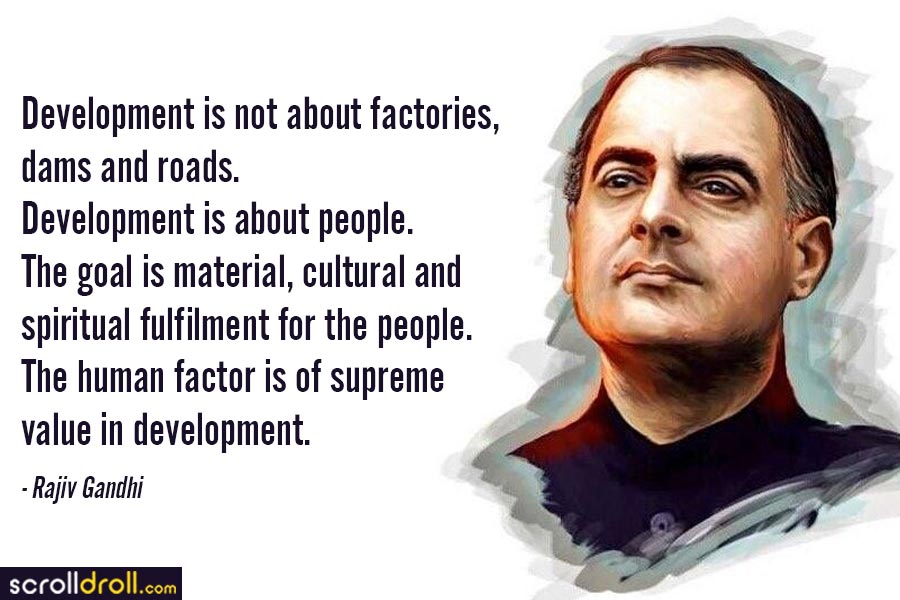 8. India is an Old country but a young nation… I am young and I too have a dream, I dream of India Strong, Independent, Self-Reliant and in the front rank of the nations of the world, in the service of mankind. – Rajiv Gandhi 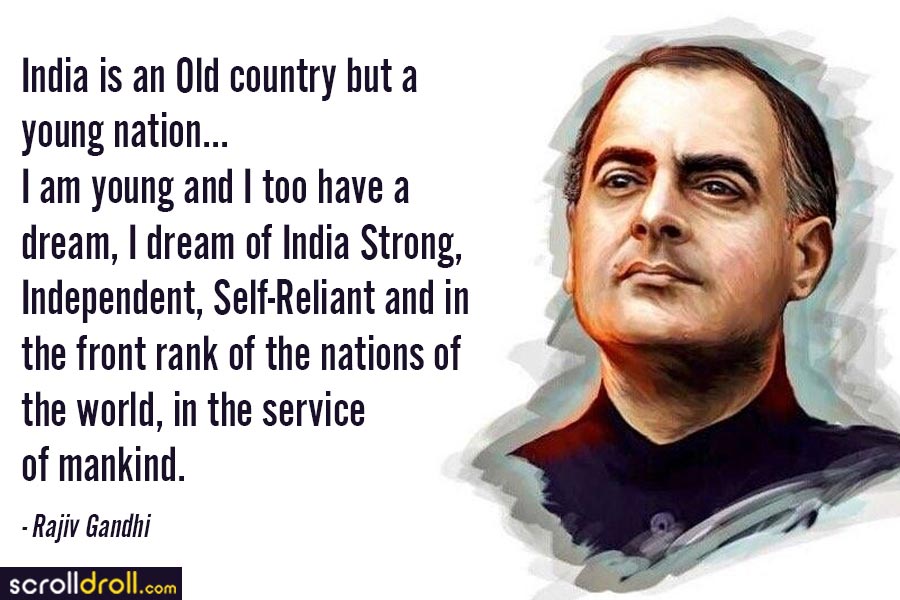 9. Our task today is to bring India to the threshold of the twenty-first century, free of burden of poverty, legacy of our colonial past, and capable of meeting the rising aspirations of our people. – Rajiv Gandhi 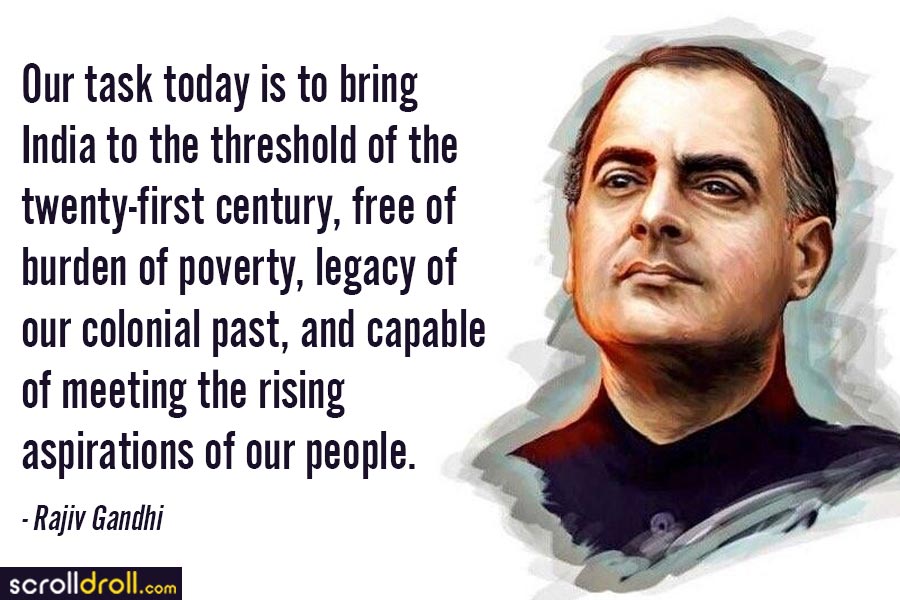 10. Better a brain drain than a brain in the drain. – Rajiv Gandhi 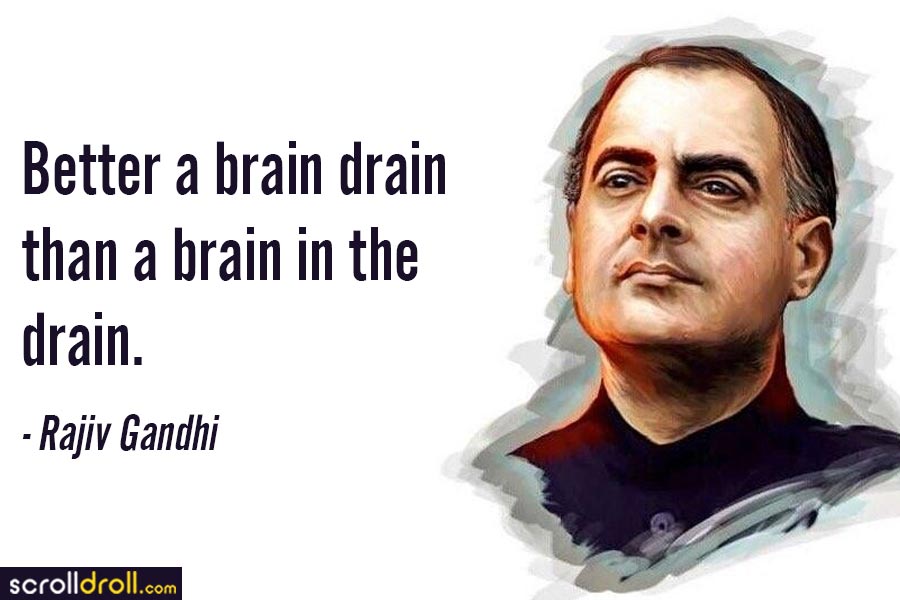 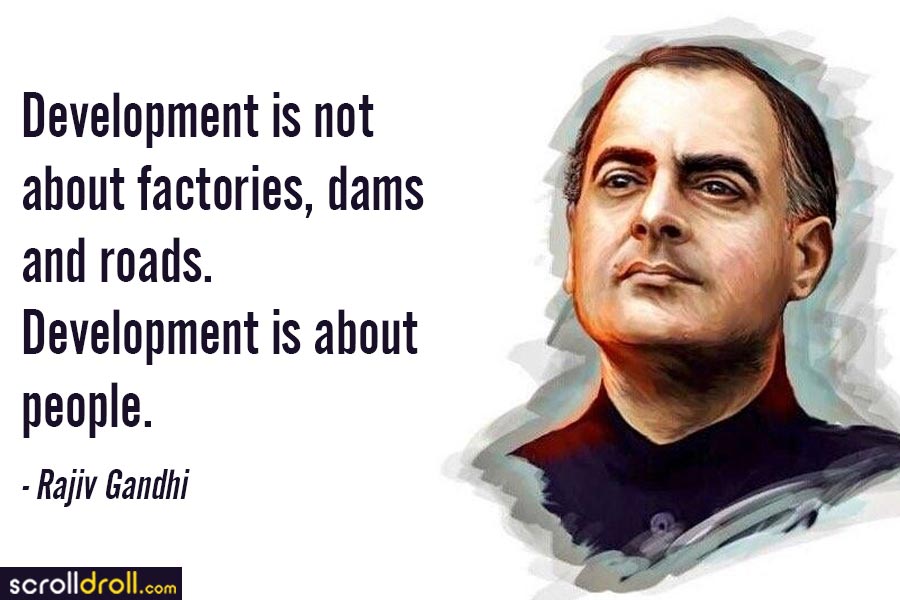 12. Our biggest poverty alleviation programme is to improve the living standard of our farmers. – Rajiv Gandhi 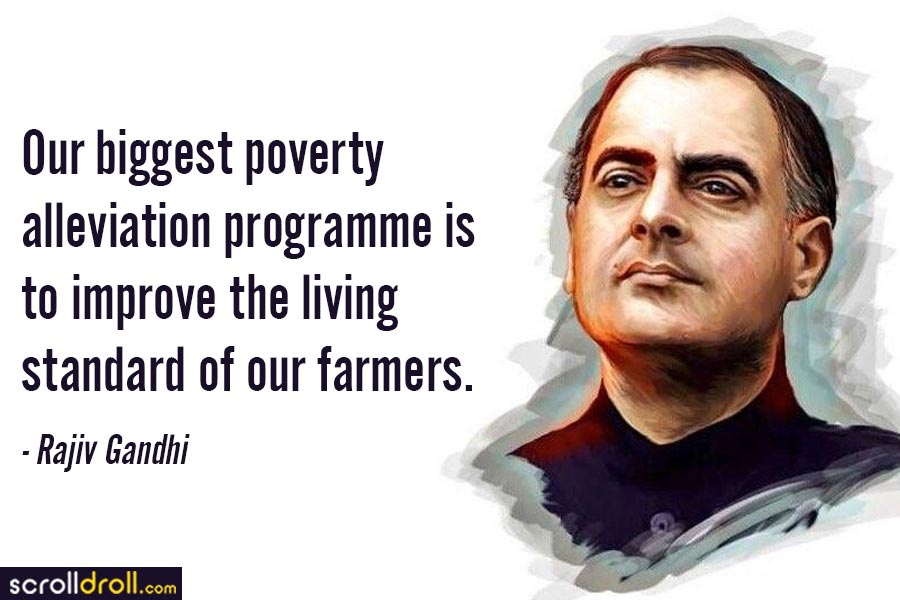 13. We must be clear that secularism as we understand is not only anti-religion or non-religion; it is only the separation of government from religion. – Rajiv Gandhi 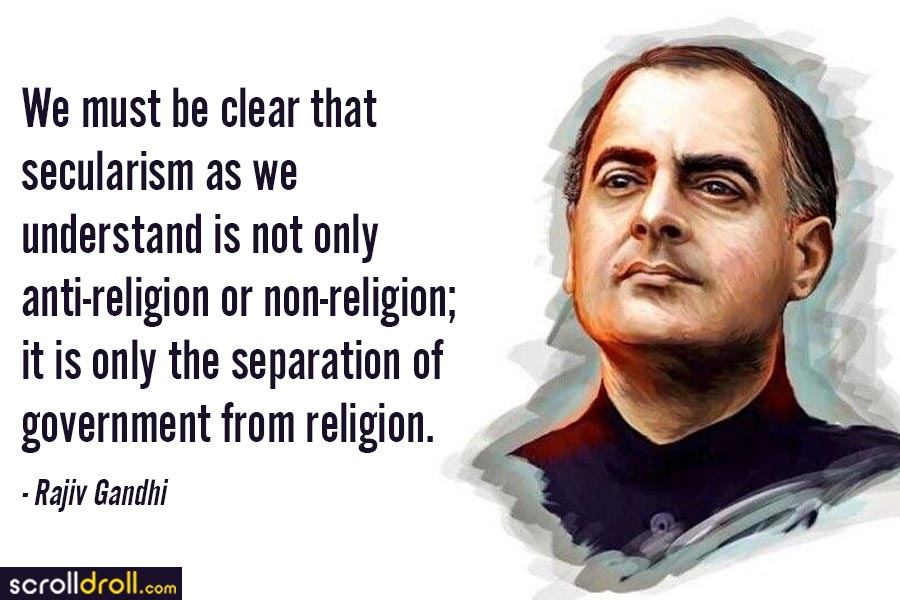 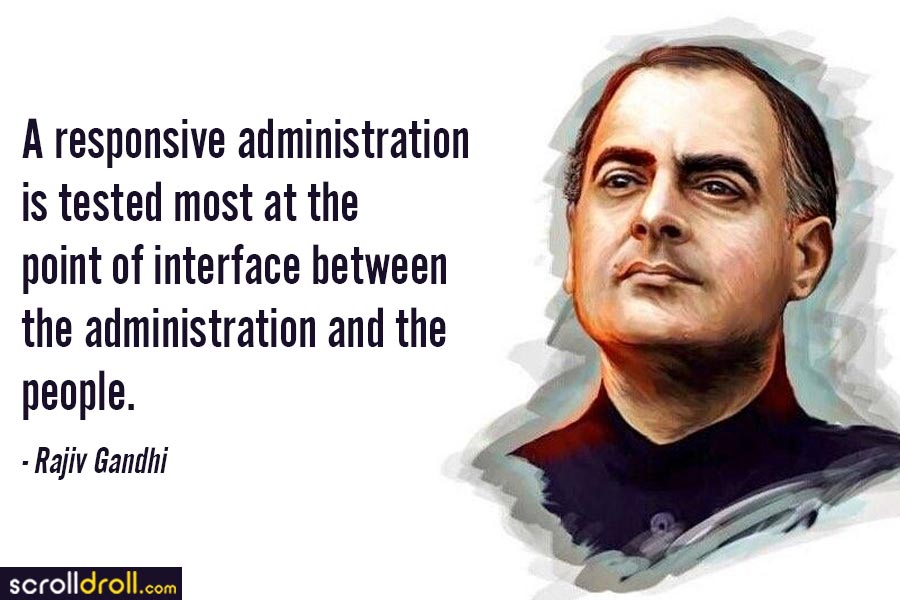 15. India is indivisible. Secularism is the bedrock of our nationhood. It implies more than tolerance. It involves an active effort for harmony. No religion preaches hatred and intolerance. – Rajiv Gandhi 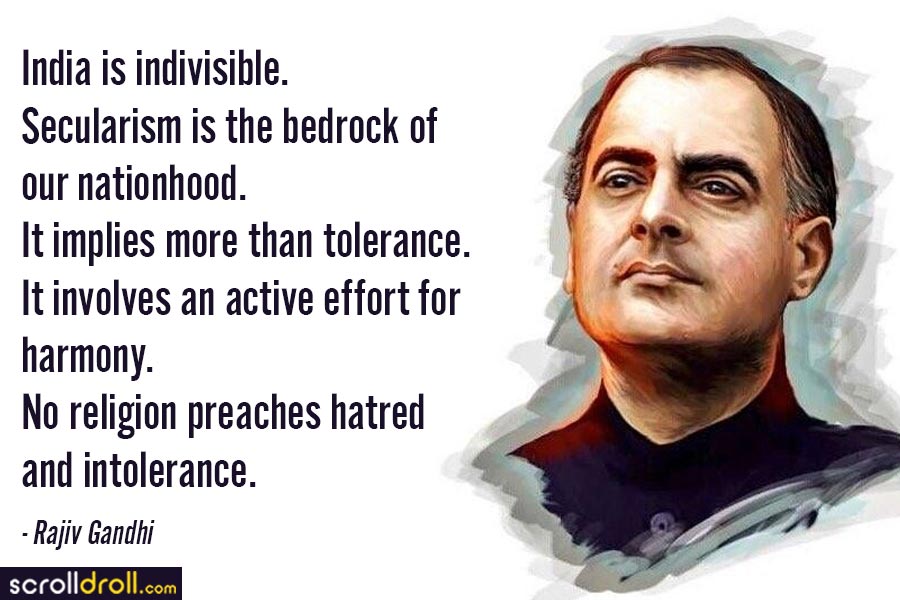 Rajiv Gandhi led Congress to the biggest victory in India’s electoral history in the 1985 General Elections winning 404 out of the 514 contested seats. Despite several revolutionary policies, Rajiv Gandhi’s tenure was also scarred by the memories of anti-Sikh riots, Shah Bano case, the Ayodhya Temple issue and charges of rampant corruption like the Bofors scam. This ultimately led to his electoral defeat in the 1989 Lok Sabha elections.

Rajiv Gandhi was unfortunately assassinated by the members of the LTTE in 1991. He had several years of his political career and statesmanship cut short by his untimely death in a public meeting during the election campaign. Which of these Rajiv Gandhi quotes was the most impactful?