Generations after Generations and centuries after centuries, Ramayana has been the book India’s people, culture and rulers have looked upon to learn virtues to lead their lives and follow ‘Dharma’. The stories, shlokas and Ramayana quotes are a treasure house of knowledge which inspire people to lead a righteous and virtuous life.

We bring you the best Ramayana quotes about life, love, friendship, Dharma and more.

1. “Those who have knowledge of dharma say that Truth is the highest dharma. ”
– Kaikeyi to Dasaratha 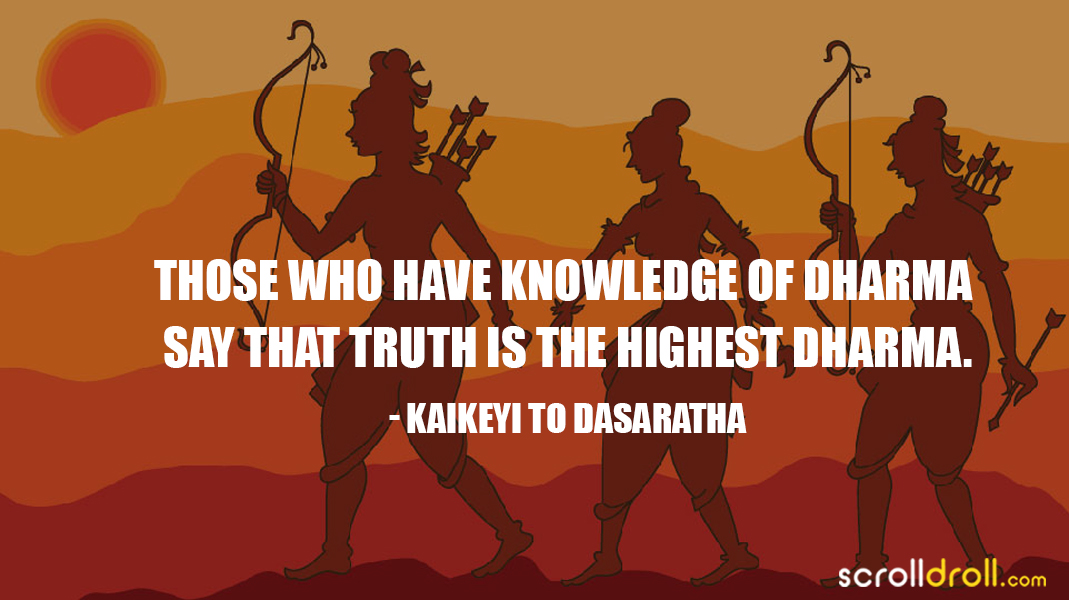 2. “To be happy always is something which is difficult to achieve. That is to say, happiness and sorrow alternate in one’s life and there cannot be uninterrupted happiness alone. ”
– Rama to Kaikeyi 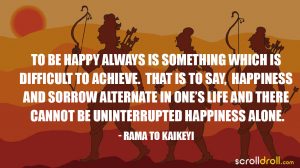 3. “What Rama says once he carries out; there is no looking back.” – Rama to Kaikeyi 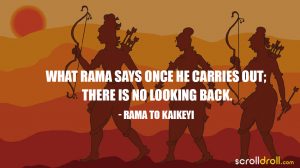 4. “Only the timid and the weak leave things to destiny but the strong AND the self-confident never bank on destiny or luck.” – Lakshmana to Rama 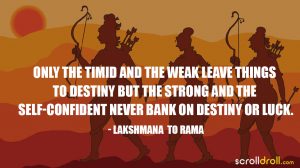 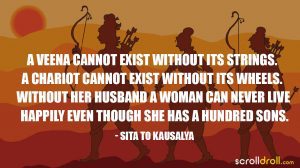 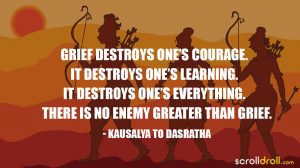 7. “Just as people are afraid of serpents they are afraid of people who utter lies. Truth controls this world and dharma is rooted in truth.” – Rama to Maharshi Jabali 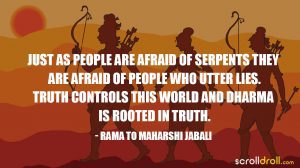 8. “It is difficult for the children to repay the debt of what the mother and the father have done to bring them up.” – Rama to Vasishtha 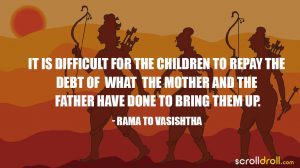 9. “Beauty may leave the moon, Himalayas may become bereft of snow, the ocean may transgress its shores but I will never violate the promise given by my father.” – Rama to Bharata 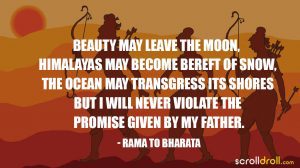 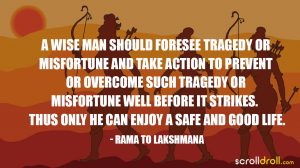 11. “One should lift only such weight as will not exhaust one beyond a limit. One should eat only such food as will easily digest.Who will engage himself in such action as will get him neither dharma nor reputation nor lasting fame and which will only result in physical exhaustion?” – Jatayu to Ravana 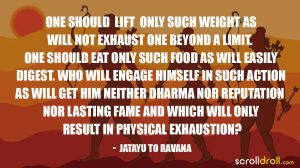 12. “Enthusiasm has great strength. There is no greater strength than enthusiasm. There is nothing which is not attainable in this world for the enthusiastic.” – Lakshmana to Rama 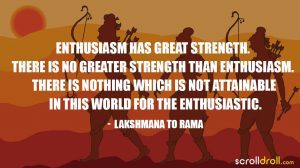 13. “Whether in sorrow or in happiness a friend is always a friend’s support.” – Sugreeva to Rama 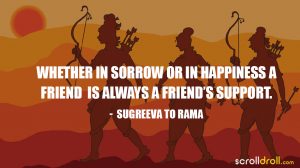 14. “One’s elder brother, father and the teacher who gives knowledge – all these three, treading the path of dharma, are to be considered as one’s father.” – Rama to Bali 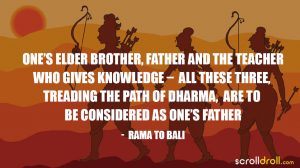 15. “A person gives hope to another who requests for money or other material thing or to one who had helped that person in the past. Having given them hope, if that person disappoints them by not keeping his promise, then he is the worst kind of person in this world.”
– Rama to Lakshmana 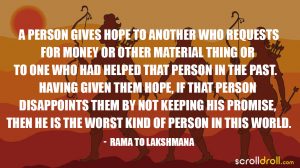 16. “To err is human, there is none who has not erred some time or other.”
– Sugreeva to Lakshmana 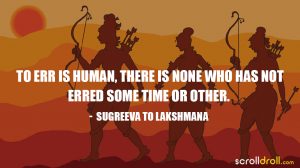 17. “Not getting dejected or depressed, skill in doing one’s job and not losing heart in the face of difficulties – these are the qualities which enable one to achieve one’s goals.”
– Angada to Vanaras 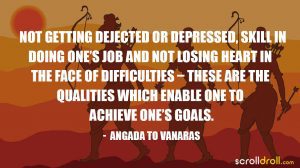 18. “One should not let one’s mind to be overcome by melancholy. Melancholy or moroseness is a very bad thing. It destroys a man just as an angered serpent kills a child.” – Angada to Vanaras 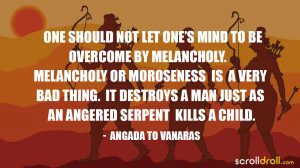 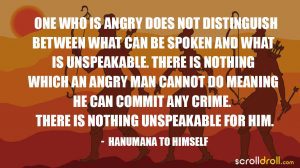 20. “The efforts of one who is unenthusiastic, weak and immersed in sorrow cannot bring out any good and he comes to grief.” – Sugreeva to Rama 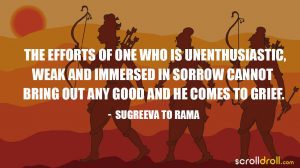 21. “Wise men say that the root of victory is consultation and discussion with learned and wise men.” – Ravana to Ministers 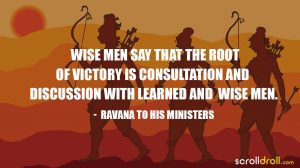 22. “Relatives always rejoice when their relatives are in trouble. Just like drops of water on lotus leaves do not stick to the leaves, in the same way is the friendship with people who lack character.” – Ravana to Vibhishana 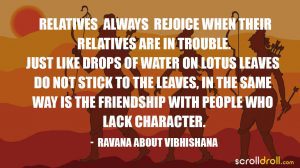 23. “The thundering of clouds which have spent all their water does not produce any rain. But the really valiant do not roar in vain; they show their valor in action also.” – Kumbhakarna to Ravana 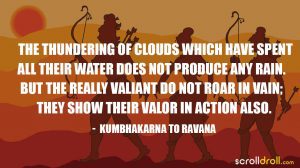 24. “Stealing the wealth of others, coveting another man’s wife and doubting the integrity and character of friends – these three lead to one’s destruction.” – Vibhishana to Indrajit 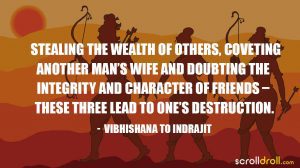 25. “One may have wives and relatives in every country but one cannot have a brother like Lakshmana in every place.” – Rama to Lakshmana 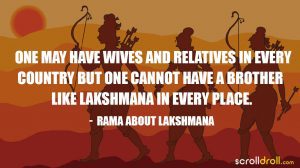 26. “Those who always adhere to truth do not make false promises. Keeping one’s promises is, surely, the mark of one’s greatness.” – Lakshmana to Rama 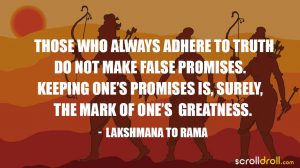 27. “The tears of virtuous women do not fall on the ground in vain, meaning it will destroy those who caused them such anguish of heart causing tears to be shed.”
– Mandodri mourning Ravana’s death 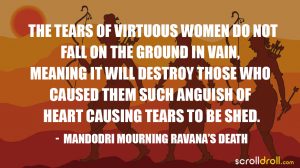 28. Anger is the enemy which takes one’s life. Anger is enemy with the face of a friend. Anger is like a very sharp sword. Anger destroys everything. 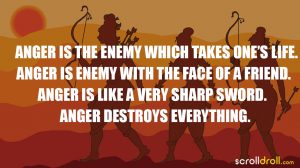 29. Dharma is so called because it sustains or supports society. The people of a country are held together and sustained by Dharma. 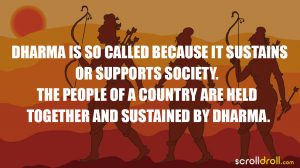 30. “Whatever is one’s food, the same food shall be offered to one’s gods.” – Rama to Bharata 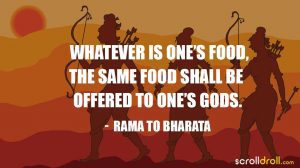 Philosophers, scholars, academicians and story-tellers across the globe speak how this epic is an epitome of human virtues and qualities in its most purest and beautiful form and these Ramayana quotes encapsulate the ancient wisdom of India.

Do you know of any other important Ramayana quotes we have missed out? Do let us know in the comments section!