The history of Modern India would be incomplete without the mention of one man who is often described as the architect of Modern India. We are speaking about the Iron Man Of India – Sardar Vallabhbhai Patel. A nationalist, freedom fighter, and statesman, Sardar Patel is credited to weave the loose coalition of 565 princely states after independence to create an integrated Indian Union as it stands now. A founding father of the Republic of India, Sardar Patel served as the first Home Minister of Independent India guiding it through the rough days of partition and the new dawn of independence.

The words from the Iron Man and Sardar Patel quotes reflect his nationalism, patriotism, and vision of a new India after independence, which works for the equality and liberty of people irrespective of caste, ethnicity, gender, religion or creed.

We bring you the best Sardar Patel quotes…

1. “There is something unique in this soil, which despite many obstacles has always remained the abode of great souls.” 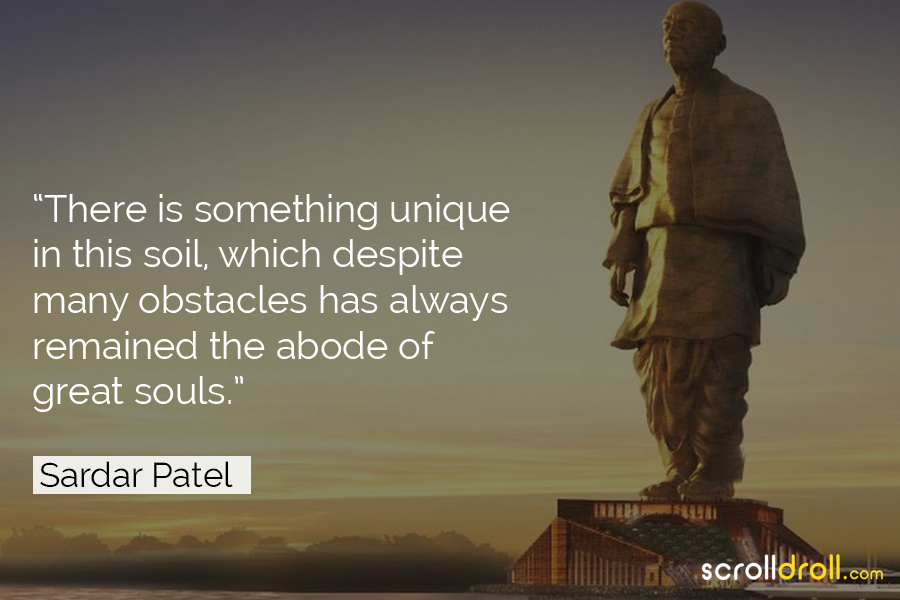 2. “Every citizen of India must remember that he is an Indian and he has every right in this country but with certain duties.” 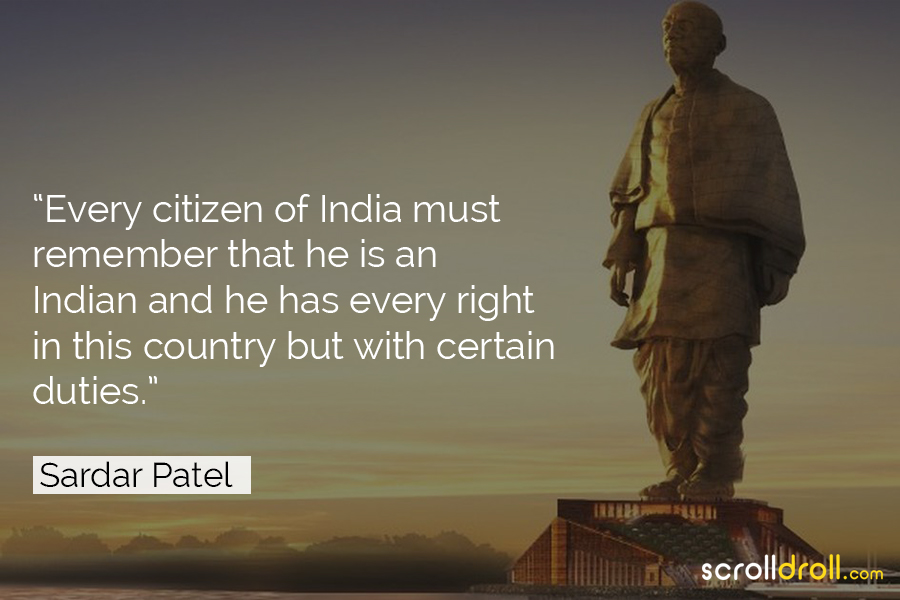 3. “Work is undoubtedly worship but laughter is life. Any one who takes life too seriously must prepare himself for a miserable existence. Anyone who greets joys and sorrows with equal facility can really get the best of life.” 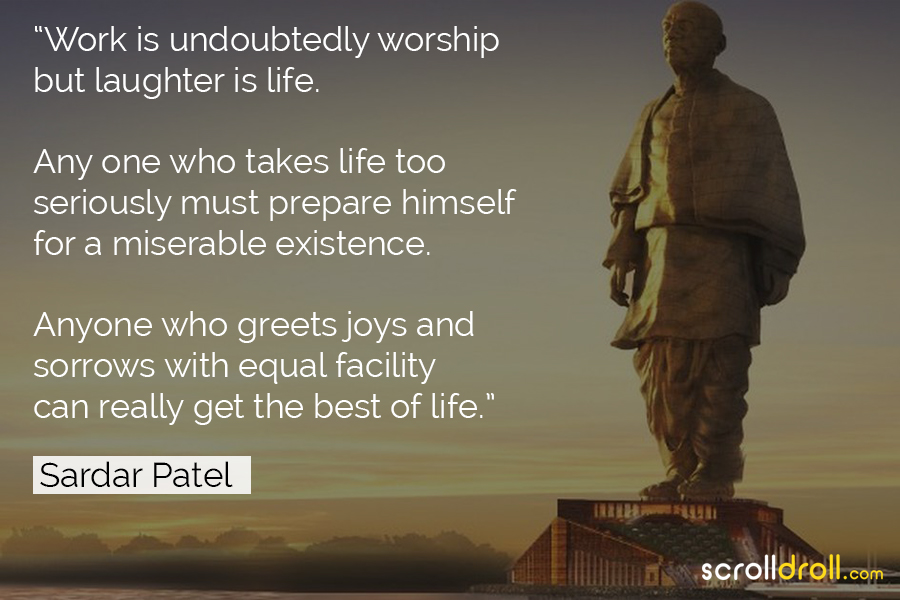 4. “The negligence of a few could easily send a ship to the bottom, but if it has the whole-hearted cooperation of all on board it can be safely brought to port.” 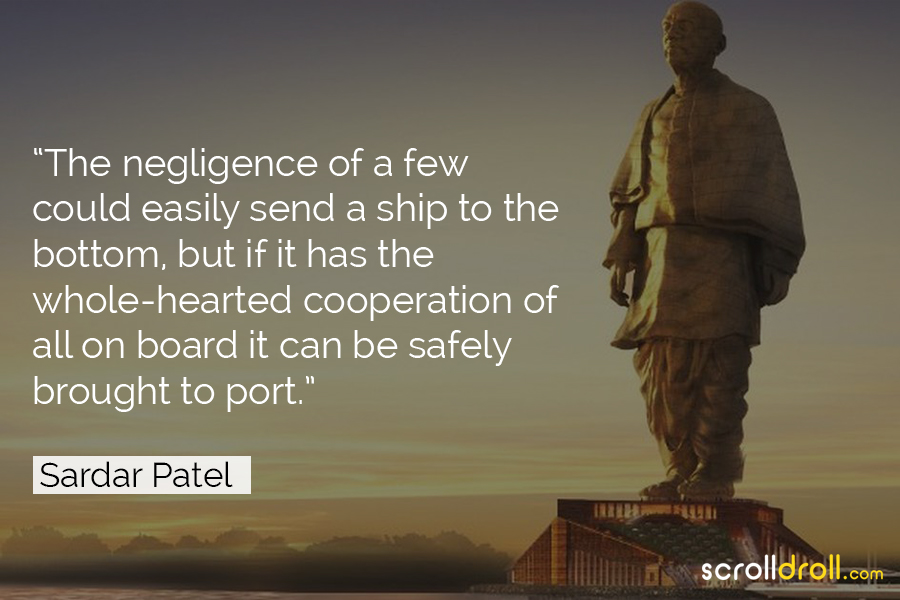 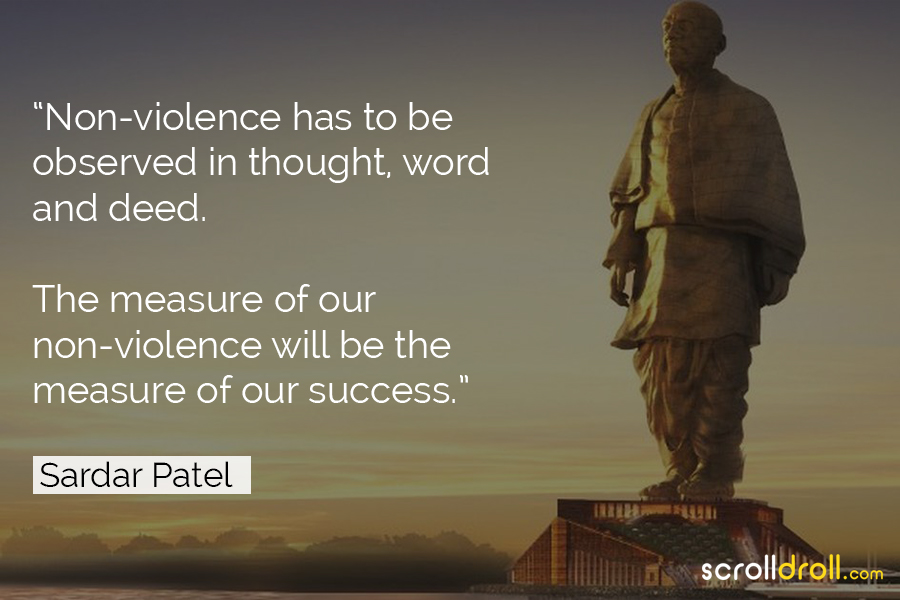 6. “A war based on Satyagraha is always of two kinds. One is the war we wage against injustice, and the other we fight our own weaknesses.” 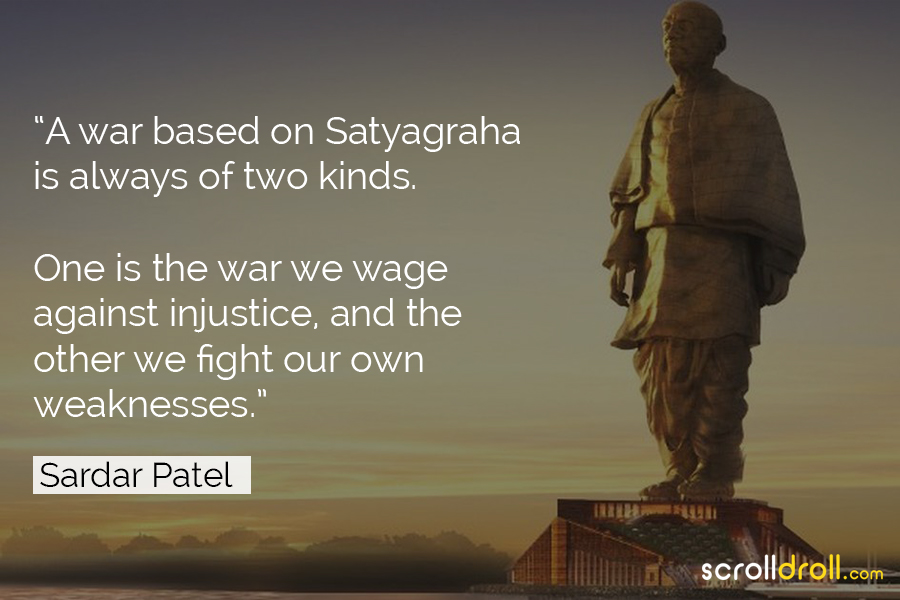 7. “Every Indian should now forget that he is a Rajput, a Sikh or a Jat.” 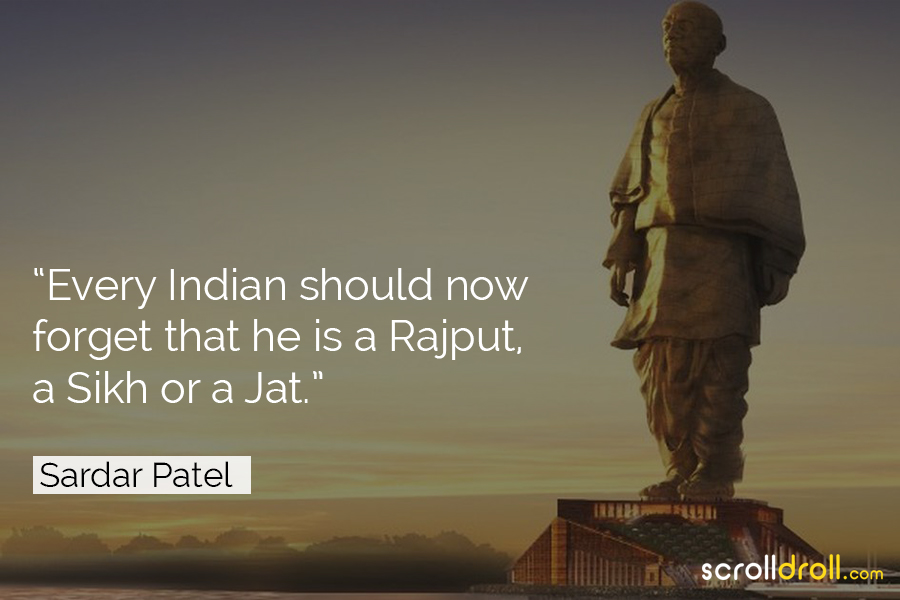 8. “Faith is of no avail in absence of strength. Faith and strength, both are essential to accomplish any great work.” 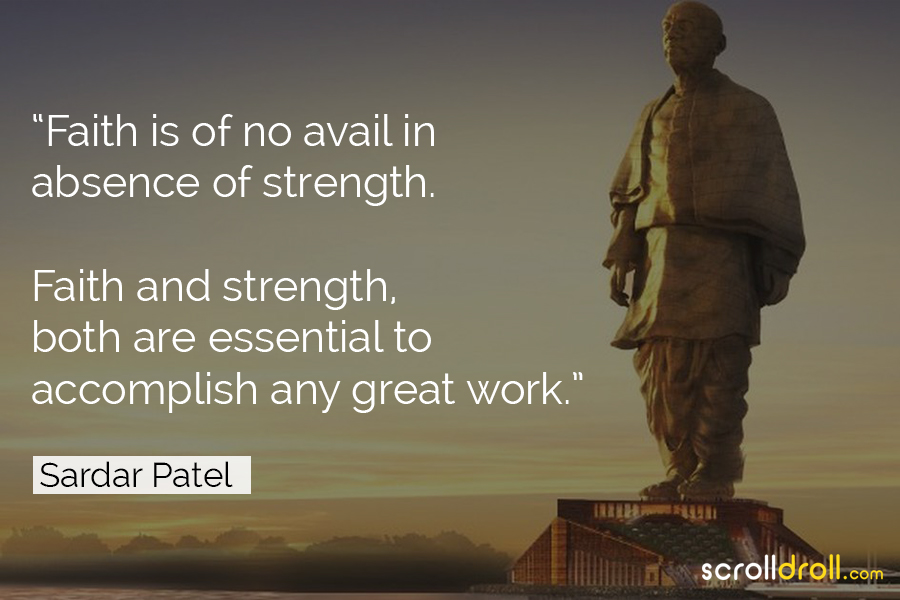 9. “Take to the path of dharma – the path of truth and justice. Don’t misuse your valour. Remain united. March forward in all humility, but fully awake to the situation you face, demanding your rights and firmness.” 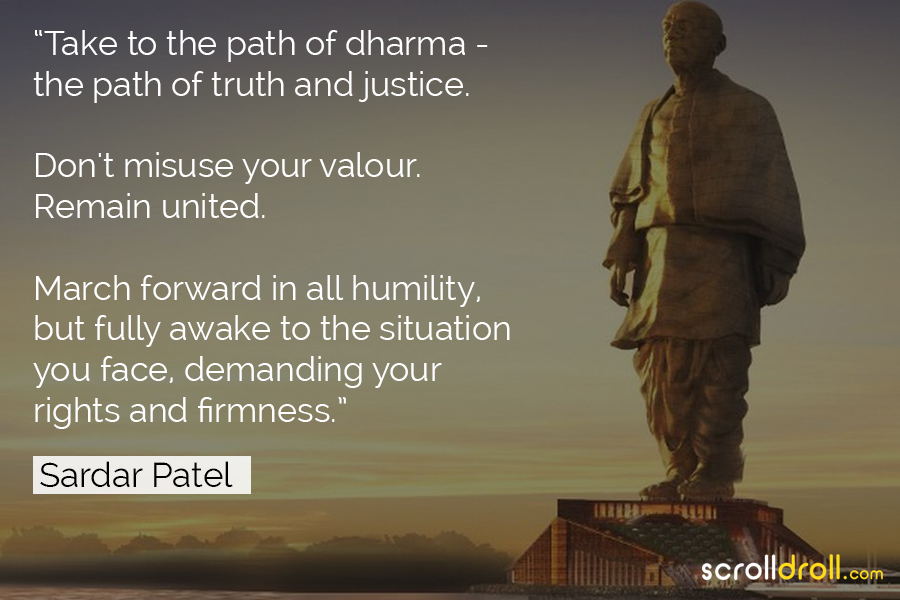 10. “By common endeavor we can raise the country to a new greatness, while a lack of unity will expose us to fresh calamities.” 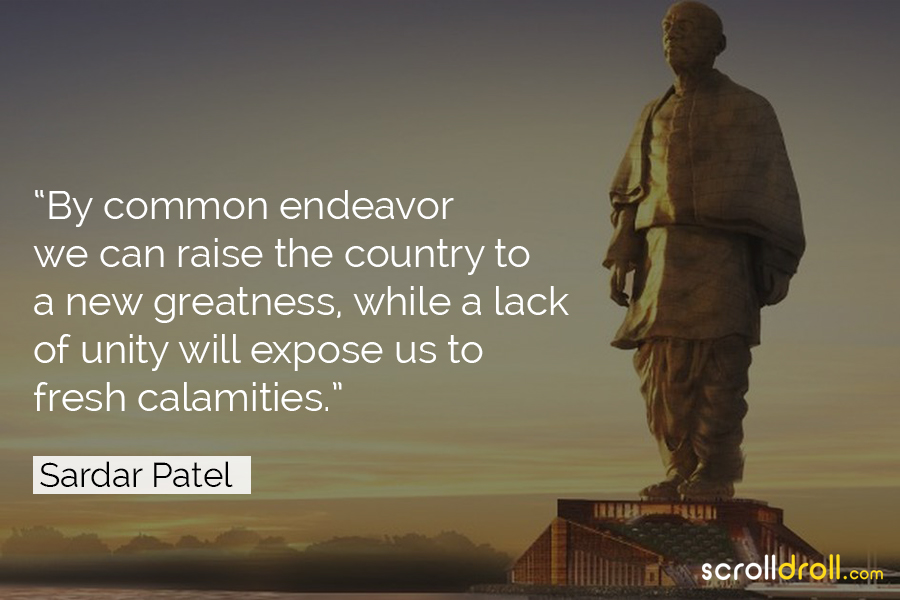 11. “Little pools of water tend to become stagnant and useless, but if they are joined together to form a big lake the atmosphere is cooled and there is universal benefit.” 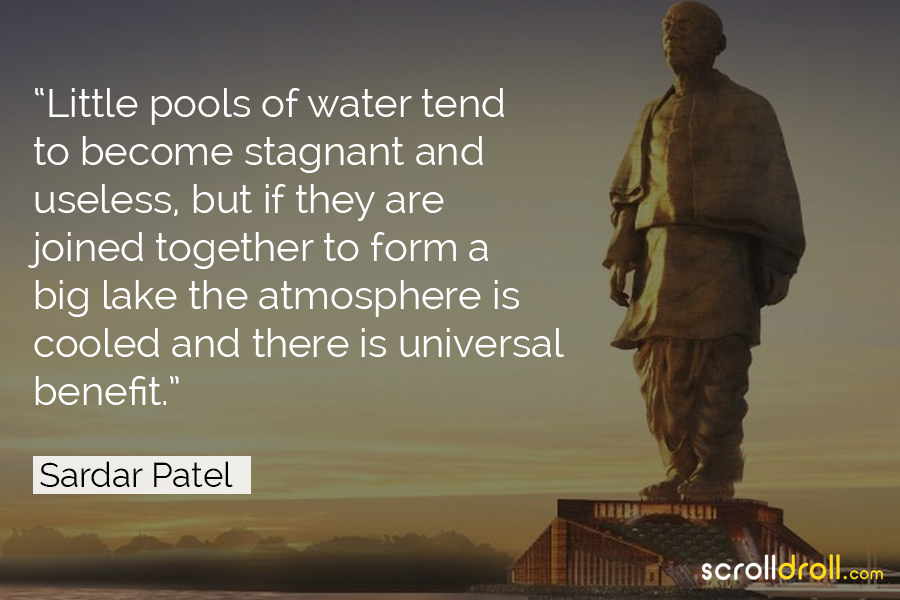 The map of modern India as we see it today wouldn’t have been possible without the pro-activeness, diplomacy, and hard work of Sardar Patel. He has rightly been credited for uniting princely states and independent kingdoms into one strong, integrated and diverse India. We hope these Sardar Patel quotes will continue to inspire us to build and work for a better India.