India is blessed with some of the most beautiful hill stations which offer amazing views and snowfall, mostly in the winters. The Greater and Middle Himalayan ranges are clad in snow for most of the year. India is also home to the Khangchendzonga, Zanskar, and Dhauladhar ranges, and these peaks remain covered in snow all year round. One is actually spoilt for choices when it comes to places they can visit to experience snow, making it hard to pick one. We bring to you 12 amazing places where you can have the best snowfall experiences in India.

Kufri is a quaint hill station near Shimla in Himachal Pradesh. You can experience laid back mountain life and immerse yourself in the snow in the winters. The snowfall usually begins in the month of November and it continues to receive snow till the beginning of March. You can also experience skiing on the slopes in the winter. Kufri is quickly catching up as a holiday destination owing to its seclusion and natural splendour. 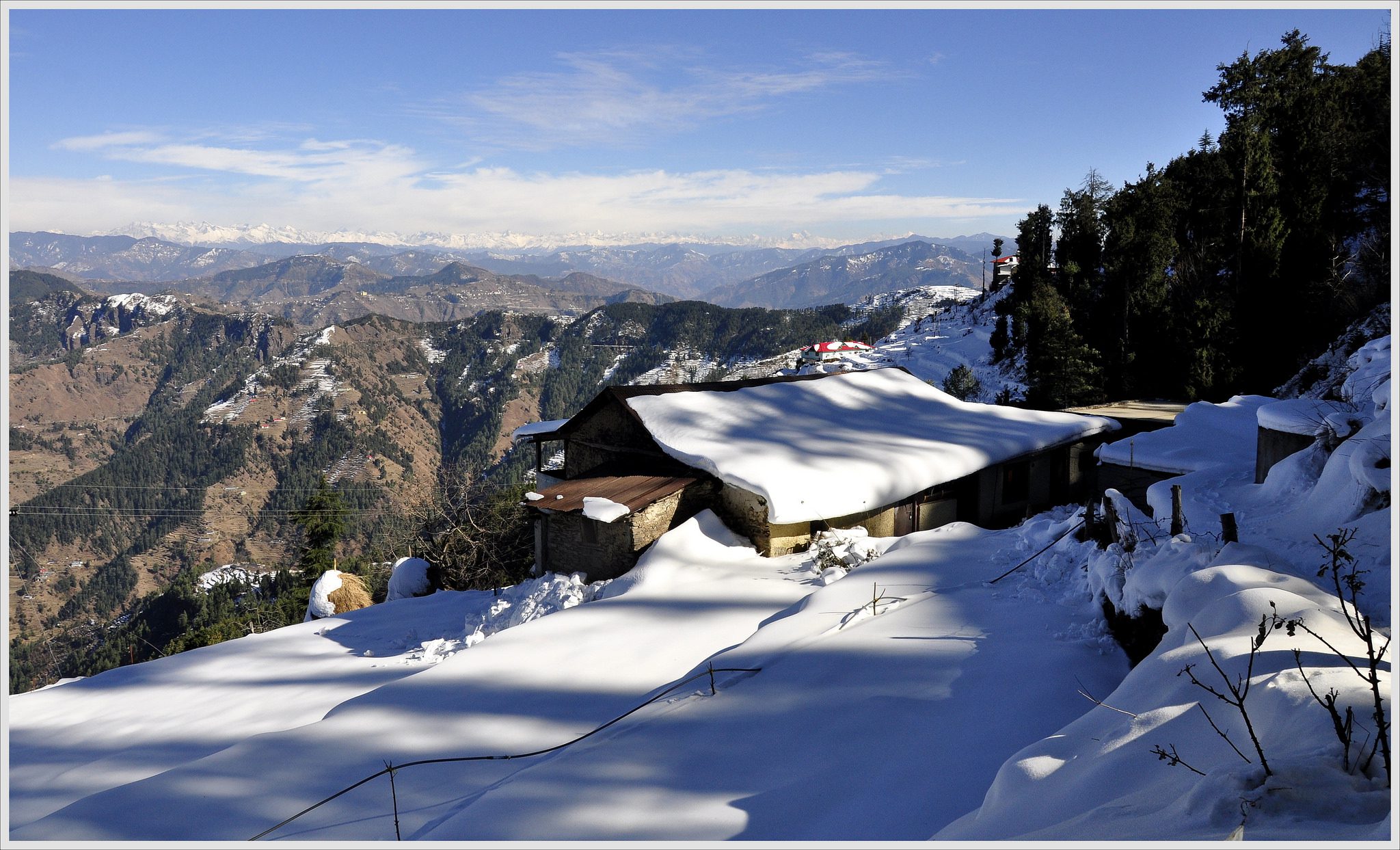 Auli is India’s best ski holiday destination, the place receives better snowfall than most places in the country and the slopes in Auli form beautiful snow tracks with the evergreen deodar trees lining along the slopes. Auli falls in the Chamoli district of Uttarakhand. Head here for a one of a kind ski experience. 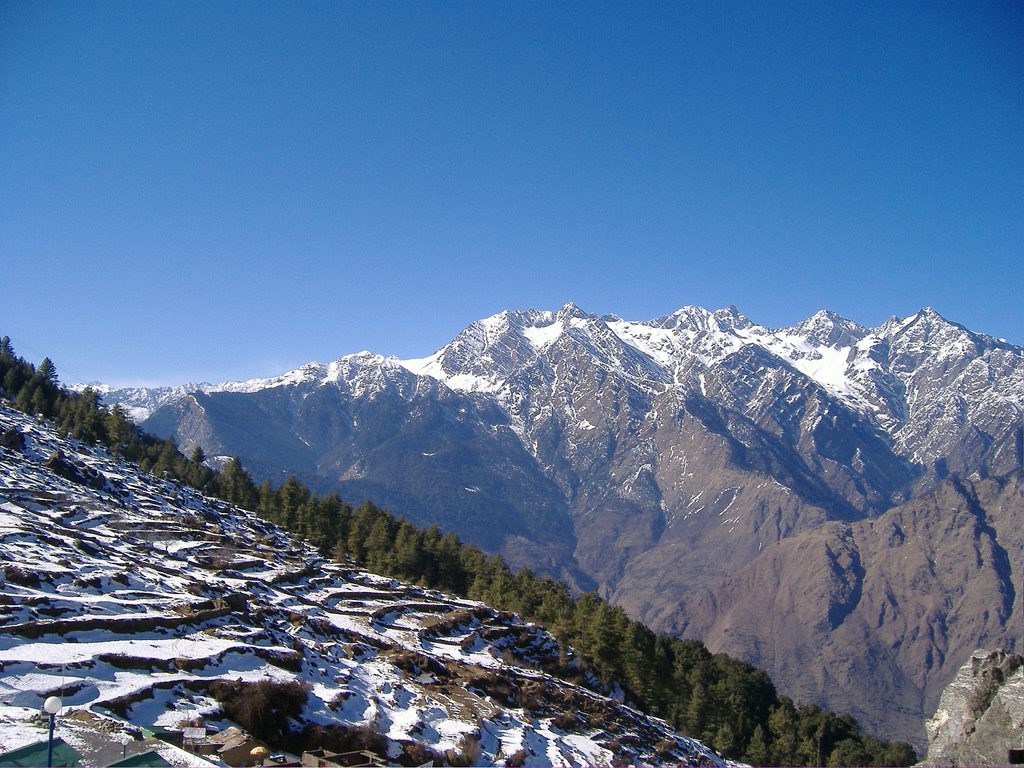 Nestled in Himachal Pradesh and blessed with serene natural scenery and picturesque landscapes, Manali has been the go to hill station for people living in the plains nearby and neighboring states. It has been listed as one of the most beautiful holiday destinations in the country. Manali also houses the gateway to Ladakh, the Rohtang Pass. You can find snow at Rohtang pass almost throughout the year, while snow covers Manali majorly between late November and early April. 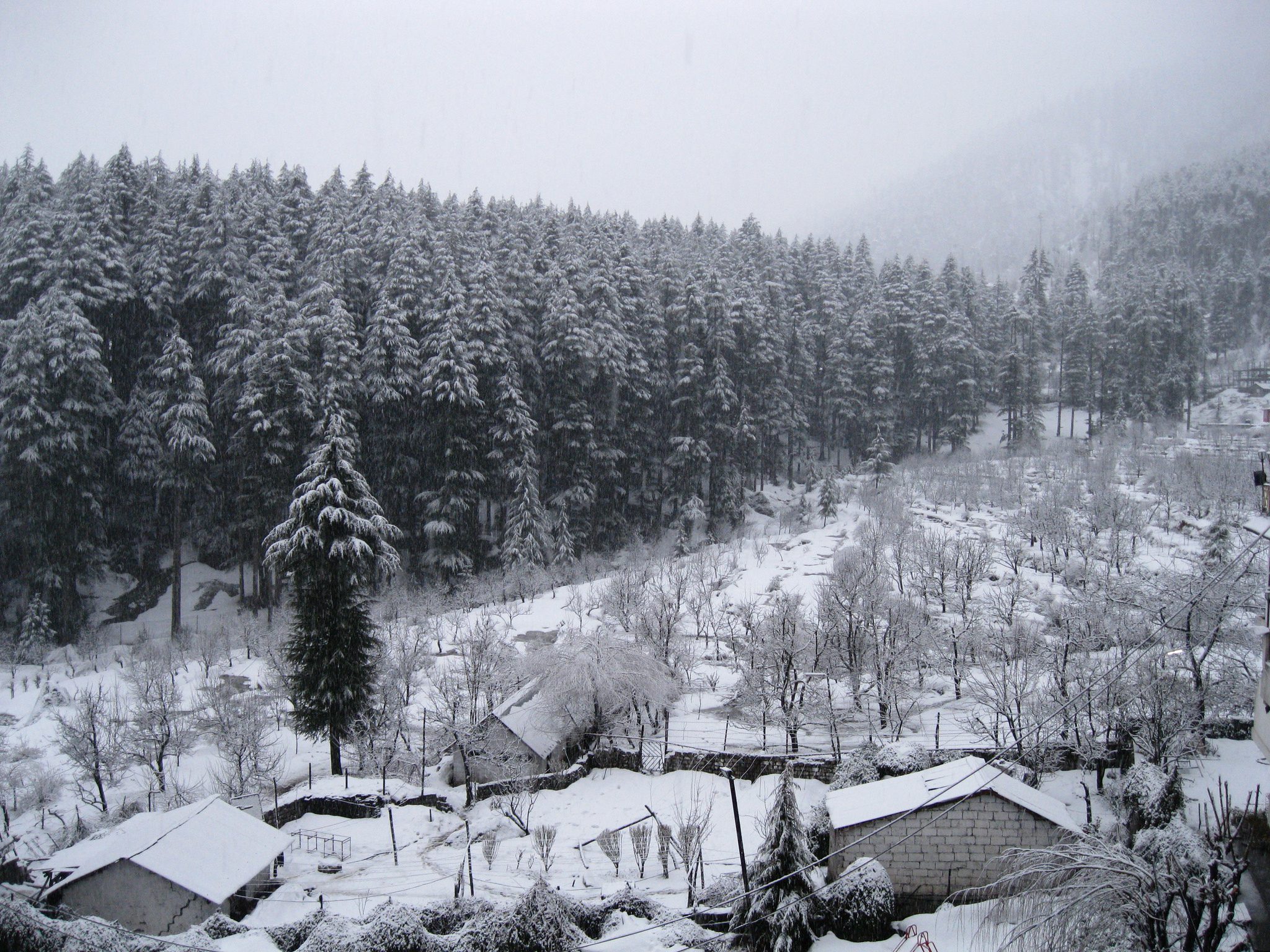 The capital of Paradise of Earth, Jammu and Kashmir, Srinagar receives abundant snowfall. The entire valley is covered in a thick blanket of snow and the Dal Lake freezes almost completely from November to March. When the snow falls in the city, the colourful Mughal gardens and green slopes of the valley turn into a pristine white canvas on which you can paint your winter dreams. 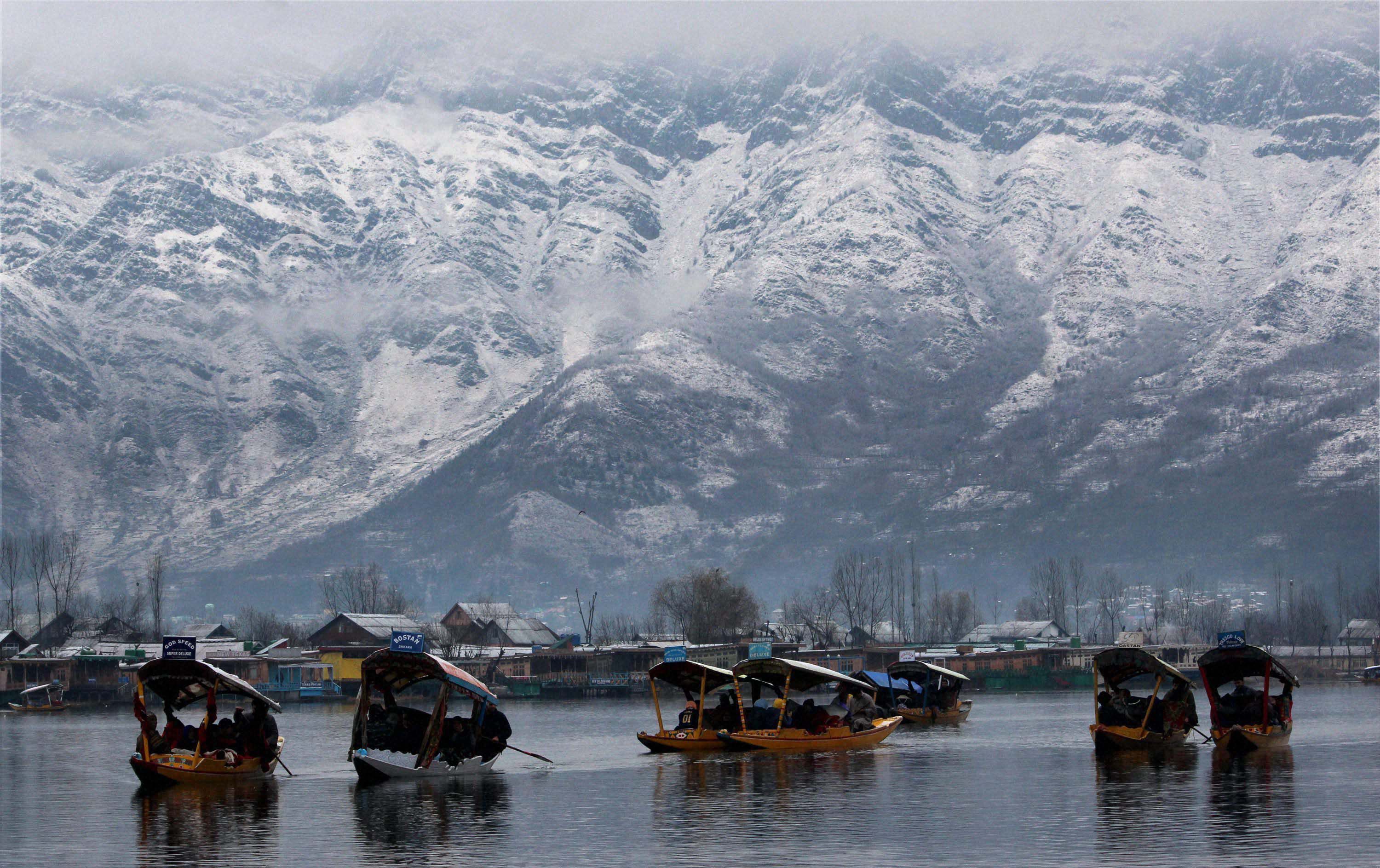 Another set of holiday snowy destinations in Kashmir, Gulmarg and Sonmarg were the favourite destinations for picturising songs in Bollywood movies from yesteryears. These beautiful towns are the hub of tourism in Kashmir and receive abundant snow and appeal to the locals and the tourists alike. 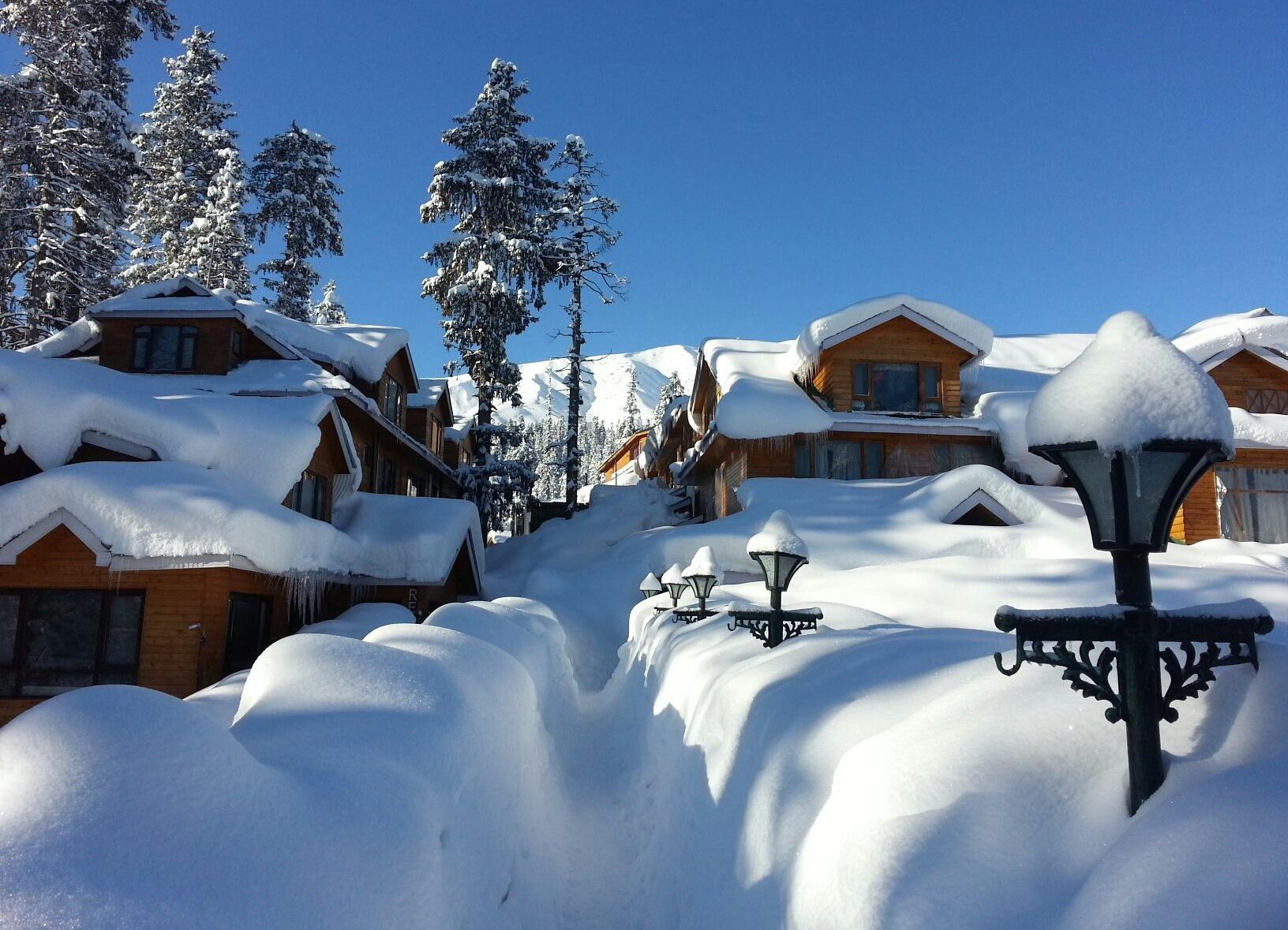 The lush hills of Chamoli in Uttarakhand are blessed with dense forests, thanks to the local residents who actively protested the deforestation activities. The Chipko Movement was born in Chamoli and it brought the place into limelight. The snow adds to the natural beauty of the hill slopes during winter season. The patches of green in the white snow-blanket make it look like a painter having fun with colours on his canvas. 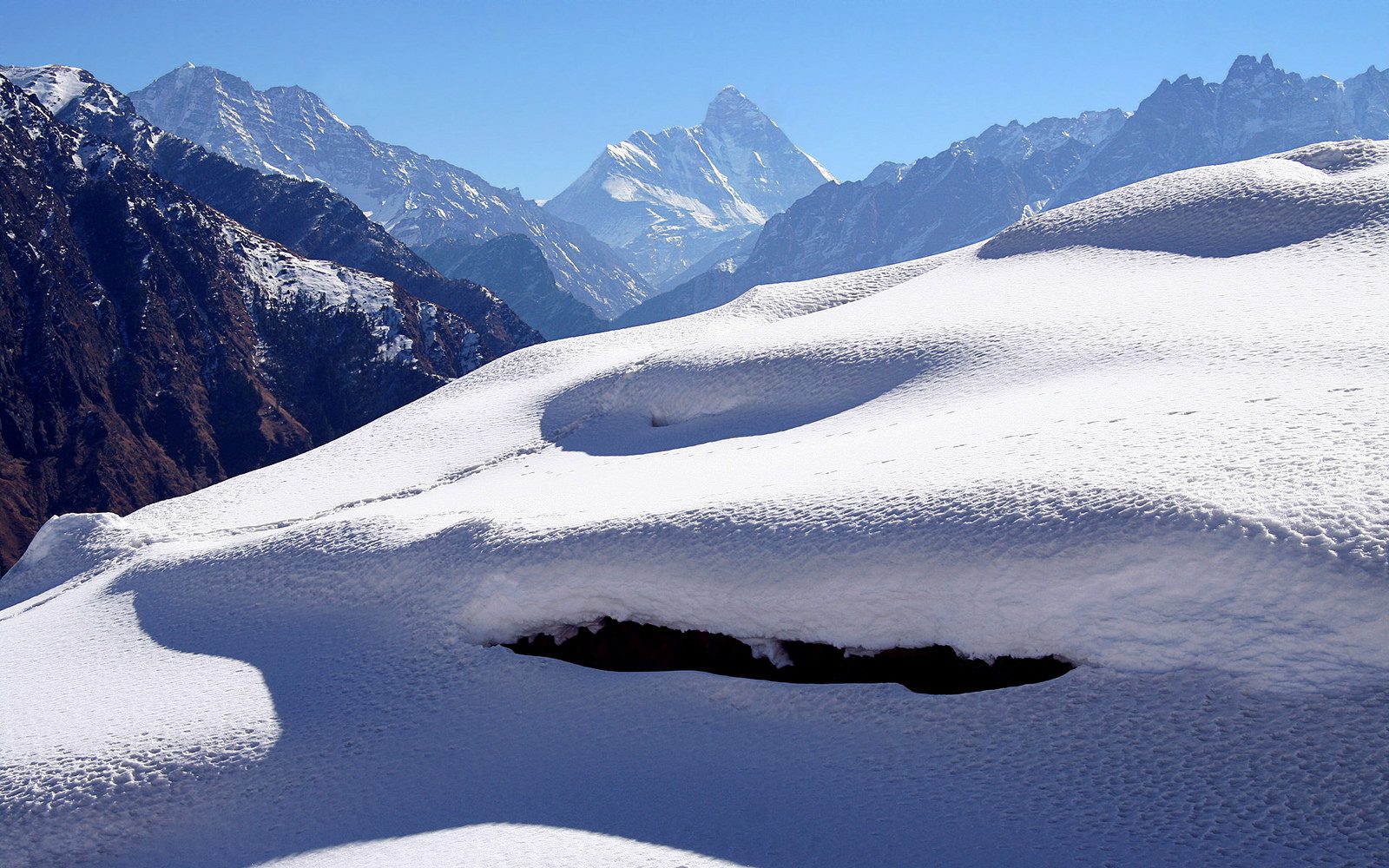 One of the most beloved holiday destinations, Ladakh, has been the favourite spot for innumerable travellers and tourists from around the world. The cold and arid mountains of Zanskar and Himalayan ranges border Ladakh on either sides. The region receives a fairly high amount of snowfall and the Indus  and Zanskar rivers remain partially frozen. There is no particular best time to visit Ladakh, since the place attracts visitors all year long. In the winter months the place is relatively less crowded and snow blankets the entire region. 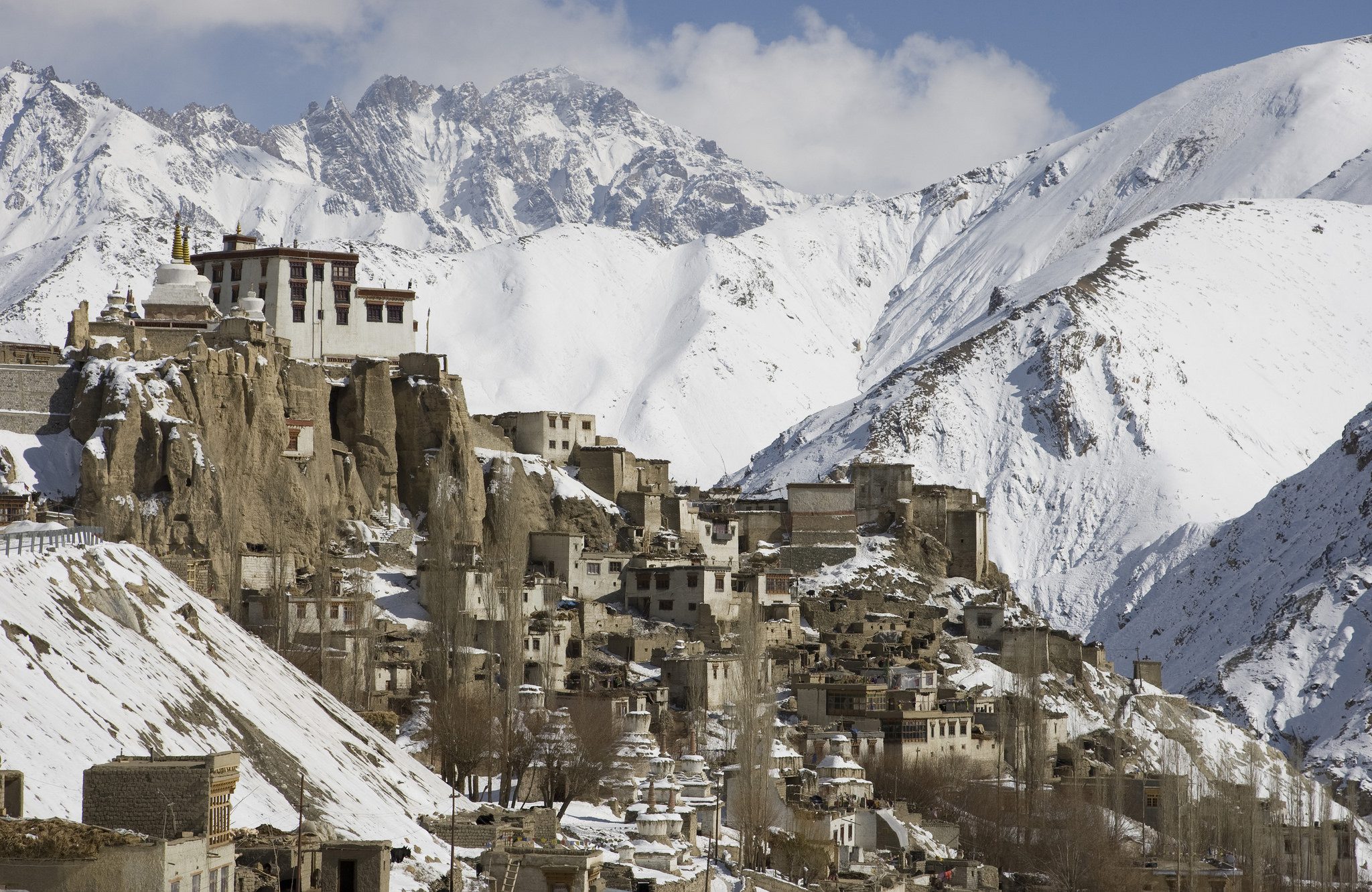 The calm and quiet hill station of Dhanaulti is perched at a distance of 24 km from the town of Mussoorie in Uttarakhand. The town gets a good amount of snowfall in the winters and people flock to Dhanaulti, due to its proximity to Delhi and other nearby cities, to experience snowfall. The town has been gaining popularity as a weekend getaway and the snowfall in Dhanaulti adds a winter wonderland like charm to its natural setting. 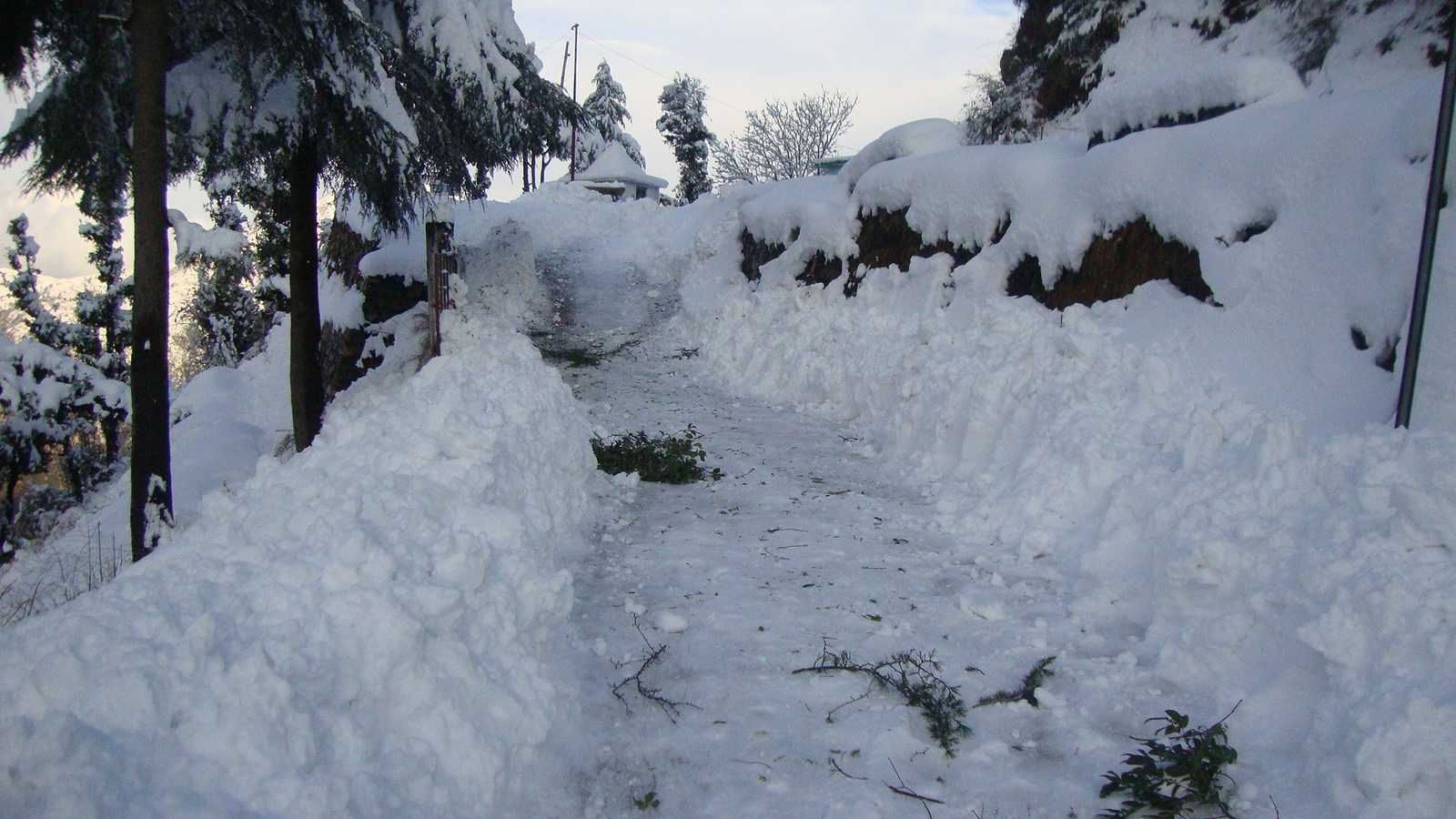 The most preferred weekend getaway for all the Rasta lovers, the Parvati Valley is one the most serene and unblemished places in the entire state of Himachal Pradesh. The valley boasts great views of the river Parvati in the backdrop of Himalayan splendor. Kasol – the hub of all tourists in Parvati Valley, Kheerganga – every trekkers paradise, and Tosh – the lazy travellers haven, are the most prominent destinations in the Valley where you can enjoy snowfall in the winter months. 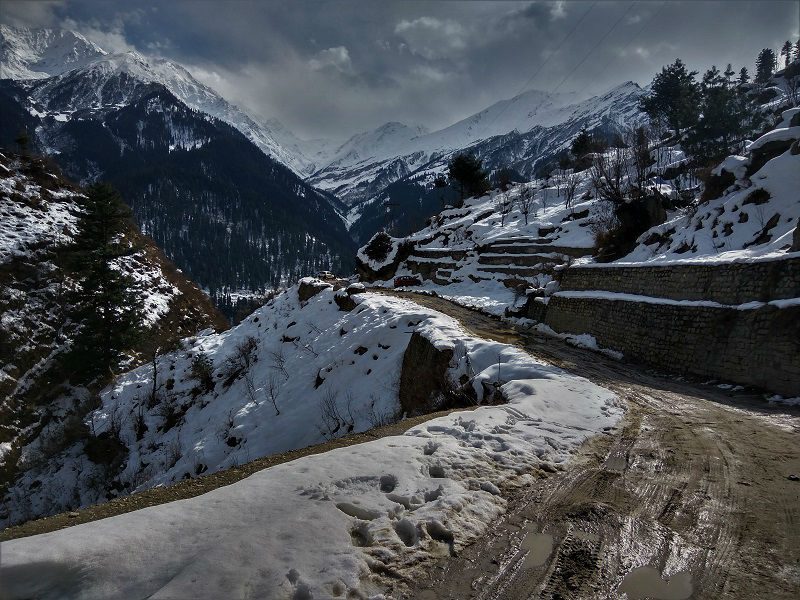 This beautiful valley of flowers is nestled in the North district of the Himalayan state of Sikkim. The natural landscape of the valley resembles the Swiss Alps with green slopes, snow capped peaks and colourful flower beds at the center of the valley. Snow covers most of the orchids and rhododendron shrubs in the winters, and the valley is one of the most perfect places to experience snowfall at. 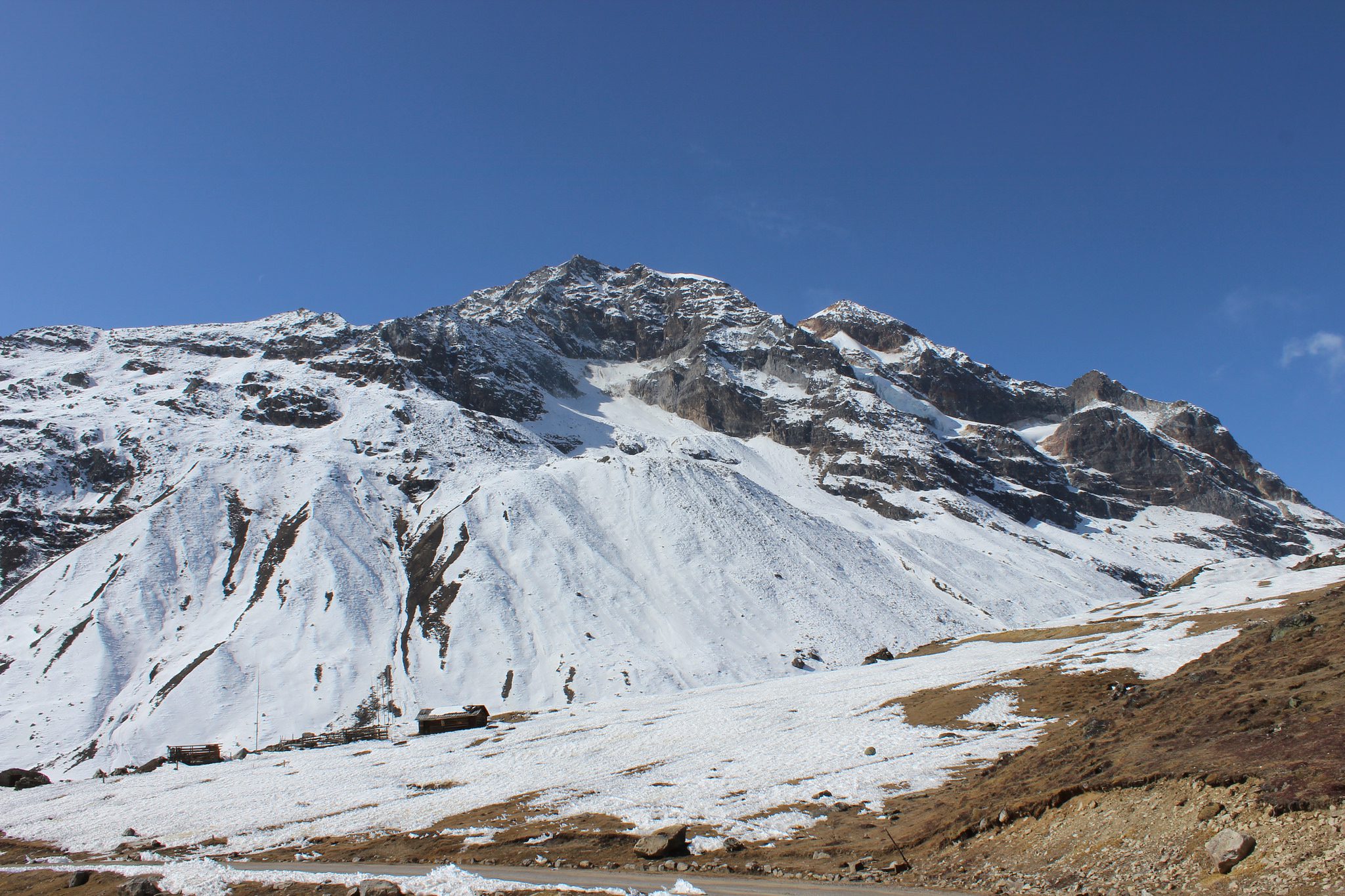 Chopta is the base camp for the trek to Tungnath, and this pristine town is an untouched and unspoiled natural destination perched in the lap of the Himalayas in the state of Uttarakhand. It offers spectacular views of Trishul, Nanda Devi and Chaukhamba peaks, and in the winters (November – March) the town receives fairly heavy snowfall. Chopta is catching up in popularity a holiday destination and more and more people are visiting this place every year. 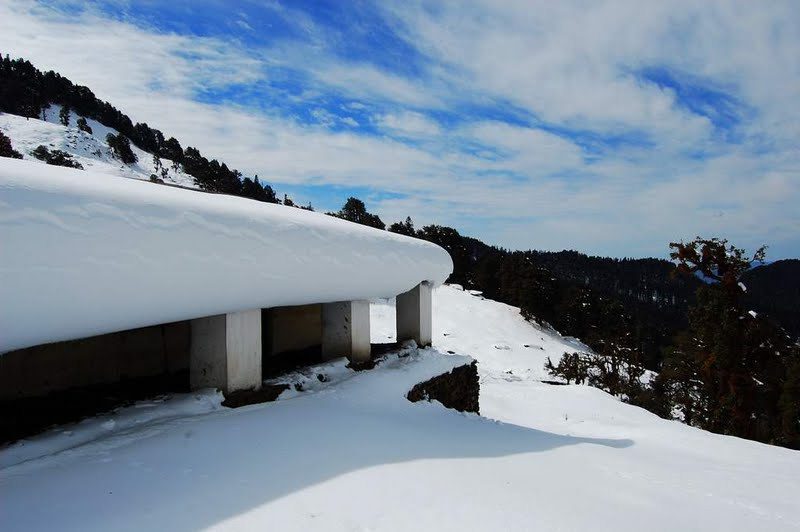 The town has been popular since the mid 20th Century as a holiday destination, Dalhousie houses fine resorts and hotels for tourists and offers stunning views of the Himalayas. Snowfall in Dalhousie is very popular and people from nearby cities rush to the place in the winters to enjoy the snow. 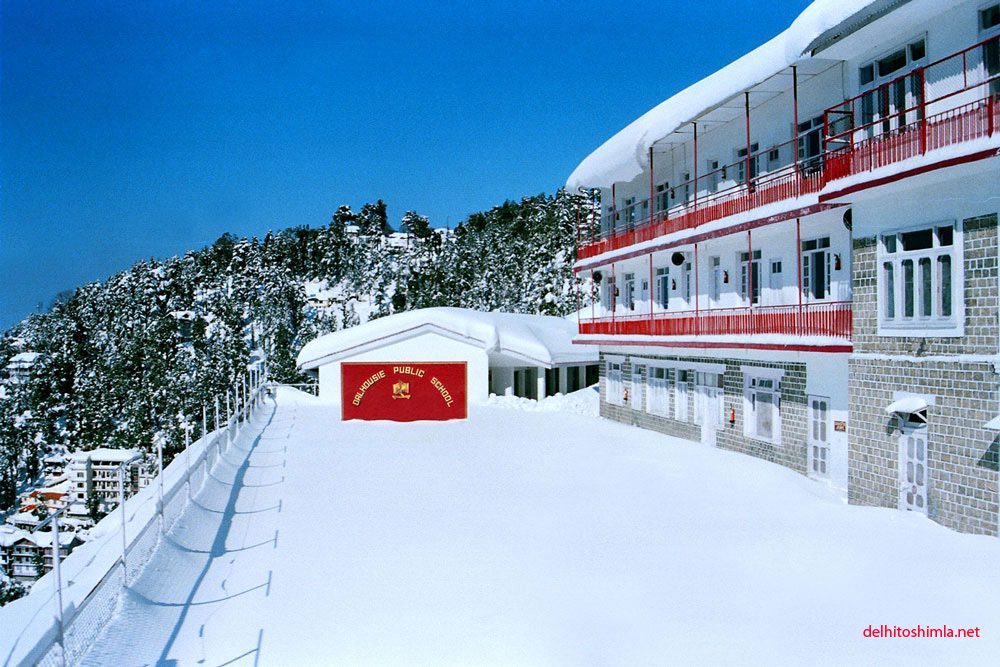 We hope this list helps you zero in on your next snowy escape. Which hill station or valley will you visit next? Let us know in the comments below!