While tensions between India and China have been rife of late, it isn’t exactly new; the two countries have been at odds for decades now. After the Indo-China (or Sino-Indian) war of 1961, things have been frigid between India and China. As things continue to remain free of peace, it brings to fore the forgotten story of an Indian martyr from the 60s who has a shrine to his name in the Himalayas at Nathu La. We bring you the story of Baba Harbhajan Singh, the hero of Nathu La, who continues to help Indian army even after his death.

Also read: The Mathematician From Patna Who Challenged Einstein

Now, onto the story of Baba Harbhajan Singh: 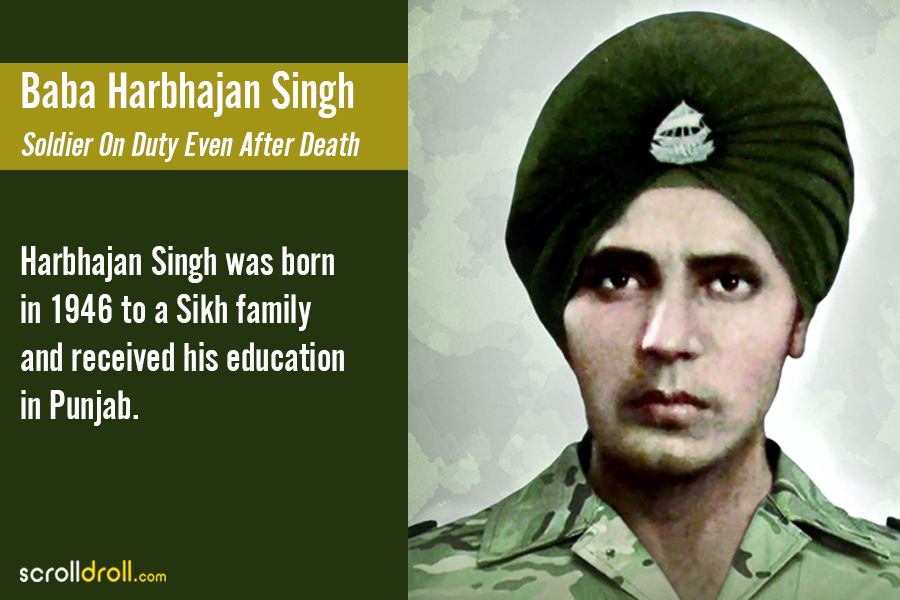 Harbhajan Singh was born on 30th August 1946 into a Sikh family in a village in Pakistan. His family moved to Punjab after the partition, and he received his education at DAV Public School, Patti, Punjab. 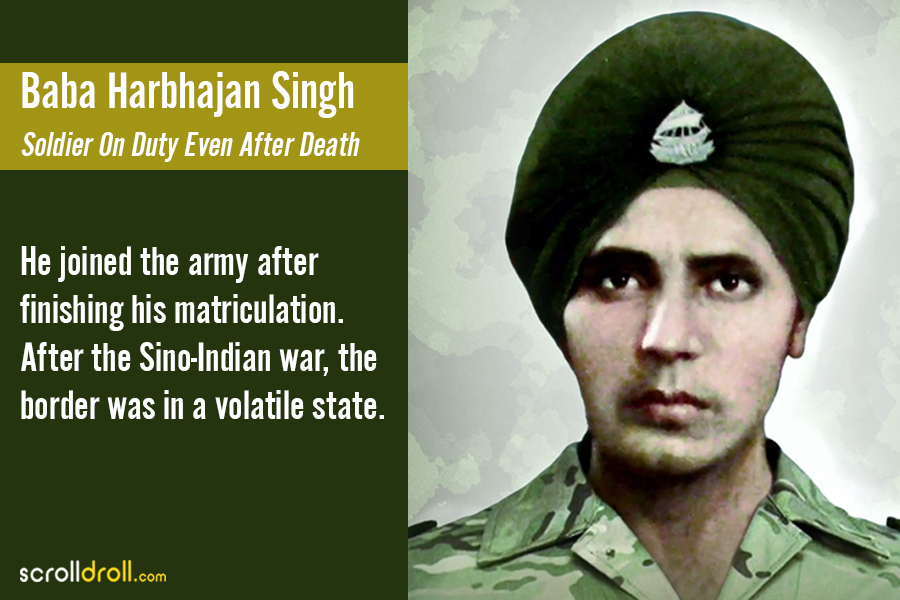 After finishing his matriculation, he enlisted to join the Indian Army. It is noteworthy that he joined the army during especially tumultuous times. After the Sino-Indian war, the border had become supremely volatile. 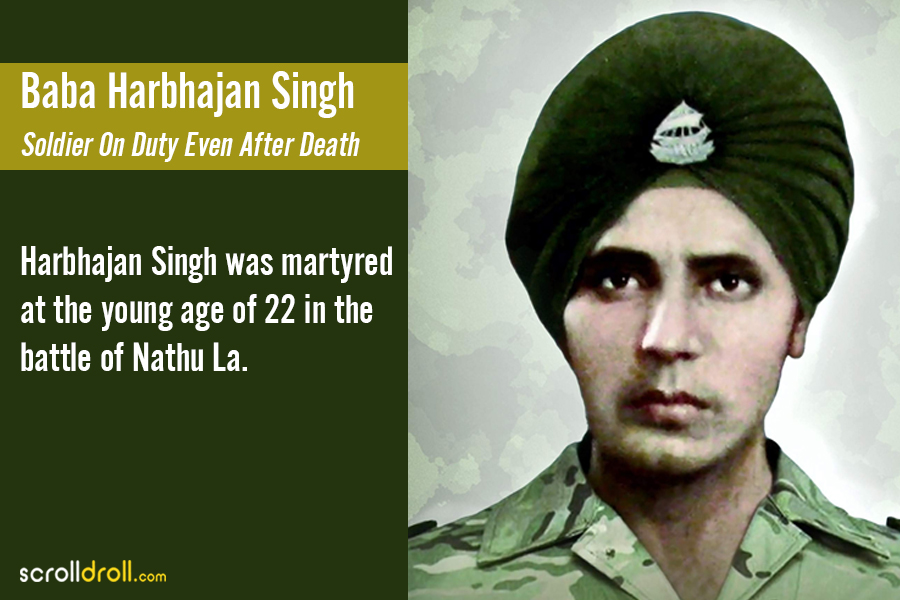 At the young age of 22, Harbhajan Singh lost his life during a battle at Nathu La. However, his body couldn’t recovered until 3 more days. 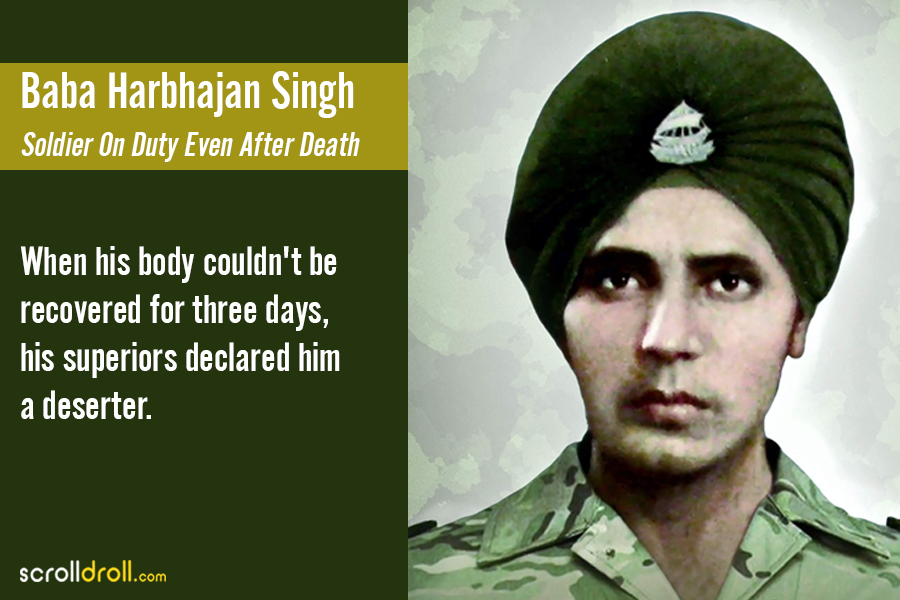 When the army failed to find Harbhajan’s body, his superiors assumed that he had left the battle mid-way, and had deserted the army. 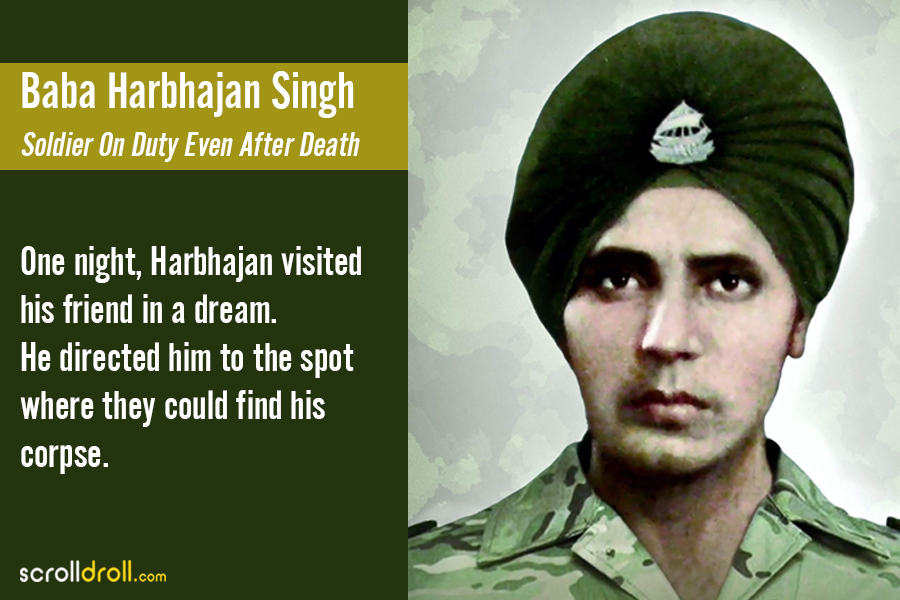 However, one night, Harbhajan visited one of his friends in his dream. He told his friend where they could find his body. And true to his words, his body was retrieved from the very spot he had told his friend to look at.

Harbhajan was cremated soon after, and received full military honors. 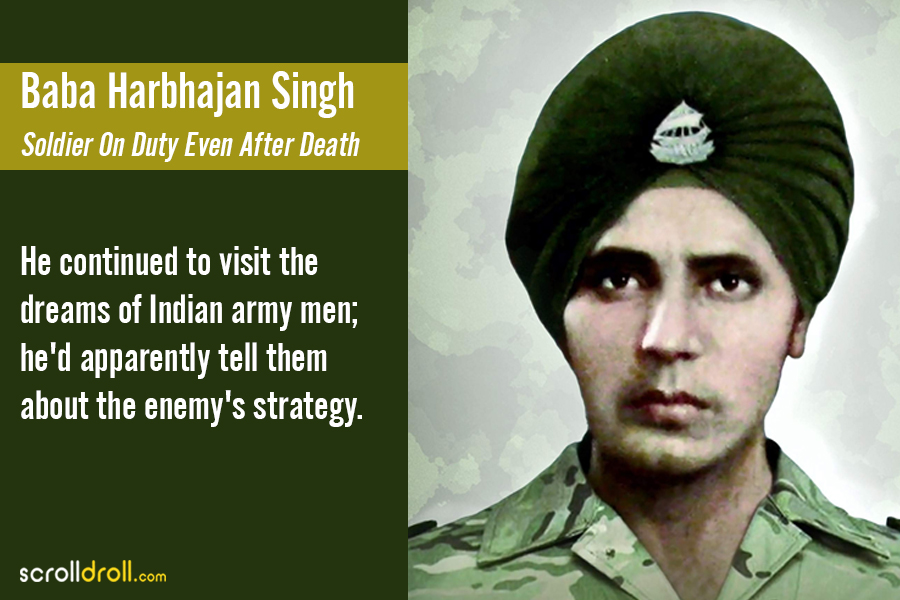 However, this didn’t stop Harbhajan’s spirit from frequently visiting the dreams of the men in Indian army. Apparently, he’d tell the army men about intel on the enemy’s strategy in their dreams. Whenever a soldier on night duty would be on the verge of dozing off, he’d feel as if he was slapped by Harbhajan’s spirit. 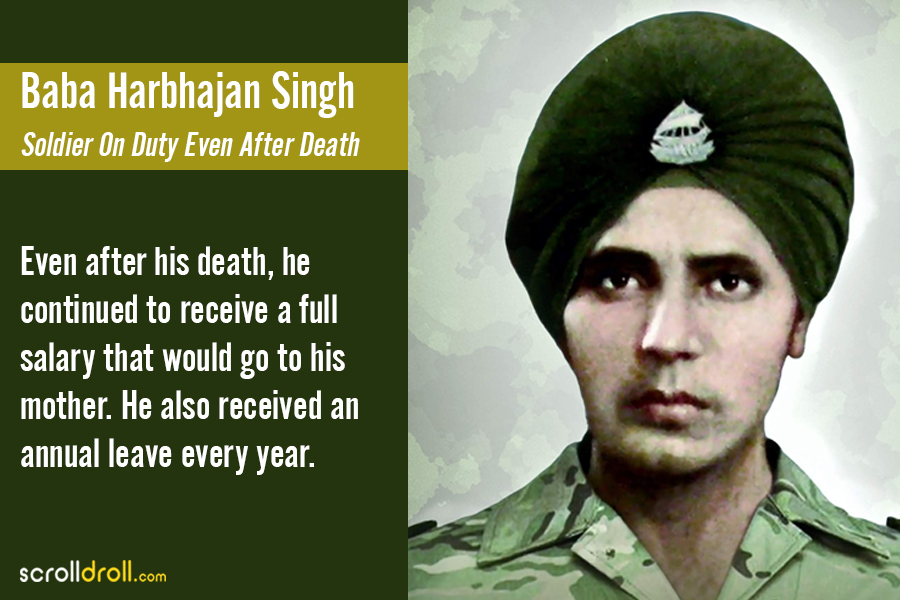 Because of his support to the army even after his death, Harbhajan continued to receive a monthly salary that would reach his mother. Not just that, he even got an annual leave every year. His luggage would be packed for the leave, chaperoned by three army men, who’d drop his luggage at his home every year. 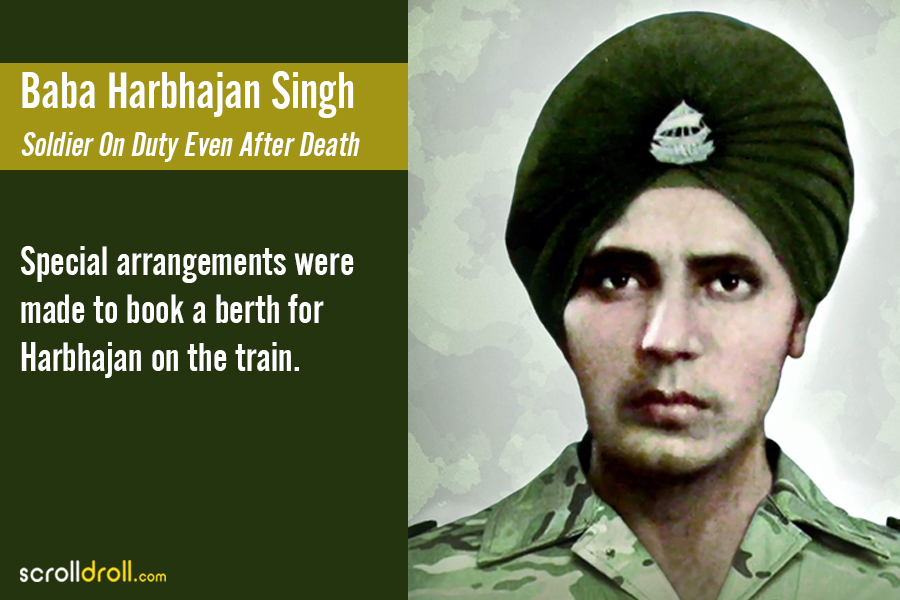 A berth for Harbhajan would be booked in the train. Usually, vacant seats are given to those on the waiting list, but for Harbhajan, special arrangements were made. 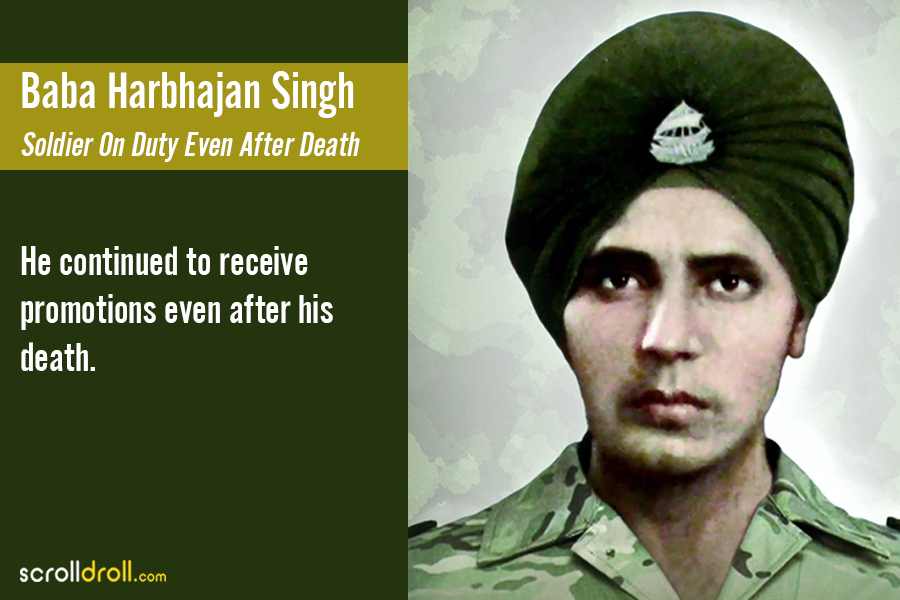 Even after his death, Harbhajan continued to receive promotions. He started off as a sepoy, but was a captain by the time he retired. 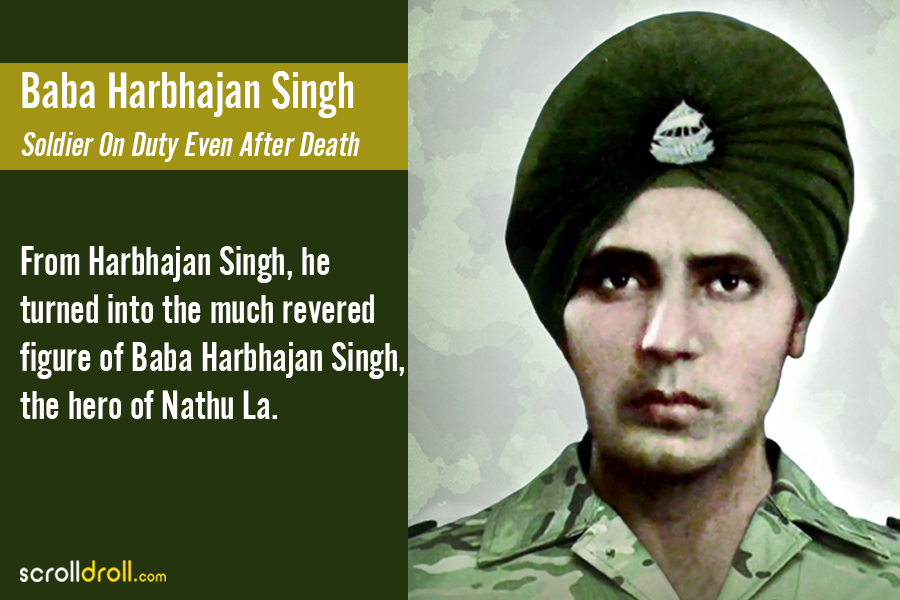 With time, people started to refer to him as Baba Harbhajan Singh – Baba, meaning saint. He is now called the hero of Nathu La. 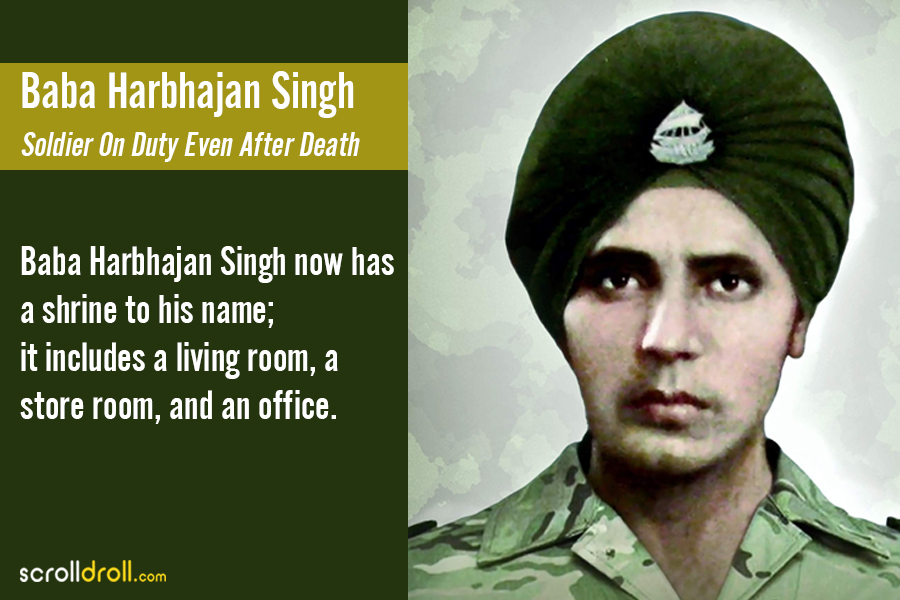 People’s adulation for Baba Harbhajan Singh has been overwhelming and endless. He now has a shrine to his name that houses a living room, a store room, and an office. Army men have reported that sometimes they’d notice creases on the bedsheet, implying Baba Harbhajan’s presence.

Did you like learning the story of Baba Harbhajan Singh? Keep checking our website to read about forgotten stories of Indian people you should know about.

14 Quotes on Happiness To Remember During Dark Times

The Real Story Behind KGF: The Life and Adventures of Rowdy Thangam