During our childhoods, we were made to believe that India as a country welcomed people from all faiths to live harmoniously together – that people speaking different tongues, draped in different clothing, fond of different cuisines – could all stay together. However, the India we know today is vastly unfamiliar – one begins to doubt if the garb of harmony and secularism was simply that – a garb. To remind ourselves of our legacy, we must revisit history, for our forefathers might have some wisdom to impart. With that, we bring you the story of Brigadier Mohammad Usman, an Indian soldier who refused to join Pakistan as its army chief and died fighting for India.

Mohammad Usman was born in Azamgarh in Uttar Pradesh. One of three sons, Usman was a bright kid and had much compassion for others in his heart from a young age. At the age of 12, he jumped into a well to save a child.

Once an adult, Usman decided to join the Indian army. This was the 1930s, and it wasn’t easy for Indians to secure coveted posts in the British Indian army. However, Usman was able to get into the prestigious Royal Military Academy Sandhurst in the UK, and was commissioned as a second lieutenant in 1934, when he was appointed in the Unattached List for the Indian army. A month later, he was attached to the 1st battalion of the Cameronians for a year. 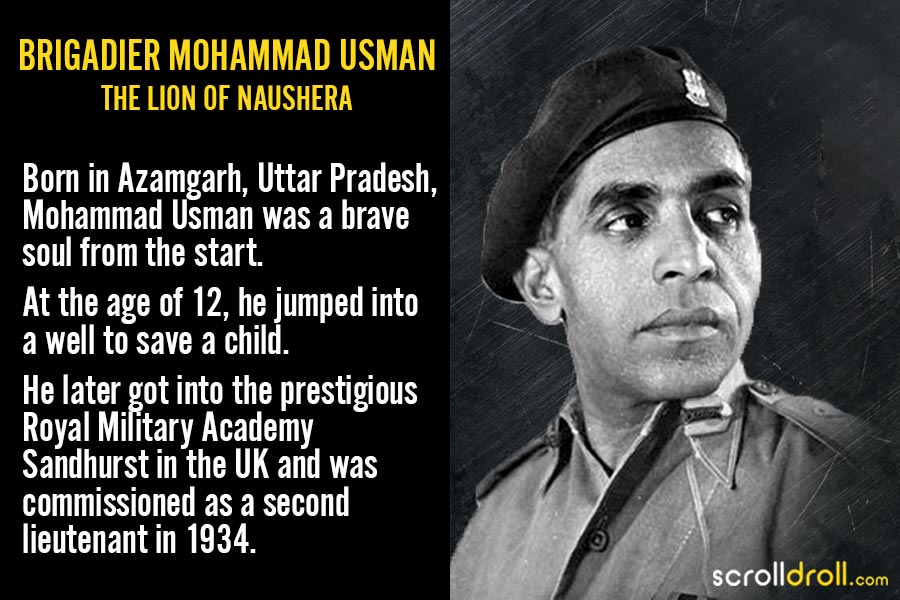 A year later, he was appointed to the 5th battalion of the 10th Baluch Regiment. During the Mohmand Campaign of 1935, he was in active service on the North-west frontier of India. The same year, he qualified as a first class interpreter in Urdu in November. Mohammad Usman was promoted to the lieutenant rank in 1935 and to the rank of Captain in 1941. He attended the Indian Army Staff College in Quetta (now in Pakistan) between February to July in 1942. 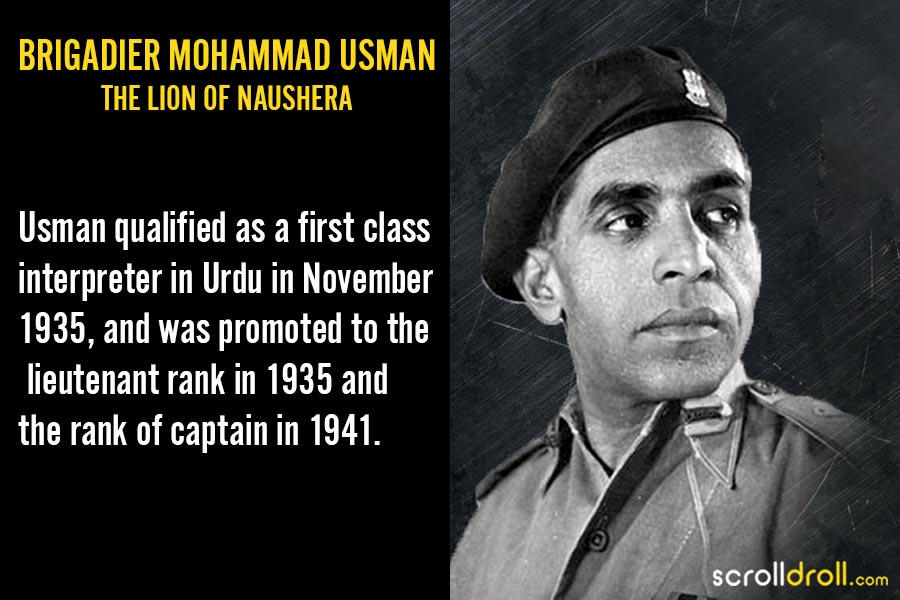 During the partition of India, he was one of the highest ranking Muslim officers in the Indian army. The months leading to the partition brought a lot of pressure for him, as he was being pursued to accept the role of the Army Chief of the Pakistani army. However, despite the lucrative job offer, Brigadier Mohammad Usman was determined to stay in India and serve the Indian army. After his refusal to join the Pakistani army, he was transferred and posted to the Dogra regiment. 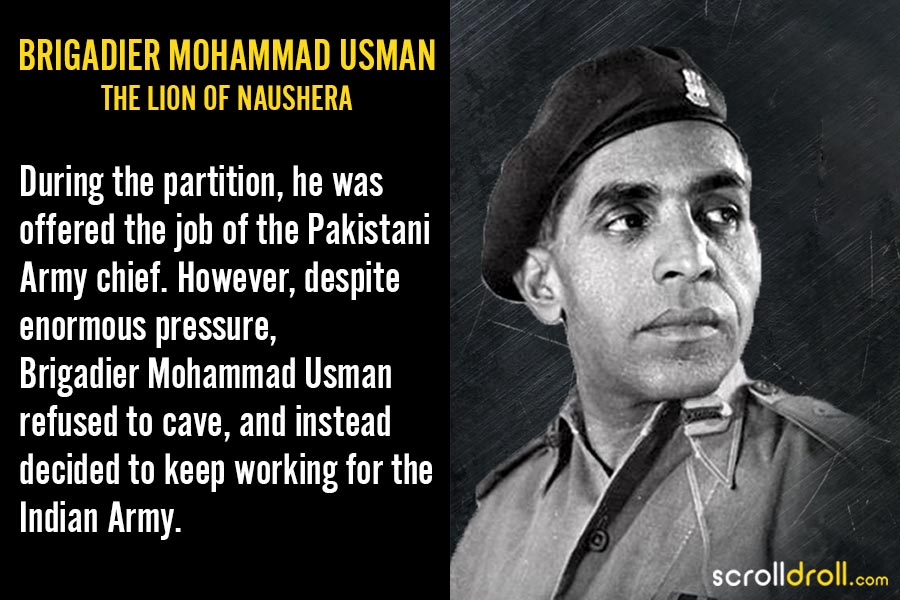 In 1947, tribal irregulars were sent by Pakistan into Jammu and Kashmir in an attempt to capture the Indian state and have it accede to Pakistan. At that time, Brigadier Mohammad Usman was commanding the 77th Parachute Brigade. However, he was sent to the 50th Parachute Brigade in Jhangar. Because of its location between Mirpur and Kotli, it was of utmost strategic importance to India. Due to some unfavourable circumstances, the Indian troops lost Jhangar to Pakistan. The day Jhangar was captured, Brigadier Mohammad Usman vowed to bring it back under India’s control. 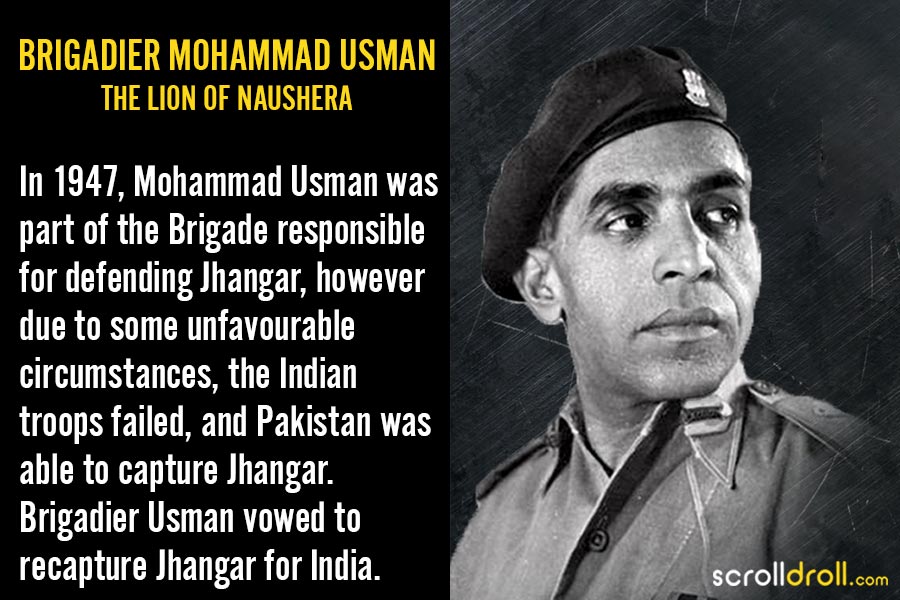 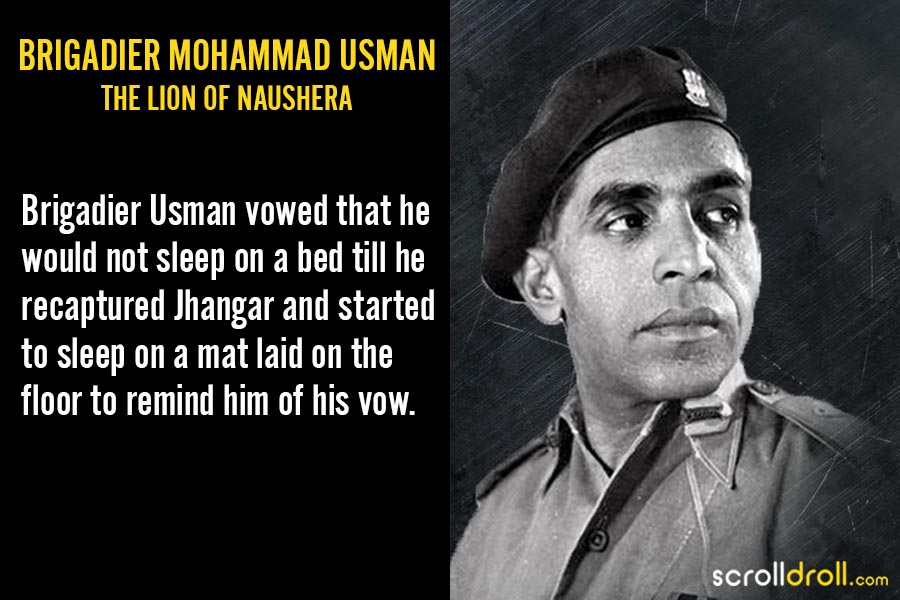 In the months of January and February of 1948, Brigadier Mohammad Usman led the Indian troops to successfully defend Nowshera in a battle that wounded around 2000 Pakistanis compared to the 102 on India’s side. Because of his fierce repulsion of the attacks, he was nicknamed Lion of Nowshera. Pakistani forces even went as far as putting a bounty of Rs 50000 on Usman’s head. Despite all of this fame and success, Brigadier Mohammad Usman continued to burn with the longing to recapture Jhangar. 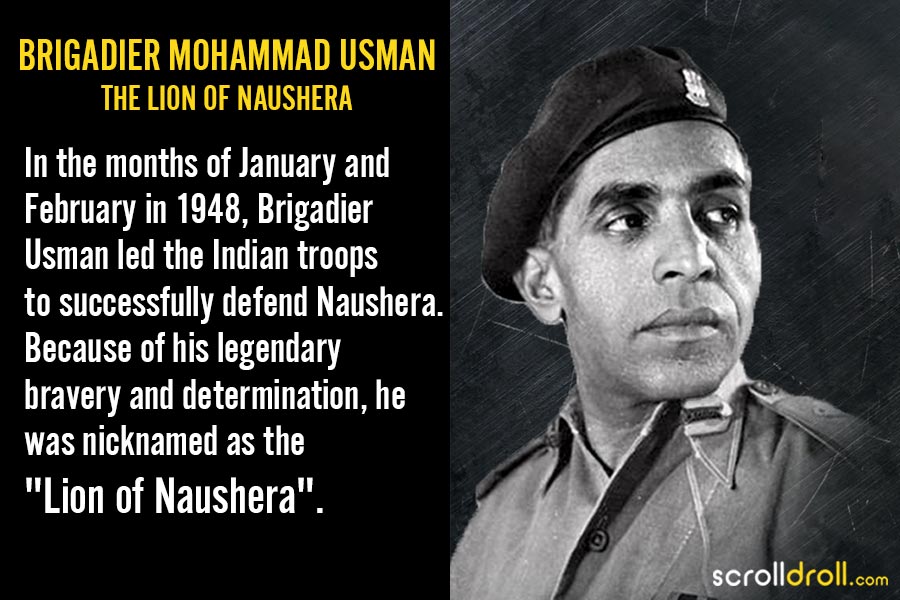 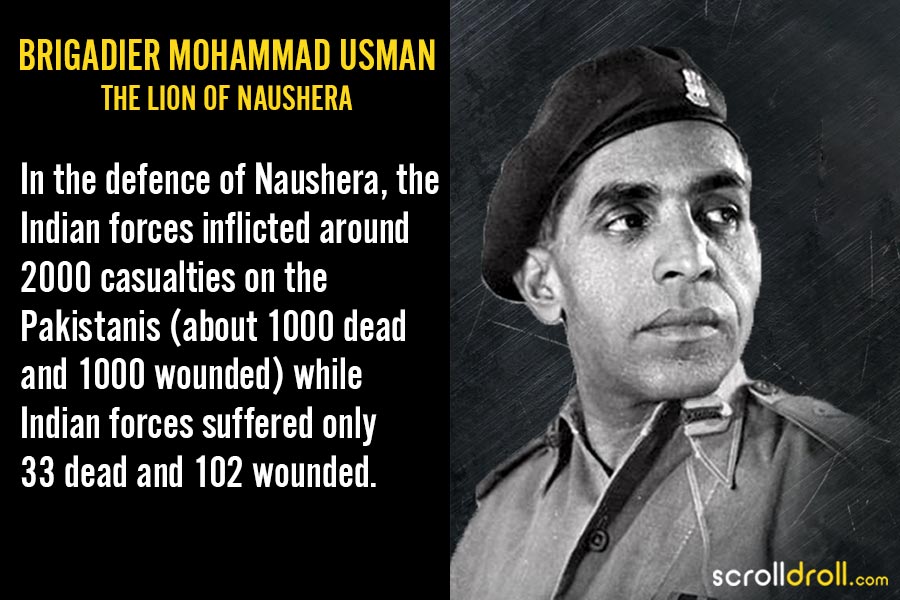 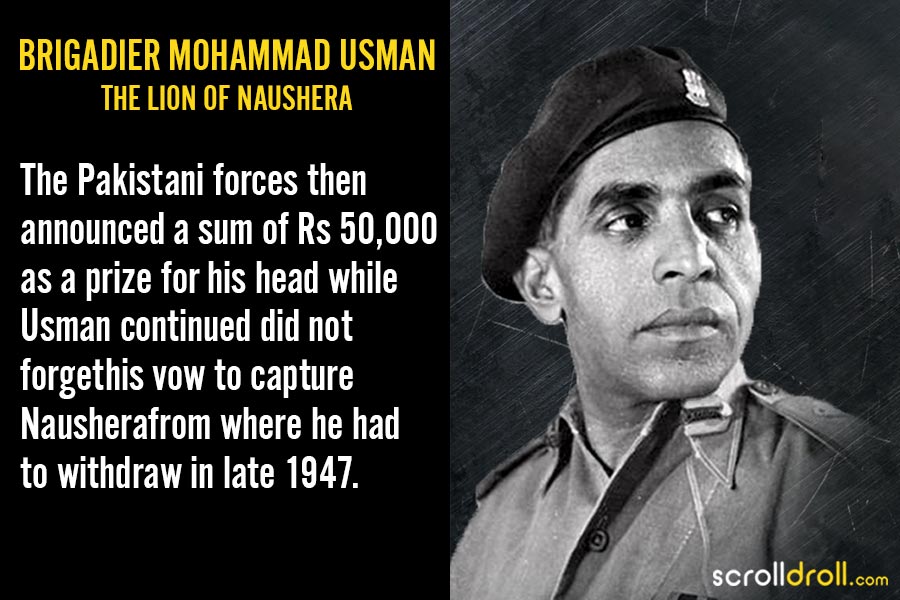 In the last week of February, the Indian troops were finally able to drive away the enemies from Jhangar. However, Pakistani forces kept trying to recapture it. The struggle between the Indian and Pakistani armies continued for months, with Pakistan bringing its regular forces into the fray in May 1948. The attacks and retaliation continued, and it was during this that Brigadier Mohammad Usman was killed by an enemy 25-pounder shell on the 3rd of July in 1948 at the age of 36. 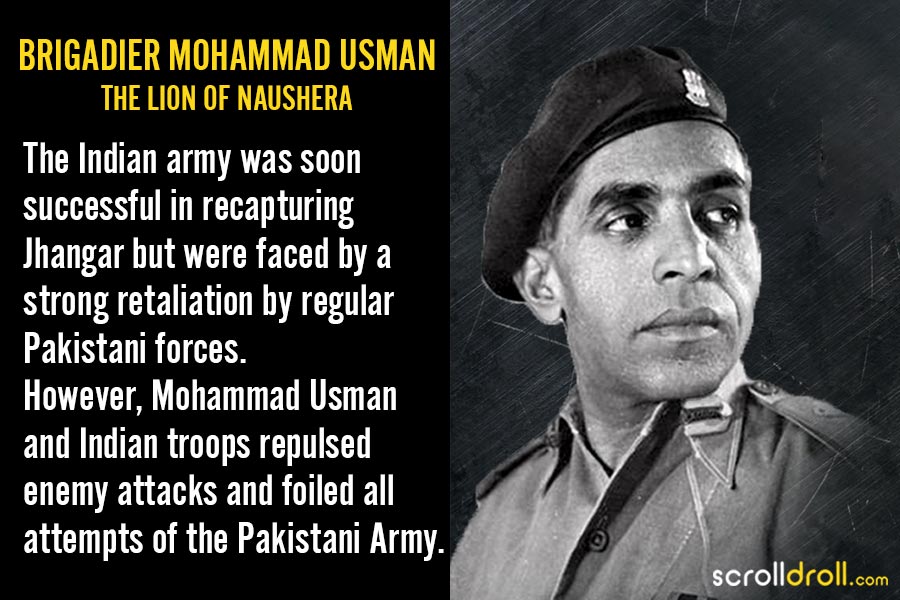 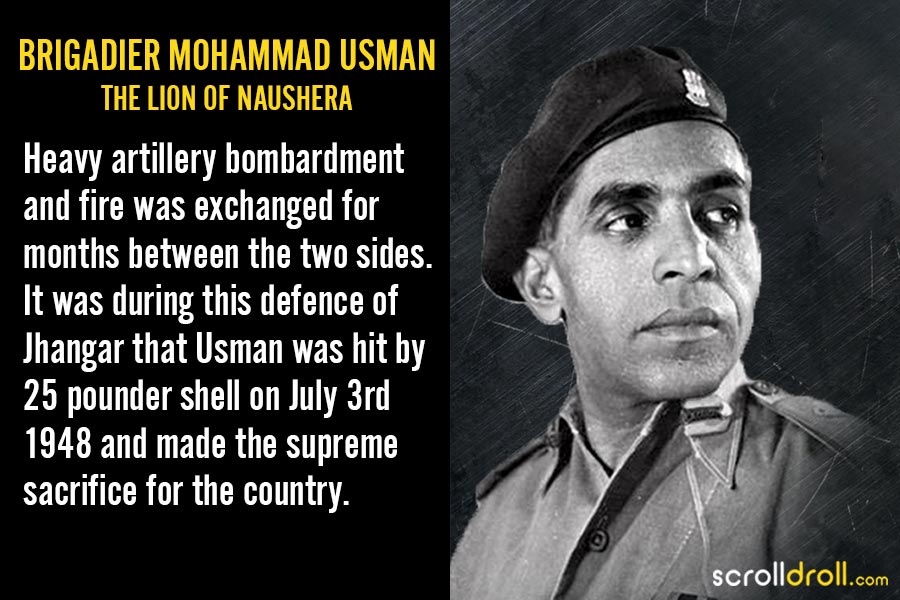 His last words were, “I am dying but let not the territory we were fighting for fall for the enemy.” Because of his unwavering bravery and his love towards his country, Brigadier Usman was awarded the Maha Vir Chakra, the second highest military honor in India. 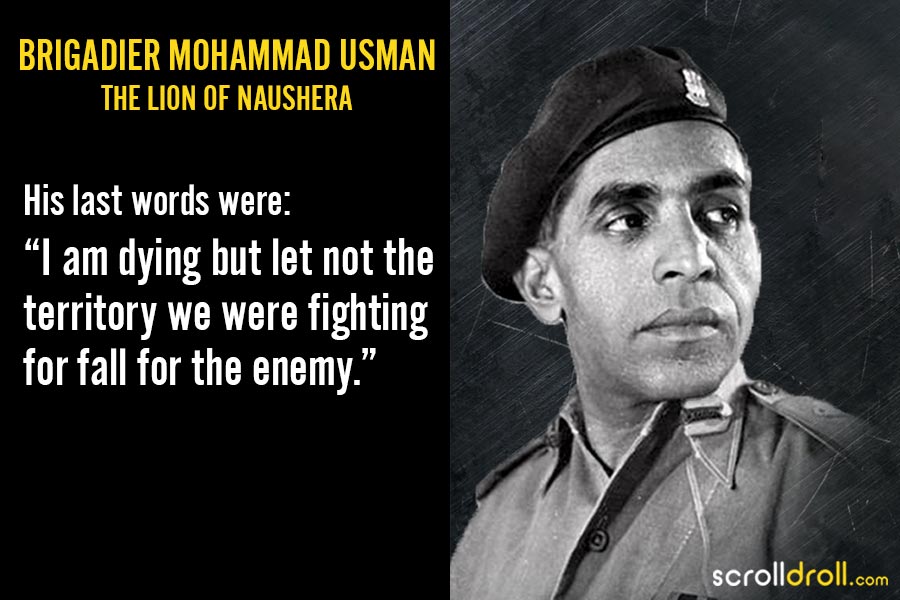 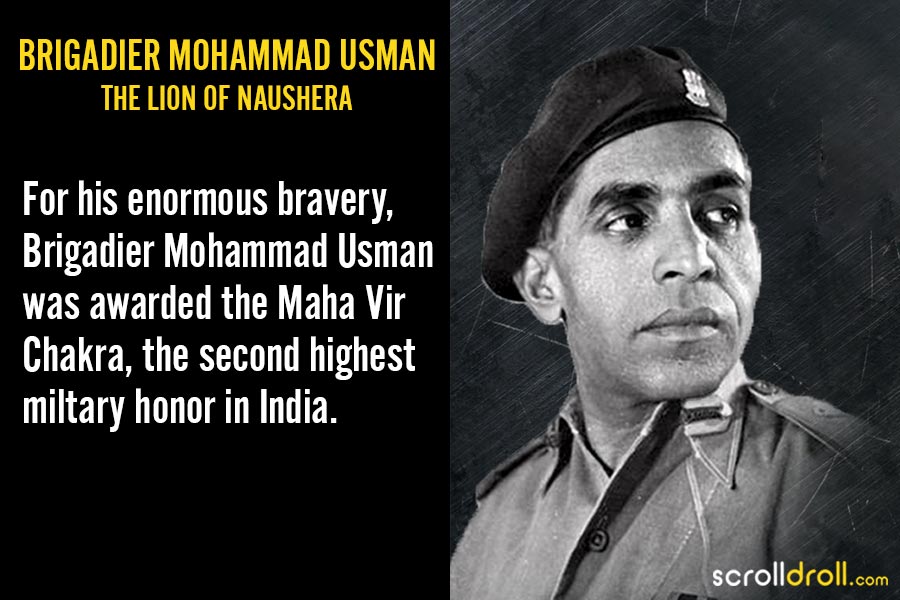 At the time of his death, Brigadier Usman was the highest ranking military commander of Indian army to have laid down his life in the battlefield. He received a funeral with full state honours, and then Prime Minister Jawaharlal Nehru also attended his funeral. Usman was buried in a grave near the Jamia Millia Islamia campus in New Delhi. 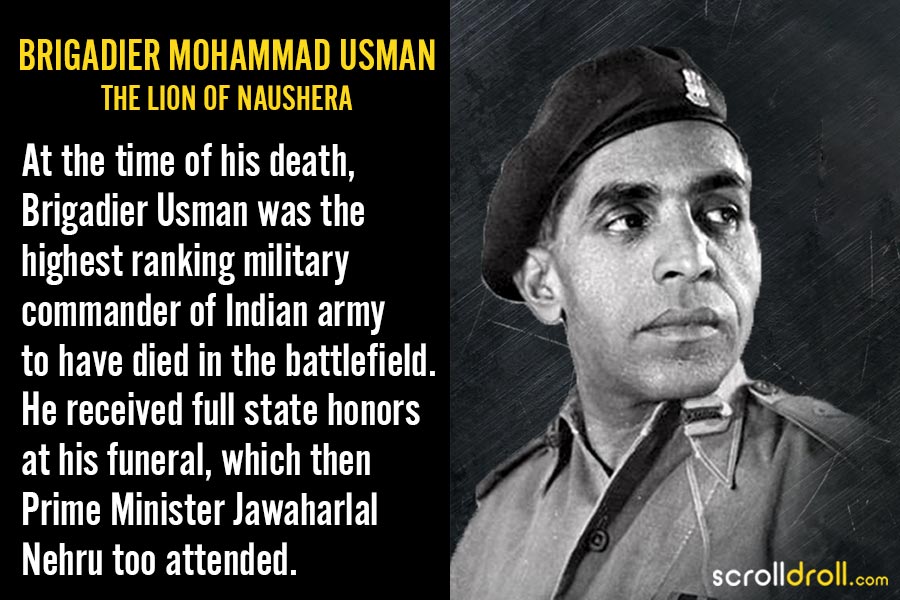 We must make it a point to remember heroes like Brigadier Mohammad Usman who had so many lessons to teach to the India we live in today!

10 Most Hilarious Rohit Sharma Meme Templates You Will Enjoy