Trees are our best friends. They do so much for us humans, and ask for nothing in return. But sometimes, they need a hug. At least they did in 1960s and 70s, when the government started allowing foreign companies to fell trees in the lush forests of Uttar Pradesh (Present day Uttarakhand) at an unprecedented scale. This not only worried the communities that lived nearby, but actively posed a threat against their livelihood, and it eventually led to one of the first ecofeminist movements in India. With that, we bring you the story of Chipko Andolan – a true feminist movement!

Also read: The Real Story Behind KGF: The Life And Adventures Of Rowdy Thangam

The story of Chipko Andolan begins with the Sino-India conflict, which in 1963 translated into the government of India allowing major infrastructural developments in the otherwise densely forested area. The communities that lived near and around these forests depended upon them for food and fuel. 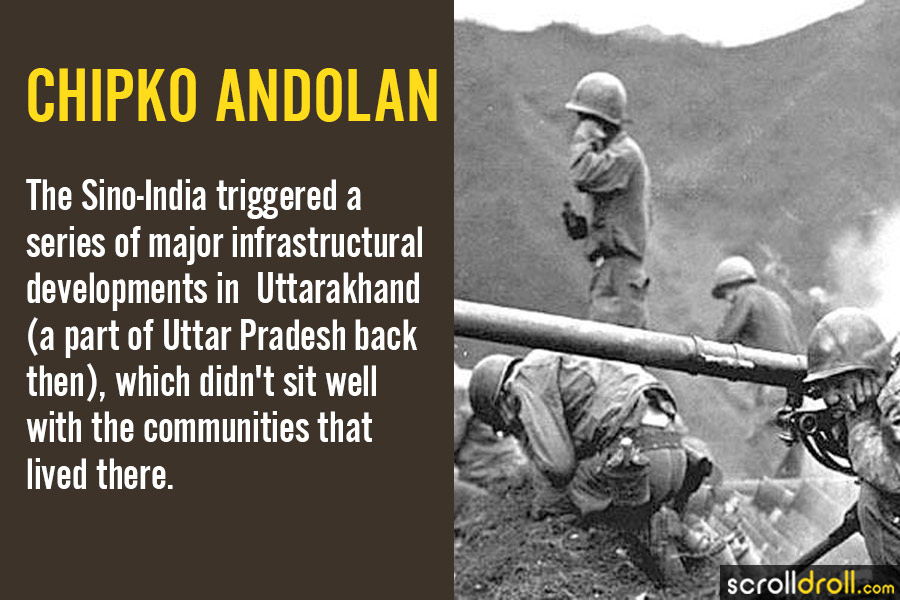 With the rise of infrastructure, foreign logging companies began eyeing the lush green forests that remained unhampered in Uttar Pradesh (Present day Uttarakhand), and they started exploiting these forests for commercial use.

In 1970, a flood devastated these earlier impenetrable areas: continuous logging of trees had left the communities of people who lived nearby vulnerable to otherwise avoidable disasters. The unchecked deforestation created all kinds of problems: lower agricultural yield, depleting water resources, and erosion of lands that caused floods. 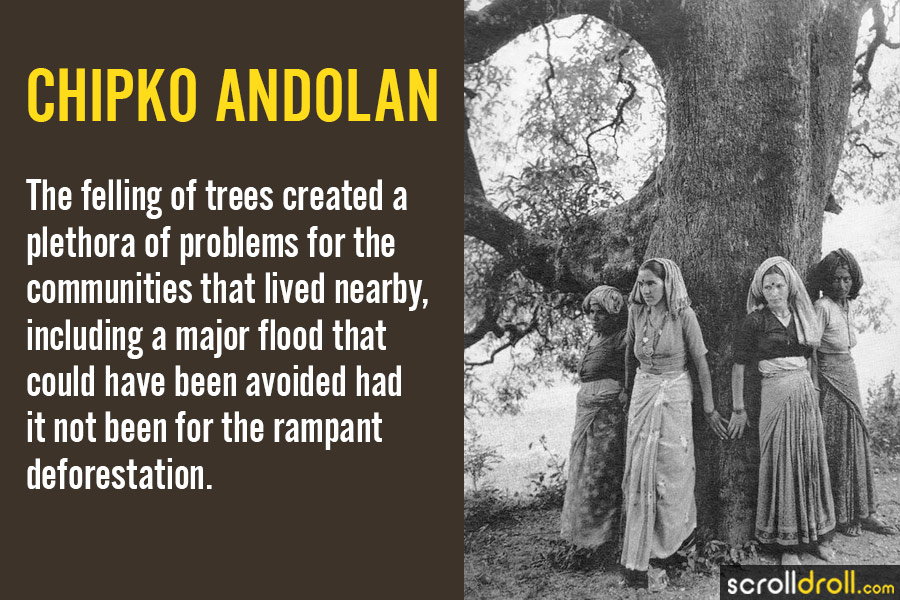 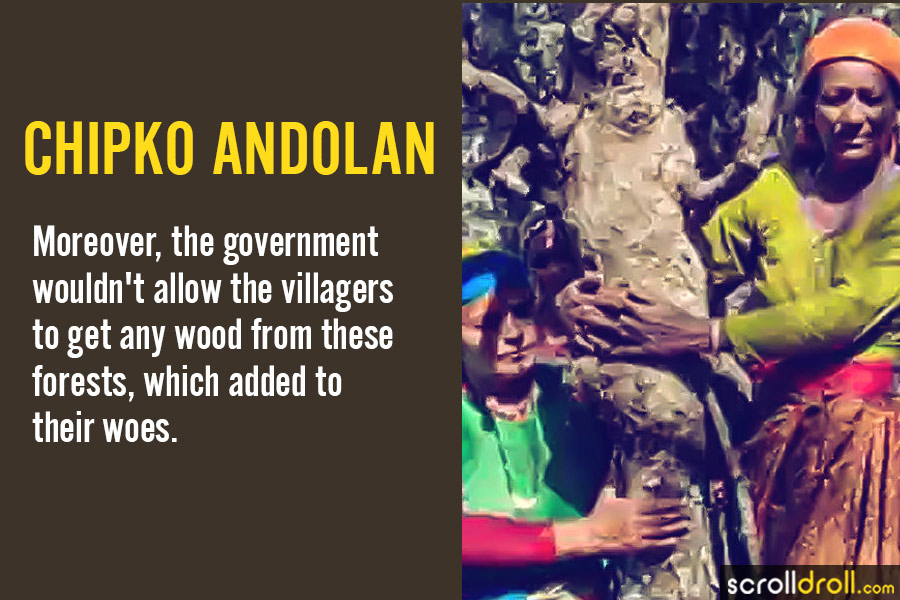 In 1973, Chandi Prasad Bhatt, a Gandhian activist, led the first Chipko movement. Bhatt was the founder of cooperative organisation, Dasholi Gram Swarajya Sangh (Founded 1964). The first Chipko movement took place near a village named Mandal in the upper Alaknanda Valley. When the government refused to entertain their pleas, Bhatt led a group of villagers into the forest, where they hugged the trees in order to save them from being cut off. 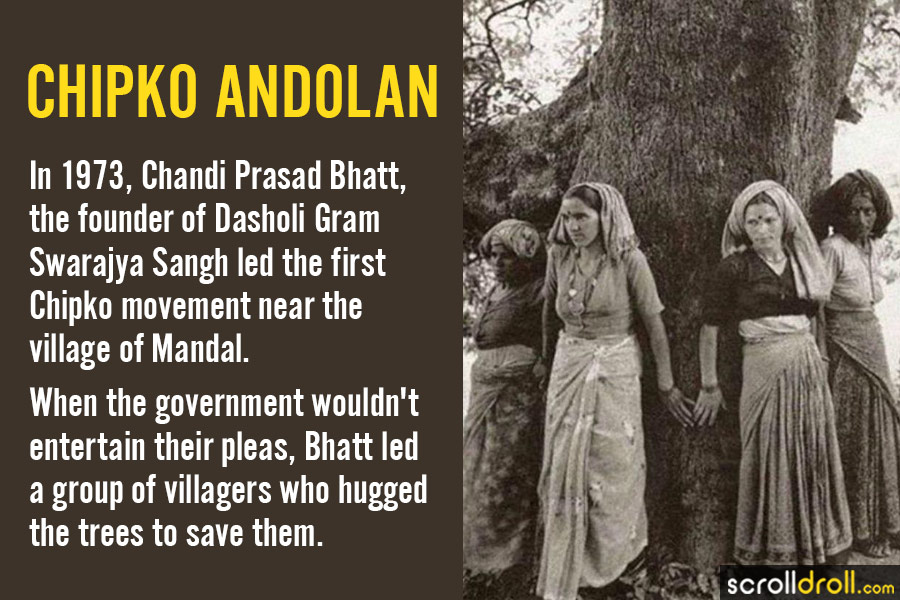 However, this tree-hugging tactic wasn’t a new idea at all, in fact, something similar had happened in Rajasthan a hundred years prior, when the Bishnois sacrificed their lives to save the Khajiri trees from being cut off, as the Khajiri trees were thought to be auspicious in their culture. 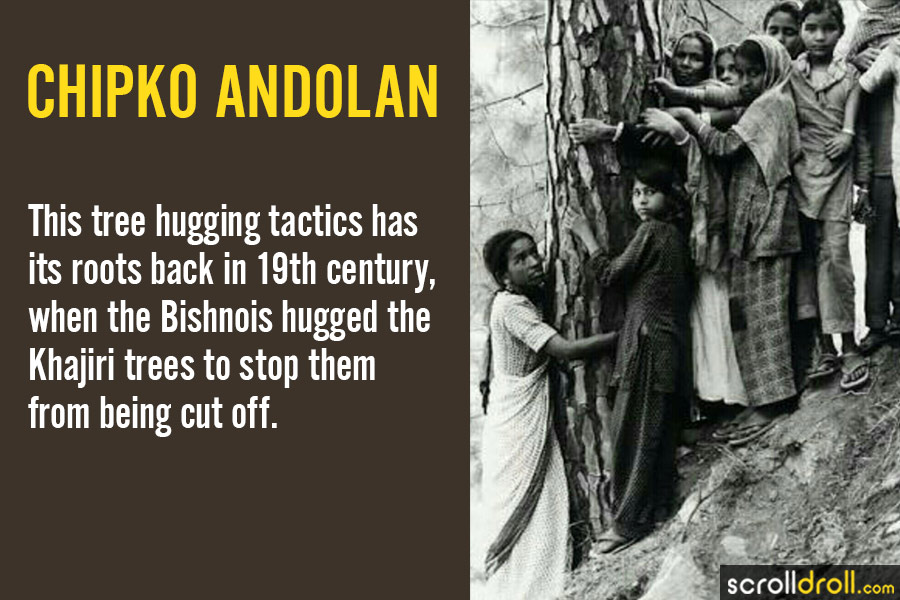 After many days of continuous protests, the government cancelled its permit to the sports company, and alloted the land requested by the villagers. Because of the success of this protest, these tactics were shared by the villagers, the members of Bhatt’s organisation, as well as another Gandhian activist, Sunderlal Bahuguna, among other villagers throughout this region who were facing similar issues. 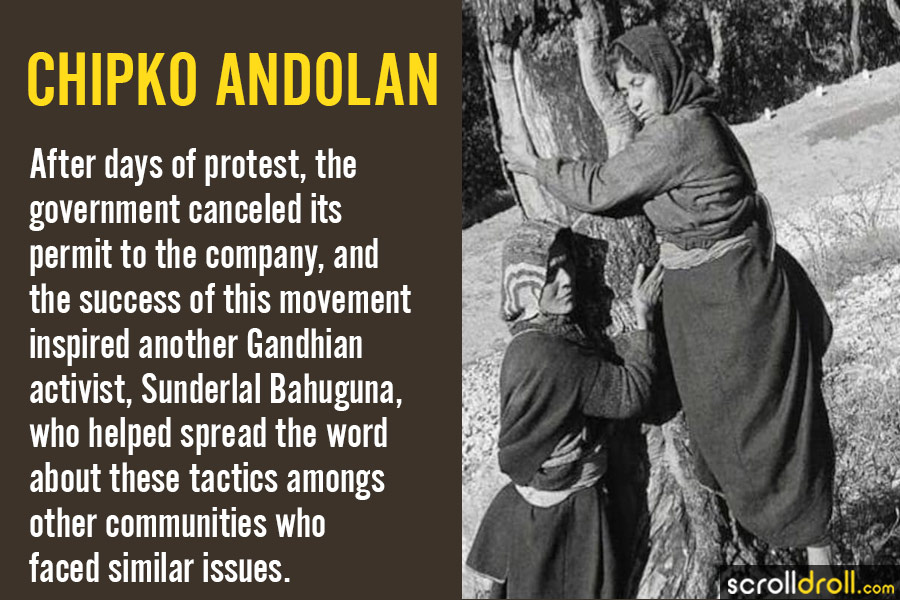 When in the village of Reni during one such protest the government summoned the men on the pretext of discussing a compensation, in order to allow a troop of workers to fell the trees in their absence, the women of the village took the position of men, and hugged the trees. These group of women were led by Gaura Devi. 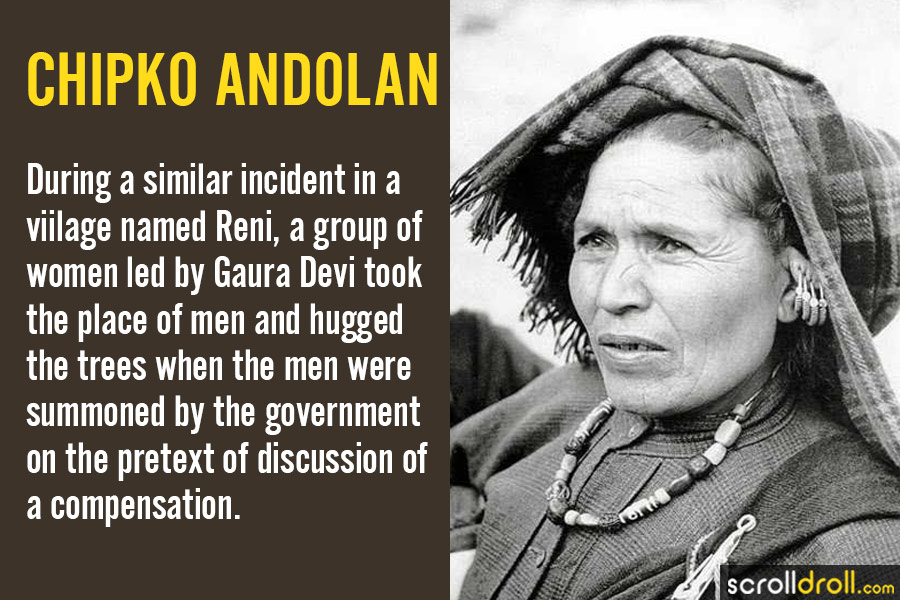 This move didn’t happen in a vaccum; the felling of trees harmed the livelihood of women, and personally affected them, as they played a vital role in agricultural activities as well as looking after their families. These women did not just hug the trees to save the forests, they hugged these trees to save their agency, their position in this agrarian world. Because of this, Chipko movement is seen as one of the very first Indian ecofeminist movements. 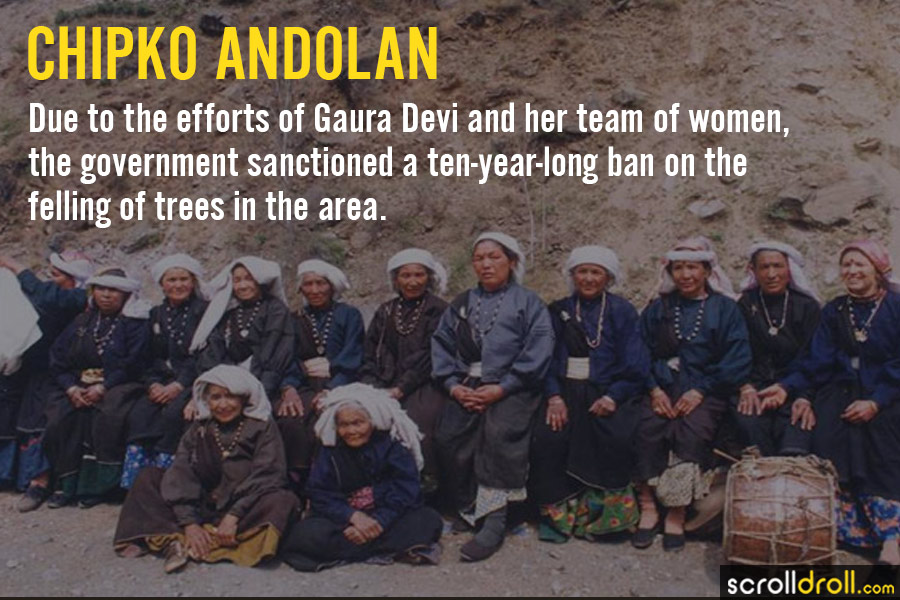