As far as food is concerned, Odisha is a place that never disappoints. Now that a promise has been made to explore some of the best traditional dishes from Odisha, I wonder, where do I start? If I start talking about sweets, there are at least 6 major types of ‘Pithas’, and hundreds of other sweet delicacies that are prepared specifically in Odisha. Not to mention the range of authentic curries, lentil soup, saag, the sweet and salty variations of the delectable sour dish called ‘khatta’, the tempting seafood, and many more. The craze for seafood in Odisha is on another level! There are so many dishes involving fishes (sometimes dried and salted; sukhua), prawns, crabs, etc. And a range of mutton and chicken dishes prepared by roasting them in leaves and bamboo sticks. The sweets, starting from Khaja, to Kora Khai, to Rasabali, to Sarsatia!

Okay, let’s start with Abadha. We all know that Odisha is the land of the grand Jagannath Temple. The food offered to Lord Jagannath during prayers is known as Abadha. It comprises 56 major dishes that are served to the Lord at various times of the day and it is the most delicious food that one can come across. Since Abadha is a class apart from all other items that have been listed in this article, it has found a place here in the introduction. Although, we will come across a few traditional dishes from Odisha that are a part of the aforementioned Mahaprasad and still have a taste distinct enough for a separate mention.

Here’s a list of some of the most delicious and equally healthy traditional dishes from Odisha!

The perfect food for a hot summer day, this traditional dish from Odisha is not just a dish but an emotion. This is prepared by adding water to cooked rice (Saja Pakhala) which is stored overnight for fermentation (Basi Pakhala). It is usually tempered with cumin seeds and curry leaves, curd is optional. It is served with another traditional dish called the Badi Chura, which is basically a crumble of sundried lentil dumplings. Servings of fried vegetables, fish, and saag (shallow fried leafy greens) are usually served along with Pakhala. 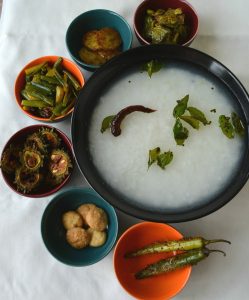 Dalma is a preparation of lentils boiled along with other vegetables to form a wholesome, thick soup. Toor dal is usually used to prepare Dalma. Vegetables such as brinjal, raw banana, raw papaya, drumsticks, and pumpkin are usually added to this dish. It is further tempered with a five spices seasoning (Cumin, Brown Mustard, Fenugreek, Nigella, and Fennel) called Panch Phutana which gives the dish its distinct taste. 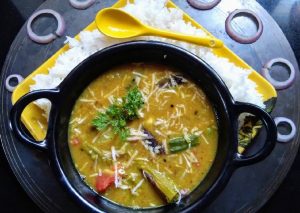 There are two types of Santulas prepared in Odisha. One is the Bhaja Santula (fried) and the other is the Sijha Santula (boiled). This is a fuss-free, almost no oil, spice-free dish that can be digested by the weakest of stomachs. This extremely healthy dish comprises vegetables such as ladyfingers, potatoes, brinjals, etc., and is seasoned with the Panch Phutana along with some onions, and garlic, which again is optional. 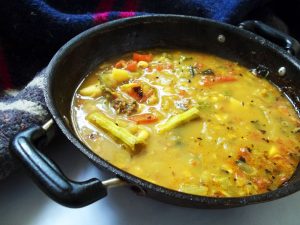 As the name suggests, Ghanta is a mix of various vegetables, cooked with chickpeas and is a popular delicacy amidst the various festivals celebrated in Odisha. For example, during Pua Jiuntia (A festival of Western Odisha where mothers fast for the long life of their children) more than 20 different vegetables and other ingredients are used to prepare the special Ghanta tarkari to be served on the next day. 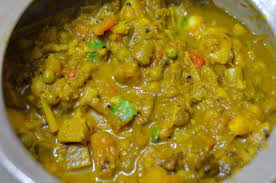 There are quite a few unique varieties of pithas (boiled or fried cakes) that are prepared in Odisha. Be it the famous Poda Pitha prepared during the Raja Festival or the Enduri Pitha (Haldi Patra Pitha) prepared during Prathamasthmi. Several other pithas, such as the Kakra ( prepared with Semolina or Wheat flour), Manda (prepared with Rice flour), and Chakuli (pancakes prepared with a batter of soaked rice and Urad dal), are also very popular. Most of these pithas are known for their characteristic coconut and jaggery filling. The image below shows the one-of-a-kind Enduri Pitha that is prepared by boiling a batter of rice flour with coconut and jaggery filling inside turmeric leaves. 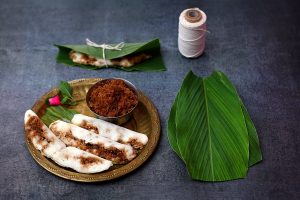 Besara is the typical mustard seed paste taste that is the authentic flavour of the majority of traditional dishes from Odisha. While any protein or vegetables can be used as the base of this dish, a seasoning of mustard seeds, cumin seeds, garlic, and dry chilli add more flavour to this dish. The famous Besara dishes are the traditional Besara prepared with vegetables (raw green banana, pointed gourd, drumsticks, pumpkin, yam, etc.) that are served in the Jagannath Temple and the crowd favourite Macha Besara (fish prepared with mustard paste). 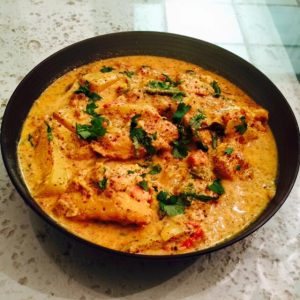 Any typical Odia meal is incomplete without these sour and sometimes sweet delights. Amba Khatta (green mangoes, jaggery), Dahi Baigana (Curd, Brinjals), Khajuri Khatta (Date palms), and Ambila (the western Odisha delicacy of vegetables cooked with Mahi, a type of buttermilk). These dishes are seasoned with panch phutana, the star of every traditional Odia dish.

The famous debate of whether Rasagolla belongs to Odisha or West Bengal is little of our concern. This sweet chenna delight has been served in the Jagannath Temple for eons. The way in which the people of Odisha have embraced this sweet delicacy is beyond imagination. Little (and sometimes huge) balls of chenna dipped in sugar syrup that simply melts in your mouth, this sweet is one of the most famous traditional dishes from Odisha. 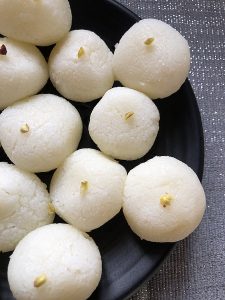 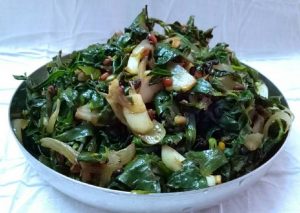 Kanika is a part of the 56 special dishes offered to Lord Jagannath as part of the Mahaprasad. It is a sweet, spiced, and fragrant rice dish. It is prepared with desi ghee and garnished with dry fruits. It is extremely tasty and is often accompanied by a serving of Dalma, fried pumpkin flowers (kakharu phula bhaja), and some Khatta. Apart from Kanika, there are several other rice dishes that are quite popular in Odisha. Be it Pilaf or Khichdi, rice is prepared and served in several different ways in Odisha.

The people of Odisha are huge foodies. Dahi Bada- Aloo Dum, Mudhi Mangsa, Chaul Bara, and so many more famous dishes from the streets of Odisha have not made this list. That doesn’t mean that they are not popular. In fact, they are so popular that they may even need a separate list to be described in their full glory. The food of Odisha, owing to the less use of oil and spices, is one of the healthiest cuisines of India. It is also a cuisine that doesn’t compromise taste with health. Which of these dishes from Odisha do you find most interesting and delectable? Do let us know in the comments section.

15 Amir Khusrau Couplets Everyone Must Read Once!