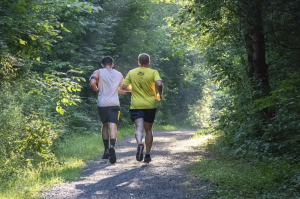 Trail running (cross-country running) is a sports discipline that involves running on natural terrain at a free pace or as part of a competition, which includes elements of cross-country running and mountain running. This type of physical activity, being at the same time a sport, is gaining more and more fans around the world, and very rapidly.

The main difference from cross-country running is the landscape. For trail running, hills and even mountains are usually chosen, as well as deserts, forests and other natural landscapes. Moreover, for running they use both trails and paths, as well as terrain on which the road network is not developed. There are several types of trail running. Some prefer it as a little daily workout, while other trail runners spend weeks out of town or out on the trails. A growing number of people are doing solo trail running hikes in nature. This can be called an ultra-light hike. Whereas a typical out-of-town hike can last about a week, covering 13-20 km per day with a 6-7 kg backpack, a trail runner will cover this distance in 3-4 days with a minimum of things. And, although it is a rather rare type of trail running due to the danger and difficulty, its popularity is growing rapidly.

Trail running is like mountain biking compared to a city bike or road bike. This sport gives an incomparable feeling of freedom and a sense of unity with the natural environment.

As for the impact of trail running on human health and physical fitness, it should be noted that it develops coordination, strength, endurance and the ability to maintain concentration for a long time very well. A trail runner constantly has to make decisions about various aspects of his progression: how to place his foot on the next step in order to safely and efficiently go to the next, and then to the next … and so on. This makes running extremely interesting and action-packed, not to mention the fact that the number of “stadiums” for trail running is endless. More “academic” types of running cannot boast even a small share of such diversity. In addition, trail running is almost always an adventure. This is a test of one’s strengths in the context of natural forces, forces that have always been and always will be. Therefore, for many people, such a run is a means that makes life more harmonious and fulfilling. In terms of injury, in general, trail running is much safer than, say, running on pavement. Muscles, ligaments and joints receive a softer and more correct load. Although, of course, it cannot be denied that there are new risks of injury associated with the characteristics of a particular area, for example, slippery rocks or stones.

In the West, group trail running workouts with friends, colleagues, or dog runs through the forest are very popular. When running solo, it is always recommended to take a mobile phone with you and inform your relatives or acquaintances about the direction in which you are going to run.

The technique of trail running is somewhat different from the technique of regular running. Hands and elbows with this run, as a rule, are spread wider, for better control of balance and body position in space. You also have to raise your legs higher, since there are many obstacles on the surface of the earth that prevent you from running straight and evenly. Often you have to take “non-standard” steps, jump to the sides, take positions that are uncharacteristic for running, for example, making your way through thickets (significantly working with your hands!) or jumping from stone to stone. In fact, every step a trail runner takes is unique.

Trail running satisfies the human need for natural and unchanging things, which is always present in him. This is all the more true in the dizzying digital age of iPads and Androids. The picture of a man running through the forest a thousand years ago would hardly have differed significantly from what can be observed now.

What does a runner who dared to conquer natural landscapes get, again and again going to the mountains and to the forest? Two things. As already mentioned, this is a reduction in the risk of chronic injuries. Natural surfaces are softer and the load on the musculoskeletal system is distributed more evenly and optimally. Second, it’s fun. Yes!

For example, here is a list of equipment that the French athletics federation recommends trail running competition organizers as mandatory.

The last two items of mandatory equipment are convenient to keep in the pocket of the backpack, never taking them out.

Please note that in Europe they are fighting with the use of disposable cups, so you need to use your own, reusable ones at food stations. It is convenient to use folding, it takes up less space in the backpack.

DIY Projects on a New Level: How to Create a Unique Home

Top 15 Steps to Comfort In The House