While animals cannot speak our language, it does not mean that they aren’t intelligent in their own unique way. They too are sentient and can feel emotional and physical pain. Dogs have always been known to be human’s best companion, but humans have not always been kind to their dog friends. Amid disturbing reports about people across the country tormenting human-friendly animals like dogs and kittens, it becomes pertinent to learn about stories of animals who have served us greatly in the past and even saved several human lives! Zanjeer was one such animal who served the Mumbai Police Dog Squad right until he died. Here is the story of Zanjeer – the Labrador Retriever who saved uncountable lives during the ’93 Serial Bombay Explosions.

Also read: The Man Behind Ek Tha Tiger: Ravindra Kaushik And The Story Of Real Tiger

The Mumbai Police Dog Squad became operational in the year 1959, however the scope of the department was very limited. In the earlier days, there were only three Doberman Pinschers in the squad named Kumar, Bindi and Rajah, who helped the police in tracking and solving criminal cases. However, it was Zanjeer who laid a strong foundation for the use of sniffer dogs in police work.

In the earlier days, dogs were only used in traditional criminal cases. However, by the end of 20th century India suffered a horrible surge in terror crimes, and sniffer dogs proved to be useful in detecting bombs and ammunition. At the time of the 1993 Bombay explosions, there were six dogs in the Police Bomb Detection and Disposal Squad. One of these dogs was Zanjeer, who was the best sniffer dog on board with the Police at the time.

Zanjeer was a labrador retriever dog who served the Mumbai police between 1992 and 2000. The dog was named after the superhit Hindi movie from 1973, Zanjeer. Zanjeer joined the Mumbai Police after completing his training at the Dog Training Centre of the Criminal Investigation Department in Pune. He joined the Bomb detection and Disposal Squad on 29th December 1992. His handlers were Ganesh Andale and V G Rajput. They affectionately called him Ginger because of the colour of his fur. 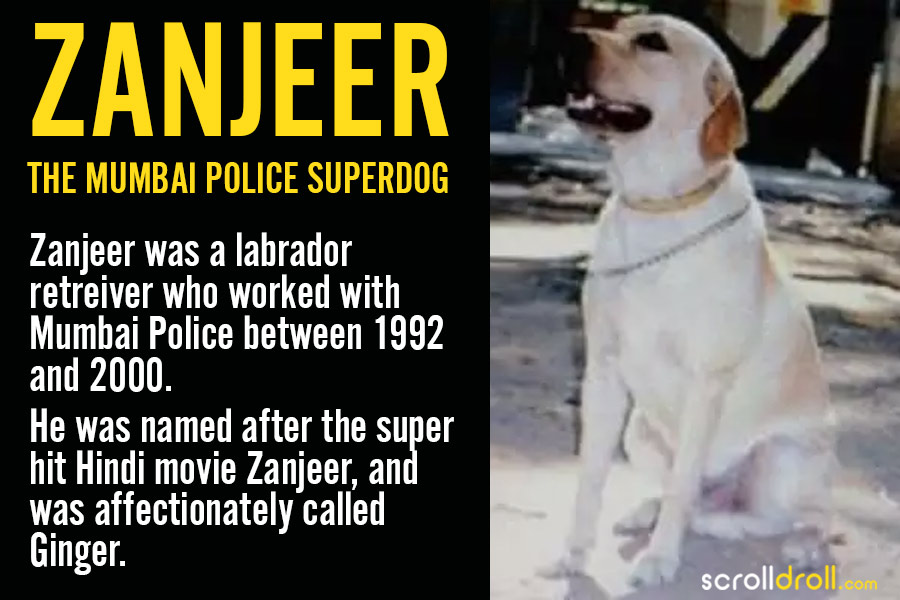 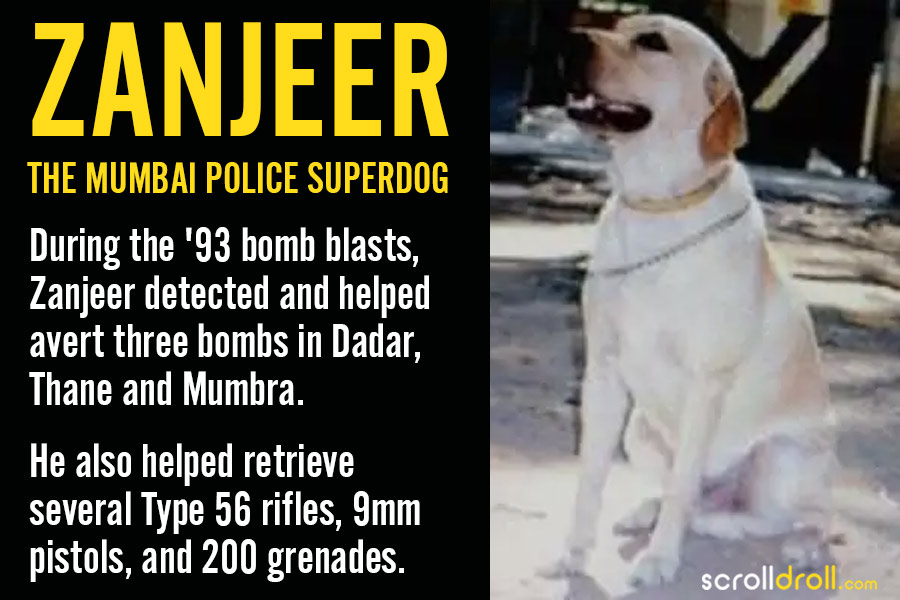 Apart from the 93 Bomb Blasts, Zanjeer helped the Mumbai Police throughout the rest of his life. In fact, he helped retrieve a mind boggling amount of contraband – 11 military bombs, 57 country made bombs, 175 petrol bombs, and 600 detonators! 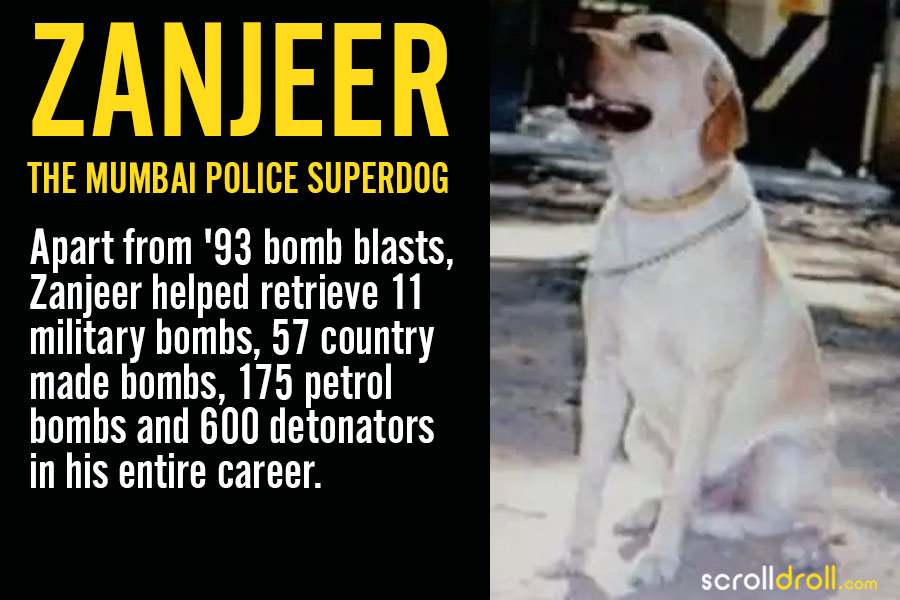 Because of the wide attention Zanjeer’s heroics got him, other state police departments took notice and started recruiting dogs in their police forces. Delhi Police, in fact, went one step ahead and started training Indian street dogs for various security purposes. 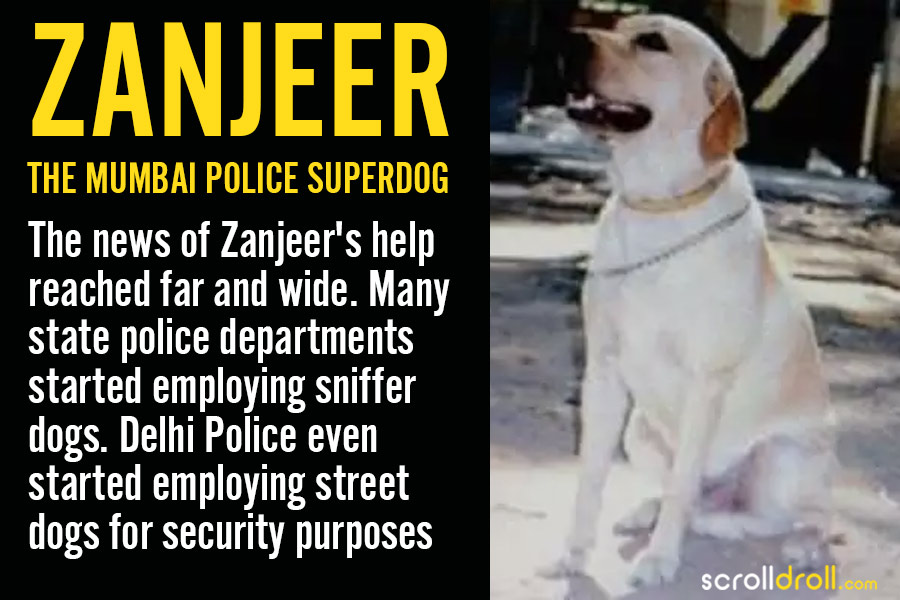 In 2000, sadly, Zanjeer passed away after developing bone cancer. However, Mumbaikars shall continue to remember him as a savior who saved countless innocent lives. 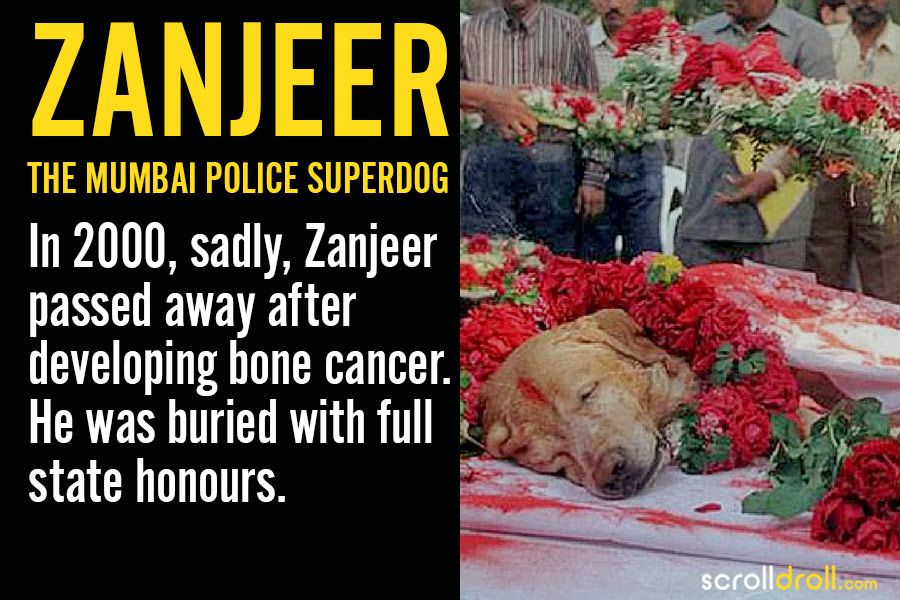 Despite Zanjeer’s death, he shall forever be remembered as a loyal friend and dear companion because of whom several people in Mumbai could escape death.