Their motivation comes from empathy. Their emotional intelligence is great. They are skilled at fostering growth and bringing a sense of stability. We’re talking about female professionals, whose importance and function in society are now widely acknowledged. Female motivational speakers in India are becoming increasingly popular when it comes to corporate events during this time when the world as a whole is making room for female leaders. They not only share the same narrative style as their male counterparts, but they also have inspiring tales of overcoming the additional difficulties faced by women due to the demands of motherhood, marriage, and many social biases. Despite everything, they prevailed.

Here are the 10 Best Female Motivational Speakers in India who may inspire you to shatter stereotypes and develop your inner drive, whether it’s at a corporate event or just another day in your life.

Priya Kumar is a well-known motivational speaker from India who has written 15 best-selling inspirational books. She has been inspiring people for the past 26 years and has worked with more than 2000 multinational corporations in 47 different countries. Through her workshops and books, she has also impacted over 3 million people. She has done it alone among women speakers in India. She is the only author from India to have garnered 42 international honours for her works.

The Final Call, a web series based on Priya Kumar’s fifth inspirational book, “I Will Go With You,” is currently streaming on ZEE5. The Final Call, a television programme starring Arjun Rampal, Jaaved Jaffrey, and Sakshi Tanwar, claims to alter the way you view life.

Vinita is a successful businesswoman who has broken through the glass ceiling. She has held key positions at companies like Britannia, Coca-Cola, and Cadbury. She inspires future leaders to achieve success and encourages female professionals to build a name for themselves in the male-dominated business world as a speaker at numerous academic and industry events in India and overseas.

Vinita has worked in many nations and continents while holding roles with global and regional responsibilities, so she provides a pragmatic and global perspective on strategy, marketing, innovation, and operations.

Sairee Chahal is the founder and CEO of SHEROES, a website where women may find careers. It works with companies to link them with female talent, including employees, partners, clients, and company owners.

She co-founded Fleximoms in the past and is now India’s leading advocate for women in the workplace. She has played a key role in uniting corporations and women professionals on a shared platform as the convener of The SHEROES Summit. She has received nominations for the 2012 Cartier Women’s Award Initiative, Business Today’s Most Powerful Women in Indian Business, and the Editor’s Choice L’Oreal Femina Women’s Award. She has appeared on programmes like Young Turks, Pioneering Spirit, and What Women Want and is a well-known TED Speaker. 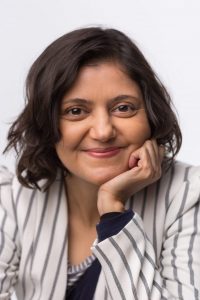 Shivani Verma, better known by her stage name BK Shivani, is one of the most well-known speakers in the entire globe after receiving the famous Nari Shakti Puraskaar, the highest civilian accolade for women in India. She is a spiritual movement leader of the Brahma Kumaris. She has been empowering people from all walks of life in India, the United States, Canada, the United Kingdom, Africa, Australia, New Zealand, the Middle East, and South-East Asia for more than ten years. By taking personal responsibility for their emotions, viewers have been able to overcome mental stress, despair, addictions, low self-esteem, and bad relationships.

When Jaya Kishori was just seven years old, she began her spiritual journey. She has had a strong belief in fate since she was little and has always thought that everything happens for a reason.

Her early years were filled with lessons about values from her family and elders, as well as stories about the Almighty because she was reared in a spiritual environment. This prompted her interest in spirituality and her love of it, which led her to pursue careers as a spiritual orator and motivational coach.  Currently, she is one of the most popular female motivational speakers in India.

Pallavi Malani has trained more than 10,000 working professionals, making her a well-known figure in the corporate world. She is a writer, a blogger, an international business storyteller coach, a certified and licenced emotional intelligence coach, a Master NLP practitioner, a business coach, and a coach in mindfulness.

She is renowned for her powerful training materials and inspirational speeches. She promotes the study of behavioural, cognitive, neurolinguistics, and emotional intelligence to aid in the success of individuals and organisations. She motivates and inspires her clients to transform the way they think.

Laxmi Aggarwal is a well-known motivational speaker, social activist, and victim of an acid attack. Laxmi is well recognised for her inspiring speeches. She received the International Women Empowerment Award in 2019 for her Stop Acid Sale campaign from UNICEF, the Ministry of Drinking Water and Sanitation, and the Ministry of Women and Child Development.

She was given the International Women of Courage award by First Lady Michelle Obama in 2014. Deepika Padukone plays her in the biopic Chhapaak, which is based on her life.

In her brief life, Indian author and motivational speaker Aisha Chaudhary accumulated a wealth of information and ideas. Aisha experienced pulmonary fibrosis, or lung stiffening, as a result of the harsh treatments she had received as a newborn. She faced numerous difficulties as a result, including breathing problems and ups and downs. Aisha’s illness could not stop her from pursuing her objectives and hobbies because she wanted to inspire others to reach their full potential. From the time she was 15 years old till her passing, Chaudhary delivered motivational speeches. She spoke at the INK Conferences in 2011 and 2013 after being named an INK Fellow. In 2013, Chaudhary also spoke at TEDxPune.

She was also the author of one book, My Little Epiphanies, which was published one day before her death.

A mountaineer from India named Krushnaa Patil. She successfully climbed Mount Everest, the highest mountain on Earth, in 2009 when she was just 19 years old, making her the youngest Indian woman to do so. She conquered Aconcagua in 2010 and then Mount Elbrus, the highest peak in Europe. Krushnaa is a member of a team of eight women from six different continents who are on an international expedition to promote clean water access and conservation. The expedition will run from 2014 to 2020. She is now a keynote speaker for her career-building path of enthusiasm and tenacity. Her speeches emphasise overcoming obstacles, succeeding in the face of adversity, and overcoming one’s own obstacles; these themes are distinctively highlighted by her wide-ranging experiences.

Arunima Sinha, an Indian climber of Everest, became the first amputee woman in history to summit the mountain after losing her leg in an accident. Simply put, Arunima didn’t stop there. Arunima Sinha also became the first woman amputee to climb Mount Vinson, Antarctica’s highest peak, in January 2019. Arunima is one of India’s most in-demand motivational speakers because she overcame adversities in her life and learned crucial lessons that helped her identify her life’s purpose and turn problems into opportunities.

Here is the compilation of the 10 Best Female Motivational Speakers in India. We hope you must have found some inspiration if you were looking for it. Watch their videos for more inspiration, and be happy.