Elon Musk is known for his outlandish claims and ideas. Musk, who is the founder of electric car company Tesla and space exploration company SpaceX, was born in South Africa and has some crazy ideas for the future. Among his ideas are the Hyperloop, a futuristic transportation system, a human colony on Mars aided by affordable space travel, linking our brains to computers, and developing micro-satellites to provide low-cost internet access to the masses. Musk is one of the most controversial and unique entrepreneurs of our time as a result of all of this. Scroll down below to read some of interesting facts about Elon Musk and his futuristic venture – Tesla.

1. He invented a game

Elon Musk created and sold a video game to a magazine when he was 12 years old. ‘Blastar,’ a space fighting game, was sold for $500 to PC and Office Technology magazine. Musk also worked for ‘Rocket Science,’ a gaming start-up. 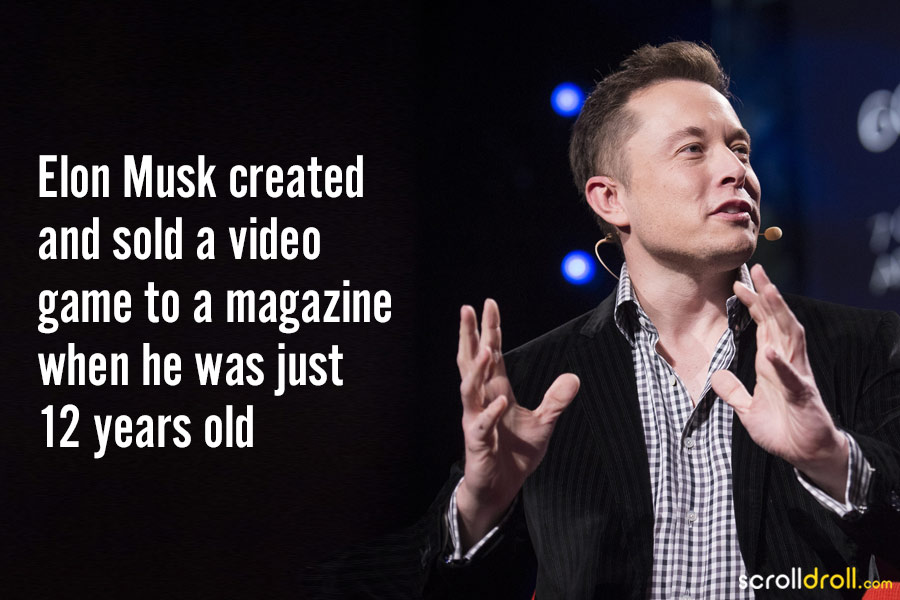 According to Ashlee Vance, author of Elon Musk: Tesla, SpaceX, and the Quest for a Fantastic Future, Musk almost sold Tesla to Google for $11 billion in 2013. Tesla’s future looked bleak at the time, so Musk approached Larry Page, Google’s co-founder and CEO, for a takeover. Musk proposed that Google purchase Tesla for $6 billion, with Musk promising to invest another $5 billion in factory expansion. Musk also demanded that Page hand over control of Tesla to him for the next eight years. The deal came to a halt at the eleventh hour when the sales of Model S, an all-electric five-door liftback produced by Tesla, Inc began to pick up. Tesla is expected to be worth around $100 billion by 2020. 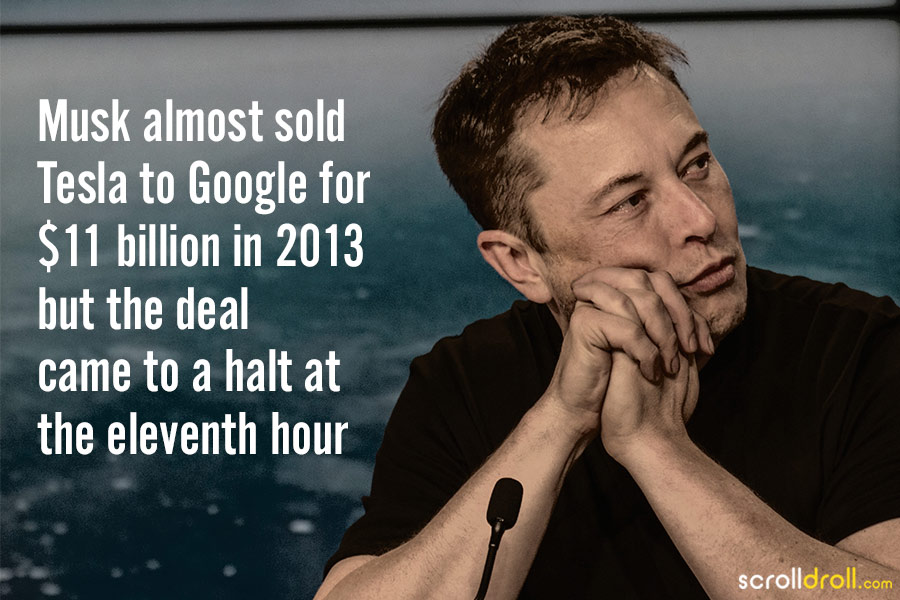 3. His first startup was Zip2

Musk’s first business venture was the founding of Zip2, a company that provided newspapers with maps and business directories and was later sold to Compaq for $307 million. 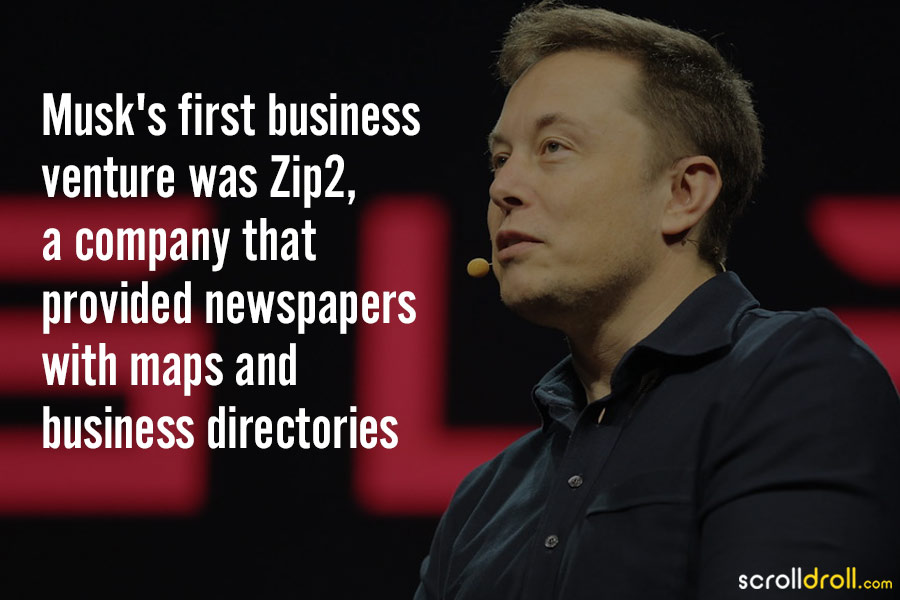 4. Musk dropped out of Stanford after just two days

Elon Musk, his mother, sister, and brother moved from South Africa to Canada when he was 17 years old. He studied for two years at Kingston University in Kingston, Ontario. The University of Pennsylvania awarded him two bachelor’s degrees, one in physics and the other in economics. Later, he relocated to Stanford University in California to pursue a Ph.D. in applied physics. He dropped out after two days to start Zip2 Corporation, a company he co-founded with his brother Kimbal to provide licenced online city guides for newspaper publishers. In 1999, he sold the company to Compaq for $300 million. 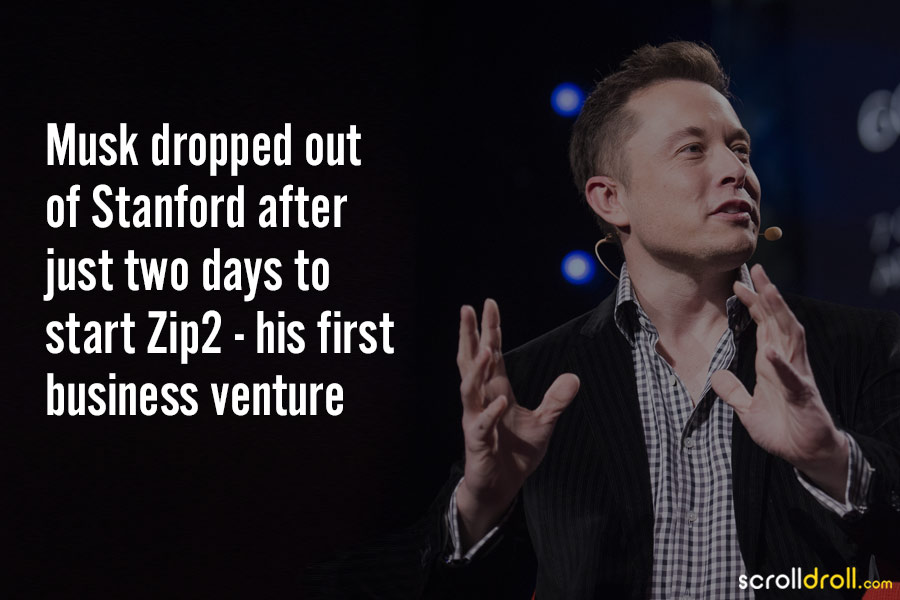 5. Musk made a cameo on ‘The Simpsons’, The Big Bang Theory

In 2015, Musk appeared as a guest on the popular television show The Simpsons. In the episode “The Musk Who Fell to Earth,” the charismatic CEO (voiced by Elon Musk) arrives in Springfield in a spacecraft and finds inspiration from Homer Simpson. Musk also appeared in an episode of the popular sitcom The Big Bang Theory in the same year. In the episode, he played himself.

Musk established Space Exploration Technologies, or SpaceX, in 2002. Musk believed that humanity’s survival hinged on its ability to evolve into a multi-planetary species, but that current rocket launch technologies were prohibitively expensive. With the launch of the Falcon 1 in 2006, the Falcon 9 in 2010, and the Falcon Heavy in 2018, he was able to accomplish this. 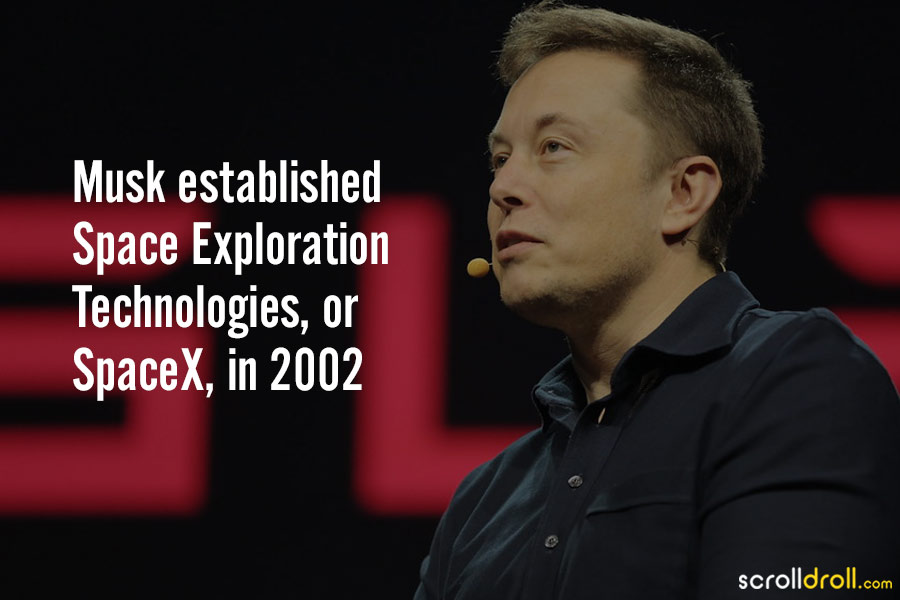 Musk purchased James Bond’s classic submarine car at a London auction in 2013. The submersible Lotus Esprit featured in the 007 classic “The Spy Who Loved Me” was reportedly purchased for $968,000 by the SpaceX CEO. Musk was rumoured to want to turn the car into a submarine at the time. The Lotus is said to have been lost after its first appearance in The Spy Who Loved Me, but it was rediscovered in a storage container in Long Islands, New York, in 1989, wheel-less and wrapped in blankets. 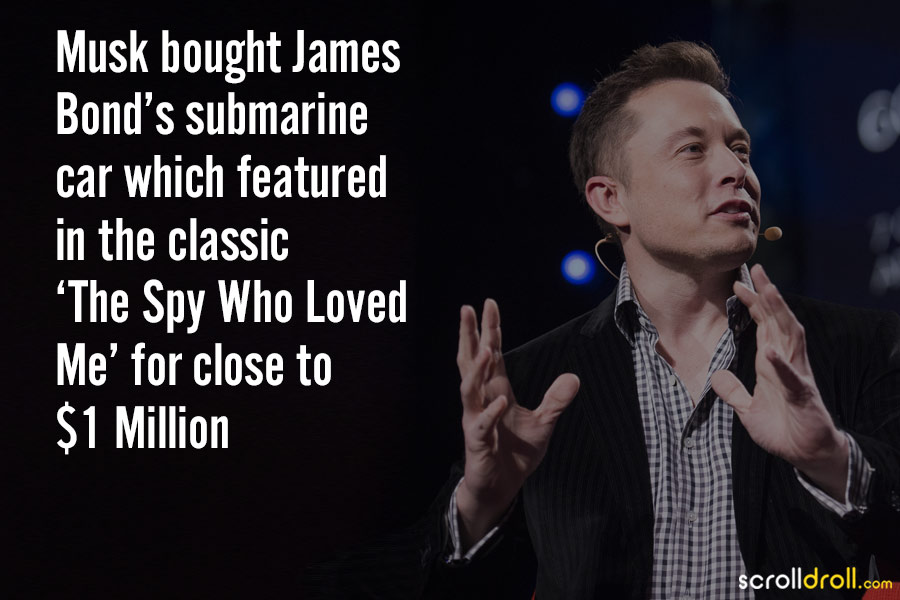 Musk and his roommate Andeo Ressi rented a large house and converted it into a nightclub while still students at the University of Pennsylvania in order to pay rent. According to Vogue, the club could hold up to 1,000 people, so it wasn’t a small setup. “Some nights, I’d be like, ‘Where’s Elon?’ and I’d go up to his room and pound on the door, and he’d be in there alone playing a video game,” Ressi told Vogue. 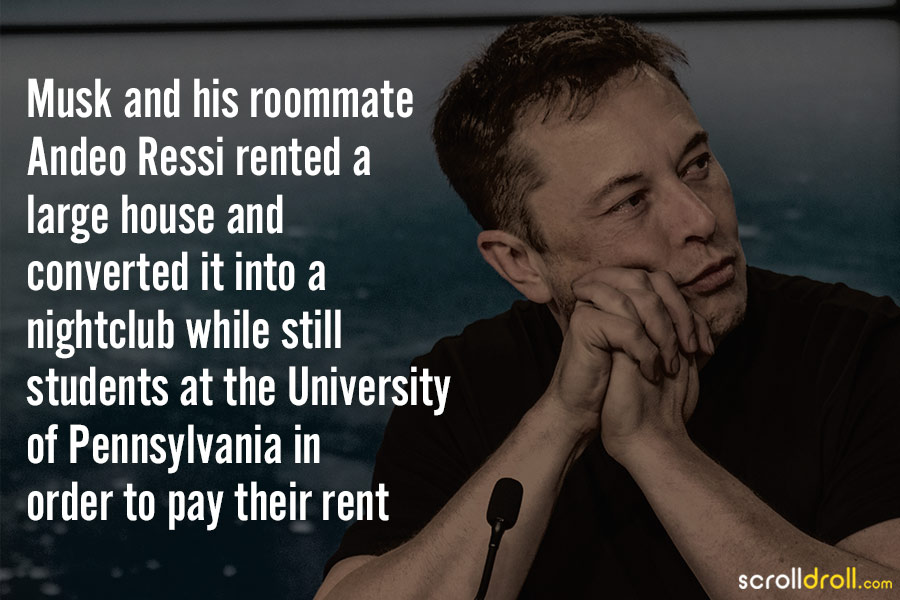 Did you know that in the 2008 film Iron Man, Robert Downey Jr. based his character Tony Stark on Musk? Iron Man director Jon Favreau admitted to Time Magazine that Robert Downey Jr turned to Musk for help learning the mannerisms of a tech-savvy billionaire. Musk also appeared in Iron Man 2 as a cameo. 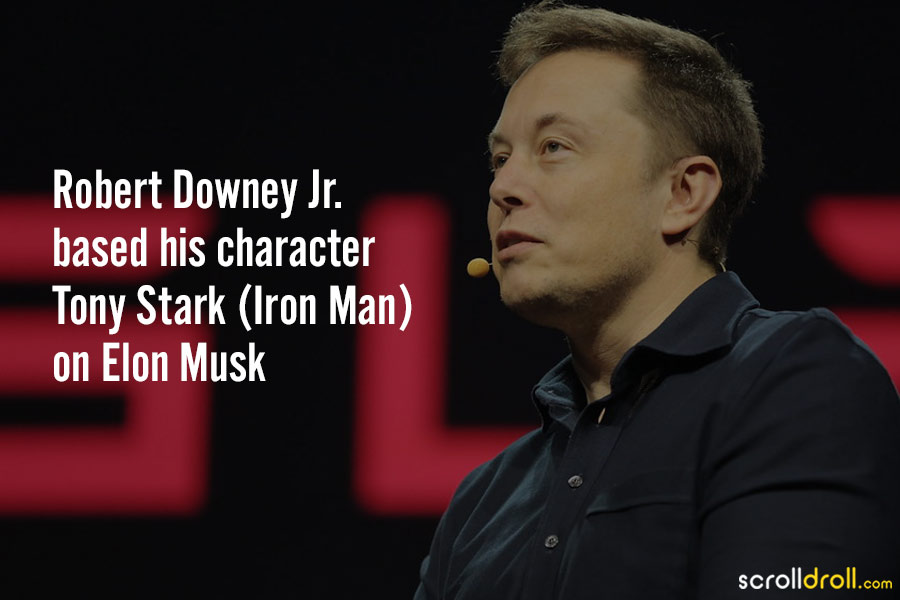 10. Musk started a school to teach his kids

At SpaceX headquarters, Elon Musk runs a school called Ad Astra, which is Latin for “to the stars.” Musk’s children, as well as the children of some SpaceX employees, attend the school. The non-profit school has been open since 2014, according to the technology website Ars Technica. According to a document filed with the Internal Revenue Service and first spotted by Ars Technica, Musk founded Ad Astra to provide his children with education that “exceeds traditional school metrics on all relevant subject matter through unique project-based learning experiences.” According to an Ars Technica report, the children work in groups and a strong emphasis is placed on math, science, engineering, and ethics. The school does not have a grading system. Despite the fact that the school only has 50 students, it is reported that 400 families applied in 2017. 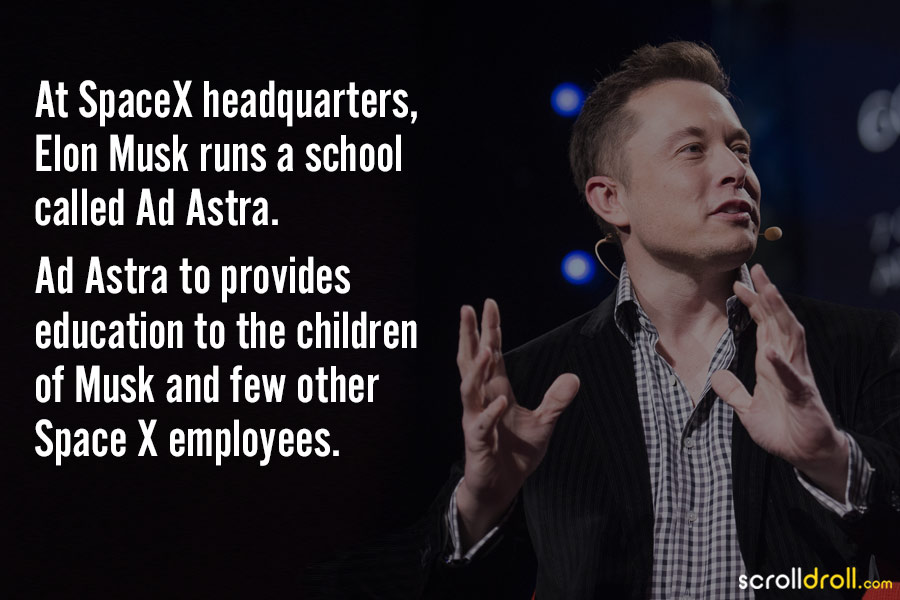 11. Musk is a fan of rapper Kanye West

Kanye West, the famous rapper, is said to have inspired the billionaire CEO. “Everyone in this room is inspired by you – who are you inspired by?” Musk was asked during a Q&A session at South by Southwest in 2018. “Obviously, Kanye West,” he stated. Musk has been praising Kanye West in public for years. He included a brief bio of Kanye West in Time magazine’s list of the 100 most influential people in 2015. 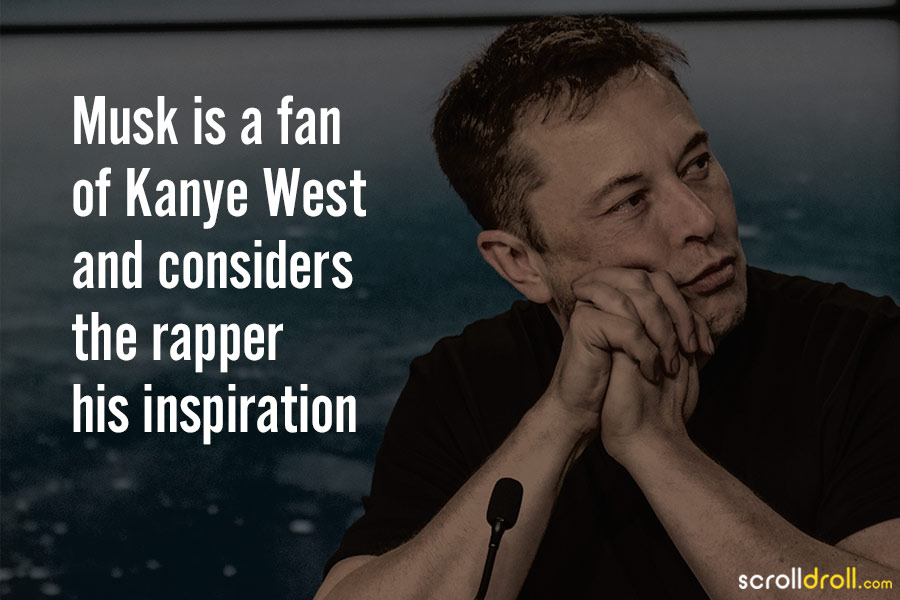 Musk was awarded the FAI Gold Space Medal in 2010 for designing the first privately developed rocket to reach orbit by the Federation Aronautique Internationale. 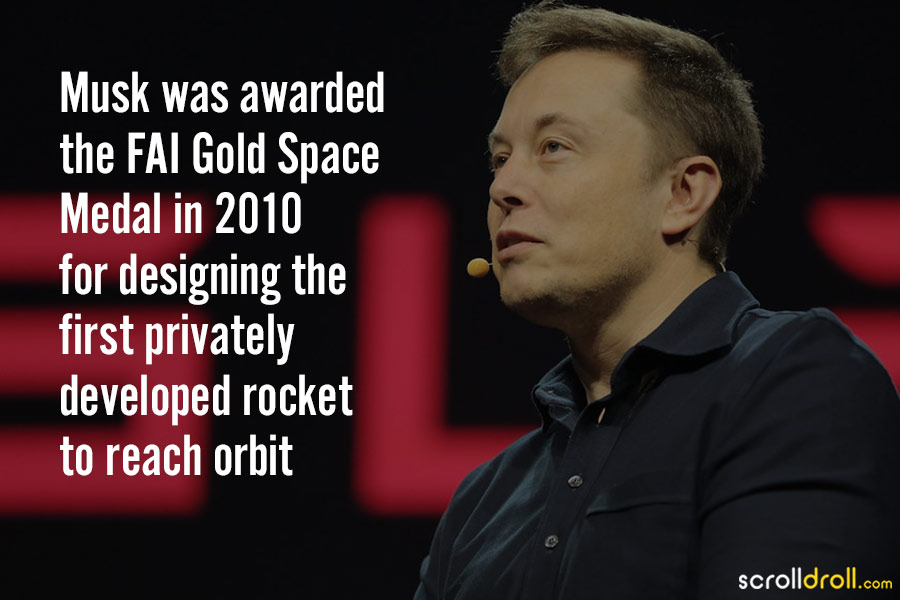 Musk unveiled the concept of Hyperloop in August 12, 2013, an extremely fast and cheap transportation system using a big vacuum-sealed tube or a system of connected vacuum-sealed tubes with very little air pressure and resistance. 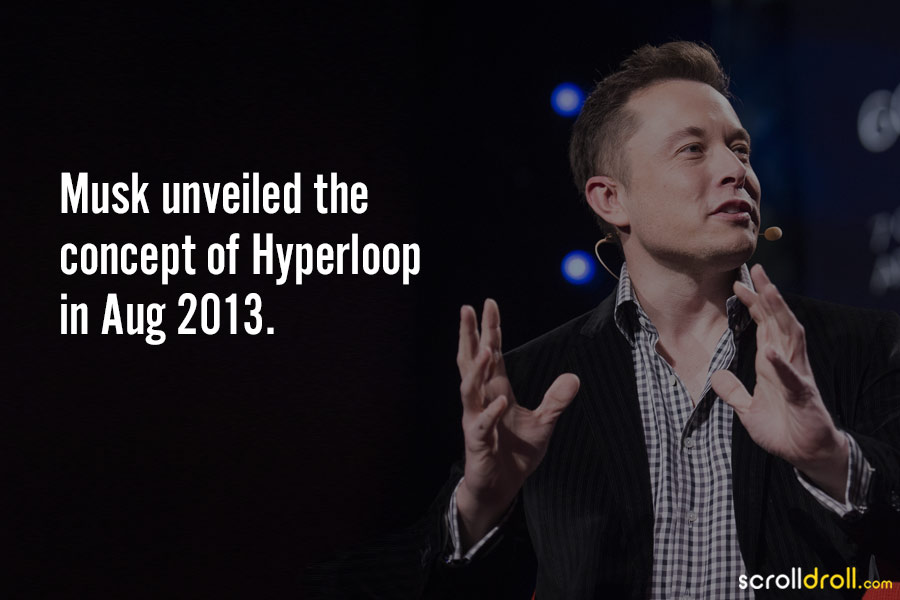 Musk is known as a thrillionaire, a high-tech entrepreneur who wants to make science fiction a reality. 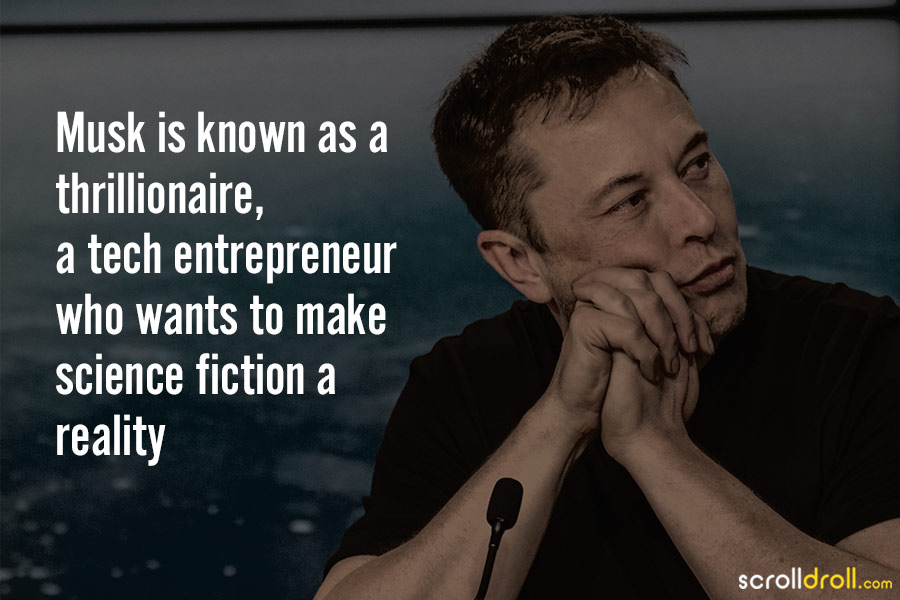 X.com, which later became Paypal was the source of Musk’s initial fortune. Musk co-founded X.com in 1999 which was later purchased by Ebay for $1.5 billion. Musk made around with $180 Million from this deal. 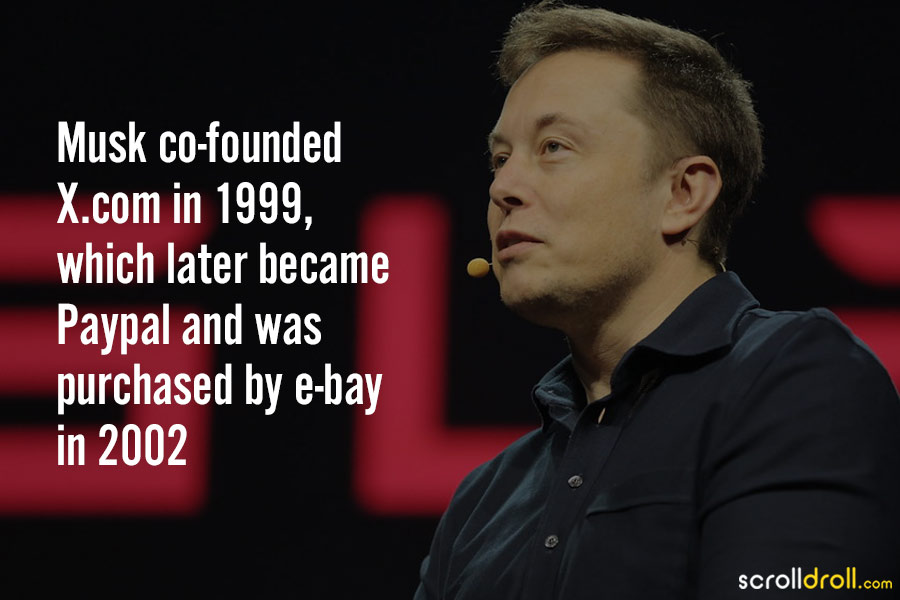 We hope you learned a lot from the top 15 interesting facts about Elon Musk, the alleged thrillionare. What are some of the lesser-known facts about the billionaire CEO? Let us know some of them in the comment section down below.

10 Best Hindi Dubbed Family Movies on Netflix To Watch Out