Several feminist female figures can be found in India’s rich history and heritage. From the goddesses to the women activists, scholars, and freedom fighters such as Maitreye Devi, Khara, Gargi Devi, Lopamudra Devi, Uda Devi, Rani Lakshmi Bai, Kittur Rani Chennamma, Sucheta Kriplani, Pritilata Weddedar, and Matangini Hazra, so many women have made significant contributions to India’s development. While patriarchal history would omit these names, the sports industry, which is also frequently associated with male sports icons, has made significant contributions by Indian female athletes. As a result, the impressive array of female sports icons has inspired a number of people, most notably women, to take sports more seriously while also generating discussion about women in sports.

Here are some of India’s top female athletes who have served as role models for many aspiring athletes. Take a look at the names on this list! 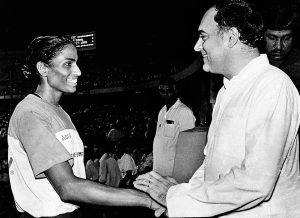 Not many Indian female athletes have achieved the level of celebrity that PT Usha has. PT Usha, also known as the “Golden Girl,” was born in Kerala and coached by O.M.Nambiar. She has been dubbed the “Queen of Indian Track and Field.” She has made her motherland proud by representing India in international competitions such as Asian Games, Olympic Games, and world championships. She was once quoted in an interview as saying that she had broken her own track and field record. She struggled in her early years due to a lack of resources, but she never gave up, and as a result, she was chosen to represent India by the authorities. 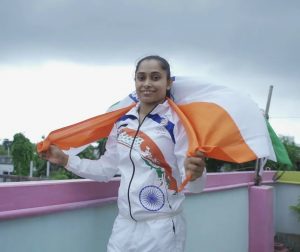 Dipa Karmakar is another of the top Indian female athletes. Dipa Karmakar, a renowned Indian gymnast who was born in Agartala, reached the pinnacle of success by representing India at a global level. She is one of only five notable female gymnasts to attempt Produnova, one of gymnastics’ most difficult vaults. She competed for her country in the Commonwealth Games in 2014, the Asian Gymnastics Championships in 2015, the World Artistic Gymnastics Championships in 2016, and the Olympics in 2016. She is the most promising gymnast India has produced to date, excelling in vault, pole, balance beams, and uneven bars. She has been awarded Padma Shri and Rajiv Gandhi Khel Ratna. Bireshwar Nandi is her coach. 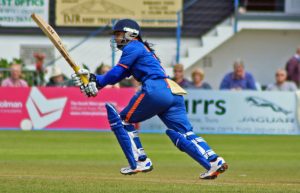 Mithali Raj is another sports legend who has shown incredible batting prowess on the cricket field and is widely regarded as India’s all-time favorite female cricketer. Mithali began playing the game when she was ten years old, growing up in a Tamilian family in Jodhpur. Mithali was coached and selected for participation in women’s one-day international matches, as well as the Women’s Twenty20 Asia Cup, where she made her mark with astounding skills that will be remembered in the history of cricket. Mithali became the first Indian woman to play 20 years of international cricket as a right-handed batswoman. Mithali will be remembered as one of the top Indian female athletes and sports icons, having won numerous awards and breaking records along the way. 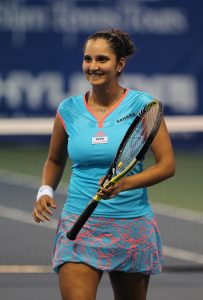 Sania Mirza, a Hyderabad native, is the all-time greatest tennis player, having won six Grand Slam titles in her career. Mirza is regarded as one of India’s highest-paid tennis players. Sania continued to win awards at various tournaments such as the Afro-Asian Games, Commonwealth Games, Asian Games, French Open, Wimbledon, Australian Open, US Open, and others until she retired from singles in 2013. Being one of the best Indian female athletes, she has received numerous awards and honors, including the Arjuna award, Rajiv Gandhi Khel Ratna award, Padma Shri, and inclusion in the BBC’s 100 inspiring women list, among others.

Mary Kom, who was born in Manipur in 1983, has struggled to achieve stardom in Indian sports. Mary Kom is the only woman to have won the world amateur boxing championship six times, and she has never shied away from a challenge. The life and struggles of this sports icon inspired Bollywood filmmakers to create a biopic, inspiring millions more. She competed in the Women’s Asian Confederation Boxing Championship, the Commonwealth Games, the Women’s World Boxing Championship, and the Summer Olympics. She is one of ten boxing athletes who will serve as ambassadors for the Tokyo Olympics. Mary Kom has established a boxing school in her hometown, inspiring every young girl to pursue a career as a boxer. She is a mother of twins and currently serves in the Rajya Sabha. 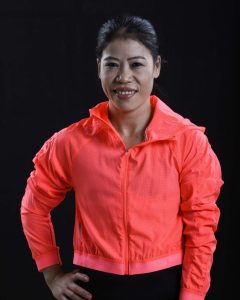 PV Sindhu, a 25-year-old badminton player, was born in Hyderabad to parents who play volleyball at the national level. Sindhu actively participated in and won several badminton tournaments after completing her college education, including the Asian championship, World championship, All England Open, India Open Grand Prix Gold, and Commonwealth games, to name a few. She reached the pinnacle of her career and won a silver medal for her country at the 2016 Olympic Games. She was appointed deputy collector in the Andhra Pradesh government’s land revenue department for the Krishna district. In March of 2020, she was named BBC Indian Sportswoman of the Year, and she was elected as the ambassador of the BWF committee’s ‘I Am Badminton’ campaign to promote clean and fair play in sports. The Arjuna Award, Rajiv Gandhi Khel Ratna, Padma Shri, and Padma Bhusan awards have all been bestowed upon this sports legend, making her one of the most desirable Indian female athletes. 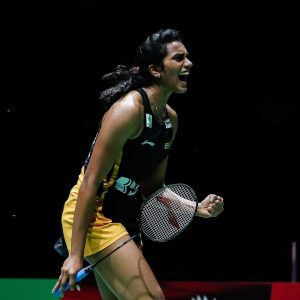 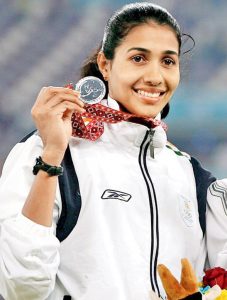 Anju Bobby George, who was born in 1977 in Kerala to a Syrian Orthodox family, has been a promising athlete since her school days, winning events such as the long jump and high jump. Anju won titles in the Commonwealth Games in 2002, Asian Games in 2002 and 2006, Asian championships in 2005, and South Asian Games in 2006. She received the Arjuna Award in 2002-2003, the Rajiv Gandhi Khel Ratna Award in 2003-2004, and finally the Padma Shri, India’s fourth-highest civilian award, in 2004. The rise of this sports legend from 6th to 61st place in the world athlete championship was the result of sheer dedication and perseverance. 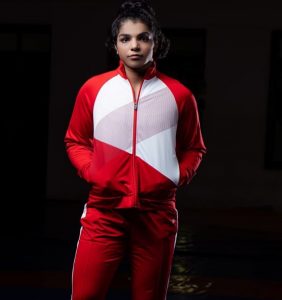 Sakshi Malik is a freestyle wrestler who represented India at the 2016 Summer Olympics and won bronze in the 58 kgs wrestling category. She was born in Haryana in 1992. She was a champion at the 2014 Common Wealth Games in Glasgow and the 2015 Asian Wrestling Championship in Doha. Saakshi was inspired to wrestle by her grandfather and coached by Ishwar Dahiya as a result. This sports legend competed in the Junior World Championships in 2010, winning bronze in the 58 kgs category. Sakshi is a member of the ‘Colors Delhi Sultans’ and a #EveryWomanStrong campaigner.

Hima Das, also known as the ‘Dhing Express,’ is an Assamese sprinter who set the national record for 400 meters in 50.7 seconds at the 2018 Asian Games in Jakarta. She is one of the first Indian female athletes to win a gold medal in a track event at the IAAF World U20 Championships. Hima Das, the youngest daughter of her farmer father, showed early on that she was a natural runner. She used to play football with the boys in her village, but she eventually switched to sprinting. Her high school teacher advised her to switch her focus to sprinting. In 2018, the President of India bestowed the Arjuna Award on this sports legend. Hima Das defied the odds by making India proud despite her humble beginnings and general lack of opportunities. 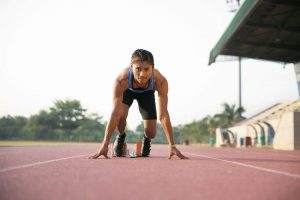 Dutee Chand, a sprinter, was born in 1996 and aspired to be a national athlete like her sister Saraswati Chand. She competed in the 2016 Summer Olympic Games and the 2018 Asian Games in Jakarta. She became the first Indian sprinter to win gold at the World Universiade in 2019, running the 100 meters in 11.32 seconds. She is a member of the LGBTQ+ community who has openly discussed her sexuality in 2019. When it was discovered that her testosterone levels were higher than a normal female’s due to a clinical condition known as hyperandrogenism, she was surrounded by controversy and was dropped from the 2014 Olympic Games. Fellow Indian female athletes rallied behind this sports legend, and she competed in the 2017 Asian Championship, making India proud. 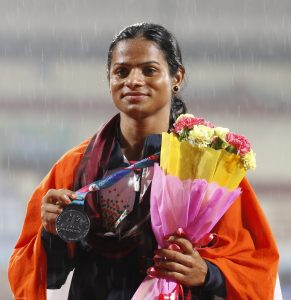 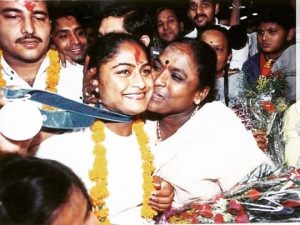 In the Sydney Olympics of 2000, Karnam Malleswari became the first Indian woman to win a medal. In 1994, she won the World Championships, the Asian Weightlifting Championships, and a total of 29 international medals, including 11 gold. Karnam came from a conservative family where girls were never encouraged to participate in weightlifting. In an interview, this veteran athlete recalled how everyone was surprised to see Indian female athletes win Olympic medals. 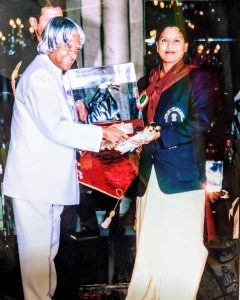 Bula Chowdhury, who was born in West Bengal in 1970, swam against the tide of time and poverty to become the world swimming champion, bringing honor to her country. Bula showed exceptional swimming talent since childhood and was selected by her coach, who prepared her for a brighter future. Bula gradually rose through the ranks, winning national, international, and even English Channel swimming titles before retiring in 1989. Bula, a recipient of the Arjuna Award, the Padmashri Award, and the Tenzing Norgay lifetime adventure sports award, rose from poverty to success. This sports legend entered politics in 2006 and was elected to the Legislative Assembly. 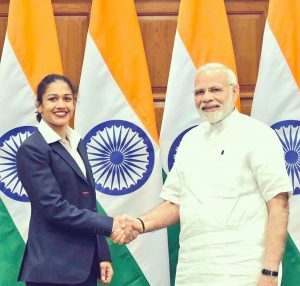 Babita Phogat, the Indian wrestling champion who won titles in the 2010 Common Wealth Games, 2014 Common Wealth Games, and 2018 Common Wealth Games, has won the hearts of many. Mahavir Phogat, her father, was a constant source of inspiration and mentoring for her. ‘Dangal,’ a popular Aamir Khan film, is based on her life and struggles. Several Indian female athletes were inspired by the success of this sports icon to enter the wrestling ring, which is dominated by male wrestlers. 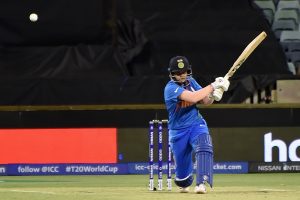 Shafali Verma stepped into the world of International Women’s Cricket at the tender age of 15 when she was asked to fill in for Mithali Raj after she announced her retirement from T20 Internationals. She was inspired by Sachin Tendulkar’s brilliant performances. The Rohtak, Haryana-born teenager was called up to the Indian squad following a successful domestic season in which she scored over 1900 runs. Shafali has already cemented her place in India’s batting order at the age of 15. Mithali Raj and England batswoman Danillie Wyat have both praised her for her uncompromising hard-hitting style of play, with the latter referring to her as “a superstar in the making.” Shafali Verma is on her way to becoming one of the well-known Indian female athletes. 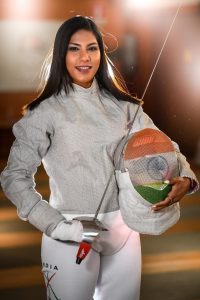 So, here were the top 15 Indian female athletes who have made our country proud. Did their stories inspire you to follow your dreams? Let us know down below.